Smoking is well known to be the main cause of lung cancer, which is the number one cause of cancer related death worldwide (1,2). Lung cancer screening with low dose computer tomography (CT) can achieve early detection at a stage where curative treatment still is possible (3). The National Lung Screening Trial (NLST) with 53,452 participants screened current and former smokers with a smoking history of 30 pack years or more in USA (4). The NLST study is the first study that has demonstrated a significant 20% lung cancer mortality reduction and because of this national screening program is underway in the US (5) and is being considered in Europe (6). However, the overall success of lung cancer screening programs may be significantly influenced by any direct effect of screening on smoking behavior of the screened participants and therefore this should also be investigated.

This review focuses on smoking behavior and on predictors for smoking cessation in relation to lung cancer screening with low dose CT.

License to smoke or teachable moment?

On the other hand, some studies have suggested that enrolment in screening may prove to be a teachable moment where the participants can be informed of the harmful effects of smoking and from this increase their motivation to quit smoking (8,9).

To investigate the causal effect of lung cancer screening on smoking habits the best method is therefore to assess the smoking behavior in randomized settings.

Since the NLST study was published, a number of randomized European trials have also investigated the effect of lung cancer screening (6,10,11). The aim of these studies was mainly to investigate if the mortality reduction from the NLST could be reproduced. Only two European studies also investigated the smoking habits of the participants enrolled in randomized screening trials. The Dutch-Belgian screening study (NELSON) (12) and the Danish Lung Cancer Screening Trial (DLCST) (13) have both published their analysis of the effect of screening on smoking habits. The NELSON study investigated a cohort of only male participants (12), and the DLCST is the only known study, which included all participants of both sex during all its five screening rounds (14). When analyzing smoking habits it is important to validate the smoking habits biochemically. In the DLCST this was done by analysis of carbon monoxide (CO) levels in exhaled breath. Subjects with a CO-level above 10 ppm were regarded as current smokers (13).

DLCST was the first to publish its results regarding smoking habits after one year of screening in 2012 (13). The DLCST participants were randomized into two groups, one that was screened with low dose CT (screening group, n=2,052) and one group receiving no screening (control group, n=2,052). In both groups brief smoking cessation counseling was given by trained nurses but no active pharmacological or other smoking intervention was done. Thus, this design allowed a direct evaluation of the effect of CT screening on smoking habits by comparison between the two groups. The DLCST found no significant overall difference in smoking quit rates (P=0.49) between the screening group [11% (174/1,545)] and control group [10% (165/1,579)] after 1 year of screening. However, as 17% (85/507) of the ex-smokers in the CT-group and 21% (98/473) (P=0.11) of the ex-smokers in the control group relapsed to smoking, the net smoking quit rate was 6% (13). Thus, CT-screening by itself did not increase quitting compared to the control group. That 11–12% in both groups did quit smoking could be an effect of the brief smoking cessation counseling, combined with the fact that this group of smokers volunteering for a CT screening trial might be more motivated to quit than the background population.

Later in 2014 the DLCST published its analysis of all its five screening rounds (14), and the conclusion was the same, that no significant difference in smoking behavior was seen between the screening and control group. CT-screening did not induce smoking nor did it promote smoking cessation when compared to the control group. But overall in both CT and control group ex-smoker rate increased from 24% at baseline to 37% at fifth screening round after 4 years [Figure 1, (14)]. Apparently, participation in a screening trial by itself promoted smoking cessation in both groups. One main problem that may introduce bias in smoking habits analyses is missing values concerning smoking status mainly in subject’s lost-to follow-up. Normally like in the DLCST (13,14) such subjects should be regarded as current smokers in the analyses as most of these subjects are current smokers. 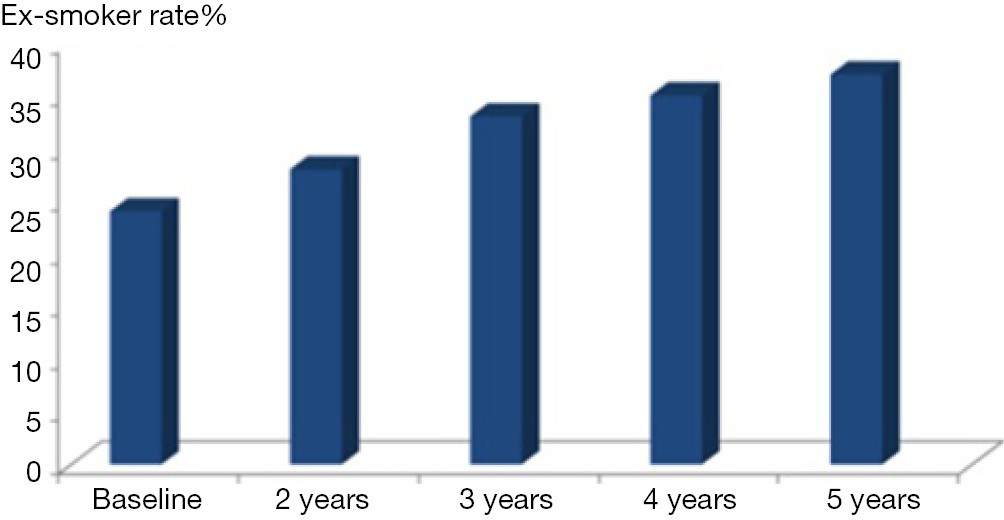 Figure 1 Development of ex-smokers rate in % during the Danish Lung Cancer Screening Trail.

Data regarding smoking has recently been published from a sub-population of the NLST, i.e., in 18,840 subjects out of 53,452 participants (15). Although this is a randomized controlled trial with ordinary chest X-ray in the control group, they did not report smoking data for the control arm. The annual point prevalence quit rate during 5 years ranged from 11.6% to 13.4%.

Overall, the above 3 large cohort studies reported change in smoking prevalence in the same range as in the 2 randomized, controlled trials [DLCST (13,14) and Nelson (8)]. It’s important to underline that this decline in smoking rate most probably is not due to the CT-screening per se but instead an overall effect of participation in screening trials, and the selection bias induced by comparing quit rates in a highly motivated screened population with quit rates in the background population.

One might suspect that there could be a differential effect from a negative (i.e., normal) or a positive CT-scan result on smoking habits. Positive CT-scan results might “scare” subjects and get them to quit smoking and decrease relapse in ex-smokers. Here randomized controlled trials and cohort studies may be of similar validity.

In the NELSON trial, a significant higher number of quit attempts was reported in participants receiving a positive screening result (13).

These findings are also consistent with the analysis of smoking habits in the large NLST study cohort of smokers and found reduced smoking rate in participants with positive screen result. NLST results also showed a strong dose-response in increased smoking cessation as screening results became more serious or suspicious for lung cancer (17). In the NLST study the first positive scan increased abstinence significantly with a HR of 1.28 (95% CI, 1.13–1.35) and with a 1-year abstinence rate of 15.9% (n=1,869 quitters) vs. 12.7% (n=723 quitters) after a second positive scan (P=0.04). They name the positive scans “false positive scans” as all the lung cancer cases were excluded from the analysis (13). For recent ex-smokers (or recent quitters), i.e., subjects that quit smoking within the last 6 months a positive scan was associated with less likelihood of relapse with a HR of 0.72 (95% CI, 0.54–0.94). The proportion of recent quitters that relapsed the year following a positive screen was 40.8% (n=120) compared with 10.8% (n=37) in subjects with a second positive scan (P<0.001). Among longer-term quitters there was no relation with positive screen results and relapse (16,17).

In the DLCST Fagerstroem first Questionnaire Q1 (“How soon after you wake up do you smoke your first cigarette?”) was used to evaluate smokers’ nicotine dependency (High dependency = early first cigarette) (13). Lower Fagerstroem dependency and higher motivation to quit at baseline predicted smoking status both after 1 year of screening and at the end of 5-year screening program (13,14). In the NLST study 74% of the smokers reported one or more quit attempts during the study period underlining that the majority of participants in these programs in fact try to quit smoking. A genetic study, which also included DLCST participants, found gene sequence variants associating with smoking behavior and with nicotine metabolizing enzymes (18). This may open for future genetic profiling of smoking behavior and from this design targeted smoking cessation intervention. Targeted smoking cessation of screening participants with high dependency could be a beneficial approach. This could be done by using pharmaceutical smoking cessation drugs combined with counseling for high dependent participants and a motivational approach for those subjects low in motivation to quit (19).

Recent data from a subgroup of the NLST in 3,336 quitters and continued smokers (20) reported that primary care providers with respect to smoking cessation support only partially followed the 5As recommendations [i.e., ask about smoking (77%), advise to quit (76%), assess smoking status (63%), assist (56%) and arrange follow-up (10%)]. There was no effect on smoking abstinence from “ask”, “advise” and “assess” but “assist” increased odds of quitting with 40% and “arrange follow-up” increased odds of quitting with 46% (16). Thus, clinicians should intervene more actively in smoking cessation in the future screening trials especially with focus on assisting smokers to quit (talking about quitting and recommend smoking cessation drugs and/or counseling) and arrange follow-ups.

Overall, CT screening for lung cancer in itself does not result in smoking cessation (14). However, apparently participants in these programs are more motivated to quit smoking than the general background population, resulting in an overall quit smoking rate of approx. 10–13% during 4–5 years unrelated to the exposure to CT scanning (13,14). There is some evidence that positive CT screening test results are associated with short-lived increases in quitting smoking and in reducing relapse in recent quitters with no consistent long-term effects (13,14).