On page 176 of the volume 363 of Cancer Letter, Zheng and colleagues described the incidence, mortality and survival of childhood cancer in 2010 and their trends during 2000-2010 period in China mainland (1). This is a population-based study with a large number of sample size, including approximately 158 million population based on 145 (out of 219) Chinese cancer registries. Although not all registries were included, the potential implications of such an epidemic description on childhood cancer in a rapidly developing large country of China are huge. It would help the health department to make new policies and strategies on the prevention and control of childhood cancer in response to this emerging public health concern.

Childhood cancer (aka pediatric cancer) generally refers to cancer diagnosed in a child aging under 15 years old (from birth to 14 years inclusively) (2). Childhood cancer is a cause of children death just behind accidents, although it only represents between 0.5% and 4.6% of all cancers in human (3,4). Leukemia, brain tumor and lymphoma are the top three most common cancers in children, followed by less common cancers, e.g., bone, Wilms’ tumor (kidney) (1,5). Table 1 summarizes the overall incidence of childhood cancer in several different areas and/or countries with different incomes. Across the world, overall childhood cancer incidence rates range from 45 to 200 per million children. Although Uganda has a higher incidence even than developed countries, on average, the more developed countries have a higher incidence rate of childhood cancer than the less developed countries. A higher incidence of childhood cancer shown in Uganda is the most likely due to epidemic HIV infection, which has been demonstrated in association with several human cancers, such as Kaposi’s sarcoma (17,18). On the other hand, the incidence in low-income countries may have been underestimated, since many childhood cancers are not diagnosed, or are missed to be reported due to unavailable registry system (4,16). This underestimation may also happen in the rural area of China, leading to a higher incidence rate in urban than in rural area of China as reported by Zheng et al. (1). Substantial inequality of medical resources exists in China; some medical students after graduation would like to stay in big cities even with unemployment status rather than serve in the rural area, particularly the areas with poor economy. 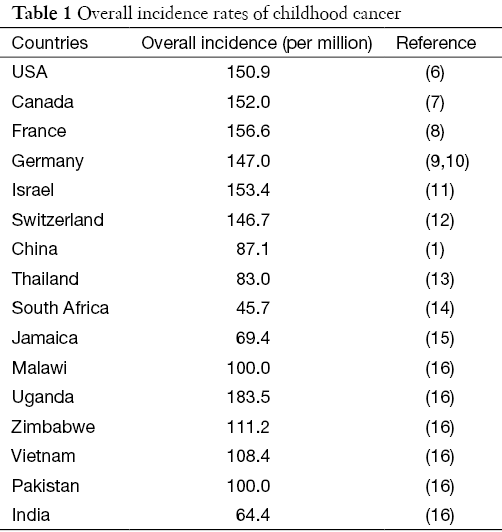 Zheng and colleagues also reported that the average annual percent change (AAPC) of incidence rate in China was 2.8% [95% confidence interval (CI), 1.1-4.6%]. It is larger than that before early 1990s in the USA (0.6%) and Europe (1.1%); and the incidence rates of childhood cancer in western countries have been shown stable since early 1990s (19-22). Improvement in diagnosis and treatment in China may be a reason to explain the rapid increase of AAPC. Another possibility may result from the environmental pollution, including air and water pollution, as well as food safety as an adverse consequence of rapid economy development in China in past decades. This postulation may also be supported by the evidence shown in Zheng et al.’s study (1) that children living in rural area had a lower incidence of childhood cancer than those living in cities.

Ethnicity is another known risk factor of childhood cancer. Higher incidences of most types of childhood cancer are observed in Caucasian children in the US than in African, Asian and Hispanic children (23,25). In some types of childhood cancer, ethnic effect shows dramatic. For example, very few cases of Ewing sarcoma in African and Asian children, and Hispanic children show 10% higher incidence of acute leukemia than Caucasian children (23). It will be interesting to investigate whether there is any disparity across ethnicities in China, however, Zheng et al. did not further analyze the data based on race. It is unclear whether the information on race in Chinese cancer registries is available or not. Elucidation of ethnic disparity will be helpful in dissecting the role of genetic and environmental factors in childhood cancer.

Genetic factor and congenital disorders are known to associate with approximately 5-10% of childhood cancer, although the proportion of some rare cancers, such as pediatric adrenocortical carcinoma, can be higher and up to 80% of the cases carry germline TP53 mutation (26). The effect size of genetic variants in childhood cancer is usually much larger than in adult cancer, making several genome-wide association studies (GWAS) successful for childhood cancers that are relatively rare, such as Wilms’ tumor, Ewing’s sarcoma, and osteosarcoma, neuroblastoma and acute lymphoblastic leukemia (ALL) (27-31). The findings in GWAS not only show that most of phenotype-associated variants are shared across races (32), but also elucidate why some childhood cancers have a substantially higher incidence in one race than others (33). For instance, the frequencies of ALL-associated ARID5B rs10821936 are 33% in Caucasians, 24% in African-Americans, and 47% in Hispanics; and this difference may explain the lower incidence of ALL in African-Americans but higher in Hispanics (33). One pitfall of GWAS is that only common variants are included, missing rare variants with minor allele frequency (MAF) less than 0.01. However, high density GWAS available and a very large numbers of subjects easily obtained in China make it possible for researchers to analyze the effect of contiguous homozygous segments (runs of homozygosity), which are associated with rare diseases (34), on childhood cancer. Next-generation sequencing (NGS) platform and family-based study may be helpful in defining the missing genetic risk, since it is estimated that GWAS-identified common variants only explain approximately 24% of genetic variation in ALL risk (35). In addition, with the price of NGS dramatically declines, this platform will be widely applied in exploring novel rare genetic variants and their associations with human diseases including children cancer. The era of big data is on the corner, and bioinformatics and new statistical analysis methods for data mining on high dimensional data are on demand. Infrastructures and securities for big data storage are also challenging. Moreover, functional studies on identified phenotype-associated variants are another promising post-genomics topic, such as how variants affect the structure of DNA, RNA and chromatin (36,37), how variants affect RNA splicing and translation (38,39), how variants affect protein structure, modification and protein-protein interactions (40,41), and how variant-variant or gene-gene interacts or synergistically interplays (42-44).

In conclusion, Zheng et al.’s study provides important information on the incidence, mortality and trends of childhood cancers in China mainland, which may help governments and policymakers to take active measurements in the prevention and control of increasing childhood cancers. This study also can emphasize the importance of comprehensive registries in the prevention and control, promoting to pay attention to disease registry regulation and the quality control of the registries across the country.