Asthma, a heterogeneous disease characterized by a chronic inflammatory pulmonary process, affects 1–18% of the population in different countries (1) and is a major chronic noncommunicable disease addressed by the World Health Organization in the Thirteenth General Programme of Work 2019–2023 (2). It has recently been reported that asthma affects 45.7 million adults in China (3). Meanwhile, the prevalence of childhood asthma in China is also increasing rapidly, with the 2000 and 2010 national statistics showing the cumulative prevalence in children under 14 years of age to be 1.97% (4), and 3.02%, respectively (5). Allergens, especially inhaled types, are detrimental for asthmatic children. The house dust mite (HDM) is one of the most common inhaled allergens worldwide, with Dermatophagoides pteronyssinus (Der P) and Dermatophagoides farina (Der F) being the major strains. Previously reported research established that HDMs are the major aeroallergens among allergic rhinitis (AR) patients in central China, with a sensitization rate of over 90% (6). Although the incidence of allergic asthma in children increases, the immunoglobin E (IgE) molecular sensitization profile of allergic asthma remains underreported.

The treatment of asthma mainly includes inhaled glucocorticoids, β2-receptor agonists, and leukotriene receptor antagonist. Current therapies can effectively control symptoms but do not affect the underlying, dysregulated immune response. In recent years, some new and targeted therapies have emerged, such as anti–immunoglobin E (IgE) antibody (omalizumab) and anti-interleukin 5 (IL-5) antibody (7). Although omalizumab is safe and effective, it is expensive, and there are no current guidelines for discontinuation (8). Allergen immunotherapy (AIT) is an alternative therapy in patients with allergic asthma, and there is evidence that the application of AIT in this population can achieve substantial reductions in short-term symptoms and medication scores (9). AIT currently represents the only approach capable of modifying the immune system to provide beneficial effects that persist for years after treatment is discontinued (10). A randomized clinical trial found that a HDM sublingual AIT tablet was effective in adults with allergic asthma (11). AIT has a unique immunological rationale, since this approach is tailored to the specific IgE spectrum of an individual and modifies the natural course of the disease. In this respect, AIT has to be presently considered a prototype within precision medicine (12). Unfortunately, however, AIT does not work for everyone, and has a reported efficacy rate of 50.7–71%, with a considerable number of patients failing to respond (13-15). In addition, AIT requires 3–5 years to complete the course of administration, which can be intolerably long for the patients, and thus selecting suitable patients (which will likely to comply) is critical to the effective application of this approach. Previous studies have shown that the level of total IgE (tIgE) and IgE-specific activity (sIgE/tIgE) can predict the efficacy of AIT, such that, lower the tIgE, the larger the sIgE/tIgE, the better the efficacy (13,14).

The aim of this study was thus to investigate the IgE molecular sensitization profile of allergic asthma in children in order to provide guidance for the prediction of AIT efficacy. We present the following article in accordance with the MDAR reporting checklist (available at http://dx.doi.org/10.21037/atm-20-7314).

The study was conducted from August 2018 till March 2019 in the Respiratory Department of the Children’s Hospital of Chongqing Medical University. The study was approved by the Institutional Review Board of Children’s Hospital of Chongqing Medical University (file no. 2018-02), and each participant’s statutory guardian signed the informed consent. All procedures performed in this study involving human participants were in accordance with the Declaration of Helsinki (as revised in 2013).

Patients enrolled in our study were those who, (I) were diagnosed with allergic asthma based on the recommendations of the Global Initiative for Asthma guidelines (http://ginasthma.org/), (II) showed positive skin prick tests (SPTs) to Der p or Der f of “+++” or above, (III) and were aged 6–18. The exclusion criteria were those with (I) with heart, lung, liver, kidney, or other organic diseases; (II) with bronchial foreign bodies, tuberculosis, or other lung diseases; and (III) those who had previously received AIT. All patients were evaluated by a physician face-to-face with a detailed questionnaire to establish demographic characteristics, a family history of allergic diseases, other history of allergic disease, cigarette exposure, mode of delivery, and body mass index (BMI).

All the data were analyzed by Graphpad Prism 7. Descriptive parameters, including means and standard deviations for normally distributed continuous data, frequencies, and percentages for categorical data, were calculated. Pearson’s χ2 test or Fisher’s exact test was used to determine the association between categorical variables. The Mann-Whitney U test was used to compare numerical data between groups, while Spearman’s rank test was used to assess correlations. 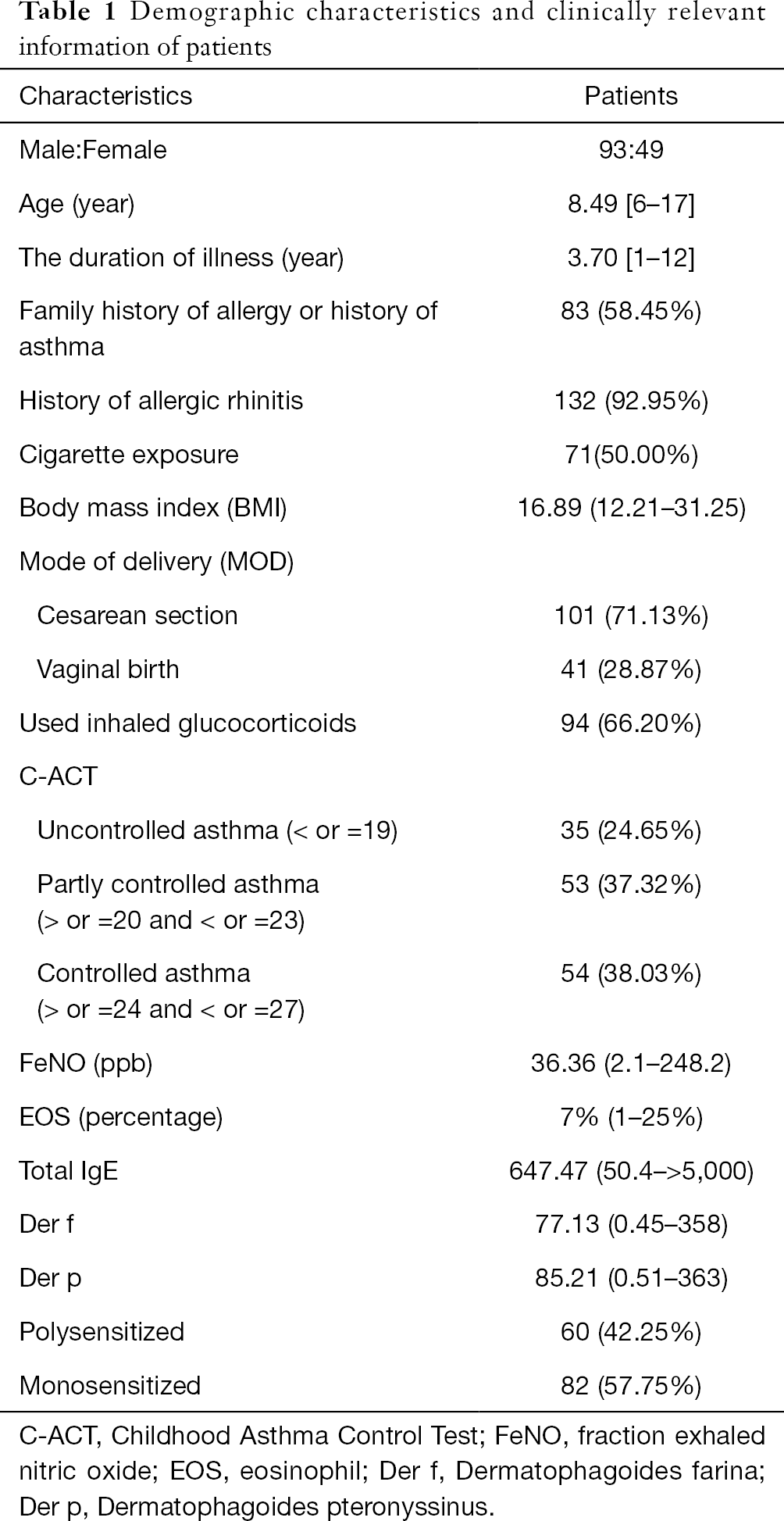 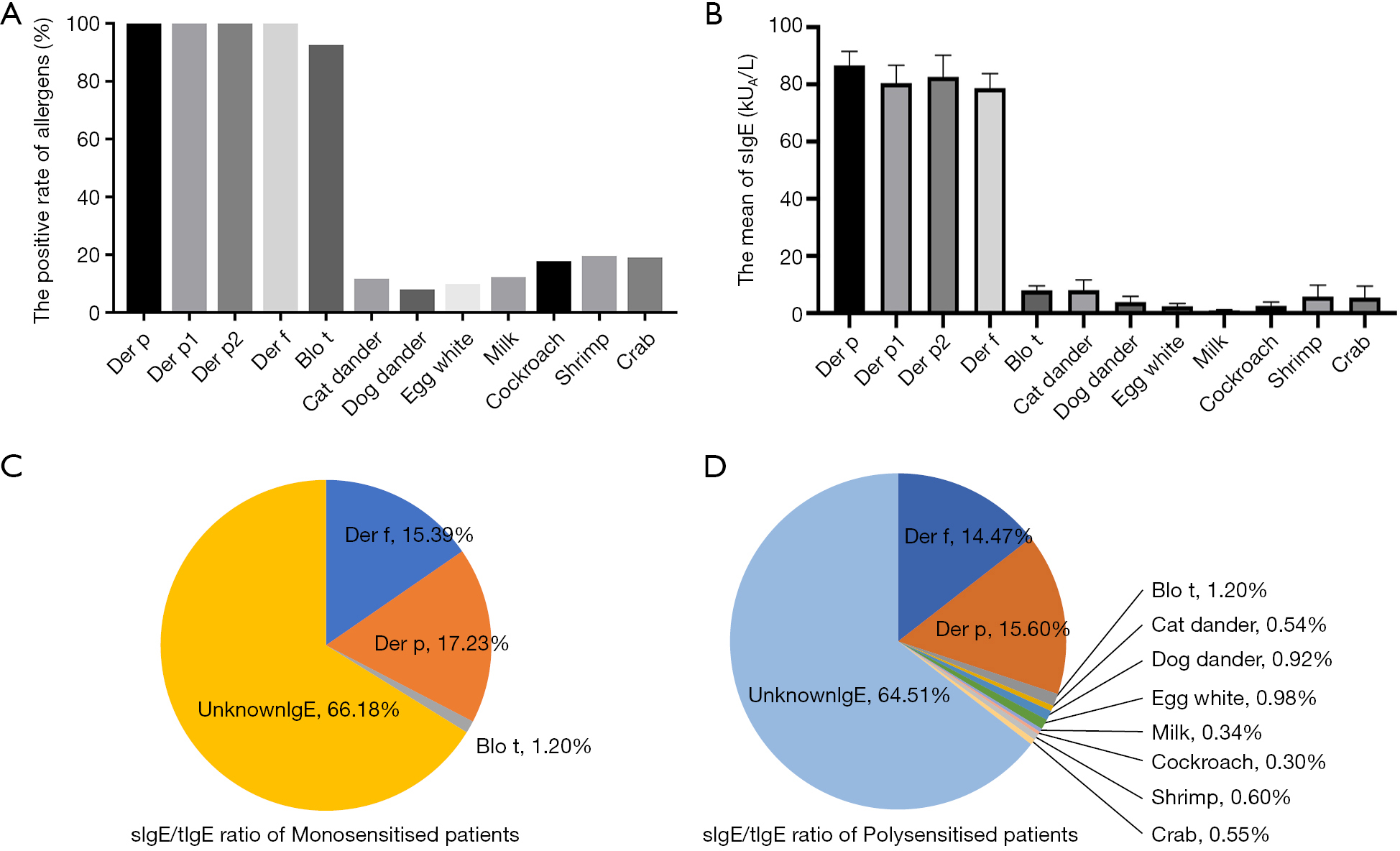 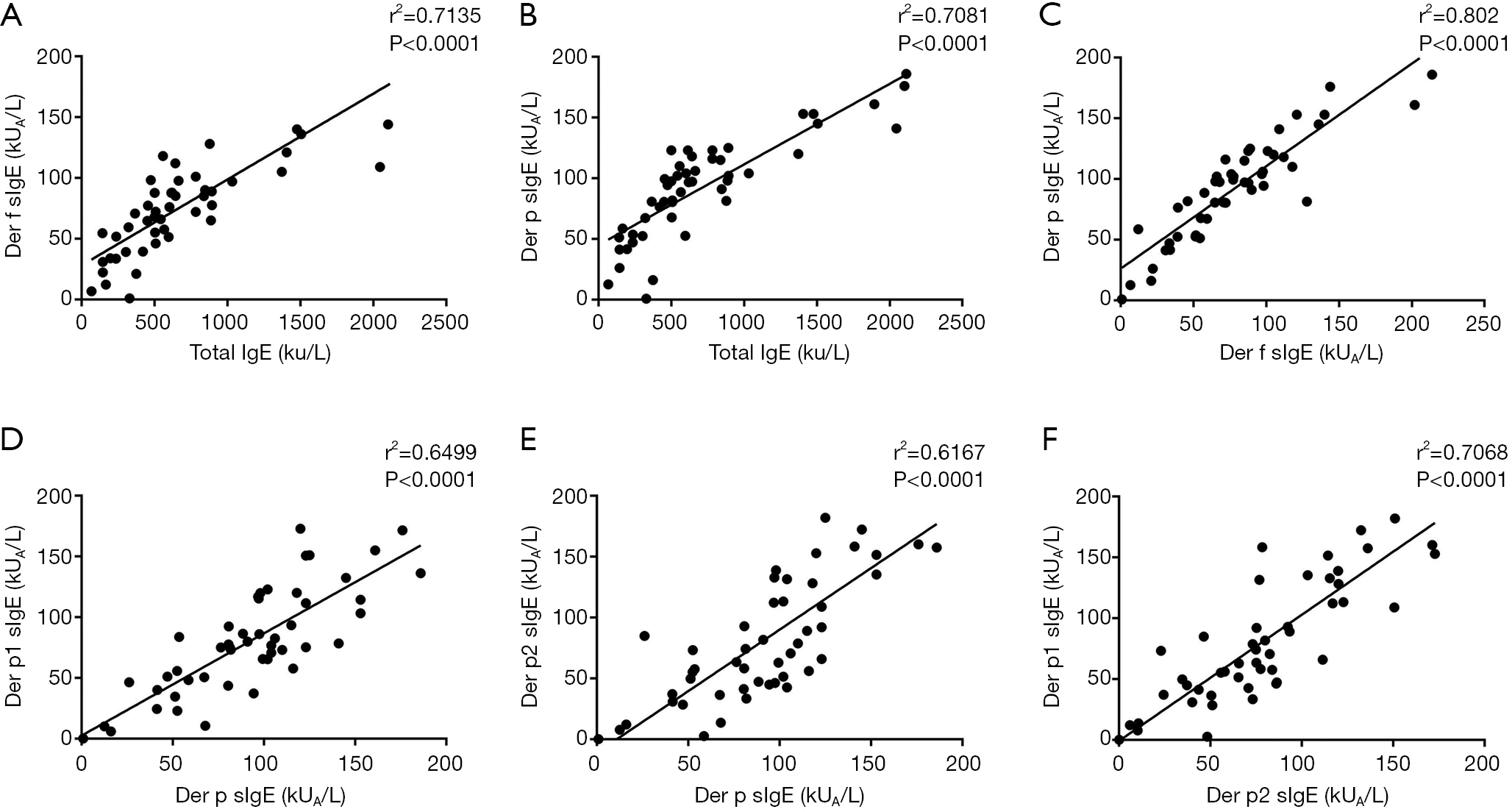 The levels of total IgE, unknown IgE, and sIgE, and the sIgE/tIgE ratio in patients with and without a family history of allergy

The HDM is the most prevalent allergen in patients with asthma and/or rhinitis in China (17). In this study, asthmatic children with dust mite SPTs of “+++” or above were enrolled. Among the 142 child patients allergic to dust mites, 93 were male (65.49%). Sex-related differences in asthma prevalence are well established and change through the reproductive phases of life. As children, boys have an increased prevalence of asthma compared to girls. Atopic asthma prevalence during childhood is typically higher in males compared to females (18-20). In this regard, our study is consistent with previous studies. Family history of allergy or history of asthma strongly influences asthma risk in children, as London et al., have shown that parental history of asthma and allergy is most strongly associated with early onset persistent asthma (21). Another study revealed that a family history of asthma and allergic diseases is a strong determinant of asthma (22). In our study, 58.45% of patients had a family history of allergy or asthma, which further supports the role of family history in the development of allergic asthma. AR and asthma are common diseases that frequently occur together, and, as they are both IgE-mediated diseases, they are triggered by similar allergens and have interrelated inflammatory and pathophysiological mechanisms. In our study, 92.95% of the allergic asthma patients suffered from concomitant AR. In fact, the co-occurrence of AR and asthma has been defined as combined allergic rhinitis and asthma syndrome (CARAS), and fits with the “one airway, one disease” concept of this condition. AR and asthma are characterized by upper and lower airway inflammation, respectively, with the genesis of both diseases being similar. As they are triggered by the same etiological agents, these phenomena co-occur, have the same inflammatory cell profile, and share the same therapeutic treatment (23).

We found that the positive rates of Der p, Der f, and Blo t were 100%, 100%, and 91.84% respectively, while the positive rates of other inhalation allergens such as cat dander, dog dander, and cockroach were all lower than 20%. Therefore, dust mites are the main allergen in children with allergic asthma. Meanwhile, the allergens affecting asthma patients can also include food allergens, such as egg white, milk, shrimp, and crab, which are the most common food allergies in children. Unfortunately, we did not measure sIgE for pollens, and we will complete pollen-specific IgEs detection in future studies. It is reported that IgE contains allergen-specific IgE, virus-specific IgE, bacteria-specific IgE (24), and allergen-specific IgE which can be detected, and so unknown IgE contains virus-specific IgE, bacteria-specific IgE, and some allergen-specific IgE which cannot be detected by current testing methods. However, because of the limitations of technology, the exact components of unknown IgE remain unclear. We found that both monosensitized and polysensitized patients, unknown IgE accounted for more than 60% of the tIgE, So the study for the exact components of unknown IgE may be beneficial for asthma, and that may be the direction of future efforts.

Our study also found that the level of total IgE had a close correlation with the level of Der p and Der f sIgE. This is in line with reports from other studies (25-26). Furthermore, sIgE levels of Der f and Der p, along with serum IgE for Der p1 and Der p2 and the serum IgE for Der p were also highly correlated. Our study suggests that for the detection of Der p1 or Der p2, sIgE may be a suitable tool with sufficient diagnostic accuracy for use in the diagnosis of Der-p IgE sensitization. This was also found in a report from Central China (25). More importantly, the close correlation between serum IgE titers and Der p 1 and Der p 2 is in line with reports by Wang et al. in Easter China (26).

In summary, this study was the first to analyze and report the IgE molecular sensitization profile of allergic asthma among children in China. We found that dust mites are the main allergen in children with allergic asthma. Our findings indicate patients with no family history of allergy and monosensitized patients have a higher ratio of sIgE/tIgE, and those patients may benefit more from AIT.

Funding: This study was sponsored by National Clinical Research Center for Child Health and Disorders (Grant No.: NCRC-2019-GP-06) and Chongqing Municipal Science and Technology Bureau (The central government guides development of local science and technology fund).

Reporting Checklist: The authors have completed the MDAR reporting checklist. Available at http://dx.doi.org/10.21037/atm-20-7314

Conflicts of Interest: All authors have completed the ICMJE uniform disclosure form (available at http://dx.doi.org/10.21037/atm-20-7314). The authors have no conflicts of interest to declare.

Ethical Statement: The authors are accountable for all aspects of the work in ensuring that questions related to the accuracy or integrity of any part of the work are appropriately investigated and resolved. The study was approved by the Institutional Review Board of Children’s Hospital of Chongqing Medical University (file no. 2018-02), and each participant’s statutory guardian signed the informed consent. All procedures performed in this study involving human participants were in accordance with the Declaration of Helsinki (as revised in 2013).