Fertility-sparing management of low-grade endometrial stromal sarcoma: analysis of an institutional series, a population-based analysis and review of the literature

Endometrial stromal sarcoma (ESS) is a histologic subtype of uterine sarcoma which accounts for approximately 38% of them (1). It is a rare, indolent uterine malignancy and comprises only 0.2% of all uterine malignancies (2). In 2014, WHO classification divides ESS into three categories: low-grade ESS (LGESS), high-grade ESS (HGESS), and undifferentiated endometrial sarcoma (3) based on different pathologic features.

LGESS is more common than the other two types, in other words, it is the second most common malignant mesenchymal tumor of the uterus (4). It usually affects young women, occasionally occurs in adolescents (5). Those young patients have paid extensive attention on their fertility preservation. LGESS usually exhibits an indolent behavior, nearly 80% of patients presenting with stage I disease (6) and its 5-year disease-speciﬁc survival (DSS) is approximately 90% for stages I–II and 50% for advanced stages (5). No matter which stage the patient was, half of them will recur, and the recurrences are more likely to delayed, the median duration between diagnosis and recurrence was 65 months (6).

Considering that the majority of LGESS express estrogen receptors (ER) and progesterone receptors (PR) (7), the mainstay treatment for LGESS consists of total hysterectomy and bilateral salpingo-oophorectomy (TH/BSO), chemotherapy, radiotherapy and endocrine therapy which might have a role in advanced and recurrent disease (8,9). Taking into account the good oncologic outcomes and the young frequent age at the time of illness, fertility-preserving treatment in young nulliparous females is feasible. However, due to the rarity of this tumor, the experience of fertility-sparing management is very limited (7,10-24).

In this paper, we presented five young LGESS patients who were treated with fertility-sparing surgery and hormonal therapy. Their oncological and pregnancy consequences had been assessed, too. Then we used the Surveillance, Epidemiology, and End Results (SEER database which collects and publishes cancer incidence and survival data from cancer registries covering approximately 28% of the population of the USA to perform population-based studies. Finally, we also provided review of the limited literature. We present the following article in accordance with the STROBE reporting checklist (available at http://dx.doi.org/10.21037/atm-20-2180).

From 2010 to 2019, from the Gynecologic Oncology Department of Qilu Hospital of Shandong University, five women were enrolled into this study, who was diagnosed with LGESS and desiring to preserve their fertility. This study was conducted in accordance with the Declaration of Helsinki (as revised in 2013). This study was approved by the Institutional Ethics committee of Qilu Hospital (KYLL-2015(KS)-081) and informed consent was taken from all the patients.

Follow-up examinations of all patients were conducted every three months during the first three years after treatment, and every six months thereafter. The follow-ups included the recurrence and survival status, and recurrence was defined as a new focus was found by imaging and confirmed by pathology.

Data from the Surveillance, Epidemiology, and End Results (SEER) database of the National Cancer Institute was used for the analysis. After selecting patients with the corpus uteri as the primary site, LGESS as the histologic type (according to ICD-O-3), we identiﬁed 1,070 patients in the analysis between 1973 and 2016. The patients listed in the analysis were staged according to the 7th edition of the TNM classification of the American Joint Committee on Cancer (AJCC). All data (including public data, radiotherapy and chemotherapy data) used here were permitted, and all variable information was obtained.

Survival curves for overall survival were estimated by the Kaplan–Meier method, and comparisons of statistical signiﬁcance were performed with the stratiﬁed log-rank test within each group. Data was analysed using R version 3.6.1 (www.r-project.org). All statistical tests were two-sided, with P values less than 0.05 considered statistically signiﬁcant. All figures and tables in this article are original.

Five patients with LGESS were enrolled in this study, the main characteristics of patients and tumors were summarized in Table 1. The median age was 19.8 years (range, 14–27 years), and at the time of surgery, all of them were nulliparae and expecting pregnancies in the future. Three patients had stage IB cancers, one had stage IIB cancers, and one had stage IIIB cancers.

Two patients were presented with dysmenorrhea, two complained of acute lower abdominal pain, and one reported hypermenorrhea. One patient (case 5) had a surgical history of right breast fibroadenoma resection at 23 years of age, other patients were previously healthy. Before surgery, three patients were presumptively diagnosed as uterine leiomyoma or submucous myoma, one patient was diagnosed as degeneration of uterine fibroids, and the other patient was recognized as “pelvic mass”. For all patients, the previous B ultrasound examination demonstrated a hypoechoic lesion larger than 5cm. Two patients underwent laparotomy, one patient underwent laparoscopy, one patient (case 4) beard laparoscopic exploration and then transferred to laparotomy because of severe adhesion and the patient’s desire to preserve fertility (12), and the other patient (case 5) suffered hysteroscopy first and then laparotomy because of the histological results and incomplete resection (13). No perioperative complications occurred. PR and ER was positive in all cases.

According to the hormone receptor status, adjuvant hormonal treatment was administered to all patients immediately after the fertility-sparing surgery. The adjuvant hormonal treatment and reproductive outcomes are demonstrated in Table 2. Three patients used medroxyprogesterone acetate (MPA), one patient used megestrol acetate (MA), the remaining one patient received MPA and gonadotrophin-releasing hormone (GnRH) analogues. Hormonal therapy was well tolerated among all patients and they all continued hormonal therapy for one year.

It’s worth noticing that among these patients who attempted pregnancy, two conceived naturally and delivered a healthy baby by cesarean section. The durations between treatment and pregnancy was 42 months (case 4) and 22 months (case 5). No evidence showed that recurrences occurred during pregnancy, one patient (case 4) relapsed four months after cesarean delivery and underwent TH/BSO, the other patient (case 5) relapsed about one year after delivery and underwent TH/BSO and cytoreductive surgery. 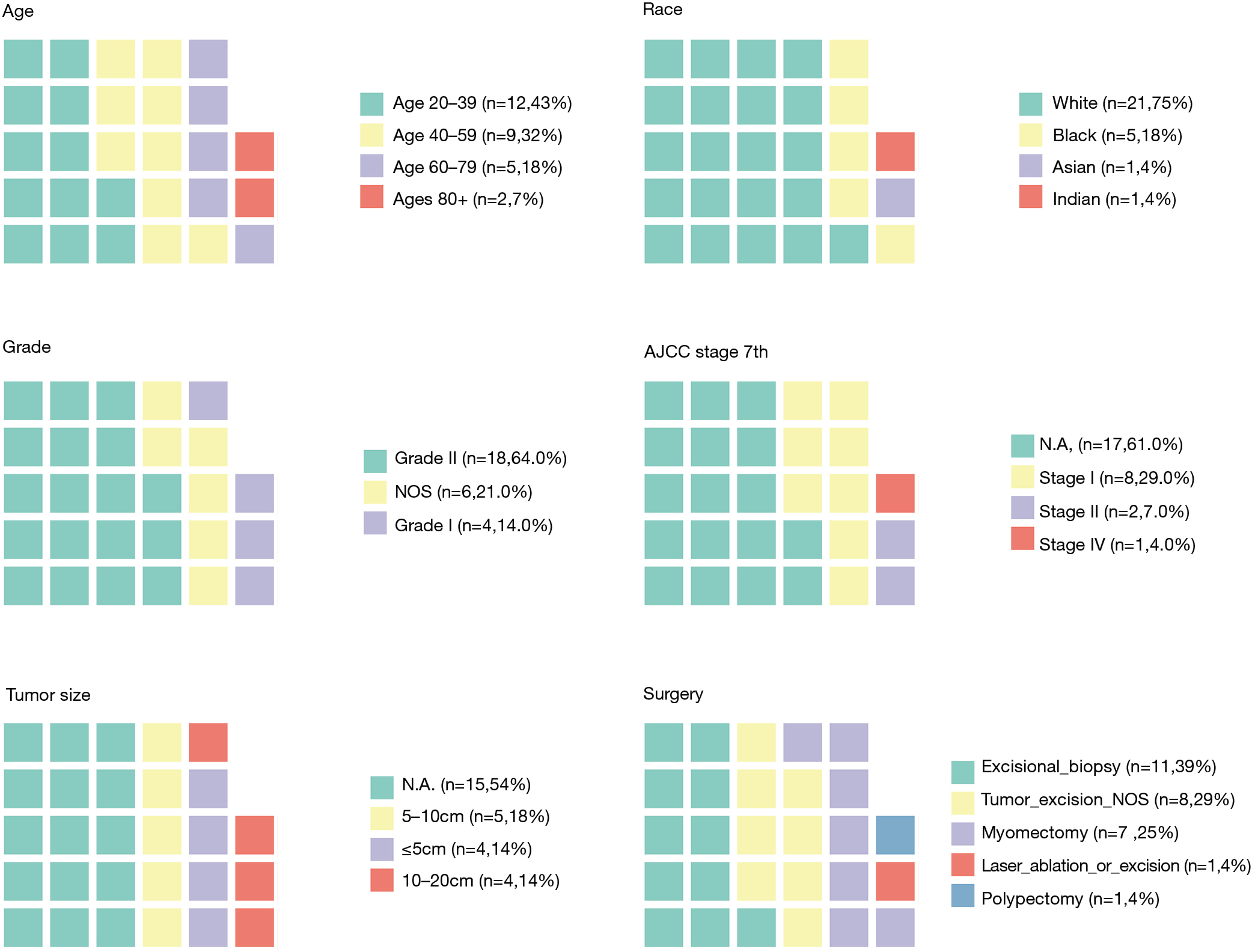 The median follow-up time was 84.5 months (range, 1–475 months), we provided the Kaplan–Meier survival time of different surgical procedure among all LGESS patients, and the results showed that, no statistical signiﬁcance was observed among TH±BSO, radical hysterectomy, subtotal hysterectomy and local tumor excision (P=0.29) (Figure 2A). Besides, considering that most patients who chose fertility-sparing surgery were in child-bearing age (15–49 years old), we performed Kaplan–Meier survival analysis among these patients and the results showed that, local tumor excision did not affect the probability of survival (P=0.69) (Figure 2B). 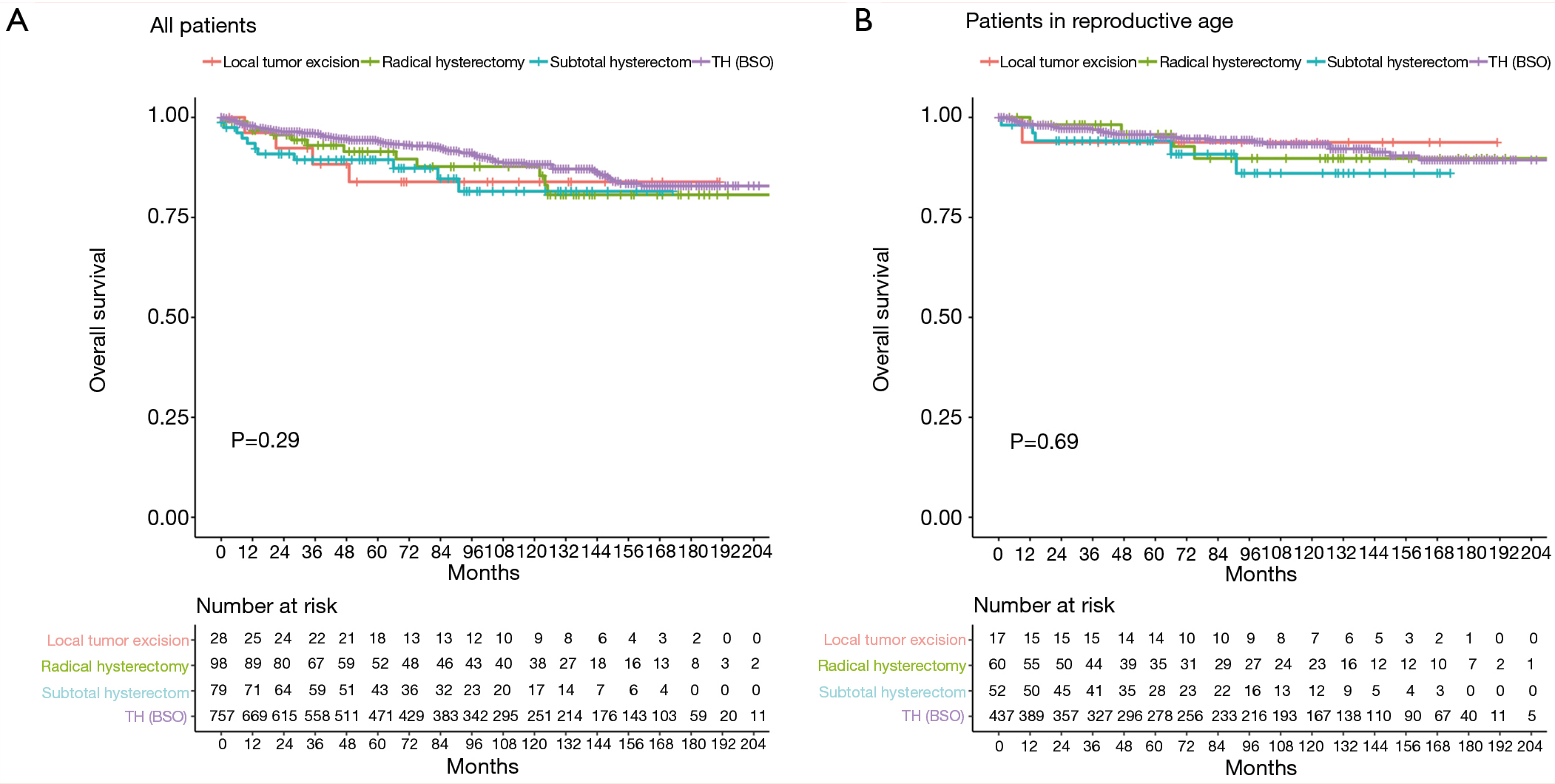 Figure 2 Survival curves for overall survival by different surgical procedure in all LGESS patients (A) and patients of child-bearing age (15–49 years old) (B) from SEER database.

ESS is a kind of rare malignant tumor which originates in the endometrial stromal, and comprises three different subtypes (3). Unlike HGESS and undifferentiated endometrial sarcoma, which are more destructive, LGESS is indolent and characterized by delayed recurrence. For patients with stage I LGESS, 5-year DSS has been estimated to be 90% (5) and the median time of recurrence is 65 months (6).

The common clinical manifestation is abnormal vaginal bleeding. Two patients in our series were presented with acute hypogastralgia as the initial symptom, this might be due to the large tumor size. Due to the nonspecific symptoms, the proper preoperative diagnosis is difﬁcult, usually, it could be thought as uterine leiomyoma or adenomyosis (25). Because LGESS could invade the myometrium and show an inﬁltrative growth pattern, chest CT and abdomen–pelvis CT or MR might help in tumor staging and treatment options (26). But the diagnosis can only be made according to the pathological results. Microscopically, LGESS comprises cells resembling endometrial stroma proliferative phase and lacks significant cytological atypia. What’s more, CD10, SMA, desmin and ER/PR could be used as immunohistochemical markers for diagnosis (27), however, these markers are still non-speciﬁc because their interpretation focuses on the degree of positivity rather than just positivity (3).

The main treatment for LGESS includes TH and BSO, but considering its hormone-sensitive character, favorable prognosis and indolent course, fertility-sparing management could be deliberated for those young patients who desire child-bearing in the future. The management usually includes conservative resection of a uterine mass and adjuvant hormonal therapy. Through analysis of SEER database, we found that no matter in all patients or only in patients of child-bearing age, there were no statistical signiﬁcance observed among TH±BSO, radical hysterectomy, subtotal hysterectomy and local tumor excision, which indicated the feasibility and safety of fertility-sparing management. However, because of the rarity of this tumor, the experience of fertility-sparing management is very limited (mostly based on case reports) (7,10-24).

In order to further observing the feasibility of fertility-sparing management, we summarized 14 literature, including 40 cases of conservative treatment (Table 3). Eight literatures reported cases of LGESS patients who experienced a successful pregnancy following fertility-preserving treatment (10,11,13-15,17-19), three patients were not treated with adjuvant therapy after surgery, one of them recurred at peritoneum 16 months later and was treated with letrozole (15), one patient found recurrence 1 year after surgery with pregnancy (14), and the other patient did not relapse and was 11 weeks of gestation at the time of last contact (17). One patient suffered ifosfamide for 4 cycles, combined with MPA 250 mg for 7 months, and there were no signs of tumor recurrence in 47 months (19). In the remaining four patients, two received MA for at least 6 months (11,18), one used MPA 250 mg for 6 months (13), and the other one received Letrozole 2.5 mg for 6 months (10). Moreover, some literature including more than one patient also came to the conclusion that fertility-sparing surgery may be considered for young patients with early stage LGESS who wish to preserve their fertility (7,23,24). A retrospectively study (24) found that two patients were treated with GnRH analogues followed by LNG-IUD and no recurrence occurred, that indicate that LNG-IUD and GnRH analogues might be a promising treatment for patients who don’t want to conceive in the short-term. 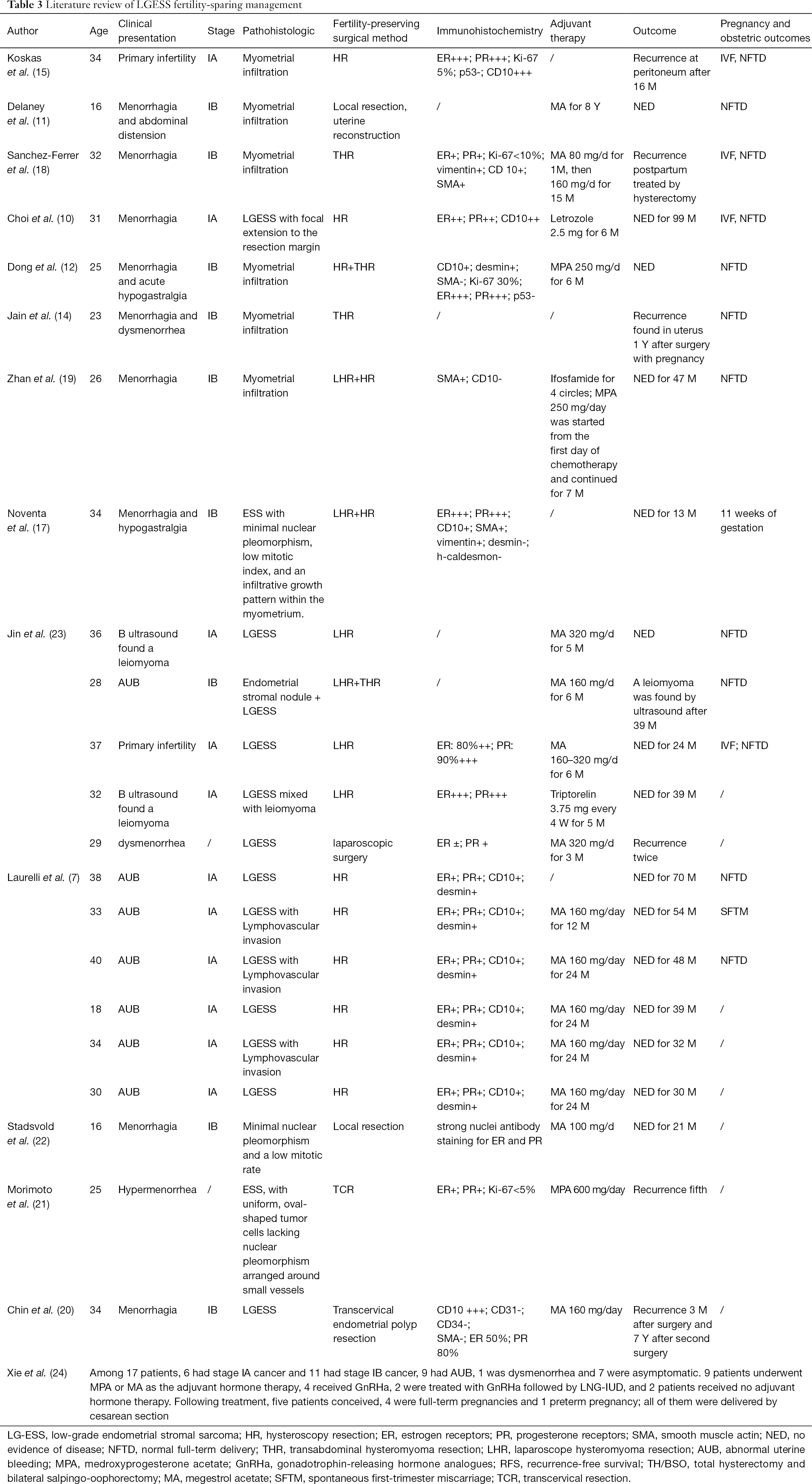 Although most of the literature focused on stage I and II patients, in our series, one patient with stage IIIB (case 4) still got pregnant after conservative treatment. It has to be said that this was a relatively rare case with serious risks. Most studies believe that the treatment outcome has a significant association with stage, histological subtype, tumor size and positivity from cytologic biopsy (28). Although some patients in our series (case 4,5) and in literature (15,16,18) relapsed after pregnancy, it’s hard to say that pregnancy may contribute to the development of LGESS due to changes in hormone levels during pregnancy. Nevertheless, this reminded us gynaecologists that we should consider preserve fertility and undergo pregnancy when making decisions.

In conclusion, although fertility-sparing management is not the current standard of treatment for young LGESS patients, it might be considered by those who desire to preserve their reproductive potential. But it needs gynecological oncologist and gynecological pathologist to make the professional decision, besides, patients should be counseled about the oncologic risks associated with deviation from the standard of care. Despite the fact that the analysis of SEER shows that fertility-sparing management is safe, large-scale studies with long-term follow-up are still needed to confirm the results as well as to further assess the safety and feasibility of conservative excision of uterine mass combined with adjuvant hormonal therapy.

Reporting Checklist: The authors have completed the STROBE reporting checklist. Available at http://dx.doi.org/10.21037/atm-20-2180

Conflicts of Interest: All authors have completed the ICMJE uniform disclosure form (available at http://dx.doi.org/10.21037/atm-20-2180). The authors have no conflicts of interest to declare.

Ethical Statement: The authors are accountable for all aspects of the work in ensuring that questions related to the accuracy or integrity of any part of the work are appropriately investigated and resolved. This study was conducted in accordance with the Declaration of Helsinki (as revised in 2013). This study was approved by the Institutional Ethics committee of Qilu Hospital (KYLL-2015(KS)-081) and informed consent was taken from all the patients.