Bronchopleurobiliary fistula following right lower lobectomy in a patient with prior hepatic abscess: a case report

A thoracobiliary fistula is a rare clinical manifestation of biliary disruption, which is caused by infection, trauma, neoplasm, and postoperative complications of hepatobiliary surgery (1-4). They are pathologic communications between the biliary channel and the bronchial tree or the biliary tract and the pleural space.

Hepatopulmonary fistulae follows the erosion of diaphragm due to several causes such as congenital malformations, penetrating liver trauma, hepatobiliary surgery, intrapulmonary rupture of a hepatic hydatid cyst and biliary obstruction with infected suppuration. Other ways of fistula formation involve the expansion of an infected biloma with biliary stasis into the diaphragm. Extensive suppurative process leads to rupture and erosion of diaphragm and invades the pleural space, bronchus or both.

Here we present the rare case of a 68-year-old male patient with a history of hepatic microabscess who developed a bronchopleurobiliary fistula after right lower lobectomy.

We present the following article in accordance with the CARE reporting checklist (available at http://dx.doi.org/10.21037/atm-20-2776).

A 68-year-old male with a history of diabetes and hypertension was referred to our department for the management of cavitary lung lesion of the right lower lobe. His medical history comprised early gastric cancer 9 years ago, which was treated with totally laparoscopic distal gastrectomy (TLDG) and cholecystectomy. Before TLDG, he underwent endoscopic retrograde cholangiopancreatography (ERCP) because of a common bile duct stone and cholangitis. Three months ago, he was readmitted with cholangitic microabscess in the liver S8, and a cavitary lesion of the right lower lobe was detected incidentally. The initiation of ERCP and antibiotic treatment improved the patient’s condition, and follow- up liver dynamic computed tomography (CT) revealed the regression of cholangitic microabscess and pneumobilia was not shown. However, a pulmonary nodule in the right lower lobe was enlarged, from 2.3 cm at 2 months before chest CT to 2.6 cm.

Accordingly, we performed video-assisted thoracoscopic surgery (VATS) right lower lobectomy and mediastinal lymph node dissection uneventfully. We observed no enlarged lymph node in the mediastinum and no abnormality in the diaphragmatic surface. The postoperative course was uneventful; therefore, the patient was planned to be discharged. On postoperative day 10, the patient developed fever, pneumonic infiltration in the right lower lung field, and hydropneumothorax on the right side. We performed bronchoscopy and suspected micro-bronchopleural fistula (BPF). Chest CT revealed recently developed pneumobilia (Figure 1). We administered antibiotics intravenously to the patient, reinserted the chest tube, and applied the 20-mmHg thoracic suction. Despite persistent air leakage, the patient’s condition improved gradually. On postoperative day 28, the total bilirubin levels in the serum and chest tube drainage were 0.7 and 0.5 mg/dL, respectively. On postoperative day 33, follow-up bronchoscopic examination revealed BPF aggravation. On postoperative day 38, we performed VATS Talc pleurodesis. In addition, severe pleural adhesion was noted, particularly on the posterior pleural space, and the bronchial stump stapling site was observed, but the air leakage was not prominent and bile was not found. Despite performing Talc pleurodesis, the air leakage persisted, and the thoracic suction was continued. After 1 week of VATS pleurodesis, the patient developed contralateral pneumonia. Meanwhile, the patient developed yellowish sputum and repeated bronchoscopic examination on postoperative day 47 confirmed the bile-stained sputum (Figure 2). The total bilirubin levels in the serum, chest tube drainage, and bronchial washing were 0.8, 0.8, and 0.3 mg/dL, respectively and bronchial washing and pleural fluid showed the same color and nature (Figure 3). 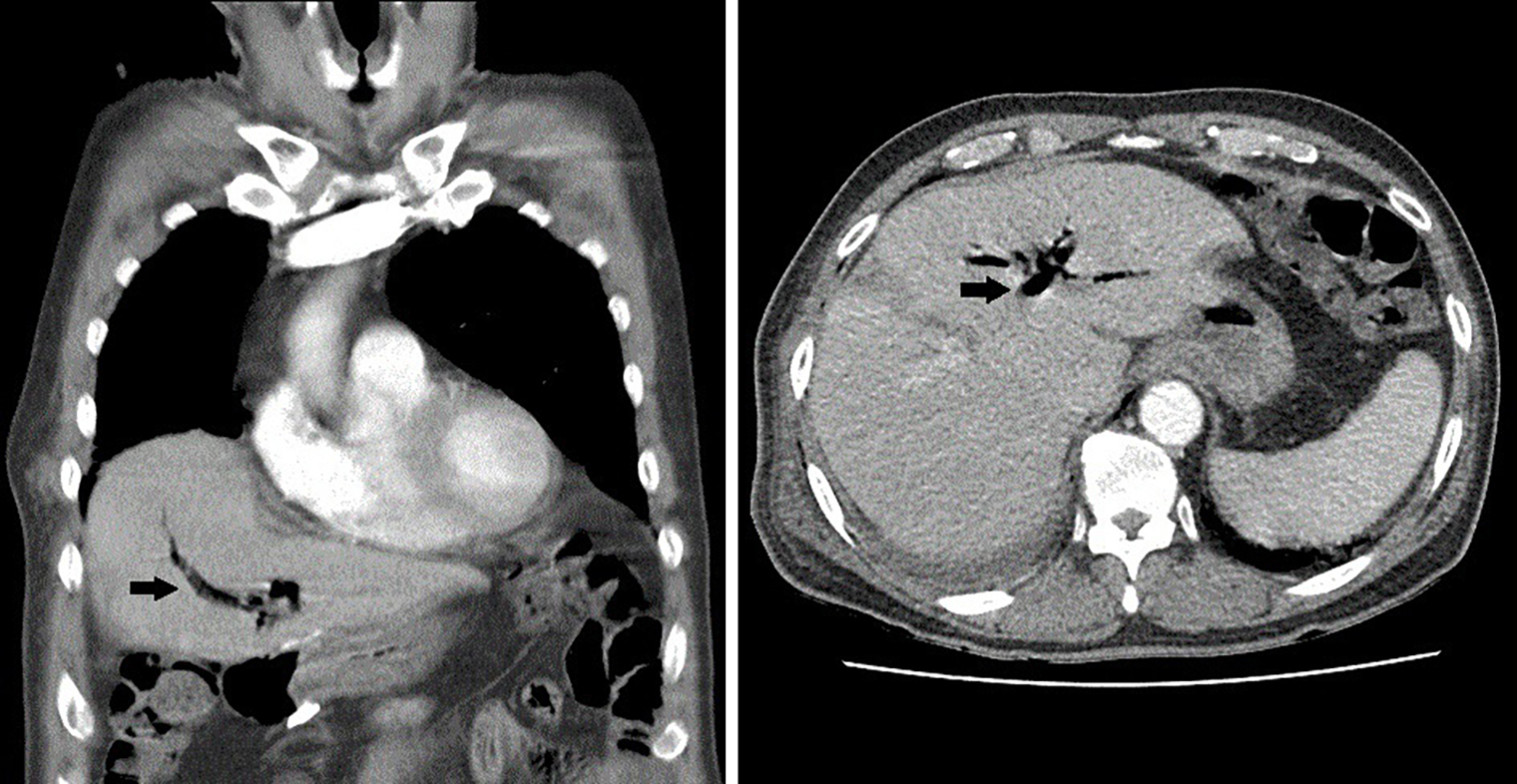 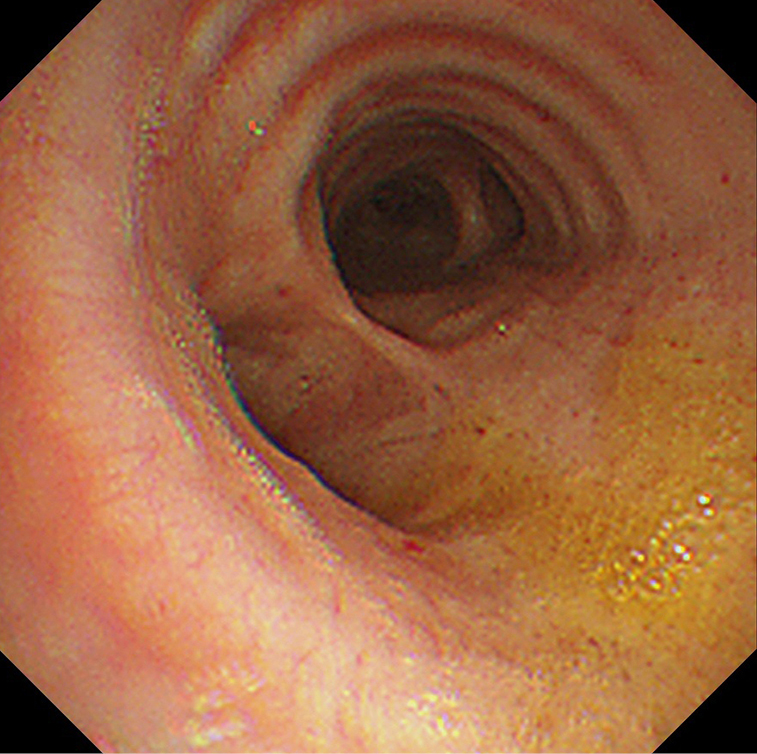 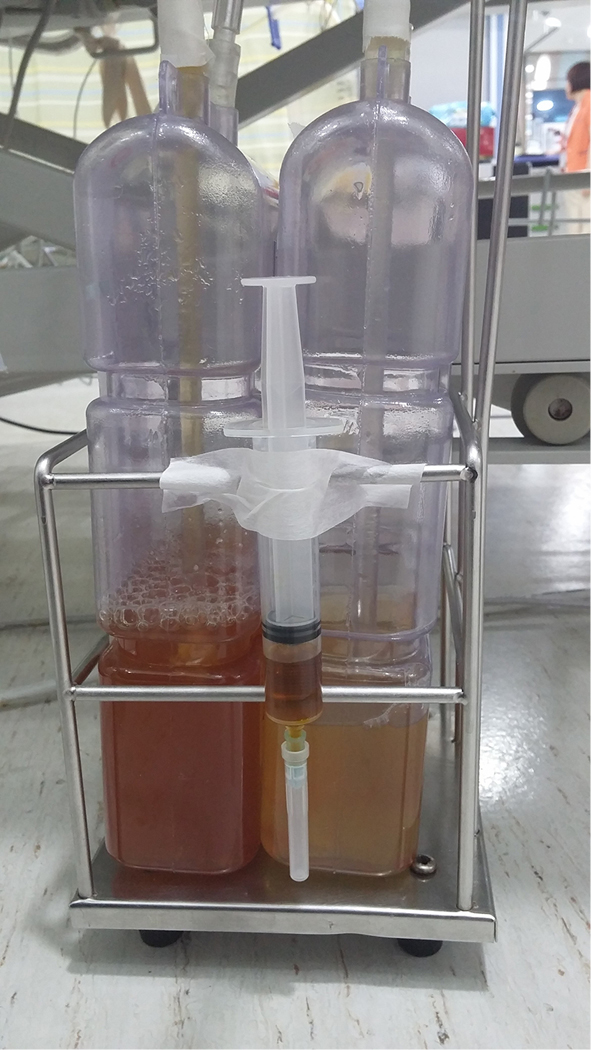 All procedures performed in studies involving human participants were in accordance with the ethical standards of the institutional and/or national research committee(s) and with the Helsinki Declaration (as revised in 2013). Written informed consent was obtained from the patient families.

The occurrence of acquired bronchobiliary fistula could be attributed to several causes, including hepatic hydatid disease or liver abscess (echinococcic, amebic, or pyogenic), blunt or penetrating traumatic biliary tract obstruction, iatrogenic fistulas after liver resection, radiofrequency ablation, bile duct stricture, irradiation, and thoracic drainage. Both primary and secondary hepatic tumors are frequent preexisting clinical conditions (5), and chronic pancreatitis, subphrenic abscess, and acute cholecystitis in a suprahepatic gall bladder can cause a bronchobiliary fistula. Typically, bronchobiliary or pleurobiliary fistulas are known to originate from the hepatobiliary system; however, in the present study, these characteristically originated from a BPF after right lower lobectomy in a patient with potential hepatic microabscess.

Although biliptysis and pneumonia were the leading clinical manifestations and jaundice was a rare finding, it could be misdiagnosed as acute pneumonitis or a chronic irritable cough producing greenish sputum, as in our patient. Predictably, ERCP or percutaneous transhepatic cholangiography facilitated direct visualization of the fistula. However, contrast-enhanced magnetic resonance cholangiography and hepatobiliary iminodiacetic acid (HIDA) scan are more advantageous than conventional noninvasive techniques.

To date, two mechanisms of pathogenesis have been suggested (4). First, the biliary tract obstruction results in the retention of bile and a liver biloma eventually leads to the abscess formation. Usually, an increased abscess erodes the diaphragm, lung parenchyma, and bronchus and causes a bronchobiliary fistula. Second, a thoracobilary fistula occurs without the biliary tract obstruction. Amebic, or pyogenic liver abscess enlarges and erodes the diaphragm, which results in the formation of a bronchobiliary or thoracobilary fistula. Unlike these mechanisms, the fistula in our patient originated from the BPF after right lower lobectomy. The BPF eroded the diaphragm, and the continuous thoracic suction with negative pressure augmented an irritation on the pleural space and diaphragmatic surface. In our patient, the BPF could have been a potential infection source of hepatic microabscess. In addition, diaphragmatic pores could be communicating sources between the pleural and abdominal cavities. The negative thoracic suction and negative inspiratory pressure during respiration exacerbated the bile regurgitation into the bronchial tree through the pleural space and caused a bronchopleurobiliary fistula.

Apparently, bile exerts a corrosive effect on the lungs and pleural space. While a pleurobiliary fistula predisposes a loculated bilious empyema, a bronchobiliary fistula may predispose to a necrotizing bronchitis, bronchopneumonia, or chronic indirect pneumonitis. Therefore, early diagnosis with a high index of clinical suspicion is imperative for the optimal management. Both bronchoscopic examination and the illustration of the bile-stained secretion in the bronchial tree are crucial for the diagnosis. In addition, a biliary excretion scintigraphic (HIDA) scan can visualize the contrast material in the biliary tree and direct communication with the bronchial tree. Prodromos et al. suggested that elevated bilirubin levels in the sputum and/or pleural effusion (range, 4–10 mg/dL) were diagnostic criteria (2,6). However, in our patient, the total bilirubin levels in pleural effusion, serum, and bronchial washing were 0.8, 0.8, and 0.3 mg/dL, respectively, signifying that the low bilirubin level in pleural effusion and bronchial washing could not exclude the diagnosis of bronchopleurobiliary fistula.

To date, the optimal treatment remains controversial and challenging. Previously, less invasive techniques, such as endoscopic retrograde biliary drainage, endoscopic sphincterotomy, ENBD, endoscopic stone extraction, and percutaneous transhepatic cholangial drainage, have been performed. The surgical treatment of pulmonary lobectomy, closure of fistula tract, hepatic lobectomy, hepaticoenterostomy, and abscess drainage alone can also be considered. In the case of diaphragmatic, pleural, bronchial, or pulmonary damages, closure of the diaphragm, pleural drainage, decortication, or different pulmonary resections can be performed (7-9). Although recurrent bronchobiliary fistula has rarely been reported after surgical management, it is typically reoperative and related to substantial morbidity and mortality.

The limitation of the present study is that communications between bronchus, pleural space and biliary trees are not confirmed with imaging studies such as HIDA scan. Bronchopleurobiliary fistula can be hardly suspected at early stage, therefore, early suspicion and definitive diagnostic procedure are important for patient outcome.

Reporting Checklist: The authors have completed the CARE reporting checklist (available at http://dx.doi.org/10.21037/atm-20-2776).

Conflicts of Interest: All authors have completed the ICMJE uniform disclosure form (available at http://dx.doi.org/10.21037/atm-20-2776). The authors have no conflicts of interest to declare.

Ethical Statement: The authors are accountable for all aspects of the work in ensuring that questions related to the accuracy or integrity of any part of the work are appropriately investigated and resolved. All procedures performed in studies involving human participants were in accordance with the ethical standards of the institutional and/or national research committee(s) and with the Helsinki Declaration (as revised in 2013). Written informed consent was obtained from the patient families.