Efficacy and toxicities of low-temperature plasma radiofrequency ablation for the treatment of laryngomalacia in neonates and infants: a prospective randomized controlled trial

Laryngomalacia is a common disease of infancy, affecting 45–75% of all neonates and infants who present with congenital stridor (1-3). The typical manifestation is the upper airway obstruction caused by the collapse of supraglottic structures (4). In general, symptoms, typically presents itself as inspiratory stridor, would become apparent after the first 2 weeks of life, increase towards the 6th to 8th month of life, and then most cases would resolve between 12 and 18 months of age with minimal or no treatment. However, approximately 10–15% of cases require surgical intervention due to a severe presentation or worsening of symptom despite conservative treatment (5,6). Traditional supraglottoplasty for laryngomalacia is most commonly conducted with cold steel instruments. Although traditional surgery achieves a high success rate, serious complications including bleeding, supraglottic stenosis and aspiration can occur (7,8). Low-temperature plasma radiofrequency ablation (LTP-RFA) using coblation technology is a relatively new technology that has shown promise in treating pediatric laryngeal disease, with minimally invasive (9). Since Jan 2014, our institute firstly introduced LTP-RFA for the treatment of laryngomalacia, approximately 25 patients would receive LTP-RFA treatment annually. In our previously published retrospective study of 17 patients, we found that LTP-RFA was an effective and safe treatment for severe laryngomalacia, which provided better breathing, feeding and sleeping outcomes (10). However, whether LTP-RFA is superior to traditional approaches remains unknown. In addition, treatment strategy for mild-moderate laryngomalacia remains controversial although wait-and-see policy would be recommended. In a recent publication by van der Heijden et al. found that supraglottoplasty significantly reduced the improvement of laryngomalacia than wait-and-see policy (5 vs. 29 weeks, P=0.026) in all severities (11). Therefore, the primary aim of the present study is to investigate the optimal treatment strategy for the treatment of laryngomalacia by comparing the short outcomes of patients with moderate and severe laryngomalacia, who have been randomly treated with LTP-RFA, traditionally surgical supraglottoplasty or wait-and-see policy. We present the following article in accordance with the CONSORT reporting checklist (available at http://dx.doi.org/10.21037/atm-20-3164).

This study was a prospective randomized controlled trial in our institution which had been approved by ethical committee of Shanghai Children’s Hospital, Shanghai Jiao Tong University. The trial had been registered in Chinese Clinical Trial Registry (http://www.chictr.org.cn/index.aspx; registration number: ChiCTR2000029098). All procedures performed in this study involving human participants were in accordance with the ethical standards of the institutional and national research committee and with the 1964 Declaration of Helsinki and its later amendments or comparable ethical standards. Informed consent was obtained from all individual participants’ parents included in the study.

A division of severity of laryngomalacia was made on clinical presentation and endoscopic findings (3). Criteria of severity and indicators for surgical treatment in our institution included one or more of the following items: severe stridor with tachypnea, dyspnea, or hypoxia, usually present as moderate to severe laryngeal obstruction, recurrent cyanosis, sustained failure to thrive, aspiration pneumonia, feeding difficulties with choking or suffocating episodes or endoscopy showed significant dynamic airway obstruction. The diagnosis criteria for moderate laryngomalacia in the present study was child presented with one or more of the following items: cough, choking, regurgitation, and feeding difficulty. In addition, mild laryngomalacia was diagnosed with inspiratory stridor with no other symptom or radiographic findings suggesting secondary airway lesion. Transnasal flexible fiberoptic laryngoscopy (FFL) would be performed for all included patients to confirm the diagnosis of laryngomalacia.

Prior to the present study, we had established a simple evaluation system to efficiently assess the therapeutic effect of supraglottoplasty for laryngomalacia (12). The therapeutic evaluation system consisted of clinical score and visual analogue scale (VAS) score. VAS score was used for the parents of the children to assess the subjective symptoms including stridor, reflux or feeding difficulties, aspiration, dyspnea and frequency or severity of pneumonia (each of them, ranging 0–10), and the VAS score for subjective symptom ranging from 0 to 50; Clinical score was objectively determined by the physician on the children’s laryngeal obstruction, supraglottic morphology in laryngoscope, swallowing function, weight and the result of polysomnography (each of them, ranging 0–10, Table 1). The total score was the combination of clinical score with VAS score (ranging 0 to 100). The changed total score, clinical score and VAS symptom score after treatment was used to compare the therapeutic effect of supraglottoplasty.

The work has been reported in line with Consolidated Standards of Reporting Trials (CONSORT) Guidelines. 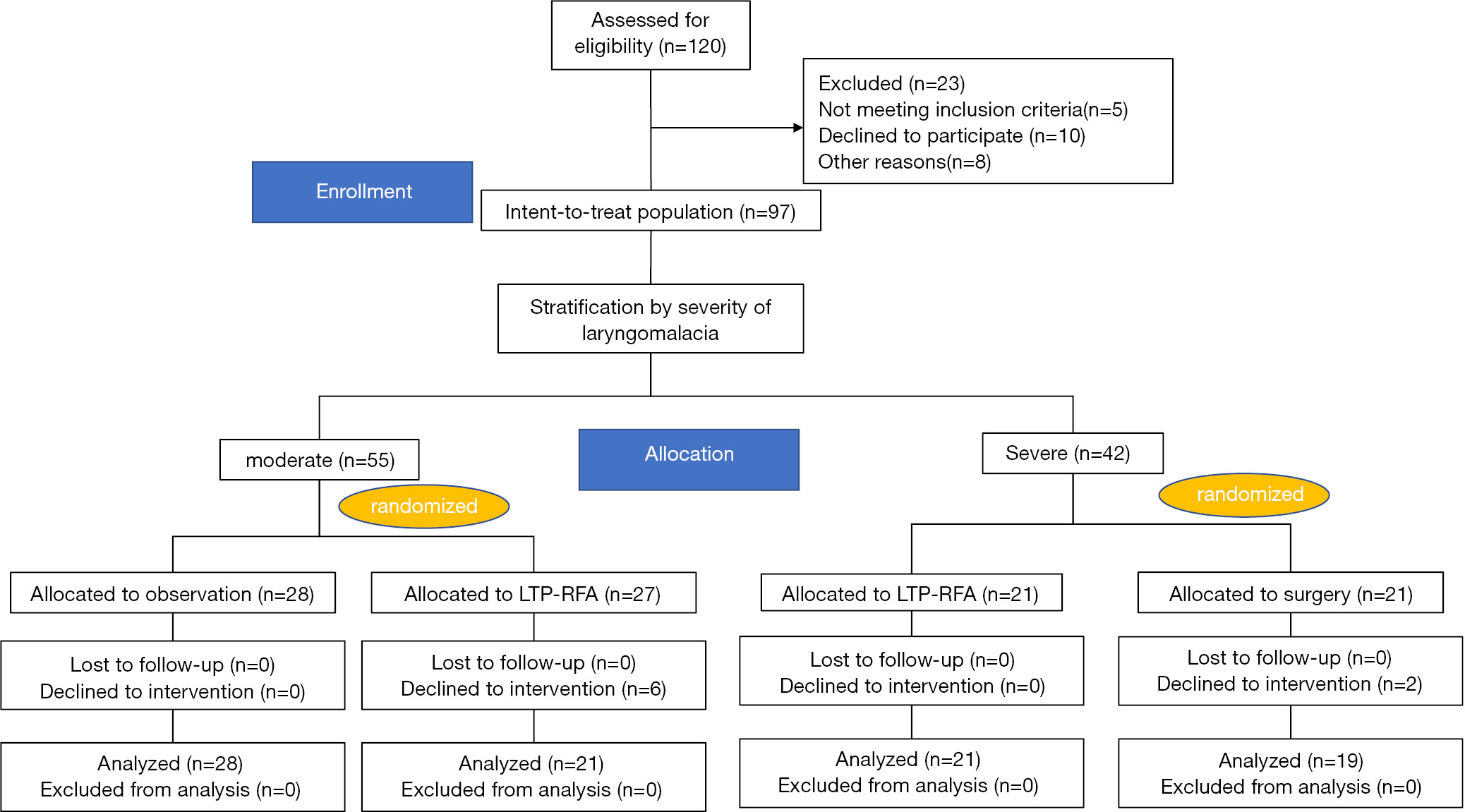 The median age was 68 days (range, 19 to 337 days). Fifty seven patients (64%) were male and thirty-two patients (36%) was female. The morphological type of laryngomalacia was seen in type II (49.4%), type III (1.2%) or combined types (49.4%). Of the 89 children, 40 children presented with severe laryngomalacia, and the remaining 49 children were moderate laryngomalacia (Table 2). Comorbidity was found in 9 patients (10.1%), the most commonly found comorbidity was lingual root cysts with 4 cases. 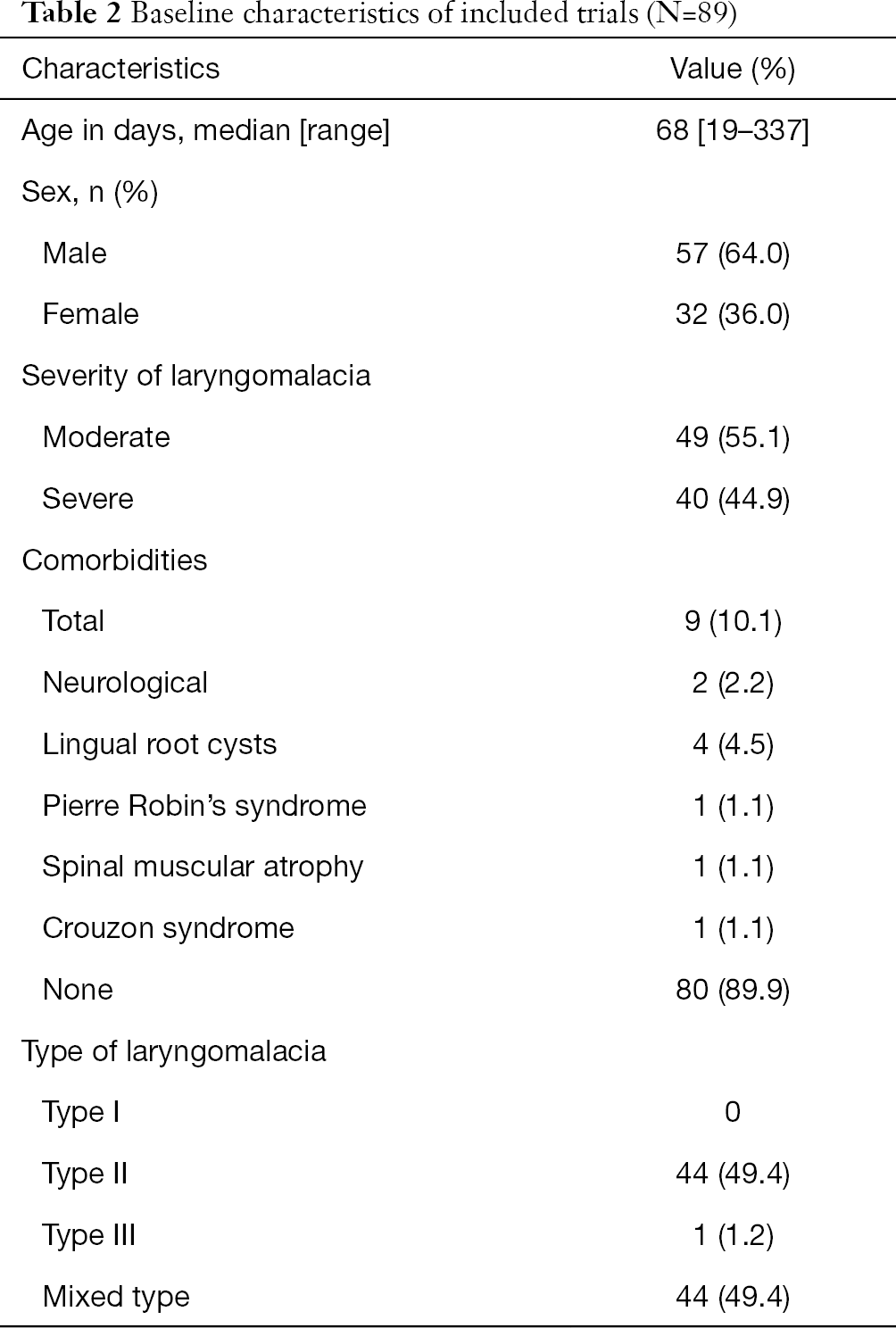 Efficacy and safety of LTP-RFA vs. traditional surgery

A total of 42 children with severe laryngomalacia were randomized (Figure 1). Of them, two patients in surgery group declined to the randomized intervention, thus 19 children finally received traditionally surgery, while 21 treated with LTP-RFA. Our results showed that LTP-RFA treatment significantly decreased the operative time (5.55±1.66 vs. 18.7±5.31 min, P<0.001) and length of hospital stay (6.71±1.15 vs. 7.95±1.55 days, P=0.008) by using T test (Table 3). As for the amount of intraoperative hemorrhage was non-normally distributed variables, the Mann-Whitney U test was used. The result demonstrated that LTP-RFA treatment also significantly reduced the amount of intraoperative hemorrhage (1.71±1.79 vs. 4.90±1.82, P<0.001) when compared to traditionally surgical supraglottoplasty. As for the efficacy differences between LTP-RFA and traditionally surgical supraglottoplasty, no significant differences were found between the two groups assessed by changed total scores (P=0.322), changed clinical scores (P=0.135) and changed VAS symptom score (P=0.559, Table 4).

Efficacy of LTP-RFA vs. observation

As we all known, most cases of laryngomalacia are mild and self-limited. Therefore, a majority of children would be treated with wait-and-see strategy, excepting for severe laryngomalacia. However, an increasing tendency towards a surgical option for mild-moderate laryngomalacia has been observed as well. In a respective case reported by Ribeiro et al. (13), the authors found that 28.2% of the children received supraglottoplasty, which was higher than previous reports (14,15). In another large retrospective study conducted by van der Heijden et al. (11) demonstrated that the surgical procedure significantly shortened the time necessary to reach an improvement of symptoms in all types of laryngomalacia. As a result, the optimal treatment strategy for moderate laryngomalacia remains undetermined and there is an urgent need to clearly determine the role of supraglottoplasty for children in this setting. Additionally, although multiple retrospective studies have showed that RFA is an effective and safe treatment for severe laryngomalacia, no prospective evidence of direct comparison between the efficacy and toxicities of RFA and traditional surgery is available.

This is the first prospective four-arms randomized trial to compare the short outcomes of patients with moderate and severe laryngomalacia, who have been randomly treated with LTP-RFA, traditionally surgical supraglottoplasty or wait-and-see policy according to the severity of laryngomalacia. A total of 89 children are finally included for analysis. Among them, 40 children present with severe laryngomalacia, and the remaining 49 children are diagnosed as moderate laryngomalacia. Our results show that LTP-RFA treatment significantly reduces the operative time (P<0.001), length of hospital stay (P=0.008) and the amount of intraoperative hemorrhage (P<0.001) when compared to traditionally surgical supraglottoplasty, while symptom improvement based on clinical or VAS score between LTP-RFA treatment and traditional surgery are comparable. In consistent with previous reports, our results confirm that LTP-RFA treatment significantly shortens the time necessary to reach an improvement of symptoms when compared to wait-and see-strategy.

Treatment related complication is another major concern. A noteworthy finding in our study is that a total of 10 patients (14.7%) develop post-operative pneumonia. A comparable incidence of post-operative pneumonia is observed between LTP-RFA treatment and traditional surgery. One possible reason for this finding is that all patients would be intubated for 5–7 days after surgery in the ICU in order to achieve a better epiglottal position and to avoid reconglutination of the aryepiglottic folds, and most of these post-operative pneumonia occur during this time, thus surgeons should pay more attention to the risk of developing pneumonia after surgery. Additionally, 5 patients (17.8%) with moderate laryngomalacia pneumonia develops pneumonia during the wait-and-see time. It has been reported that comorbidities decrease the success rate of laryngomalacia, and even failures and complications of surgery are attributed to comorbidities. Comorbidity is found in 10% of our patients, which is lower than the incidence of literature comorbidity (25–47%) (16). In our series, one patient with spinal muscular atrophy in the traditional surgery group develops pneumonia after surgery, this patient finally dies as the child’s parents decide to give up treatment.

This is the first largest prospective randomized controlled trial to investigate the efficacy and toxicities of LTP-RFA versus traditional surgery or observation for the treatment of laryngomalacia. The present study indicates that LTP-RFA is an effective and safe treatment option for both severe and moderate laryngomalacia in neonates and infants with a low intraoperative complication. No surgical related death is reported. Long-term outcomes of children treated with LTP-RFA for laryngomalacia would be reported in further studies.

Reporting Checklist: The authors have completed the CONSORT reporting checklist. Available at http://dx.doi.org/10.21037/atm-20-3164

Conflicts of Interest: All authors have completed the ICMJE uniform disclosure form (available at http://dx.doi.org/10.21037/atm-20-3164). The authors have no conflicts of interest to declare.

Ethical Statement: The authors are accountable for all aspects of the work in ensuring that questions related to the accuracy or integrity of any part of the work are appropriately investigated and resolved. The study was conducted in accordance with the Declaration of Helsinki (as revised in 2013). This study was a prospective randomized controlled trial in our institution which had been approved by ethical committee of Shanghai Children’s Hospital, Shanghai Jiao Tong University (registration number: ChiCTR2000029098). Informed consent was obtained from all participants included in the study.