Missed diagnosis of cerebral infarction has been frequently reported ranging from 2–26% especially found in posterior circulation stroke with nonfocal symptoms such as altered mental status, dizziness, and headache (1-3). The failure to recognize an acute cerebral infarction could delay the timely secondary prevention treatment and may bring a disastrous outcome to the patients. The NIHSS scale (4) and FAST assessments (5) were reported to be less sensitive in diagnosing posterior circulation stroke. Head computed tomography (CT) is also insensitive to detect brain stem lesions, especially in acute cerebral infarction.

Diffusion-weighted imaging (DWI) sequence in MRI is proven to be useful in the detection of cerebral infarction (6,7), even in unselected suspected patients (8). However, MRI scanning of all patients with suspected cerebral infarction was not cost-effective (9,10). Furthermore, it may not always be possible to perform a scan due to unavailability. The newly published Guidelines for the Early Management of Patients with Acute Cerebral Infarction also indicated this problem (11). Therefore, finding a reliable biomarker to identify the most probable cerebral infarction patients to undergo head MRI is needed in order to not only reduce the misdiagnosis of cerebral infarction but also reduce unnecessary usage of limited medical resources.

The neutrophil to lymphocyte ratio (NLR), which is calculated as the ratio of neutrophil to leukocyte, has been used as a marker of systemic inflammation in clinical practice. Previous studies have proved that the pathophysiology of cerebral infarction involved an inflammatory process not only in local ischemic brain but also in the peripheral inflammatory system (12,13). Neutrophils have been reported to increase within 15 minutes of the brain ischemia and could surround the damaged cerebral vessels (14). At present, NLR has been reported to be a predictor of short-term mortality in acute stroke patients (15) and is even associated with increased risk of new cerebral infarction and composite events in minor stroke or transient ischemic attack (16,17). However, no study has investigated the value of NLR in the identification of cerebral infarction with nonfocal symptoms.

We present the following article in accordance with the STROBE reporting checklist (available at http://dx.doi.org/10.21037/atm-20-1640).

The study was conducted in accordance with the Declaration of Helsinki (as revised in 2013). This study was approved by the institutional review board of Shanghai Sixth People’s Hospital (No. YS-2019-001). As this study was retrospective, the requirement for informed consent was waived. From January 1, 2018, to December 31, 2018, adult patients ≥40 years old with nonfocal stroke symptoms presenting to the Emergency Department (ED) and having a head CT were included (Figure 1). Nonfocal stroke symptoms were defined as common stroke confusing symptoms including altered consciousness, dizziness, headache, and memory loss, as reported in previous studies (18-20). In our hospital, patients with nonfocal stroke symptoms were firstly evaluated by an ED neurologist. NIHSS scale was done to assess the severity. A head CT examination was ordered for the suspected stroke detection or other unexplained neurologic symptoms. A further head MRI may be ordered for detecting cerebral infarction or excluding other severe brain diseases while the patient agreed to have a head MRI and had no MRI contraindications. The final diagnosis of cerebral infarction was diagnosed by neurologists based on the detailed medical history, neurological examination, clinical assessment (NIHSS score), and imaging results including brain CT and MR-DWI results. 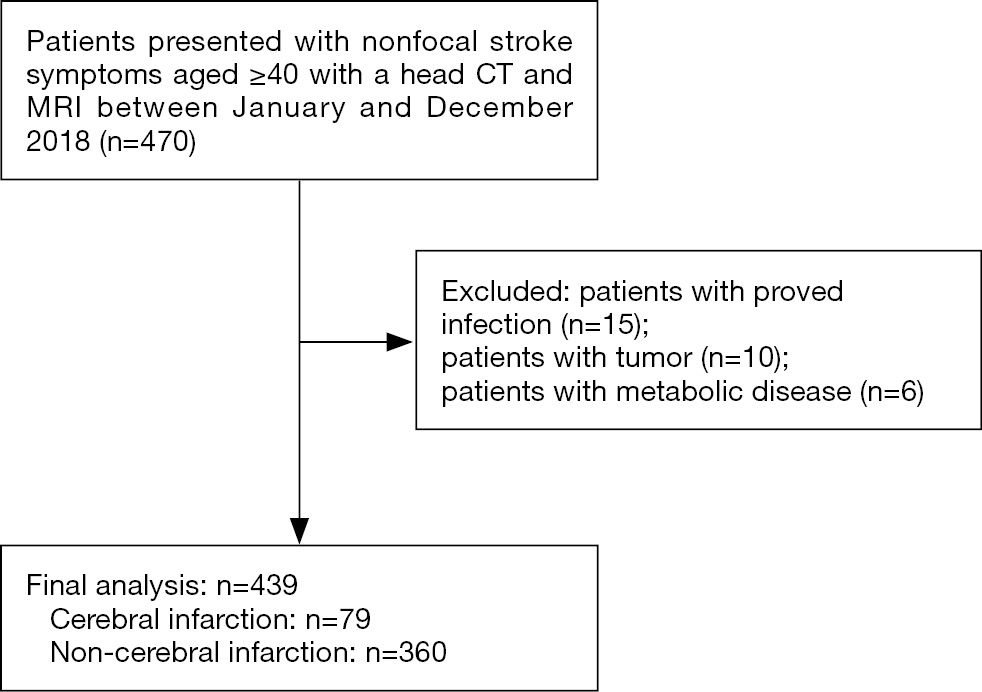 The following inclusion criteria were applied: (I) adult patients who were more than 40 years old and had nonfocal stroke symptoms; (II) patients should have a head CT examination and a routine complete blood count test within 24 hours, followed by a head MRI examination within seven days. We excluded the following subjects: patients with proven infection and inflammatory disease on admission; those with evidence of brain hemorrhage, tumors, and traumatic disease observed on CT imaging; patients with a history of cancer; patients with severe hepatic and renal diseases; patients with acute metabolic diseases; and patients with psychiatric disorders.

Demographics and clinical information including age, sex, and symptoms of each patient were collected. Medications and medical history of hypertension, diabetes, coronary heart disease, atrial fibrillation, smoking, and alcoholism were also collected from the medical record. Complete blood count analysis, including total white blood cell (WBC), neutrophil, and lymphocyte was conducted using an auto-analyzer in our hospital. The NLR value was calculated as the ratio of absolute neutrophil to lymphocyte.

Negative head CT result was defined as having no evidence of intracranial hemorrhage, recent obvious ischemia, or mass lesion. Two experienced neuroradiologists (with 12- and 15-year experience in neuroimaging) who were blinded to all clinical information and the MR images interpreted the head CT image. Any disagreements were resolved by consensus. MRI was interpreted by another experienced neuroradiologist (with 8-year experience in neuroimaging), mainly focused on any brain area showing high signal on DWI sequence.

All statistical analysis in this study was performed using SPSS for Microsoft Windows software (version 20.0, IBM). The Kolmogorov-Smirnov test was used to test normality for continuous variables. The Mann-Whitney U test and chi-square test were used to analyze the difference of demographic and clinical characteristics between the cerebral infarction group and non-cerebral infarction group. Logistic regression was used to assess the relationship between DWI-confirmed cerebral infarction and the study variables by the backward stepwise procedure. The logistic regression model included variables with P<0.05 in the univariate analysis. Variables that were significant in the logistic analysis were included for further receiver operating characteristic (ROC) curve analysis. The combined performance of these variables was investigated using binary logistic regression (details are provided in Supplementary). The optimal cutoff values for various parameters were determined using the maximum sum of sensitivity and specificity in the ROC curve analysis. The area under ROC (AUC) was compared using the DeLong method (21). P<0.05 was considered statistically significant.

Clinical characteristics of the study participants

The clinical characteristics of the study population are presented in Table 1. A total of 439 patients in the ED with nonfocal stroke symptoms with CT-negative findings were included in this study (Figure 1). Median (interquartile range) age of the study patients was 69 years (63–78 years), and 231 patients (52.62%) were women. The most common symptom was dizziness (85.19%), followed by altered consciousness (7.06%), headache (5.47%), and memory impairment (2.28%). As for medical history, hypertension (59.68%) was most frequently observed, followed by diabetes mellitus (23.69%), coronary heart disease (9.79%), and atrial fibrillation (2.96%). Furthermore, 12.76% and 10.02% of patients had a history of smoking and alcoholism, respectively. 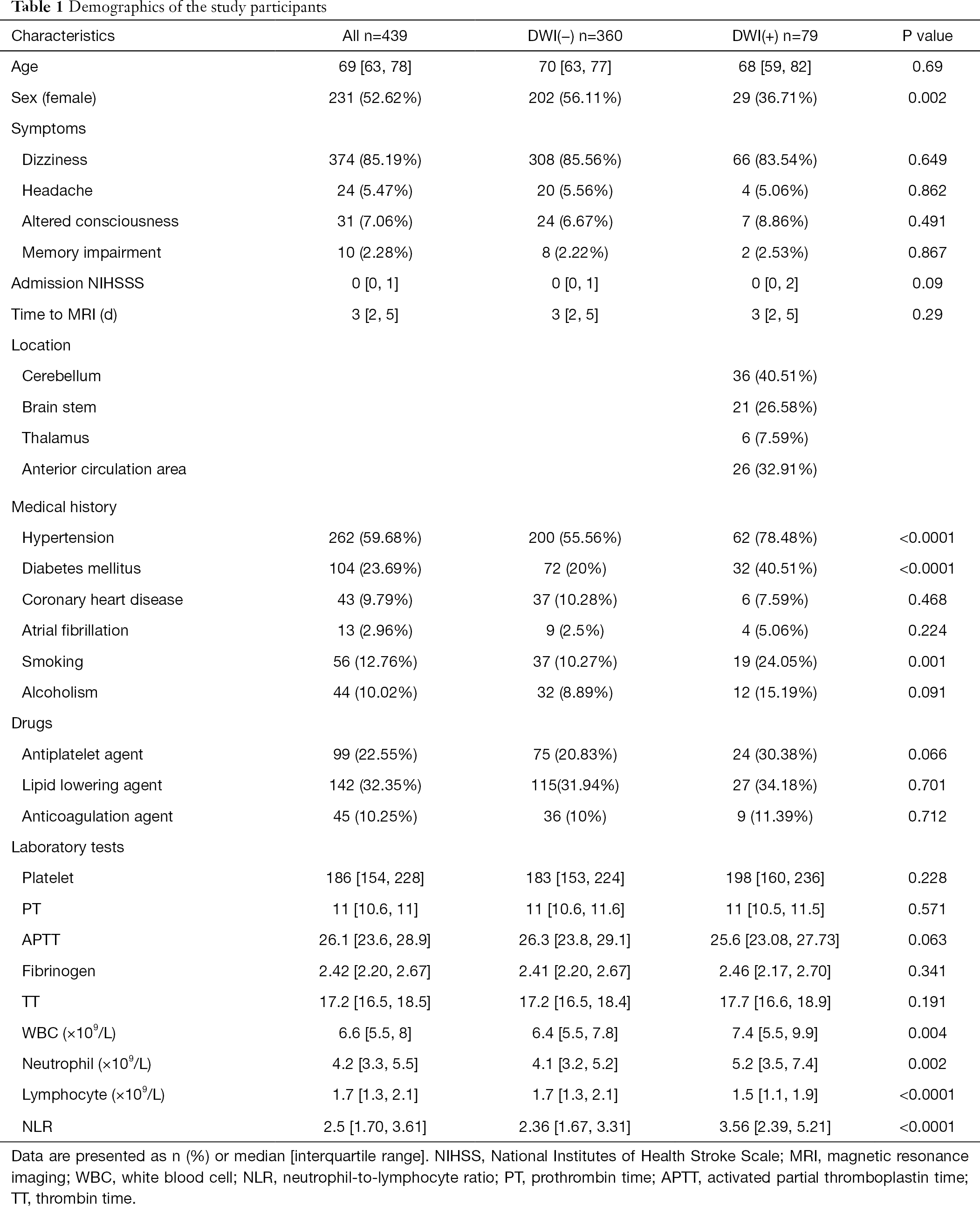 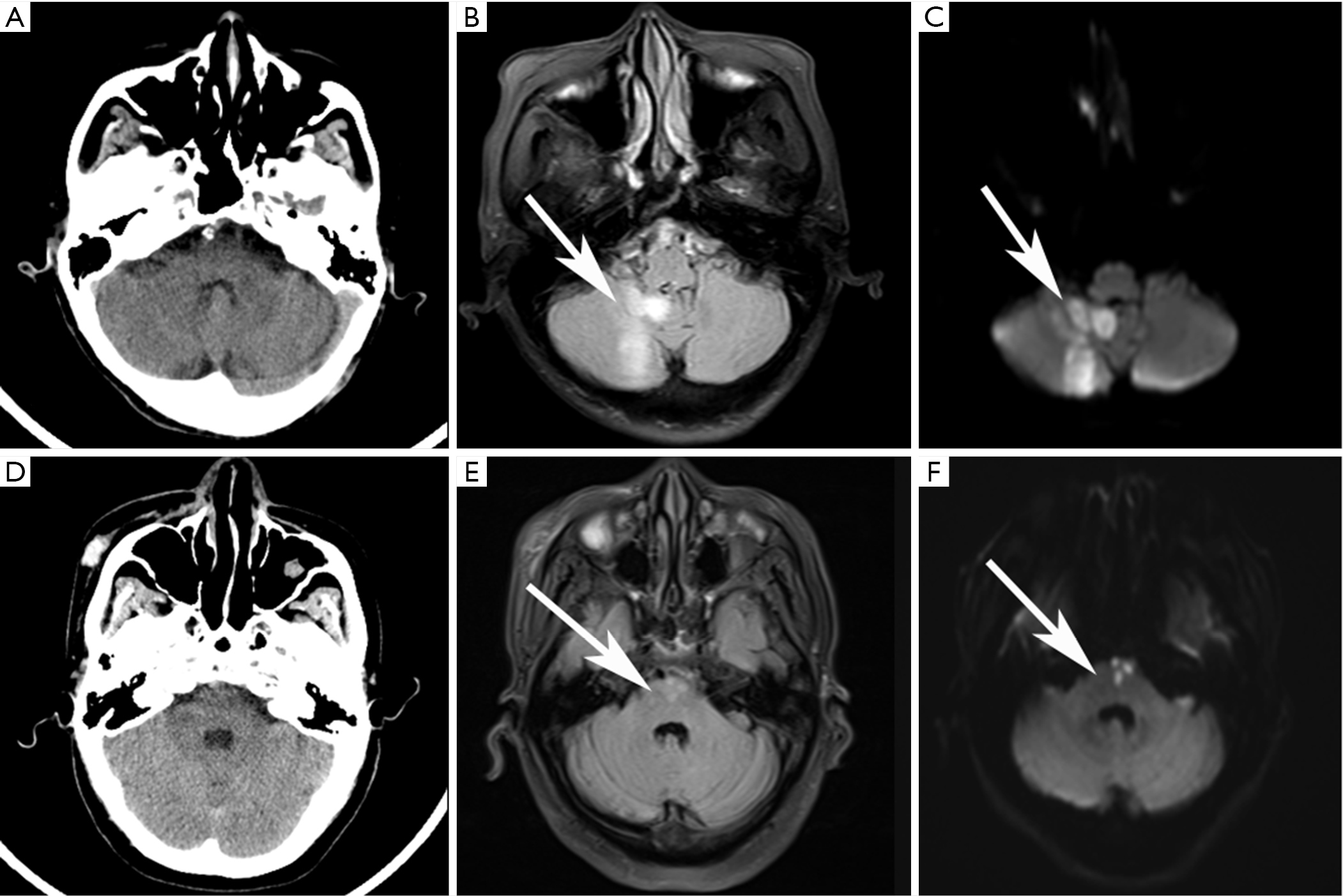 Correlation between NLR and cerebral infarction with nonfocal stroke symptoms

Table 3 shows the diagnostic performance of NLR and other clinical parameters separately and synthetically. At the cutoff value of 2.35, NLR achieved a sensitivity value of 78.48% and a specificity value of 50.00% in diagnosing cerebral infarction. Figure 3 depicts the comparison of AUC of the study variables and the combined effect. NLR had an AUC value of 0.691 for identifying cerebral infarction, higher than sex (P=0.0341), and smoking (P=0.002). When integrating sex, hypertension, diabetes mellitus, smoking, and NLR, the AUC value of the combined method was 0.785, higher than any separate parameters (P<0.05). 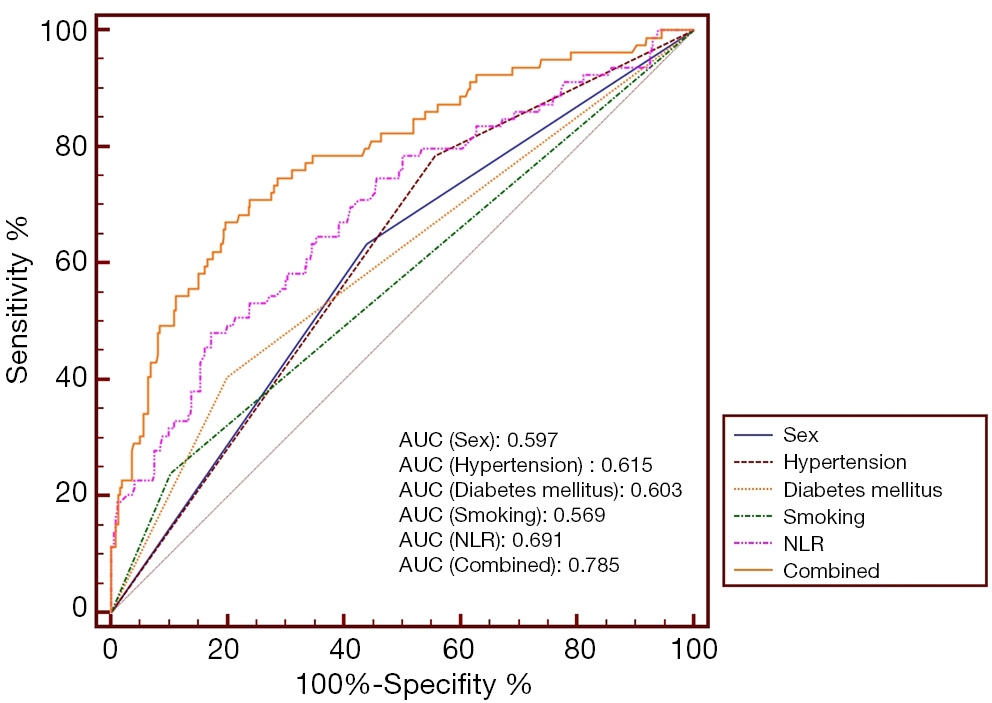 Figure 3 ROC curve analysis of sex, hypertension, diabetes mellitus, smoking, and NLR for identifying cerebral infarction. NLR had an AUC value of 0.691 for identifying cerebral infarction, higher than sex (P=0.0341), and smoking (P=0.002). The AUC value of the combined method was 0.785, higher than any separate parameters (P<0.05).

In our study, the most common nonfocal symptom in suspected cerebral infarction was dizziness, followed by altered consciousness, headache, and memory impairment. Dizziness is a common chief complaint in the ED, responsible for about 4.4 million ED visits in the United States annually (22). Although strokes only account for roughly 3–5% of all ED patients presenting with dizziness (23), the differential diagnosis is a significant and challenging task. HINTS test is a useful tool to discriminate central from peripheral dizziness or vertigo (24). However, there are also limitations to the use of HINTS. HINTS could not be used in acute transient vestibular syndrome patients, whose vestibular symptoms or signs had already resolved when the patients arrived at the hospital (25). Furthermore, the HINTS test maybe poorly performed in the ED department with a non-neuro-ophthalmologist. Altered consciousness, headache, and memory impairment were less commonly observed, but the differential diagnosis was tricky as all these symptoms were frequently unaccompanied by more obvious neurological signs of cerebral infarction (26-28).

We further investigated whether NLR, an inflammatory indicator, could help to predict cerebral infarction confirmed by DWI(+). Our results showed that the cerebral infarction group had higher NLR than the non-cerebral infarction group. A previous study revealed that early elevated NLR was associated with remote DWI(+) lesions in acute intracerebral hemorrhage (32). It is well established that inflammation is acutely involved in the process of ischemic stroke (33). Neutrophils have been reported to increase within 15 minutes of the brain ischemia and could surround the damaged cerebral vessels; they infiltrate after 6–8 hours, peaking at 24–48 hours, while lymphocytes decrease after an ischemic stroke, peaking at 24–48 hour (14). Elevated NLR may represent a marker of tissue inflammation severity due to ischemic injury (34), while the injury was too early to be seen in the CT. A previous study even found that elevated NLR was associated with cerebral infarction volume in DWI (12). Thus, it was conceivable that NLR could elevate in CT-negative cerebral infarction.

Apart from NLR, we also analyzed the value of clinical characteristics in predicting cerebral infarction. Our study found that male sex, hypertension, diabetes mellitus, and smoking status were more commonly observed in the cerebral infarction group. This was reasonable as these medical histories are known risk factors for ischemic stroke even in patients with nonfocal symptoms (35-37). A previous study also found that the presence of hypertension and diabetes mellitus could be used to lower the threshold for ordering a head MRI examination for suspected ischemic stroke with nonfocal symptoms (18).

Further logistic regression analysis revealed that male sex, a history of hypertension, diabetes mellitus, and smoking, and NLR were the best predictors for cerebral infarction. When integrating sex, hypertension, diabetes mellitus, smoking, and NLR, the AUC value of the combined method was 0.785, higher than any separate parameters. As the routine complete blood count is an easy and convenient test to perform, combined with the above-mentioned factors, NLR could be used to help select the most probable suspected cerebral infarction case to have a head MRI for further assessment and confirmation.

Our study had some limitations. First, the study sample may have a selection bias. In our study, head CT and MRI were ordered for the evaluation of suspected cerebral infarction. However, the criteria for ordering head CT and MRI may be different for different hospitals and ED neurologists. Second, the MRI scanning interval time was a little heterogeneous within seven days after head CT. The treatment and condition from the time of patient admission to the MRI examination may affect the NLR value and DWI positivity. However, there was no significant difference in the MRI scanning interval time between the cerebral infarction group and the non-cerebral infarction group. Third, the sample size in this study was small. Prospective studies with larger samples are needed to validate our findings.

Reporting Checklist: The authors have completed the STROBE reporting checklist. Available at http://dx.doi.org/10.21037/atm-20-1640

Conflicts of Interest: All authors have completed the ICMJE uniform disclosure form (available at http://dx.doi.org/10.21037/atm-20-1640). The authors have no conflicts of interest to declare.

Ethical Statement: The authors are accountable for all aspects of the work in ensuring that questions related to the accuracy or integrity of any part of the work are appropriately investigated and resolved. The study was conducted in accordance with the Declaration of Helsinki (as revised in 2013). The study was approved by the Ethics Committee of Shanghai Sixth People’s Hospital (No. YS-2019-001). As this study was retrospective, the requirement for informed consent was waived.