Liver resection is a curative treatment option for patients with solitary hepatocellular carcinoma (HCC) and preserved liver function (1,2). Anatomical resection (AR) including the area covered by the tumor-feeding portal vein was preferred over non-anatomical resection (NAR) as a surgical technique to prevent potential micrometastasis surrounding the tumor because HCC tends to invade intrahepatic vascular structures and is often close to the portal vein (3,4). Despite establishment of improved surgical techniques, tumor recurrence is still a major concern for the long-term survival of patients who undergo liver resection. The recurrence rate of HCC after curative hepatectomy reaches up to 70% within 5 years (5,6). Tumor size, serum alpha-fetoprotein (AFP), protein induced by vitamin K antagonist-II (PIVKA-II), c-reactive protein, alkaline phosphatase, neutrophil to lymphocyte ratio (NLR), and neutrophil to monocyte ratio (NMR) were reported as risk factors of tumor recurrence that can be preoperatively evaluated (7-10). Microvascular invasion (MVI) is also considered an independent prognostic factor predicting HCC recurrence or poor survival in HCC after curative resection, but it is difficult to assess prior to operation. Recently, increasing evidence demonstrates that preoperative 18F-fluorodeoxyglucose (18F-FDG) positron emission tomography (PET)/computed tomography (CT) can predict MVI and early recurrence after liver resection (11-14).

In this study, we assessed whether combined AR with preoperative PET negativity was associated with positive prognostic factors. We also investigated whether AR achieves better oncologic outcomes than NAR regarding preemptive control of MVI among patients with primary solitary HCC and positive PET findings. We present the following article in accordance with the STROBE reporting checklist (available at http://dx.doi.org/10.21037/atm-20-1583).

This study was conducted on patients who underwent liver resection for solitary HCC diagnosed by radiologic imaging at Yeungnam University Medical Center and Samsung Medical Center in Korea between January 2007 and September 2015. HCC patients meeting the following criteria were excluded: history of previous treatments for HCC such as liver resection, transarterial chemoembolization, percutaneous ethanol injection, radiofrequency ablation (RFA), and radiation therapy; concurrent intraoperative RFA; combined HCC and cholangiocarcinoma on pathology; loss to follow-up after liver resection; no PET/CT performed for preoperative assessment; and multiple HCCs on pathology. As a result, this study included 259 treatment-naïve HCC patients who underwent preoperative PET/CT and subsequent curative liver resection as a primary treatment at two institutions. Baseline demographic, laboratory, pathologic, and surgical data were retrospectively collected and analyzed from the electronic medical record. Patients were divided into four groups according to preoperative PET uptake and liver resection type (AR or NAR): Group 1 (PET-negative and AR); Group 2 (PET-negative and NAR); Group 3 (PET-positive and AR); Group 4 (PET-positive and NAR). The study was conducted in accordance with the Declaration of Helsinki (as revised in 2013). The institutional review boards of Samsung Medical Center (number 2016-08-161) and Yeungnam University Medical Center (number 2019-02-041) approved this study. Individual informed consent was waived because of the retrospective nature of the study.

The main purpose of our study was to compare recurrence-free survival (RFS) and overall survival (OS) among four groups and to identify the combined impact of AR and preoperative PET positivity on long-term oncologic outcomes in patients with primary solitary HCC. Liver-related mortality was defined as death from HCC recurrence after hepatectomy, as well as death caused by hepatectomy-related complications including hepatic failure, sepsis due to bile leakage, and postoperative bleeding. AR was defined as complete resection of an anatomic region demarcated by preceding ischemia, along with division of the Glisson associated with tumor location. With solitary HCC located peripherally or presenting with exophytic growth, NAR was performed when patients required limited resection due to insufficient liver function or remnant liver volume. By comparing pre- and postoperative CT of each patient, the resection type was evaluated to conform to the definition of AR identifying the location of the tumor, the extent of the resected liver parenchyme, and the ligated portal pedicle. Major hepatectomy was defined as removal of 3 or more liver segments (15). The histologic grade of HCC was evaluated according to Edmonson-Steiner grade (E-S grade) as ‘well differentiated’ (grade I), ‘moderately differentiated’ (grade II), or ‘poorly differentiated’ (grade III, IV) (16). 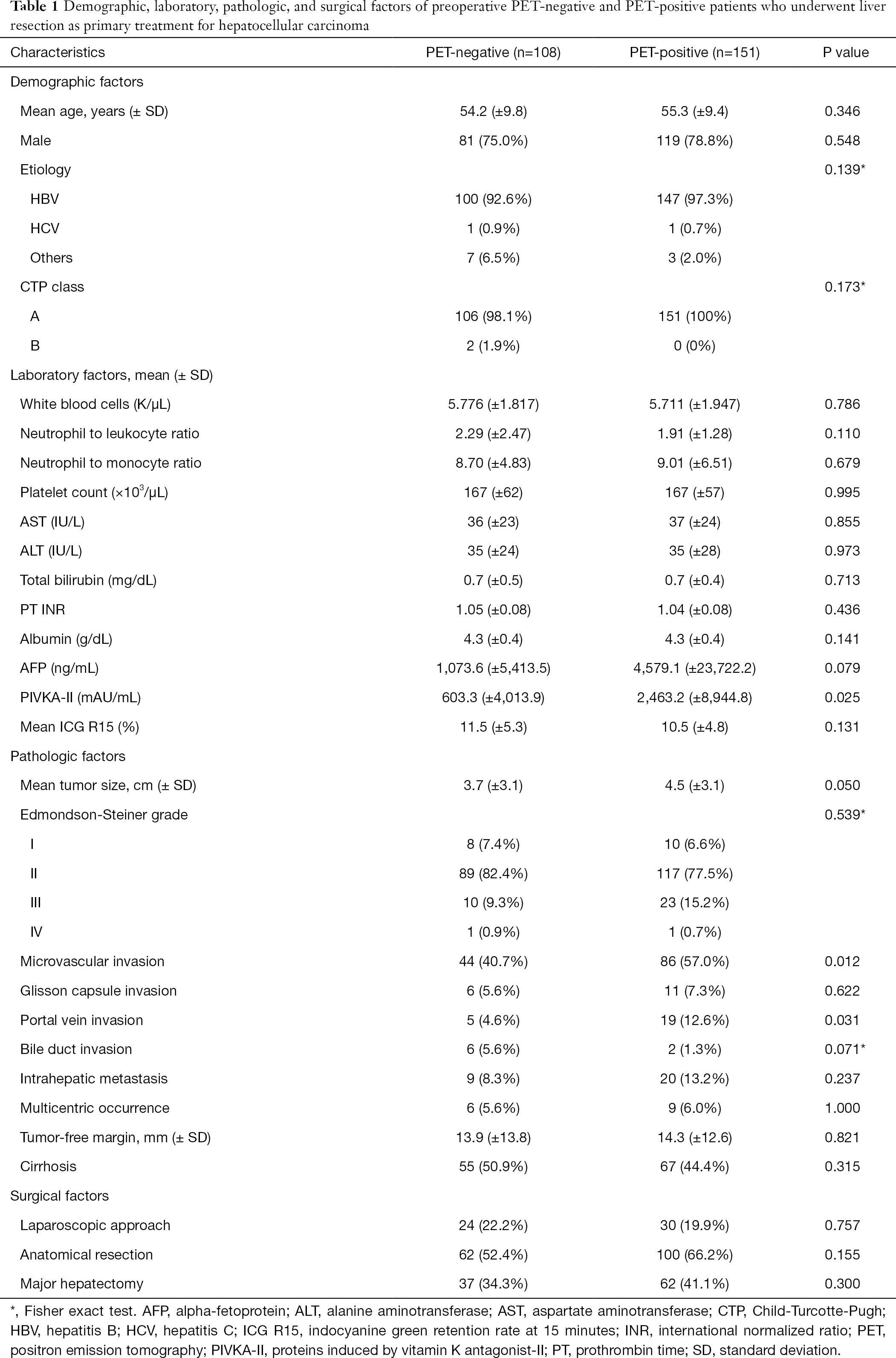 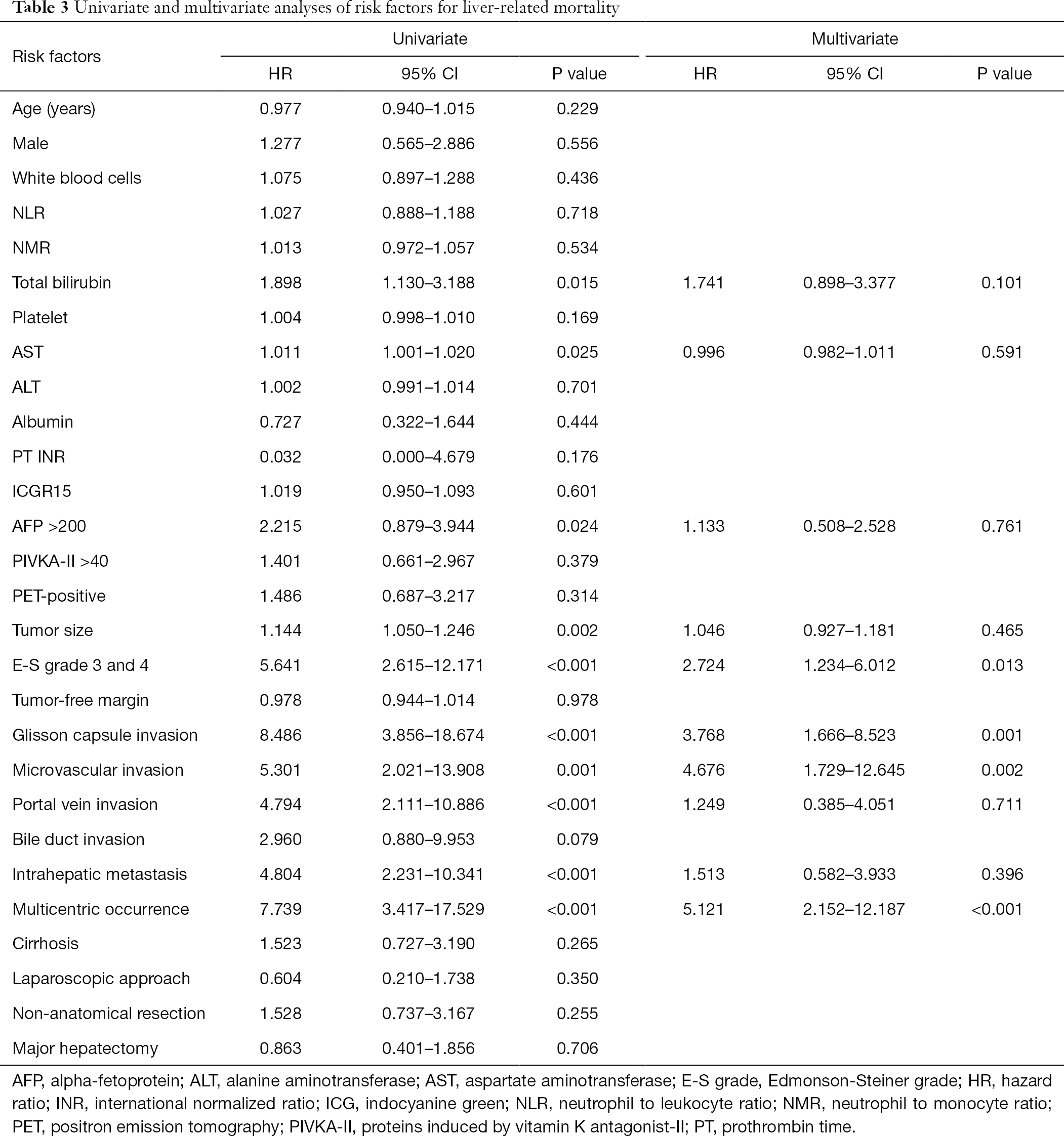 Four groups divided according to preoperative PET uptake and AR did not show statistically significant differences in pathologic factors including E-S grade, Glisson capsule invasion, MVI, intrahepatic metastasis, and multicentric occurrence (P=0.387, P=0.614, P=0.057, P=0.480, and P=0.659, respectively; Table 4). Kaplan-Meier analysis revealed that the RFS and OS of AR were not significantly different from those of NAR among PET-negative groups (P=0.100, Figure 2A and P=0.142, Figure 2B, respectively) and among PET-positive groups (P=0.743, Figure 2C and P=0.630, Figure 2D, respectively). In Kaplan-Meier analysis among four groups, Group 1 (PET-negative and AR) showed remarkably better RFS than Group 3 (PET-positive and AR) and Group 4 (PET-positive and NAR) (P=0.045, P=0.023, respectively; Figure 3). In subgroup analysis based on tumor size, Group 1 patients with HCC over 3 cm showed significantly better RFS than Group 2 (P=0.047, Figure 4), and Group 3 patients with HCC under 3 cm had remarkably better RFS than Group 4 (P=0.016, Figure 4). There was no significant difference among subgroups in Kaplan-Meier analysis for OS (Figure 5). 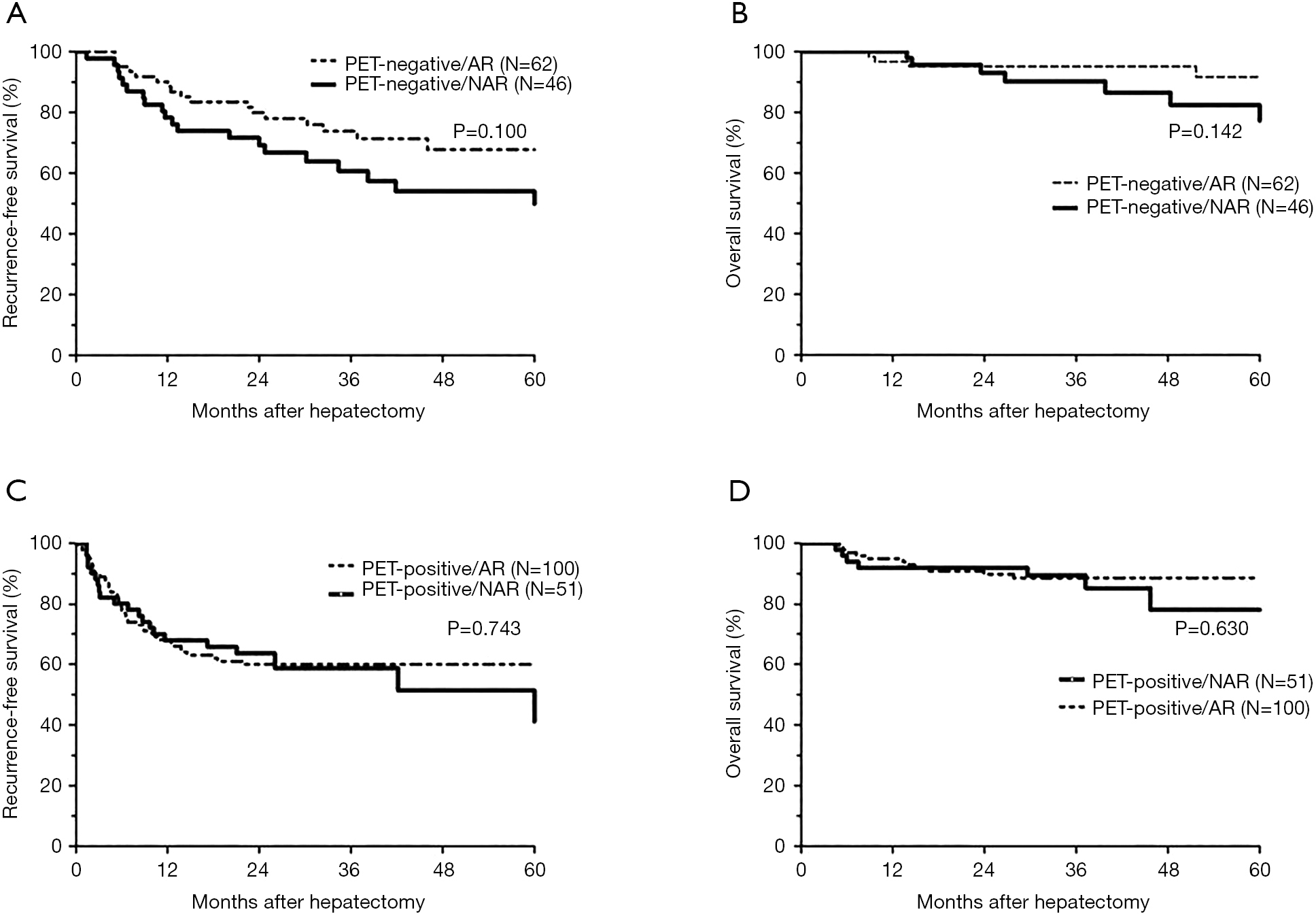 Figure 3 Recurrence-free survival (A) and overall survival (B) of four groups. 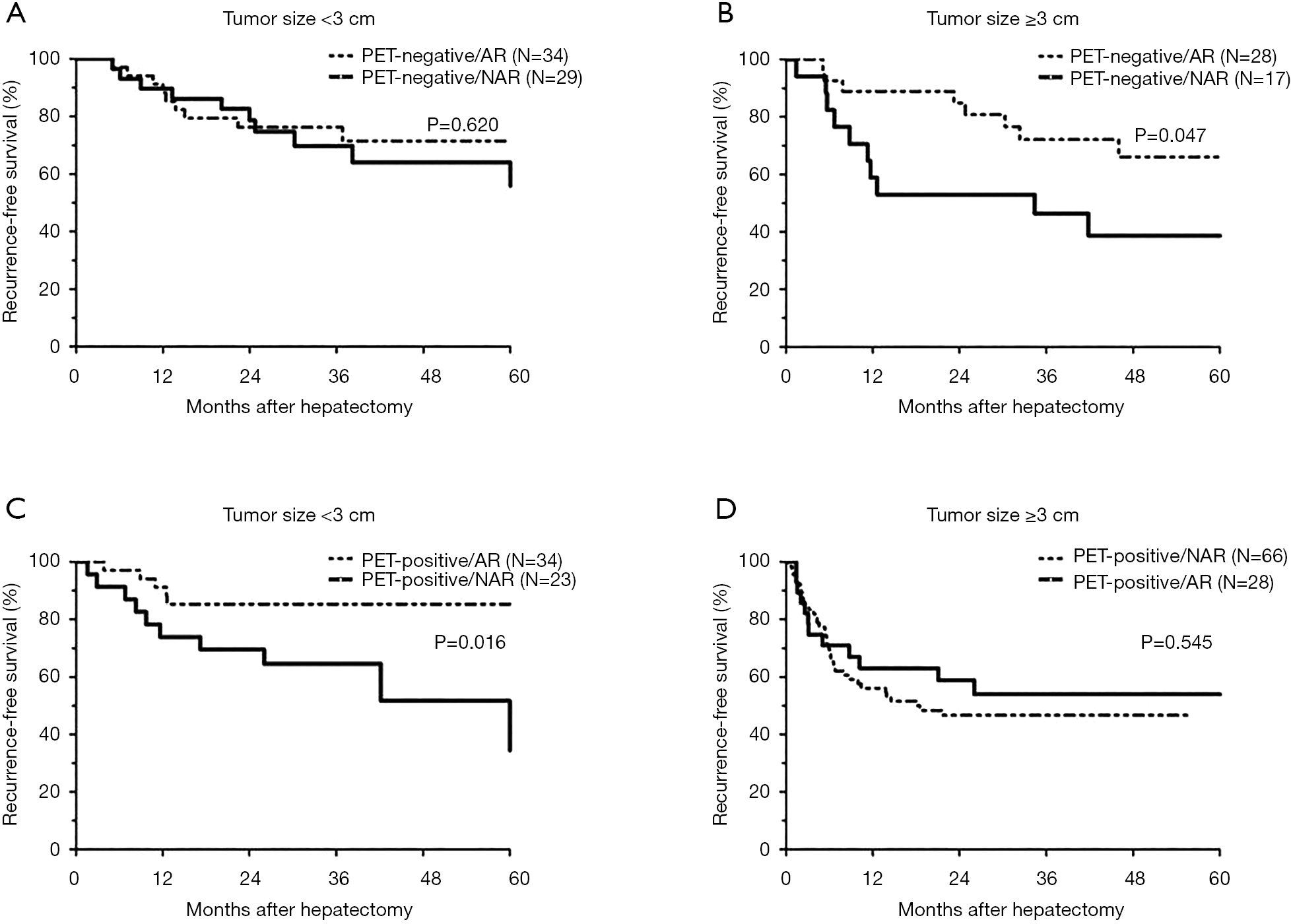 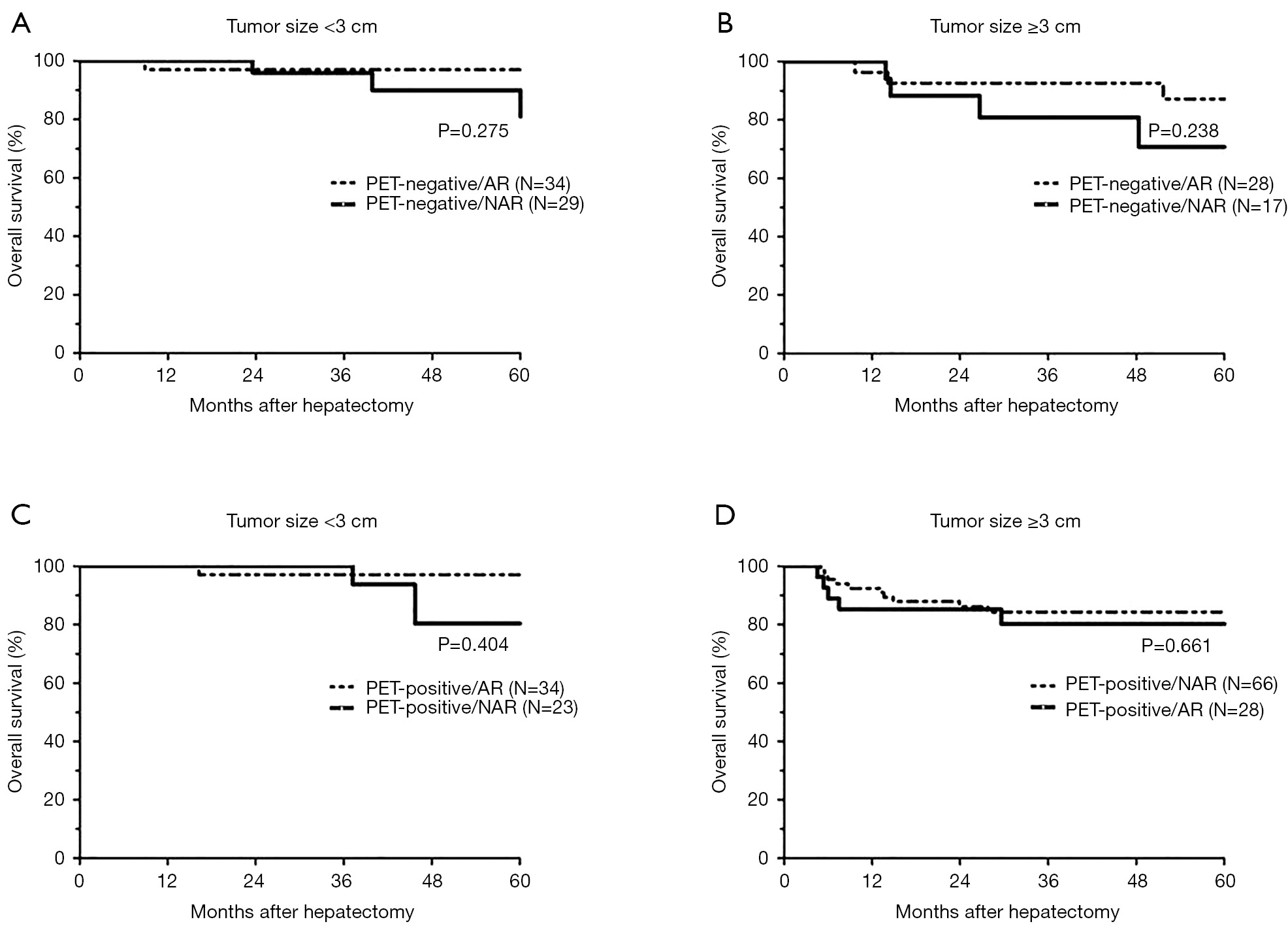 MVI is an independent predictor of HCC recurrence and is related to poor outcome and low survival rates after liver resection (17,18). Therefore, detection of MVI is important to predict the prognosis of patients with HCC at the beginning of treatment. In previous conventional imaging studies, MVI is indirectly predicted based on capsule disruption, irregular tumor margin, and peritumoral enhancement (17). In a recent study, Kim et al. reported that the presence of peritumoral hypointensity on hepatobiliary phase of Gadoxetic acid-enhanced magnetic resonance imaging (MRI) showed high specificity (93.2%) and a positive predictive value of 88.5%. Kim et al. concluded that peritumoral hypointensity on hepatobiliary phase of gadoxetic acid-enhanced MRI can be useful preoperative predictor of MVI in HCC patients (19). Tumor markers including AFP and PIVKA-II are also adopted to evaluate the biological aggressiveness of HCC prior to surgical resection. PIVKA-II is more sensitive and specific than AFP because it is associated with tumor growth rate, increased cellular proliferation, infiltrative pattern, and vascular invasion. However, these time-dependent laboratory tests cannot determine whether or not MVI has occurred, and they only assess the effects of treatment or whether the disease is stationary or progressing.

Since 18F-FDG PET/CT shows relatively high physiologic liver uptake and variable uptake in HCC resulting from increased glucose-6-phosphatase activity in normal liver tissues, it has limited use for primary diagnosis of HCC (20). Previous studies have already shown that high standard uptake value (SUV) on PET was significantly associated with high-grade tumor differentiation and was a poor prognostic factor following liver resection for HCC. Lin et al. concluded that the ratio of maximal tumor SUV to mean normal liver SUV of 18F-FDG PET/CT was an independent predictor of MVI (21). Thus, increasing evidence has accumulated demonstrating that positive PET findings can predict MVI (11,17,22) based on the close correlation between MVI and poor tumor grade (23-25).

In the present study, patients with PET-positive HCC tended to have significantly higher PIVKA-II (P=0.025), portal vein invasion (P=0.031), and MVI (P=0.012) than patients with PET negative HCC (Table 1). This implies that positive PET findings reflect more aggressive HCC biology. However, in multivariate analysis, our study failed to prove that PET positivity was an independent prognostic factor for HCC recurrence and liver-related mortality. Kaplan-Meier analysis for RFS identified a tendency for higher relapse in the PET-positive group (P=0.055, Figure 1A).

AR is preferred for HCC that tends to invade into tumor-feeding vascular structures and theoretically can achieve better oncologic outcomes than NAR. However, there is little clinical evidence that AR is superior to NAR in the long-term survival of HCC patients with preserved liver function (26,27). A recent multicenter-based collaboration study using propensity score matching concluded that AR decreases HCC recurrence and improves OS in patients with a primary solitary HCC <5.0 cm in diameter (28). In real clinical situations, AR is not applicable to all patients with HCC because of poor liver function, unfavorable tumor location, or insufficient remnant liver volume. Therefore, it is important to make surgical plans according to preoperative assessment for vascular invasion by tumor.

We analyzed long-term oncologic outcomes of AR versus NAR in patients with solitary HCC who were preoperatively evaluated by PET/CT uptake as a surrogate marker of vascular invasion. As shown in Figure 2, AR and NAR in the PET-negative group did not show any significant differences in RFS (P=0.100) and OS (P=0.142). However, the RFS of PET-negative HCC patients who underwent AR was significantly higher than that of PET-positive HCC patients who underwent AR (P=0.045) and NAR (P=0.023). This result supports that AR for PET-negative HCC might be associated with positive prognosis to prevent recurrence after hepatectomy for solitary HCC. Both MVI and tumor size are known to reflect oncologic properties. MVI is confirmed by invasion on pathologic study, but our study proved that PET positivity can predict the presence of MVI without tissue confirmation. When tumor size and PET positivity were subdivided, AR had better RFS than NAR. For example, AR had better RFS than NAR in the subgroup with HCC over 3 cm and PET negativity (Figure 4B) than in the subgroup with HCC under 3 cm and PET positivity (Figure 4C). In other words, in HCC patients whose tumors are too aggressive or too mild, AR may not be superior to NAR. Therefore, although there is selection bias due to the nature of the retrospective study, it can be said that this study has clinical implications to help the surgeon choose the resection type (AR vs. NAR) by assessing the biological characteristics of the tumor shown in preoperative tests including PET.

A major limitation of our study is the inability to determine PET positivity according to the cut-off value using SUV. Instead of measuring SUV, we visually interpreted the presence of FDG uptake to compare the difference in metabolic activity between tumor and normal liver tissue. In addition, our study had a retrospective design with a relatively short follow-up period. There could be potential selection bias due to inclusion of patients with solitary HCC who underwent 18F-FDG PET/CT prior to hepatectomy. Further prospective studies with long-term follow-up in a larger cohort are necessary to confirm our results.

In conclusion, we identified that 18F-FDG uptake of HCC on preoperative PET predicts MVI in hepatectomy patients. In addition, preoperative PET/CT can provide useful clinical information about prognosis after liver resection for HCC, reflecting aggressiveness and tumor differentiation. Although AR and PET negativity were not independent factors affecting HCC recurrence, a combination of AR and PET negativity might indicate good prognosis in long-term outcomes. Finally, AR decreases the risk of tumor recurrence in patients with a solitary PET-positive HCC less than 3 cm.

This work was supported by the 2019 Yeungnam University Research Grant.

Reporting Checklist: The authors have completed the STROBE reporting checklist. Available at http://dx.doi.org/10.21037/atm-20-1583

Conflicts of Interest: All authors have completed the ICMJE uniform disclosure form (available at http://dx.doi.org/10.21037/atm-20-1583). The authors have no conflicts of interest to declare.

Ethical Statement: The authors are accountable for all aspects of the work in ensuring that questions related to the accuracy or integrity of any part of the work are appropriately investigated and resolved. The study was conducted in accordance with the Declaration of Helsinki (as revised in 2013). The study protocol was approved by the institutional review boards of Samsung Medical Center (number 2016-08-161) and Yeungnam University Medical Center (number 2019-02-041). Individual informed consent was waived because of the retrospective nature of the study.