Acute ischemic stroke (AIS), a serious epidemic issue, is the second leading cause of death and long-term disability worldwide (1,2), and it places a tremendous burden on both healthcare systems and socioeconomic development (3). Endovascular therapy (EVT) is one of the established treatments for eligible AIS patients (4). With successful recanalization, most AIS patients with large vessel occlusion (LVO) can obtain benefits (5,6). Prior studies in AIS patients with EVT have identified patient-specific factors and procedural considerations as potential predictors of poor outcome or death (7-9). However, the simple and high-sensitivity hematological indexes leading to functional dependence remain unknown.

Inflammation plays an important role in the pathogenesis of AIS (10). Previous research has suggested that cerebral ischemia triggers inflammatory responses via the upregulation of acute-phase proteins such as C-reactive protein (CRP) (11). CRP, a nonspecific biomarker of inflammation, has been proposed to be an indicator of atherosclerosis and a predictor of both cardiovascular and cerebrovascular endpoints (12). A high-sensitivity CRP (hs-CRP) assay quantifies smaller incremental changes in inflammation and is more clinically relevant than CRP for evaluating the relationship between acute inflammation and prediction of the degree of long-term disability (13).

This study was based on a prospective registry study in Xuanwu Hospital, Capital Medical University in Beijing, China, and it was conducted in accordance with the Declaration of Helsinki (as revised in 2013). All consecutive AIS patients receiving EVT in our center were registered in this prospectively collected registry, which was approved by the Ethics Committee of Xuanwu Hospital (No. 2017030), and informed consent was obtained from all the patients.

AIS patients with LVO were treated with EVT following the guidelines as soon as possible after symptom onset (4). For the present study, we enrolled AIS patients treated with EVT from December 2012 to January 2019. The inclusion criteria of this study were as follows: (I) diagnosis of AIS and (II) LVO in the anterior circulation confirmed by computed tomographic angiography, magnetic resonance angiography or digital subtraction angiography. The exclusion criteria were posterior circulation strokes and loss to follow-up.

Based on the regulations of our center, only neurointerventionists who were trained in the technique of performing extracranial and intracranial stents were qualified to perform EVT. All procedures were performed under local or general anesthesia. Digital subtraction angiography was performed to determine the occlusion sites. Other specific intervention strategies, the type of stent retrievers, and other devices were chosen at the discretion of the treating neurointerventionist. Heparin was administered intravenously to maintain the activated coagulation time between 250 and 300 s during the procedure unless intravenous thrombolysis was implemented. After EVT, all patients were transferred to the neurological intensive care unit or acute stroke unit for further treatment.

Hs-CRP levels were measured as part of routine laboratory testing for patients with AIS on admission. Hs-CRP assays were performed using the immunoturbidimetric assay. We conducted a laboratory calibration study to evaluate possible differences in hs-CRP measurements between laboratories, specimen types, assay methods, instruments, and time of measurement and found that differences in hs-CRP were not large enough to warrant calibration.

Clinical outcomes were evaluated using the modified Rankin Scale (mRS) score. The mRS score is based on a 7-point scale, ranging from 0 (no symptoms) to 6 (death) (22). Clinical outcomes included the rates of favorable outcome (mRS, 0–2), no or minimal disability (mRS, 0–1), and mortality (mRS, 6) at 90 days as well as during long-term follow-up. In this study, an mRS score of 0–2 indicated a favorable outcome, while an mRS score of 3–6 indicated an unfavorable outcome. Outcome assessments were performed via telephone or in-person interviews by the independent evaluators who were unaware of the clinical information.

To minimize the potential bias and adjust for confounders, a multivariable logistic regression analysis was conducted with favorable outcome at 90 days as the dependent variable and with age, male sex, NIHSS score, ASPECTS, atrial fibrillation, hs-CRP levels, time from stroke onset to recanalization, recanalization condition, and symptomatic intracranial hemorrhage (sICH) as the covariates. Additionally, receiver operating characteristic (ROC) curve analysis was performed based on the significant predictors of favorable outcome in the logistic regression analysis. The area under the curve (AUC) and Youden’s index were further calculated to determine the cutoff value. Then, patients were divided into two groups according to the cutoff value, and the clinical outcomes at the 90-day and long-term follow-up were compared between the two groups. Furthermore, Kaplan-Meier survival analysis was performed to compare the survival probability at long-term follow-up using the log-rank test. 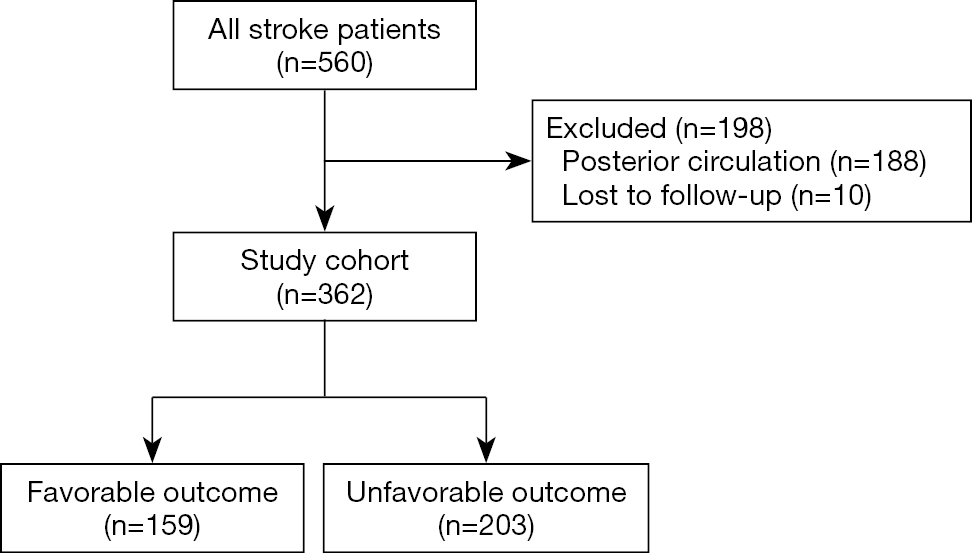 Figure 1 Flowchart of patients included in this study. 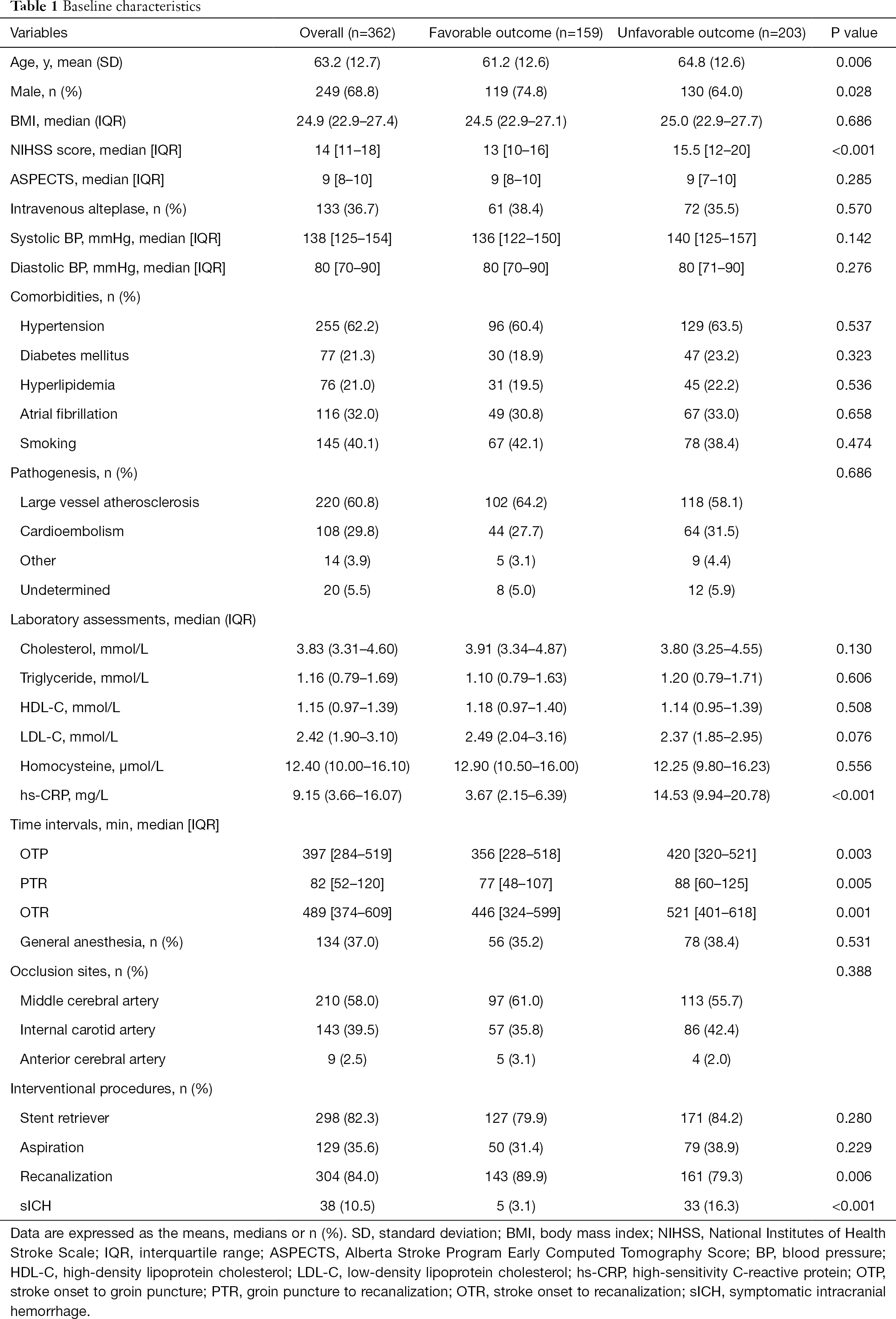 Of the 560 patients who underwent EVT from December 2012 to January 2019 in our institution, 198 patients were excluded (188 patients had posterior circulation strokes, and 10 patients were lost to follow-up). Thus, a total of 362 patients were included for further analysis (Figure 1). 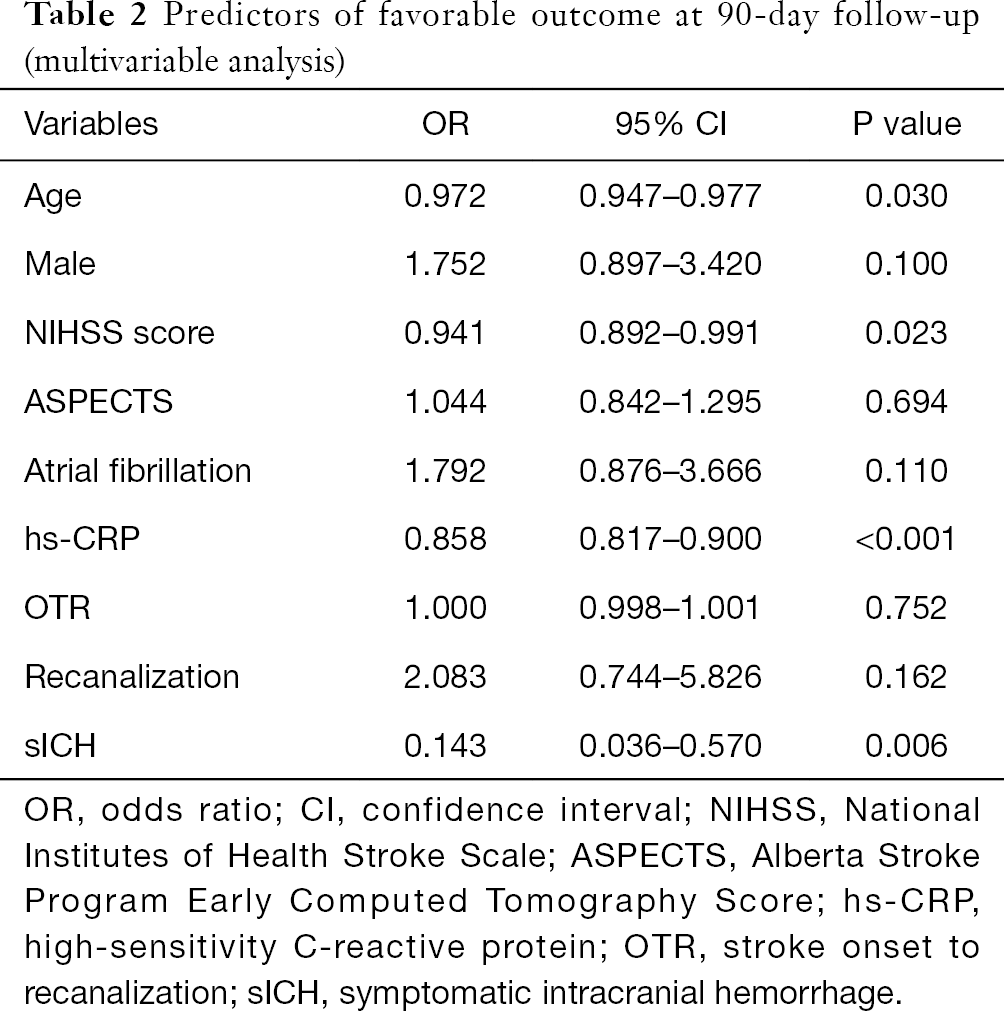 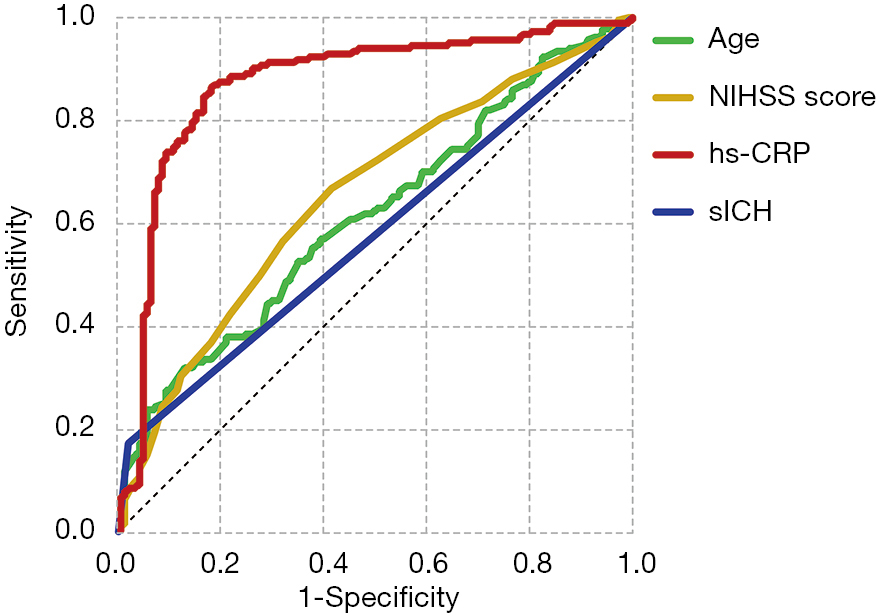 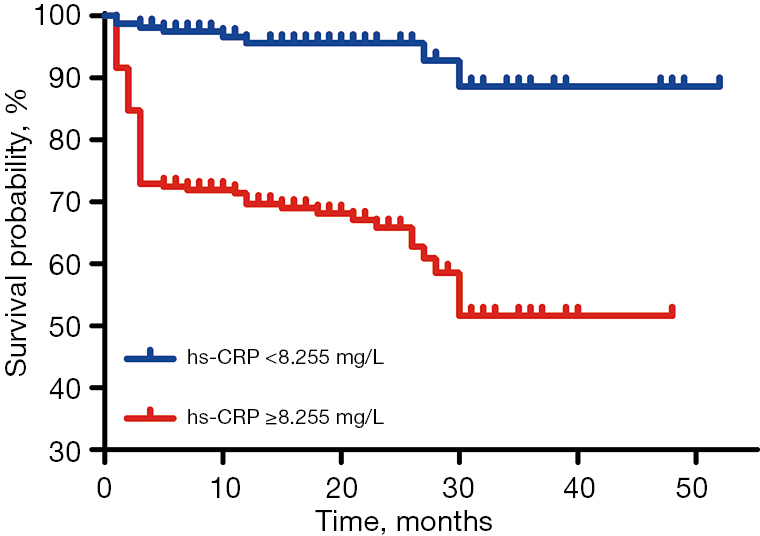 Hs-CRP is a sensitive marker of inflammation in the arterial wall (12). Increased hs-CRP levels can reflect the pre-existing situation of the presence of vascular risk factors, as it is related to inflammation of vascular stenosis or occlusion and tissue injury (23). Cerebral ischemic injury can trigger inflammatory processes that evoke acute-phase proteins and inflammatory cytokines (24), and patients with larger infarct volumes have a greater neurological deficit and worse functional outcomes (25). Thus, the hs-CRP concentration can, in part, reflect the severity of stroke.

In the present study, elevated hs-CRP levels were associated with poor prognosis at 90-day and long-term follow-up. In line with our findings, the Circulatory Risk in Communities Study (CIRCS) demonstrated a positive association between hs-CRP levels and ischemic stroke in middle-aged Japanese men and women (26). Our findings also corroborate a previous study suggesting that hs-CRP is independently predictive of all-cause mortality (23). However, in the Northern Manhattan Study (NOMAS) (27), a hs-CRP level >3 mg/L was associated with ischemic stroke risk in the model adjusted for demographics, but these effects did not persist after controlling for other potential risk factors. The absence of an association with stroke may reflect the heavy risk factor burden; the prevalence of diabetes mellitus and hypertension in the NOMAS vs. our study was 21.5% vs. 21.3% and 74.6% vs. 62.2%, respectively. Other studies similarly found a difference in effect based on the presence or absence of other risk factors. In the Honolulu Heart Study (28), hs-CRP was not associated with stroke among men with hypertension or diabetes or among those aged >55 years. Previous studies have demonstrated that advanced age, hypertension, obesity, diabetes, total cholesterol levels, and lower high-density lipoprotein cholesterol (HDL-C) levels were associated with elevated hs-CRP levels (12,27).

In this study, we investigated AIS patients with LVO in the anterior circulation. A previous study demonstrated that hs-CRP levels were elevated in all TOAST (the Trial of Org 10172 in Acute Stroke Treatment) subtypes (29), especially in patients with large artery atherosclerosis. Rajeshwar et al. (30) found no significant association between hs-CRP levels and the prognosis of patients with lacunar infarcts after 3 months, but in patients with LVO, the association was positive. This was probably because LVO was associated with a larger infarct volume and stronger activation of inflammation than small artery occlusion, which was also associated with changes in hs-CRP.

Although the pathophysiological association between hs-CRP and LVO is unclear, different mechanisms may be involved. Hs-CRP is related to focal inflammation, and the inflammatory response plays an important role in patients with LVO, as it is associated with stenosis or occlusion of intracranial or extracranial large arteries, unstable plaque, artery-to-artery embolism and hypoperfusion (31). On the other hand, hs-CRP can bind to the plasma membranes and small nuclear ribonucleoprotein particles in the exposed nuclei of damaged cells (32). After such binding, the classical complement pathway can be activated, which may therefore contribute to ischemic tissue damage. A combination of these mechanisms may better explain the association between hs-CRP and LVO. Further experiments are needed to confirm the exact mechanism of prognosis.

Furthermore, the hs-CRP measurement time point at which clinical outcomes are most emblematic has not been established. In this study, the hs-CRP concentration was measured immediately upon admission. The serum hs-CRP concentration increases early and remains elevated above control values at 3 months after the index stroke (33), but to what extent the elevation reflects the inflammatory response to stroke is unclear. Previous studies suggested the usefulness of a sample taken within 12 to 72 hours after stroke onset (18,34,35). Di Napoli et al. (36) measured serum hs-CRP within 24 hours after index ischemic stroke, within 48 to 72 hours, and at hospital discharge; they found that hs-CRP at hospital discharge was the strongest independent marker of adverse outcome (hazard ratio, 7.42; 95% CI, 2.75–20.03; P=0.0001), whereas further investigation suggested that the peak measurement in the first week after stroke onset was particularly valuable in relation to infarct volume and clinical outcomes (33). It is possible that discharge concentrations more closely reflect the baseline inflammatory status of the patients, and thus their intrinsic risk caused by inflammatory activity. Further prospective investigations of the optimal timing of hs-CRP for use as a prognostic marker after AIS with EVT are warranted.

This study has certain limitations. The nonrandomized single-center design of our study had limitations in nature, and the sample population cannot represent the general population of AIS with EVT. In view of the changes in the time window of EVT for AIS patients in recent years, the median time from stroke onset to recanalization in this study has exceeded 8 hours, which is inconsistent with the traditional 8-hour time window in most previous studies. Therefore, care should be taken in generalizing these results to settings where time to recanalization is shorter, and future studies are needed to further verify our conclusions. Moreover, the timing of plasma sampling concerning stroke onset may have influenced our findings; thus, serial hs-CRP measurements should be performed. As dynamic change measurement of hs-CRP may provide more prognostic relevance in AIS, standardized serial measurements of hs-CRP concentration should be the focus in future studies to determine whether dynamic changes are related to prognosis. Finally, although multivariable logistic regression analysis was performed to adjust for relevant variables, unmeasured and residual confounding factors remained.

Our present study demonstrated that hs-CRP levels were associated with clinical outcomes of AIS patients undergoing EVT with LVO in the anterior circulation. These results need to be further verified in larger multicenter prospective studies.

Reporting Checklist: The authors have completed the STROBE reporting checklist. Available at http://dx.doi.org/10.21037/atm-20-3820

Conflicts of Interest: All authors have completed the ICMJE uniform disclosure form (available at http://dx.doi.org/10.21037/atm-20-3820). The authors have no conflicts of interest to declare.

Ethical Statement: The authors are accountable for all aspects of the work in ensuring that questions related to the accuracy or integrity of any part of the work are appropriately investigated and resolved. The study was conducted in accordance with the Declaration of Helsinki (as revised in 2013). The study was approved by the Ethics Committee of Xuanwu Hospital (No. 2017030), and informed consent was taken from all the patients.