Previous studies have reported that the incidence of AKI-D is remarkably higher in coronary artery disease (CAD) patients with advanced kidney disease (AKD) than in those without AKD (8). However, most trials involving patients undergoing CAG have either excluded or failed to properly investigate patients with AKD (10-13). Moreover, the relationship between AKI-D and prognosis after hospital discharge is not yet fully understood.

To address these gaps in our knowledge, this study aimed to examine the association of AKI-D with 90-day mortality among CAD patients complicated with AKD. We present the following article in accordance with the STROBE reporting checklist (available at http://dx.doi.org/10.21037/atm-20-6365).

The study cohort was derived from a retrospective cohort in a previous study that enrolled 1030 patients who underwent CAG and had AKD at Guangdong Provincial People’s Hospital between January, 2008, and December, 2018 (NCT04407936). Patients who had a pre-angiography estimated glomerular filtration rate (eGFR) <30 mL/(min·1.73 m2) along with complete pre-angiography data and available follow-up data were eligible for inclusion in this study. Patients who were not diagnosed with CAD by CAG (n=116), who were lost to follow-up (n=111), or who received dialysis before angiography (n=200) were excluded. Finally, 603 eligible patients were included in the study (Figure 1). The study protocol was approved by Guangdong Provincial People’s Hospital (No. GDREC2019555H), and the study was performed in accordance with the Declaration of Helsinki (as revised in 2013). Individual consent for this retrospective analysis was waived. 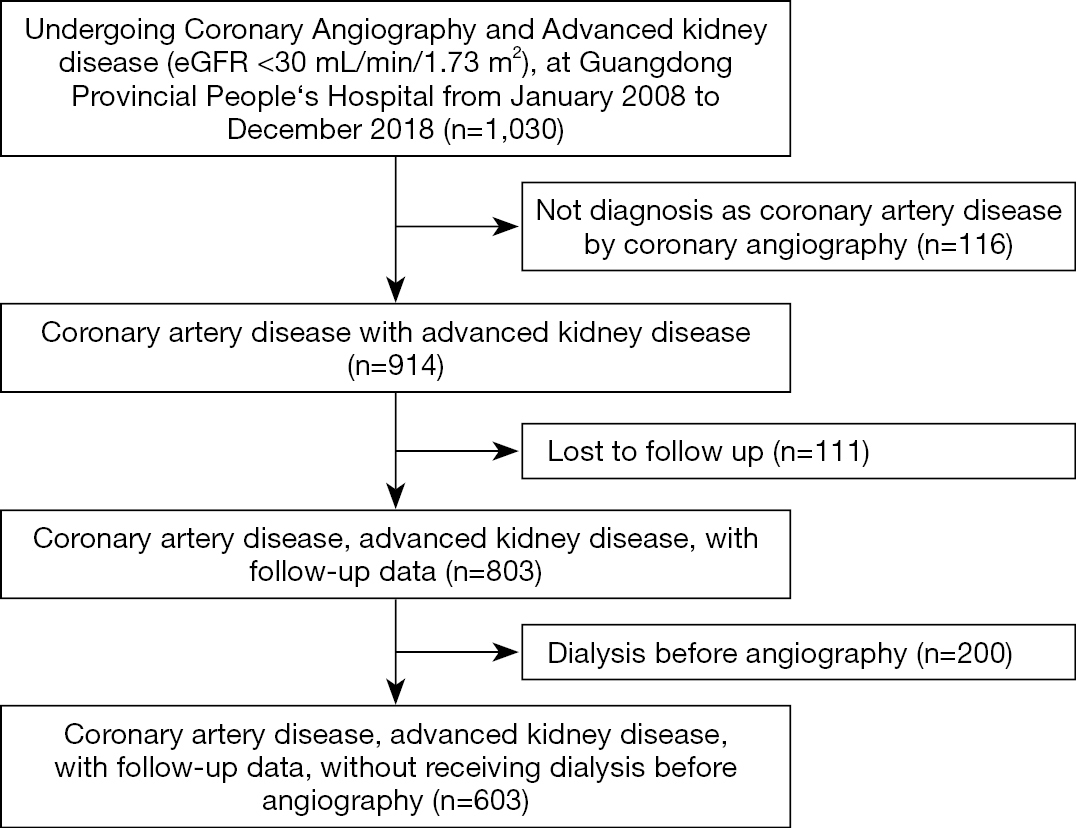 CAG or percutaneous coronary intervention (PCI) was performed according to standard clinical practice using standard guide catheters, balloon catheters, and guide wires (14,15). As part of routine therapy, all patients were given an infusion of isotonic saline at a rate of 0.5–1 mL/kg/h, which was initiated 12 h before the procedure (16). The dialysis treatment strategy was left to the discretion of the treating cardiologist according to clinical protocols based on guidelines (17,18). The patients were followed up through telephone contact and interviews by medical assistants or nurses, and the follow-up data were recorded.

The primary exposure variable for the current analyses was the development of AKI-D, which was defined as acute or worsening renal failure requiring renal dialysis (2). AKD was defined as eGFR <30 mL/(min·1.73 m2), which was calculated using the Modification of Diet in Renal Disease (MDRD) formula (19). Congestive heart failure (CHF) was defined as New York Heart Association (NYHA) class >2 or Killip class >1. Hypertension was deemed to be definitively present if the participant was under treatment with antihypertensive medication, or had systolic blood pressure ≥140 mmHg or diastolic blood pressure ≥90 mmHg (20). The study’s primary outcome was all-cause mortality within 90 days.

The demographic, laboratory, clinical, and procedural characteristics of the study population were summarized using descriptive statistics. Descriptive statistics were reported as the mean (SD), median [interquartile range (IQR)], or number and percentage where appropriate. The characteristics of patients who did and patients who did not receive postoperative dialysis were compared using the unpaired Student’s t-test, the Wilcoxon rank-sum test, or the chi-square test for normally distributed, nonnormally distributed, and categorical data, respectively. The survival analysis for all-cause mortality was performed using the Kaplan-Meier method in the two groups according to the presence of AKI-D, and the log-rank test was used to evaluate the differences in survival between the two groups.

Univariate and multivariate Cox proportional hazards models were used to investigate the associations of postoperative initiation dialysis with 90-day all-cause mortality. To explore the impact of postoperative initiation of dialysis on prognosis, multivariable Cox regression analyses were carried out with adjustment for the following: baseline characteristics including age, sex, diabetes mellitus, and hypertension (model 1); acute coronary syndrome (ACS) and CHF (model 2); eGFR (model 3); the combination of ACS, CHF, and eGFR (model 4). Hazard ratios (HR) and 95% confidence intervals (CIs) were calculated. Finally, the attenuation effect, which was defined as the residual effect of AKI-D on the 90-day mortality after adjustment for the 4 models were analysed as described by Kershaw et al. (21). The data were analyzed on an available case basis and missing data were not imputed.

All statistical analyses were performed using SAS (ver. 9.4) and R (ver. 4.0.1). A P values <0.05 was considered to represent statistical significance. 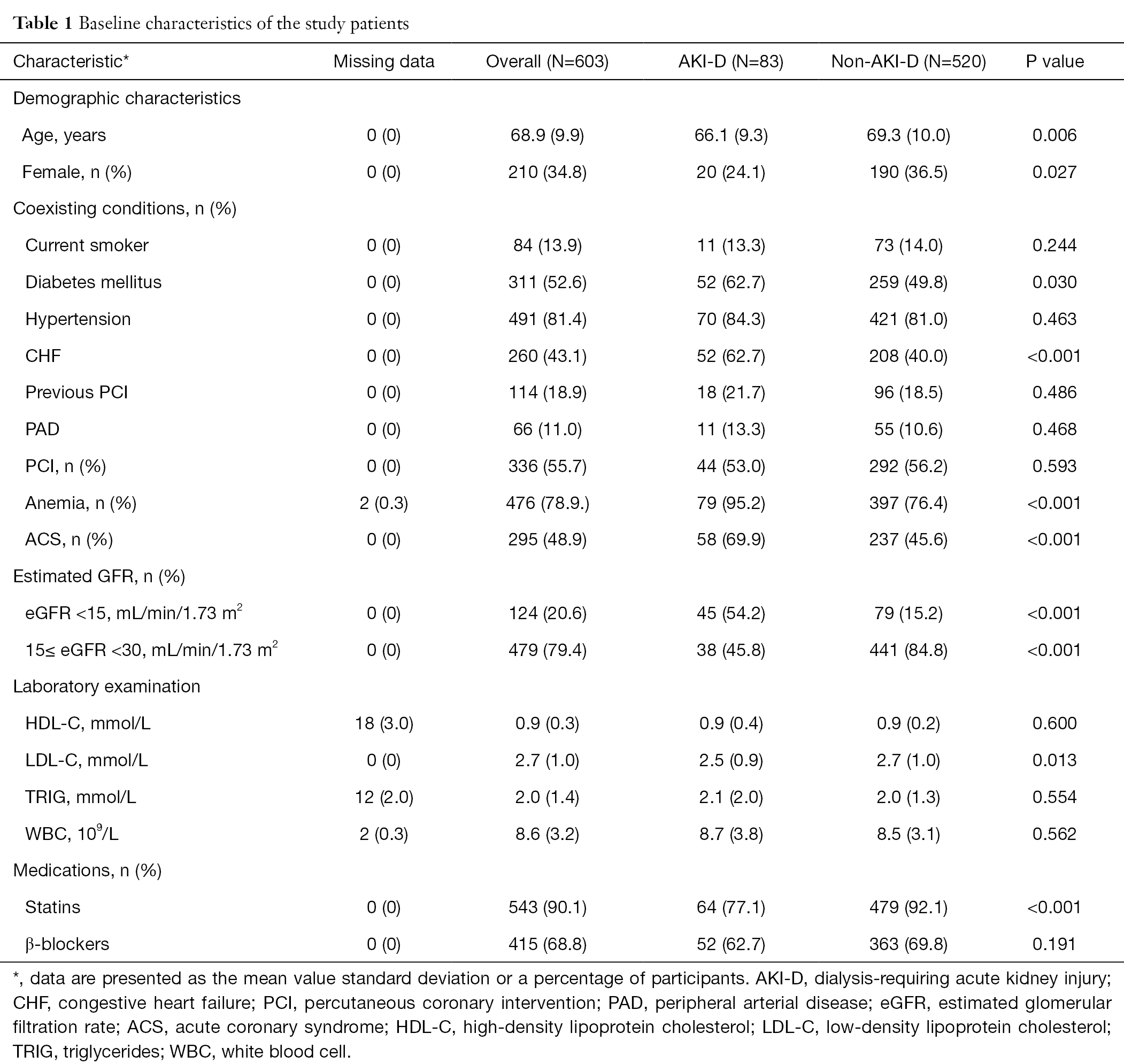 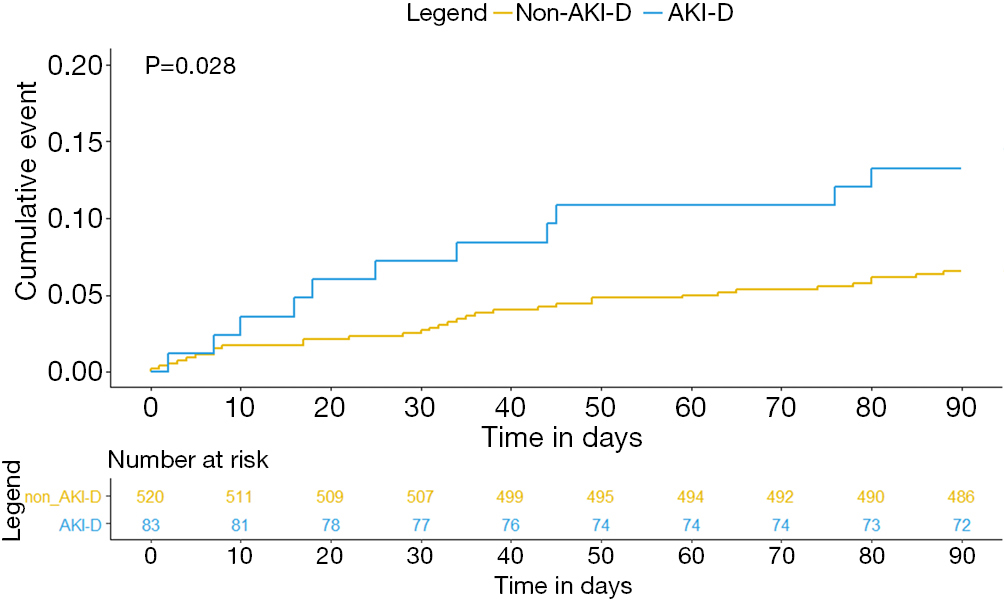 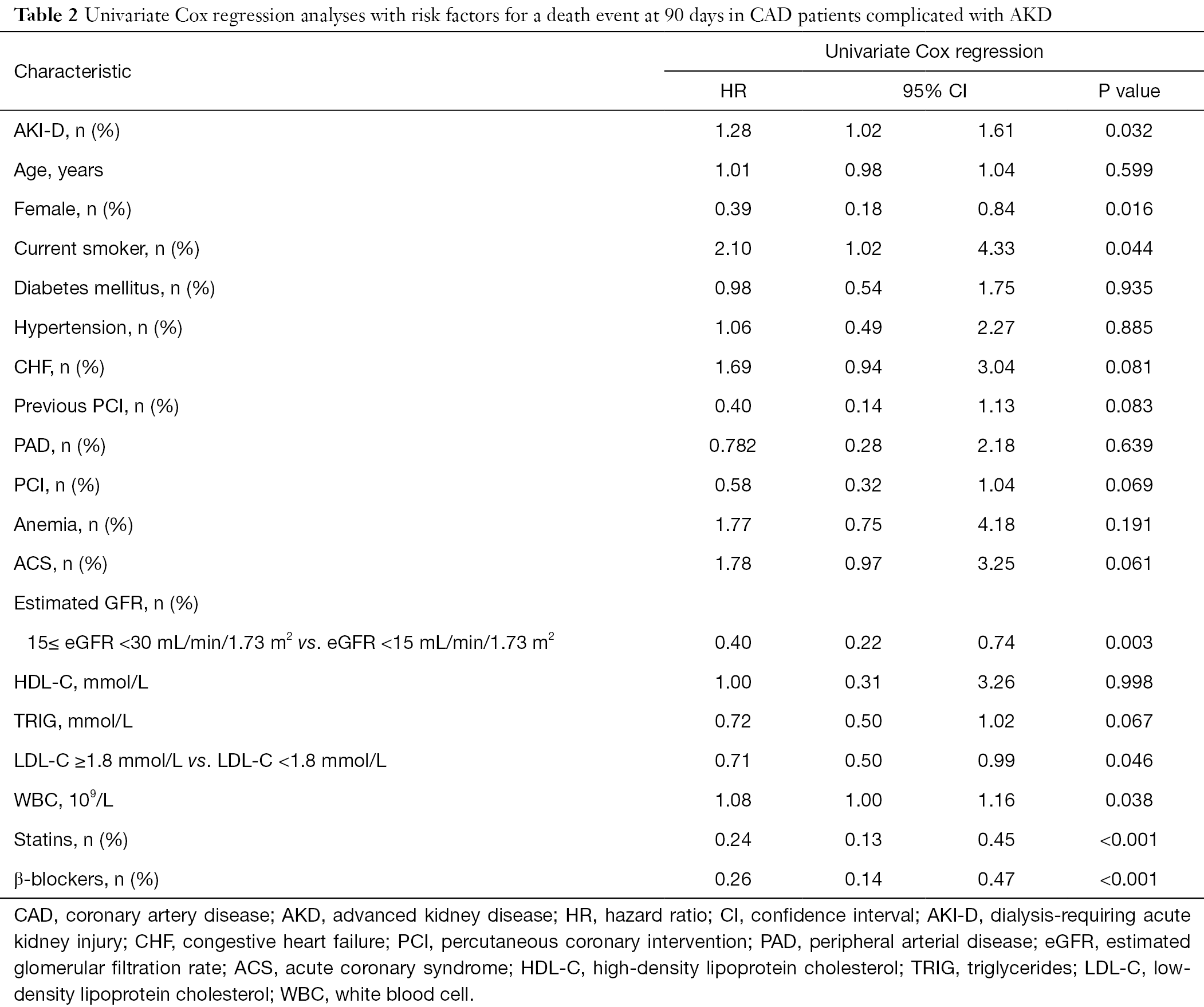 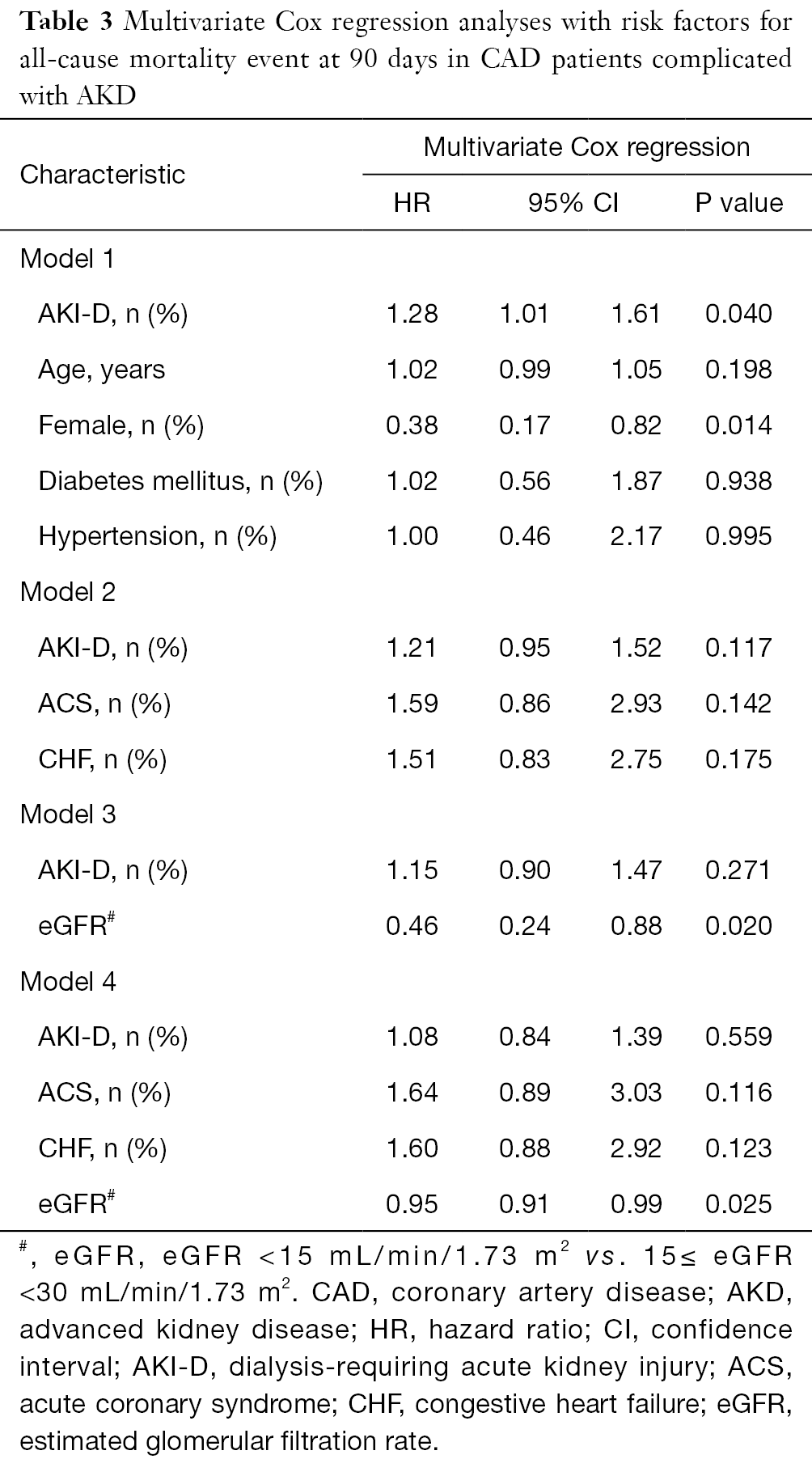 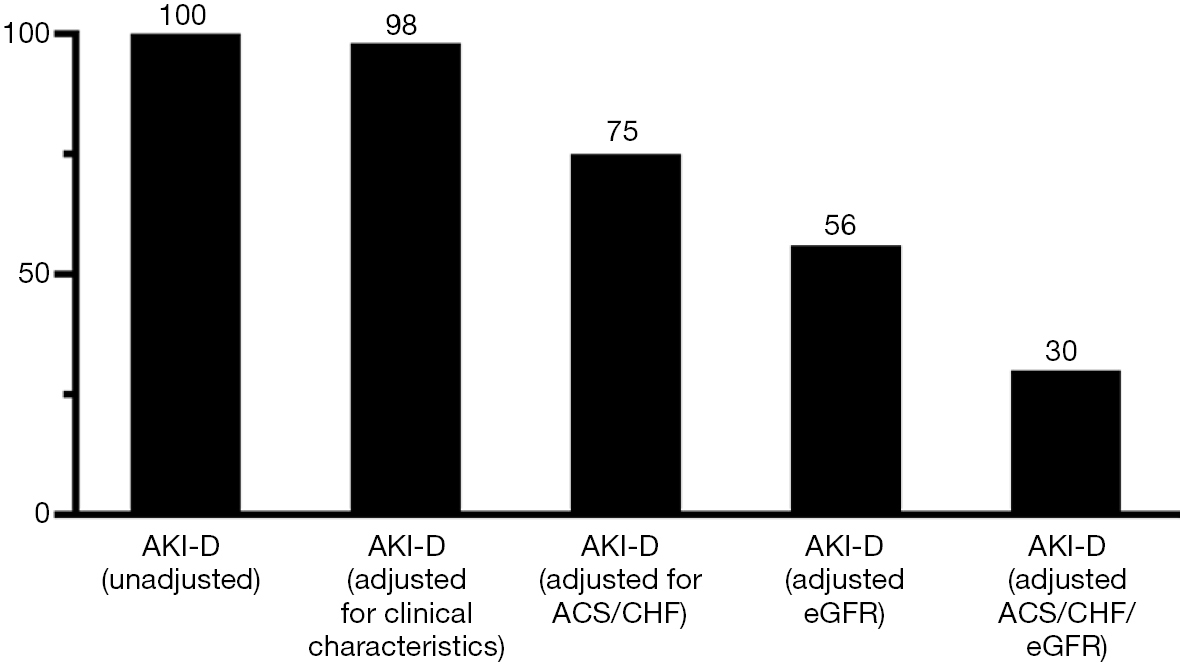 To our knowledge, this study is the first to evaluate the association between AKI-D and 90-day mortality in patients with CAD complicated by AKD. The key finding of the current study is that patients who received AKI-D had a higher risk of mortality at 90 days. This association was mainly attributable to cardio-renal impairment. Indeed, after adjustment for cardiac and renal function, AKI-D was no longer an independent predictor of 90-day mortality among patients with CAD complicated by AKD.

For the incidence of AKI-D, Tsai et al.’s study investigated approximately 1 million consecutive patients who underwent PCI (between June, 2009 and June, 2011) at 1,253 sites in the USA. They estimated that the rate of AKI-D for all CAG patients was 0.3%. Moreover, Brown et al. (8) reported that AKI-D affected 0.25% of the 3 million cardiac catheterization or PCI patients in the United States from 2001 to 2011. Our study included 603 very high-risk patients with AKD who underwent CAG or PCI between 2008 and 2018, meaning the majority of patients included in this study were treated according to the latest clinical guidelines. In our study, the incidence of AKI-D in AKD patients who underwent CAG was 13.8%. The reason why the incidence in our study was much higher than those of other studies is that we included the very high risk patients with comorbidity of both CAD and AKD. Therefore, due to the high incidence of AKI-D among AKD patients, the prognosis of AKD patients who receive AKI-D after CAG would be worthy of further investigation.

The mortality rate is considerably greater in patients with CAD who present with AKI-D than in those without AKI-D, despite improvements to therapeutic strategies (8,9). In the intervention era, Brown et al. and Tsai et al. reported in-hospital mortality rates for AKI-D of 20% and 34%, respectively. However, the 90-day mortality rate for patients in our study was 13.3%, which is slightly lower than those in the studies of Brown and Tsai. The main reasons for these differences are as follows. First, the dialysis rate in the AKD patients in our study (13.8%) was much higher than that in Tsai’s study (4.20%), which may be explained by their study having more stringent indications for dialysis. Essentially, the AKI-D patients included in Tsai’s study may have been at a higher risk than our patients. Second, the clinical data collected by Brown et al. and Tsai et al. were both before 2011, while our study was conducted between 2008 and 2018, during which time, the treatment for critically ill patients has been greatly improved. Moreover, Weisbord et al. (1) found that CI-AKI was associated with a 4-fold increase in relative risk for 90-day death, need for dialysis, and persistent kidney impairment in 4,418 participants after adjusting for age, sex, urine albumin-to-creatinine ratio, diabetes, and myocardial infarction. The results of our study indicated that AKI-D was associated with an increased risk for 90-day mortality after adjusting for age, sex, DM and hypertension (HR: 1.275, 95% CI: 1.011–1.607). Weisbord et al. chose composite events as the primary outcomes of their study, which may have led to the risk of CI-AKI being overestimated. In contrast, we chose all-cause mortality as the clinical outcome of our investigation, which is considered to be the most significant outcome for patient prognosis. Furthermore, our study included AKD patients with CAG; these patients are usually considered to be a population at very high risk and with a poor prognosis (22-25).

Our analysis indicated that AKI-D might be associated with a poorer prognosis in patients with CAD complicated by AKD. However, the prognostic power of AKI-D for 90-day mortality lost significance after adjustment for cardiac and renal function. These results were unsurprising. Previous studies have indicated that cardiac function and renal function are among the most significant predictive factors for out-of-hospital mortality (26,27). Moreover, clinicians’ judgements of postoperative dialysis also mainly depend on patients’ cardiac and renal function. Therefore, our results support the well-known opinion that a dialysis requirement is associated with poor prognosis in patients with CAD complicated by AKD. More importantly, we demonstrated that the poorer outcome may largely be explained by cardiac and renal dysfunction.

Our data may provide a better understanding of the prognosis for AKD patients who receive CAG. First, our analysis, which indicated that the incidence of AKI-D among CAD patients complicated with AKD was 13.8%, was conducted from 2008 to 2018, meaning our results are more likely to reflect current dialysis rates under the latest clinical guidelines (16). Second, while the association between AKI-D and the prognosis of AKD patients is unclear, our study found that the risk of 90-day mortality in AKD patients with AKI-D was 1.28 times higher than that in AKD patients without AKI-D, which may fill this gap and contribute to raising awareness of the need to preserve kidney function in such high-risk patients. Attention should be given to discharge management, as well as to in-hospital prevention or treatment, such as intravascular volume expansion, prophylactic haemofiltration and so on. Third, our analysis indicated that the increased 90-day mortality of patients undergoing AKI-D is mainly due to cardio-renal impairment, which suggests that cardio- and renal-protective effects should be the focus of future studies on CAD patients complicated with AKD.

Our study has several limitations. First, the study was a single-center, retrospective study, which may lead to the occurrence of selective bias, limiting the usefulness of these results. In order to avoid the bias, all eligible consecutive patients within the designated timeframe were included and all measurements were taken while blinded to the patient outcome. Second, only CAD patients complicated with advanced CKD, a relatively undiversified population, were included. However, this also means that our research is more targeted, and the prognosis of these patients has not been studied before. Finally, although our multivariable models were adjusted for some prognostic predictors, there is a possibility that the results were affected by unmeasured confounders, such as occurrence of tumor, medication compliance and the intensity of physical exercise.

In conclusion, the incidence of AKI-D is high in patients with CAD complicated by AKD. In our study, AKI-D was significantly associated with an increased relative risk of 90-day mortality, which was mainly associated with cardio-renal impairment. Clinicians should afford more attention to discharge management in these high-risk patients.

Reporting Checklist: The authors have completed the STROBE reporting checklist. Available at http://dx.doi.org/10.21037/atm-20-6365

Conflicts of Interest: All authors have completed the ICMJE uniform disclosure form (available at http://dx.doi.org/10.21037/atm-20-6365). The authors have no conflicts of interest to declare.

Ethical Statement: The authors are accountable for all aspects of the work in ensuring that questions related to the accuracy or integrity of any part of the work are appropriately investigated and resolved. The study protocol was approved by Guangdong Provincial People’s Hospital (No. GDREC2019555H), and the study was performed in accordance with the Declaration of Helsinki (as revised in 2013). Individual consent for this retrospective analysis was waived.