Evaluation of factors affecting the visualization of dye after transbronchial dye injection: an animal experiment

Since peripheral lung lesions located more than 1 cm deep within the visceral pleura can be frequently visualized on computed tomography (CT), various methods of localization for thoracoscopic surgery have been developed, such as transthoracic needle localization or dye injection through bronchoscopy (1-7). With the methods that use transthoracic percutaneous localization, the occurrence of post-procedural complications, such as pneumothorax or bleeding, is possible (1,3,6). In the case of transbronchial dye injection (TDI) via bronchoscopy, the aforementioned complications do not occur based on several articles (7,8); however, there can be difficulties with dye visualization through the thoracoscope depending on early disappearance of the dye due to diffusion before field exposure (1,8-10).

Herein, we performed an animal experiment to determine how much dye is needed for visualization of peripheral lung lesions, how long the dye lasts, when the dye disappears, and whether air injection following dye injection is necessary. We present the following study in accordance with the ARRIVE reporting checklist (available at http://dx.doi.org/10.21037/atm-20-1695).

Twelve live female farm pigs were used to identify the appropriate amount of indigo carmine needed for localization of peripheral lung lesions using a bronchoscope. The mean age of the pigs was 11.2±1.2 (range, 10–13) weeks, and weight was 39.3±1 (range, 38.4–41.1) kg. Experiments were performed under a project license (No. PNUYH-2018-059) granted by the Institutional Animal Care and Use Committee of Pusan National University Yangsan Hospital in compliance with Pusan national university guidelines for the care and use of animals.

All procedures were performed with the pigs under general anesthesia using an intravenous injection of propofol (4–12 mg/kg/h) and intramuscular injection of tiletamine and zolazepam (4.4–6.6 mg/kg), and meloxicam (0.4 mg/kg). Orotracheal intubation was performed initially, followed by tracheostomy. Under supine position, the predicted place for the thoracoscopic port was generally incised at the sixth mid-axillary line and seventh posterior axillary line of the intercostal space before bronchoscopic dye administration, and dissected before reaching the parietal pleura, which was cautiously not punctured to prevent pneumothorax.

Before bronchoscopy, a guide sheath (K-201; Olympus, Tokyo, Japan) and biopsy forceps were prepared so the surgeon could approach the peripheral region of the porcine lung. The bronchoscope (BF-260; Olympus, Tokyo, Japan) was advanced as far as possible under direct vision to superior segment of right lower lobe; thereafter, guide sheath-covered biopsy forceps were introduced through the working channel of the bronchoscope under fluoroscopic guidance. When the guide sheath-covered biopsy forceps reached within 1cm from visceral pleura under fluoroscopic guidance, the biopsy forceps were removed, while the guide sheath was kept in place for subsequent administration of indigo carmine (Daiichi-Sankyo Inc., Tokyo, Japan). To maintain one-lung ventilation during thoracoscopic inspection, the endotracheal tube was inserted into the tracheostomy orifice and placed in the left main bronchus under bronchoscopic guidance (BF-P160; Olympus). Just after TDI, the pigs were placed in lateral decubitus position and followed by inserting two ports. The thoracoscope was advanced to examine the dyed area of the visceral pleura.

Definitions of the measured times

The t-test and one-way analysis of variance were used to compare data between the study groups for statistical significance. The data are expressed as the mean ± standard deviation (range). A P value <0.05 was considered as statistically significant. All data analyses were conducted using SPSS Statistics software, version 24.0 (IBM, Corp., Armonk, NY, USA). 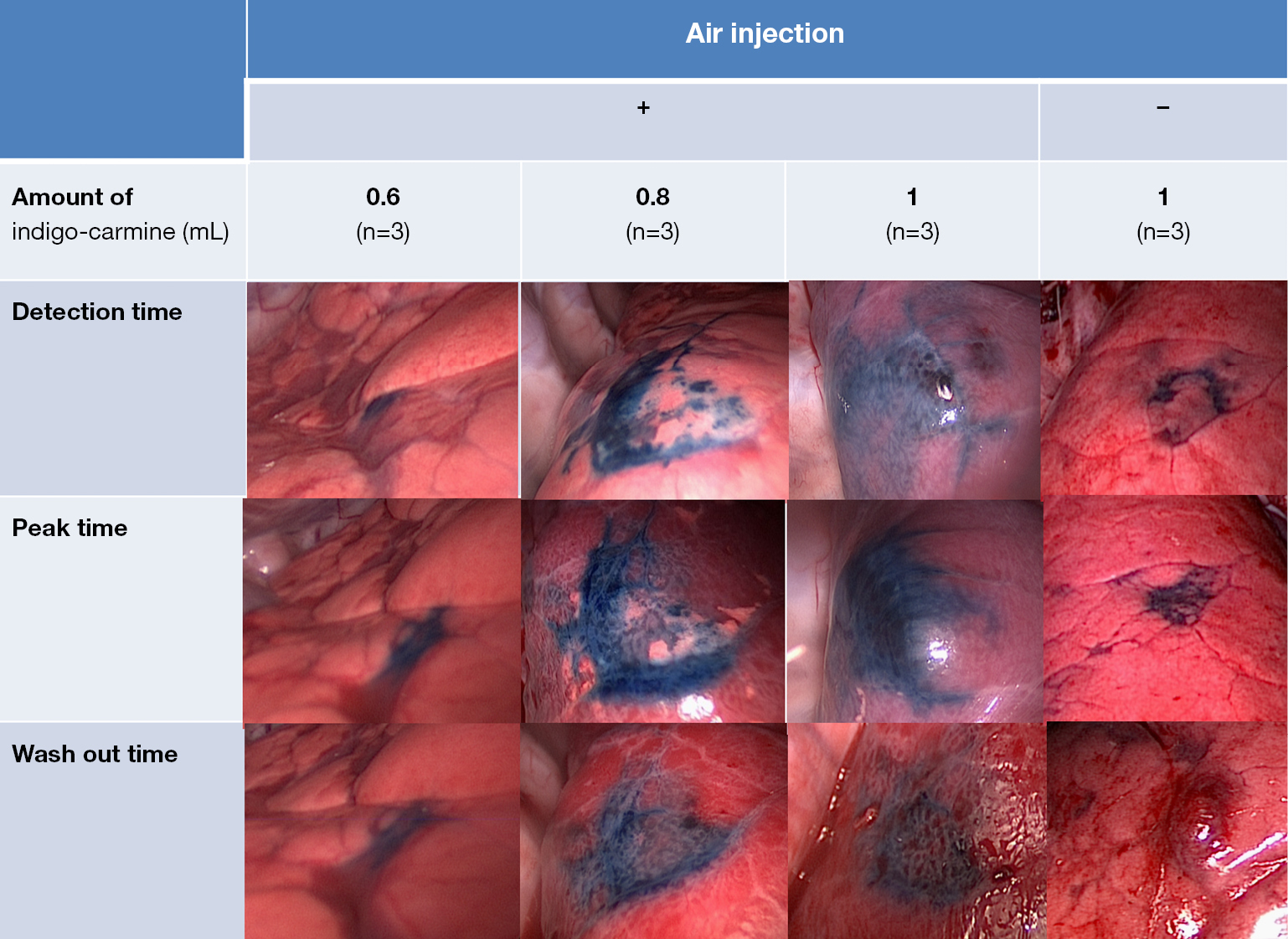 Figure 1 Thoracoscopic images showing changes in the dye extent over time depending on the amount of dye injected and the use of air injection.

Table 2 Detection time, peak time, and wash-out time depending on use of air injection
Full table

Measured sizes of the dye extent at the detection time, peak time, and wash-out time

Table 3 Measured sizes of the dye extent at the detection time, peak time, and wash-out time depending on the amount of dye injected
Full table

Table 4 Measured size of the dye extent at the detection time, peak time, and wash-out time depending on the use of air injection
Full table

Indeterminate pulmonary nodules have been frequently detected since chest CT has been developed. In cases with an increasing number of nodules, therapeutic or diagnostic resection needs to be considered. Although CT-assisted percutaneous marking using lipiodol or wire might be most commonly used for non-palpable nodules located more than 1 cm deep within the visceral pleura, pneumothorax could occur in about 15% of cases, and lipiodol could be spilled into pleural cavity, which might cause pleuritic chest pain and the wire could become dislodged (3,6,10-14). With lipiodol marking, exposure of radiation cannot be avoidable for the patient and operating team (12-14).

TDI using indigo carmine might be another option to make small nodules identifiable by direct vision (1,8-10). Clinically, TDI has been frequently performed in these days, which let the risk of complications decreased, such as pneumothorax, hemothorax, and pleuritic chest pain. However, the dye can be easily and rapidly diffused (8-10), making it potentially difficult to identify the nodule as the interval time between TDI and exploration under video-assisted thoracoscopic surgery becomes longer. Especially if a patient has severe adhesion, the injected dye could become diffused and spontaneously resolve during dissection of the adhesion, and multiple areas of hemorrhage or anthracosis mimicking the color of the dye could cause confusion (8,9).

In our series, there were no significant differences in the detection time, peak time, and wash-out time among groups with 0.6, 0.8, and 1.0 mL of dye injected. However, in the group without air injection, the detection time was significantly delayed, and the interval time to the peak time and wash-out time was significantly shorter than that in the group with air injection. This finding might explain why remnant dye could be left in the catheter even if the same amount of dye was injected. Since air injection after dye injection enabled the dye to be completely sprayed through the catheter, indigo carmine could be easily identified on the peripheral lung parenchyma. As shown in the results, the marking could be identified clearly at about 2 hours after TDI regardless of the amount of indigo carmine injected. Without air injection, the marking might only last for 1 hour.

In our study, the higher the amount of dye injected, the larger the dye extent was visualized, and the dye could be more easily detected in the group with air injection than in the group without air injection group. To compare the difference in size of dye extent among each group, group 2 has significant difference comparing with group 1 (P<0.05) (Figure 2). Thus, in cases in which (I) 2 hours has passed after injection of (II) less than 0.8 mL of dye or (III) no air injection, visualization of dye might fail during thoracoscopic surgery.

Still, this study has some limitations. First, it is a small-sized experiment, which does not have strong statistical power. Second, it is performed by one of experts in bronchoscopic intervention, which means it cannot guarantee same result in case by the other specialist. Third, although the pigs are relatively suited to human based on similarities in their respiratory system, it could be mistranslated to human biology.

TDI might be reliable and efficient for detecting small peripheral lung nodules in cases with more than 0.8 mL of dye injected followed by air injection within 2 hours after dye injection. However, in cases with severe adhesion and anthracotic pigmentation, it makes longer predicted time to lesion exposure or confusing the lesion, and also for emphysema, it could be diffused easily which don’t let the injected area be localized. Therefore, it might be necessary to discover the mixture of dye which will last longer for visualization of lung nodules and distinct from anthracotic pigmentation.

This article was presented as poster in “2019 Chest congress”.

Funding: This work was supported by the National Research Foundation of Korea (NRF) grant funded by the Korea government (MSIT) (No. 2020R1C1C1005004).

Reporting Checklist: The authors present the study in accordance with the ARRIVE reporting checklist. Available at http://dx.doi.org/10.21037/atm-20-1695

Conflicts of Interest: All authors have completed the ICMJE uniform disclosure form (available at http://dx.doi.org/10.21037/atm-20-1695). The authors have no conflicts of interest to declare.

Ethical Statement: The authors are accountable for all aspects of the work in ensuring that questions related to the accuracy or integrity of any part of the work are appropriately investigated and resolved. Experiments were performed under a project license (No. PNUYH-2018-059) granted by the Institutional Animal Care and Use Committee of Pusan National University Yangsan Hospital in compliance with Pusan national university guidelines for the care and use of animals.