Renal tubules and interstitium are the major components of kidney and susceptible to a variety of injures including hypoxia, proteinuria, systemic disorders, and nephrotoxic drugs. The glomerulus has long been thought the culprit for the progression of chronic kidney disease (CKD), while the renal tubules and interstitium are the victim of injury (1). In recent years, increasing evidence has demonstrated that renal function decline correlates better with tubulointerstitial lesions (TILs) than glomerular injury (2-4). It has been reported that tubular atrophy and fibrosis are better predictors of CKD progression than glomerular pathologic lesions. In patients with focal segmental glomerulosclerosis, the best clinical marker for disease progression is tubulointerstitial inflammation (5,6). Similarly, in patients with immunoglobulin A (IgA) nephropathy, only tubulointerstitial injury was associated with the rate of estimated glomerular filtration rate (eGFR) loss over a follow-up period extending to 35 years (7). Crosstalk between tubulointerstitium and glomerulus may play a pivotal role in the prognosis of patients with primary glomerular lesions (8).

Most epidemiologic studies on renal biopsy have focused on the spectrum of glomerular diseases (9,10). While a few studies focused on isolated tubulointerstitial disease such as acute or chronic tubulointerstitial nephritis (11-14), large and high-quality studies on the profiles of biopsy-proven TILs in patients with glomerular diseases are rather scarce.

In this study, we analyzed the profile of TILs in a renal biopsy series including 62,569 patients from 1,211 hospitals across China and evaluated their correlation with clinical indications and concurrent glomerular diseases. We present the following article in accordance with the STROBE reporting checklist (available at http://dx.doi.org/10.21037/atm-20-1669).

We enrolled a total of 62,569 native renal biopsies from 1,211 hospitals across China from 2015 to 2017. All renal histologic specimens were processed and diagnosed at the Kingmed Pathology Center. The specimens were regularly stained with hematoxylin-eosin, periodic acid-Schiff, periodic acid-silver Metheramine and Masson, and tested for IgA, IgG, IgM, C3, C4, C1q and k/λ–light chains by immunofluorescence assays. Electron microscopic examination was also performed in 86.7% of the samples. The data collected included patients’ demographic information, clinical syndrome or diagnosis at biopsy, date and hospital performing the biopsy, histologic diagnosis, detailed histological reports from light microscopy, electron microscopy, and immunofluorescence assays. The Medical Ethics Committee of Nanfang Hospital, Southern Medical University approved the study protocol. The study was conducted in accordance with the Declaration of Helsinki (as revised in 2013). The study was approved by The Medical Ethics Committee of Nanfang Hospital, Southern Medical University (No.: NFEC-2015-073) and individual consent for this retrospective analysis was waived.

We categorized the severity of TILs based on the degree of spread out of inflammation, fibrosis, and atrophy. We defined focal or multifocal legion (<25% by area), flaky (25–50%), and diffuse (>50%) lesions as mild, moderate, and severe, respectively, with a corresponding score of 1 to 3. Those without TILs were assigned a score of 0. We defined chronic TILs as the existence of any tubular atrophy or fibrosis.

Calculation of the glomerulosclerosis score

The indications for kidney biopsy were classified into one of the following categories in order (from high to low) based on the clinical diagnosis at biopsy: nephrotic syndrome (NS) with acute kidney injury (AKI), NS, AKI, progressive CKD defined as CKD stage 3-5, proteinuria without NS (PU), and isolated hematuria (HU). For cases that met the definitions of multiple categories, they were assigned to the class with the highest order.

We excluded the biopsy cases that had less than five glomeruli under light microscope, without histological diagnosis or glomerular disease, and the repeated biopsy cases. We summarized continuous variables by means ± standard deviation (SD) or median (interquartile range) and categorical variables by count (percentage). We calculated the Spearman’s correlation coefficient between the severity of TILs and the glomerulosclerosis score in the total samples as well as stratified by major glomerulopathies. We examined the association between the intrarenal arteriolar lesions and the severity of TILs in children and adults, respectively, using a logistic regression model with adjustment for age, sex, hospital categories, geologic region, biopsy indication and concurrent glomerular diseases. A natural spline term was used for the adjustment of age in the regression model.

We selected from biopsy series a total of 58,232 independent cases that had 5 or more glomeruli under the microscope with definite pathological diagnosis, including 340 with a combination of two different glomerulopathies, 56,880 with a single glomerulopathy, and 1,012 with isolated tubulointerstitial diseases. The profile of isolated tubulointerstitial diseases was listed in Table S1. We subsequently analyzed TILs in the cases that had a single biopsy-proven glomerular disease (Figure 1). Because the profiles of glomerulopathy differed significantly between children and adults, we analyzed TILs in children and adults separately. 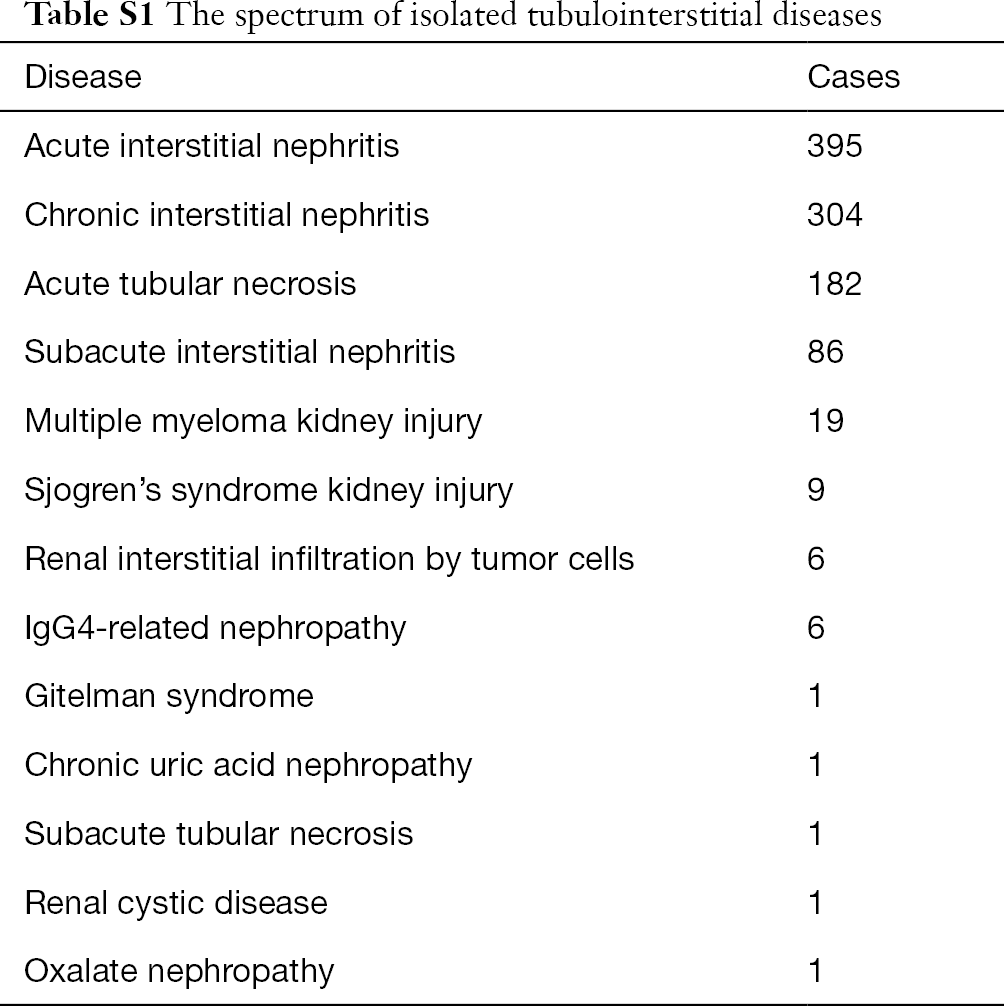 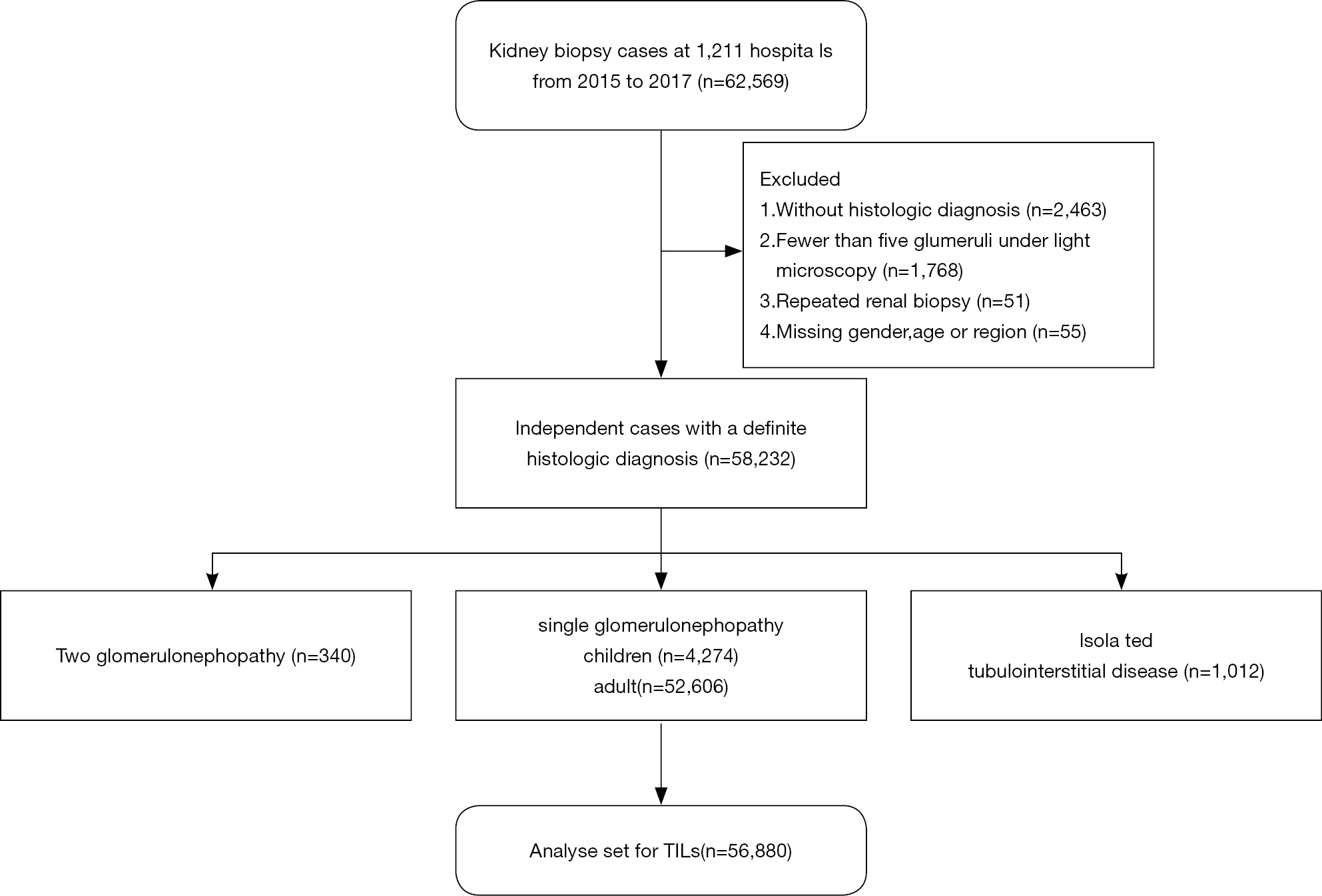 The demographic and clinical characteristics of the biopsy cases analyzed, including 4,274 children and 52,606 adults, are presented in Table 1. The study population was relatively young with an average age of 42 years and split equally in gender. Nearly 80% of the biopsy were performed in the tertiary class A hospitals in China. NS and proteinuria were the most common indications for renal biopsy in both children and adults. The profiles of glomerulopathy differed significantly between children and adults. The most common glomerular diseases in children were minimal change disease, Henoch-Schonlein purpura nephritis and IgA nephropathy, compared to membranous nephropathy, IgA nephropathy, and minimal change disease in adults. 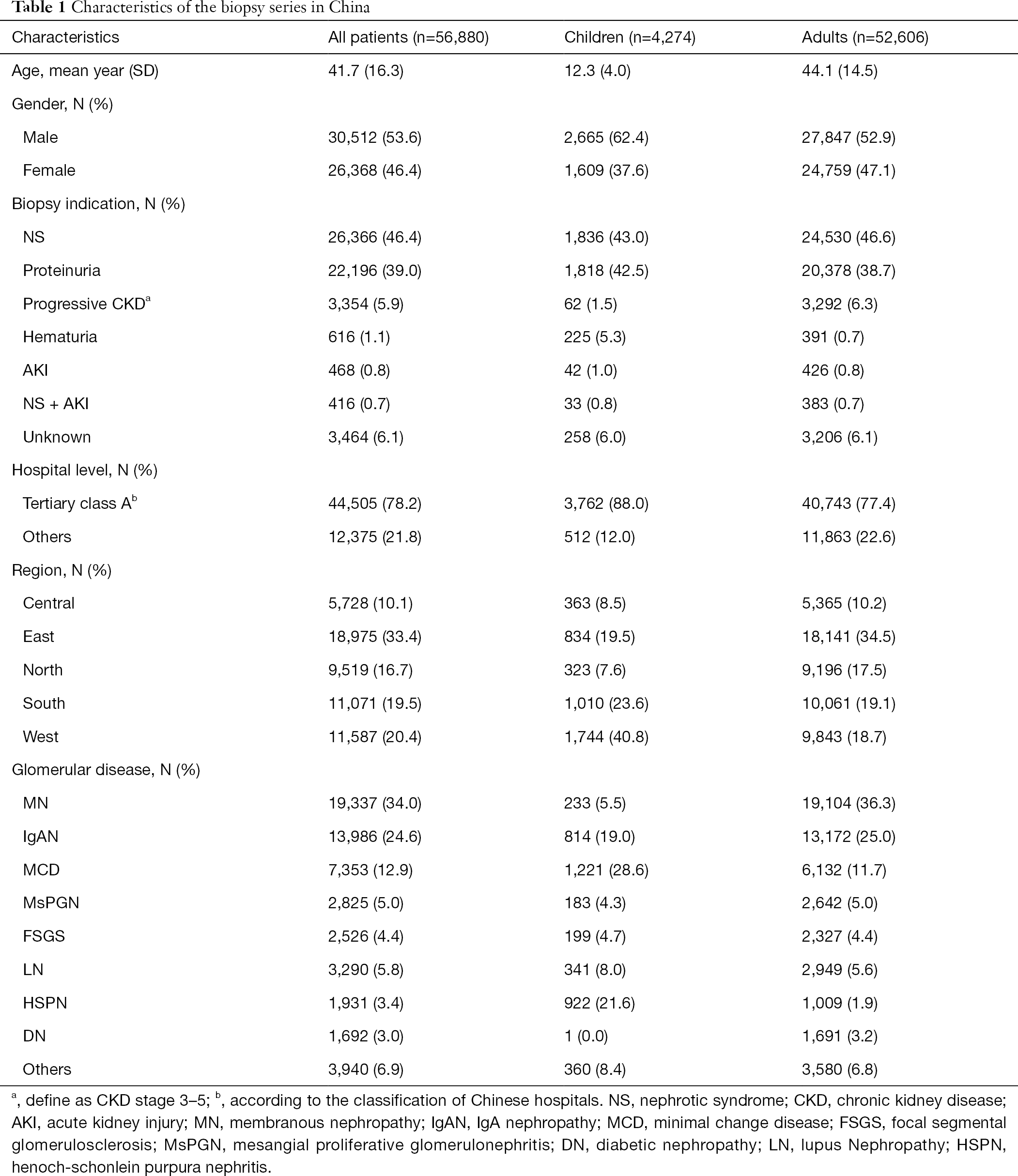 Table 1 Characteristics of the biopsy series in China
Full table

Profiles of TILs in patients with glomerular disease

In our study population, TILs were present in 45.9% and 82.2% of the biopsy cases in children and adults, respectively (Table 2). The three most common TILs in children were interstitial inflammatory infiltration, shedding of tubular epithelium, and tubular atrophy, respectively. In adults, interstitial inflammatory infiltration, tubular atrophy and interstitial fibrosis were the most prevalent. Most of TILs were chronic lesions, and accompanied by intrarenal arteriolar lesions that were present in13.3% of children and 66% of adults. The prevalence of chronic TILs and intrarenal arteriole lesions varied with biopsy indication and type of glomerulopathy (Figure 2). These lesions were much more common in adults than in children across the whole spectrum of biopsy indications and glomerulopathies, except for diabetic nephropathy, in which almost all cases (>98%) have chronic TILs and intrarenal arteriole. Detailed profiles of TILs stratified by type of glomerulopathy were summarized in Table S2. Patients with AKI or progressive CKD were more likely to have chronic TILs as well as intrarenal arteriolar lesions in both children and adults. 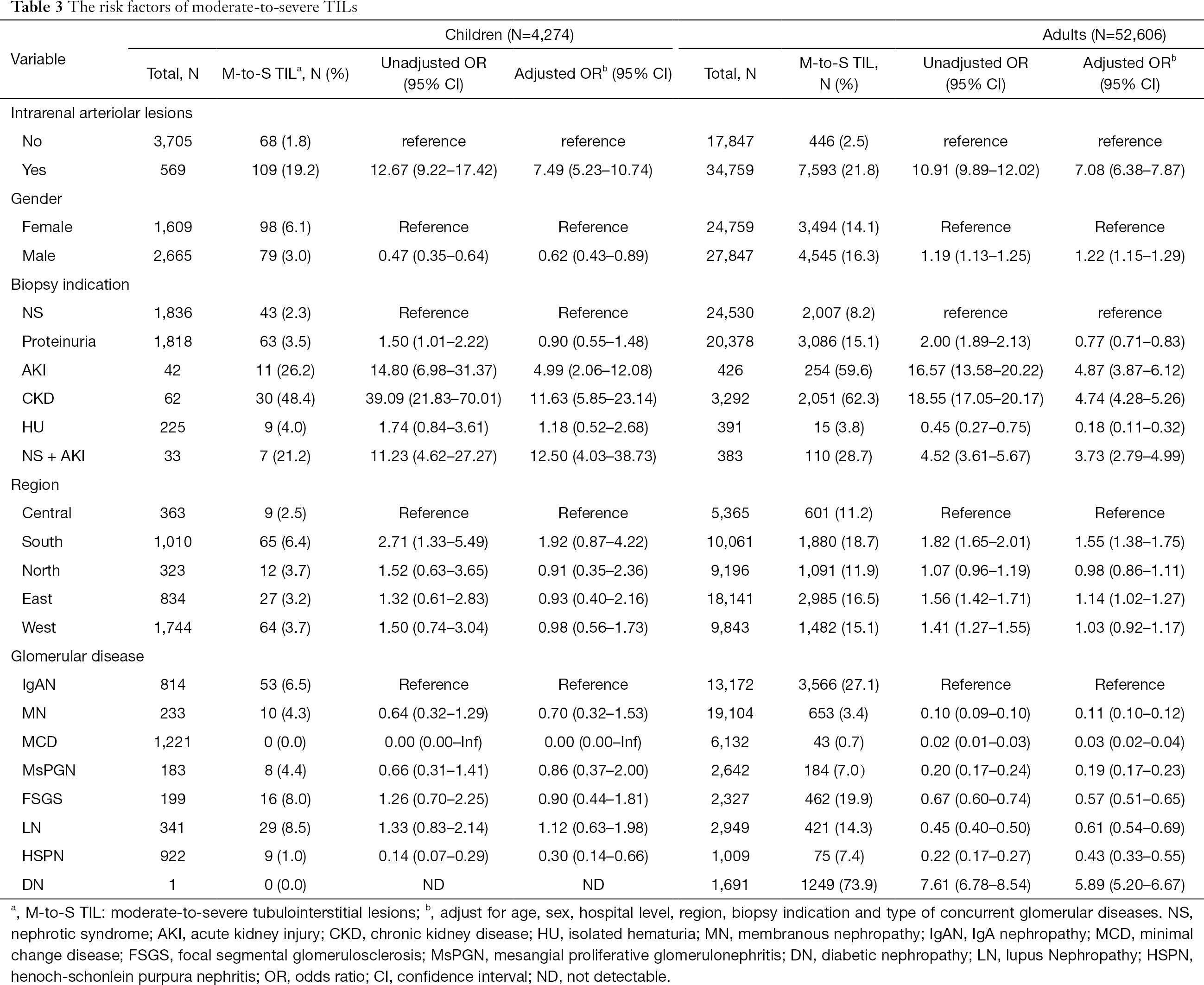 Chronic TILs were present in 20.6% of children and 66% of adults, most frequently found in patients with IgA nephropathy (82.3%) and diabetic nephropathy (98.3%). In both adult and children, intrarenal arteriolar lesions, AKI, and progressive CKD were associated with a significantly increased risk of chronic TILs after adjusting for other covariates (Table 4). 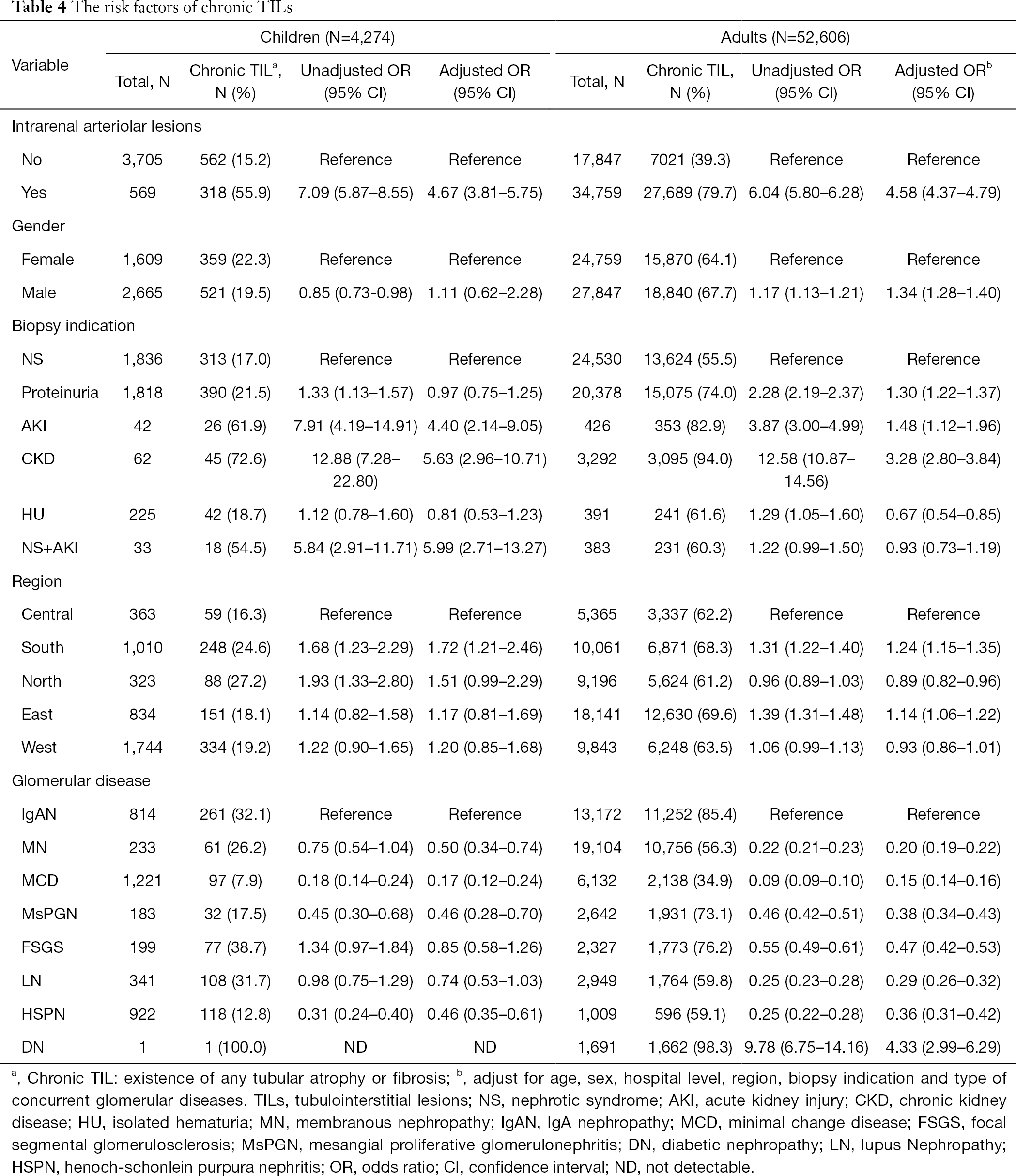 To the best of our knowledge, this is the first nationwide study to describe the profiles of biopsy-proven TILs among patients with glomerular disease. Although the biopsy samples in our study came from 1,211 hospitals across China, all the samples were processed and diagnosed histologically at a single pathological laboratory using unified criteria, which minimized the heterogeneity in histological diagnosis. In our study, TILs were more common in adults than in children. Patients with intrarenal arteriolar lesions, glomerulosclerosis, AKI, progressive CKD, or diabetic nephropathy had a significantly increased risk of moderate-to-severe and chronic TILs.

In our study, male was associated with a slightly increased risk of moderate-to-severe TILs in adults and a decreased risk in children after adjusting for other covariates. The exact mechanisms for these associations are not clear, and it may be caused by unadjusted confounders. For example, adult males are more likely to have hypertension and diabetes and to be exposed to nephrotoxic drugs (17). Such information was not available and hence not included in our association analyses.

The intrarenal arteriolar lesion and glomerulosclerosis are significant contributors of TILs in our study. A previous study reported that the proportions of tubular atrophy, interstitial cell infiltration, and interstitial fibrosis were significantly higher in patients with intrarenal arteriolar lesions than that in the patients without arteriolar lesions (18). Since the peritubular capillaries represent the sole blood supply to the tubules, glomerular scarring that damages the upstream capillary bed could have downstream consequences. Bohle et al. (19) found a significant inverse relationship between post-glomerular capillary area and serum creatinine. Obliteration of the peritubular capillary network could lead to reduce blood flow, which results in tubule hypoxia and tubular epithelial cell death and tubular atrophy (20-22). Meanwhile, tubulointerstitial and vessel damage increases the vascular resistance, which leads to drop in the glomerular filtration rate and eventually enters a vicious circle (23). Consistent with previous reports (24-26), the grade of glomerulosclerosis was significantly associated with the severity of TILs in our study, especially in patients with IgA nephropathy.

It is noteworthy that patients from southern China, mostly Guangdong province, had a 57% higher risk of moderate-to-severe TILs than that from other regions. According to the National Adverse Drug Reaction (ADR) Monitoring System in China, 33.7% of ADR in Guangdong province were potentially caused by inappropriate medication (29), which was the highest among all provinces. In Guangdong, use of Chinese herbal medicine is very common, and the incidence of new or serious ADRs of traditional Chinese herbal injections is significantly higher than the national average (30). We speculate that higher exposure to potentially nephrotoxic drugs may partly contribute to the observed increased risk of moderate-to-severe TIL in patients from southern China (31).

Our study has several limitations. First, we do not have detailed clinical data of the patients such as laboratory indices, comorbidities and medications which may confound our association analyses of moderate-to-severe TILs. However, biopsy indications such as NS, proteinuria and hematuria may serve as a semi-quantitative surrogate for the severity of disease. Second, because our study is cross-sectional we are not able to evaluate the prognosis of TILs. Third, like any association studies, we are not able to make causal inference between TILs and the risk factors. Fourth, the present study only included Chinese population. Whether these results are generalizable to other ethnic population is unknown.

Reporting Checklist: The authors have completed the STROBE reporting checklist. Available at http://dx.doi.org/10.21037/atm-20-1669

Conflicts of Interest: All authors have completed the ICMJE uniform disclosure form (available at http://dx.doi.org/10.21037/atm-20-1669). The authors have no conflicts of interest to declare.

Ethical Statement: The authors are accountable for all aspects of the work in ensuring that questions related to the accuracy or integrity of any part of the work are appropriately investigated and resolved. The study was conducted in accordance with the Declaration of Helsinki (as revised in 2013). The study was approved by The Medical Ethics Committee of Nanfang Hospital, Southern Medical University (No.: NFEC-2015-073) and individual consent for this retrospective analysis was waived.