Xanthogranulomatous cholecystitis (XGC) is a rare disorder of the gallbladder characterized by a focal or diffuse destructive inflammatory process followed by marked proliferative fibrosis along with infiltration of macrophages and foamy cells (1), which was first described as XGC by McCoy in 1976 (2,3). Patients with XGC present typical features of acute or chronic cholecystitis, and the imageology and intraoperative findings exhibit like those of gallbladder carcinoma (GBCa), leading to its frequent misdiagnosis (4), and making it difficult for surgical treatment. Moreover, this misdiagnosis also can lead to a potential misjudgment of how to excise the lesion, and if radical surgical excision is performed, it may also expand the scope of surgery and increase postoperative complications (5).

We retrospectively analyzed clinical symptoms, demographics, imageology, operation records, histopathological findings and postoperative complications of 100 patients with a pathological diagnosis of XGC who were treated in our hospital from January 2009 to December 2018, with the aim of making potentially aid in an accurate diagnosis of XGC and contributing to its optimal treatment.

We present the following article in accordance with the STROBE reporting checklist (available at http://dx.doi.org/10.21037/atm-20-5836).

An analysis from a retrospective collected database of patients operated upon in our hospital with a diagnosis of XGC between January 1, 2009, to December 31, 2018, was done. By consulting the surgical scheduling system, 50,005 case records revealed 100 patients with a histopathological diagnosis of XGC. Their gallbladder specimens were re-evaluated by an independent pathologist. Their clinical symptoms, demographics, imageology, operation records, histopathological findings, and postoperative complications were collected and analyzed. For each individual, the intra-operative findings, including infiltrating into adjacent tissues, thickened gallbladder wall (thickness of 3 mm or more), cholecystolithiasis, choledocholithiasis, forming a fistula with the adjacent viscera, enlarged regional lymph nodes, and adjacent hepatic abscesses were observed and recorded.

The study was conducted in accordance with the Declaration of Helsinki (as revised in 2013). The retrospective study was approved by the Ethics Committee of West China Hospital of Sichuan University and waived the need for informed consent (2019 Year of Approval No. 1107) and has been registered with the Chinese Clinical Trial Registry under the registration number ChiCTR2000031815.

The mean value and standard deviation of the data were obtained by the SPSS v26.0 software package (SPSS, Chicago, IL, USA).

Table 1 The clinical symptoms during the admission
Full table 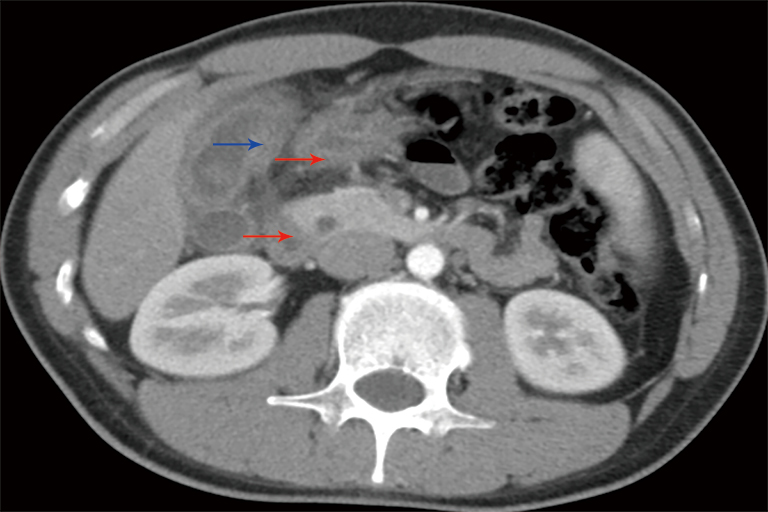 Preoperative examination revealed 93 patients with cholecystolithiasis (Figure 2); 6 patients were diagnosed with hepatic abscesses (Figure 2), while no pathognomonic finding had been described. The imageology results were summarized in Table 2. 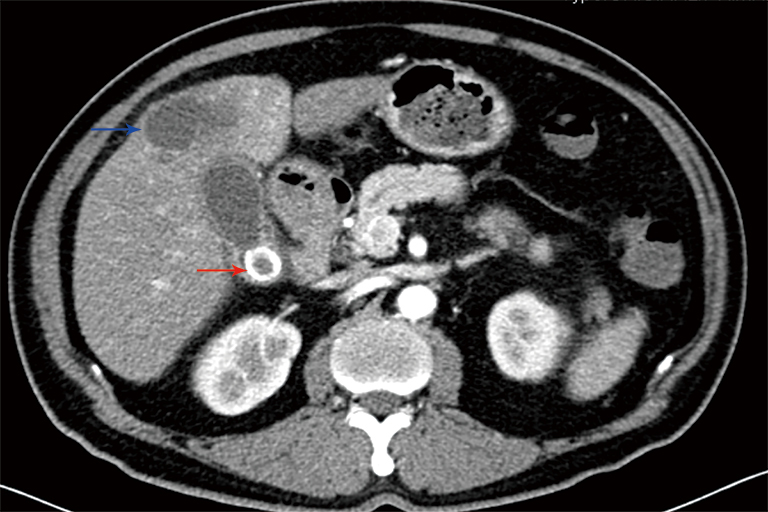 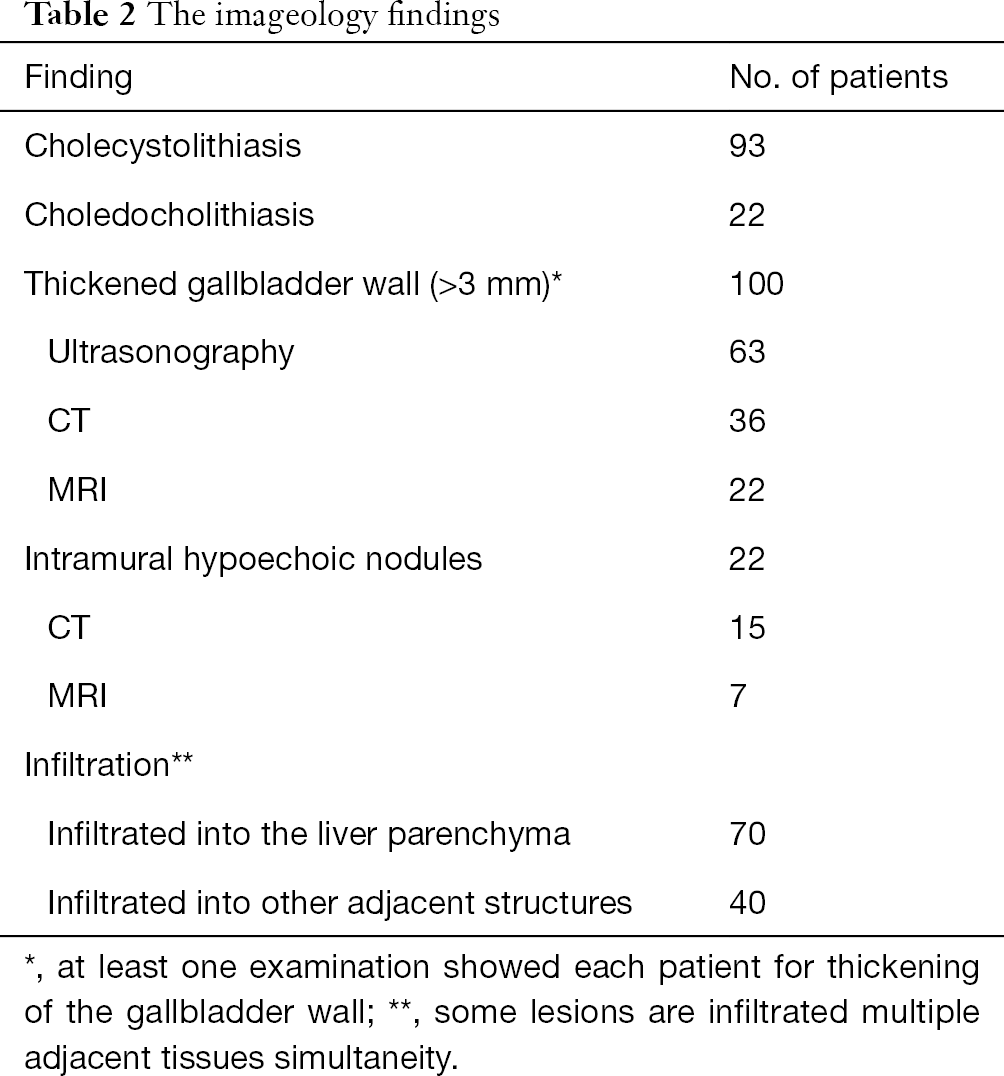 Intraoperative findings confirmed a thickened gallbladder wall in all cases, and xanthogranulomatous infiltrated into adjacent tissues were recorded in 96 patients. Cholecystolithiasis was found in 94 patients, and 32 out of them were combined with choledocholithiasis. Seventy-nine patients showed disordered Calot’s triangle anatomy, while enlarged regional lymph nodes can be found in 36 patients. Twenty patients also formed a fistula with the adjacent viscera. In 7 cases, hepatic abscesses have been recorded.

The intraoperative frozen-section examination was performed in 48 patients with the suspicion of malignancy, but only 2 cases were finally confirmed; thus, the coincidence of GBCa with XGC was 2.0%. The mean operating time was 79.5 minutes (range, 27–305 minutes), and the mean estimated blood loss was 140.2 mL (range, 20–1,800 mL). Other intraoperative findings were shown in Table 3. Added procedures were performed in 61 patients (61%) for several reasons (Table 4). 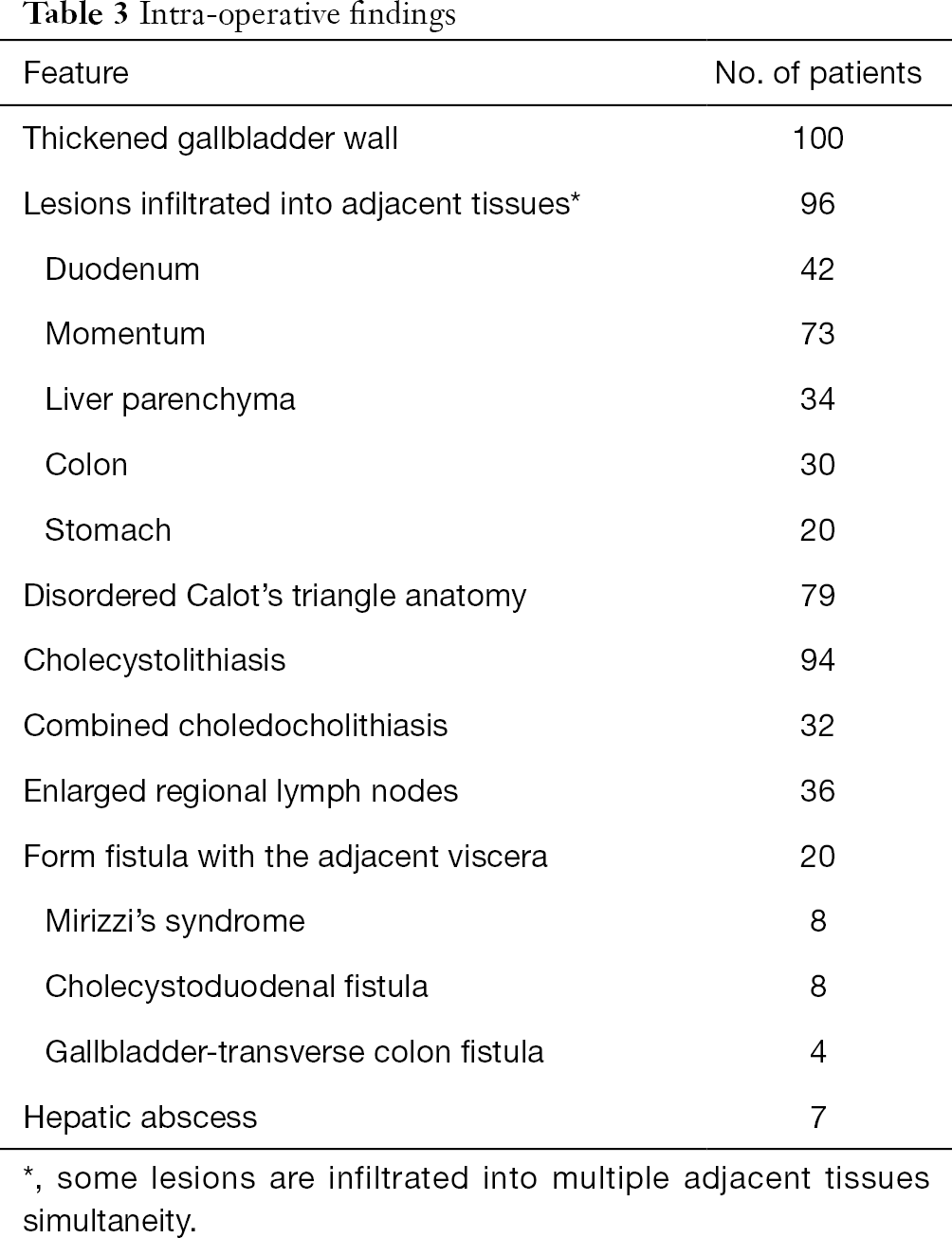 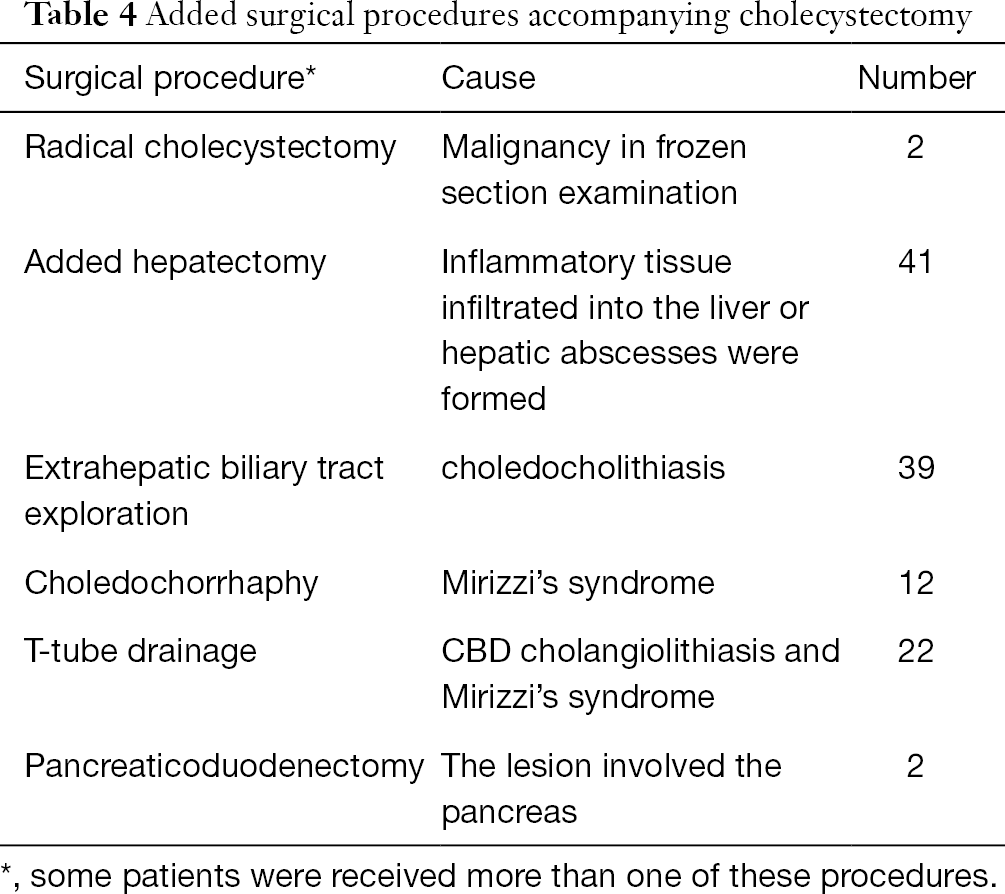 The average hospitalization was 4.3 days (range, 1–22 days). All patients were cured in this group, with only 3 cases of wound infection, 7 cases of abdominal infection, 2 cases of pulmonary infection, 1 case suffering from deep venous thrombosis. There was no mortality in this series (Table 5).

XGC is a rare disease of the gallbladder showing a clinically proliferative and destructive inflammatory process, and the incidence of XGC has been reported as 0.7–13.2% of all gallbladder-related inflammatory conditions (4,6). XGC primarily affects older people, usually in their sixth or seventh decade of life, and suffering men and women equally (7). Histologically, XGC is characterized by chronic inflammatory changes, with bile detected in the gallbladder wall and macrophages engulfing lipids (8). The most widely accepted theory for the etiopathogenesis of XGC is the rupture of the Rokitansky-Aschoff sinuses and extravasation of bile into the gallbladder wall. Extensive inflammatory fibrosis causes thickening of the gallbladder wall and formation of multiple yellowish-brown nodules, often spreading to adjacent organs including liver, omentum, colon, stomach, and duodenum (9,10). When the thickened gallbladder wall presses against the common bile duct (CBD), it can often cause obstructive jaundice (11). An acute attack of cholecystitis within six months indicates XGC. However, XGC is often misdiagnosed as GBCa, leading to unnecessary radical surgical excision.

The incidence of XGC was approximately 0.2% in our study, the average age was 55.6 years, which was like that found in other studies (7,12), highlighting that the onset age of XGC was relatively late. Although no clinical symptoms were specific to XGC (1), patients present typical features of chronic or acute cholecystitis, including chronic or acute RUQ pain, jaundice, anorexia, abdominal distension, hyperpyrexia, nausea and vomiting, and RUQ mass, with RUQ pain being the most commonly reported complaint (13). In our study, RUQ pain was reported in 97 out of 100 patients, hyperpyrexia in 27, anorexia in 25, nausea and vomiting in 15, abdominal distension in 37, jaundice in 32, and 6 patients, RUQ mass can be touched.

Ultrasonography is beneficial for identifying the thickening of the gallbladder wall (focal or diffuse), cholecystolithiasis, and intramural hypoechoic nodules. Lee reported that some features on ultrasonography suggested XGC, including thickening of the gallbladder wall, cholecystolithiasis, and infiltrating into adjacent tissues (14). These findings can also be confirmed on abdominal CT. Typical findings of XGC on CT include diffuse thickening of the gallbladder wall, intramural hypodense nodules, pericholecystic infiltration, and hepatic abscess (10). Intramural hypodense nodules were one of the most specific findings of XGC on CT, and approximately 33% of patients showed this feature (15).

In the present study, the detection rates of focal or diffuse gallbladder wall thickening on ultrasonography, CT, and MRCP were 63%, 92%, and 73%, respectively. Everyone was confirmed by at least one of these examinations above. Meanwhile, intramural hypoechoic nodules were detected in 15 patients by CT (38%) and in 7 patients by MRCP (23%). GBCa was suspected in 33 patients by CT and MRCP, but only 2 cases were confirmed, showing a considerable misdiagnosis rate, which may be because of the low incidence of XGC and insufficient experience of clinicians. Although some reports had showed the coexistence of XGC and GBCa, there was no conclusive evidence to suggest that XGC is a premalignant condition (16). The association of XGC and GBCa can be better explained because both conditions resulted from long-term chronic inflammatory stimulation. Thus, it should not be surprising to find both pathological features in the same specimen. A study conducted by Ghosh attempted to assess the expression of p53, proliferating cell nuclear antigen, and beta-catenin in XGC vis-à-vis GBCa, but it showed no premalignant potential of XGC (17). Only two patients were confirmed to have GBCa by postoperative pathology in our study, showing an incidence of 2%, slightly lower than the morbidity reported in the previous literature (1,18).

As the disease progresses, the lesions expand, and fibrous tissue hyperplasia develops, causing inflammatory granuloma, which leads to thickening of the gallbladder wall and infiltration into adjacent organs (1). Sometimes, Mirizzi’s syndrome or cholecystolithiasis can be found (19). The correlation of XGC to cholecystolithiasis was reported to be 70–100% in the literature (1,8). In our study, the significant intraoperative findings, including thickening of the gallbladder wall (100.0%) and infiltrating into adjacent tissues or organs (96.0%). Also, cholecystolithiasis was found in 94 cases (94%), thirty-two cases of them were even combined with choledocholithiasis. Mirizzi’s syndrome was found in 8 cases (8%), following the incidence rate in most reports (1,7).

Surgical treatment for XGC is challenging, with the only definitive treatment being cholecystectomy, either complete or partial (19,20). Ghosh concluded that complete cholecystectomy was complicated in 65% of patients with XGC, and partial cholecystectomy was performed in 35% of patients because of severe adhesion between the gallbladder and surrounding tissue (17). The recommended surgical treatment is open cholecystectomy because of dense fibrous adhesion, excessive local inflammation, and risk of concomitant malignancy (7,19). The laparoscopic approach is not shown for XGC, and open approaches are often used initially because of suspicion of cancer and/or the anticipation of technical difficulty. After an attempt at LC, the rate of conversion to open was reported from 19% to 80% (1,7). When the diagnosis of XGC was precise intraoperatively, simple cholecystectomy was sufficient therapy (14,21,22). However, contiguous organ involvement may facilitate the need for performing more extensive resection, even when it was known preoperatively that the underlying disease process was entirely benign.

In this study, 52 patients underwent open cholecystectomy, while laparoscopic approaches were planned in 48 patients but were successful only in 40. The rate of conversion to open surgery (16.7%) was higher than the usual standard conversion rate of LC, mainly because of technical difficulties associated with acute inflammation, dense adhesion, and/or uncontrolled bleeding. This was one of the lowest conversion rates compared with the reported conversion rates for XGC in previous literature (23).

Complete cholecystectomy is preferred because of the risk of coexistence with GBCa and residual malignancy; if the inflammation and transmural fibrosis extended into adjacent liver tissues and structures of the hepatic hilum, the gallbladder bed and adjacent structures may be included in the resection specimen (24). However, partial cholecystectomy may be the only possibility when complete resection is impossible since the patient cannot tolerate an extended radical resection. No partial cholecystectomy was performed in this study and added hepatectomy was required in 41 patients because the inflammation had extended into the liver tissues or hepatic abscesses had formed. Meanwhile, two patients even underwent pancreaticoduodenectomy because the lesion involved the pancreas. Simultaneously, T tube drainage was performed in 22 patients because of choledocholithiasis and Mirizzi’s syndrome.

Though it is a benign disease process, XGC may have an aggressive presentation suggestive of GBCa. The greatest therapeutic options may be radical resection following oncological principles performed by experienced surgeons, in order that postoperative complications may be minimized if not avoided altogether.

Accurate preoperative diagnosis was challenging but beneficial to avoid an unnecessarily extended cholecystectomy. The recommended treatment is open cholecystectomy, as conversion from laparoscopic to open surgery is common. Complete cholecystectomy is recommended because of the risk of concomitant malignancy; however, difficulty in dissection and anatomical identification may justify partial cholecystectomy to protect the hilar structures.

Funding: This study was supported by grants from the Key Technology Research and Development Program of Sichuan Province (2018SZ0225).

Reporting Checklist: The authors have completed the STROBE reporting checklist. Available at http://dx.doi.org/10.21037/atm-20-5836

Conflicts of Interest: All authors have completed the ICMJE uniform disclosure form (available at http://dx.doi.org/10.21037/atm-20-5836). The authors have no conflicts of interest to declare.

Ethical Statement: The authors are accountable for all aspects of the work in ensuring that questions related to the accuracy or integrity of any part of the work are appropriately investigated and resolved. The study was conducted in accordance with the Declaration of Helsinki (as revised in 2013). The retrospective study was approved by the Ethics Committee of West China Hospital of Sichuan University and waived the need for informed consent (2019 Year of Approval No. 1107) and has been registered with the Chinese Clinical Trial Registry under the registration number ChiCTR2000031815.