Lung cancer is one of the most common malignant tumors in the world. It is estimated that lung cancer-related deaths account for 23% of the total cancer-related deaths in 2020 (1). Non-small cell lung cancer accounts for 75% to 80% of all lung cancers, including adenocarcinoma and squamous cell carcinoma (2). Surgery is the primary treatment of non-small cell lung cancer. Tumor volume and lymph node metastasis are critical indicators to assess whether patients can undergo surgery and tumor staging (3). Traditional tumor staging is often used to predict the prognosis of lung cancer patients. However, patients with the same tumor stage sometimes have different prognoses due to individual differences (4). Recent studies have found that molecular expression is a key factor influencing lung cancer prognosis. For example, PD-1 expression reflects the response to immunotherapy (5), which suggests the vital value of molecular level studies in lung cancer prognosis.

RNA modification is a way of regulating post-transcriptional levels (6,7). More than 100 types of chemical RNA modifications, which are widely distributed in messenger RNA (mRNA), transfer RNA (tRNA), non-coding small RNA, and long non-coding RNA (lncRNA), have been identified at present (6,8,9). N6-methyladenosine (m6A) methylation is the most common type of RNA modification on mRNA (10). Limited by the low sensitivity of early detection techniques, it was not until 2011 that the biological function of the first m6A methylation regulators on mass and obesity (FTO) was clarified (11). 5-methylcytosine (m5C) and N1-methyladenosine (m1A) are new types of RNA modifications that have attracted full attention in recent years. Bisulfite-based transcriptome sequencing study finds thousands of m5C modification sites on mRNAs in HeLa cells, and research on RIP sequencing technology found that m1A is a novel transcriptome control with evolutionary conservation (12,13). However, the characteristics and functions of m5C and m1A modification in mRNA are not entirely apparent.

In this study, we systematically analyzed the expression of m6A, m5C, and m1A methylation regulators in lung adenocarcinoma, as well as the associations between the clinicopathological characteristics. We constructed different tumor subgroup models and risk models to show the predictive value of RNA methylation for lung adenocarcinoma. 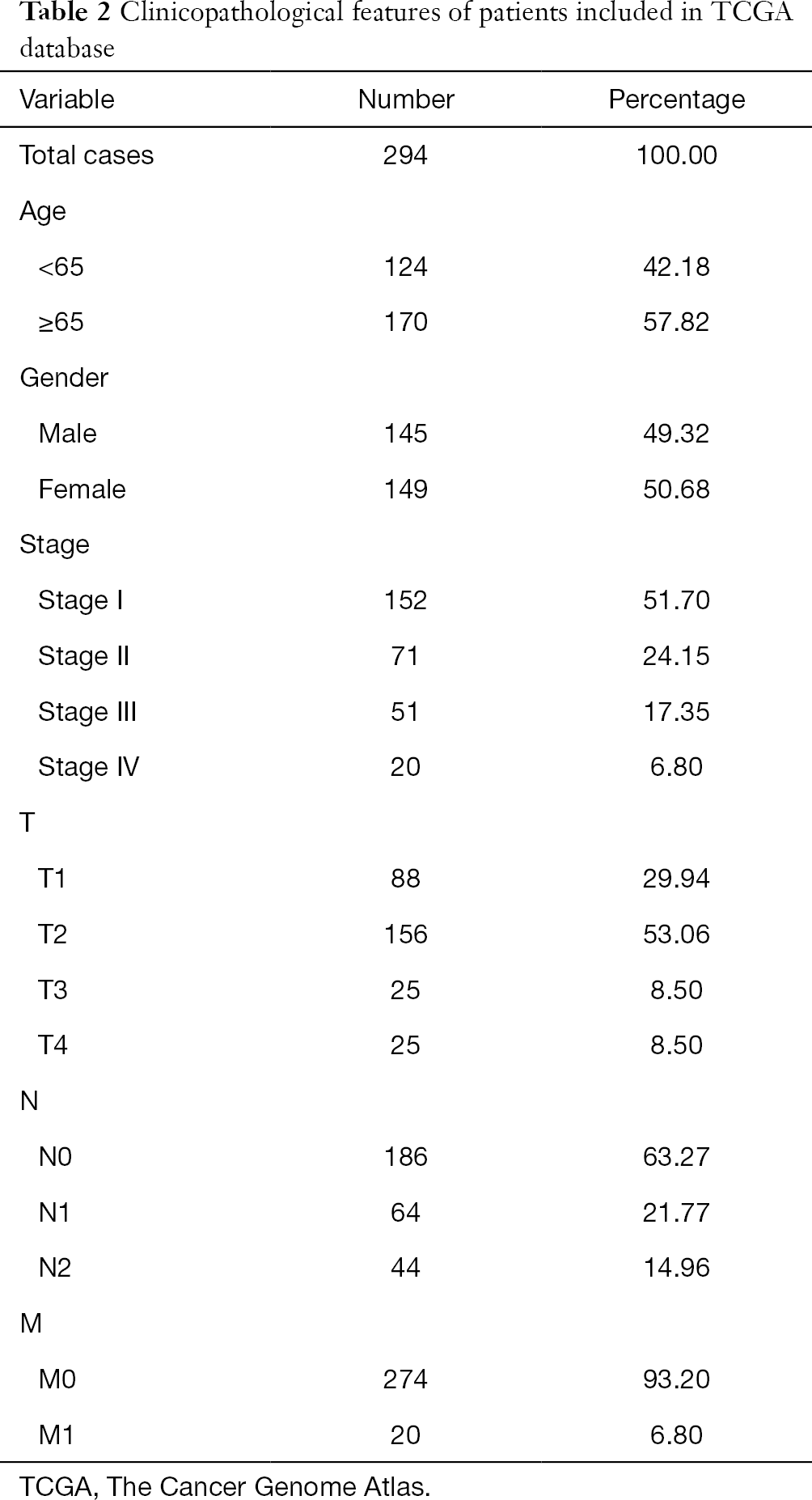 Also, the test set data was downloaded from the Gene Expression Omnibus (GEO) database (https://www.ncbi.nlm.nih.gov/geo/) under the accession number (GSE37745). It is used to test the reliability of the Cox risk models constructed from TCGA. Sixty-seven tumor cases from lung adenocarcinoma and clinical information include age, gender, stage, OS, and survival status (Table 3). 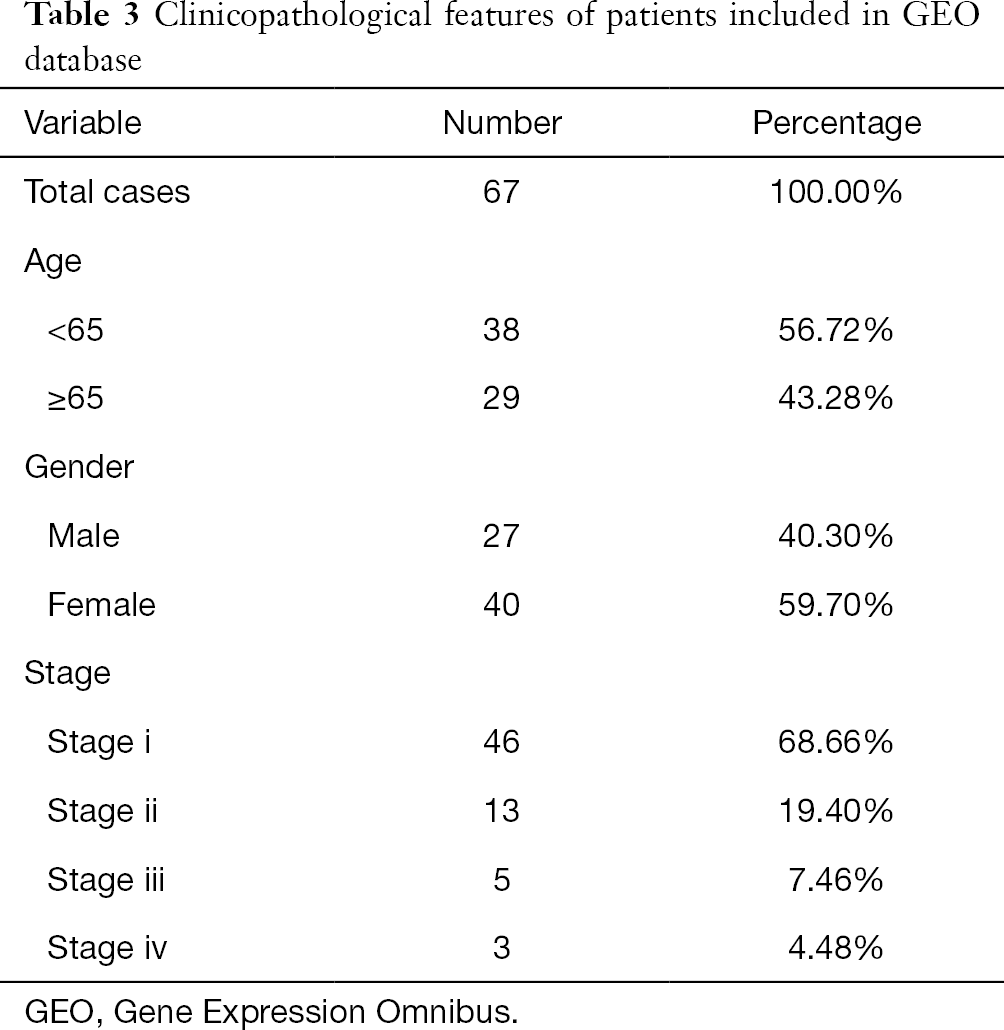 To investigate the role of different RNA methylation regulators in lung adenocarcinoma, we removed adjacent samples and grouped tumor samples using the “Consensus Cluster Plus” package. Principal component analysis (PCA) analysis was used to test the clustering effects. Combined clinical information, we draw survival curves to analyze the survival differences of different subgroups and draw heatmaps to explore the correlation between subgroups and clinical characteristics.

To clarify the prognosis risk of the RNA methylation regulators, we use the “survival” package to constructed Cox models to screen out risk molecules and divide patients into the high-risk group or low-risk group. We calculated the risk score using the following formula, where Coefi is the coefficient, and xi is the expression value of each selected molecule. Receiver operating characteristic (ROC) curve was used to test model effectiveness. Multivariate Cox regression was used to analyze the independent prognostic role of the risk model.

Lastly, gene set enrichment analysis (GSEA) is used to find the possible mechanism of RNA methylation affecting the prognosis of lung adenocarcinoma. The whole gene expression data of patients in the various risk groups were uploaded to the GSEA v4.0.3 (www.gsea.com) and the Kyoto Encyclopedia of Genes and Genomes (KEGG) software for analysis, which was performed with 1,000 iterations. The pathways that may be enriched in the different risk groups are scored. Screen the KEGG pathway based on the enrichment score.

Statistical analysis of all RNA-seq transcriptome data was conducted using R v3.4.1 (https://www.r-project.org/). Wilcoxon test was used to compare the differences in the expression of RNA methylation regulators between different tumor stage or between tumor tissues and adjacent tissues. OS is deﬁned as the interval from the date of diagnosis to the date of death. The Kaplan-Meier method was used to compare the OS of the patients in distinct groups. A chi-square test was used to analyze the correlation between the separate groups and clinical characteristics. P<0.05 was considered statistically significant. 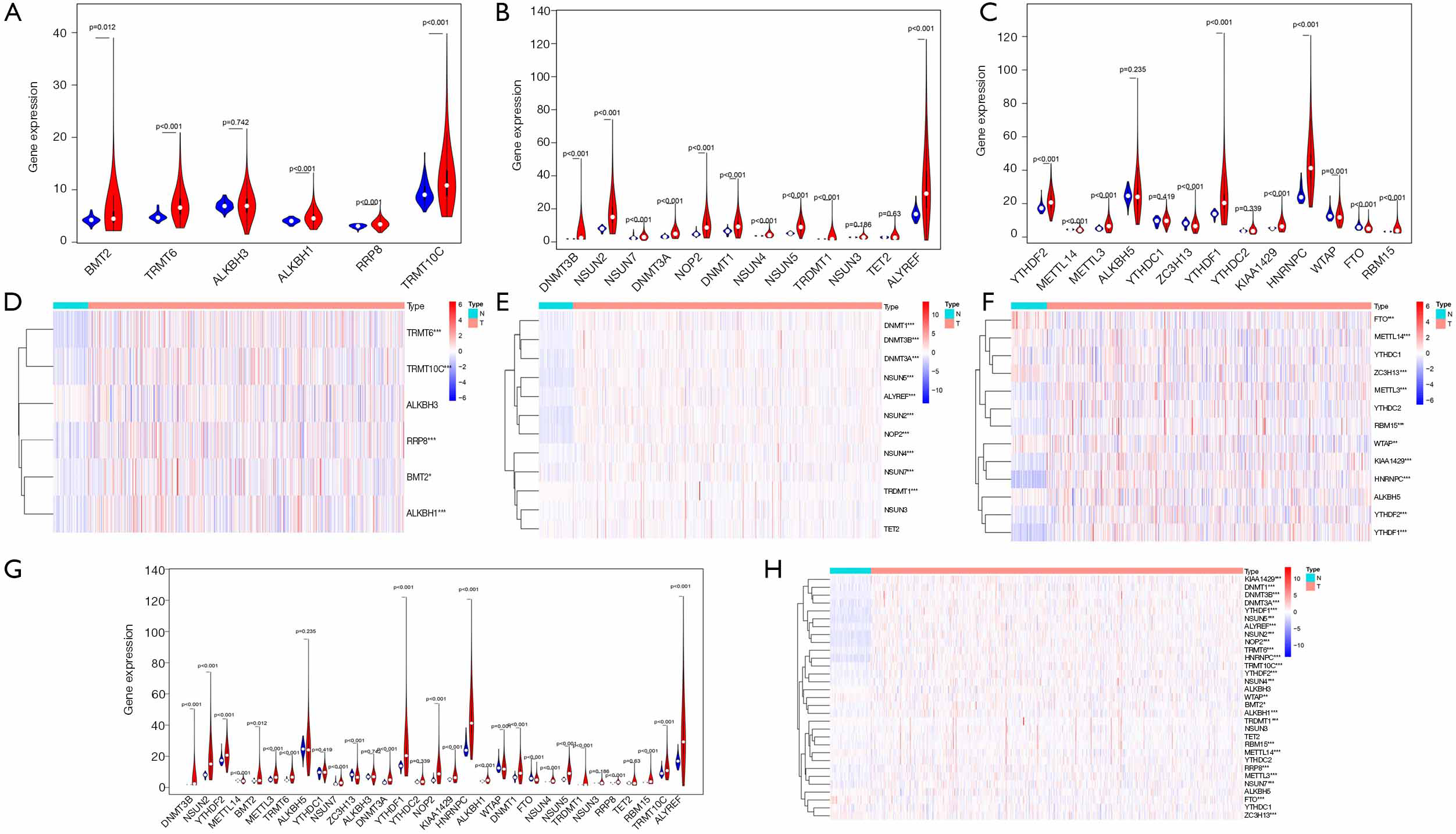 After removed adjacent samples, we grouped cancer samples using the “Consensus Cluster Plus” package. Considering the clustering stability and the number of each group, we divided the patients into two subgroups clustered by k=2. In the cluster models of lung adenocarcinoma, we can see that the distribution of the two subgroups of the m1A model overlaps (Figure 2A,B,C), while the other models show good dispersion by PCA (Figure 2D,E,F,G,H,I,J,K,L). These results show that our classiﬁcation by RNA methylation regulators are correct. 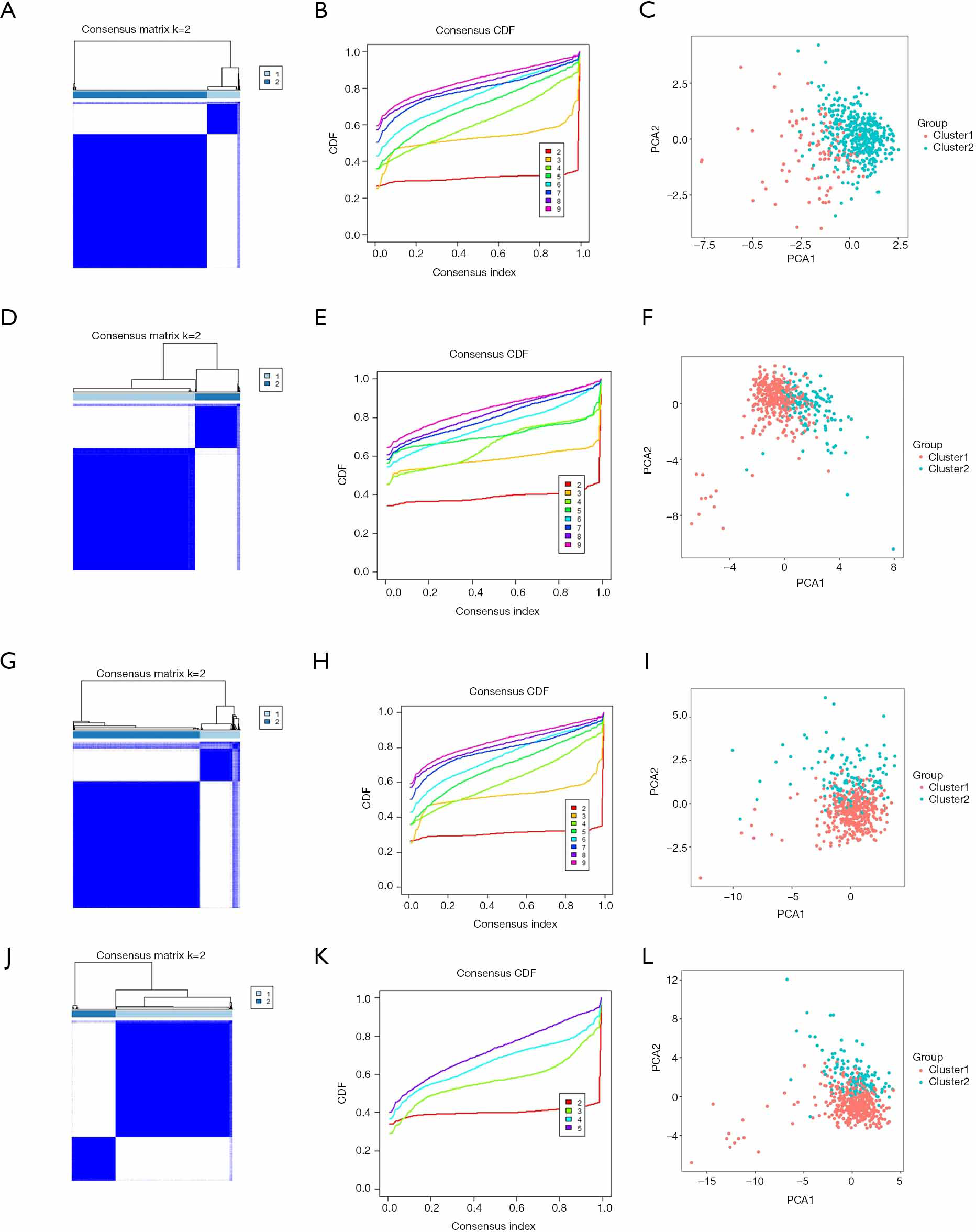 To better understand the correlation between clustering results and clinicopathological features, we performed a survival analysis with the OS. The model constructed by m1A methylation regulators does not show differences in survival or correlation with clinicopathological features (P>0.05) (Figure 3A,B). However, there are significant differences in survival between tumor subgroups of m5C and m6A models, which is also related to the clinical characteristics of stage, T, N, and M classification (P<0.05) (Figure 3C,D,E,F). The analysis results for all methylation regulators model are consistent (Figure 3G,H). Overall, these results suggest are consistent. Further analysis of the models suggests that cluster 2 patients had a lower five-year survival rate and this population is more likely to have a higher stage, lymph node metastases, and distant metastasis, indicating a poor clinical prognosis. 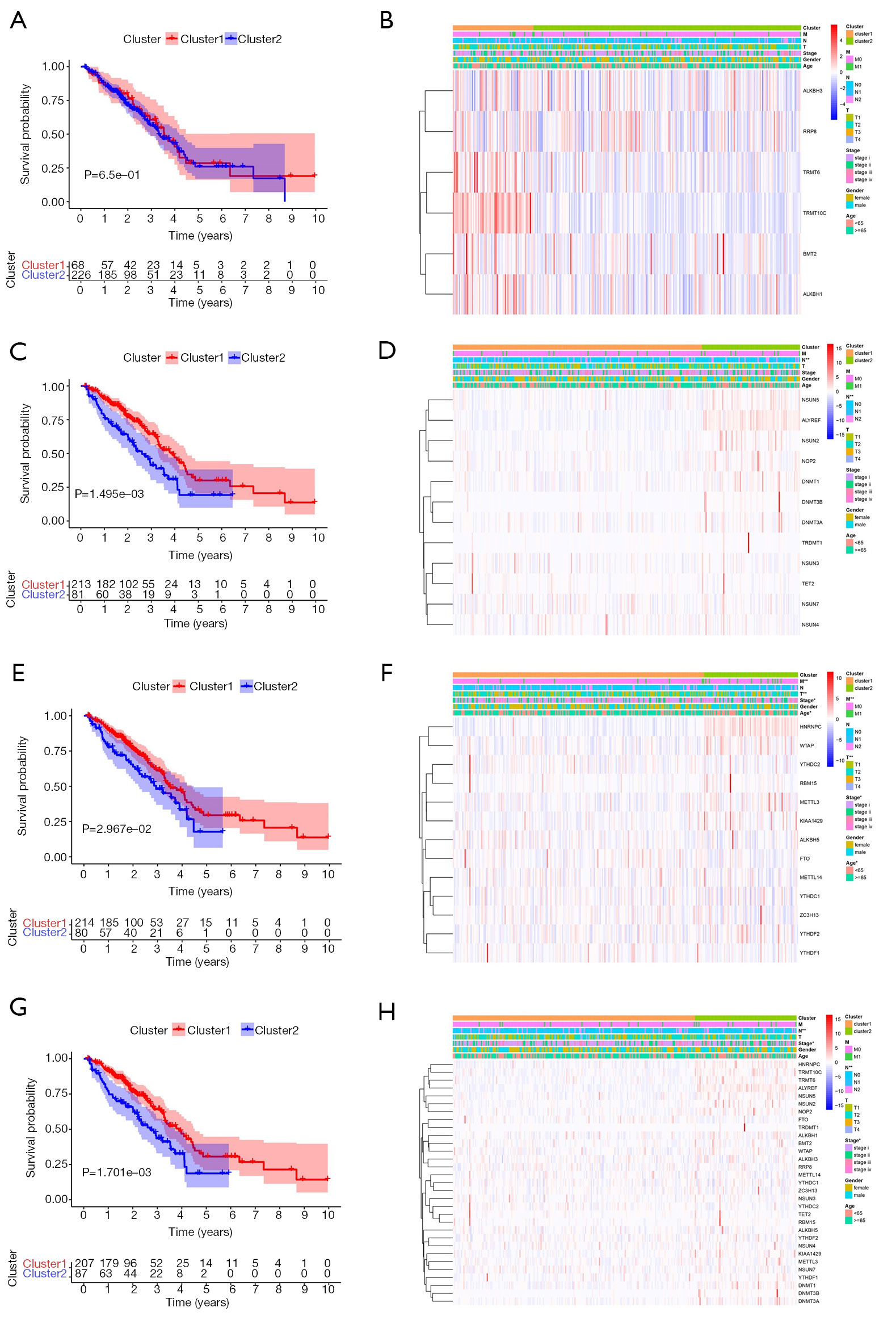 To better understand the prognostic role of RNA methylation regulators in lung adenocarcinoma, we constructed Cox models combining with the expression of RNA methylation regulators and OS from the TCGA database. Based on the risk score, patients were divided into high-risk and low-risk groups. The risk score coefficients of different risk models are shown in Table 4. The survival rate of the high-risk group in m1A prognostic signature is lower than that of the low-risk group (P<0.05), and the prediction effect is high (AUC=0.73) (Figure 4A,B). The prognostic signatures of m5C and m6A also show significant differences in survival (P<0.05), of which m5C signature has a higher predictive effect (AUC: 0.77) and m6A signature has the lowest predictive effect (AUC: 0.71) (Figure 4C,D,E,F). The prognostic signature constructed by all RNA methylation regulators has the highest predictive effect (AUC=0.82) (Figure 4G,H). 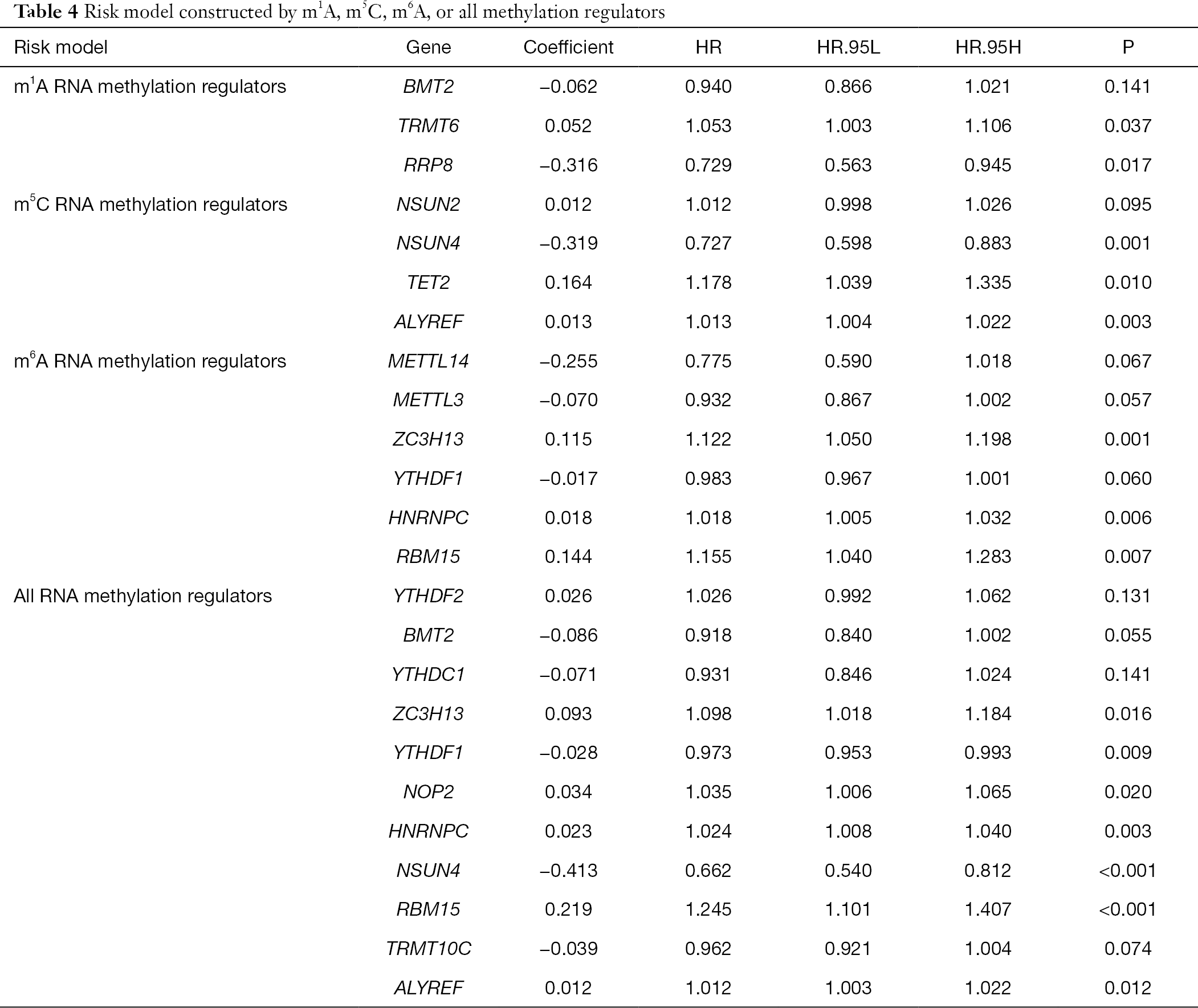 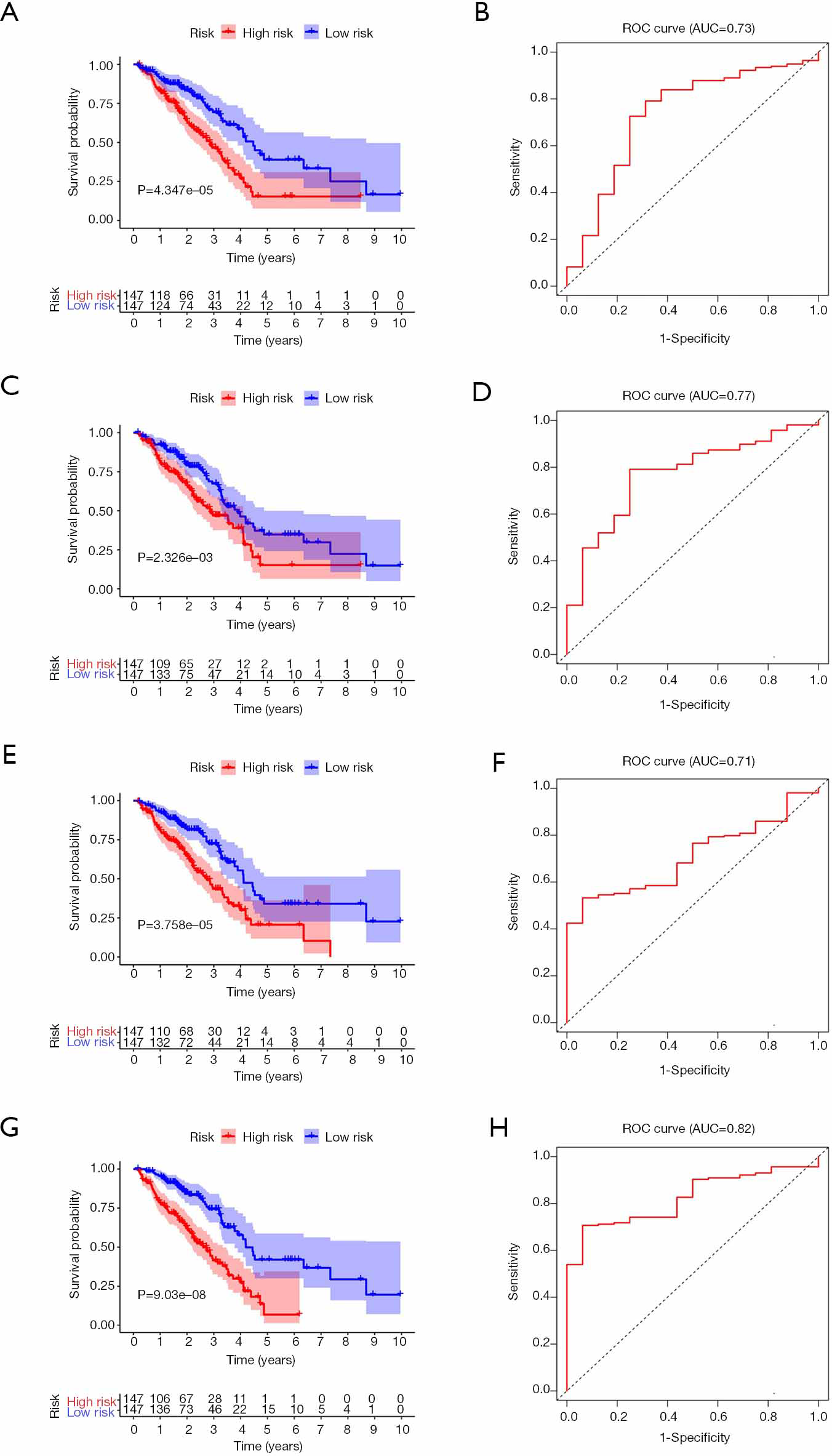 We further used univariate and multivariate Cox regression to explore the predictive value of the signatures, as well as the associations between the clinicopathological characteristics. The analysis results of all prognostic signatures are consistent. Risk score in those signatures can be independent risk factors affecting the prognosis of lung adenocarcinoma (HR>1, P<0.05), and the high-risk patients are more likely to have a higher stage, more lymph node metastases, and distant metastases, indicating a poor clinical prognosis (Figure 5). 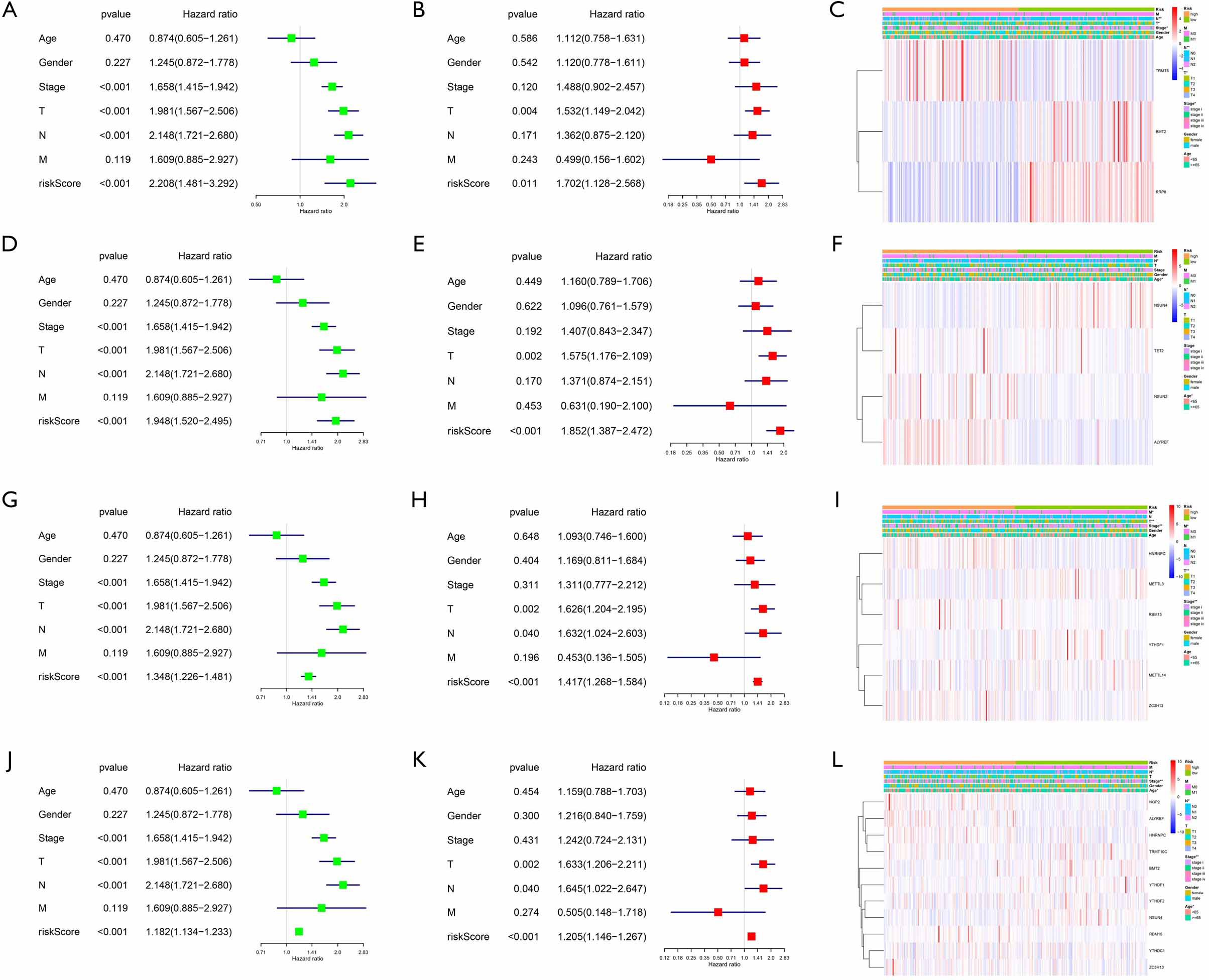 To test the reliability of the risk models based on TCGA data, we use the GSE37745 dataset from the GEO for validation. By calculating the patient’s risk score, all the patients are divided into a high-risk group or low-risk group. The survival rate of the high-risk group in m1A prognostic signature is lower than that of the low-risk group (P<0.05), which is consistent with the training set, but the prediction effect is general (AUC =0.65) (Figure 6A,B). The prognostic signatures of m5C and m6A also show significant differences in survival (P<0.05), with higher predictive effects (AUC: 0.75–0.76) (Figure 6C,D,E,F). The prognostic signature constructed by all RNA methylation regulators has the highest predictive effect (AUC =0.79) (Figure 6G,H). 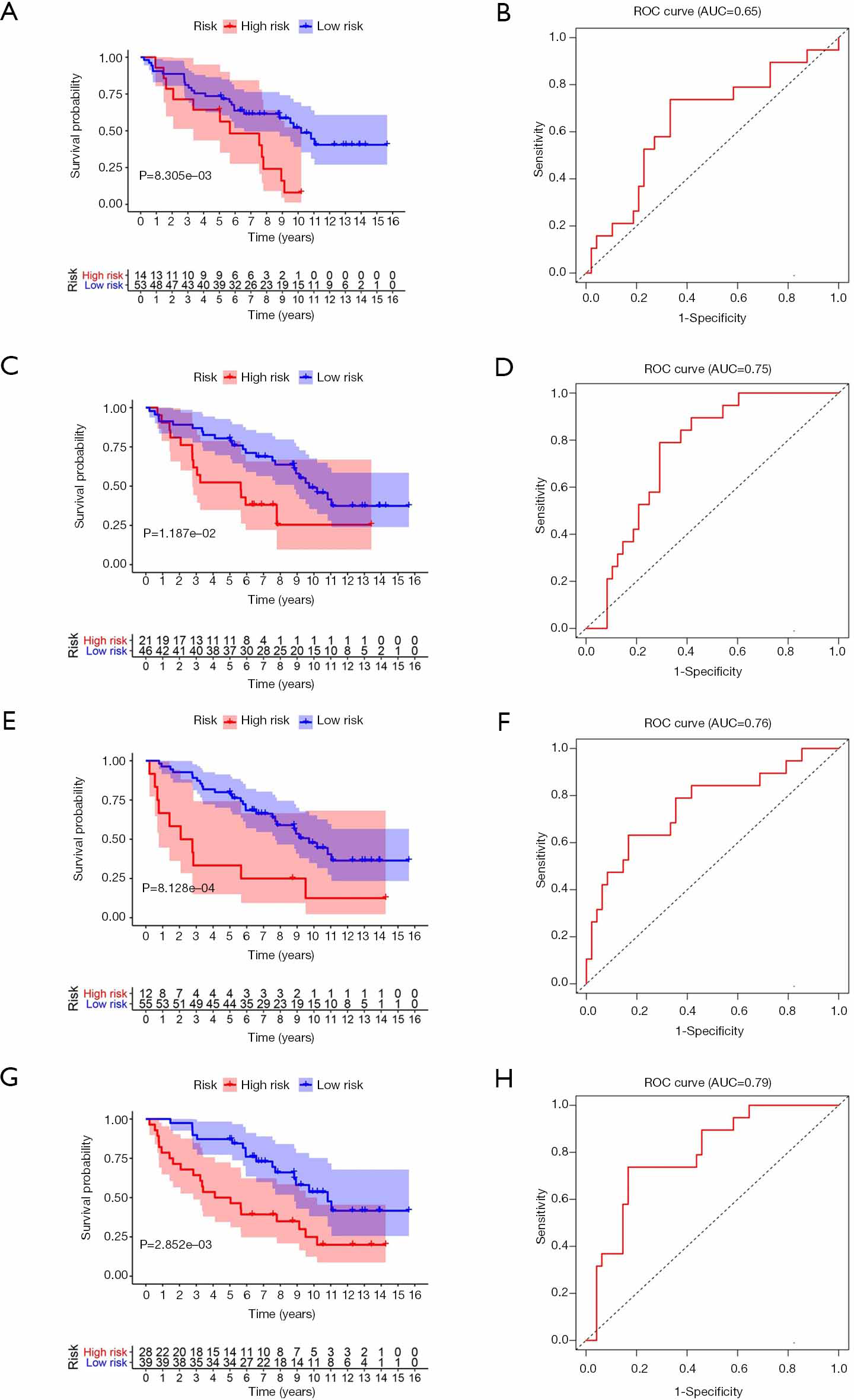 The test set only followed the patient’s gender, age, and stages, and we also performed univariate and multivariate Cox regression analysis. These results are a bit different. The risk score of the m1A signature can be a risk factor that affects the prognosis of lung adenocarcinoma (HR >1, P<0.05), but it has no correlation with clinical features (Figure 7A,B,C). The analysis of the m5C signature is not statistically significant (P>0.05) (Figure 7D,E,F). The risk score of other signatures also can be independent risk factors for the prognosis of lung adenocarcinoma (HR >1, P<0.05) (Figure 7G,H,I,J,K,L). Generally, the test set successfully verifies the results of the training set, which suggests that RNA methylation is a valid marker for predicting patients with lung adenocarcinoma. 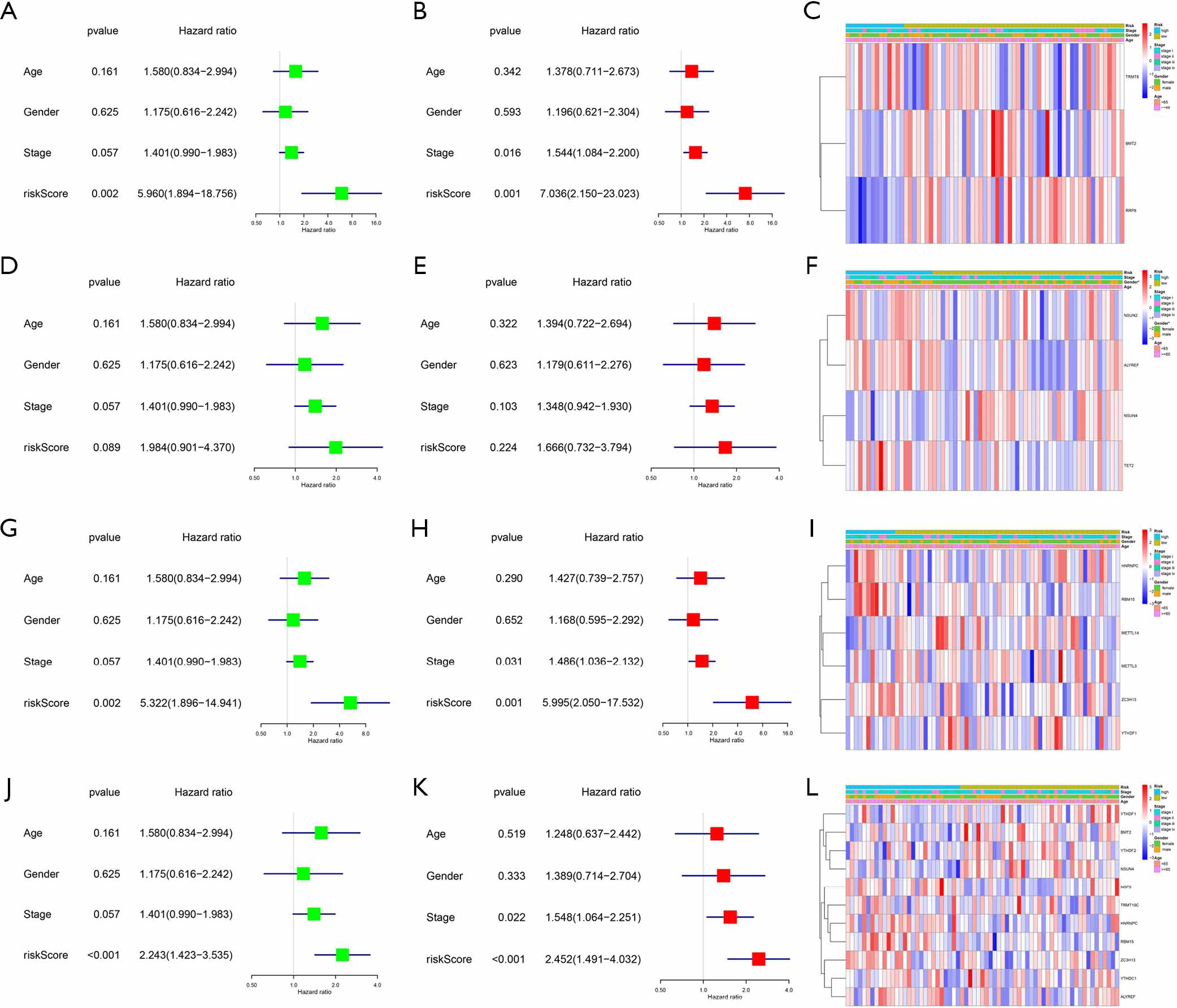 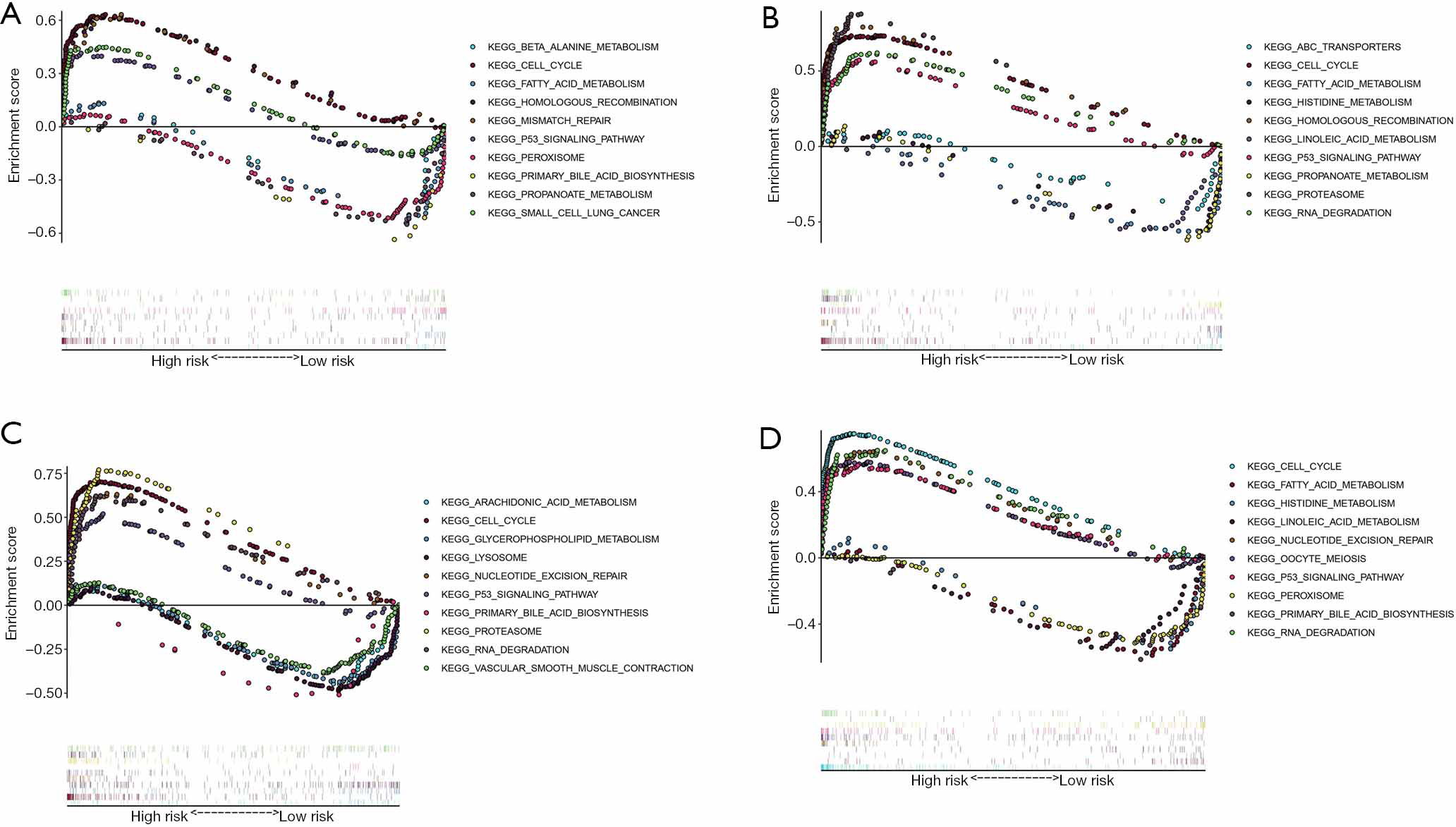 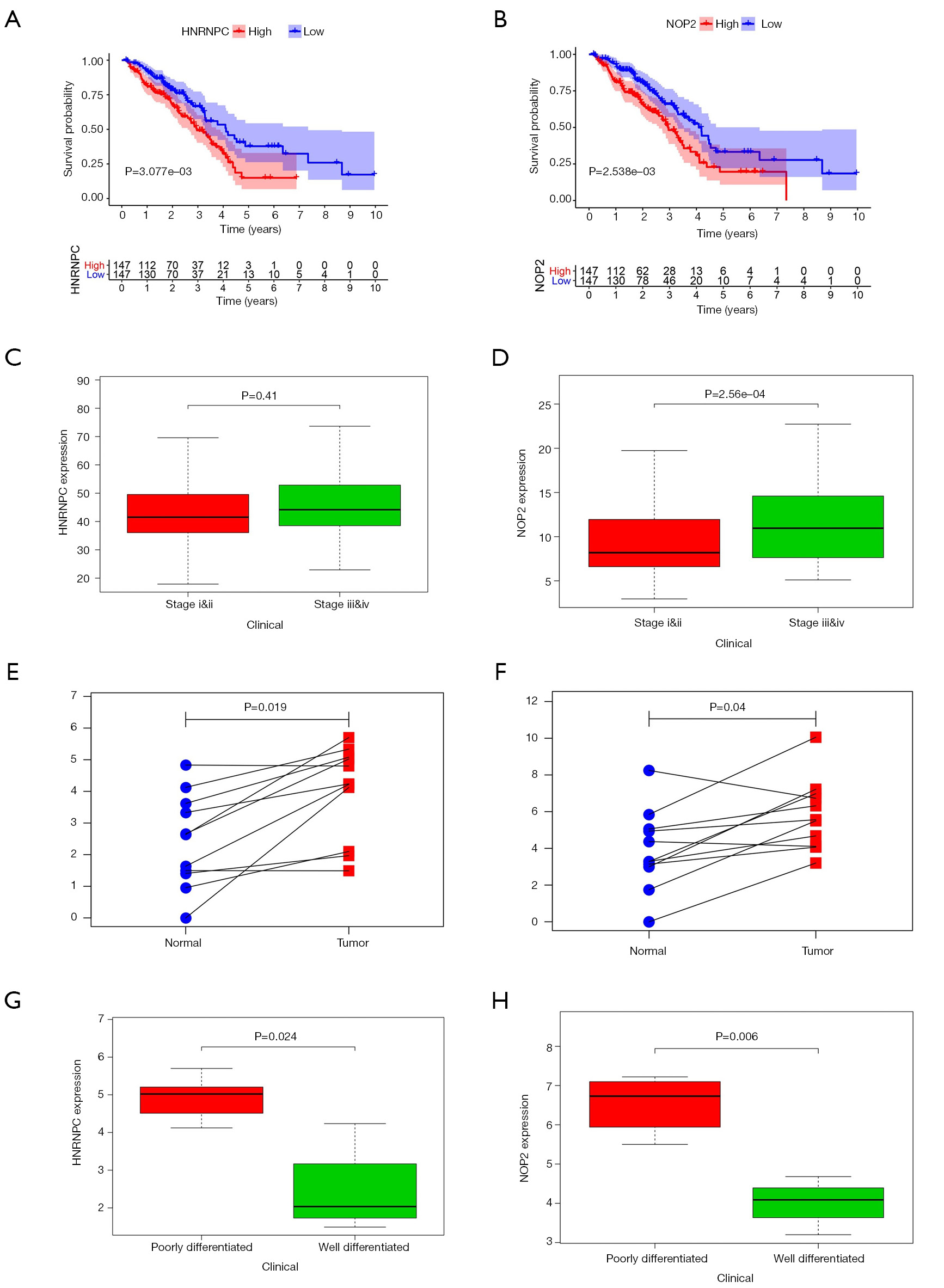 Over the past decade, people recognized that the occurrence and development of lung cancer is a complex process involving many factors, and different molecular expressions have variable drug responses and clinical prognosis to patients. Traditional tumor staging only depends on tumor volume and metastasis, which cannot take into account the patient’s gene expression level (23). The mutation rate of functional driver genes in lung adenocarcinoma is about 60%, of which KRAS, EGFR mutation, and EML4-ALK fusion is the most common driver gene, accounting for about 35% to 40% (24). Kris’s study found that the median survival time of patients with such type of driver gene mutation receiving targeted therapy was prolonged by 2–4 years compared with other patients (25). The study of genetic changes in lung squamous cell carcinoma was later than lung adenocarcinoma. TP53, KRAS, GRM are the common gene mutations (26). Weiss’s research found that about 20% of lung squamous cell carcinomas have FGFR1 amplification. Inhibition of FGFR1 in cell lines and mouse models can inhibit cell growth and induce apoptosis (27). These studies suggest that the new molecular typing research is expected to predict the clinical prognosis of patients more from the molecular level.

RNA methylation also regulates tumorigenesis and development, drug response, and stem cell renewal. Zhou’s study found that FTO enhances the chemo-radiotherapy resistance both in vitro and in vivo through regulating the expression of β-catenin by reducing m6A levels in its mRNA transcripts (33). Cui’s research suggests that m6A mRNA modification is critical for glioblastoma stem cell self-renewal and tumorigenesis. Knockdown of METTL3 or METTL14, key components of the RNA methyltransferase complex, promotes human glioblastoma stem cell growth, self-renewal, and tumorigenesis (34). Chen’s research found that m5C RNA methylation promotes the pathogenesis of bladder cancer through stabilizing mRNAs, and high expression of NUSN2 predicts poor survival (35). In the study of TCGA, literature reported that m6A RNA methylation regulators contribute to malignant progression and have a clinical prognostic impact (15,36). These studies have suggested that RNA methylation not only plays a role in tumor progression but can also be a signature to predict clinical prognosis, but there are few studies on the effect of RNA methylation on lung cancer. We obtained a large number of patient cases and clinicopathological features by downloading lung adenocarcinoma data from the TCG database. We likewise mined the GEO database, but with a lower number of cases, which lends itself to doing studies that validate the TCGA results. The analysis and validation of these data provide the basis for a prognostic study of RNA methylation in lung adenocarcinoma.

We thank our anonymous reviewers for their valuable comments on this manuscript, which have led to many improvements to the article.

Funding: This study was supported by the Program Funded by Liaoning Province Education Administration (grant No. QN2019003).

Conflicts of Interest: All authors have completed the ICMJE uniform disclosure form (available at http://dx.doi.org/10.21037/atm-20-3744). The authors have no conflicts of interest to declare.

Ethical Statement: The authors are accountable for all aspects of the work in ensuring that questions related to the accuracy or integrity of any part of the work are appropriately investigated and resolved. The study was conducted in accordance with the Declaration of Helsinki (as revised in 2013). The study was approved by ethics board of The First Affiliated Hospital of China Medical University (No. YB M-05-02) and informed consent was taken from all the patients.