Extended surgery time and massive intraoperative bleeding are two main factors that contribute to morbidity and mortality in hepatectomy (1-4). Moreover, hemorrhage and subsequent blood transfusion can decrease the recurrence-free and overall survival time of patients with malignant diseases (5-7). As most of the bleeding occurs during the parenchyma transection, much effort, including intermittent total inflow occlusion (i.e., the Pringle maneuver) and low central venous pressure (CVP) technique in anesthesia, has been made to control the amount of intrasurgical hemorrhage (8,9). Considering that these methods can induce ischemia and reperfusion injury to the liver (10-12), the technique adopted for parenchyma transection has been recognized as the most crucial factor to prevent bleeding and reduce complications.

The clamp-crushing technique (CCT), which was introduced in the 1970s, has become the most popular technique for parenchymal transection for its availability and simplicity in bleeding control, and it has been accepted as the gold standard technique for parenchyma transection in liver resection (13-15). One meta-analysis revealed that the CCT had faster dissecting speed, less intrasurgical bleeding, and a similar rate of morbidity when compared with other transection techniques such as the hydrojet and radiofrequency dissection sealer, and the cavitron ultrasonic surgical aspirator (CUSA) (16). However, in resent clinical practice, we found that the liver parenchyma could be dissected quickly using tissue scissors and bipolar electrocoagulator, and this method lead to clearer exposure of the intrahepatic vascular and biliary structures and less intrasurgical hemorrhage than the CCT. We named this sharp dissection method the “snip-electrocoagulation technique” (SET). Here, we introduce this novel technique in detail and evaluate its safety and effectiveness in comparison to CCT for parenchyma transection in liver resection. We present the following article in accordance with the STROBE reporting checklist (available at http://dx.doi.org/10.21037/atm-20-3019).

From July, 2017, to July, 2018, 98 consecutive patients underwent liver resection using either CCT or SET with the same surgical team at our department. The patients were assigned into two groups: 50 patients received sharp liver resection using tissue scissors and bipolar electrocoagulator (Figure 1) from January, 2018, to July, 2018, (SET group), and 48 patients received parenchyma transection using Kelly forceps from July, 2017, to December, 2017 (CCT group). The clinical and operative data (the real-world data) of the patients are presented in Table 1. The types of hepatectomy are presented in accordance with the Brisbane terminology (17). The tumor-free margins (i.e., the distance between the lesion and its closest margin) were determined as previously described (18). Patients signed informed consent preoperatively. This study protocol was approved by the hospital institutional review board. 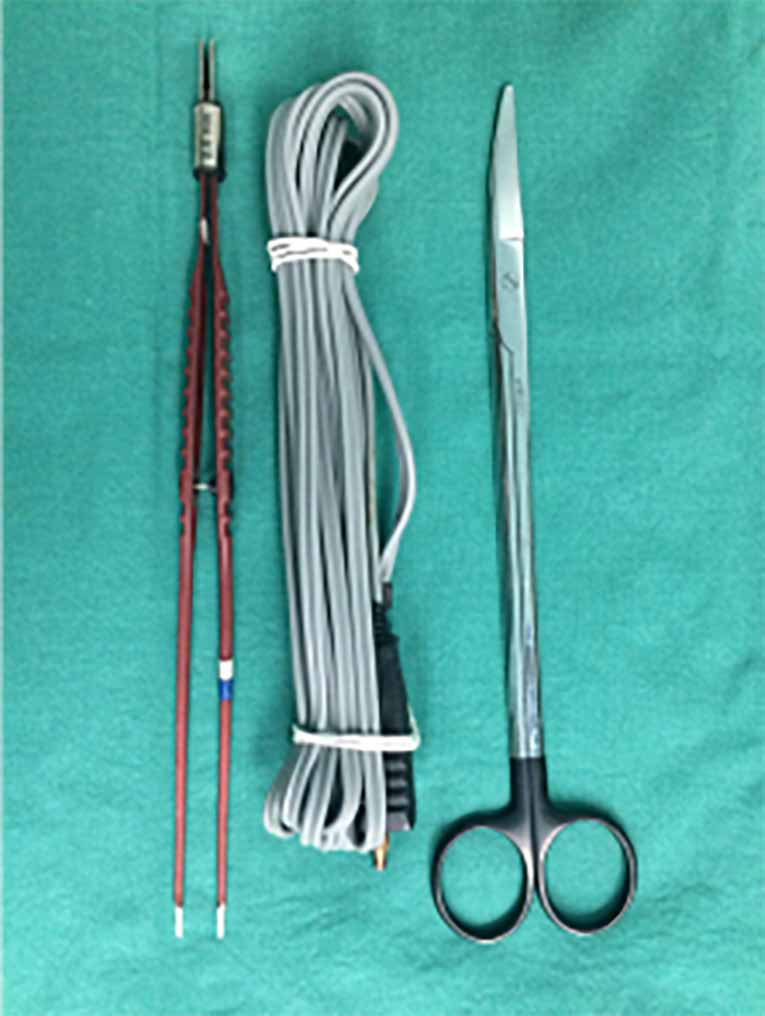 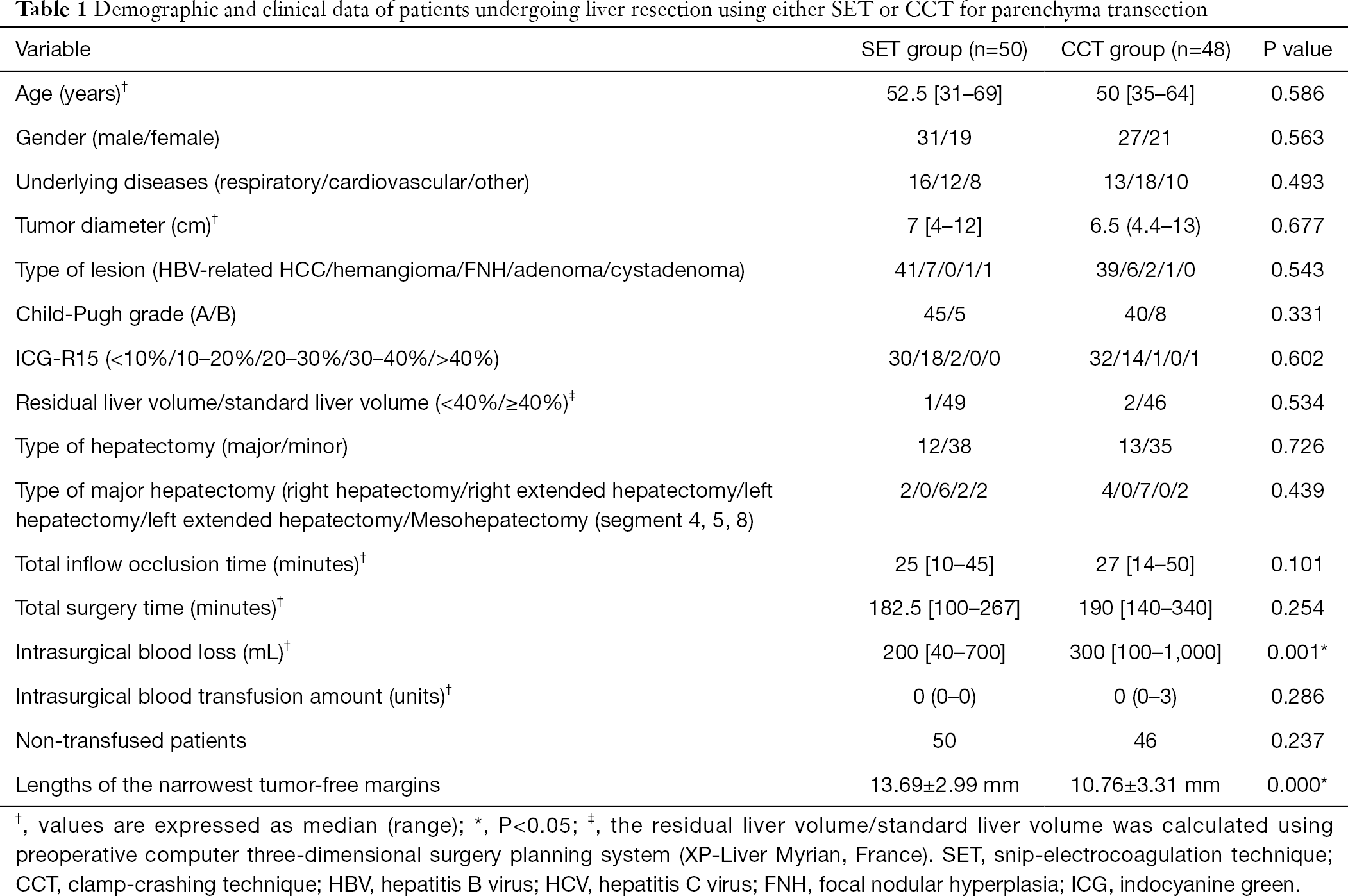 First, the perihepatic ligaments were transected to fully mobilize the liver. Intermittent inflow occlusion (the Pringle maneuver, 15 min of occlusion and 5 min of release) was routinely used. Liver outflow was occluded only when the lesion was closely adjacent to the major hepatic veins or inferior vena cava (IVC). The hepatic parenchyma on both sides of the cut surface was sutured for traction. A low (0–5 cmH2O) CVP was maintained during the whole period of parenchyma transection. After the operation, anti-infection and liver-protecting therapies were given routinely, and albumin was supplemented when necessary.

The SET maneuver was composed of four principal surgical actions. (I) Snipping with scissors (Figure 2A): liver parenchyma within 2 cm deep into the liver surface was snipped apart using tissue scissors. (II) Pushing with scissors (Figure 2B): the deeper parenchyma near the vascular and biliary structures was pushed open in parallel using tissue scissors to reveal the vessels. (III) Electrocoagulation with bipolar electrocoagulator (Figure 2C): during dissection, the fine branches of the Glissonean pedicles (diameter ≤1 mm) and tiny tributaries of the hepatic veins (diameter ≤2 mm) were electrocoagulated (the power setting of the electrosurgical generator was 70 Hz) directly with bipolar electrocoagulator and then snipped using tissue scissors, with an aspirator being used to keep the surgical field clean. The separated liver parenchyma was also electrocoagulated simultaneously during the two steps above to reduce hemorrhage. (IV) Ligation with sutures (Figure 2D): the larger identified vessels (diameter >1 mm for Glissonean pedicles or diameter>2 mm for hepatic veins) were exposed using tissue scissors and ligated using 2-0 or 3-0 silk sutures before snipping. When necessary, the main hepatic veins were sutured to avoid suture slippage. Small breaks on the hepatic veins were sutured using 5-0 Prolene sutures for hemostasis. The 4 steps above were repeated until the tumor was removed. Afterwards, residual bleeding on the cut surface of the liver remnant was controlled by bipolar electrocoagulator or by placing additional sutures. Then, pressure was applied on the cut surface with white gauze to identify possible bile leakages. Finally, a rubber drainage tube was placed underneath the right diaphragm and/or beside the liver cross section. A video of mesohepatectomy using SET is provided (Video 1). 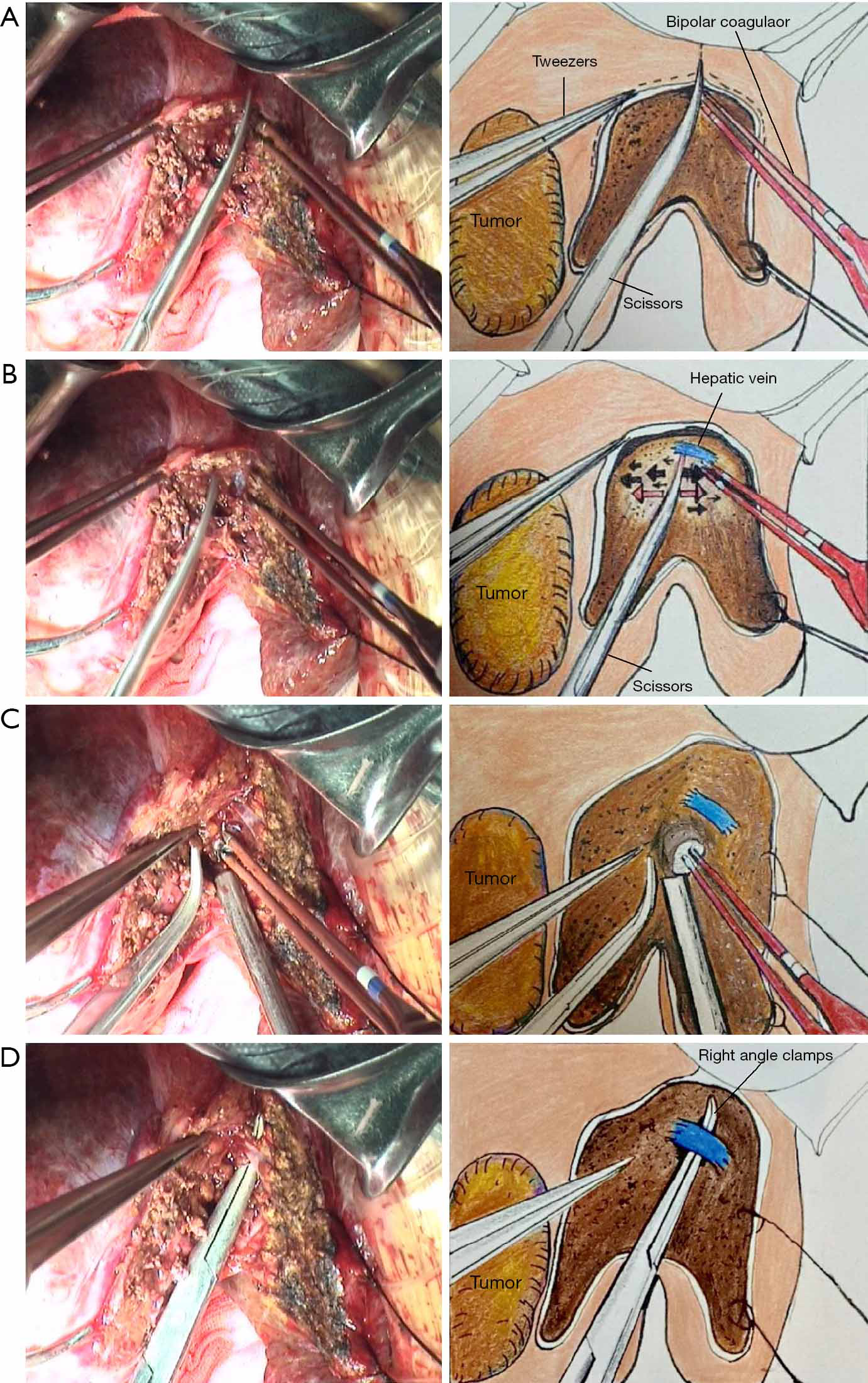 In the CCT group, the liver parenchyma was crushed by applying Kelly clamps serially before cutting it open using tissue scissors. The intrahepatic vessels were clamped only on the reserved side of the liver. Sutures (2-0 or 3-0) were then placed over the Kelly clamps for ligation. Bipolar electrocoagulator was not used for hemostasis.

There was no significant differences between the two groups in terms of age, gender, underlying diseases, tumor diameter, type of lesion, liver function, type of hepatectomy, total inflow occlusion time, total surgery time, intrasurgical blood transfusion amount (median value 0 in both groups), and non-transfused patients. However, the SET group yielded less intrasurgical blood loss than the CCT group (median 200 vs. 300 mL; P=0.001). The narrowest tumor-free margins were longer in the SET group (41 malignant tumors) than in the CCT group (39 malignant tumors): 13.69±2.99 vs. 10.76±3.31 mm, respectively (P=0.000) (Table 1). The overall incidence of postoperative complications was 16% in the SET group and 31.2% in the CCT group (P=0.075). The lengths of the intensive care unit stay and postoperative hospital stay (median 7 vs. 8 days) were comparable (Table 2). No patient died in the current study.

Reducing bleeding in liver resection remains a key issue, as it is an important predictive indicator for prognosis (19). Improving the methods of inflow control, parenchyma transection, and operation section management are the 3 strategies aimed at managing this issue (2). We routinely use intermittent total inflow occlusion and low CVP anesthesia in hepatectomy, and they have been proven to be effective in avoiding severe hemorrhage from the Glissonean pedicle and hepatic veins. However, they can inevitably lead to elevated transaminase level after surgery through ischemia and reperfusion injury (10-12). Therefore, the technique adopted for parenchyma transection is regarded as the most crucial factor for preventing bleeding and reducing complications (20).

Although many technology-assistant transection methods (ultrasonic scalpel, CUSA, the radiofrequency and the hydrojet dissection sealer) have been developed, none of them have demonstrated to have significant advantages over CCT in parenchyma damage, total inflow occlusion time, intrasurgical blood loss, mortality, morbidity, or hospital stay (15,16,21). As a result, surgeons still choose transection methods according to their own experience and preferences. In addition, considering that these high-tech devices and disposable materials increase the medical cost of liver surgery, a new operation protocol which can reduce the economic burden of patients without compromising the prognosis is still needed (22).

Indeed, crushing the liver parenchyma using a Kelly clamp and ligating the intrahepatic vessels is an easy-to-apply and economical method, and we have been using CCT in hepatectomy for many years. However, we have noticed that CCT may lead to severe hemorrhage, as it involves a concerning degree blindness particularly when holding the liver tissues in a rough way. For example, sometimes the intrahepatic vessels are clamped only partially and then transected, which leads to severe hemorrhage. In addition, some small blood vessels may get broken during clamping or a large bunch of the liver tissue can slip during ligation. These are the reasons why the amount of blood loss and postoperative bile leakage were greater in the CCT group than in the SET group.

Another advantage of SET is that it is convenient and fast to use tissue scissors and bipolar electrocoagulator to achieve sharp separation and hemostasis in liver resection. Particularly if the liver is mild to moderately cirrhotic, the Glissonian pedicles (with a thick white walls) and hepatic veins (with thin blue walls) can be revealed more clearly before ligation and transection, thus reducing the possibility of false injuries and the time needed for hemostasis. Unlike CCT, which usually demands a bleeding point and vascular suture after restoring blood flow to the liver, we found that the liver section almost did not bleed in the intermittent inflow block, and that the operation field was clean (Figure 2), as the parenchyma was coagulated during transection. This finding is supported by Kamarajah et al., who reported that the bipolar cautery technique was efficient in controlling intrasurgical bleeding and was associated with the shortest surgery time in the study (19).

Moreover, in terms of oncology, patients in the CCT group had shorter tumor-free margins, which was likely a result of the sacrificed liver parenchyma (about 0.3–0.4 cm) during each application of the Kelly clamp. Usually, this 0.3–0.4 cm was the space occupied by the closed blades of this clamp (18). As a result, the risk of non-R0 liver resection should be taken into consideration when the safety margin is anticipated to be narrow. By contrast, SET achieved more satisfactory tumor-free margins with little interference of the non-tumor liver parenchyma. This advantage makes it a more suitable parenchyma transecting technique in difficult liver surgery.

Another concern is that SET has increased medical cost when compared with CCT, likely due to the extra cost of bipolar electrocoagulator (about 1,500 CNY or 200 USD/person). However, the cost was still lower than when using CUSA and other modern devices. Furthermore, most patients’ medical insurance could cover the extra cost, so the financial burden of patients was not heavy. We deem this slight increase in cost to be acceptable considering the advantages of SET.

SET is a novel and safe technique for sharp parenchyma transection in liver resection. It has advantages in controlling the volume of blood loss and achieving better tumor-free margins compared to CCT, which make SET a promising surgical technique in hepatectomy. However, given the limited sample, further high-quality large-scale randomized clinical studies are needed.

We would like to thank Guo Long and Xi Hu for their help in data collection.

Funding: This work was supported by the Nature Science Foundation of Hunan Province (No. 2018JJ3812). The funder had no role in study design, data collection and analysis, decision to publish, or preparation of the manuscript.

Reporting Checklist: The authors have completed the STROBE reporting checklist. Available at http://dx.doi.org/10.21037/atm-20-3019

Conflicts of Interest: All authors have completed the ICMJE uniform disclosure form (available at http://dx.doi.org/10.21037/atm-20-3019). The authors have no conflicts of interest to declare.

Ethical Statement: The authors are accountable for all aspects of the work in ensuring that questions related to the accuracy or integrity of any part of the work are appropriately investigated and resolved. The study was conducted in accordance with the Declaration of Helsinki (as revised in 2013) and approved by the hospital institutional review board. Informed consent was taken from all individual participants.