Additionally, the need to resect the diaphragm is often realized by the surgeon intraoperatively, as tumor invasion of the diaphragm frequently is underestimated by the preoperative radiologic work-up (7,8). Differentiation between true invasion and dense adhesions liver adherence to the diaphragm is still difficult, even with the most advanced imaging techniques (8). This emphasizes the importance of having a clear routine to deal with diaphragm resection.

Most reports on this topic refer to open liver surgery, and laparoscopic simultaneous liver and diaphragm resection is thus uncommon and may be considered controversial (4-7,9-12).

During the recent 25 years, laparoscopy has tremendously changed the practice of gastrointestinal surgery (13-16). Besides, continuous improvement in imaging and systemic treatment regimens have altered both indications, techniques and outcomes in hepatic surgery (17).

The aim of this study was to assess the safety and value of simultaneous laparoscopic liver and diaphragm resection (SLLDR) in patients with colorectal liver metastases.

Oslo University Hospital is a high-volume institution for laparoscopic and open liver surgery. From August 1998 to January 2019 a total number of 1,233 LLR were performed in our institution, of whom 839 were performed for colorectal liver metastases. We here report outcomes from the cohort of patients that underwent SLLDR. The protocol has been approved by the institutional review board (protocol reference number 2015/13401).

Patients who underwent primary one-stage LLR for colorectal liver metastases from January 2008 to January 2019 were identified and included in this study. Patients that required simultaneous resection of other organs except the diaphragm or combined cryo- or radiofrequency ablations of the liver were excluded.

The surgical technique was described previously (18). Laparoscopic ultrasonography and presence of a range of advanced laparoscopic equipment were the prerequisites for LLR. An ultrasonic surgical aspirator, such as SonoSurg® (Olympus, Tokyo, Japan), or Selector®/CUSA® (Integra, Plainsboro, NJ, USA) and a bilobar coagulator LigaSure® (Medtronic, Minneapolis, MN, USA) were the main dissection instruments applied during the procedures.

Postoperative analgesia consisted of a nonsteroidal anti-inflammatory drug and intravenous paracetamol. Opioids were given if additional analgesia was required. The patients were encouraged to mobilize early and resume feeding as soon as tolerated. Tumor size was measured following specimen fixation in formaldehyde during the histopathologic analyses of the resected specimens. Procedures with a resection margin ≥1 mm and no signs for residual tumor in the liver were considered as R0-procedures. Perioperative mortality was defined as death within 90 days or before hospital discharge.

Following diaphragm resection, patients had a plain thoracic X-ray direct postoperatively and on the first postoperative day to evaluate any residual pneumothorax.

Patients were routinely followed every 4 months up to 24 months and then every 6 months up to 60 months by outpatient visits with clinical examinations, carcinoembryonic antigen assay and imaging studies.

Procedures were analyzed on intention to treat basis, i.e., cases converted to laparotomy were not excluded from the analyses. The data are presented as median (range), or number (percentage). To compare proportions between groups the Chi-square test or the Fisher exact test were used as appropriate. The Mann-Whitney test was used to compare continuous variables. The Life Tables and the Kaplan-Meier method were applied for survival analyses. Time defined survival values were presented in percentage ± standard error. Log-rank test was applied for comparison of survival between groups. Length of survival was described as mean [95% confidence interval (CI)].

A total of 467 patients fulfilled the inclusion criteria, of whom 12 patients needed a simultaneous diaphragm resection (group 1) while 455 underwent laparoscopic liver surgery alone (group 2). Patient demographic data was similar in both groups (Table 1). The median follow-up was 31 [1–128], and 26 [0–110] months for the patients in group I, and II respectively. 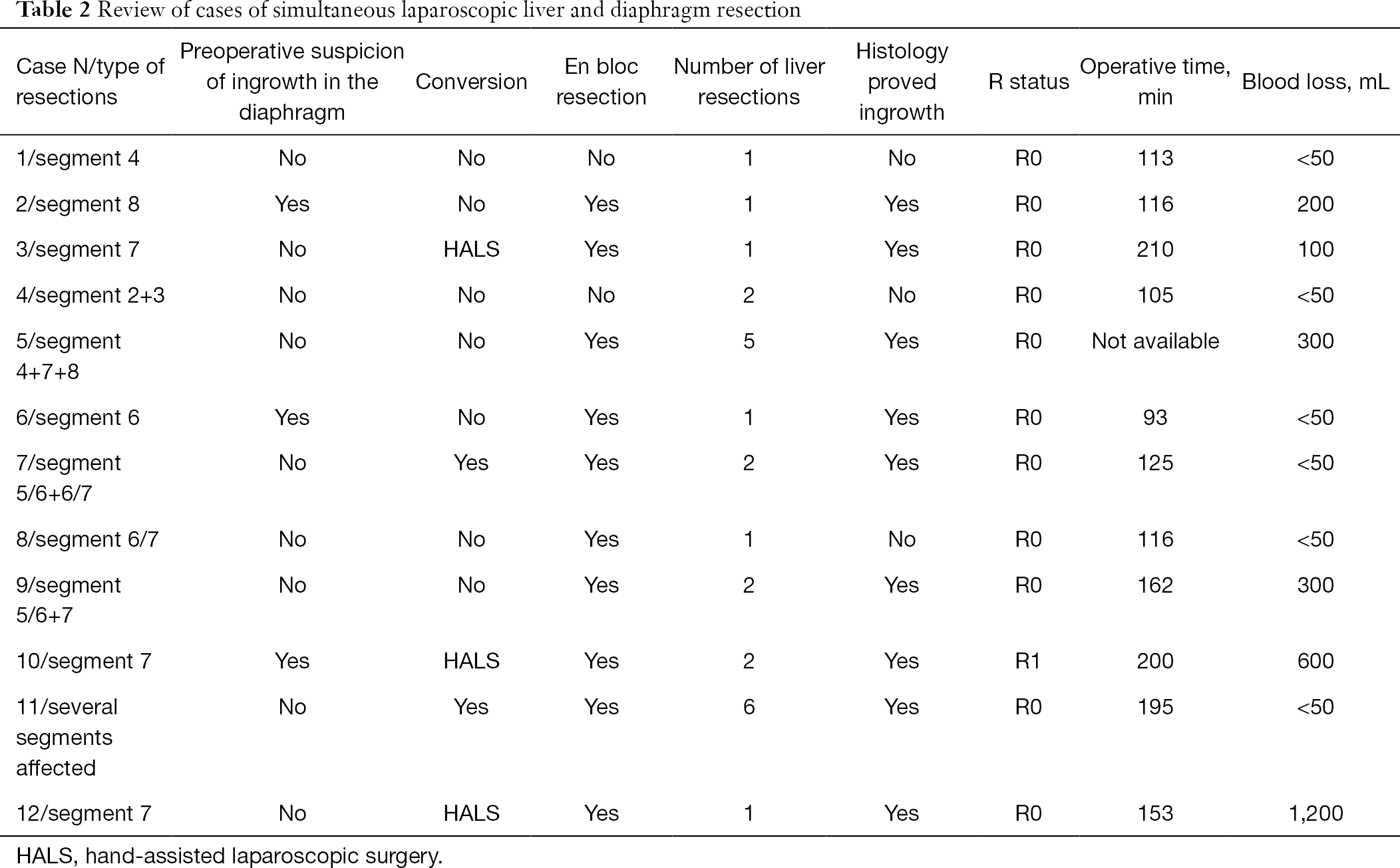 Operative time and blood loss were similar in two groups. One patient in group 2 died within 30 days (severe bleeding from the right hepatic vein, expired in a multiorgan failure postoperatively), there was no mortality in group 1. The median tumor size (largest tumor) was 22 [8–40] mm in group 1 and 21 [3–110] mm in group 2 (P=0.977). The rate of R0 resections was 91.7% and 77.8% in groups 1 and 2 respectively (P=0.508). There was no statistical difference in the rate of postoperative complications and postoperative stay between the groups (Table 4). 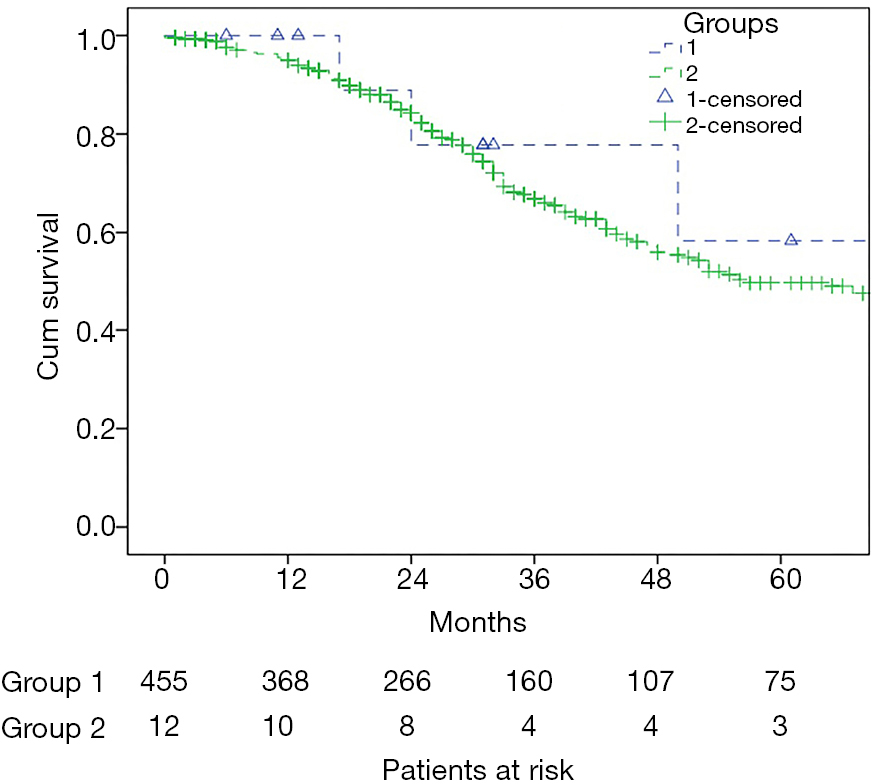 In the present series we showed the technical feasibility, safety and efficacy of diaphragm resection during laparoscopic liver surgery. This is reflected in median operative time, blood loos, postoperative hospital stay and rate of postoperative morbidity compiling 125 minutes, 100 mL, 2.5 days and 8.3%—data that corresponds to LLR without diaphragm resection in our series. Diaphragm resection was performed without compromising oncologic outcomes, with a R0 resection rate of 92% and 5-year overall survival of 58%.

Irrespective to the operative approach, the impact of diaphragm invasion is sparsely studied. Only few small series and one multicenter database study have analyzed specifically the surgical results of simultaneous liver and diaphragm resection (4-7,9-12).

It has been argued that in spite of improvements in imaging techniques, a reliable modality for preoperative diagnostics of tumor invasion to the diaphragm still does not exist (8). In our series imaging modalities showed only 33% of sensitivity to diagnose a tumor invasion to the diaphragm (preoperative radiologic suspicion in 3 out of 9 cases of histologically confirmed invasion), but 100% of specificity (all cases of preoperative radiologic suspicion were confirmed by histologic report). This underlines the importance of intraoperative diagnostics including intraoperative laparoscopic ultrasonography (22).

Technically, there are several challenging factors which have precluded surgeons from diaphragm resection during laparoscopic liver surgery. Tumors located in posterosuperior segments are more likely to grow into the diaphragm, and tumors in these segments are considered to be technically challenging (23,24). Patients with tumors in posterosuperior segments are still reserved for open liver resection in many institutions worldwide, although many leading hepatobiliary centers routinely perform LLR in these tumor locations (25,26).

However, SLLDR is technically more challenging to the surgeon than LLR only. This was reflected in a significantly higher rate of conversions to laparotomy in the group of SLLDR, 16.7% (2 cases) versus 2.4% in the group of LLR. Extensive adhesions were present in these two cases necessitating the conversions. There were also 3 (25%) additional cases of conversions to HALS. In all these three cases tumors were localized in the segment 7. We found HALS to be useful especially when performing diaphragm resection as it improves exposure and eases the closure of the defect in the diaphragm (27).

Development of pneumothorax might complicate good operative exposure. Different techniques can be applied to deal with this challenge. A transthoracic catheter may be utilized to evacuate the carbon dioxide from the pleural cavity, this allows retaining the diaphragm in a concave position (12). In our series, we have not considered this maneuver since the pneumothorax could be managed by placement of suction tip into the right pleural cavity. Some surgeons routinely apply a transthoracic trocar to improve surgical exposure when approaching tumors in the posterosuperior segments (28-32). In case of intraoperative finding that requires diaphragm resection this trocar port may be utilized for external suction of pneumothorax. We neither apply a transthoracic catheter or a transthoracic trocar, nor place thoracic drain and the end of the operation. In our experience, the residual pneumothorax dissolves rapidly and is usually not identifiable on the second postoperative day. It is possible that the routine use of a transthoracic trocar may prevent conversion to HALS. Interestingly, Lainas and colleagues reported a similar (14.3%) rate of conversions to open surgery in a series of seven patients undergoing SLLDR (12).

We consider the relatively high conversion rate in the SLLDR group as acceptable, as oncologic principles must prevail over the surgeon’s ambition to treat every patient with minimally invasive techniques. In view of the technical complexity of SLLDR, this procedure probably should be limited to expert centers.

Our study has several limitations. Most importantly, the number of patients in group 1 is low, so type 2 error may be present. The retrospective design is also a limitation, and there might be a selection bias where patients needing more complex diaphragm resections were operated with open liver resection. Further studies on this topic are required.

SLLDR can be performed safely with good short- and long-term outcomes in patients with colorectal liver metastases. We recommend en bloc resection when a liver tumor invades the diaphragm, and we find hand-assisted laparoscopic surgery useful in difficult cases.

Conflicts of Interest: AMK serves as an unpaid editorial board member of Annals of Translational Medicine from Dec 2018 to Nov 2020. The other authors have no conflicts of interest to declare.

Ethical Statement: The authors are accountable for all aspects of the work in ensuring that questions related to the accuracy or integrity of any part of the work are appropriately investigated and resolved. The protocol has been approved by the institutional review board (protocol reference number 2015/13401).