Endometriosis is a gynecological disease that affects 1 in 10 women worldwide and is characterized by the presence of lesions made up of endometrial cells (ECs) outside of the uterus. Symptoms associated with endometriosis include pain and infertility. It was realized in early last century that endometriosis is an inflammatory disease. Search for the mediators of this inflammation had been one of the key areas of research in understanding the etiology of this disease. Pioneering work by Halme, Olive, and Arici’s groups provided evidences for an inflammatory peritoneal milieu and the role for macrophages in endometriosis (1-3). Publications as early as in the 1980s showed that the peritoneal macrophages are present at higher levels in women with endometriosis-associated infertility when compared to infertile women due to causes other than endometriosis or normal women (4). Just a few years later, Badawy et al. also examined the peritoneal fluid (PF) of women with endometriosis and those who were infertile and showed that macrophages and lymphocytes were the dominant cells in their fluid. They also noted that prostaglandins, PGF2α, and PGE2 were also increased in the fluid (5).

In general terms, macrophages are white blood cells in the immune system that digests cellular debris, foreign substances, cancer cells, etc. Their recruitment into the peritoneal cavity (PC) in women with endometriosis might be in response to the retrograde menstruation and presence of the apoptotic ECs. However, macrophages are also known to be pro-inflammatory, which is one of the reasons why investigators were curious to understand the role of these immune cells in the pathogenesis of endometriosis as well as its associated symptoms, pain and infertility. Interestingly, the clue to this came from studies in the cardiovascular field. In 1994, researchers from Japan sought to determine what triggers the macrophage activation in endometriosis patients, as well as what immunologic conditions occur in their PC. They measured the amount of phospholipase A2, cholesterol fractions [high-density lipoprotein (HDL), low-density lipoprotein (LDL), and very low-density lipoprotein (VLDL)], interleukins (IL)-1 and 6, granulocyte-macrophage-colony stimulating factor (GM-CSF), and phosphatidylserine in the PF. When comparing control PF and endo PF, they found no changes in phospholipase A2 but did see an increase in IL-6. They concluded that HDL or LDL may play a role in macrophage activation in women with endometriosis and that the increased IL-6 observed suggests immunological events causing infertility in these women (6).

At the same time, our group consisting of cardiovascular researchers, utilized the research that had already been done in atherosclerosis, where oxidized LDLs are involved in macrophage activation and formation of foam cells, a key event in atherosclerosis (7-9), used this knowledge and examined similar mechanisms in endometriosis (10,11). We found similarities between components present in the PF of women with endometriosis and those present in the atherosclerotic artery, for example increased presence of cytokines, chemokines, and growth factors (12). It is known that through their scavenger receptor(s), SR-A or CD36, macrophages can play an important role in the uptake and clearance of modified proteins (including oxidized LDL) which may be formed due to the inflammatory processes (13). Oxidized LDL is antigenic, pro-inflammatory, alters many cell types, and also induces and releases IL-1 from macrophages (14). These findings prompted us to look for the presence of oxidatively modified lipid-protein complexes in the PF, which might be ligands for macrophage scavenger receptor(s). We found that in the PF of women with endometriosis, there was an increase in lysophosphatidylcholine (a known monocyte and T-lymphocyte chemotactic agent) and oxidized LDL, suggesting an oxidative milieu in the PC of women with endometriosis. LDL isolated from endometriotic PF was also more readily oxidized than those isolated from control PF or plasma of patients with and without endometriosis. Presence of activated macrophages and oxidative stress in the PC resulted in lower levels of the antioxidant, vitamin E in the endo PF than in control PF. These results showed strong evidence for the occurrence of oxidative stress in the PF of women with endometriosis and that the oxidized lipoproteins present in the PF possess properties that suggest their involvement in the pathogenesis of endometriosis (12). It was also noted that monocyte chemotactic protein-1 (MCP-1), a potent monocyte/macrophage chemoattractant and activator, was present at higher levels in the PC of women with endometriosis. Interestingly, mesothelial cells, which are one of the key cells present in the PC and major producers of chemokines, produced more MCP-1 and IL-6 compared to endometrial epithelial and stromal cells. Co-culturing of the mesothelial cells with endometrial epithelial cells increased the production of MCP-1, IL-6 and IL-8 in the PC (15). Interestingly MCP-1 was also induced by oxidized LDL and PF from women with endometriosis (16).

When comparing the immune cells within the PC, it was observed that control women had lesser PF and very few monocyte-like cells. In contrast, there was more PF and more numbers of monocyte-macrophages in the PF of women with endometriosis. It should be noted that macrophages gain scavenger function when adherent (13) and hence it was observed that when PF macrophages from endometriosis patients were made adherent (by plating on tissue culture plates) they were able to take up and degrade oxidatively modified lipoproteins more efficiently than similar macrophages from control women (19,20). This observation suggests that despite the increased inflammatory milieu, the peritoneal macrophages are unable to scavenge due to their non-adherent nature. This lack of scavenger function might be related to the inability of the monocyte/macrophages to adhere to the mesothelial layer of the PC or the inability of the mesothelium to be conducive for macrophage adhesion (Figure 1). This needs to be further investigated. However, it should be noted, that though these macrophages are non-adherent, they still continue to release inflammatory, oxidative and nociceptive mediators and play a role in endometriotic lesion growth as well as in nociception. 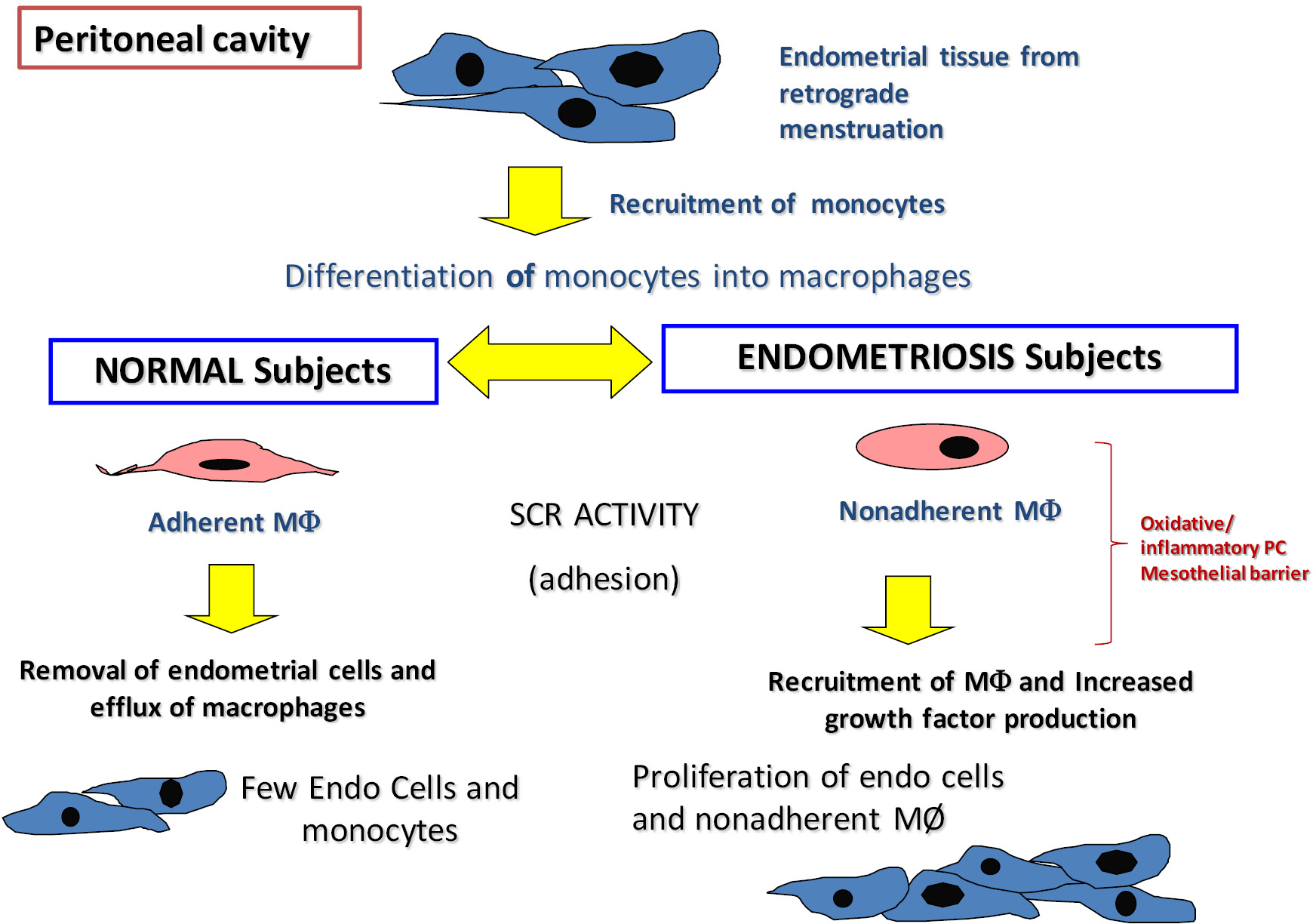 In the recently published study, Forster et al. (21) has added to this knowledge of the role of macrophages in endometriosis and pain. When a mouse model for endometriosis was treated with liposomal clodronate (macrophage depletion) there was a significant depletion of large peritoneal macrophages (LpMs) and transient monocyte-derived macrophages (MDMs) as well as an increase in the number of monocytes. Assessment of pain behavior in the treated vs. non-treated mice showed that in the mice with endometriosis (non-treated mice), had an increase in spontaneous grooming, decreased activity and abdominal retraction, and decreased pain withdrawal thresholds. Once these mice were treated with liposomal clodronate, the levels of grooming declined and reduced the paw withdrawal threshold, but the level of activity was unchanged. They concluded that it appeared that macrophages and macrophage-derived mediators activate these changes in sensory behavior.

In accordance with their previous study showing an induction of Cox2 in the endometrial lesions, spinal cords and brain (22), they observed in the current study that mice with endometriosis had an increased mRNA expression of Cox-2 as well as Tnf-α and that these levels were reduced following macrophage depletion. In order to identify macrophage-derived factors involved in pain, the authors, modelled, endometriosis-associated macrophages (EAMs), using PF from women with endometriosis and pain, and found that the mRNA expression of BDNF and IGF-1 was elevated in the EAMs. An increase in IGF-1 correlated with the levels of pain in these women. Macrophage-derived IGF-1 also enhanced the sprouting of the dorsal root ganglion (DRG) neurons thus increasing nociception. It was concluded that the neurotropic effects seen in the PF and macrophages from women with endometriosis is partially mediated by IGF-1 and by inhibiting IGF-1 in mice using linsitinib, pain behavior such as abdominal retraction and paw withdrawal threshold were higher compared to vehicle treated control mice.

Overall, Forster et al. (21) have shown a major role for peritoneal macrophages in endometriosis-associated hyperalgesia. Their studies further identified that IGF-1 is the key macrophage-derived mediator responsible for hyperalgesia, since inhibition of IGF-1 was able to reduce nerve growth as well as lower the expression of nociceptive genes in vitro. Hence, these authors concluded that macrophages or factors derived from activated macrophages may be good targets for therapy to reduce pain in women with endometriosis.

The question remains of how these new findings by Forster et al. fits in and adds to the knowledge that is already known in the field of endometriosis research. Some of the factors identified by our team in the PC (oxidized lipids, inflammatory mediators) can all be macrophage-derived factors that lead to the findings observed by Forster et al. Our placebo controlled clinical trial of supplementing women with pelvic pain and endometriosis, vitamin E (1,200 IU) and vitamin C (1,000 mg) combination or just placebo daily for 8 weeks before surgery, showed that antioxidant supplementation, improved everyday pain in 43% of patients compared to the placebo group. Dysmenorrhea and dyspareunia were also decreased by 37% and 24% in patients, respectively. There was also a significant decrease in PF inflammatory molecules, such as MCP-1 and IL-6 after antioxidant therapy (23). It would be interesting to explore whether a dual combination therapy of depleting macrophages or inhibiting IGF-1 by linsitinib, along with vitamin E/C would provide more attenuation of the pain that women with endometriosis experience, compared to each of these treatments alone. Also, it would be interesting to investigate if this combination therapy would also decrease the lesions in these women and provide a more tailored treatment for endometriosis. These questions, and potential therapies, are only the tip of the iceberg in questions and things to explore in endometriosis, as many things are yet to be discovered in this elusive disease.