Breast cancer is common in women worldwide. According to 2013 data, one in 18 women developed breast cancer until 79 years, with 1.8 million incident cases of breast cancer and 464,000 deaths globally (1). In Korea between 2001 and 2012, 10-year overall survivals (OS) of stages I, II, III, and IV breast cancer were 92.7%, 84.8%, 63.4%, and 22.2%, respectively (2). In the Netherlands, contemporary groups from 2006 to 2012 had better OS than those from 1999 to 2005 because various effective medicines have been developed (3). Survivorship including breast preservation and quality of life are currently rising issues in the management of breast cancer survivals.

Breast conserving surgery was done in 67% of overall surgical procedures in Korea from 2012 to 2013 (4). However, mastectomy rate has arisen slightly since 2014 because the widespread use of preoperative MRI that can accurately detect tumor extent and genetic tests that can increase prophylactic mastectomy. Breast reconstruction is another option after mastectomy to preserve breast shape. It has been commonly done in early breast cancer or prophylactic mastectomy. However, some cases need unexpected adjuvant radiotherapy and chemotherapy due to discordance between clinical and pathologic stages. Besides, some patients desire breast reconstruction after mastectomy in spite of their advanced stage.

Patient data from two institutions were included in this retrospective study. Patients from January 2007 to December 2014 in one institution and from January 2013 to December 2014 in the other institution reflecting the general implementation of IABR procedure were included. Eligible criteria were: (I) those who were pathologically or clinically [if neoadjuvant chemotherapy (NACT) was done] confirmed intermediate or locally advanced breast cancer (stage II–III of AJCC 7th edition); (II) age ≤70 years; (III) definite surgical resection (R0 or R1 resection) of total mastectomy (TM). Exclusive criteria were: (I) those who had artificial or delayed breast reconstruction; (II) insufficient follow-up information before completion of adjuvant chemotherapy or radiotherapy; (III) previous breast cancer history of carcinoma in situ or invasive carcinoma; (IV) other malignancies except early stage thyroid cancer or squamous skin cancer. Institutional Review Board (IRB) of our hospital approved this study (IRB No. K2018-1002) with an informed consent waiver.

The possibility of IABR was sufficiently explained to patients who needed TM by oncologic and plastic surgeons. After discussing various topics related to the expected effect and sequelae, IABR was performed after patients agreed to receive it. According to pathologic outcomes and molecular findings, adjuvant therapies such as chemotherapy, radiotherapy, hormonal therapy, and target therapy were determined based on boundaries of universal guidelines for breast cancer and national insurance policy of actual treatment period. For some advanced stage cases, NACT was tried before TM.

Personal and clinical information was acquired through medical record review. Because patients with NACT were included in this study, clinical staging of the 7th edition AJCC was applied. Pathologic staging was applied to other patients. Molecular subtype was determined using the 8th edition AJCC guidelines. In cases with two positives for HER-2 receptor in immunohistochemistry tests without in situ hybridization test, the group with histologic grade 3 was referred to as a positive finding while grade 1 or 2 was considered a negative finding.

For primary endpoints of oncologic outcomes, OS and loco-regional recurrence free survival (LRRFS) were calculated and compared between the TM group and the TM + IABR group. As secondary endpoints, disease free survival (DFS) and distant metastases free survival (DMFS) were calculated. Survival observation started on the date of initial biopsy and finished on the date of specific events or the last follow-up. Locoregional event included ipsilateral chest wall and regional lymph nodes. Distant metastases included contralateral breast and regional nodes and metastases to other organs. For cases with adjuvant chemotherapy, the time-to-chemotherapy (TTC) between TM and the first chemotherapy was calculated as another secondary endpoint.

For morbidities of IABR, major complications and minor surgical revisions were reviewed. Complete flap failure or destruction of reconstruction over half was regarded as a major complication while other revisions after 3 months of IABR such as excision of focal fat necrosis, correction of asymmetry, and so on were regarded as minor revisions, including cases of major complications. Abnormal image findings of fat necrosis, seroma, and adhesive mass on CT were sequentially observed at about 6, 18, and 42 months after IABR. In addition, breast height change was observed on CT. Breast height was defined as maximum distance from chest wall to breast skin. Three breast heights of central axis (contralateral nipple level) and 4 cm upper and 4 cm lower axes from central axis were summed. A reduction of 10% during the observation period was regarded as positive finding. 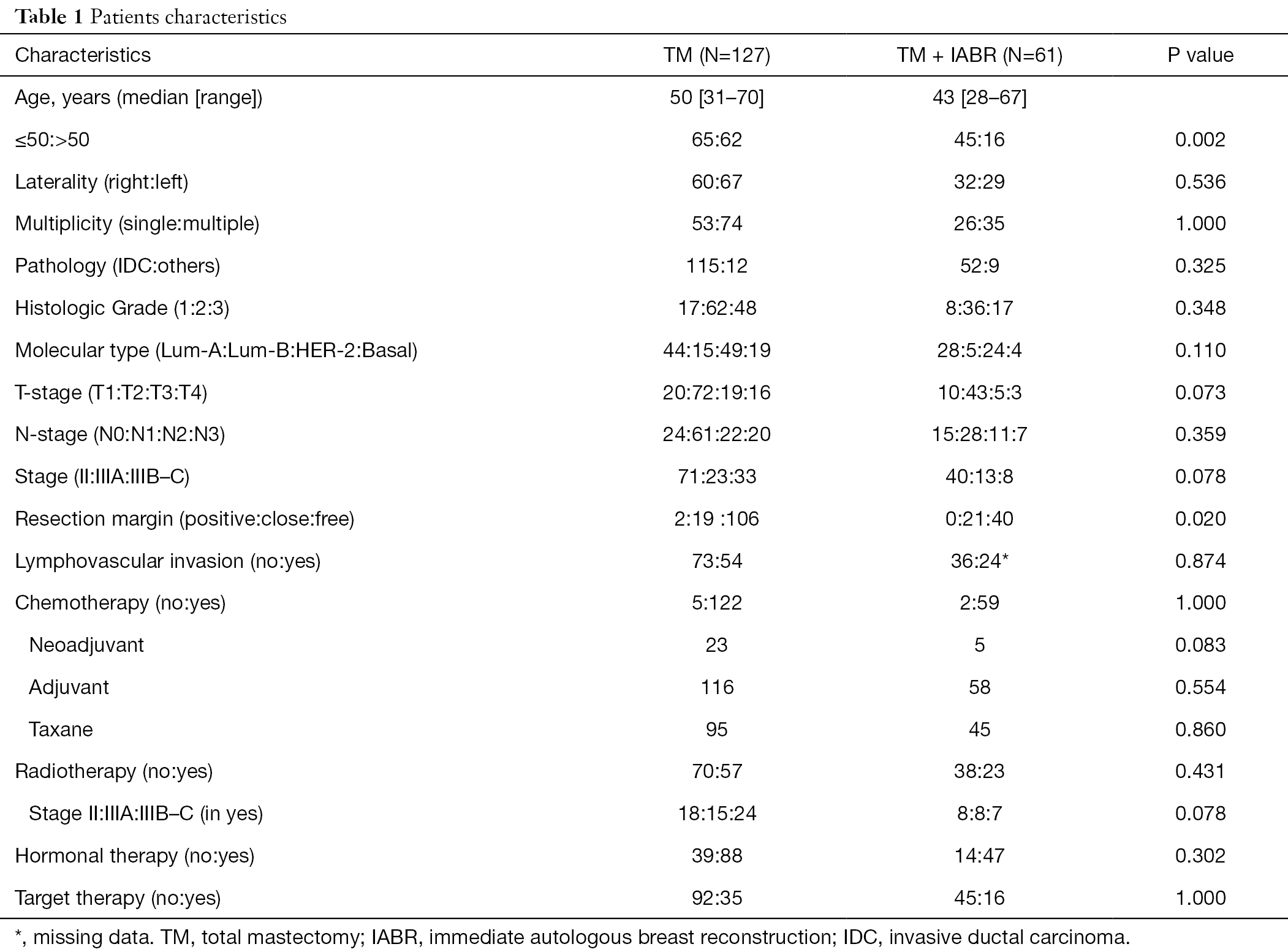 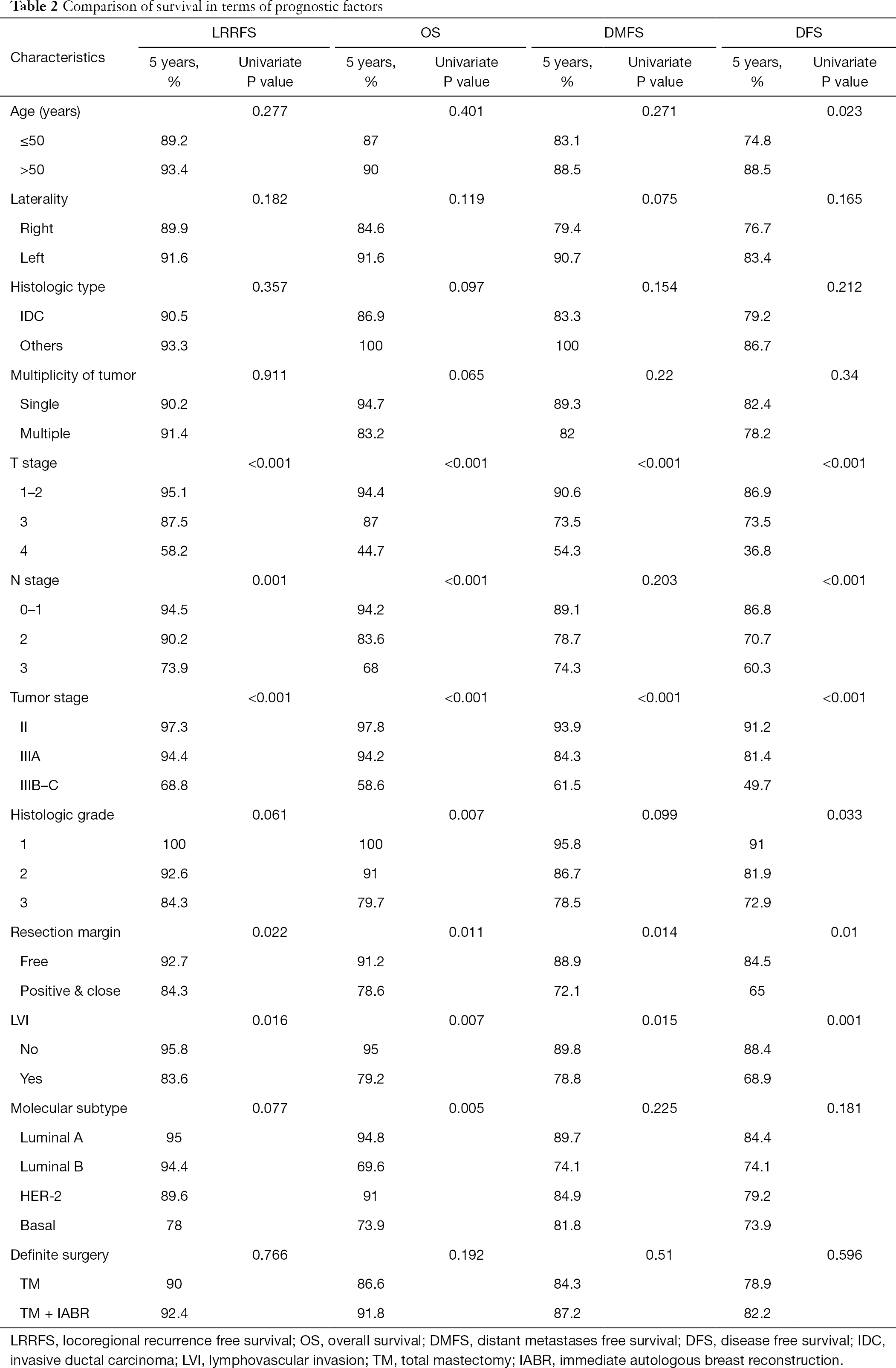 Two major complications were observed. One was immediately after IABR and the other was after five months of PORT due to aggravation of fat necrosis. Minor revisions at three months after IABR, including two major complications after IABR, were done in 49.2% of patients. Radiologic evaluations were possible in 85.2% between 6 and 18 months (early-phase observation) and in 77.1% between 6 and 42 months (middle-phase observation). The reduction of breast height was 21.2% (11/52) and 31.9% (15/47) in early-phase and middle-phase observations, respectively. The volume of abnormal imaging was over 10 cc in 27.3% (15/55) on CT at 6 months after IABR. The volume of abnormal imaging was well regressed, with a mean regression of 38.3% (SE: 5.1%) and 59.3% (SE: 4.1%) in early-phase and middle-phase observations, respectively. Minor revision, reduction of breast height, or volume change of abnormal imaging was not related to therapeutic methods, including PORT or tumor stage (Table 3). 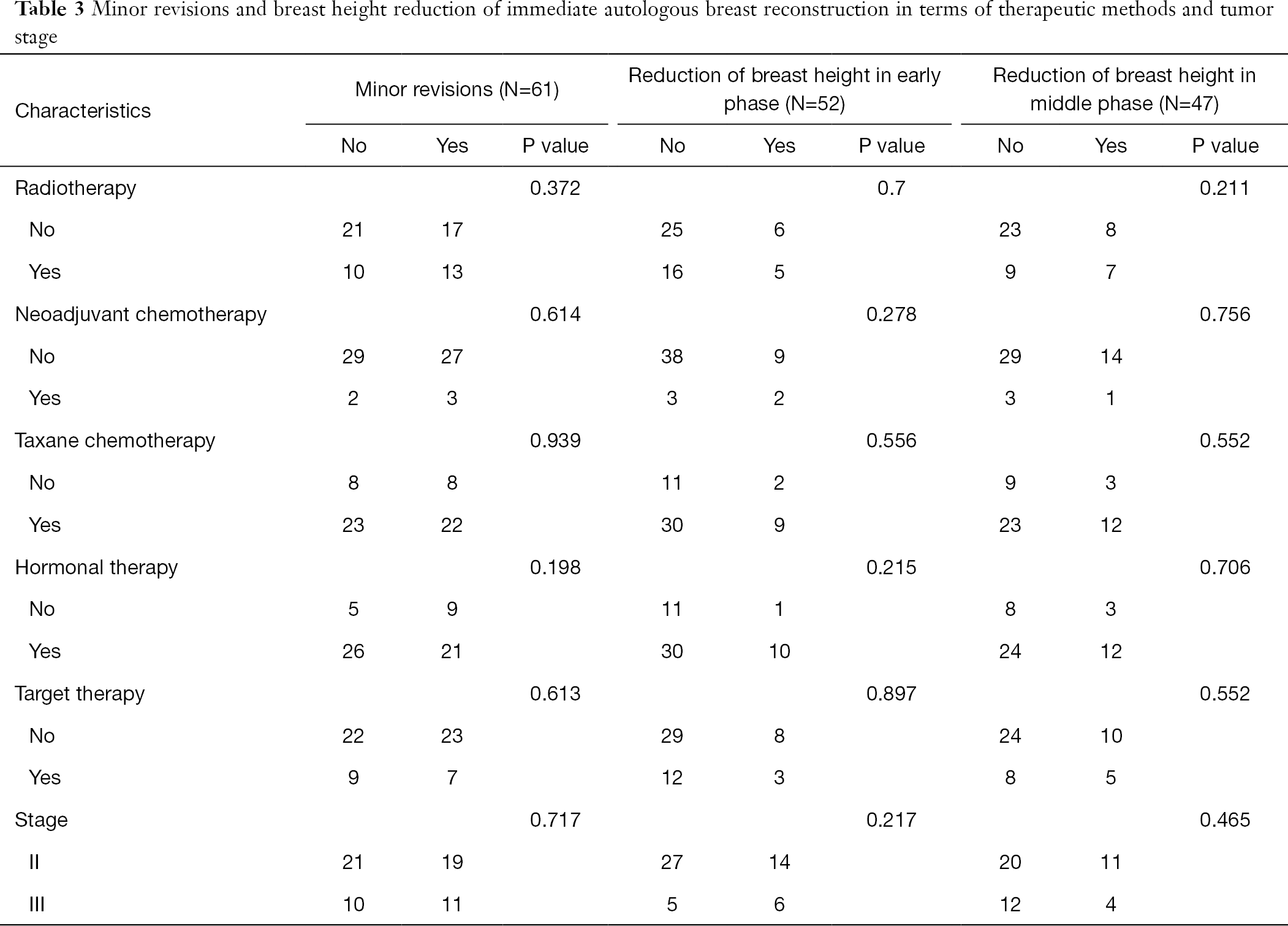 We compared 188 patients receiving TM or TM + IABR in intermediate and locally advanced stage breast cancer. Tumor stage was the most important risk factor in multivariate analyses. For stage II, good oncologic outcomes were presented, with 5-year OS, DFS, and DMFS over 90% and 5-year LRRFS reaching up to 97.3%. While limited survival deteriorations of about 3–10% occurred in stage IIIA, poor oncologic outcomes (68.8% of 5-year OS and 58.6% of 5-year LRRFS) were presented in stage IIIB–C. Although additional IABR after TM did not aggravate oncologic outcomes in stage IIIB–C, the LRRFS rate was high and the possibility of salvage therapeutics after standard therapies could be high in locally advanced stage. This situation could diminish subjective satisfaction of body images after IABR. In a French single institutional study (stage IIIA 28.8%), 10-year OS and DFS after NACT and preoperative radiotherapy were 66.7% and 59.0%, respectively, with a total local recurrence of 2.2% (8). A Japanese long-term observation over 5-year showed that disease recurrence was 4/10 and death by breast cancer was 3/10 in stage III after IABR and PORT (9). Of 22 patients with locally advanced cancer receiving NACT and preoperative radiotherapy with immediate reconstruction in a German report, 2-year OS and 2-year LRRFS were 89.3% and 95.2%, respectively (10). In a Korean single institutional study including 75 cases of stage IIIA among 1000 IABR cases, there were only 3 cases of local recurrence in stage IIIA with insignificant influence of local recurrence on OS (11). There was no statistical difference in OS or LRRFS between TM and immediate breast reconstruction in another Korean case-control study including 6.2% of stage III (12). Our study was unique in that it showed comparison outcomes of OS, DFS, DMFS, and LRRFS for TM + IABR vs. TM according to tumor stage because most reports showed single-group outcomes or focused on local recurrence or surgical methods.

Of our secondary end-point, TTC was delayed in TM + IABR. The National database from the United States of America showed that IABR was a risk factor for a delay of adjuvant chemotherapy (13). A large-scale study has emphasized the delay of adjuvant chemotherapy beyond 8 weeks can negatively affect DFS in a comparison group within 4 weeks in terms of all molecular subtypes except luminal-A type (14). Therefore, it is more important to reduce postoperative complications and recover performance status in advanced stage with IABR.

Regarding reconstruction quality after radiotherapy, several studies have reported that morbidities of fat necrosis and volume loss are increased. Mirzabeigi et al. have reported that fat necrosis and volume loss of IABR are increased by about 5 and 6 times, respectively, after PORT (15). Garvey et al. have reported that PORT can increase fat necrosis after IABR (22.5% vs. 9.2%) without showing difference in overall complication rate (16). Another database study has shown that PORT can increase infection rates beyond 6 months of radiotherapy (17). However, subjective reports by patients after IABR and PORT are not inferior in comparison with non-irradiated or delayed reconstruction groups (18-20). Except for one case of major complication, new lesion or continuous progression of abnormal image finding was not observed in our 23 patients with IABR plus radiotherapy. Volumes of these lesions continuously reduced and remained calcified regardless of radiotherapy or other therapeutic methods. Breast flap contracture was roughly measured by breast height change in our study. It might have progressed with the passage of time. In patients with locally advanced stage, because repeated minor revisions could cause more severe anxiety than early stage and negatively influence subjective oriented assessments, it should be sufficiently explained to patients before IABR.

Most of our patients received chemotherapy, including five patients with NACT in TM + IABR group. Therapeutic methods showed no influence on the quality of reconstruction in our study. Of 247 patients receiving chemotherapy and immediate breast reconstruction, there was no significant difference in infection rate according to chemotherapy timing or reconstruction method in a US study (21). In other small-sized studies, there were no significant differences in complications or wound infections receiving IABR after NACT (22,23). In addition, two studies have analyzed immediate breast reconstruction after NACT and preoperative radiotherapy and found that the morbidity rate is acceptable (24,25).

In our study, all tumor recurrences occurred in the chest wall. It is anticipated that tumor contamination of the central flap is rare. Our previous study suggested a technique to spare the central flap area for reducing breast contracture after PORT (26). Implant reconstruction does not compromise the technique quality of radiotherapy in comparison with TM except cases including internal-mammary lymph node that increase mean and maximum heart doses in the implant reconstruction group (27). A customized bolus was suggested to reduce skin fibrosis, volume loss and contour deformities by minimizing radiation dose to internal-mammary vessels, anastomoses and skin (28).

Although our study was of middle size in scale for IABR and radiotherapy, it had some limitations. First, the follow-up period was not long enough because locoregional recurrences and distant metastases could persistently happen after five years of observation in breast cancer. Therefore, continuous follow-up is needed. Second, measurement methods such as breast height and abnormal volume findings were not absolute or systematic because periodic examination was done for tumor evaluation, not for examining the quality of reconstruction. Last, the sample size of stage III patients was too small to have sufficient statistical power. Therefore, caution should be exercised when interpreting our results. Another systematic review gathering these groups is warranted to clarify their oncologic outcomes.

With a close to five years of follow-up, TM + IABR did not aggravate oncologic outcomes in comparison with TM. PORT did not deteriorate quality of reconstruction regarding the possibility of minor revisions, breast height change, or abnormal image findings. For stage II cancer, IABR could be a feasible option for patients who want to preserve body image. However, it should be kept in mind that absolute oncologic outcomes of advanced stage might not be sufficient as common locoregional recurrences and minor problems could frequently develop after IABR.

Ethical Statement: The authors are accountable for all aspects of the work in ensuring that questions related to the accuracy or integrity of any part of the work are appropriately investigated and resolved. Institutional Review Board of Ansan Hospital approved this study (IRB No. K2018-1002) with an informed consent waiver.