Cardiovascular and cerebrovascular diseases have become the leading cause of death worldwide. Atherosclerosis (AS), a chronic inflammatory disease, is also a common important preclinical pathology of cardiovascular and cerebrovascular diseases. Some studies have shown that memory T cells play an important role in the chronic inflammation in the pathogenesis of AS. It has been reported (1,2) that memory T cell subsets present a sustained immune response in case of AS, and the antigens produced in this period are specific (3-5). A recent multi-ethnic, cross-sectional epidemiological study (6) indicates CD4 memory cells are associated with the extent of subclinical AS.

AMP activated protein kinase (AMPK) is a heterotrimeric protein composed of alpha catalytic subunit and β and γ regulatory subunits. It is widely distributed in the myocardium, fat, skeletal muscle, pancreas and central nervous system. There is evidence showing that AMPK is related to the pathogenesis of a variety of cardiovascular diseases by affecting the proliferation and differentiation of cardiomyocytes, smooth muscle cells and endothelial cells via different pathways. AMPK can bind to AMPK receptor to regulate the functions of T cells. However, whether AMPK can affect the occurrence and development of AS by regulating memory T cells has not been studied, and, if so, the specific mechanism is unclear.

Eight-week-old ApoE-/- male mice (Strain code: BCG-DIS-0002) were housed in the specific pathogen-free (SPF) environment. Animals were divided into 5 groups: AS group, AS + solvent group, AS + Compound C (AMPK inhibitor) group, AS + A-769662 (AMPK agonist) group (n=5 per group). All the mice were allowed to accommodate to the environment for 1 week. Then, the mice in the high-fat diet (HFD) group were fed with high-fat diet [10% lard + 4% milk powder +1.25% cholesterol +0.5% sodium cholate + 84.25% basic diet (wheat, corn, salt, eggs, cypress, trace elements)] for 15 weeks. Animals in the normal control group were fed with normal diet. All the animals were given ad libitum access to water. After 15-week HFD, the aorta was collected and processed for further analysis.

The mouse spleen cells were washed once with ice-cold PBS and then incubated with 50 µL of RIPA lysis buffer. After centrifugation at 3,000 rpm for 2 min, the supernatant was removed, and 50 µL of RIP lysis buffer was added, followed by incubation on ice for 10 min. After centrifugation at 12,000 rpm for 15 min at 4 °C, the supernatant was collected and the protein concentration was determined. Proteins of equal amount were loaded for SDS-PAGE and then transferred onto the nitrocellulose membrane. The membrane was then incubated in 5% non-fat milk solution. After blocking at room temperature for 1.5 h, the membrane was rinsed with TBST and then incubated with primary antibody overnight at 4 °C. After washing in TBST, the membrane was incubated with secondary antibody (anti-rabbit: 1:6,000, anti-mouse: 1:5,000) for 90 min at room temperature. After washing in TBST thrice (5 min for each), visualization was done with chemiluminescence. Protein bands were scanned, and the optical density was analyzed.

The aorta was collected from the aortic arch of the abdominal aorta (at the level of renal artery), and the surrounding adipose tissues were removed. The aorta was cut longitudinally and fixed in 4% paraformaldehyde overnight. The aortic tissues were then subjected to oil red O staining for 10 min at room temperature. The remaining tissues were embedded in the paraffin, and then sectioned. After deparaffinization, sections were dehydrated and stained with hematoxylin for 8–10 s and then with eosin for 2–3 s. After dehydration, sections were mounted with neutral gum.

This study was approved by the Institutional Ethics Committee of the Third Xiangya Hospital of Central South University (No: 2015-S175).

Statistical analysis was performed with SPSS version 19.0 and data are expressed as mean ± standard deviation (SD). After testing the homogeneity of the variance, data were compared with t-test between two groups or one-way analysis of variance (ANOVA) among groups followed by Student-Newman-Keuls test between groups. A value of P<0.05 was considered statistically significant.

Blood lipids, blood glucose and ox-LDL in each group

The total cholesterol, low-density lipoprotein, high-density lipoprotein, triglyceride, blood glucose and ox-LDL of the HFD treated mice were significantly higher than in the mice fed with normal diet (P<0.05) (Table 1). The LDL-C and triglyceride in the AS + Compound C group were significantly lower than in the AS + A-769662 group (P<0.05) (Table 1). This suggests that AMPK can may affect the lipid metabolism.

No red plaques were observed in the aorta of normal control group. However, the red plaques were obvious in the aorta of HFD treated mice, and the plaque was larger near the aortic arch and the abdominal aorta (tail). In addition, the area of plaques in the AS group and AS + solvent group was larger than in the AS + Compound C group and the AS + A-769662 group (Figure 1). This is suggested that both AMPK agonist and AMPK inhibitor can improve the AS.

Figure 1 Oil red O staining of the aorta. There were obvious red plaques in the aorta of HFD treated mice, and the plaque was larger near the aortic arch and the abdominal aorta (tail). (A) Normal control group; (B) AS group; (C) AS + Compound C group; (D) AS + A-769662 group; (E) AS + solvent group. AS, atherosclerosis; HFD, high-fat diet.

HE staining of the aorta

HE staining showed the mucosal degeneration and edema of the vascular wall in the HFD treated mice, and typical atherosclerotic plaque was noted in the vascular wall. The lipid cores were thicker in the AS model group and the AS + solvent group, and foamed lipids were evident. The lipid cores in the AS + Compound C group and the AS + A-769662 group were significantly improved as compared to the AS group and AS + solvent group (Figure 2). This is suggested both AMPK agonist and AMPK inhibitor can improve AS. 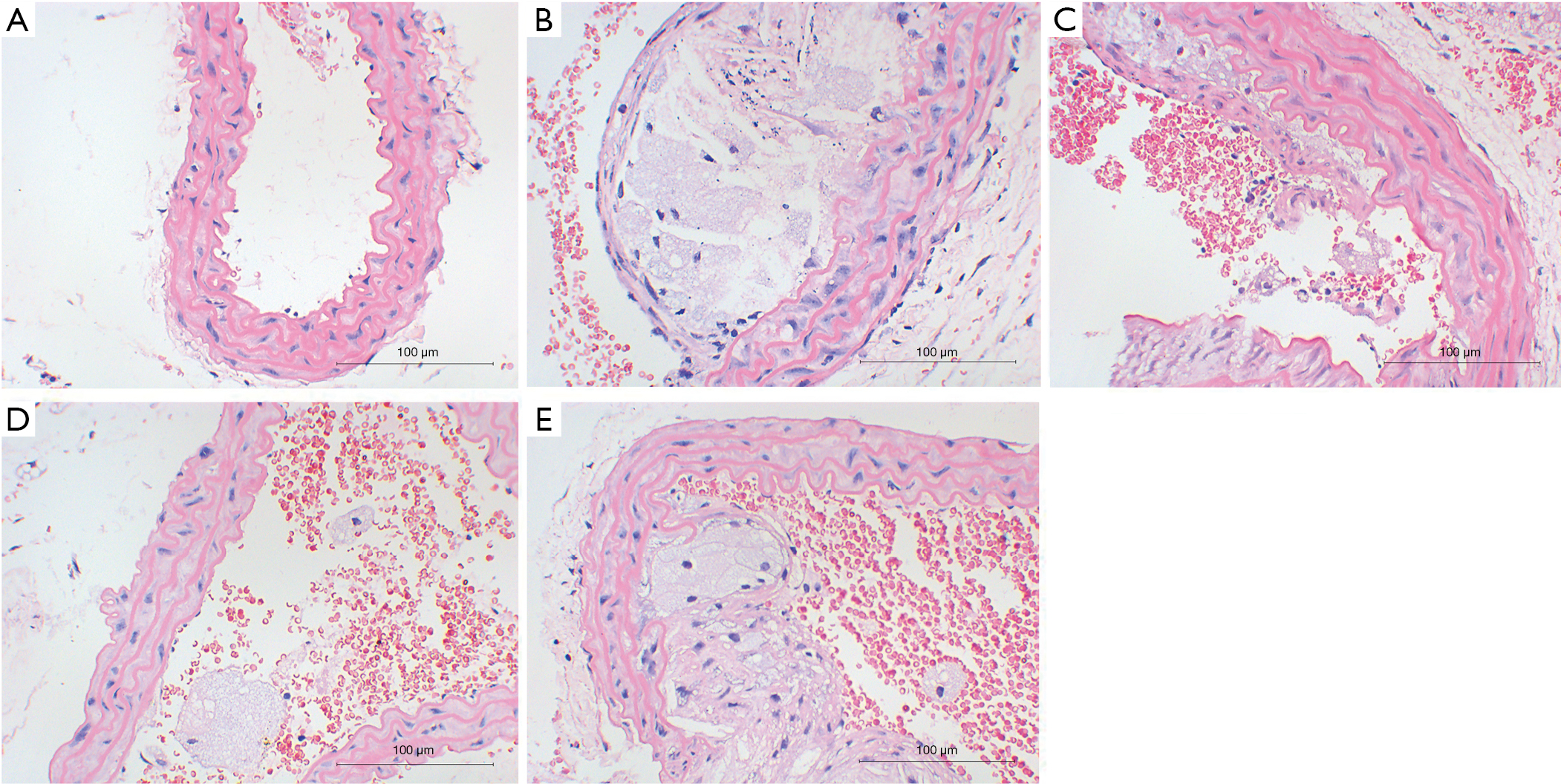 Figure 2 HE staining of the aorta in different groups. Both AMPK agonist and AMPK inhibitor improved AS. (A) Normal control group; (B) AS group; (C) AS + Compound C group; (D) AS + A-769662 group; (E) AS + solvent group. AS, atherosclerosis.

Flow cytometry showed that the proliferation rate of CD4+CD44+ memory T cells in the normal control group was low (1.38%±1.42%). The proportion of CD4+CD44+ cells in the spleen of HFD treated mice was significantly higher than in the normal control group (P<0.05). Both the AS + Compound C group and the AS + A-769662 group had significantly reduced proportion of CD4+CD44+ lymphocytes in the spleen as compared to the AS group and AS + solvent group (P<0.05) (Table 2, Figure 3). This is suggested that AMPK may affect the proliferation rate of memory T cells, which is more pronounced after AMPK inhibitor (Compound C) treatment. 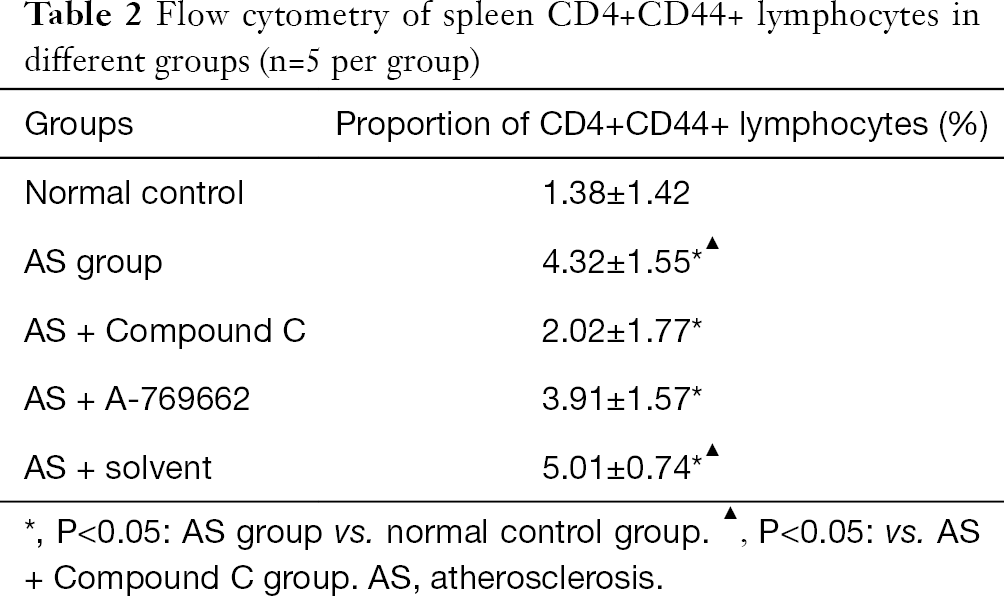 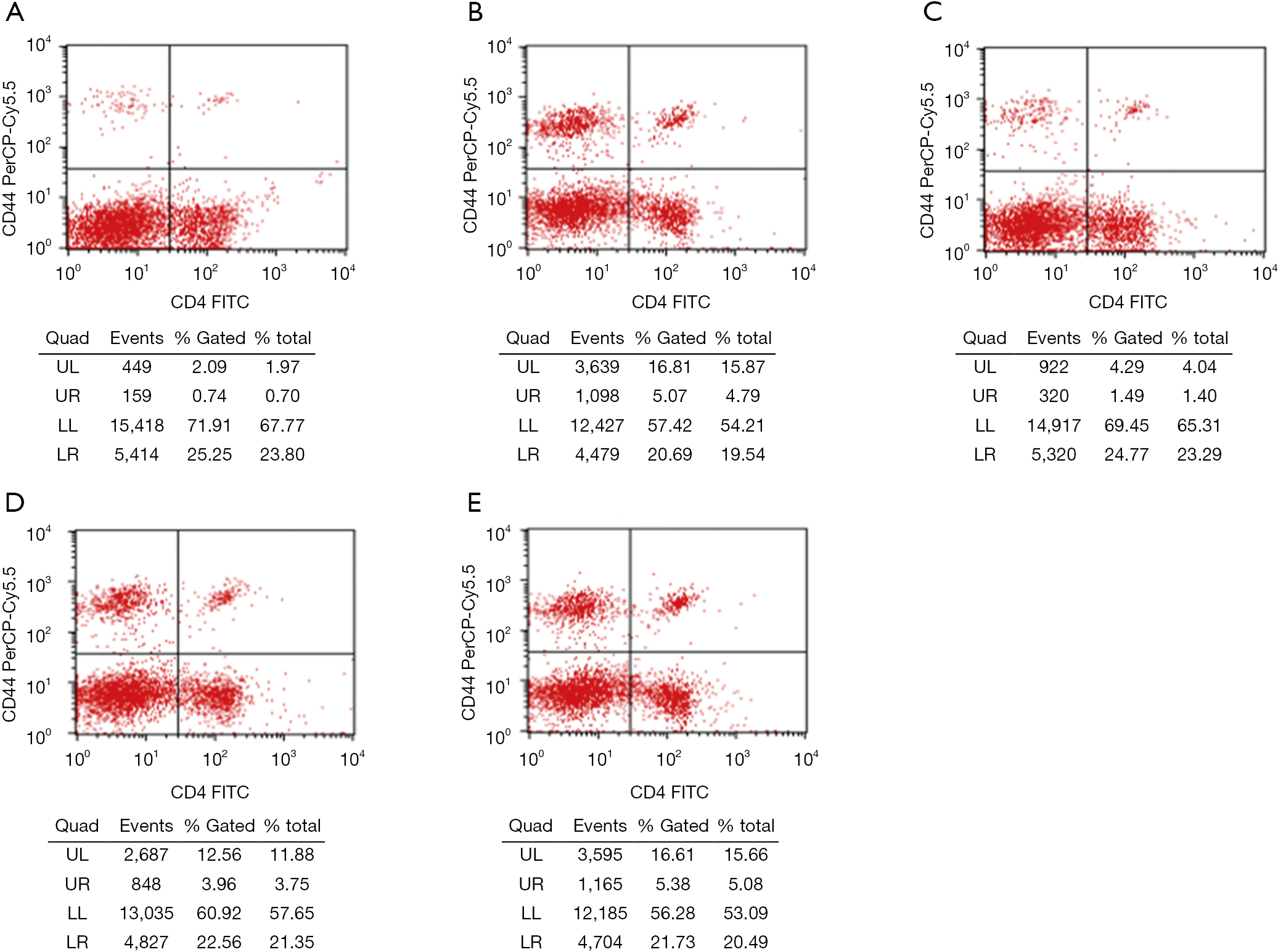 Detection of AMPK expression in the spleen 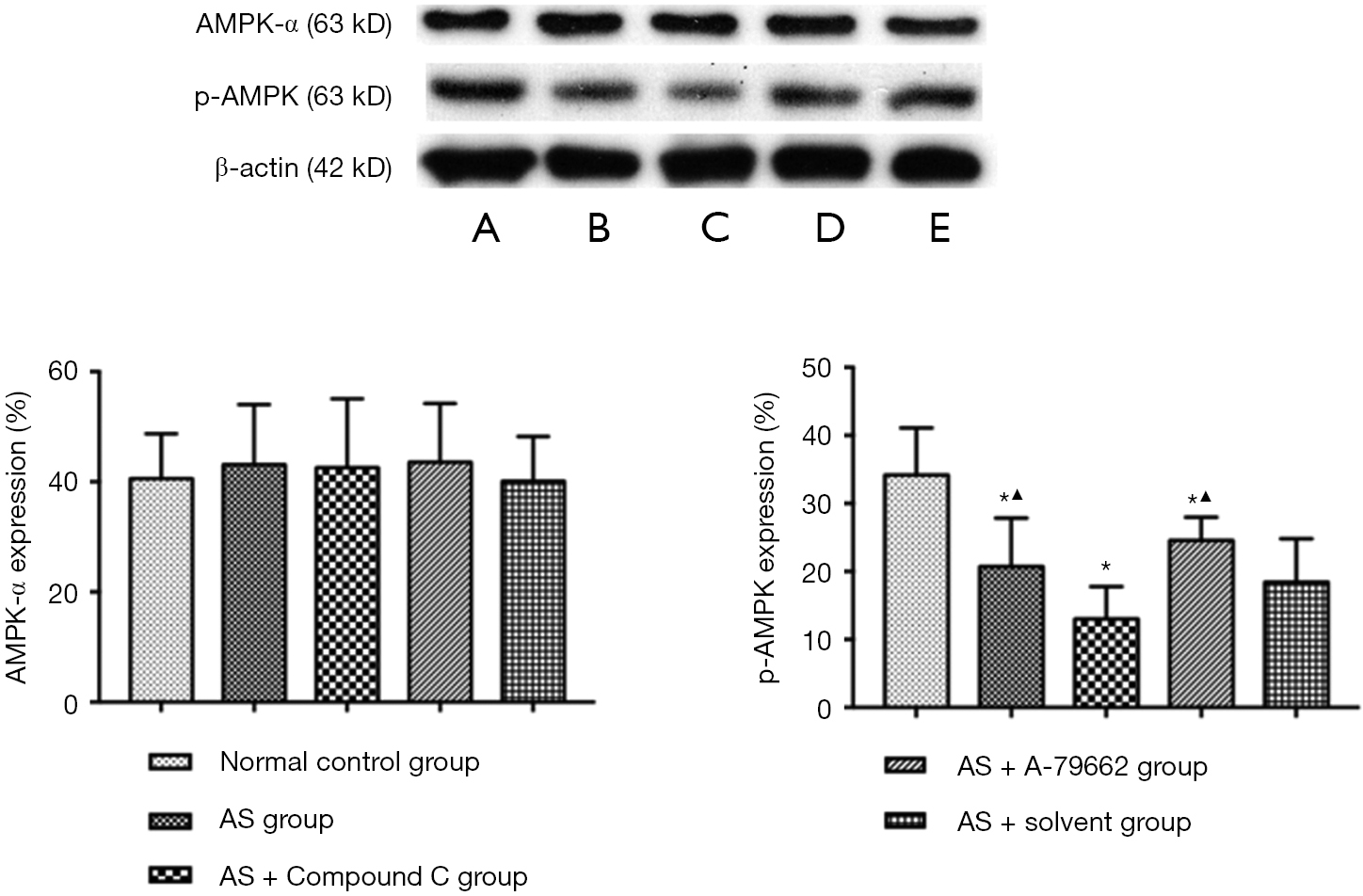 Detection of mTOR expression in the spleen 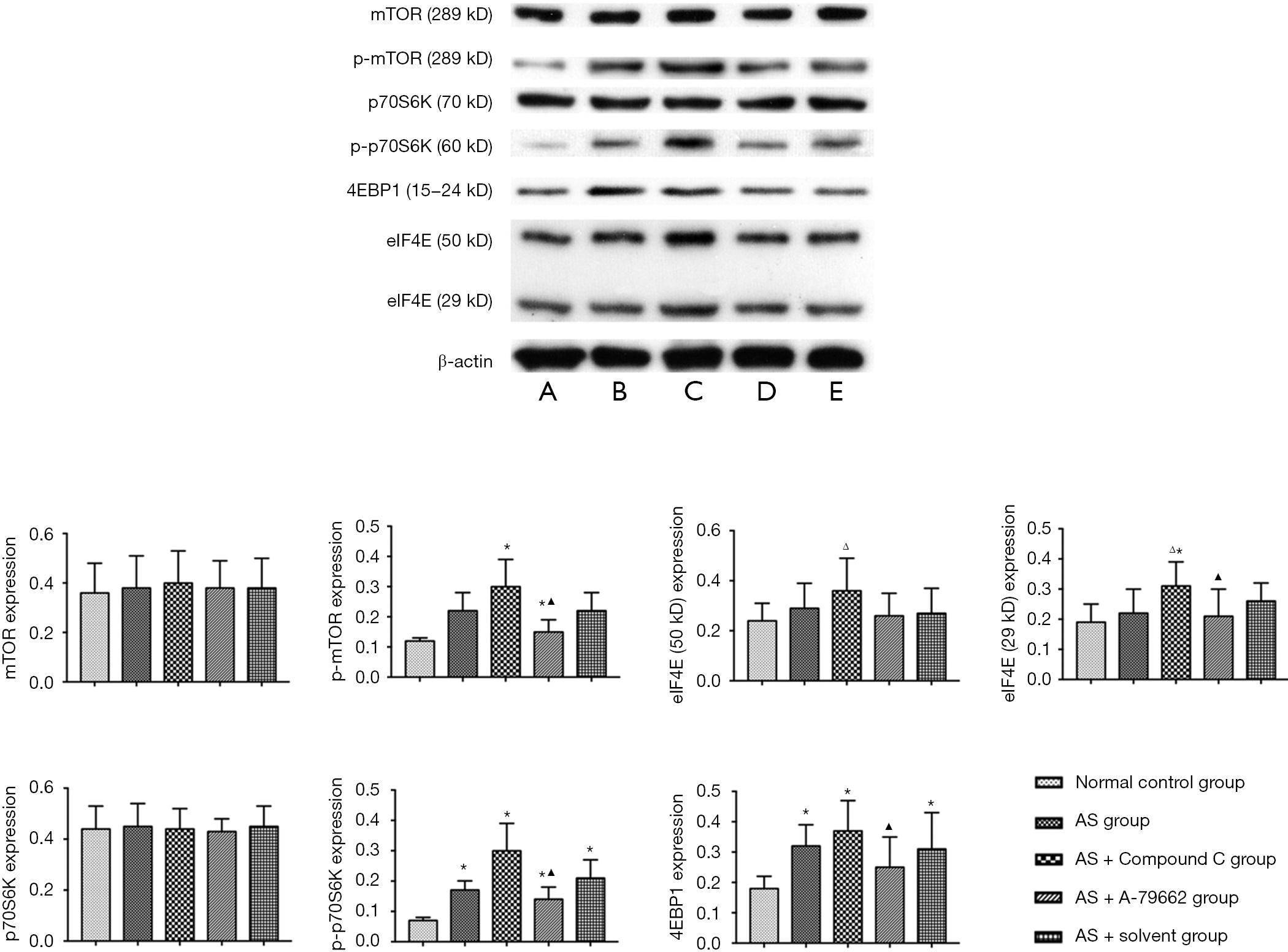 T lymphocytes play a key role in the immune process during the initiation of AS (11-13). Animal studies have shown that inhibition of chemokine receptors such as CRR5H and CXCR3 (14,15) on the T cells in the atherosclerotic plaques can attenuate the progression of AS. The CD4+ memory T lymphocytes and CD8 +memory T lymphocytes have been identified in patients with and without coronary heart disease and there is significant difference in the number of CD4+ memory T cells between them although the number of CD8+ memory T cells is comparable (16-18). There was significant difference in the proportion of CD4+ lymphocytes, but there was no difference in the proportion of CD8+ memory T lymphocytes. This suggests CD4+ memory T lymphocytes play a more critical role in the development of AS. In AS, antigens formed in the hyperlipidemia environment (19) may affect or stimulate the central memory T cells and effector memory cells. The immune memory is an integral part of adaptive immunity to ensure long-lasting protection against previously encountered pathogens. The advantage of immune memory is that it can quickly and strongly initiate an immune response when the body faces the similar antigen in the future. The pathogenesis of AS is considered to be related to the immune mediated inflammatory response, and immune memory is closely associated with the occurrence and development of AS.

AMPK has been identified as a potential new therapeutic target for cardiovascular disorders (20-22). In addition, AMPK possesses the capability to regulate T cells and is involved in the anti-inflammatory immune responses (23). AMPK is mainly present in two active molecules: AMPK-α and p-AMPK. In the present study, results showed AMPK activity changed significantly in AS mice. The p-AMPK expression was down-regulated, while the AMPK-α expression remained unchanged. This suggests that p-AMPK is more sensitive than AMPK-α in reflecting the AMPK activity. The p-AMPK expression was further down-regulated after Compound C treatment in the HFD treated mice, while the AMPK-α expression still remained stable. However, the p-AMPK expression increased significantly after A-769662 treatment in the HFD treated mice, but the AMPK-α expression maintained stable. These findings indicate p-AMPK is superior to AMPKα in reflecting AMPK activity in case of HFD treatment.

AS is a chronic inflammation and ox-LDL persists in the development of AS. T cells may produce immunological memory after initial contact with ox-LDL. This immune memory may promote or inhibit the development of AS, but this hypothesis is needed to be further confirmed. The production of CD4+CD44+ memory T cells may be a double-edged sword for AS. With the continuous increase in the CD4+CD44+ T cells, the AS is not improved significantly; with the reduction in the CD4+CD44+ T cells, the improvement of AS is also compromised; the moderate proportion of CD4+CD44+ T cells is protective on AS. From the perspective of immunology: memory T cells increase after the activation, proliferation and differentiation of naïve T lymphocytes following exposure to the immunogen. When exposed to the same immunogen again, memory T cells will quickly trigger an immune response to clear the immunogen, exerting protective effects. When the immunogen persists, the immune response will be too long or too strong, which may lead to the hypersensitive reaction, causing damage to the body. Therefore, it is possible that memory T cells play a dual role.

The differentiation of T cells is dependent on the microenvironment. After T cell activation, mitochondrial metabolism is required to maintain the energy need and the survival of T cells. During this period, the survival of T cells is regulated by AMPK as an energy receptor. Available studies have indicated that AMPK acts as a “metabolic shield” in a poor environment. Thus, AMPK may ensure cell viability when there is nutrient deficiency (e.g., tumor microenvironment: hypoxia and glucose deficiency) (23-26).

This may be explained that, in the HFD environment, cells are excessively oxidized, the p-AMPK expression is down-regulated, and the proportion of T cells differentiating into CD4+CD44+ memory T cells increases. AMPK has the capability to alter the differentiation of T cells in an unfavorable environment. After Compound C treatment, p-AMPK expression significantly decreased, while p-mTOR expression increased, and the expression of p-p70S6K, 4EBP1, and eIF4E significantly enhanced, thereby markedly inhibiting the formation of CD4+CD44+ T cells. A-769662 up-regulated the p-AMPK expression and down-regulated the expression of p-mTOR, p-p70S6K, 4EBP1, and eIF4E. However, in the complex in vivo environment, AMPK pathway fails to further promote the formation of memory T cells, but reduces memory T cells in the presence of high risk for AS, which alleviates the immune inflammatory response, exerting protective effects. Because Compound C is able to reversibly inhibit AMPK inhibitor, AMPK inhibitor regulates the expression of mTOR downstream proteins in memory T cells, which is different between in vivo environment and in vitro environment. This might be explained as that AMPK is a reversible inhibitor of compound C and can inhibit several enzymes, which may affect different downstream pathways.

Ethical Statement: The authors are accountable for all aspects of the work in ensuring that questions related to the accuracy or integrity of any part of the work are appropriately investigated and resolved. This study was approved by the Institutional Ethics Committee of the Third Xiangya Hospital of Central South University (No: 2015-S175).