Pancreatic cancer is a highly aggressive tumor with a poor prognosis (1). Its mortality almost equals incidence and the 5-year survival rate is only 6% (2). The low survival rate is due to the late presentation of symptoms, which often results in a delayed diagnosis. A majority of patients will already have advanced disease or metastasis before conclusive diagnosis (3). Therefore, early and accurate diagnosis is vital for improving prognosis and intervention.

The advent of endoscopic ultrasonography (EUS) and EUS-guided fine needle aspiration (EUS-FNA) has provided an important diagnostic method for various visceral malignancies, especially pancreatic lesions (4-6). EUS-FNA can provide real-time and direct visualization of structures within or outside the gastrointestinal lumen and can obtain an adequate sample, which is critical for precise diagnosis and management (2,7). A recent meta-analysis of randomized controlled trials revealed that the sensitivity of EUS-FNA is about 85–93% (8-10). However, the diagnostic yield of EUS-FNA can be affected by various factors, e.g., lesion’s size and location. The lesion’s size was reported to be an independent factor affecting diagnostic accuracy, which is higher for larger lesions (11,12). When considering the location, it was reported to be difficult to operate EUS-FNA in the pancreatic head (10). Lesions within the pancreatic head were generally aspirated via a transduodenal approach, which might be difficult in some cases of pyloric obstruction and duodenal bulb ulceration (2,10).

Recently, vascular access has become an interesting application for EUS based interventions (13). In 2006, Vincent et al. firstly successfully performed transvascular biopsy of left hilar mass via traversing a branch of the pulmonary artery (14). No serious complications were observed during their study (14). The ensuing researches further confirmed the feasibility and safety of the EUS-guided transvascular approach. The sensitivity and specificity was 64% to 75% and 100% respectively (15-17). Potential complications of transvascular biopsy include significant bleeding, hematoma, embolization and tumor dissemination. All these complications are quite infrequent (17). However, the majority of related studies before was retrospective with limited sample size. Considering this, a multicentre prospective study is needed. As for now, transvascular biopsy should be performed by experienced endoscopists in carefully selected patients (17). Similarly, portal vein (PV) as a vital abdominal vasculature has been regarded as a potential approach. Emerging reports have focused on the utility of EUS-guided PV for diagnosis and therapy, like EUS-guided PV sampling for hepatocellular carcinoma (HCC) and EUS-guided PV embolization (13,18,19). Nevertheless, few studies focused on EUS-guided PV biopsy of pancreatic lesions. In our experience, it was found that the pancreatic head and uncinate process could be visualized well during transgatric EUS scanning. Thus, the aim of this study is to evaluate the feasibility and effectiveness of EUS-guided transgastric trans-portal system FNA of pancreatic head and uncinate process mass when transduodenal approach is not applicable.

This is a multicenter retrospective study in tertiary-care hospitals. The study was approved by the Ethics Committee of the Second Affiliated Hospital of Nanjing Medical University ([2019]KY No.108).

A total of 26 patients with pancreatic head or uncinate process mass were enrolled in this study. They were referred to our institutions between December 2013 and December 2018 and were suspected of pancreatic head or uncinate process malignancy. Based on the examination of available gastroscopy, computed tomography (CT) and magnetic resonance imaging (MRI), it was found that transgastic biopsy of the pancreatic mass performed via the portal vein (PV) or superior mesenteric vein (SMV) was the only option to obtain diagnostic specimens. All patients signed the informed consent. The following exclusion criteria were used: (I) patients younger than 18 years old; (II) patients could not tolerate anaesthesia; (III) patients refused to sign informed consent; (IV) patients with coagulopathy; (V) patients were taking anticoagulant/antiplatelet drugs that could not be suspended; (VI) pregnant patients.

EUS-FNA procedure was conducted using a PENTAX EG3870UTK ultrasound endoscope (PENTAX, Tokyo, Japan). During the procedure, patients were in left lateral decubitus position under moderate sedation with midazolam and Fentanyl. All EUS-FNA procedures were performed by experienced endosonographers. When there were no suspicious lesions except mass observed in the pancreatic head or uncinate process, EUS was applied to distinguish the pancreatic mass from the PV. After assessment, a simple 22-gauge needle (type Cook, Germany) was introduced through transgastric trans-PV or trans-SMV route to puncture the mass. Vacuum suction was applied as soon as the tip of the needle reached the target lesion to obtain the tissue specimens. At the end of the procedure, the needle was retracted and the para-PV area was observed for 2–3 minutes to assess the immediate procedure-related complications (Figure 1). The aspirates were fixed on glass slides along with fixative for cell block evaluation. After that, an experienced cytopathologist evaluated the representativity of the aspirates with on-site cytology. Patients were recovered in the recovery room of the endoscopy unit after operation. Hemoglobin was assessed on postoperative day 1. No routine abdominal ultrasound or CT was done unless related symptoms occurred. 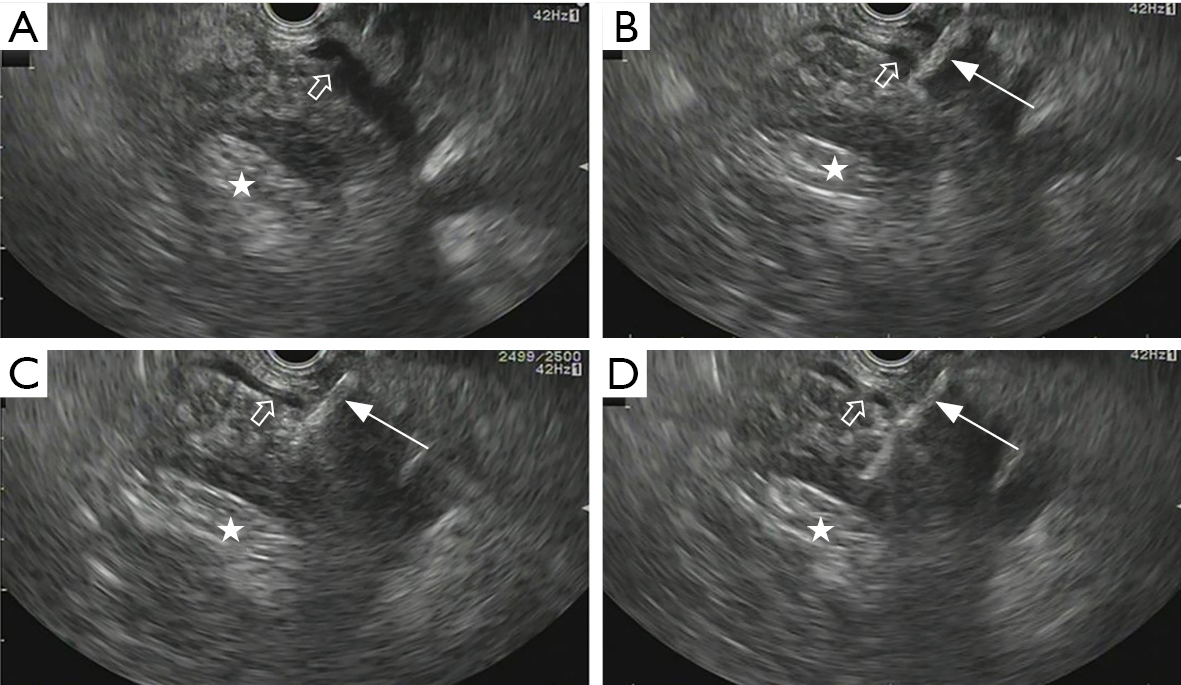 Figure 1 Process of EUS-guided transgastric trans-portal system FNA. (A) EUS image of a mass (star) located in the pancreatic head. (B,C,D) Endoscopic ultrasound view of pancreatic mass with needle (arrow head) passing through the superior mesenteric vein (arrow) and into the mass.

An experienced cytopathologist was available on-site for preliminary interpretations of all FNA procedures. Aspirated specimens were expressed onto glass slides and smear preparation was made in two methods. Some slides were air-dried and stained with a Qiu stain for rapid on-site interpretation while other slides were alcohol-fixed. EUS-FNA was repeated for another time if the previous diagnosis is not definitive. Within several days after EUS examination, a final cytological diagnosis was rendered.

The main outcomes were diagnostic performance, including true positive, true negative, accuracy, sensitivity and specificity. The secondary outcomes were complications. Procedure-related complications including bleeding, embolization and acute pancreatitis were confirmed via clinical observations, including chief complaint, hemoglobin, amylase and lipase tests. Massive bleeding was defined as a decrease in hemoglobin (more than 2 g/dL compared with pre-procedure levels). Obvious epigastric pain associated with the significant increase of serum amylase or lipase was regarded as acute pancreatitis. Abdominal ultrasound and CT were performed when patients appeared obvious abdominal pain, fever or vomiting.

The main characteristics of the patients are summarized in Table 1. Among 26 patients, 8 patients had duodenal ulcer, 6 patients had pyloric obstruction, 2 patients had biliary stent which made FNA difficult to perform, and 10 patients had duodenal stricture which made the transduodenal approach quite challenging. The mean age was 62.1 years old and 69.2% of patients were male. Seventy-six point nine percent of lesions were located in the pancreatic head and the mean size was 36±12.3 mm.

A positive cytological diagnosis for malignancy was confirmed in 22 patients, while the remaining 4 patients were negative. All these 4 negative patients underwent surgeries. Pancreatic ductal hyperplasia was postoperatively detected in 2 patients and adenocarcinoma cells were found in other 2 patients. The diagnostic accuracy, sensitivity and specificity were 92.3%, 91.7% and 100% respectively. The NPV and PPV were 50% and 100% respectively (Table 2). 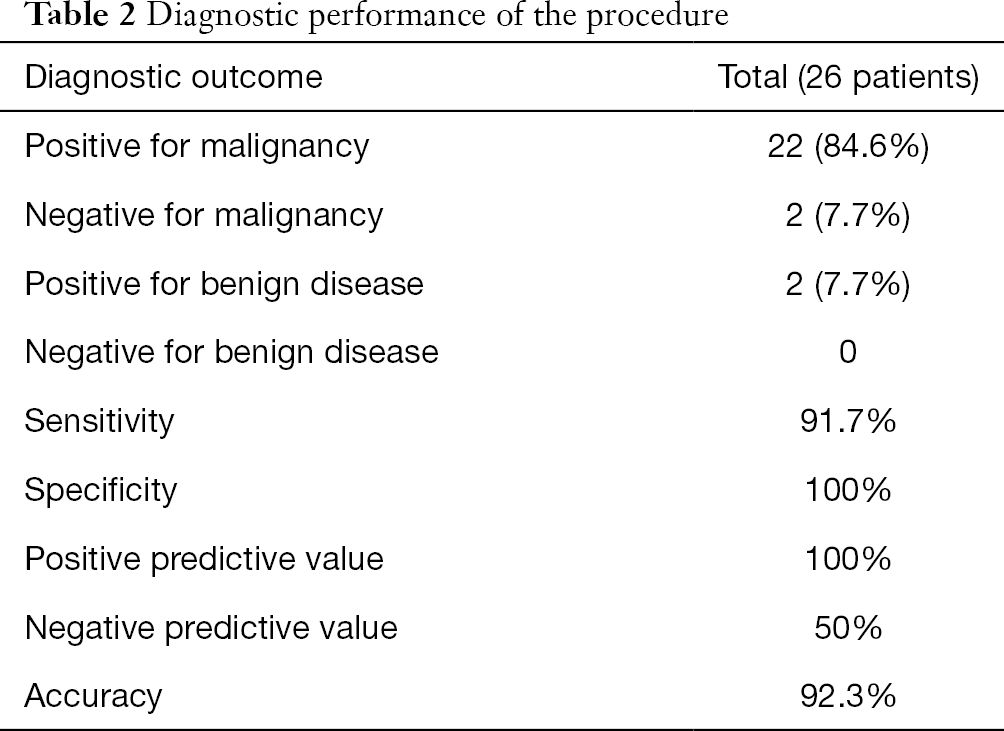 Since the first report by Vilmann et al. in 1992, EUS-FNA has been significantly developed and gradually considered as a standard procedure for pancreatic masses diagnosis (20,21). Pathological evidence has demonstrated EUS-FNA has higher diagnostic accuracy for pancreatic masses compared with CT or MRI (22). It has also been reported that EUS-FNA has an overall sensitivity of approximately 75% to 98%, specificity of 71% to 100%, and accuracy of 79% to 98% for pancreatic masses diagnosis (23). Generally, EUS-FNA uses the transgastric route to access the lesions in pancreatic body or tail, while transduodenal route is used for lesions in pancreatic head or uncinated process. However, the transduodenal tissue-acquisition modality is not applicable in cases of pyloric obstruction or duodenal bulb ulceration.

Transvascular biopsy has become an emerging application for EUS-based interventions.

Despite vascular puncture should be avoided, vessels are occasionally penetrated inadvertently during conventional EUS-FNA. The massive bleeding after EUS-FNA of pancreatic lesions that located adjacent to or invade the PV is less than 0.5% (15,24). Here, we perform EUS-FNA to diagnose pancreatic lesions via traversed portal system deliberately. Our study demonstrated that EUS-guided transgastric trans-portal system FNA is feasible and useful for selected patients with pancreatic mass. All EUS-guided transgastric trans-portal system FNA procedures were successfully performed and adequate aspirates were obtained in all subjects. The NPV was 50% in our study, which is higher compared with the results of other studies (25). This might be due to the small samples and the highly selective patients. The diagnostic accuracy was 92.3%, which was similar to the results in the previous study that accessed pancreatic masses by EUS-FNA (21). Hence, EUS-guided transgastric trans-portal system FNA might be a salvage technique for selected patients.

The adverse events of EUS-FNA included pancreatitis, haemorrhage, perforation, infection and tumor seeding (26). The overall complication rate was about 0.3% to 2.2% (23). Although this study firstly reported EUS-guided transgastric trans-portal system FNA for the diagnosis of pancreatic lesions, the procedure of puncturing through PV is not a novel method. In the 1990s, there was numerous literature about the utility and safety of transabdominal ultrasound (TA-US) guided vascular access of the PV for diagnosing suspected HCC thrombus (21,27,28). After these initial publications, the first case report of EUS-guided FNA of the PV for diagnosis of HCC was published in 2004 (29). Since then it has been further explored and its technical feasibility, efficacy and safety have been demonstrated in multiple animal and human studies, such as EUS-guided angiography, PV catheterization and pressure measurement (30-33). Potential complications including massive bleeding, hematoma, thrombosis and tumor dissemination are quite rare (13). Similarly, no such obvious complications were observed in our study. It benefited from the few attempts by experienced endoscopists in operations, which was helpful to decrease these related complications. Hematoma is a relatively common transaortic biopsy complication (15), but was not observed in our study. It might arise from lower portal pressure than aortic pressure.

Nevertheless, this study has some limitations. First of all, the population bias could not be excluded even though this study was conducted in multicenter. Second, the sample size is reasonable small since pancreatic head and uncinate process mass complicated with duodenal lesions is considerable rare. Third, it was a retrospective study. Finally, we considered all biopsy sample positive for malignancy as true positive due to not all patients had surgical pathology of the resected specimen. Therefore, further randomized controlled trial in a multicenter setting is needed in the future to confirm our results.

Our study revealed that EUS-guided transgastric trans-portal system FNA is a novel, feasible and probable safe technique for diagnosing pancreatic lesions. Prospective randomized trials are warranted to further confirm the results of our study.

Ethical Statement: The authors are accountable for all aspects of the work in ensuring that questions related to the accuracy or integrity of any part of the work are appropriately investigated and resolved. The study was approved by the Ethics Committee of the Second Affiliated Hospital of Nanjing Medical University ([2019]KY No.108), and written informed consent was obtained from the parents of each patient.