Gallbladder polyp (GP) is diagnosed based on the presence of soft tissue mass within the gallbladder wall, and ultrasonography has over 90% of sensitivity and specificity in ascertaining the diagnosis of GP (1-3). GPs are classified into true polyps and pseudopolyps; the former include adenomas and adenocarcinomas, and the latter mainly include cholesterol polyps and inflammatory polyps. About 70% of GPs are cholesterol polyps, and the prevalence of true GPs is only approximately 4–7%. Most GPs are clinically diagnosed based on ultrasonography and only few undergo surgery to have histopathological confirmation. Most studies of GPs have focused on the prevalence or the associated risk factors; nevertheless, the clinicians are mainly concerned about the indication for surgery although the malignant potential of GP is quite low (4-6).

The prevalence of GPs for Chinese is approximately 6.9–9.5%, which is greater than that for Danish and Japanese populations (5-9). The pathophysiological mechanisms for gallbladder stones and GPs are different. The reported risk factors for gallbladder stones include aging, sex (female), race, a family history of gallbladder stones, obesity, diabetes, and hypertriglyceridemia (10-12). In the contrast, GPs are generally suggested to be related to sex (male), glucose intolerance, obesity, or metabolic syndrome. Moreover, it remains debated about the role of chronic hepatitis B virus (HBV) infection as the risk factor for GPs (5-9,13-17). The variation of race, diet, and environmental characteristics may contribute to the inconsistent conclusions about the risk factors for GPs. The association between metabolic disorders and GPs might portend the association of GP with cardiovascular disease (5,13,16,17). However, most GP literature focuses on cross-sectional associations and cohort studies are therefore needed, although our former cohort study has evidenced the close association of GP with stroke (18).

Coronary heart disease (CHD) constitutes a considerable global public health burden, thus it is critical to identify its associated risk factors for the prevention of this potentially fatal disease. The contribution of metabolic syndrome to the development CHD has been consistently documented in Western and Eastern areas (19-23). Furthermore, the reported prevalence of CHD has also increased in Asia-Pacific areas, including Taiwan, due to the increasing prevalence of sedentary lifestyles, unhealthy dietary habits, and metabolic disorders (19).

With the wide application of ultrasonography, the reported prevalence of GP may increase. Since GPs and CHD share several common risk factors, it is warranted to assess the association between CHD and GP for the prevention of CHD. We conducted a nationwide population-based cohort study by analyzing data from a nationwide medical database, namely the National Health Insurance Research Database (NHIRD), to assess the association between GP and subsequent risk of CHD development. We also assessed the contribution of cholecystectomy to the risk of CHD for the GP patients.

The Taiwan National Health Insurance (NHI) program has started since 1995 and this mandatory government-monopolized program has covered more than 99.2% of the residents in Taiwan (24). The National Health Research Institutes (NHRI), which owns many good statisticians and computer experts, is the largest health research institute in Taiwan and has been authorized by the government to establish NHIRD for storing the database of NHI program. The NHRI is responsible for the provision of appropriate data files to the researchers. We obtained the Longitudinal Health Insurance Database 2000 (LHID 2000), a database containing the claims data for hospitalization for one million people from 1996 to 2011, randomly sampled from 2000 NHIRD enrollment records after application to the NHRI. The distributions of sex, age and health care cost between the one million population of the LHID 2000 and the 23 million population of the NHI program were similar. All the data have been de-identified and the diagnostic codes in the LHID 2000 were based on the International Classification of Disease, Ninth Revision, Clinical Modification (ICD-9-CM). The NHRI assigned a random number for each person by Knuth and Park and Miller’s method (25,26).

Any researcher can access this data after approval from the Taiwan Ministry of Health and Welfare (MOHW), and the patient consent is exempted due to de-identification of the NHIRD (27). The contact information for MOHW is: Taiwan Ministry of Health and Welfare Address: No. 488, Sec. 6, Zhongxiao E. Rd., Nangang Dist., Taipei City 115. Phone: +886-2-8590-6848. Email: stcarolwu@mohw.gov.tw.

The authors are accountable for all aspects of the work in ensuring that questions related to the accuracy or integrity of any part of the work are appropriately investigated and resolved. The Institutional Review Board (IRB) of China Medical University (CMUH104-REC2-115-CR4) has approved this study and waived the consent requirement.

We compared the distributions of categorical variables by the chi-square test and examined the differences of continuous variables by the Student t-test. A Kaplan-Meier curve was plotted to show the cumulative incidence of CHD, and the differences between the cohorts was analyzed by the log-rank test. The incidence densities of CHD were expressed as person-years for the cohorts. Univariate and multivariate Cox proportional hazards models were used for the expression of hazard ratios (HRs) and 95% confidence intervals (CIs). We used a test of scaled Schoenfeld residuals to examine the proportional hazard model assumption. The proportionality assumption would be violated if the results of the test revealed a significant relationship between Schoenfeld residuals for GP and follow-up time (P value =0.01). In the subsequent analyses, we stratified the follow-up duration to deal with the violation of proportional hazard assumption. The risk factors for adjustment in multivariate Cox models included age sex, and comorbidities of hypertension, diabetes, hyperlipidemia, gallstone, COPD, and arrhythmia. The software used for statistical analyses was SAS version 9.4 (SAS Institute Inc., Cary, NC, USA), and a 2-sided test with a P value <0.05 was considered statistically significant. 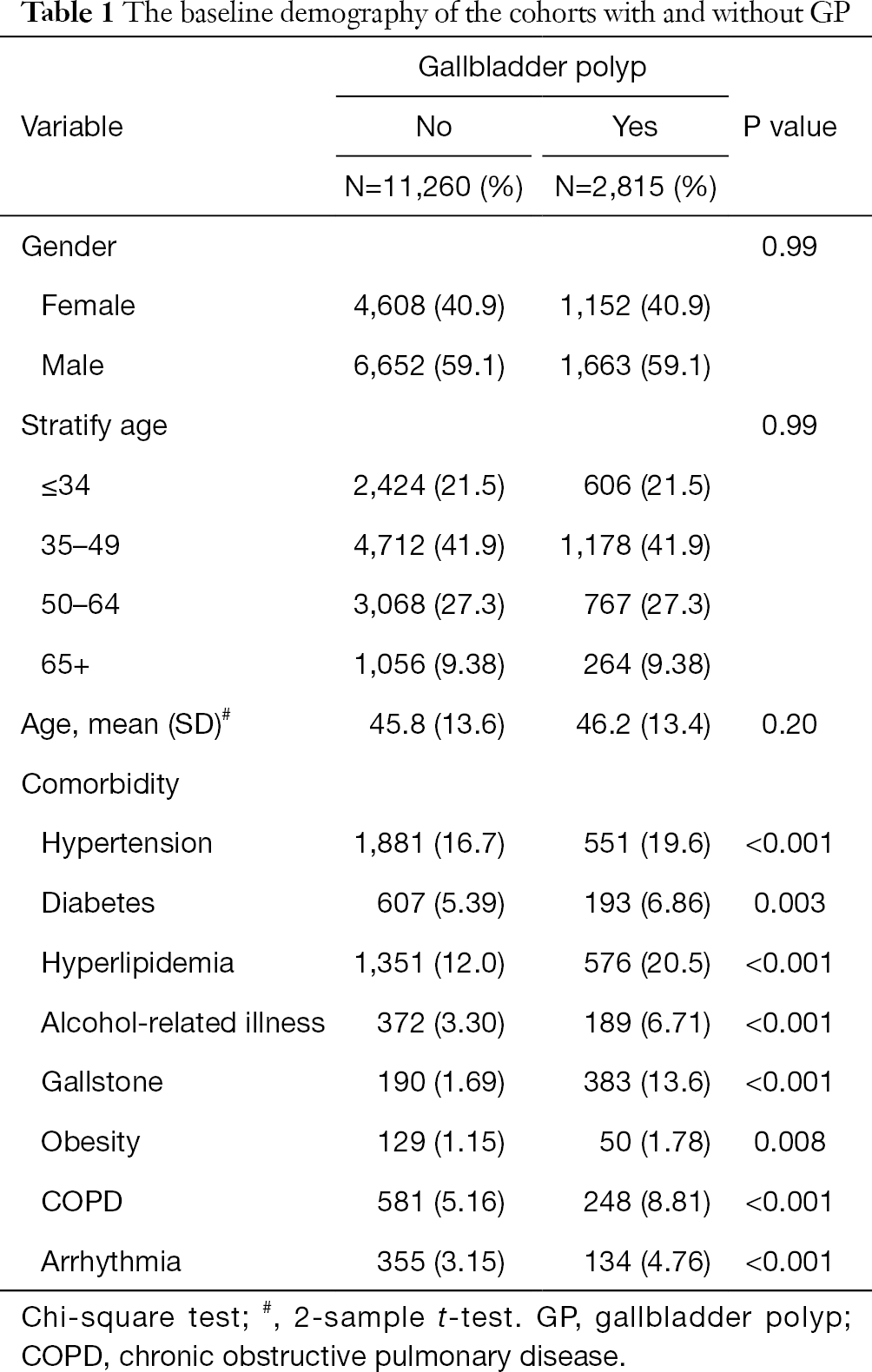 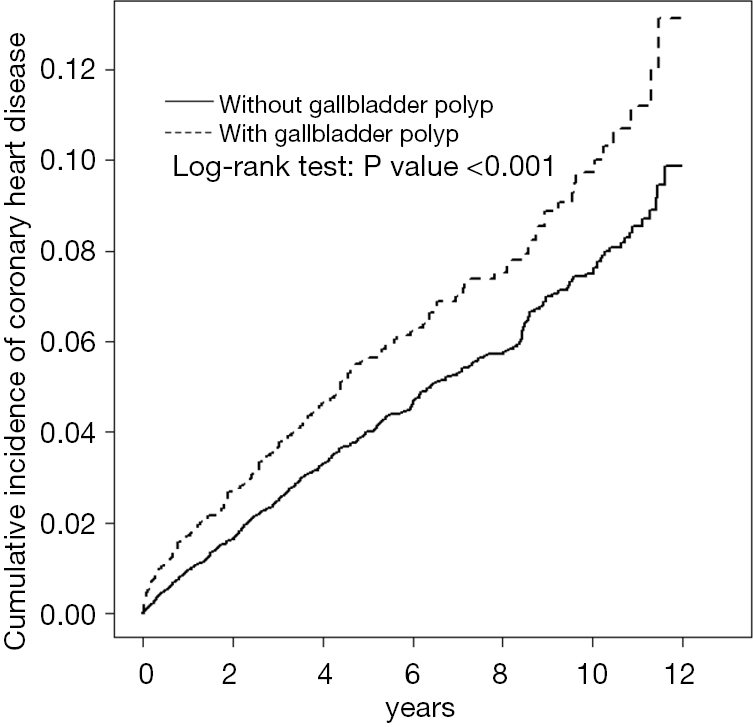 Figure 1 Cumulative incidence of coronary heart disease for patients with and without gallbladder polyp. 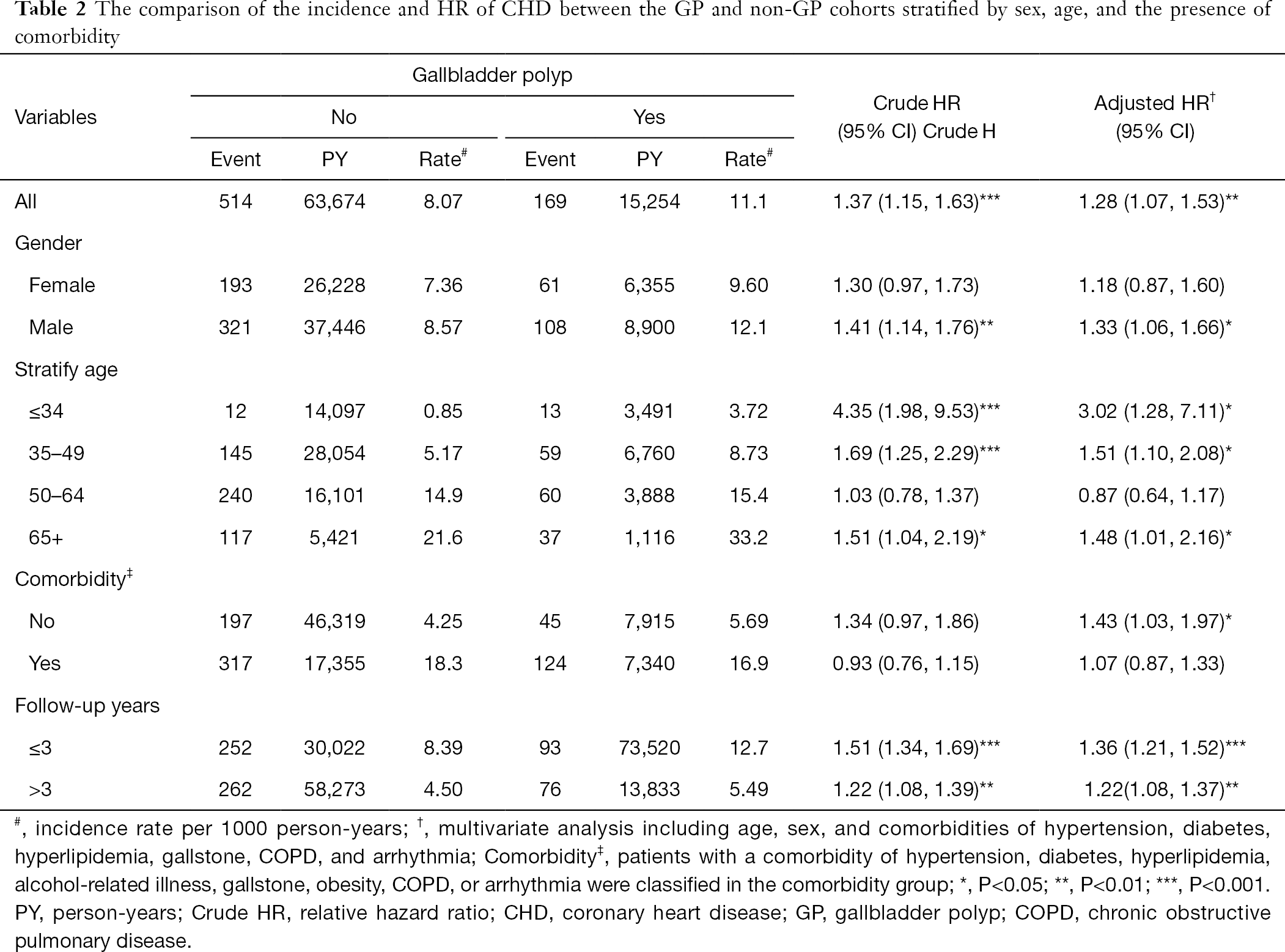 Table 2 The comparison of the incidence and HR of CHD between the GP and non-GP cohorts stratified by sex, age, and the presence of comorbidity
Full table 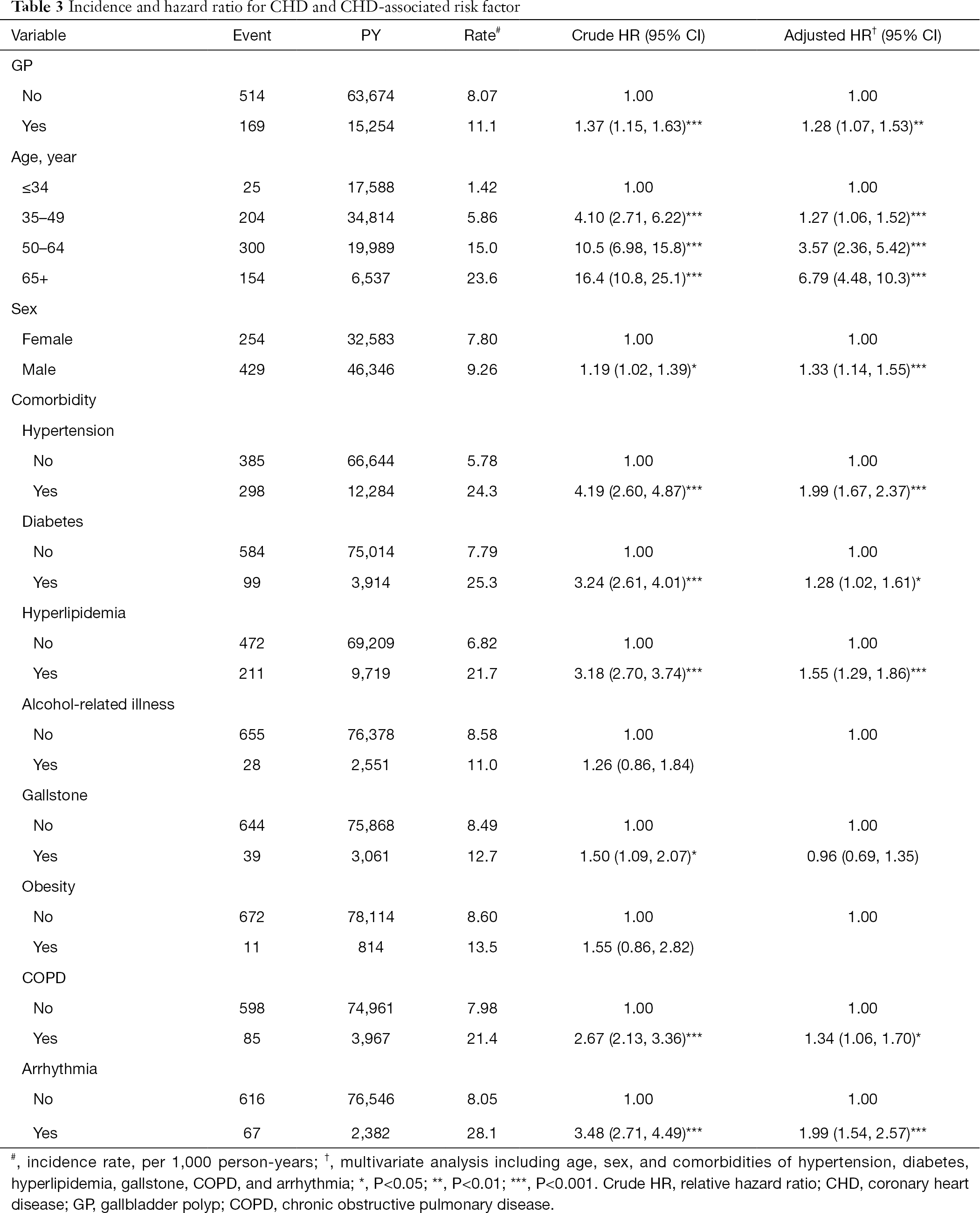 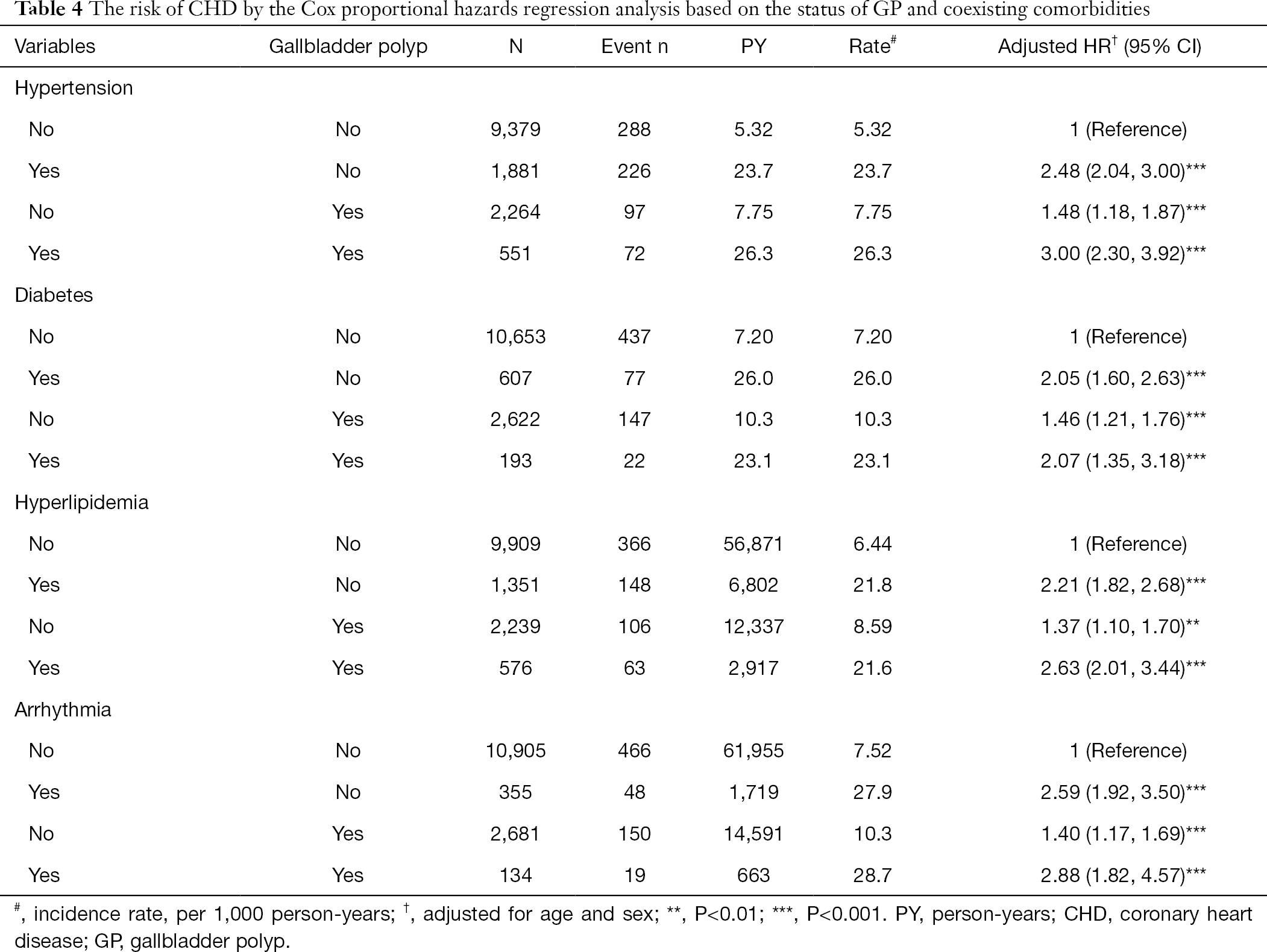 To our knowledge, our population-based study is the first to demonstrate the risk of CHD will increase after diagnosis of GP. Most former GP-associated studies focused on the prevalence or risk factors of GP alone, even though some risk factors for CHD have been found to be related to the development of GP (5-9,13-15). The use of a nationwide database with a large population and the 12-year observation enhanced the statistical power and provided the generalization in Taiwan.

In contrast to gallstones, our study showed that GP had the predilection of male gender. Estrogen may protect from the development of GP since it can impair the esterification of cholesterol by reducing the activity of both hepatic and intestinal acyl-CoA: cholesterol acyltransferase 2 (ACAT2), an enzyme facilitating the pinocytosis of cholesterol and papillary hyperplasia in the gallbladder mucosa (28).

Hyperlipidemia, hypertension, gallstones, and diabetes were the most common comorbidities for GP, and our findings show that GP and CHD share several common risk factors (5-9,13-15). The association between GP and CHD may be an epiphenomenon, rather than a causal effect, due to shared common risk factors. However, we have tried to minimizing the confounding effect of CHD risk factors in the multivariate Cox proportional hazards model (Table 3). In addition, the significant contribution of GP for the CHD development in the younger individuals may be due to the absence or low prevalence of CHD-associated comorbidities in the younger patients. The contribution of GP to the development of CHD was similarly greater for patients without comorbidity (Table 2). Furthermore, the cumulative incidence of CHD was higher in the GP cohort than in the non-GP cohort even though the mean follow-up period was shorter in the GP cohort (5.42±3.28 y) than in the non-GP cohort (5.65±3.24 y) (Figure 1). Irrespective of the duration of follow-up, the risk of CHD was persistently for the GP cohort than that for the non-GP cohort. The risk of CHD was significantly higher in the non-cholecystectomy cohort of GP patients than that in the non-GP cohort, but the risk of CHD contributed by GP was not significant after cholecystectomy. All these findings support that GP may be a risk factor of CHD, but our results show that GP was inferior to the traditional risk factors, such as hypertension, diabetes, and hyperlipidemia, in contributing to the development of CHD (Table 4). However, it needs more studies to ascertain the to ascertain the causal effect of GP on the development of CHD due to lacking potential confounding factors and the inherent limitation of this observational study.

The present study had several strengths. First, the large-scale national database provided a statistical power to our study. Second, the recruited patients were sampled from a stable population of Taiwan to provide the generalization in Taiwan. Third, our study adopted a longitudinal rather than cross-sectional approach to provide a temporal relationship between GP and CHD.

Nevertheless, our study had some limitations. First, the potential CHD-related confounding factors could not be fully assessed in this study. Second, we could not confirm the histopathological nature of polypoid lesions to make the differentiation between true polyps and pseudopolyps due to the unavailability of histopathology in the database. Most GP patients will not undergo cholecystectomy without signs of malignancy and all the literature on the epidemiology of GP made the diagnosis by using only ultrasonography. However, the accuracy of ultrasonography in diagnosing GP exceeds 90% and cholesterol polyps are assumed to be the most common type of GP (2,3). Third, the diagnosis of GP identified in this study was made by the discretion of the doctors in charge of the symptomatic disease, rather than screening of the general population, based on the claims data for hospitalization. Therefore, there might be a cohort specific bias or mis-classification of asymptomatic GP patients into non-GP patients in our study. However, the possible skewed association has been minimized by assessing the risk of CHD in GP patients with and without cholecystectomy. The risk of difference was significant between the non-cholecystectomy cohort of GP patients and the non-GP cohort; nevertheless, the risk difference of CHD was comparable between the cholecystectomy cohort of GP patients and the non-GP cohort. Our findings supported that GP per se is associated the subsequent development of CHD, but we could not ascertain GP is an epiphenomenon or independent risk factor of CHD. Finally, the pathogenesis for the association between GP and CHD development could not be ascertained in our observational study.

This retrospective observational study had its inherent limitation for the unavailability of possible confounding factors. This nationwide population-based cohort study revealed that GP is associated with increased risk of developing CHD and the risk increases with coexisting hypertension, diabetes, hyperlipidemia, or arrhythmia. However, GP may be less influential than other risk factors, such as hypertension, diabetes, and hyperlipidemia, in contributing to CHD development. Our findings of this study were consistent with our former literature, which similarly showed GP was inferior to the conventional risk factors in contributing to the development of stroke and the risk of GP associated stroke increased in subjects of younger age or without comorbidity (16). Further study is required to clarify whether GP is an epiphenomenon or independent risk factor for cardiovascular disease development. However, the risk of cardiovascular disease increased in GP patients with co-existing comorbidity.

Ethical Statement: The authors are accountable for all aspects of the work in ensuring that questions related to the accuracy or integrity of any part of the work are appropriately investigated and resolved. The Institutional Review Board (IRB) of China Medical University (CMUH104-REC2-115-CR4) has approved this study and waived the consent requirement.