Urinary tract infection (UTI) is common in clinical practice and urine culture is the “gold standard” for its diagnosis (1). However, urine culture has its intrinsic disadvantages. First, it is time- and labor-consuming and does not facilitate early diagnosis. Second, a large portion of specimens sent for urine culture are negative and thus increase the workload of the clinical microbiology laboratory. Therefore, developing UTI screening tools to decrease the rates of unnecessary urine culture is of great value. However, it should be kept in mind that the screening tools are typical “double-edged sword”, although it can decrease the rates of unnecessary urine culture, some UTI patients may be missed. Therefore, it is necessary to evaluate whether the screening tool is of net benefit.

Routine urine analysis has been widely used in UTI screening for a long time. A previous meta-analysis indicated that white blood cells (WBCs) and bacteria, which are measured by automated urine analyzer, are useful tools for UTI screening (2). The sensitivity and specificity for WBCs in the previous meta-analysis were 0.87 and 0.67, respectively. For urine bacteria, the sensitivity and specificity were 0.92 and 0.60, respectively (2). Additionally, two previous studies also indicated that urine nitrite is of value for UTI diagnosis (3,4). However, to the best of our knowledge, this type of research has only reported the sensitivity, specificity and area under receiver operating characteristic (ROC) curve (AUC). These metrics, although they have been widely used in screening or diagnostic trials, only reflect the predictive accuracy of an index test and do not incorporate information on consequences. Additionally, it also remains unclear whether these tests, when used together, can improve the predictive accuracy and net benefit for UTI.

In this study, we investigated the predictive accuracy of a combined model incorporating WBCs, bacterial and nitrite using the logistic regression model, net reclassification improvement (NRI) and integrated discrimination improvement (IDI). Additionally, the net benefit of the model and the single test was analyzed using decision curve analysis (DCA).

This is a retrospective observational study using the data stored in the laboratory information system (LIS) of our institution. All urine specimens sent to the clinical microbiology laboratory for culture between January 2017 and April 2017 were eligible. The exclusion criteria were the following: (I) specimens without routine urine analysis within 24 hours before or after urine culture; (II) contaminated specimens, defined as more than three types of bacteria identified. Of the remaining eligible cases, we extracted the following data from the LIS: age, sex, urine culture results, urine WBCs, bacteria and nitrite. Urine WBCs and bacteria were detected with Sysmex UF-1000i automated urine sediment analyzer. UTI was defined as more than 105 cfu/mL bacterial growth, as previously described (5).

This study was approved by the ethics committee of our institution (No. KY2018026) and the study was performed in accordance with the Declaration of Helsinki. Informed consent was waived because the retrospective design of this study.

According to our experience, the prevalence of UTI is approximately 15% in the urine specimens sent to clinical microbiology laboratory for culture. The alpha, AUC of ROC and its 95% confidence interval (95% CI) width were set at 0.05, 0.80 and 0.10, respectively. The calculated sample size was 780, including 117 UTI specimens from UTI patients. Sample estimation was performed with PASS 15 (NCSS Statistical Software, Kaysville, Utah, USA).

Because all continuous variables were not normally distributed (Kolmogorov-Smirnov test), they were expressed as median and interquartile and compared with the Mann-Whitney test. Categorical variables were expressed as absolute number and compared with the chi-square test. The ROC curve analysis was used to estimate the screening performance of WBCs and bacteria for UTI. We used the logistic regression analysis to incorporate WBCs, bacteria and nitrite into a model and estimated the screening performance of the model using ROC curve analysis. The threshold with maximum Youden index was chosen as the optimal threshold and the corresponding sensitivity and specificity were calculated. NRI and IDI were used to estimate whether the model, by incorporating WBCs, bacteria and nitrite, provides added values beyond a single test (6). DCA was used to estimate the net benefit of WBCs, bacteria and the model (7). All analyses were performed with Sigmaplot 12.0 (Systat Software Inc., San Jose, CA, USA), SPSS 18.0 (SPSS, Inc., Chicago, IL, USA) and R (https://www.r-project.org/, version 3.5.0). The packages used with R included PredictABLE (8) and rmda (9). A P value less than 0.05 was defined as statistically significant.

Characteristics of the subjects

Between January 2017 and April 2017, 1,525 urine specimens were sent to our clinical microbiology laboratory for culture. Among them, 140 specimens were contaminated, and 569 specimens did not have results of urine flow cytometry. Finally, 927 specimens with 156 UTIs were included in the present study. The characteristics of these specimens are summarized in Table 1. 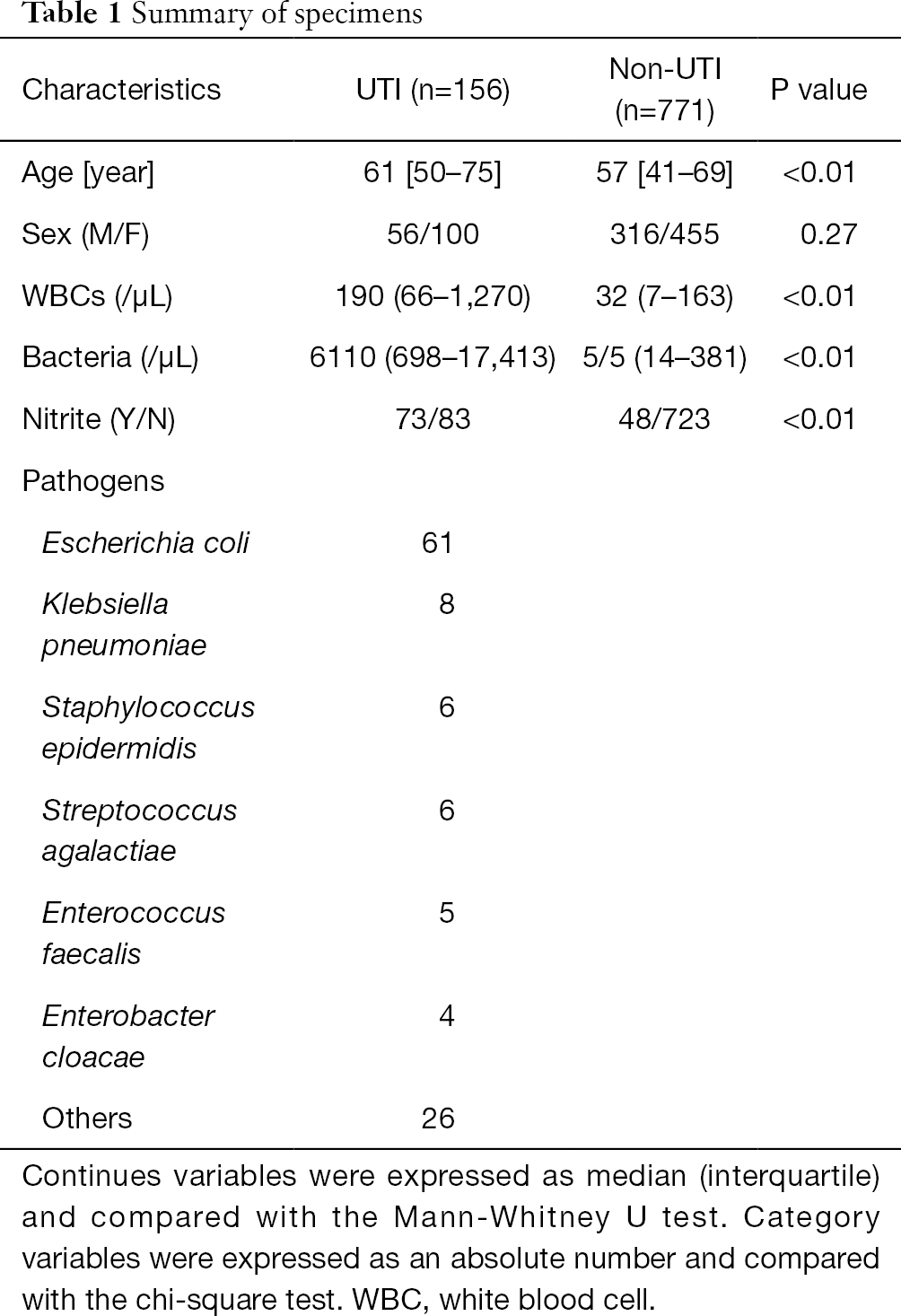 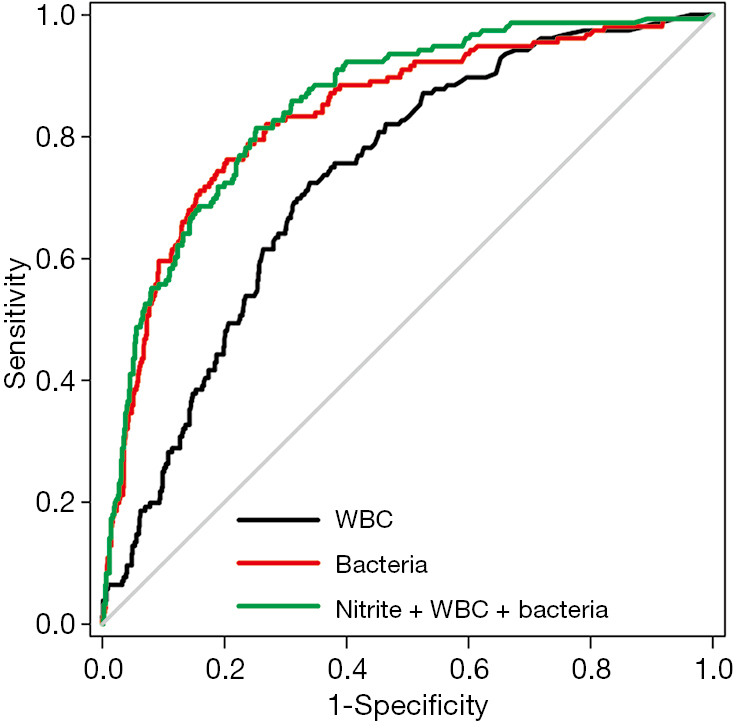 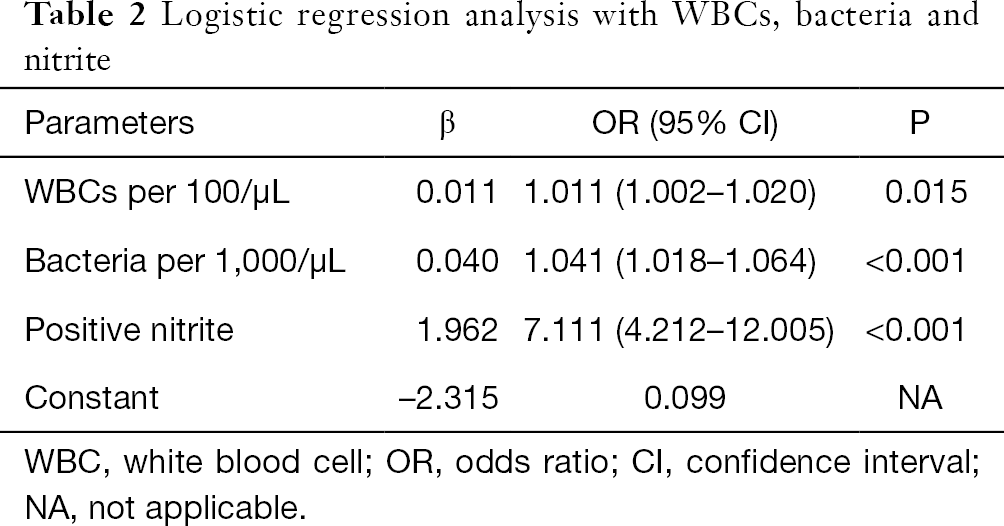 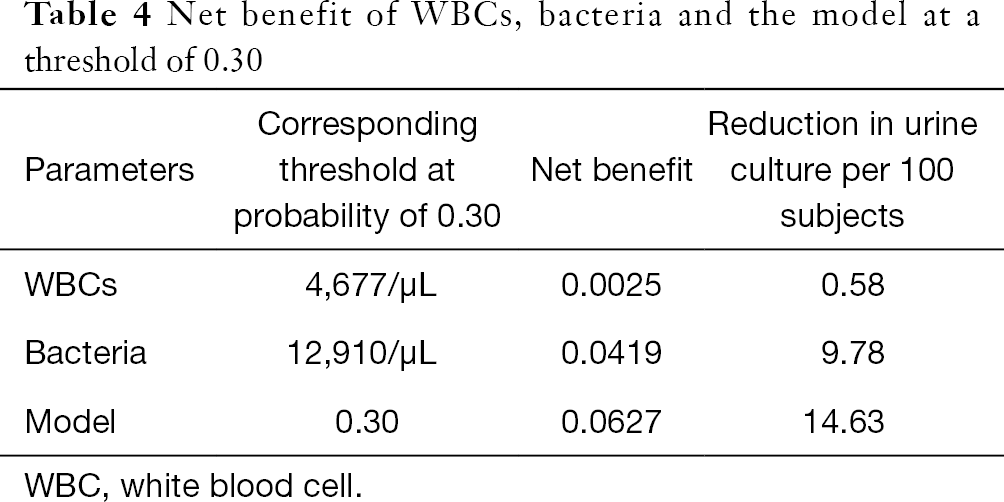 Table 4 Net benefit of WBCs, bacteria and the model at a threshold of 0.30
Full table

Similar to a previous meta-analysis (2), we found that both WBCs and bacteria had a higher screening performance for UTI screening, and the screening performance of bacteria was significantly higher than that of WBCs. However, compared with previous studies, our study had two strengths. First, we found that combined use of WBCs, bacteria and nitrite improved the efficiency of UTI screening. The logistic regression model incorporating WBCs, bacteria and nitrite had a significantly higher AUC than that of WBCs. Furthermore, the results of IDI and NRI indicated that combined use of WBCs, nitrite and bacteria had a higher screening efficiency than the single parameter alone. Second, previous studies only calculated the AUC, optimal thresholds, and corresponding sensitivity and specificity of routine urine parameters for UTI screening. However, these metrics only concern the accuracy of an index test, and do not incorporate information on clinical consequence (7). In this study, we used DCA to estimate the net benefit of these parameters. Unlike traditional ROC curve analysis, DCA uses “treat all” and “treat none” as reference and can calculate the net benefit of an index test. We noted that the decision curve of WBCs nearly overlapped with the reference line (“treat all” and “treat none”), indicating that it has limited value in UTI screening, although its AUC was 0.729. By contrast, the decision curve of bacteria was notably above the reference line, indicating that introducing urine bacteria into the UTI screening procedure has a high net benefit. Furthermore, we noted that the decision curve of the model incorporating bacteria, WBCs and nitrite was above that of bacteria, indicating that combined use of WBCs, bacteria and nitrite has a significantly higher net benefit than that of a single one.

Our findings had some clinical implications. Because WBCs, bacteria and nitrite are usually tested together to screen UTI in clinical practice, the coefficients (Table 2) of these parameters can be easily incorporated into the LIS and thus the probability of UTI can be easily calculated. Listing this probability into their laboratory reports may help clinicians better manage suspected UTI subjects.

Our study has two limitations. First, this is a single center study with a small sample size. The coefficients of WBCs, bacteria and nitrite in a logistic regression model may be affected by the prevalence of the UTI and the disease spectrum in the target population. Second, this is a retrospective study based on the specimens sent to the clinical microbiology laboratory, and no inclusion and exclusion criteria were defined on symptoms and signs. Therefore, the representativeness of the studied cohort may be negatively affected. Our results need to be validated by other centers. Despite these limitations, our study did analyze the screening performance of routine urinary parameters using DCA and thus can provide a new insight into UTI screening. Further prospective, multicenter studies with larger sample sizes are needed to validate the findings of this study.

In conclusion, our study indicates that urine bacteria had a high net benefit for UTI screening, while WBCs had limited value. Furthermore, combined use of bacteria, WBCs and nitrite had a higher net benefit than any single one of these parameters alone.

Conflicts of Interest: All authors have completed the ICMJE uniform disclosure form (available at http://dx.doi.org/10.21037/atm.2019.09.52). The series “Advances in Laboratory Tests for Infectious Diseases” was commissioned by the editorial office without any funding or sponsorship. ZDH served as the unpaid Guest Editor of the series and serves as an unpaid Executive Editor of Annals of Translational Medicine from Apr 2020 to Mar 2025. The other authors have no other conflicts of interest to declare.

Ethical Statement: The authors are accountable for all aspects of the work in ensuring that questions related to the accuracy or integrity of any part of the work are appropriately investigated and resolved. This study was approved by the ethics committee of our institution (No. KY2018026) and the study was performed in accordance with the Declaration of Helsinki. Informed consent was waived because the retrospective design of this study.