The middle-term result of laparoscopic sleeve gastrectomy in Chinese obesity patients in a single hospital, with the review of literatures and strategy for gastric stenosis

Bariatric and metabolic surgery for morbid obesity and obesity with comorbidity has proved effective and is becoming popular throughout the world (1-3). Laparoscopic sleeve gastrectomy (LSG) is one type of bariatric and metabolic surgery with lower morbidity and complication rates and similar effectiveness when compared with laparoscopic Roux-en-Y gastric bypass or laparoscopic biliopancreatic diversion with duodenal switch (1,4). The number of LSGs being performed worldwide has sharply increased in recent years (5). Furthermore, the early results of LSG have been so promising, it is now under investigation as a solitary surgical procedure for weight loss and obesity related diseases (6,7).

In Chinese populations, there was little research of bariatric and metabolic surgery in treating obesity with middle or large term result. The objective of this study was to report on the preliminary middle-term results of LSG in Chinese patients.

Between February 2011 and February 2015, a total of 142 patients underwent LSG. The human research review board of our institution approved the study and all patients provided written informed consent.

Following the latest guidelines for metabolic surgery from the Chinese Society for Metabolic and Bariatric Surgery, the inclusion criteria were as follows: Patients with a body mass index (BMI) over 35 kg/m2 and associated comorbidities or a BMI over 30 kg/m2 but with severe comorbidities, such as osteoarticular problems, diabetes, or dyslipidemia, were included in the study. Patients with established diagnoses of type 1 diabetes, latent autoimmune diabetes in adulthood, malignancy, debilitating disease, unresolved psychiatric illness or substance abuse were excluded.

The incidence of stenosis after LSG during a recent 10-year period was examined. A literature search of English-language studies was conducted using the following terms: sleeve, sleeve gastrectomy, complications, stenosis, and strictures.

Prophylactic heparin and antibiotics were administered preoperatively. After the induction of general anesthesia, LSG was performed using 4 ports, a carbon dioxide pneumoperitoneum was achieved to 15 mmHg pressure, and all trocars were placed under direct vision. During the procedure, the assistant introduces, via the mouth, a 37-French bougie inside the gastric lumen to prevent narrowing of the tubular stomach. The short gastric vessels were taken down with the Harmonic scalpel (Ethicon Endosurgery) 5 cm proximal to the pylorus up to 1 cm from the angle of His using 4.8-mm green staples and 3.5-mm blue staples (Ethicon Echelon 60, EC60 stapler). This leaves a small gastric tubular pouch of 60- to 80-mL capacity. The greater curvature, including the posterior fundus, is mobilized, and a methylene blue test is performed to test for intraoperative leaks. Bleeding at the staple line is controlled with metal clips. A 16 F round drain was placed in the sub-hepatic space along the suture line. All patients recovered in an intermediate care unit. The liquids were initiated on the fifth postoperative day and then the drain was removed.

A total of 142 patients underwent LSG successfully without requiring conversion to the open technique. The mean age of the patients (44 males and 98 females) was 29.36 years. Detailed pre- and postoperative demographics are listed in Table 1. All patients were followed up for at least 36 months after surgery. The body weight, BMI, waistline and hipline were significantly reduced compared with baseline continuously. Mean BMI achieved within 28 kg/m2 in 12 months after surgery. The serum lipid levels were significantly reduced. No mortality, leak, bleeding, or infection occurred. No severe malnutrition or vitamin or mineral deficiencies were observed in 36-month-follow-up.

However, one patient developed persistent stenosis (1/142, 0.7%). The operation was uneventful, and the patient was discharged after 1 week without any complaints. Two month postoperatively, patient reported postprandial nausea, vomiting and gastroesophageal reflux after drinking. An upper GI revealed a narrow passage at the middle sleeve (Figure 1) with delayed gastric emptying, but no obvious stenosis was observed (Figure 2). Several dilatations with a 45-F to 54-F bougie with supporting in nasojejunal enteral feeding were subsequently attempted without success (Figure 3). A gastric bypass was performed finally. The middle sleeve adhered to the ventral abdominal wall (Figure 4) resulting in stenosis has been found during surgery, which caused twisting of the gastric lumen. Once the adhesion was loosened, the stenosis was relieved and the twist was corrected (Figure 5). The patient has been completely asymptomatic since the gastric bypass surgery (Figure 6). The assessment of nutritive status for the stenosis case was showed in Table 2. 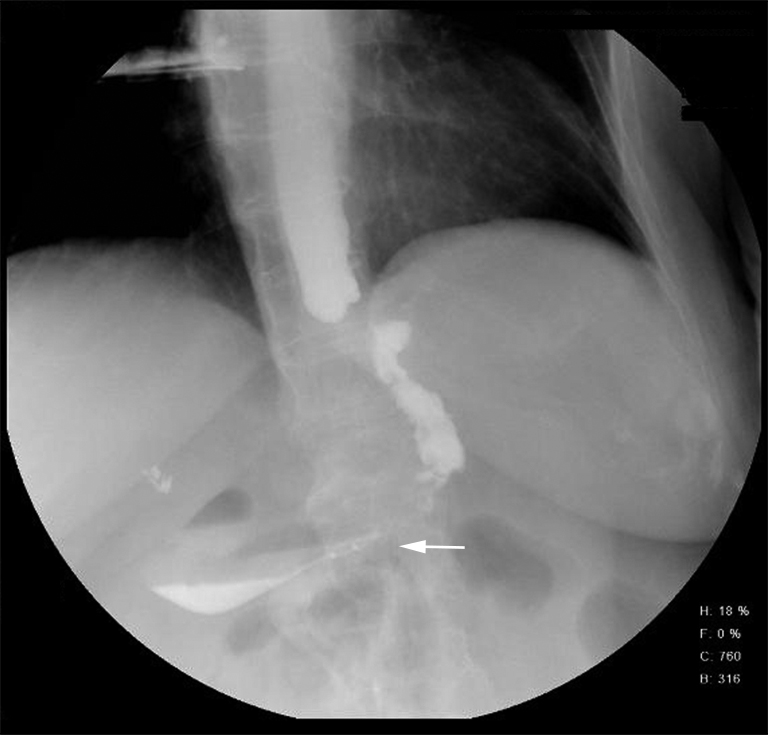 Figure 1 Upper abdominal gastrointestinal series shows a narrow passage in the middle sleeve at the 6th week after laparoscopic sleeve gastrectomy, indicated by the arrow. 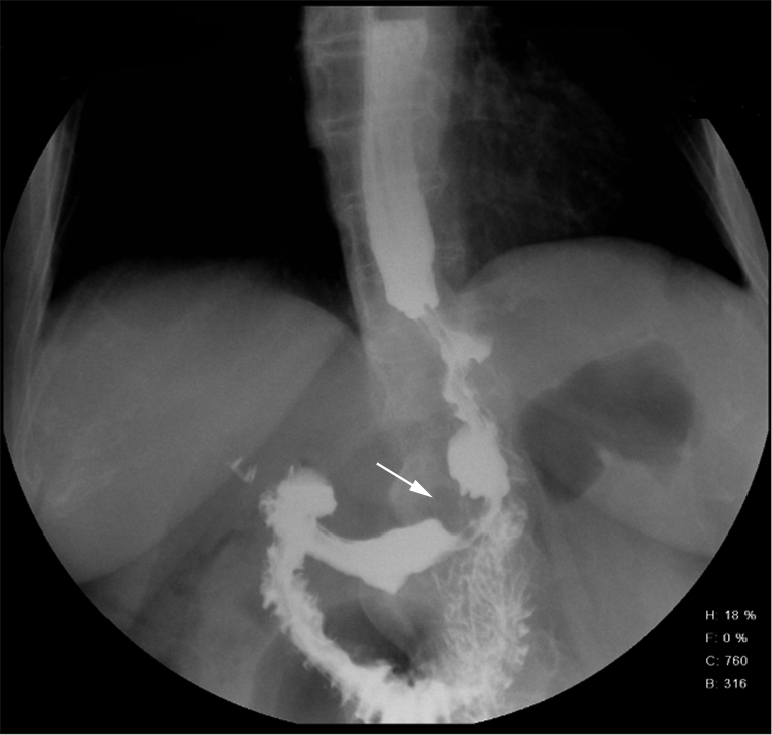 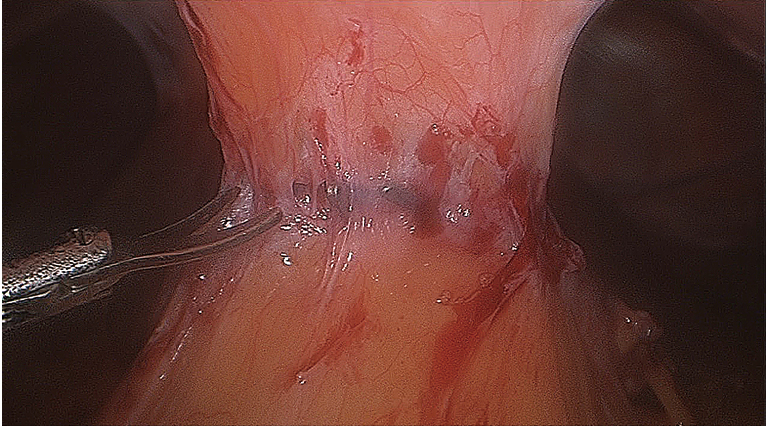 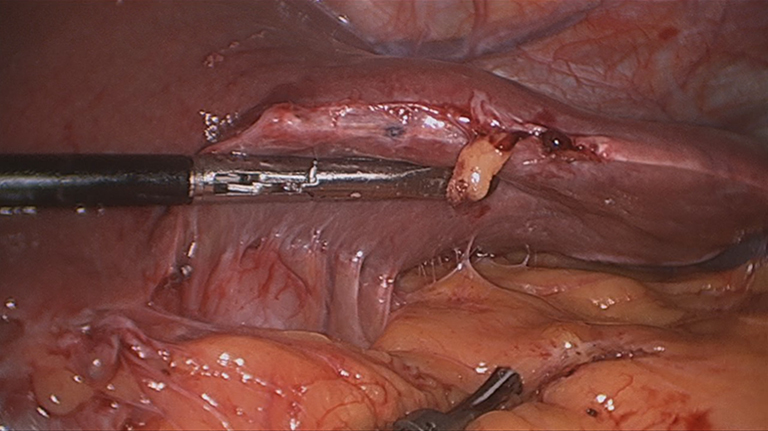 Figure 5 Final view of lysis of adhesions of the ventral abdominal wall. 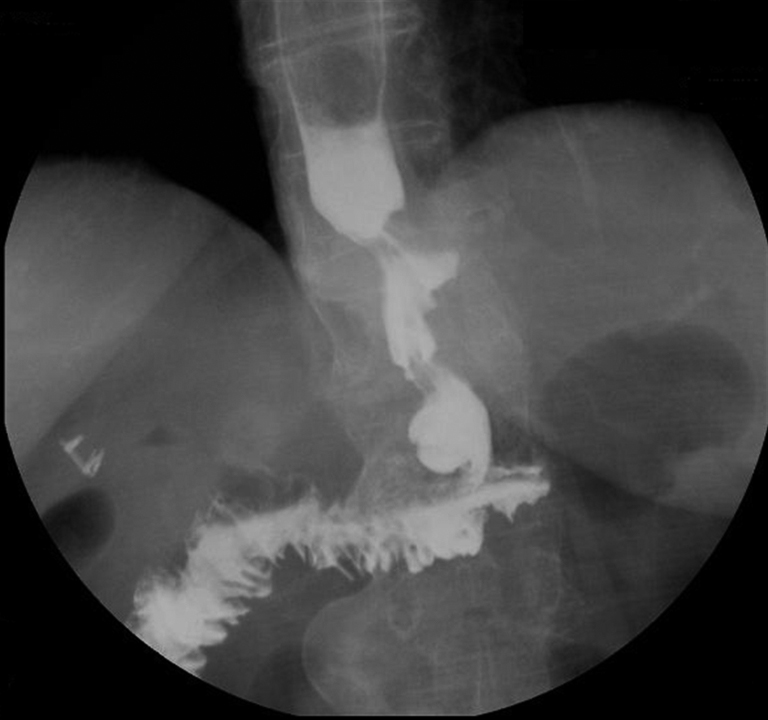 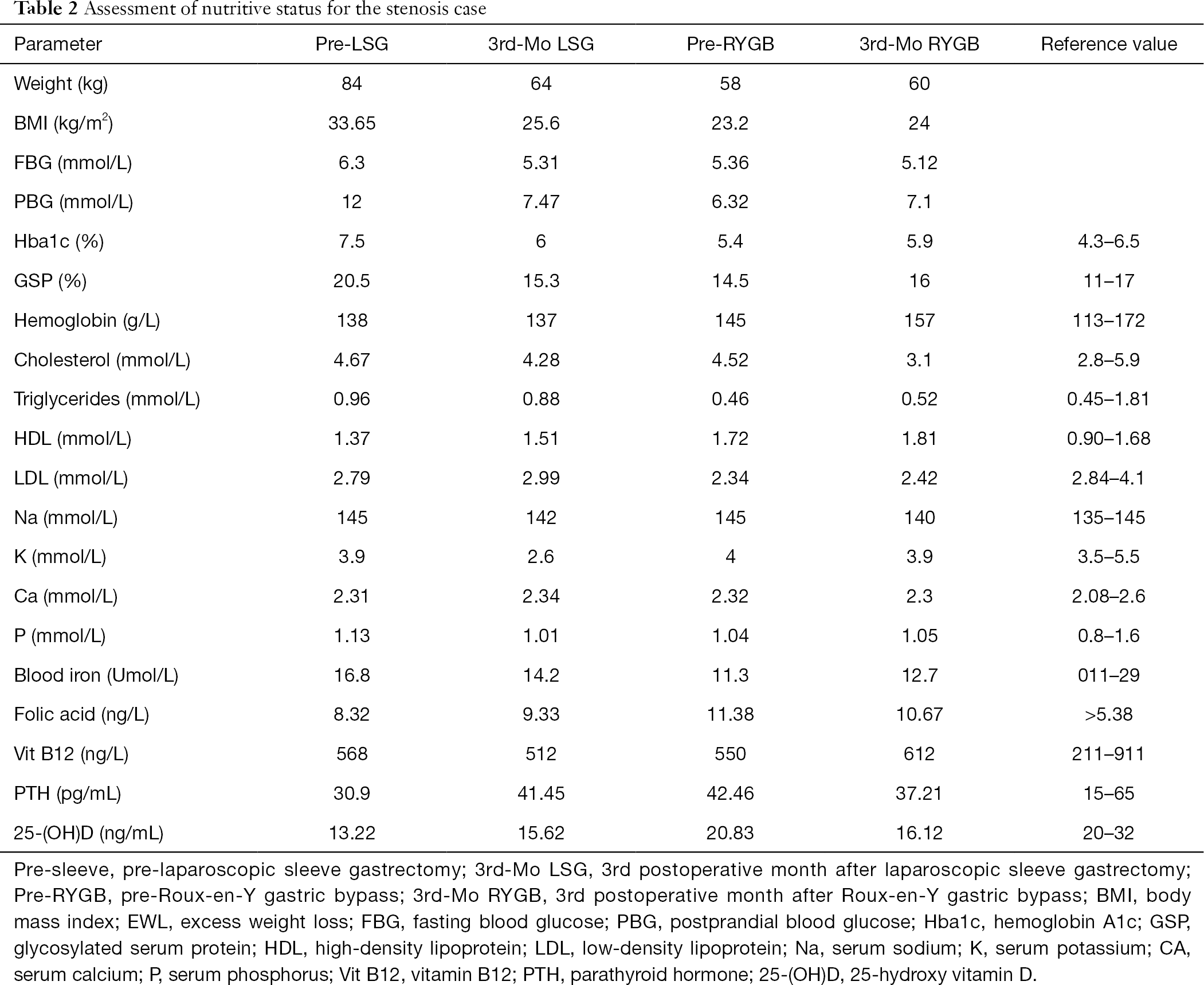 The incidence of stenosis after LSG in recent ten years has been estimated at 0.1–3.5% (8-15) (Table 3). In 47 cases of gastric stenosis, 83.0% (39 cases) were relieved by dilation, one or several times, with different size bougies, and only 4 cases were converted to gastric bypass, while 2 cases underwent resection of the stenotic segment, and 2 cases with conservative treatment. Seventeen cases (36.2%) of stenosis occurred in the middle of the gastric lumen, whereas 15 occurred in the proximal third, and 15 occurred in the distal third (Table 4). However, despite the Levy’s research, remained studies showed the most stenosis occurred in the middle of the gastric lumen (15/21, 71.4%). No gastric bypasses were performed for treatment of stenosis in the proximal third of the lumen. 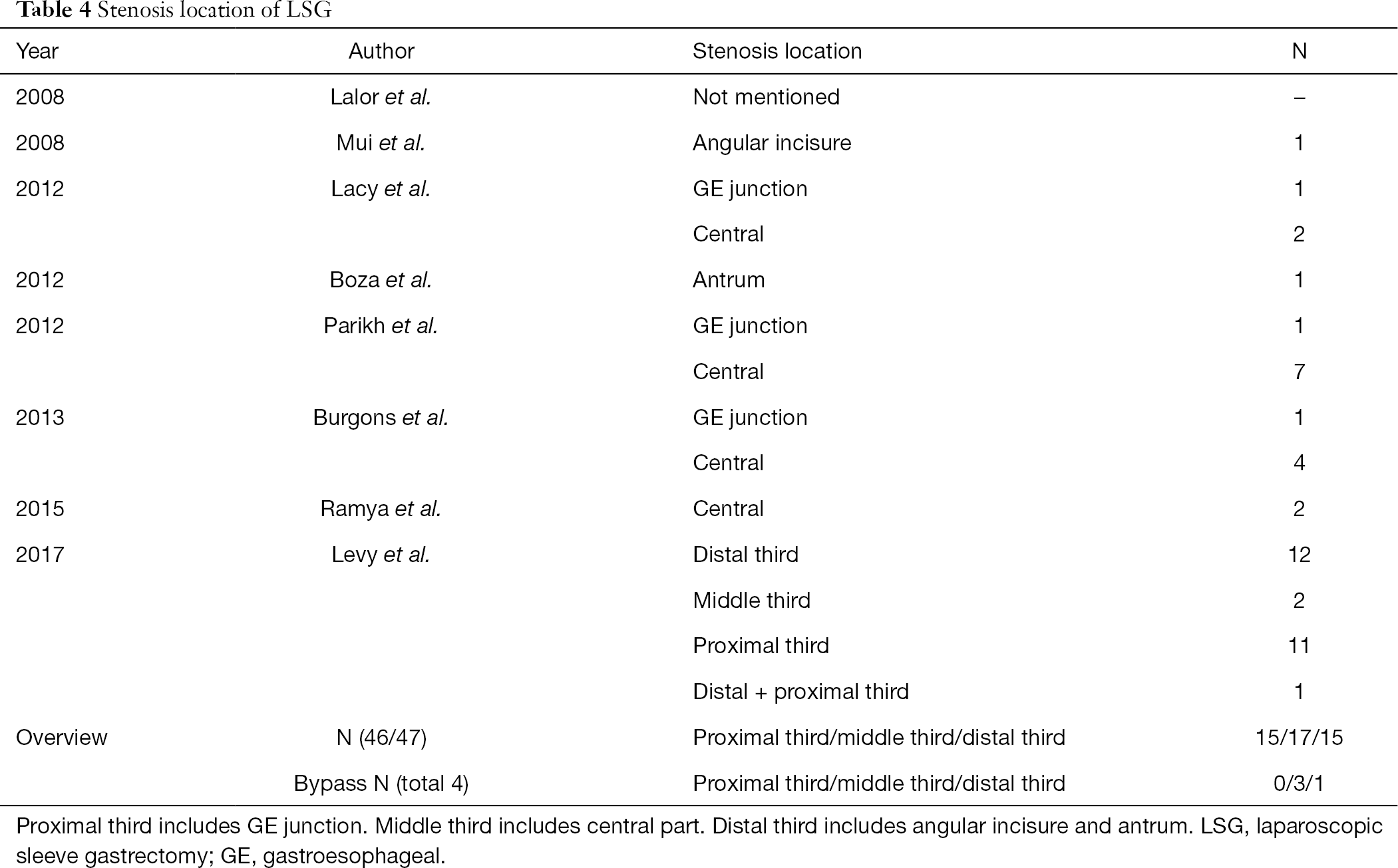 Sleeve gastrectomy was first introduced by Marceau and Hess for the treatment of morbid obesity in the 1990s (16,17). Since then, metabolic and bariatric surgery has become one of the most commonly performed types of gastrointestinal surgery for the treatment of type 2 diabetes mellitus (T2DM) with obesity worldwide. During the past few years, many encouraging reports have suggested that LSG is an effective, stand-alone procedure for T2DM with obesity (18). In this study, we report major perisurgical adverse outcomes in a recent cohort of patients undergoing the most common bariatric and metabolic surgical procedures performed by experienced surgeons in a single center in China. The surgical result confirms that LSG is a promising treatment for obesity in Chinese patients. All our patients had stabilization of weight within their normal range while avoiding the risk of malnutrition and being underweight. In addition, serum lipid levels were significantly decreased. Successful improvement of dyslipidemia can be translated into a decrease in mortality and further metabolic disorders. However, for only small number of patients who were diagnosed obesity with T2DM, this study didn’t not contain the data or analysis of diabetes status.

No severe malnutrition or vitamin or mineral deficiencies were observed in 36-months follow up. Previous studies already showed the importance of pre- and post-operative assessment of the nutritional status of patients undergoing a bariatric intervention (19) and recommended adequate supplementation based on laboratory values. Regular follow-up and adequate multivitamin intake might have contributed to the resolution of the deficiency risk.

With the growing enthusiasm to perform LSG in morbidly obese patients, sleeve procedures composed 45.9% of the total metabolic surgeries in the world during 2014 (5). Although LSG has several advantages over other metabolic and bariatric procedures (6,20-22), stenosis of the gastric sleeve is a complication of sleeve gastrectomy. As the number of LSG operations has increased sharply in recent years, so has the risk of postoperative stenosis.

Stenosis after LSG may result from multiple etiologies, including twisting of the gastric tube, indentation of the incisura within the gastric lumen, sharp angulation of the stapler during the surgery (23), small bougie size, hematomas, edema (8), or adhesions (24). In our patient, twisting of the upper gastric tube due to middle sleeve adhesion was the underlying cause. Table 4 shows the possible locations of stenosis in the gastric tube. In most research, most stenoses occur at the level of the middle sleeve, whereas stenoses at the upper or lower sleeve happen rarely.

Most stenoses are symptomatic in the first 6 weeks after surgery (25), and the diagnosis of stenosis after LSG is based on symptoms and endoscopic examination. However, while upper GI and endoscopy provide good visualization of the gastric tube, detection of external adhesions may require other imaging methods. In our patient, both upper GI and gastroscopy showed only delayed emptying, and no stenosis was seen. This made us hesitant to redo the procedure. If an examination had been able to provide an overview of the outside of the pouch, the correct diagnosis could have been made earlier. Virtual pouchography (VPG) has been reported to facilitate such diagnoses. Other options include 3-dimensional computed tomography and X-ray irradiation.

When faced with postoperative stenosis, it is always difficult for surgeons to decide when to intervene and whether to choose conservative treatment or a surgical procedure. Although, conversion of sleeve gastrectomy to gastric bypass has been advocated, conservative treatments, including stent insertion and bougie dilatation, have been reported to relieve symptoms successfully. Among reported stenoses, 3 patients with middle sleeve stenosis and 1 with lower sleeve stenosis underwent gastric bypass. No upper sleeve (gastroesophageal junction) stenoses were treated surgically. Dr. Vilallonga et al. (26) have reported that persistent stenosis can be managed by seromyotomy or wedge resection of the stomach, including the stricture, or stricture resection. However, these procedures have high complication and reoperation rates and should be performed with the greatest caution.

In our patient, multiple dilatations had minimal effect due to the adhesion at the middle sleeve level. Therefore, we performed a gastric bypass for upper gastric stenosis. This case confirmed the principle: solve the cause, solve the problem.

Important limitations of our study include the inadequate sample size and duration to detect differences in long-term efficacy and safety. Therefore, our results should be regarded as preliminary. Second, it only included patients from a single hospital. Finally, this study was retrospective and affected the conclusions. A randomized clinical trial is indicated before any firm conclusions can be made.

Despite the limitations in our study, we conclude that LSG represents an effective procedure to treat obesity patients in Chinese patients. Our patients achieved obesity remission and dyslipidemia disorder control and reduced their metabolic risk. Symptoms and endoscopy may suggest the presence of stenosis after LSG, surgical procedures, such as conversion to gastric bypass, are a second-line treatment option, but care should be taken to avoid complications.

Ethical Statement: The ethics of study was approved by the Ethics Committee of Shanghai Sixth People’s Hospital (No. 2016-123) and written informed consent was obtained from all patients.