Family history of coronary artery disease (FHxCAD) is an established risk factor for the development of acute myocardial infarction (AMI) (1). However, data relating to impact of FHxCAD on post-ST-segment myocardial infarction (STEMI) clinical outcomes is limited (2-5). In this study, we evaluated the impact of FHxCAD on in-hospital outcomes in 2,123,492 STEMI patients using Nationwide Inpatient Sample (NIS) database from 2003–2011.

NIS is the largest publicly available all-payer inpatient database available in the United States and it is sponsored by the Agency for Healthcare Research and Quality (6). We used International Classification of Diseases, ninth edition; Clinical Modification (ICD-9-CM) codes (410.01, 410.11, 410.21, 410.31, 410.41, 410.51, 410.61, 410.81, 410.91) to identify all patients ≥18 years of age admitted with a primary diagnosis of STEMI. FHxCAD was then identified using ICD-9-CM code, V.173, and all others were considered as patients with no-FHxCAD. Our primary outcome measure was all-cause in-hospital mortality, defined as “died” during the index hospitalization in the NIS database. Secondary outcomes were identified using ICD-9 and clinical classification software (CCS) codes, and included the following: acute cerebrovascular event (CCS-109), cardiogenic shock (ICD-9 CM-785.51), and intra-aortic balloon pump use (ICD-9 CM-37.61) during the hospitalization.

Baseline patient and hospital characteristics were compared using Pearson’s Chi-square test for categorical variables and the Student t-test for continuous variables. Multivariable unconditional logistic regression was used to examine the association of FHxCAD with primary and secondary outcomes. The regression models were adjusted for patient demographics, hospital characteristics and all comorbidities listed in Table 1. Statistical analysis was performed using SPSS 23.0 (IBM Corp., Armonk, NY, USA). A two-sided P value of <0.05 was used to identify statistical significance.

A total of 2,123,492 STEMI hospitalizations, with 7.4% (n=158,079) patients with FHxCAD and 92.6% (n=1,965,413) with no-FHxCAD were identified during the study period (Table 1). FHxCAD patients were younger (mean age: 56.2 vs. 65.8 years; P<0.001), more likely men (74.4%), private insurers (54.9%) and of white race (79.2%). They belonged to higher socioeconomic status, and presented to hospitals with the following characteristics: large bed-size (70.7% vs. 67.1%), urban location (92.4% vs. 87.4%), and teaching status (47.5% vs. 45.3%) when compared with no-FHxCAD patients. The prevalence of hypertension, diabetes (both uncomplicated and complicated), congestive heart failure, chronic pulmonary disease, peripheral vascular disease, carotid artery disease, renal failure and history of coronary artery bypass grafting was significantly lower in FHxCAD patients when compared with no-FHxCAD patients (all P<0.001). Furthermore, hyperlipidemia, obesity, alcoholism, smoking, and history of percutaneous coronary intervention were more prevalent in the FHxCAD group than the no-FHxCAD group (all P<0.001) (Table 1). FHxCAD group underwent significantly higher invasive coronary interventions such as diagnostic coronary angiography (87.4% vs. 68.4%), percutaneous coronary intervention (75.4% vs. 55.3%) and coronary artery bypass grafting (9.5% vs. 8.3%) on comparison with no-FHxCAD (all P<0.001). 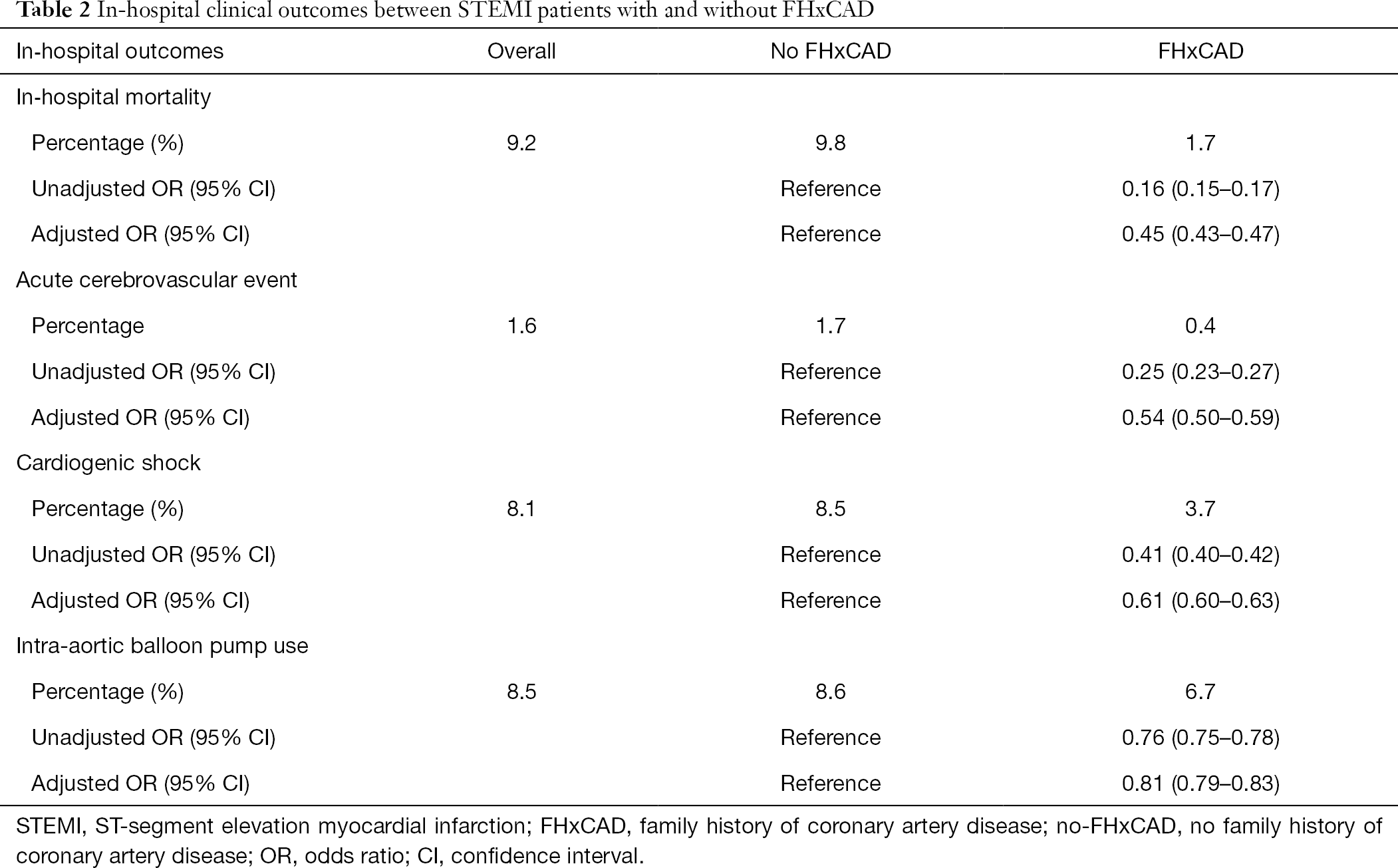 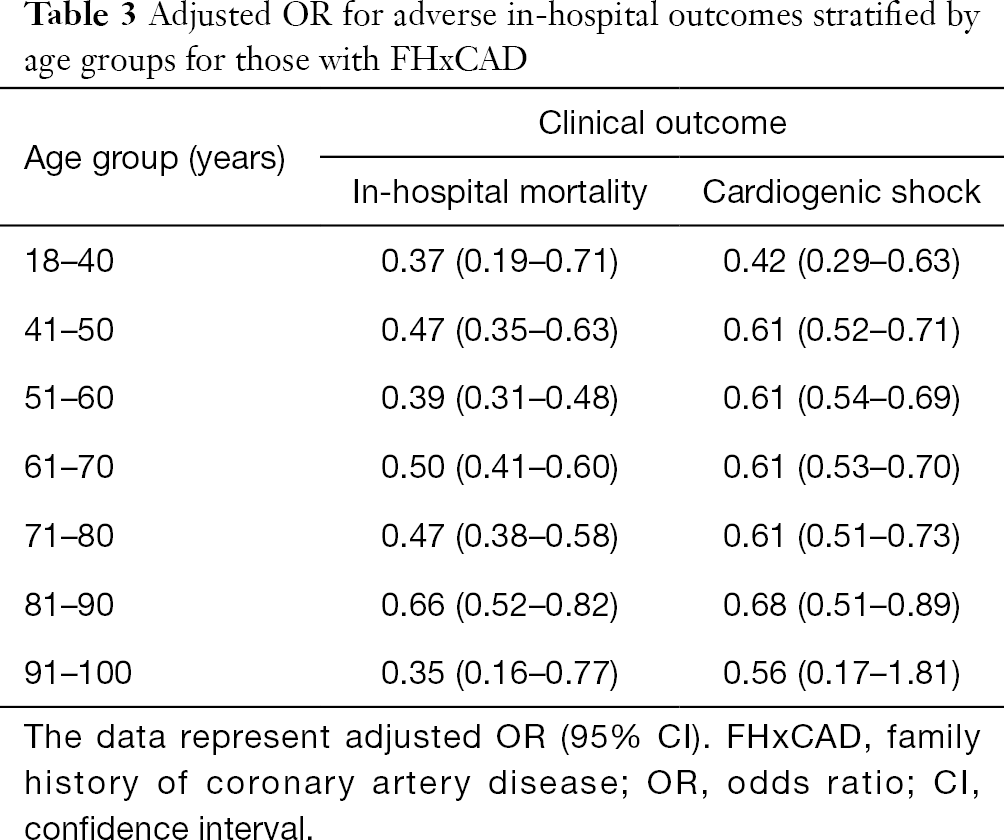 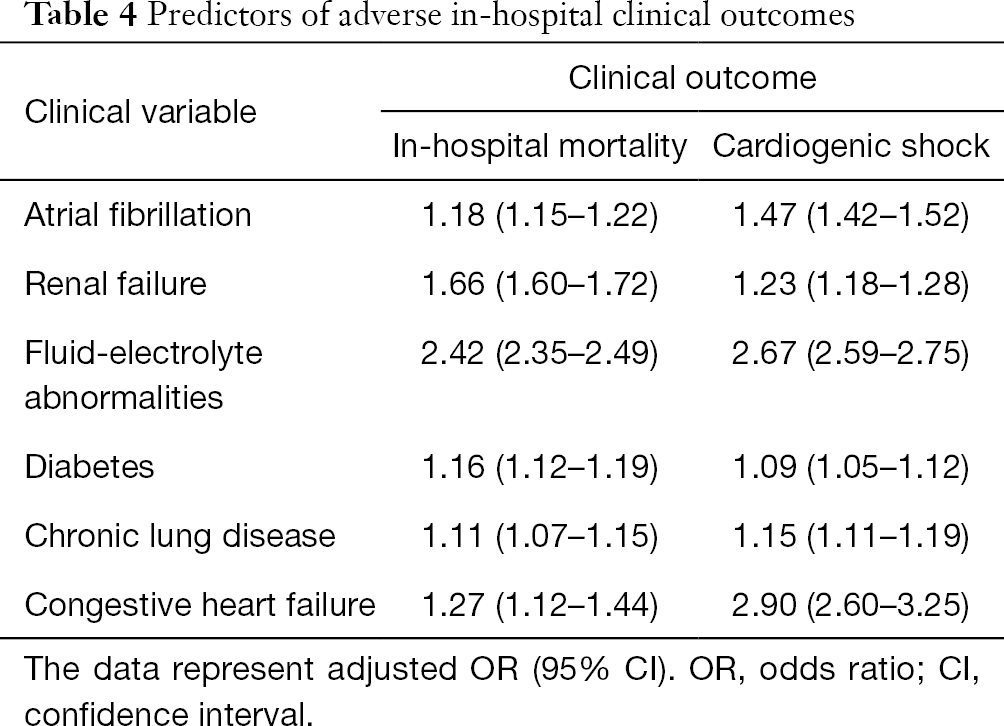 In this large sample study with 2,123,492 STEMI patients, even after multivariate adjustment for hospital and admission characteristics, patient demographics and comorbidities, patients with positive FHxCAD had significantly lower in-hospital mortality and acute cerebrovascular and cardiogenic shock events post STEMI. To the best of our knowledge, our study is by far the largest nationwide study till date to report the prognostic influence of FHxCAD on post STEMI clinical outcomes.

Prior smaller size investigations have reported similar results with respect to post MI in-hospital and long-term mortality (2-5). Data from a Canadian registry reported FHxCAD to be associated with significant reduction in long term all-cause mortality post MI (hazard ratio: 0.77, 95% CI: 0.73–0.80) (5). Similar results were demonstrated in an Israeli study with protective effect of FHxCAD at 30-day (OR: 0.50, 95% CI: 0.22–0.99) and 1-year mortality (OR: 0.58, 95% CI: 0.42–0.80) post MI (4). In contrast, Kim et al. in a large Korean nationwide prospective study compared post MI clinical outcomes in 11,612 acute MI patients and found out that FHxCAD was associated with increased risk of cardiac death and major adverse cardiovascular events (3). While data in US population is limited, a study based on US national registry of MI reported positive effects on short-term survival were also seen in MI patients (OR: 0.71, 95% CI: 0.69–0.73), similar to our study results (2). We observed a stronger relationship between FHxCAD and STEMI clinical outcomes from those reported earlier, which we believe can plausibly be due to differences in sample size, racial distribution, types of MI (NSTEMI and STEMI both vs. STEMI only in ours) and use of different types of covariates in regression model. We adjusted extensively from factors ranging from patient demographics to hospital characteristics to clinical comorbidities. Our study is the largest US study till date in which the positive survival impact of FHxCAD on in-hospital mortality persisted even after extensive adjustment for different factors.

The observations from our study can be explained by several potential reasons. Possibly, FHxCAD can positively influence the patients’ utilization and compliance of cardiovascular medications. A recent multicenter prospective study based on the APPROACH registry reported FHxCAD patients were more likely to be on cardiovascular medications such as aspirin, beta-blockers, statins, angiotensin converting enzyme inhibitors and angiotensin receptor blockers (5). Also, FHxCAD patients are more likely to be physically active, and consume healthy daily diet consisting of fruits and vegetables (8). In addition, patients with positive family history are more aware of future cardiovascular risk and also present earlier for the management of important modifiable risk factors such as hypertension (9). Furthermore, similar to our findings, higher utilization of life saving coronary interventions such as percutaneous coronary intervention and coronary artery bypass grafting has been reported by other studies in patients with FHxCAD (4,5). Also in our study, FHxCAD patients were likely to present to urban, bigger bed-size hospitals and academic institutions, which might have possibly led to the differences in approach and utilization of medical therapies. Moreover, a higher proportion of no-FHxCAD patients in our study had lower median household income, and were also more likely to be medicare insurers. Both economic and insurance has been previously associated with increased in-hospital mortality post MI due to differences in utilization of standard practice, health-care delivery systems and performance of emergency services (10,11). In addition, lower socioeconomic status has been associated with independent predictors of mortality such as poorer functional capacity and impaired heart rate recovery (12).

This study has several limitations, majorly due to the use of an administrative database and the retrospective nature of the study. NIS database has limited clinical information and is prone to coding errors or under coding. The prevalence of FHxCAD in our study was lower (7.4%) in comparison to those reported by earlier studies (15–30%) (2,4,5). Additionally, although we adjusted for multiple variables in regression model, the possibility of lack of adjustment for undiscovered confounding variables and treatment details cannot be ignored. The data from NIS database is collected at the level of hospitalization and is not individualized. This makes assessment of reasons behind individual patient specific issues, such as differences in insurance status, economic status and utilization of invasive coronary interventions, not possible. Lastly, post discharge follows up data and exact cause of death is not available.

In summary, FHxCAD was associated with lower risk adjusted in-hospital mortality and adverse clinical outcomes, in our large national unselected cohort of STEMI patients. Further research is warranted to determine whether the superior outcomes in FHxCAD patients with STEMI are related to differences in modifiable factors such as dietary habits, daily lifestyle activities, medications or coronary interventions.

Informed Consent: Informed consent is not applicable to this study as it is a retrospective study from a publicly open database.