In the example, I create five variables age, gender, lac, hb and wbc for the prediction of mortality outcome. The outcome variable is binomial that takes values of “die” and “alive”. To illustrate the selection process, I deliberately make that variables age, hb and lac are associated with outcome, while gender and wbc are not (4-6). 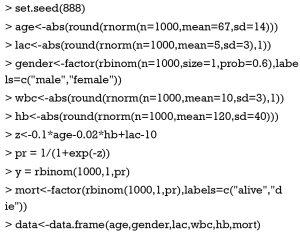 The first step is to use univariable analysis to explore the unadjusted association between variables and outcome. In our example, each of the five variables will be included in a logistic regression model, one for each time.

Note that logistic regression model is built by using generalized linear model in R (7). The family argument is a description of the error distribution and link function to be used in the model. For logistic regression model, the family is binomial with the link function of logit. For linear regression model, Gaussian distribution with identity link function is assigned to the family argument. The summary() function is able show you the results of the univariable regression. A P value of smaller than 0.25 and other variables of known clinical relevance can be included for further multivariable analysis. A cutoff value of 0.25 is supported by literature (8,9). The results of univariable regression for each variable are shown in Table 1. As expectedly, the variables age, hb and lac will be included for further analysis. The allowance to include clinically relevant variables even if they are statistically insignificant reflects the “part experience and common sense” nature of the model building strategy.

This step fits the multivariable model comprising all variables identified in step one. Variables that do not contribute to the model (e.g., with a P value greater than traditional significance level) should be eliminated and a new smaller mode fits. These two models are then compared by using partial likelihood ratio test to make sure that the parsimonious model fits as well as the original model. In the parsimonious model the coefficients of variables should be compared to coefficients in the original one. If a change of coefficients (∆β) is more than 20%, the deleted variables have provided important adjustment of the effect of remaining variables. Such variables should be added back to the model. This process of deleting, adding variables and model fitting and refitting continues until all variables excluded are clinically and statistically unimportant, while variables remain in the model are important. In our example, suppose that the variable wbc is also added because it is clinically relevant.

The result shows that P value for variable wbc is 0.408, which is statistically insignificant. Therefore, we exclude it.

All variables in model2 are statistically significant. Then we will compare the changes in coefficients for each variable remaining in model2.

The function coef() extracts estimated coefficients from fitted model. The fitted model2 is passed to the function. Because there is coefficient for wbc in model1, which has nothing to compare with in model2, we drop it by using “[-4]”. The result shows that all variables change at a negligible level and the variable wbc is not an important adjustment for the effect of other variables. Furthermore, we will compare the fit of model1 and model2 by using partial likelihood ratio test.

The result shows that the two models are not significantly different in their fits for data. In other words, model2 is as good as model1 in fitting data. We choose model2 for the principal of parsimony. Alternatively, users can employ analysis of variance (ANOVA) to explore the difference between models.

The results are exactly the same. Because of our simple example, we do not need to cycle the process and we can be confident that the variables hb, age and lac are important for mortality outcome. At the conclusion of this step we obtain a preliminary main effects model.

In the step, continuous variables are checked for their linearity in relation to the logit of the outcome. In this article, I want to examine the smoothed scatter plot for the linearity.

The smoothed scatter plots show that variables age, lac and hb are all linearly associated with mortality outcome in logit scale (Figure 1). The variable wbc is not related to the mortality in logit scale. If the scatterplot shows non-linearity, we shall apply other methods to build the model such as including 2 or 3-power terms, fractional polynomials and spline function (10,11). 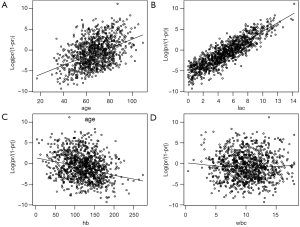 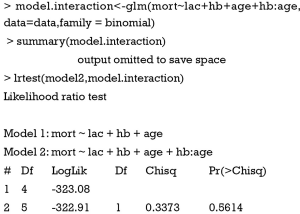 Note that I use the “:” symbol to create an interaction term. There are several ways to make interaction terms in R (Table 2). The results show that the P value for interaction term is 0.56, which is far away from significance level. When the model with interaction term is compared to the preliminary main effects model, there is no difference. Thus, I choose to drop the interaction term. However, if there are interaction effects users may be interested in visualizing how the effect of one variable changes depending on different levels of other covariates. Suppose we want to visualize how the probability of death (y-axis) changes across entire range of hb, stratified by age groups. We will plot at age values of 20, 40, 60 and 80. 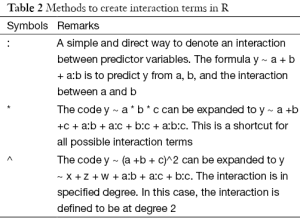 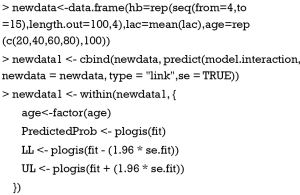 The first command creates a new data frame that contains new patients. Variables of each patient are artificially assigned. Variable hb is defined between 4 and 15, with a total of 100 patients at each age group. lac is held at its mean value. The next line applies the fitted model to the new data frame, aiming to calculate the fitted values in logit scale and relevant standard error. The plogis() function transforms fitted values into probability scale, which is much easier to understand for subject-matter audience. Lower and upper limits of the confidence intervals are transformed in similar way. The continuous variable age is transformed into a factor that will be helpful for subsequent plotting.

The result is shown in Figure 2. Because there is no significant interaction the lines are parallel. While the probability of death increases with increasing age, increasing hb is associated with decreasing mortality rate. 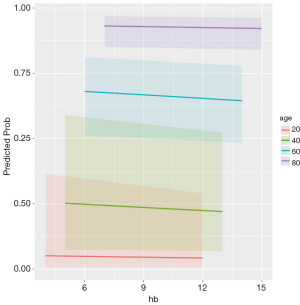 Figure 2 Effect of hb on the probability of mortality, stratified by different age groups.

The final step is to check the fit of the model. There are two components in checking for model fit: (I) summary measures of goodness of fit (GOF) and; (II) regression diagnostics. The former uses one summary statistics for assessment of model fit, including Pearson Chi-square statistic, deviance, sum-of-square, and the Hosmer-Lemeshow tests (12). These statistics measure the difference between observed and fitted values. Because Hosmer-Lemeshow test is the most commonly used measure for model fit, I introduce how to perform it in R.

The P value is 0.8, indicating that there is no significant difference between observed and predicted values. Model fit can also be examines by graphics. 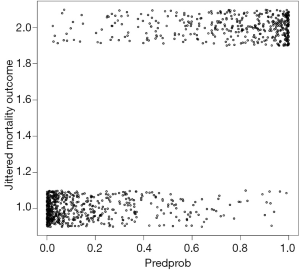 Figure 3 The plot of jittered outcome (alive=1; die=2) versus estimated probability of death from fitted model. 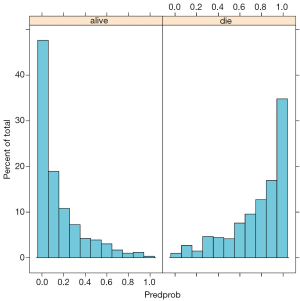 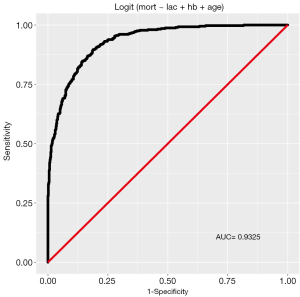 The article introduces how to perform model building by using purposeful selection method. The process of variable selection, deleting, model fitting and refitting can be repeated for several cycles, depending on the complexity of variables. Interaction helps to disentangle complex relationship between covariates and their synergistic effect on response variable. Model should be checked for the GOF. In other words, how the fitted model reflects the real data. Hosmer-Lemeshow GOF test is the most widely used for logistic regression model. However, it is a summary statistic for checking model fit. Investigators may be interested in whether the model fits across entire range of covariate pattern, which is the task of regression diagnostics. This will be introduced in next article.