Vitamin D receptor (VDR), one of the members of the steroid hormone receptor superfamily, is a ligand dependent transcription factor (1). After the active vitamin D3 form 1α,25(OH)2 D3 is combined with VDR, VDR becomes activated and begins to recruit many transcription factors, subsequently, it regulates the downstream gene transcription and expression (2). The synthetic novel 1,25-dihydroxy vitamin D3 analogue EB1089 has strong antiproliferative properties against a variety of malignant cells in vitro and in vivo. Its calcemic action is not as strong as 1,25-dihydroxyvitamin D3 [1,25(OH)2 D3], but its antiproliferative action is stronger. It has also been shown that EB1089 is also less effective than 1,25(OH)2 D3 in intestinal induction, but not the messenger RNA (mRNA) of renal calbindin-D9k (3,4). As a VDR agonist, EB1089 is more effective than vitamin D in anti-inflammatory function (5,6). The function of VDR is closely related to intestinal inflammation. The VDR knockout mice showed a stronger response to DSS, more severe colonic ulceration, and poorer wound healing than normal mice did (7). It has been reported that when VDR is activated, the expression of tight junction proteins in intestinal epithelial cells is up-regulated, and the permeability of intestinal epithelial cells is reduced, thereby minimizing the susceptibility of intestines to pathogens (8,9). We found that the expression of VDR and the number of CD4+ T cells in the peripheral blood of UC patients significantly decreased, while the expression of interleukin-4 (IL-4) significantly increased compared with that of healthy people, CD4+ T cells of VDR knockout mice easily differentiated into Th2 cells, and EB1089 promoted the transformation of CD4+ T cells to Treg cells in UC patients (10). It has been reported that VDR in CD4+ T cells could bind to NLRP3 inflammasome and reduce IL-4 expression (11). In macrophages induced from bone marrow, VDR binding to NLRP3 inhibits the deubiquitination of NLRP3 and promotes the ubiquitination degradation of inflammatory bodies; furthermore, vitamin D treatment decreases the expression of interleukin-1β (IL-1β) and mature caspase-1 in macrophages (12). Therefore, EB1089 may reduce intestinal inflammation through VDR.

In our study, we explored the anti-inflammatory effects of EB1089 on lipopolysaccharide (LPS)-induced inflammatory responses in the intestinal epithelial cell line HT-29 and the activation of NLRP3/caspase-1 and TLR4/NF-κB inflammatory pathways. This study could provide an experimental basis and theoretical support for using EB1089 in the treatment of UC and other intestinal inflammation-related diseases. We present the following article in accordance with the MDAR reporting checklist (available at https://atm.amegroups.com/article/view/10.21037/atm-22-1066/rc).

CCK-8 (Beyotime, Shanghai, China) was used to analyze cell viability. The cells were collected and incubated in a 96-well plate (5×103 cells/well) with a humidified incubator at 37 ℃ and 5% CO2 overnight. Then, add 10 µL of CCK-8 solution to each well. The optical density (OD)450 value was detected using an automatic microplate reader (WD-2102B, Beijing Liuyi Biotechnology Co., Ltd., Beijing, China). Cells from each group were detected with 6 repeated wells.

Apoptosis was detected using an AnnexinV-PI Analysis Kit (Beyotime Biotechnology, Shanghai, China) in accordance with the manufacturer’s instructions. These cells were inoculated in 6-well plate. They were collected, digested, and washed 3 times with ice-cold phosphate-buffered saline (PBS). Then, cells at a density of 1×106 cells/mL were collected and resuspended in 300 µL 1× of binding buffer. Afterward, 195 µL Annexin V-FITC, 5 µL Annexin V-FITC, and 10 µL propidium iodide (PI) were added according to the protocol of the kit. Pre-cooled 1× binding buffer (200 µL) was added after 10 min of incubation in a refrigerator in the dark at 4 ℃. The apoptosis rate was detected by flow cytometry. The results were analyzed by CELLQUEST software [Becton, Dickinson, and Co., (BD) Biosciences, Franklin Lakes, NJ, USA]. All tests were repeated 3 times.

The lactate dehydrogenase (LDH), interleukin 18 (IL-18), and IL-1β levels were detected using enzyme-linked immunosorbent assay (ELISA) kits in accordance with the instructions. The OD450 value was detected using an automatic microplate reader (WD-2102B, Beijing Liuyi Biotechnology Co., Ltd., China). Cells from each group were detected with 6 repeated wells. Calculate the linear regression equation of the standard curve according to the concentration and OD value of the reference material. Substitute the OD value of the sample into the equation to calculate the concentration of the sample, and then multiply it by the dilution ratio, that is, the actual concentration of the sample. 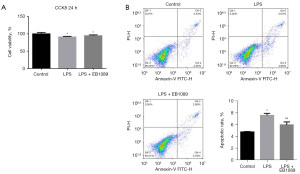 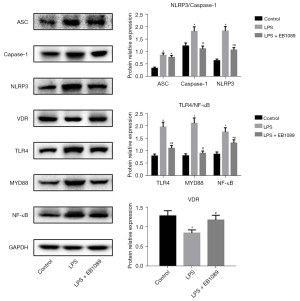 Toll-like receptor 4 (TLR4) is typical in the innate immune system of the human body. After recognizing pathogen-related molecules, the membrane pattern recognition receptors activate their cytoplasmic part and interact with the adaptor protein MyD88. Then, IL-1 receptor associated kinase-4 (IRAK-4) is recruited to activate the pathway, leading to the activation of MAPK and NF-κB; then, IRAK-4 enters the nucleus to regulate the transcriptional expression of downstream genes, and the expression of proteins constituting inflammatory bodies will also increase (13,14). A previous study a demonstrated that treatment with the active form of vitamin D (1,25(OH)D3) of colonic epithelial cells stimulated by LPS reduced tumor necrosis factor-α (TNF-α) and increased IL-10 (15). Typical inflammatory bodies include a cytoplasmic pattern recognition receptor (such as NLRP3), an adaptor protein (ASC), and pro-caspase-1. Inflammasome can process and activate caspase-1 and the pro-inflammatory cytokines IL-1β and IL-18 to induce an inflammatory response (16-18), so we detected IL-1β and IL-18 in this study. Our results indicated that EB1089 pretreatment significantly reduced the effect of LPS on the assembly of NLRP3 inflammasome in intestinal epithelial cells, and increased the VDR expression. Conversely, the LPS treatment significantly inhibited the VDR expression. It was reported that VDR promoted the ubiquitination of NLRP3 (12), so it could be speculated that EB1089 promoted the VDR expression and the degradation of inflammatory bodies in intestinal epithelial cells, resulting in the reduction of inflammatory response.

In this study, we also found that EB1089 pretreatment restored the expression of TLR4, MyD88, NF-κB, and other proteins to normal levels. This result indicated that the TLR4/NF-κB pathway was also activated by inflammasome-induced inflammatory responses. The increased IL-1β secretion triggered by the increased assembly of inflammasomes activated the downstream NF-κB through the IL-1R receptor combined with MyD88 (19). In brain tissues, activation of the inflammasome is associated with seeding and spreading of amyloid-β pathology, NLRP3 inflammasome activity also leads to the release of assembled ASC specks, which, once released into the intercellular space, could be taken up by neighboring myeloid cells to maintain the ongoing immune response (20). In the present study, the EB1089 pretreatment had no significant effect on the secretion of IL-1β and IL-18. The expression of ASC did not significantly differ between the LPS and LPS + EB1089 groups. Therefore, EB1089 directly inhibited the TLR4/NF-κB pathway by activating VDR.

In summary, this study demonstrated that the EB1089 pretreatment reduced LPS-induced inflammatory response in intestinal epithelial cells. The mechanism of this effect might involve the inhibitory effect of EB1089 against NLRP3 inflammasome formation and the TLR4/NF-κB pathway activity by promoting VDR expression. Therefore, EB1089 could elicit a therapeutic effect on UC and other intestinal inflammatory diseases.

Reporting Checklist: The authors have completed the MDAR reporting checklist. Available at https://atm.amegroups.com/article/view/10.21037/atm-22-1066/rc

Conflicts of Interest: All authors have completed the ICMJE uniform disclosure form (available at https://atm.amegroups.com/article/view/10.21037/atm-22-1066/coif). The authors have no conflicts of interest to declare.