According to a report from the World Health Organization (WHO), the annual incidence of tuberculosis (TB) is about 10 million worldwide and China accounts for 9% of all the cases globally. Although the total number of deaths from TB is decreasing globally, it remains one of the top 10 causes of death worldwide (1). Isoniazid (INH), rifampicin (RFP), ethambutol (EMB), and pyrazinamide (PZA) are the most commonly used first-line anti-TB drugs in clinical practice (2). The efficacy of anti-TB drugs is influenced by several factors, including the metabolic status of the tubercle bacilli in the lesion(3), drug resistance, comorbidities (4), drug dose, and serum drug concentration (5). Substandard plasma concentration can lead to bacterial drug resistance (6), disease relapse, or treatment failure (7). It has been reported that about 46% of TB patients failed to achieve sufficient serum concentration of at least one anti-TB drug, and the factors that contribute to substandard blood levels include drug dose, acetyl INH/INH ratio, and creatinine clearance (8). A small sample size (69 patients) (8), lack of multivariate analysis (only univariate analyses) (9,10) have been found in previous studies on the factors influencing the plasma concentration of anti-TB drugs. Factors affecting blood concentration of antituberculosis drugs have not been elaborated clearly.

The purpose of this study was to investigate the plasma concentration status of 4 first-line anti-TB drugs and to explore the determinants of anti-TB drug plasma concentration through multiple linear regression analysis, with an aim to guide rational clinical use, optimize individual patient doses, reduce the drug resistance of anti-TB drugs, and improve the cure rate of TB. We present the following article in accordance with the STROBE reporting checklist (11) (available at https://atm.amegroups.com/article/view/10.21037/atm-22-1341/rc).

This single-center retrospective cohort study was conducted in accordance with the Declaration of Helsinki (as revised in 2013) (12). Patient informed consent was waived due to the retrospective nature of the study, and the study was approved by the Medical Ethics Committee of the 309th Hospital of the Chinese People’s Liberation Army (PLA). (No. 201607110904). The Medical Support Center of the PLA General Hospital serves all medical centers affiliated, including 309 Hospital.

The inclusion of the potential factors associated with anti-tuberculosis plasma concentration was based on clinical relevance and previous reports (8-10).

The primary study endpoint was factors affecting the plasma concentration of anti-TB drugs. The secondary endpoint was the qualified rate of plasma concentration. All anti-TB drugs were administered on an empty stomach. Venous blood was drawn from patients 2 hours after dosing. Afterwards, the peak concentrations of the 4 drugs (INH, RMP, EMB, and PZA) were measured (13). Evidence from a previous study suggested that INH, RMP, EMB, and PZA reach peak serum concentrations approximately 2 hours after ingestion (13). According to the reference range recommended by the 2021 Expert Consensus on the Clinical Use of Drug Monitoring for Anti-TB Drug Therapy (14), low 2-hour blood levels are defined as follows: INH <3 µg/mL; RMP <8 µg/mL; PZA <20 µg/mL; and EMB <2 µg/mL.

Continuous variables conforming to a normal distribution were expressed as mean ± standard deviation (mean ± SD), otherwise median (IQR) was used to express non-normally distributed variables, and comparisons between two groups were performed by the independent samples t-test and non-parametric Mann-Whitney U rank sum test, respectively. Categorical variables were expressed as percentages, and comparisons among groups were performed by the Chi-square test or Fisher’s exact probability test. The missing data were handled by mean imputation method. The comparisons were conducted between groups with different gender, whether or not initial therapy, and whether or not with comorbidities.

First, a univariate analysis was performed. Subsequently, multivariate analysis was conducted by using a multiple linear regression model (16). Multicollinearity test was performed before variables were included into the model (17), and variables with variance inflation factor (VIF) greater than 10 were excluded. Then, the variables were screened by stepwise selection, and the variables included in the final model were independent factors. A P value (two side) <0.05 was considered as statistically significant. All statistical analyses were performed by MedCalc Statistical Software version 19.0.4 (MedCalc Software bvba, Ostend, Belgium; https://www.medcalc.org; 2019).

Baseline characteristics of the included patients

A total of 305 patients with pulmonary TB were treated with 4 first-line anti-TB drugs during the study period. Patients were screened in accordance with the inclusion and exclusion criteria, and 205 patients were finally enrolled (Figure 1). The median age of the included patients was 26 (IQR, 21–38.5) years, with 151 (73.7%) males and 31 patients (15.1%) on repeat treatment. The doses taken by the included patients are summarized in Table 1. The EMB median dose of 1 (IQR, 0.75–1) g did not reach the target dose range, while the median doses of the remaining 3 drugs were in the target range. The substandard rates of patients with 2-hour plasma concentrations for INH, rifampin, EMB, and PZA were 45.8%, 54.4%, 37.7%, and 52.9%, respectively. The baseline characteristics of the included patients are shown in Table 2. 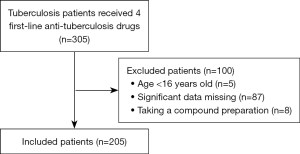 Demographic and clinical characteristics of the included patients

Results of the multivariate analysis

*, the t value is used to judge the significance of each independent variable. If significant, it indicates that the variable has a significant impact on the model. INH, isoniazid; RFP, rifampicin; EMB, ethambutol; PZA, pyrazinamide; VIF, variance inflation factor.

In a study conducted by Um et al. (8) in 2007, 69 patients with pulmonary TB were included and the factors influencing the 2-hour plasma concentration of anti-TB drugs were analyzed by multiple linear regression models. The results showed that drug dose was positively correlated with the plasma concentration, which is consistent with the results of the present study, indicating that the insufficient dose is an important factor that leads to substandard blood drug concentration. INH is generally administered orally. However, it can be administered intramuscularly or intravenously in critically ill patients (20). Our study found that intravenous administration significantly increased plasma concentrations compared with oral administration, which may be attributed to the effect of food and the first-pass effect of the liver (21). A large number of previous studies have shown that anti-TB drugs can affect uric acid metabolism in humans, which could result in elevated blood uric acid (22-24). The mechanisms of the interaction between blood uric acid and anti-TB drug metabolism need to be further investigated.

The study showed a positive correlation between RFP plasma concentrations and serum albumin levels, which may be attributed to the albumin binding rate of the drug. A previous study had reported an albumin binding rate of 70–80% for RFP (25), which was higher than other first-line anti-TB drugs. These results suggest that serum albumin is an important factor affecting the serum concentration of RFP, most likely because hypoalbuminemia leads to more clearance of unbound RFP by the liver (26). The relationship between albumin and RFP plasma concentrations in this study is consistent with a previous study (27), and is also in line with the results of a pharmacokinetic study for RFP (28). Future studies are warranted to focus on the relationship between serum total drug concentration and free drug concentration of RFP.

Two previous studies indicated that the 2-hour plasma concentrations of PZA were significantly higher in female patients than in male patients (8,27), which is consistent with the results of the present study. The mechanism of the discrepancy in plasma concentration of anti-tuberculosis drugs between genders needs further studies. The univariate and multivariate analyses in this study showed that plasma concentrations of PZA were positively correlated with dose and total serum bilirubin levels, which was consistent with previous report (29). When total bilirubin levels are elevated, it indicates that the liver is less able to clear both bilirubin and anti-TB drugs, so blood drug concentration levels may be increased concurrently. When liver function was impaired, PZA doses could be reduced appropriately. Blood urea nitrogen was elevated in response to impaired renal function, which was similar to serum creatinine, while 4–14% of PZA is excreted in urine in prototype form after administration (30), and this may account for the negative correlation between plasma concentrations of PZA and blood urea nitrogen.

Limitations of the study

First, this was a retrospective study. Therefore, there was an insufficient causal relationship between the included variables and drug concentrations, which should be validated in a prospective randomized controlled study. Second, the study excluded a large number of patients with missing data and only analyzed patients with complete data, which may lead to bias. Third, this study did not analyze the relationship between drug concentration, efficacy and patients prognosis, so future studies in this field should expand the endpoints. Fourth, a single time point of 2 hours was used for the determination of plasma concentrations in the study, which may miss the actual peak concentration. Lastly, this single-center study did not have sufficient generalizability of the findings.

Funding: This work was supported by the Capital Clinical Characteristic Application Research of China (No. Z141107002514023).

Reporting Checklist: The authors have completed the STROBE reporting checklist. Available at https://atm.amegroups.com/article/view/10.21037/atm-22-1341/rc

Conflicts of Interest: All authors have completed the ICMJE uniform disclosure form (available at https://atm.amegroups.com/article/view/10.21037/atm-22-1341/coif). The authors have no conflicts of interest to declare.

Ethical Statement: The authors are accountable for all aspects of the work in ensuring that questions related to the accuracy or integrity of any part of the work are appropriately investigated and resolved. The study was conducted in accordance with the Declaration of Helsinki (as revised in 2013). The study was approved by the Medical Ethics Committee of the 309th Hospital of the Chinese People’s Liberation Army (PLA) (No. 201607110904) and individual consent for this retrospective analysis was waived.