Otosclerosis, a progressive disease caused by genetic and inflammatory influences (1,2), develops within the inner ear’s bony labyrinth and is characterized by a pathological bone remodeling that could lead to stapes footplate fixation and progressive conductive hearing loss (HL) (3-5).

Middle ear implants, pharmacological therapies, and stapes surgeries could be considered for treating otosclerosis (5). However, middle ear implants and pharmacological therapies are not widely accepted due to controversial outcomes (6-8). Stapedotomy is currently considered the gold standard surgical treatment for otosclerosis (9). Shiao et al. and Babighian et al. demonstrated significant improvement in average air conduction (AC) and air-bone gap (ABG) (P<0.001) and no difference in bone conduction (BC) after surgery were reported in their cases (10,11). In their study, Roychowdhury et al. reported that low-frequency (LF) AC and ABG improved significantly more after stapedotomy than high-frequency (HF) AC and ABG (12).

Endoscopic stapedotomy has the advantages of a wide field of view and better visualization of the structures in the middle ear, which leads to reduced rates of removal of the scutum or injury to the chorda tympani, as well as lower pain scores and a lower incidence of dysgeusia in patients (15-17).

The 1-hand technique, heating effects of the endoscope’s light, and lack of stereoscopic view are limitations of endoscopic stapes surgery (ESS) method and can sometimes cause surgical trauma to the chorda tympani and other structures in the middle ear which were supposed to be preserved, such as the malleus and the incus (18-20).

The aim of the present study was to analyze and compare the audiological outcomes (AC, BC, ABG) in different frequencies (LF, MF, and HF) between 2 cohorts of patients with otosclerosis undergoing ESS or microscopic stapes surgery (MSS), and to investigate which of these could be an efficient surgical indicator for future clinical use. We present the following article in accordance with the STROBE reporting checklist (available at https://atm.amegroups.com/article/view/10.21037/atm-22-1252/rc).

The integrity of descriptive and preoperative and postoperative audiological data determined the sample size of this cohort study. Sixty-five otosclerosis patients who underwent either ESS (n=30) or MSS (n=35) between April 2017 and April 2021 at Sun Yat-Sen Memorial Hospital, Sun Yat-Sen University, China, were included in the present study. Otosclerosis diagnoses were based on a history of progressive conductive or mixed HL, a mean HL ≥25 dB in the range of 0.25–4 kHz, and normal otoscopic findings. Exclusion criteria were as follows: patients who had had former ear surgeries, malformation of the ossicular chain, any other causes for stapes footplate fixation, and absence of follow up, which reduced the potential bias as much as we could. Among the 65 patients, 5 reported no tinnitus before and after ESS, and 6 patients reported no tinnitus before and after MSS. The study was conducted in accordance with the Declaration of Helsinki (as revised in 2013). The study was approved by institutional ethics board of Sun Yat-Sen Memorial Hospital (No. SYSEC-KY-KS-2022-120), and informed consent was not required because this was a cohort and retrospective study, and all data were collected after the patients were discharged.

We searched the medical record system for the medical records of diagnosed otosclerosis patients, and we documented the types of surgery they underwent, and their sex, age, side of affected ear, operating side.

Auditory gains were calculated from preoperative and postoperative audiograms, and are shown as Δs.

All surgeries were performed under general anesthesia. ESS was performed using a 3-mm diameter, 0° rigid endoscope with a high-definition camera and monitor. An incision was made in the posterior external ear canal, then the tympanomeatal flap was lifted. Attachment of the tympanic membrane to the malleus and to the chorda tympani was preserved. Atticotomy was performed for better exposure of the oval window region. After dislocation of the incudostapedial joint, the stapedius tendon and the posterior crus were divided by microscissors. The distance between the long prominence of the incus and footplate was measured, and then a fenestration was created in the footplate by a handheld microperforator. The ideal-sized prosthesis was inserted into the fenestration, and the hook was crimped on the long prominence of the incus. The footplate was sealed by blood. The tympanomeatal flap was then replaced, and the external auditory canal was packed with gelatin foam. MSS was performed similarly to ESS, with the exception of an endaural skin incision being made.

Statistical analyses were performed using SPSS version 26.0 (IBM, Armonk, NY, USA). First, we verified that our audiological data of the two groups were normally distributed using normality test. Then, we used independent sample t-tests to compare the preoperative hearing parameters between the groups to verify if the 2 groups could be considered homogeneous so that we could continue with the following statistical analyses. Associations between hearing outcomes and clinical data were analyzed using paired sample t-tests (comparisons of preoperative and postoperative audiological parameters), independent-sample t-tests (comparisons of auditory gains), Mann-Whitney U-tests, and χ2-tests (comparison of surgery success rates) and linear regression tests (associations between preoperative audiological parameters and their changes). Data are expressed as mean, standard deviation of the mean, and percentages. P≤0.05 was considered statistically significant and was two-sided. Bar charts and line graphs were made using SPSS version 26.0 and GraphPad version 9.0, respectively.

Descriptive data of the 65 patients

Preoperative PTA tests were performed <4 weeks before surgery, whereas postoperative testing was performed from 1 to 14 months (average: 3 months) after surgery, depending on patients’ adherence to surgeons’ instructions that they should go to outpatient for follow-up checks and tests 1 month, 3 months and 6 months each, after surgery. 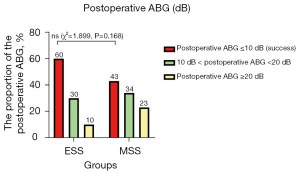 Table 5 shows the averages of the auditory gains of different frequencies of both groups, and the comparative measures between both types of surgeries. Auditory gain was defined as the difference of value between preoperative and postoperative audiological parameters. There were no significant differences in terms of AC-LF, BC-LF, ABG-LF, AC-MF, BC-MF, ABG-MF, AC-HF, BC-HF, ABG-HF, AC-PTA, and ABG-PTA (P>0.05), but the MSS group demonstrated better results for BC-PTA (P=0.049). 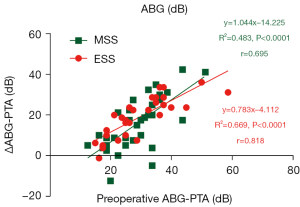 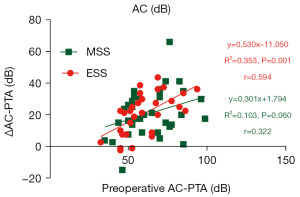 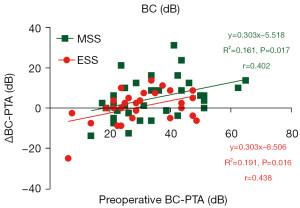 Our analysis of the HL data for the 2 patient cohorts before and after ESS and MSS showed satisfactory and comparatively functional results. There were no significant differences in preoperative hearing between the 2 groups (P>0.05), indicating that the 2 cohorts could be considered homogeneous.

In the evaluation of successful stapes surgery, postoperative ABG <10, 15, 20, and 34.5 dB have been reported and accepted in previous studies, with 10 dB considered the most accepted standard (21-26).

Moreover, greater LF and MF auditory gains were shown in both groups in terms of AC and ABG than HF auditory gains. In contrast, auditory gains of BC-MF were significantly greater than the auditory gains of BC-LF and BC-HF in the ESS group (P>0.05). There were no significant differences among BC-LF, BC-MF, and BC-HF in the MSS group. Similarly, Roychowdhury et al. found that ABG-LF improved significantly more than ABG-LF after stapedotomy (12), and presented a simple linear regression model demonstrating that ΔAC (y) decreases as the frequency (x) increases [y=–0.003853x+34.76 (R2=0.951), P<0.001], and indicated that there was no significant difference between preoperative and postoperative thresholds at 8 kHz. One hypothesis could be that the surgical wound is on the vestibular window and HF soundwaves cause vibrations only on the basement membrane around the vestibular window, therefore LF and MF data have better post-stapedotomy outcomes than HF.

The findings of our study indicate that postoperative audiological outcomes, surgery success rates, and audiological changes between both types of surgeries are comparable, except for changes in BC-PTA, which favored the MSS group. MSS also improved BC-LF and BC-HF. Moreover, shifts in ABG and BC were linearly related to preoperative ABG and BC in both groups, and shifts in AC were linearly related to preoperative AC in the ESS group (P<0.05). Based on linear regression analysis, preoperative ABG-PTA was the most efficient surgical indicator for both types of stapes surgery for patients with otosclerosis. We propose that ESS could be a more effective alternative treatment for HL caused by otosclerosis, and preoperative ABG-PTA could work as a useful clinical indicator for therapeutic choices.

Reporting Checklist: The authors have completed the STROBE reporting checklist. Available at https://atm.amegroups.com/article/view/10.21037/atm-22-1252/rc

Conflicts of Interest: All authors have completed the ICMJE uniform disclosure form (available at https://atm.amegroups.com/article/view/10.21037/atm-22-1252/coif). The authors have no conflicts of interest to declare.

Ethical Statement: The authors are accountable for all aspects of the work in ensuring that questions related to the accuracy or integrity of any part of the work are appropriately investigated and resolved. The study was conducted in accordance with the Declaration of Helsinki (as revised in 2013). The study was approved by institutional ethics board of Sun Yat-Sen Memorial Hospital (No. SYSEC-KY-KS-2022-120), and informed consent was not required because this was a cohort and retrospective study, and all data were collected after the patients were discharged.