The early stage of lung cancer often has no obvious clinical symptoms and mainly manifests as peripheral pulmonary nodules (PPNs), which are observable in chest computed tomography (CT) scans. The early diagnosis of lung cancer is the main means by which the 5-year survival rate can be approved (1,2). With the expansion of the clinical application of chest CT examinations, the detection rate of PPNs has increased significantly. A technique urgently needs to be developed to improve the positive diagnosis rate of PPN. CT-guided lung biopsy is an important means for PPN diagnosis, but it has high complications, such as pneumothorax, hemorrhage, and gas embolism (3). In recent years, the clinical application of guided bronchoscopy, including ultra-bronchoscope, endobronchial ultrasound (EBUS), virtual bronchoscope navigation (VBN), and electromagnetic navigation (ENB), combined with transbronchial lung biopsy (TBLB) has significantly increased the diagnostic yield of PPNs, however tissues from PPLs obtained by TBLB are generally small, and the positive rate of diagnosis needs to be further improved (4-6). Transbronchial cryo-biopsy (TBCB) has been widely used in the clinical diagnosis of interstitial lung disease and peripheral pulmonary lesions (PPLs) with high safety and tolerability and can obtained larger tissue specimens than that obtained by TBLB (7-11), but there are few reports on the use of TBCB in the diagnosis of PPNs. This study sought to investigate the diagnostic yield of VBN combined with rEBUS-guided TBCB for PPN and expect to explore a new diagnostic method for PPNs. We present the following article in accordance with the CONSORT reporting checklist (available at https://atm.amegroups.com/article/view/10.21037/atm-22-1231/rc).

The study was conducted in accordance with the Declaration of Helsinki (as revised in 2013). This study was approved by institutional ethics committee of Zhoukou Central Hospital (No. 20190905006) and informed consent was taken from all the patients. This study is a prospective, randomized and two-parallel study, and allocation ratio was closed to 1:1. Patients with PPNs were enrolled who were required to undergo bronchoscopy to confirm the diagnosis in Henan Provincial People’s Hospital and Zhoukou Central Hospital from January 1, 2020 to December 31, 2020. The Henan Provincial People’s Hospital was informed and agreed with this study. The enrolled patients were divided into the TBCB group (experimental group) and the TBLB group (control group) using the block randomization method. The primary endpoint was the diagnostic yield of PPNs, and the secondary endpoints included the incidence of complications, operation time and specimen surface area.

Object of the study

The baseline characteristics of the patients and target lesions were observed before the operation, including the age, gender, height, and weight of the patients, and the diameter, density, location, and distance from the parietal pleura of target lesion. The indexes, including the image features of the ultrasound localization of lesions, the results of the ROSE, the operation time of bronchoscopy, and the surface area of the biopsy specimens were observed.

The patients were followed-up on the first day after the operation, and any complications were recorded, including bleeding, pneumothorax, postoperative fever, and pain. The histopathology from the bronchoscopic biopsy results were recorded 1 week after the operation. The patients whose histopathology results were malignant were considered to have a conclusive diagnosis, and the study was terminated. For the patients whose histopathology results were benign, multi-disciplinary team (MDT) was performed. the patient whose PPN was considered malignant by MDT underwent surgery or CT-guided lung biopsy, and after the postoperative pathological results were recorded, the study was terminated. Meanwhile, the patient whose PPN was considered benign by MDT underwent the corresponding treatment and was followed-up. A thin-slice CT of the chest was executed after 1 month, 3 months, and 6 months, and CT imaging changes of the target lesions were recorded. During the follow-up, if the CT images of the lesions of the patient were absorbed or stable, the diagnosis by bronchoscopy was considered to be a conclusive diagnosis and the study was terminated; however, if the CT images indicated progression, surgery, or CT-guided lung biopsy was performed (see Figure 1).

SPSS 25.0 software was used for the statistical analysis. The measurement data are presented as the mean ± standard or median quartile distribution (skewness distribution), and differences between the groups were measured by the independent sample t-test or non-parametric test (skewness distribution). The counting data are presented as the number (percentage). The Chi-square or Fisher’s exact test was used for inter-group comparisons, and the Kappa test was used to evaluate the consistency of the two groups. For the test of normality of continuous variables, a two-sided P value of less than 0.05 was considered as statistically significant. 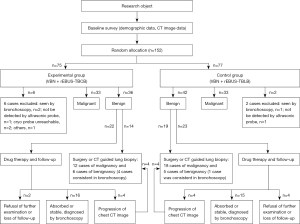 Comparison of TBLB and TBCB in the diagnosis of target lesions 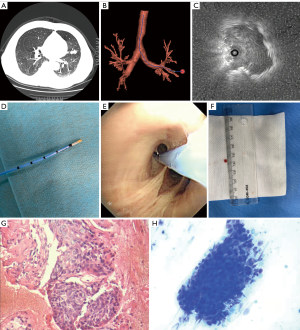 Comparison of the diagnostic yield between TBLB and TBCB 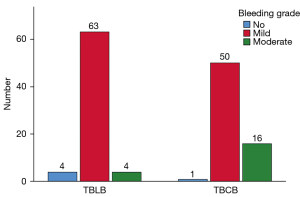 The diagnostic consistency of ROSE and histopathology 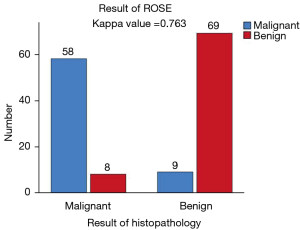 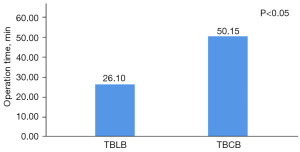 The small ultrasonic probe helped to locate and sample the lesions located in the distal bronchus, bronchioles, and alveoli. Combined with the characteristics of the lesions, the radial ultrasonic localization images of PPNs can be divided into the following 3 types: concentric, eccentric, and adjacent (10). VNB is a method for forming a 3D, virtual bronchial tree image, which is generated by importing chest CT data into a special system, and can guide the bronchoscope to the peripheral lung target lesions (14). Gupta et al. reported that the diagnostic yield of rEBUS-TBLB for PPN was about 60–70%, but when used in combination with VBN, the diagnostic yield reached 63.3–84% (15). In this study, VNB-rEBUS was used, and the total diagnostic yield was 73.9% (102/138). Similar to the findings of a previous study (15), in this study, the application of VNB-rEBUS combined with GS in the TBLB group resulted in a diagnostic yield of 70.4% (57/81).

Bleeding is the most common complication for TBCB. In a meta-analysis of 12 studies, moderate bleeding was observed after TBCB in 65 of 383 patients (16.9%), with an overall probability of 0.12 [95% confidence interval (CI): 0.02–0.25] (17). In addition to guiding the biopsy tool to the target lesion, EBUS can also detect whether there are large blood vessels in the biopsy area, and thus reduce the risk of bleeding (15). Schuhmann et al. performed 63 rEBUS-guided cryo-biopsies in 31 patients with PPL, and only 1 patient experienced moderate bleeding (11). In the study of TBCB application in PPL conducted by Imabayashi et al., mild bleeding occurred in 25 of 38 patients, but moderate bleeding occurred in only 1 patient. Additionally, 2 patients developed pneumothorax requiring catheterization, both of which were related to the close proximity of the patients’ lesions to the pleura (18). In this study, rEBUS was used in both groups, but the GS was only used in the TBLB group, and was not used in the TBCB group, as the GS could have prevented the cryo-probe from reaching target lesions; rather, a blocked balloon was used to prevent severe bleeding. The study showed that the incidence of moderate bleeding in the TBCB group was higher than that of the TBLB group (22.5% vs. 5.6%). No serious bleeding occurred in either group. Pneumothorax is another common complication of TBCB. A meta-analysis involving 13 studies on the application of cryotherapy in interstitial diseases showed that the incidence of pneumothorax after TBCB was 9.5% (95% CI: 5.9–14.9%) (19). In this study, there were 2 cases of pneumothorax in the TBLB group and 3 cases in the TBCB group, none of which underwent thoracic drainage.

The efficiency of TBCB is related to cryo-time, cryo-probe size, the nature of the target tissue, the local temperature, and other factors (20,21). Currently, two types of cryo-probes are commonly used (i.e., the 2.4- and 1.9-mm cryo-probes), and the cryo-time is 3–6 s. A few studies have shown that the TBCB specimens were significantly larger than the TBLB specimens used in the diagnosis of peripheral lung cancer, and the success yield of the later molecular pathological examinations was higher than that of the control group (22,23). To effectively reach the target lesions, the 1.9-mm probe was chosen in this study, and the cryo-time was 5 s. The results showed that the surface area of the TBCB specimens was larger than that of the TBLB specimens (0.234±0.031 vs. 0.102±0.023 cm2). To reduce the risk of surgery, TBCB was performed with a rigid bronchoscope or endotracheal intubation after general anesthesia, while TBLB was performed after sedation, which may be the main reason why the operation time of the TBCB group was significantly longer than that of the TBLB group (50.15±6.22 vs. 26.10±5.40 min).

ROSE provides on-site evaluations for specimens, quickly provides a preliminary diagnosis, and provides guidance on how to adjust the next steps to maximize the diagnostic yield. When ROSE was applied for the diagnosis of PPLs combined with rEBUS-TBLB, it improved the diagnostic yield and reduced the operation time (24). In this study, ROSE was applied for the preliminary diagnosis of the target lesions in both the groups. The results showed that the ROSEs and histopathology examinations were consistent in terms of the diagnosis of benign and malignant lesions (Kappa value =0.763).

However, it should be noted that this study had a number of limitations. First, the sample size of the enrolled patients was limited, and only 2 clinical hospitals participated in the study. Thus, the results need to be confirmed by more large-scale clinical studies. Second, the follow-up time was only 6 months, which is short, and some malignant PPNs remained unchanged during the follow-up period and were considered benign, which could affect the research results. Third, at present the factors affecting the diagnostic yield of TBCB for PPNs need to be examined further, including the diameter of cryo-probe and cryo-time. Additionally, the question of whether the diagnostic yield can be improved by using a cryo-probe with a diameter of 2.4 mm and extending the cryo-time needs to be further studied.

In conclusion, this study demonstrated that VBN-rEBUS-guided TBCB has a better diagnostic yield and safety for PPNs, especially for lesions with eccentric and adjacent ultrasound images and a diameter ≤2 cm. The specimens obtained by TBCB were significantly larger than those obtained by TBLB, which may be more conducive to subsequent molecular pathological examinations. The moderate bleeding rate of TBCB was higher than that of TBLB, but no serious complications were observed.

Funding: This study was supported by the Zhoukou Central Hospital Science and Technology Project (No. 20190101).

Reporting Checklist: The authors have completed the CONSORT reporting checklist. Available at https://atm.amegroups.com/article/view/10.21037/atm-22-1231/rc

Conflicts of Interest: All authors have completed the ICMJE uniform disclosure form (available at https://atm.amegroups.com/article/view/10.21037/atm-22-1231/coif). The authors have no conflicts of interest to declare.

Ethical Statement: The authors are accountable for all aspects of the work in ensuring that questions related to the accuracy or integrity of any part of the work are appropriately investigated and resolved. The study was conducted in accordance with the Declaration of Helsinki (as revised in 2013). This study was approved by institutional ethics committee of Zhoukou Central Hospital (No. 20190905006) and informed consent was taken from all the patients. The Henan Provincial People’s Hospital was informed and agreed with this study.