Atherosclerosis is a chronic inflammatory disease of the blood vessels and the main underlying cause of cardiovascular diseases, including stroke, myocardial infarction, and heart failure (1). Despite the pathogenesis of atherosclerosis remaining unclear, smoking, alcohol, hyperlipidemia, hypertension, and genetic factors have been widely accepted as risk factors of atherosclerosis (2-4). Under these stimulations, low-density lipoprotein (LDL) is converted to oxidized LDL (ox-LDL) within the arterial walls, inducing endothelial cell dysfunction, platelet adhesion and aggregation, macrophage-derived foam cell formation, and smooth muscle cell migration (5). Ox-LDL, but not native LDL, is able to induce the production and release of pro-inflammatory cytokines causing inflammatory responses in macrophages and leading to chronic inflammation (6).

Inflammation plays a crucial role in the pathogenesis of atherosclerosis. Recently, NLR family pyrin domain containing 3 (NLRP3) has been considered a key regulator of the inflammatory response in atherosclerosis (7,8). NLRP3 recognizes various pathogen- and damage-associated molecular patterns to form NLRP3 inflammasomes containing NLRP3, apoptosis-associated, speck-like protein containing a caspase-1 recruitment domain (ASC), and caspase-1 (7). Pro-IL-1β and pro-IL-18 are then cleaved to the inflammatory cytokines IL-1β and IL-18, ultimately leading to an inflammatory response (9). The inhibition of NLRP3 has been shown to be effective in treating atherosclerosis and cardiovascular diseases (8,10,11). In addition, the NF-κB signaling pathway has been identified as a primary molecular mechanism of NLRP3 inflammasome activation (12,13).

Oncostatin M (OSM) is a member of the IL-6 family of cytokines generated from activated T cells, monocytes, and dendritic cells. As a cytokine secreted in response to infections and tissue injury, OSM participates in various cellular processes, including cell proliferation, death, differentiation, and hematopoiesis (14). In addition, OSM has significant roles in regulating various inflammatory diseases, such as inflammatory bowel diseases (15,16), lung inflammation (17), sepsis (18), and allergic rhinitis (19). Inhibition of the initiation and progression of atherosclerotic lesions using anti-thrombin agents leads to the downregulation of OSM (20,21). In atherosclerotic lesions, OSM is highly expressed and contributes to the proliferation and migration of smooth muscle cells (22). Moreover, OSM is able to promote endothelial activation (23) and chronic inflammation by binding to its receptors (22,24). Several studies have presented the link between OSM and atherosclerosis (14-24). The deficiency of OSM receptor β attenuated ameliorated atherosclerotic burden by inhibiting JAK2/STAT3 pathway (25). However, the roles of OSM in the pathogenesis of atherosclerosis have not been exhaustively investigated, especially the role of OSM in foam cell formation.

In the present study, a human monocytic leukemia cell line THP-1 was used and stimulated with phorbol-12-myristate-13-acetate (PMA) to induce macrophage differentiation. THP-1 macrophages were then exposed to ox-LDL, which is commonly used for mimicking a cell model of atherosclerosis (26). The effects of OSM on foam cell formation and inflammation induced by ox-LDL were evaluated. Moreover, considering OSM has been reported to be effective in inducing NLRP3 inflammasome activation (27), we further studied the involvement of NLRP3 in the effects of OSM on atherosclerosis. The findings of this study may provide a better understanding of OSM in the pathogenesis of atherosclerosis. We present the following article in accordance with the MDAR reporting checklist (available at https://atm.amegroups.com/article/view/10.21037/atm-22-560/rc).

THP-1 macrophages were seeded in 6-well plates at a density of 2×105 cells/well. Following transfection and treatment, cells were washed twice with phosphate-buffered saline (PBS) and fixed with 4% paraformaldehyde for 30 minutes. The cells were stained with 0.5% Oil Red O (Sangon Biotech Co., Ltd., Shanghai, China) for 30 minutes at 23±2 ℃ and then incubated with 60% isopropanol for 10 seconds. The stained cells were photographed under a light microscope (Olympus, Tokyo, Japan). The intensity of the Oil Red O staining was detected at 540 nm under a microplate reader.

The OSM, TNF-α, IL-1β, IL-6, and IL-18 content in the supernatant of THP-1 macrophages was measured using the corresponding enzyme-linked immunosorbent assay (ELISA) kits (Abcam, Cambridge, MA, USA) according to the manufacturer’s instructions.

After transfection and treatment, the THP-1 macrophages in the 6-well plates were washed twice with PBS, fixed with 4% paraformaldehyde for 15 minutes, and incubated with 0.5% Triton X-100 for 20 minutes at 23±2 ℃. Normal goat serum was added to block the cells for 30 minutes. After removing the blocking solution, the cells were incubated with anti-NLRP3 primary antibody (1:300, catalog number: MA5-32255, Thermo Scientific, Rockford, IL, USA) overnight at 4 ℃ and with the secondary antibodies (1:500, catalog number: A32731, Thermo Scientific) for 1 hour at 37 ℃. Cell nuclei were stained by adding 4',6-diamidino-2-phenylindole (DAPI) for 5 minutes. The stained cells were photographed under a fluorescence microscope. 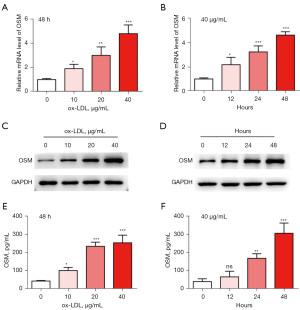 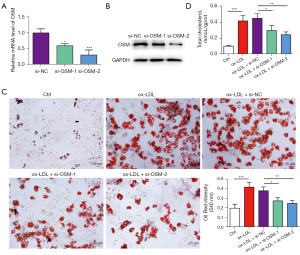 After the indicated transfection and treatment, the supernatant of THP-1 macrophages was collected for ELISA analysis. The levels of TNF-α, IL-1β, IL-6, and IL-18 were significantly increased by ox-LDL treatment (P<0.05, Figure 3A-3D). Transfection of cells with OSM siRNAs significantly inhibited cytokine levels in contrast to transfection with si-NC (P<0.05). The protein levels of TNF-α, IL-1β, IL-6, and IL-18 were upregulated by ox-LDL in THP-1 macrophages (Figure 3E). OSM siRNAs inhibited the effects of ox-LDL on the protein expression of cytokines in contrast to si-NC. These data indicated that silencing OSM inhibited ox-LDL-induced cytokine release from THP-1 macrophages. 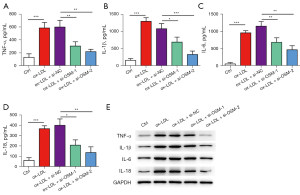 The underlying mechanisms of OSM in the event of atherosclerosis were then detected. Western blot analysis (Figure 4A) showed that ox-LDL causes significant upregulation of NLRP3 and phosphorylated p65. Transfection of cells with OSM siRNAs repressed the activation of NLRP3 and p65, in contrast to si-NC transfection. Immunofluorescence results indicated a remarkably high expression of NLRP3 in ox-LDL-treated THP-1 macrophages (Figure 4B). In contrast to si-NC transfection, transfection of cells with OSM siRNAs inhibited NLRP3 expression induced by ox-LDL. Moreover, cleaved caspase-1 (p20), ASC, and GSDMD-N were all upregulated by ox-LDL (Figure 4C). In contrast to si-NC, OSM siRNAs remarkably inhibited the highly expressed caspase-1 (p20), ASC, and GSDMD-N. 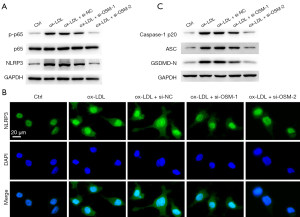 To further explore whether OSM exerted its effects via the regulation of NLRP3, an pcNLRP3 was transfected into THP-1 macrophages alone or in combination with OSM siRNA (si-OSM-2). Results indicated that mRNA and protein levels of NLRP3 were downregulated by OSM siRNA (P<0.05, Figure 5A) and upregulated by pcNLRP3 transfection (P<0.05, Figure 5B). Transfection of cells with pcNLRP3 significantly reversed the effects of OSM siRNA on lipid accumulation. In contrast to the si-OSM + pcDNA3.1 group, the Oil Red O staining levels and total cholesterol content were significantly increased in the si-OSM + pcNLRP3 group (P<0.05, Figure 5C,5D). These results indicated that silencing OSM inhibited foam cell formation, possibly via the inhibition of NLRP3 inflammasome activation. 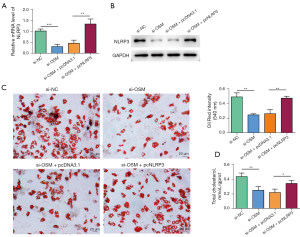 Silencing OSM inhibits inflammation via the inhibition of NLRP3 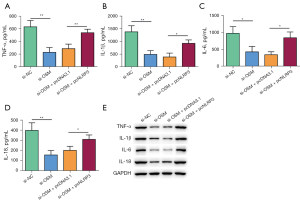 Atherosclerosis is characterized by an imbalance in lipid metabolism, the accumulation of macrophage-derived foam cells, and inflammation of the artery walls (28). Macrophages play significant roles in atherosclerosis by participating in all stages of the disease progression (29). In the early stages of atherosclerosis, endothelial cells release chemokines to recruit monocytes and then induce macrophage differentiation. The macrophages further uptake ox-LDL and form foam cells, causing cell death and inflammation, which ultimately lead to plaque formation and instability. In the present study, THP-1 cells were treated with PMA to induce macrophage differentiation. THP-1 macrophages were exposed to ox-LDL to mimic a cell model of atherosclerosis. We found that OSM was highly expressed in the THP-1 macrophages following treatment with ox-LDL. The upregulation of OSM was time- and dose-dependent. The high expression of OSM in the cell model was consistent with several previous findings (20-22), suggesting a link between OSM and atherosclerosis. Silencing OSM expression by siRNA transfection significantly inhibited ox-LDL-induced foam cell formation, as evidenced by the decrease in the total cholesterol content and Oil Red staining levels. Silencing OSM inhibited ox-LDL-induced inflammation, as the production and release of TNF-α, IL-1β, IL-6, and IL-18 from THP-1 macrophages were significantly repressed. In addition, silencing OSM inhibited the ox-LDL-induced p65-NLRP3 signaling pathway. The effects of OSM silencing on ox-LDL-induced pathologic changes could be significantly reversed by NLRP3 overexpression. These data collectively suggested that OSM plays a role in inducing atherosclerosis by activating NLRP3 inflammasomes.

OSM, together with IL-6, IL-11, IL-31, and leukemia inhibitory factor (LIF), are members of the IL-6 family cytokines. All of them play essential roles in the immune system through cell communication and cell signaling pathways (30,31). OSM has garnered much interest due to its involvement in various inflammatory diseases. For instance, blockading OSM attenuated intestinal inflammation in an animal model of colitis (15). The administration of recombinant OSM protein in septic mice led to an increase in inflammatory tissue injury and a higher mortality rate (18). In C57Bl/6 mice, OSM induced lung inflammation by elevating IL-33 expression (17). OSM has been considered as a potential target for type 2 inflammatory diseases (32). In the present study, OSM was found to be critical in promoting the initiation and progression of atherosclerosis. OSM was highly expressed in ox-LDL-treated THP-1 macrophages in both a time- and dose-dependent fashion. Silencing OSM was effective in inhibiting ox-LDL-induced foam cell formation and inflammation in THP-1 macrophages. The effects of OSM on atherosclerosis with regard to smooth muscle cell migration (22), endothelium dysfunction (23), and chronic inflammation (22,24) have been previously reported. However, to our knowledge, this is the first study to explore the effects of OSM on promoting macrophage-derived foam cell formation.

NLRP3 plays a significant role in regulating the inflammatory response during atherosclerosis. It can be activated by various stimuli, including microbial infection, reactive oxygen species, high glucose, hypoxia, and particulate matter (13,33,34). In atherosclerotic lesions, NLRP3 can be activated by ox-LDL and cholesterol crystals (35). The activated NLRP3 forms an inflammasome complex together with ASC and caspase-1 and then cleavages pro-IL-1β and pro-IL-18 to contribute to a vascular inflammatory response. In this study, NLRP3 inflammasome activation was found in ox-LDL-treated THP-1 macrophages. This finding was consistent with previous studies (35-37), indicating the significant role of NLRP3-induced pyroptosis in atherosclerosis. We also found that silencing OSM inhibited NLRP3 inflammasome activation. The effects of OSM silencing on attenuating ox-LDL-induced foam cell formation and inflammation were reversed by NLRP3 overexpression. These data collectively suggested that OSM activated NLRP3 to promote ox-LDL-induced initiation of atherosclerosis. In addition, the expression of NF-κB p65 was detected as NF-κB is one of the main underlying signaling pathways of mediating NLRP3 inflammasome activation (12). We found that OSM silencing could inhibit the activation of NF-κB p65, indicating that OSM activated NLRP3 through the NF-κB signaling pathway.

To conclude, this study demonstrated that OSM was highly expressed in ox-LDL-treated THP-1 macrophages. Silencing OSM was effective in inhibiting ox-LDL-induced foam cell formation and inflammation in THP-1 macrophages. The beneficial effects of OSM silencing might include the inhibition of NF-κB-mediated NLRP3 inflammasome activation. Inhibition of OSM has the potential to delay the initiation and progression of atherosclerosis and related cardiovascular diseases.

Funding: This study was supported by the Clinical Medicine + X Research Project of the Affiliated Hospital of Qingdao University (project No. QDFY+X2021035).

Reporting Checklist: The authors have completed the MDAR reporting checklist. Available at https://atm.amegroups.com/article/view/10.21037/atm-22-560/rc

Conflicts of Interest: All authors have completed the ICMJE uniform disclosure form (available at https://atm.amegroups.com/article/view/10.21037/atm-22-560/coif). The authors have no conflicts of interest to declare.