Effectiveness and safety of bevacizumab in extensive-disease small cell lung cancer: a systemic review and meta-analysis

Small cell lung cancer (SCLC) is one of the pathological subtypes of lung cancer characterized as highly invasive, poorly prognostic, and easily metastatic. It currently accounts for 12–15% of respiratory malignancies (1,2). A more significant proportion of SCLC patients are primarily diagnosed as extensive-disease (ED-SCLC) at presentation, which is defined as the presence of overt metastatic disease by imaging or physical examination.

Platinum-based etoposide regimen (EP) has been recommended as the first-line treatment for ED-SCLC for the last decades (3), which can yield up to 80% response rate and ten months of survival (4). Other studies reported that the irinotecan/platinum regimen showed a slightly superior or similar effect to the traditional regimen (5-8), which is still unsatisfactory.

Given that vascular endothelial growth factor (VEGF) has been proved to be associated with growth in tumors (9,10) including SCLC (11,12), anti-angiogenic medication is considered a potentially effective treatment in the combination of chemotherapy. Bevacizumab, a humanized monoclonal VEGF antibody, was developed and proved to improve survival in various tumors, including gastric cancer (13), colorectal cancer (14), breast cancer (15), glioblastoma multiforme (16), and non-squamous non-small cell lung cancer (NSCLC). Previous studies on SCLC revealed the ideal survival and response of bevacizumab in both naïve and relapsed SCLC patients (17-22). Besides, some two-arm studies compared the survival outcomes and adverse events (AEs) of SCLC patients who received chemotherapy (CT) with/without bevacizumab (23-25). However, no consensus has been reached on the efficacy of bevacizumab in the combination of CT for treating ED-SCLC.

We, therefore, performed a systemic review and meta-analysis to assess the efficacy and safety of CT/bevacizumab in both untreated and relapse ED-SCLC patients. Besides, the comparisons of survival outcomes and AEs between patients who received CT/bevacizumab and CT/placebo were also analyzed. We present the following article in accordance with the PRISMA reporting checklist (available at https://dx.doi.org/10.21037/atm-21-963).

The initial search for potential publications was performed in four electronic bibliography databases, including MEDLINE, Web of Science, Embase, and Cochrane Central Register of Controlled Trials from the earliest to March 2020. Unpublished studies and data from other sources were also identified for different screening. Search terms were “small cell lung cancer” and synonyms “chemotherapy” and “Bevacizumab”. The titles and abstracts of publications were initially screened. The full-text evaluation was performed after the exclusion of irrelevant studies. Both single-arm and two-arm studies were included. Review, abstract, brief report, comment, protocol design, or editorial publications were excluded. Language and species were restricted in English and human only, respectively. Publications with duplicate or unavailable data were eventually excluded from data extraction in further evaluation. Two independent individuals finished the initial search. The senior investigators reviewed the final included publications. A total of 27 publications were eligible for full-text assessment. After further evaluation, 18 candidates were excluded for various reasons, and nine studies were selected for meta-analysis (Figure 1). 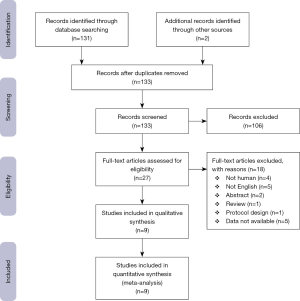 All the data were independently extracted from the articles, tables, figures, and supplements of the publications by two inspectors. The clinical characteristics, numbers of AEs, and time-to-event data, including median overall survival (OS) hazard ratio (HR), progression-free survival (PFS) HR, survival rate, objective response rate (ORR), and disease control rate (DCR) were reviewed and extracted. Some time-to-event data were collected from the Kaplan-Meier curve and its P value (26). ORR is defined as the proportion of complete response and partial response patients, while DCR is defined as the proportion of complete response, partial response, and stable disease patients. Discrepancies in search and selection would be resolved after the discussion with other group members.

A systemic review and meta-analysis were performed to evaluate the 1-year survival rate, ORR, DCR, and AE incidence. Besides, OS and PFS comparisons between CT/bevacizumab and CT/placebo were estimated by hazard ratio (HR). AE incidence was evaluated by risk ratio (RR). χ2 tests were conducted to assess the fit of distribution. I2 test was used to estimate the variation across the studies instead of the Q test, whose results were closely related to the number of included studies. The formula calculated the I2: I2=100%×(Q-df)/Q; Q stood for a heterogeneity statistic, and df was defined as the degree of freedom (df = total number of trials −1). The heterogeneity was defined as low (25–49%), moderate (50–74%), or severe (>75%). A random-effect analysis model would be used to calculate the endpoints when the heterogeneity was >50%. Z-test was performed to calculate the p-value, which was two-sided and defined as statistically different when P<0.05. Funnel plots were used to evaluate the publication bias of the included studies. The statistical analysis was conducted via R (Version 3.6.2).

A total of 133 articles were identified in the initial screening, including 131 from the electronic databases and two from other sources. Of these articles, 106 were excluded as irrelevant studies. The full-text screening was conducted on 27 publications. Nine publications were eventually selected for data extraction and meta-analysis (17-25) (Figure 1). Three studies were two-arm randomized control trials (23-25), and 6 were single-arm studies (17-22) (Table 1).

Assessment of the efficacy of bevacizumab 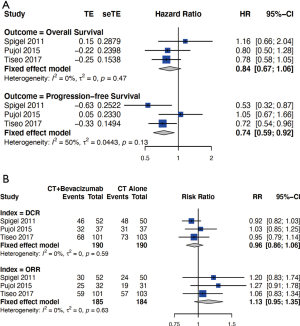 Assessment of the safety of bevacizumab

Figure 3 Forest plot of the major complications of chemotherapy (CT)/bevacizumab versus CT alone in the treatment of extensive-disease small cell lung cancer (ED-SCLC). 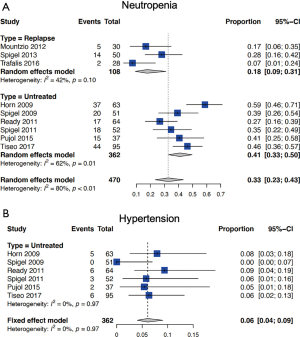 SCLC is an invasive malignancy with a poor prognosis, though it accounts for a small proportion of lung cancer. Surgical treatment with adjuvant chemotherapy or chemotherapy with cranial irradiation has been proved to be effective for limited-disease SCLC (LD-SCLC) (27). Despite the chemotherapy and radiation, ED-SCLC is considered incurable (28). Since the initial recommendation of platinum-based EP, new medications or regimens have not yielded a remarked improvement in ED-SCLC. Anti-angiogenic treatment improves prognostic outcomes in various tumors in the combination of standard regimens and becomes a new recommendation in their treatment guidelines. Based on its pronounced effect in non-squamous NSCLC (29,30), several studies have been performed to verify its role in SCLC.

Three two-arm RCTs were included in the studies comparing the efficacy of first-line CT/bevacizumab to CT alone (23,24,31). Although the prognostic advantage of CT/bevacizumab was not significantly on OS, it could improve PFS. Our study indicated that the total 1-year OS rate and 6-month PFS rates of untreated patients who received CT/bevacizumab were higher than those who received regular CT (32-34). Two studies were performed to verify the effect of irinotecan/cisplatin versus etoposide/cisplatin. They reported that both arms' median survival ranged from 9.110.2 months, while the median time to progression was 4.15.6 months (7,8). Our study showed that the median survival of patients who received bevacizumab was 9.412.1 months, and the median time to progression was 4.79.13 months, which indicated the survival outcomes of CT/bevacizumab patients were better or at least tended to be better than the patients received CT alone. Improvements in ORR could also be observed in this study, which was favorable compared to other CT alone studies (8,35).

In terms of relapse cases, O’Brien et al. reported that oral topotecan as a second-line treatment for relapse SCLC could yield 5.8 months of median survival time and 18% ORR (36). Another study compared the efficacy of oral and intravenous topotecan as second-line therapy. It showed no difference between oral and intravenous administration that single topotecan provided 18.3–21.9% ORR and 8.38.8 months of median survival time (37). In our analysis, no significant superiority was observed by adding bevacizumab to CT but a slightly higher ORR.

The most reported Grade 34 complications and bevacizumab-associated complications in these studies are neutropenia and hypertension, respectively. More hypertension cases were observed in the bevacizumab group than the control group, but no difference in neutropenia. The overall neutropenia risks were 41% and 18% in untreated and relapsed patients, consistent with regular chemotherapies without bevacizumab in other reports (7,8,35-37). Sandler et al. performed an RCT on paclitaxel/carboplatin with or without bevacizumab in NSCLC patients. They reported that 7% of patients in the experiment group had Grade 34 hypertension (38). Meanwhile, Hurwitz and his colleagues stated that 11% of colon cancer patients who received bevacizumab had Grade 3 hypertension (14). However, only 6% of patients were reported Grade 34 hypertension in the untreated group, and no case was reported in the relapse group. The results indicated that the standard regimens with bevacizumab had tolerable toxicities in ED-SCLC, which were at least not more significant than other cancers.

The bevacizumab dosages in the included studies varied from 7.5 to 15 mg/kg. It is believed that higher dosage is associated with a higher risk of complications. We, therefore, explored the Grade 34 hypertension rates among different dosage subgroups. Nevertheless, no significant difference was noticed in the severe hypertension rate between the 15 mg/kg subgroup and the 7.5 mg/kg subgroup. No other advantage was observed in the 15 mg/kg subgroup. These results indicated that higher bevacizumab dosage in ED-SCLC might not bring remark benefit.

The effects of other anti-angiogenic medications on SCLC patients are also investigated. Vandetanib, a tyrosine kinase inhibitor of multiple receptors including VEGFR, EGFR, and RET, was examined in SCLC patients in a phase II RCT. It showed that it could improve PFS of SCLC patients and significantly prolong OS in LD-SCLC. Unfortunately, ED-SCLC patients in the vandetanib group had shorter survival than the placebo group (39). Sunitinib, another multitarget tyrosine kinase inhibitor, was administered to ED-SCLC patients for maintenance therapy. Both improved OS and PFS were observed in this study, which was up to 3.7 and 9 months, respectively (40). Some researchers tried to verify the effect of thalidomide in SCLC, but no benefit from either PFS or OS was observed in the studies (41,42).

On the other hand, thalidomide was seldom used because of its potential teratogenic effect (43). Only a few studies compared CT/bevacizumab to CT alone in SCLC patients. We, therefore, performed both comparative and single-arm integrated meta-analysis to investigate the efficacy and safety of the additional administration of bevacizumab. A total of three comparative studies were eligible for analysis, which might be inconclusive because of few candidates.

The current recommended standard treatment for ED-SCLC is the combination of platinum-based chemotherapy and atezolizumab, which showed significant improvement compared to the chemotherapy alone. Meanwhile, the bevacizumab plus atezolizumab have been proved to yield better survival outcomes in other tumors (e.g., hepatocellular carcinoma, renal cell carcinoma) than monotherapy (44,45). The roles of anti-angiogenesis treatment with immunotherapy are worth verifying in ED-SCLC. A phase II single-arm study of carboplatin plus etoposide with bevacizumab and atezolizumab in ED-SCLC patients is ongoing in Europe (NCT04730999). Besides, another phase III randomized study of bevacizumab combined with carboplatin or cisplatin + etoposide + atezolizumab compared with carboplatin or cisplatin + etoposide + atezolizumab in untreated ED-SCLC patients is recruiting patients in Japan (JapicCTI-195034). These trials would provide some new ideas for using bevacizumab in the presence of immunotherapy in SCLC.

In conclusion, the effects of anti-angiogenic medication in SCLC patients are not completely clear. The present study suggests that bevacizumab in the combination of standard chemotherapy provides similar OS and slightly improved PFS than chemotherapy alone. Although the response rate is not remarkedly superior, this regimen is well tolerable. It also indicates that 7.5 mg/kg dosage of bevacizumab provides a similar effect to ED-SCLC patients with a lower risk of bevacizumab-associated complication. Further investigations on the dosage and cost-effectiveness are warranted to figure out its application. The roles of anti-angiogenesis treatment in the combination with IO is also expected to be verified.

Reporting Checklist: The authors have completed the PRISMA reporting checklist. Available at https://dx.doi.org/10.21037/atm-21-963

Conflicts of Interest: All authors have completed the ICMJE uniform disclosure form (available at https://dx.doi.org/10.21037/atm-21-963). JH serves as an editor-in-chief of Annals of Translational Medicine from Jun 2019 to May 2024. JH serves as an unpaid section editor of Annals of Translational Medicine from Jan 2021 to Dec 2021. The other authors have no conflicts of interest to declare.