Oral squamous cell carcinoma (OSCC) is the main type of oral cancer, accounting for nearly 90% of cases (1). According to reports, the incidence of OSCC is increasing yearly. By the end of 2017, it was estimated that the global number of new cases and deaths caused by OSCC were 1,688,780 and 600,920, respectively (2,3). The high incidence of OSCC is mainly attributed to two major risk factors: smoking and drinking (4). Also, OSCC is associated with long-term malnutrition, oral viral infection, and poor hygiene (5). Despite the tremendous progress made in medical treatment, the five-year survival rate for OSCC has hardly improved in the past few decades (6). Therefore, it is vitally important to identify the intrinsic mechanism of OSCC and seek new therapeutic strategies for its treatment.

In clinical applications, local anesthetics are used for local infiltration, peripheral nerve blockade, and central neuraxial anesthesia in cancer surgery. Local anesthesia is part of the patient’s preoperative analgesic regimen. It has been reported that using local anesthetics clinically could decrease recurrence of breast cancer (7-9), thyroid cancer (10), prostate cancer (11), and OSCC (12). Bupivacaine (Bupi) is a widely used long-acting local anesthetic. Strikingly, in the last decade, Bupi has been reported to inhibit the development of various tumors (13-15). Still, the anti-OSCC role of Bupi has not been discussed yet, and our work revolves around the anti-tumor effects of Bupi in oral squamous cell carcinoma.

The treatment of OSCC has been developing for decades. Targeting cell proliferation and stemness are valid cytotoxic strategies on human OSCC cells (16). Signal transducer and activator of transcription 3 (STAT3) is a member of the STAT family and participates in many physiological processes including cell proliferation and differentiation (17). In head and neck squamous cell carcinoma, phosphorylated STAT3 was associated with lymph node metastasis, recurrence, and poor prognosis (18). Extracellular signal-regulated kinase (ERK) is a subfamily of the mitogen-activated protein kinase. ERK was reported to be implicated in OSCC development and progression (19). Thus, activation of ERK1/2 and STAT3 could contribute to the development of OSCC (20). A positive correlation between ERK/STAT3 activation and OSCC was found in several studies (19,21). Our aim in this study was to evaluate the activation levels of STAT3 and ERK1/2 in OSCC cells and investigate the possible correlations of these molecules with the malignant progression of OSCC.

In the present study, relevant research was conducted to explore the role of Bupi on OSCC cells and its underlying mechanism of action.

We present the following article in accordance with the MDAR reporting checklist (available at http://dx.doi.org/10.21037/atm-21-1414).

The CAL-27 cell toxicity of the Bupi assay was performed by a cell counting kit-8 (CCK-8; Beyotime, Haimen, China), according to the manufacturer’s instructions. Bupi (molecular formula: C18H28N2O, molecular weight: 288.4, purity: 98.00%, Figure 1A) was purchased from Glpgio Technology (Shanghai, China). The CAL-27 cell cultures were treated with a Bupi concentration gradient ranging from 0 to 100 µm for 48 h. The concentration gradient was selected in accordance with previous literature (22).

The CAL-27 cells in each group were cultured in a 24-well plate and treated with 50 µmol/L EdU medium for 2 h. The EdU incorporation assay was performed by a Cell-LightTM EdU imaging kit, according to the manufacturer’s instructions (RiboBio, Guangzhou, China). After fixing with 4% paraformaldehyde, the cells were stained with the EdU reaction solution, then the cell nucleus was stained with Hoechst.

The CAL-27 cell apoptotic rate was detected by an Annexin V-FITC/propidium iodide (PI) apoptosis detection kit (Multisciences, Shanghai, China) according to the manufacturer’s instructions. Briefly, after washing twice with ice-cold PBS, CAL-27 cells were re-suspended and stained with 5 µL of Annexin V-FIFC and 10 µL of PI for 15 min under dark conditions. The samples were analyzed in a fluorescence-activated cell sorting (FACS) Calibur flow cytometer (BD, Franklin Lakes, NJ, USA).

Analysis of tumorigenicity in vivo

A total of 30 BALB/c nude mice (4-week-old) were used to established xenograft nude model. About 1×107 CAL-27 cells were injected subcutaneously, the mice were treated with bupivacaine (40 µmol/kg) or equal volume saline. After 7 days of injection, we measured tumor growth every 3 days. 30 days later, the mice were killed by cervical dislocation, and tumors were harvested to assess tumor weight or size, followed by immunohistochemical and western blotting analysis. Animal care and method procedure were authorized by the Animal Ethics Committee of The Affiliated Hospital of Stomatology of Southwest Medical University (No. 20180722001), and were carried out in accordance with the National Institutes of Health guide for the care and use of Laboratory animals (National Academy of Sciences Press, 2011).

To discover Bupi’s role on proliferation, EdU and clonal formation assays were performed. As shown in Figure 2A, the number of EdU positive cells (shown as red) was significantly decreased by Bupi treatment in a dose-dependent manner (P<0.05), compared with the control group. The cell colony formation rate was significantly reduced compared with the control group (Figure 2B). In addition, western blotting results showed that Bupi downregulated the Ki67 and PCNA maker protein expressions in a dose-dependent manner (Figure 2C, P<0.05). 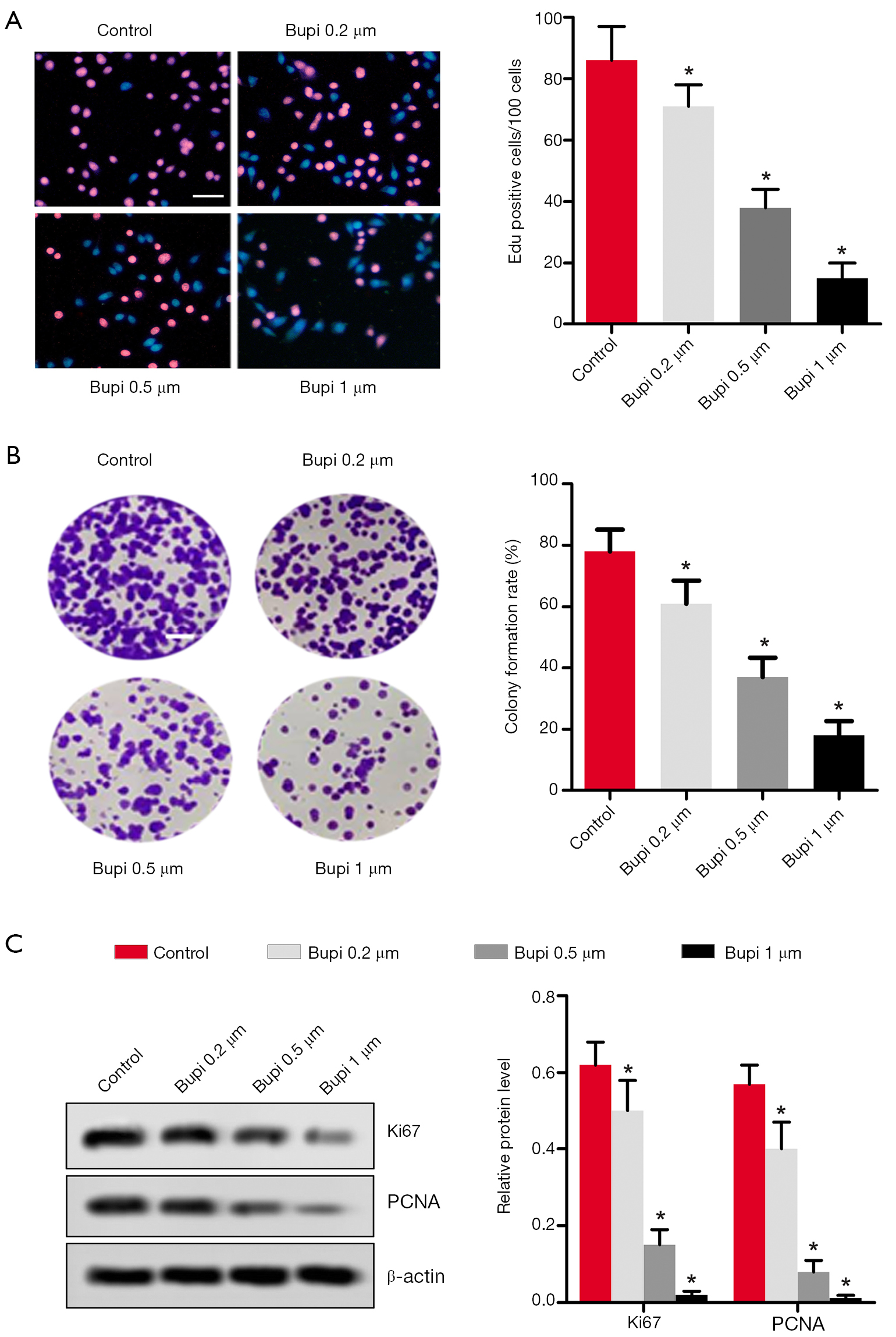 To elucidate the role of Bupi on apoptosis, flow cytometry was performed. As seen in Figure 3A,B, the cell apoptosis rate was significantly increased by Bupi treatment in a dose-dependent manner (P<0.05). Furthermore, the expression of caspase-3, caspase-9, and survivin proteins were detected. Results showed that Bupi downregulated the survivin protein expression but upregulated the caspase-3 and caspase-9 protein expressions in a dose-dependent manner (Figure 3C,D, P<0.05). 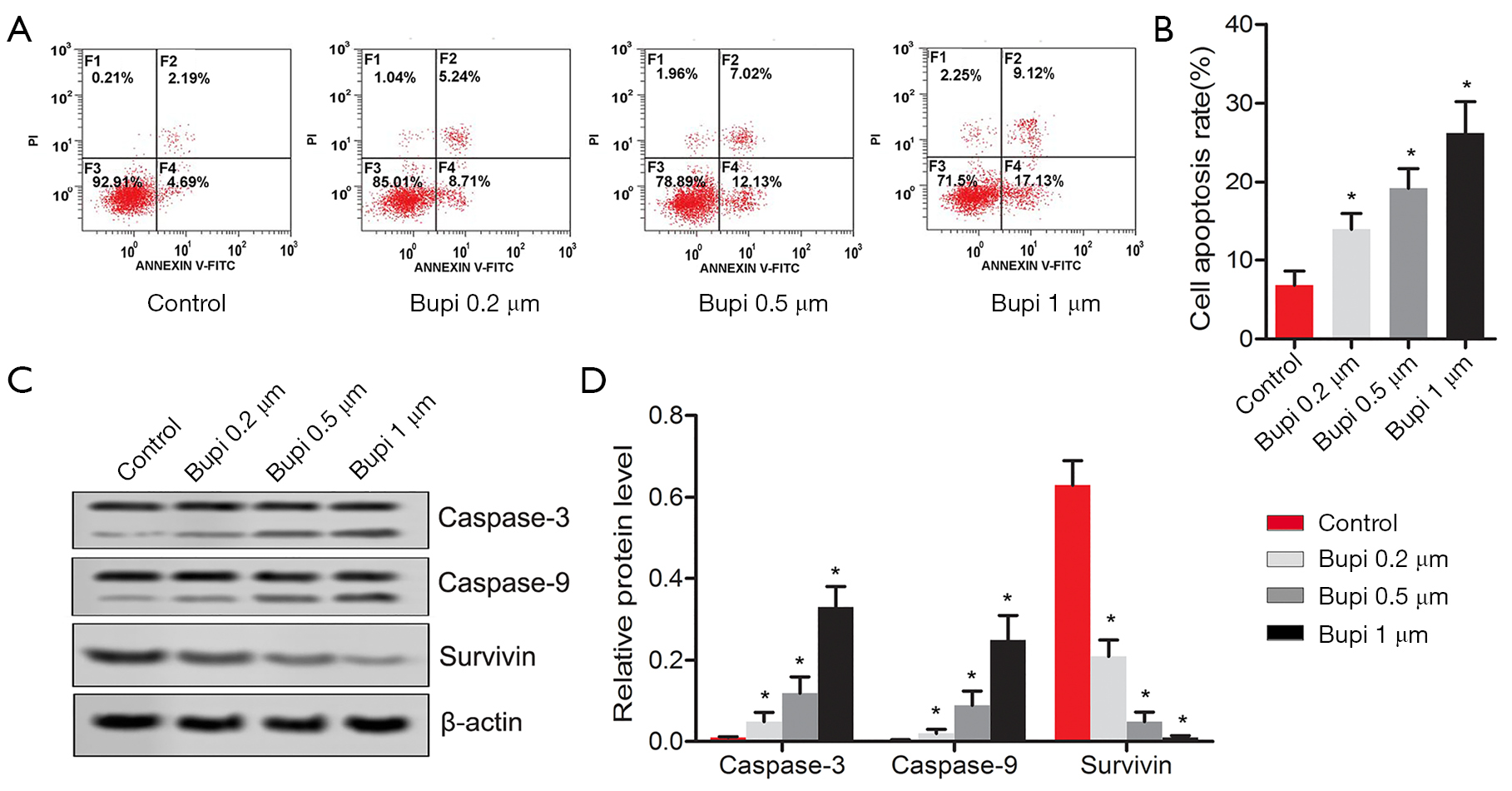 Figure 3 Bupi induces the apoptosis of CAL-27 cells. (A,B) Flow cytometry assay showing the effect of Bupi on cell apoptosis in CAL-27 cells. The cell apoptosis rate is quantified by counting the Q2 + Q4 quadrant. (C,D) The relative expression of cleaved caspase-3/9 and survivin proteins is examined by western blotting. *P<0.05 vs. control. Data are presented as mean ± SD in triplicate.

To clarify the role of Bupi on the stemness of CAL-27 cells, a cell sphere formation assay was performed as previously described. As shown in Figure 4A, Bupi suppressed the formation of spheres by reducing the diameters of the spheres (Figure 4B) and the sphere numbers (Figure 4C) in a dose-dependent manner. Also, we detected the expression of stemness marker proteins, including SOX2, NANOG, and OCT4. Results showed that SOX2, NANOG, and OCT4 protein expressions were all down-regulated by Bupi in a dose-dependent manner. (Figure 4D,E, P<0.05). These data indicated that Bupi clearly reduced the stemness of CAL-27 cells. 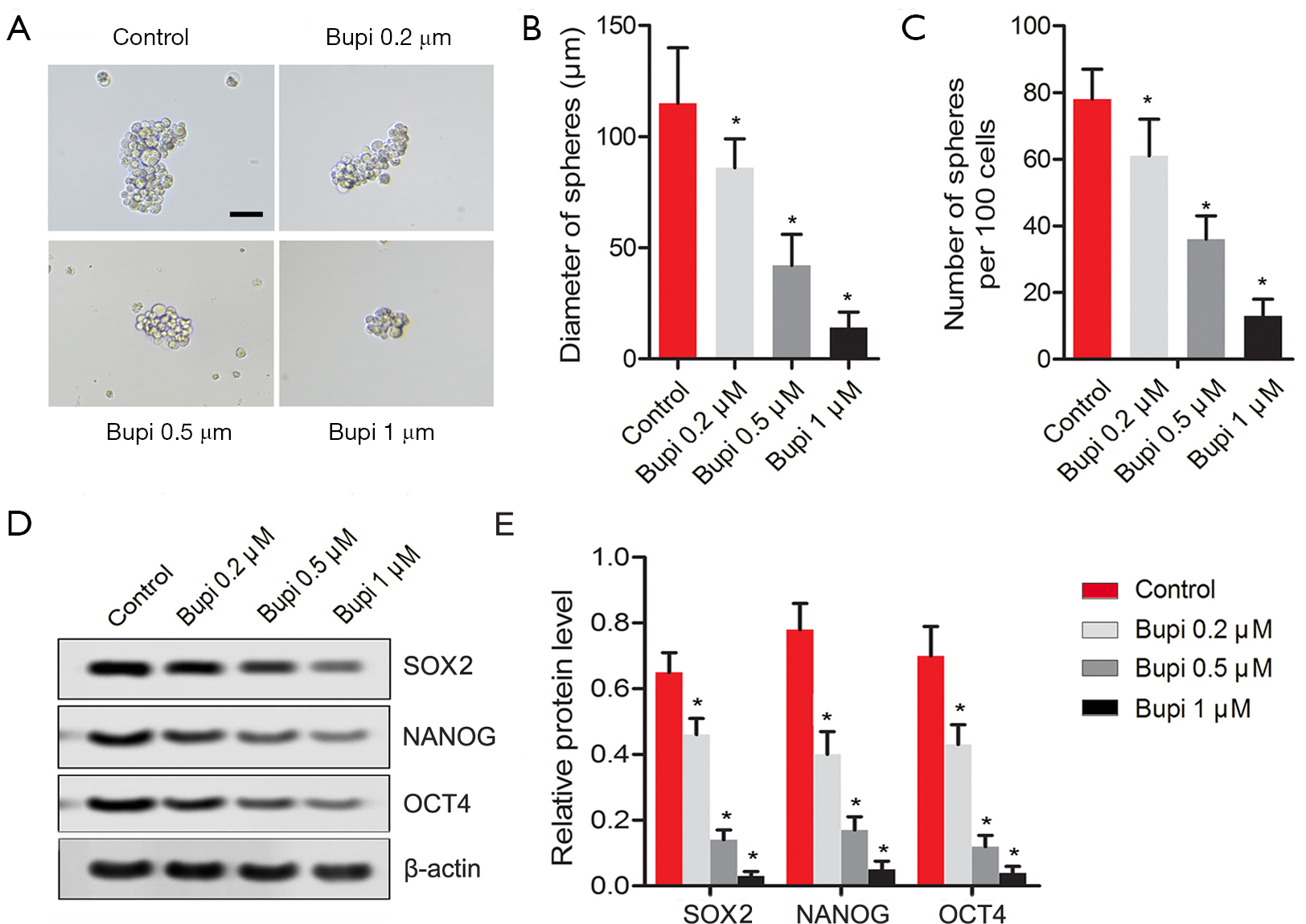 Figure 4 Bupi inhibits the cell stemness of CAL-27 cells. (A) Cell stemness of CAL-27 cells is assessed by sphere formation assay. The scale bar =50 µm. (B) The diameters of spheres in each group are measured. (C) The number of spheres in each group are counted. (D,E) The expression of stemness-related proteins is determined by western blotting. *P<0.05 vs. control. Data are presented as mean ± SD in triplicate. SOX2, sex determining region of Ychromosome related high mobility group box 2; OCT4, recombinant octamer binding transcription factor 4.

Bupi inhibited the phosphorylation levels of ERK1/2 and STAT3 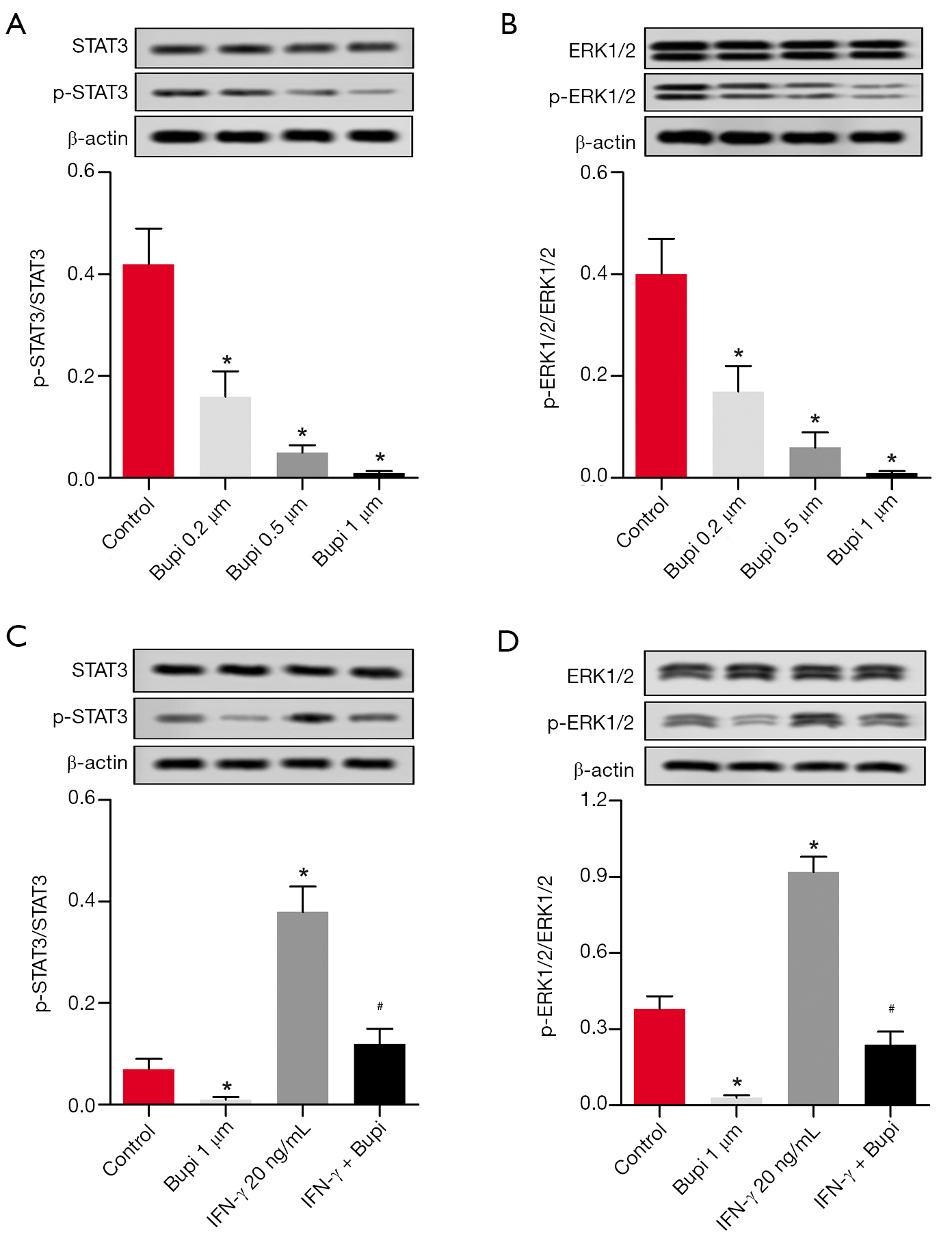 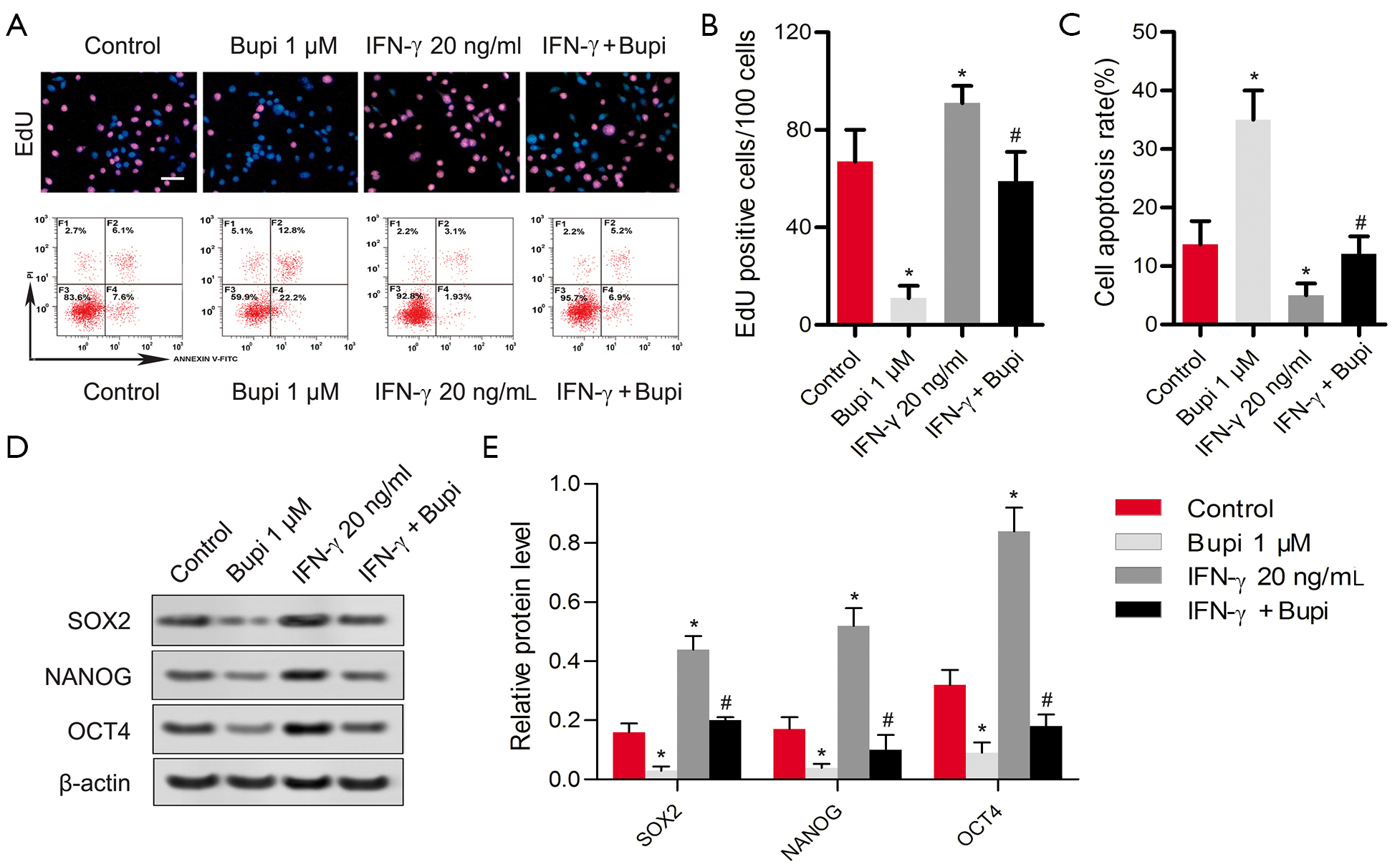 CAL-27 cells were subcutaneously injected to form xenograft tumors in vivo. The results showed that tumor weight and volume treated with 40 µmol/kg Bupi were obviously lower compared with the control group (Figure 7A,B). The apoptotic cells were increased, and the number of Ki67+ expression was decreased (Figure 7C,D,E). Neferine treatment also down-regulated the expression of SOX2, NANOG, and OCT4 proteins (Figure 7F). 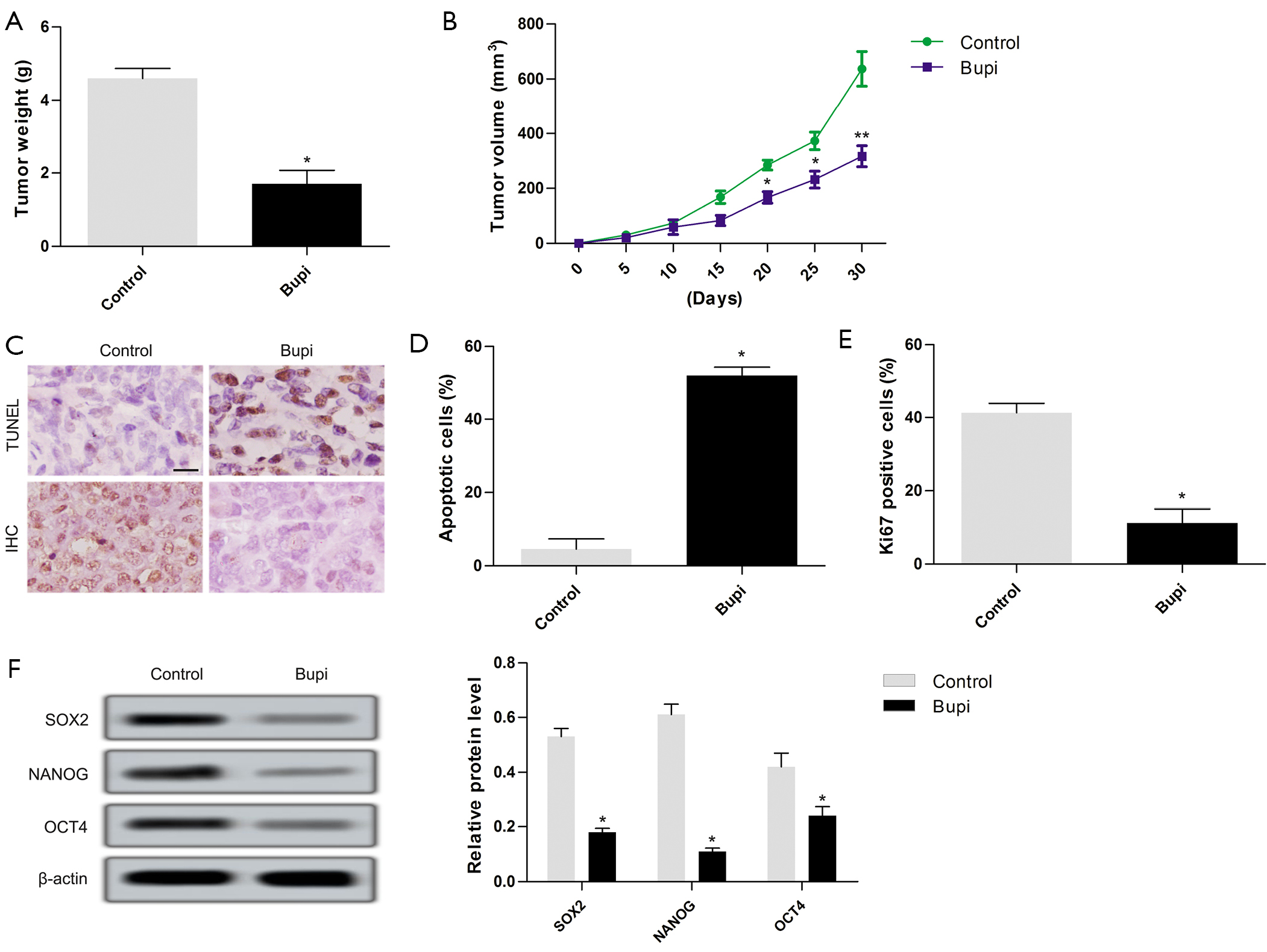 Due to the high incidence of recurrence and the lack of effective early treatment strategies, the treatment of OSCC remains a huge challenge (23). The pathology mechanism of OSCC is related to the unlimited proliferation and stemness formation of oral squamous cells (24,25). In the current work, CAL-27 cells were selected as the object of an in vitro study to explore the role of Bupi on OSCC.

Bupi has been shown to limit the growth and migration of several cancer cells. For example, Bupi was reported to inhibit cell viability and proliferation and promote apoptosis in thyroid cancer by inhibiting ERK1/2 signaling (10). Li et al. indicated that Bupi impeded the cell viability and migration of breast cancer (7). Moreover, A spectrum of studies reported that Bupi induced cell apoptosis in breast cancer cells (9), ovarian cancer cells (26), and OSCC (12). Consistent with previous studies, our primary findings indicated that Bupi can inhibit the proliferative capacity and induce apoptosis in OSCC CAL-27 cells. Notably, our study also revealed that Bupi can impede the stemness of cancer cells. It has been suggested that the tumorigenic abilities and resistance to conventional chemotherapy and radiation of OSCC cells are due to their stemness (27). Therefore, inhibiting OSCC cell stemness is a promising strategy to delay the development of OSCC. In this study, Bupi suppressed the formation of spheres, and the stemness-related proteins SOX2, NANOG, and OCT4 were significantly downregulated, which suggests that Bupi can inhibit the stemness of OSCC CAL-27 cells.

STAT signals have been found to be associated with tumorigenesis (28). STAT3 sustained activation contributes to malignant phenotype (18,29). It has also been shown that STAT3 promotes initiation and malignant progression of OSCC (30,31). Previous reports support the activation of MAPK family-specific members negatively regulates signals in STAT3 various cell types (32,33). Studies have shown that ERK can phosphorylate serine 727 (Ser727) in vivo and in vitro while inhibiting STAT3 phosphorylation of tyrosine (34). Consistent with previous reports, we explored the effect of Bupi on the activity of ERK1/2 and STAT3. In this study, Bupi treatment significantly inhibited the generation of pERK1/2 and pSTAT3, which suggested that Bupi could inhibit ERK and STAT3 signaling pathways.

IFN-γ is a cytokine secreted by CD8+ cytotoxic T lymphocytes, which are natural killer cells and macrophages. IFN-γ regulates the differentiation to inhibit the growth and survival of cancer cells (35). However, increasing evidence has shown that IFN-γ is a cytokine with both anticancer and carcinogenic functions (36,37). IFN-γ is generally regarded as an inflammatory cytokine and serves as an inducer of the activation of ERK and STAT3 signaling (38). Hence, in this paper, we used IFN-γ as an inducer of ERK1/2 and STAT3 phosphorylation. Our findings indicated that IFN-γ could enhance the proliferation and stemness, as well as decrease the apoptosis, of OSCC CAL-27 cells. Of note, Bupi counteracted the effect of IFN-γ on cell proliferation, apoptosis, and stemness, which suggested that Bupi regulated the cell proliferation, apoptosis, and stemness of OSCC CAL-27 cells by suppressing the activation of ERK and STAT3 signaling.

In summary, our findings showed that Bupi can suppress the viability, cell proliferation, and stemness of OSCC CAL-27 cells. The antitumor mechanism may involve the inhibition of ERK and STAT3 signaling pathway activation. This study provides a new insight for OSCC treatment and enriches our understanding of the pharmacological actions of Bupi.

Reporting Checklist: The authors have completed the MDAR reporting checklist. Available at http://dx.doi.org/10.21037/atm-21-1414

Conflicts of Interest: All authors have completed the ICMJE uniform disclosure form (available at http://dx.doi.org/10.21037/atm-21-1414). The authors have no conflicts of interest to declare.

Ethical Statement: The authors are accountable for all aspects of the work in ensuring that questions related to the accuracy or integrity of any part of the work are appropriately investigated and resolved. Animal care and method procedure were authorized by the Animal Ethics Committee of The Affiliated Hospital of Stomatology of Southwest Medical University (No. 20180722001), and were carried out in accordance with the National Institutes of Health guide for the care and use of Laboratory animals (National Academy of Sciences Press, 2011).