Lung adenocarcinoma (LUAD) is a kind of malignant tumor originated from the glandular epithelium of bronchial mucosa, accounting for approximately 40% of lung cancer (1-3). In recent years, around 1.8 million people worldwide die of fatal diseases caused by LUAD every year (3). At present, the main treatment methods are surgery, radiotherapy and chemotherapy (4-6). Smoking is responsible for primary cause of LUAD. However, as smoking rates have declined, proportionately more cases have occurred among never-smokers (7,8). Even worse, the incidence of LUAD has been increasing worldwide in the past few decades (9).

The mutation of certain gene is demonstrated to be implicated in the incidence and development of LUAD (10). Catenin beta 1 (CTNNB1), a protein encoding by CTNNB1 gene, has been reported to play roles in regulating genes transcription, cell adhesion and other cellular processes (11). CTNNB1 mutation has been found in various cancers (12,13). The β-catenin protein is a key effector in Wnt/β-catenin signaling pathway during the development of human cancer (14). The aggregation of β-catenin protein in the cytoplasm induced by CTNNB1 gene mutation can translocate into the nucleus and result in abnormal expression in cells, which further cause the abnormal activating of Wnt/β-catenin signaling pathway (15,16). Previous studies indicate that β-catenin-TCF/LEF interaction in cytoplasm can promote the transcription of downstream target genes and causes abnormal proliferation and differentiation of cells, thus promoting the occurrence of cancer (17,18). Actually, the site mutation of CTNNB1 always associate with the changes of CTNNB1 biological function in various humane diseases (19-21). A previous study shows that the CTNNB1 mutations trigger the high expression of Wnt signaling pathway, which further contribute to the development of LUAD (22). Importantly, CTNNB1 mutation suggests a poor prognosis the prognostic in LUAD (23). Our recent clinicopathologic characteristics investigation of LUAD with CTNNB1 mutation showed that women and non-smokers may have CTNNB1 mutation, and the LUAD patients who have CTNNB1 mutation tended to worse outcomes (24). However, the potential mechanism of the effect of CTNNB1 mutation on LUAD progression are still unclear.

We present the following article in accordance with the MDAR reporting checklist (available at http://dx.doi.org/10.21037/atm-21-1146).

The extraction of total RNA was completed by Trizol (TaKaRa, catalog No. 9109), followed by quantitation utilizing RNAiso Plus. The cDNA template was synthesized utilizing 5× primeScript RT Master MIX (TaKaRa, catalog No. RR036A) in accordance with the instructions. Then, a total of 2 µL cDNA was used for PCR investigation. The reaction conditions were as follows: 98 °C for 5 min, 30 cycles at 98 °C for 30 s, 55 °C for 30 s, 68 °C for 30 s, as well as 68 °C for 10 min. Relative expression of candidate genes were calculated by 2−∆∆Ct method (25). The primer sequences used in this assay were recorded in Table 1.

After adjusting the cell density of each group, a total of 1 mL 0.25% trypsin (Gibco, catalog No. 25200-072) digested cells (transfected for 24 hours) were seeded into the 12-well plate (4×105/cells). Following drew a line on the culture medium surface, washed using PBS and supplemented with fresh culture medium. Then cells were maintained for 24 h (37 °C with 5% CO2). Finally, cell migration rate was calculated by observing cells and photographing cells on an inverted microscope (Olympus Ckx53).

SeqPrep, Sickle and HISAT2software were implemented to sort raw sequencing data. Reads was assembled using StringTie (Version 1.3.3b). Furthermore, the RSeQC (version: 2.3.6) software was used for the transcriptome quality assessment. Principal component analysis was performed to assess the correlations among samples.

The differential expression analysis of DEGs

The reads counts were analyzed with DESseq2 software based on negative binomial distribution to reveal the genes differentially expressed between two groups. Benjamini/Hochberg method was used to perform FDR correction. The adjusted P value <0.05 and |log2 fold change (FC)| ≥1 were used as cut-off values for DEGs analysis. The results were visualized by heatmap and volcano plot.

The functional and pathway enrichment analysis

The successful establishment of CTNNB1 mutation was tested by PCR assay. After transfection, results of western blot indicated that the expression of the β-catenin increased in both NCI-H1299 and NCI-H1975 cells (Figure 1A). These results indicated that CTNNB1 with S37C mutation were successfully expressed in LUAD cells, and CTNNB1 S37C mutation seemed to activate the expression of β-catenin 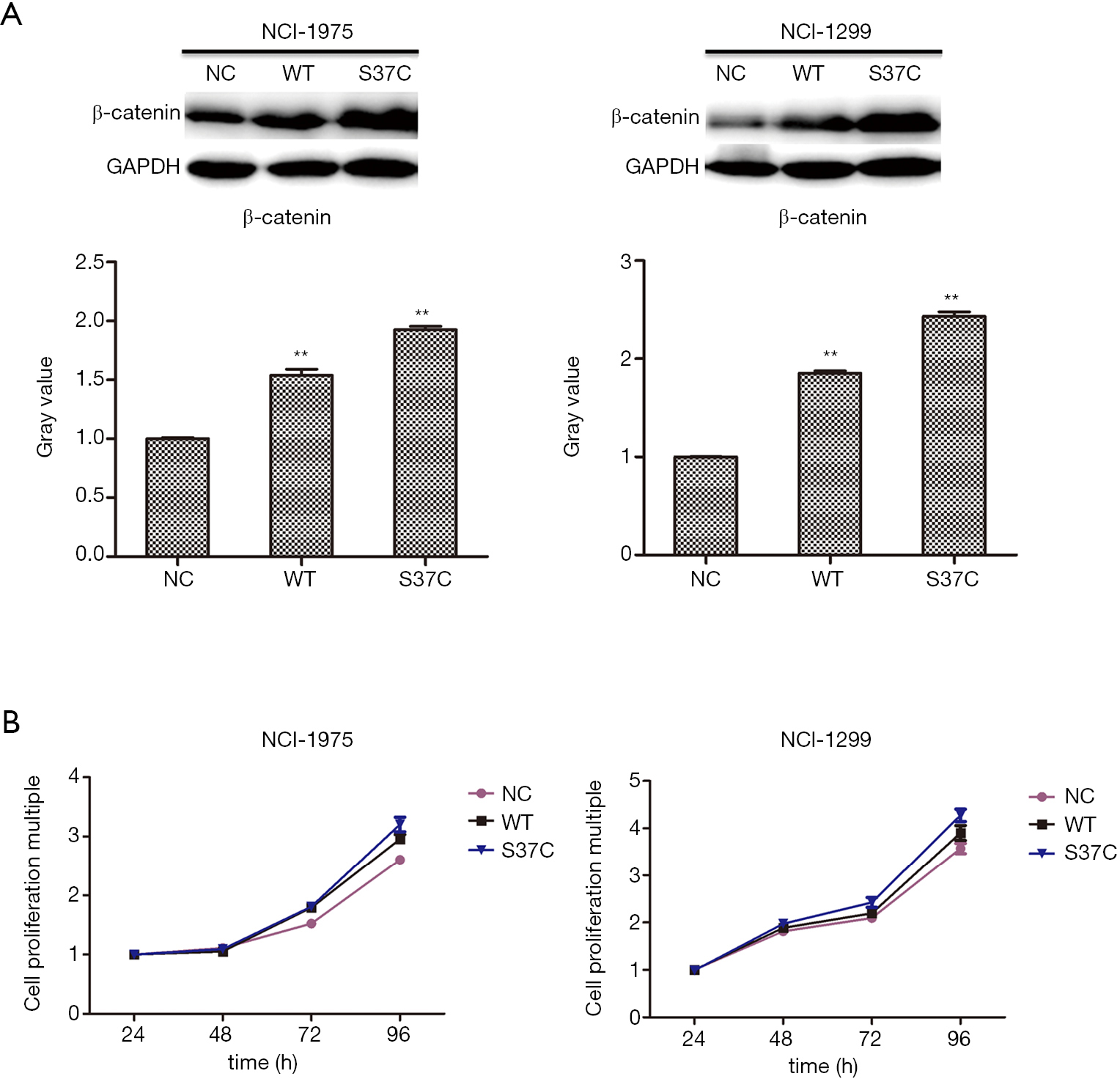 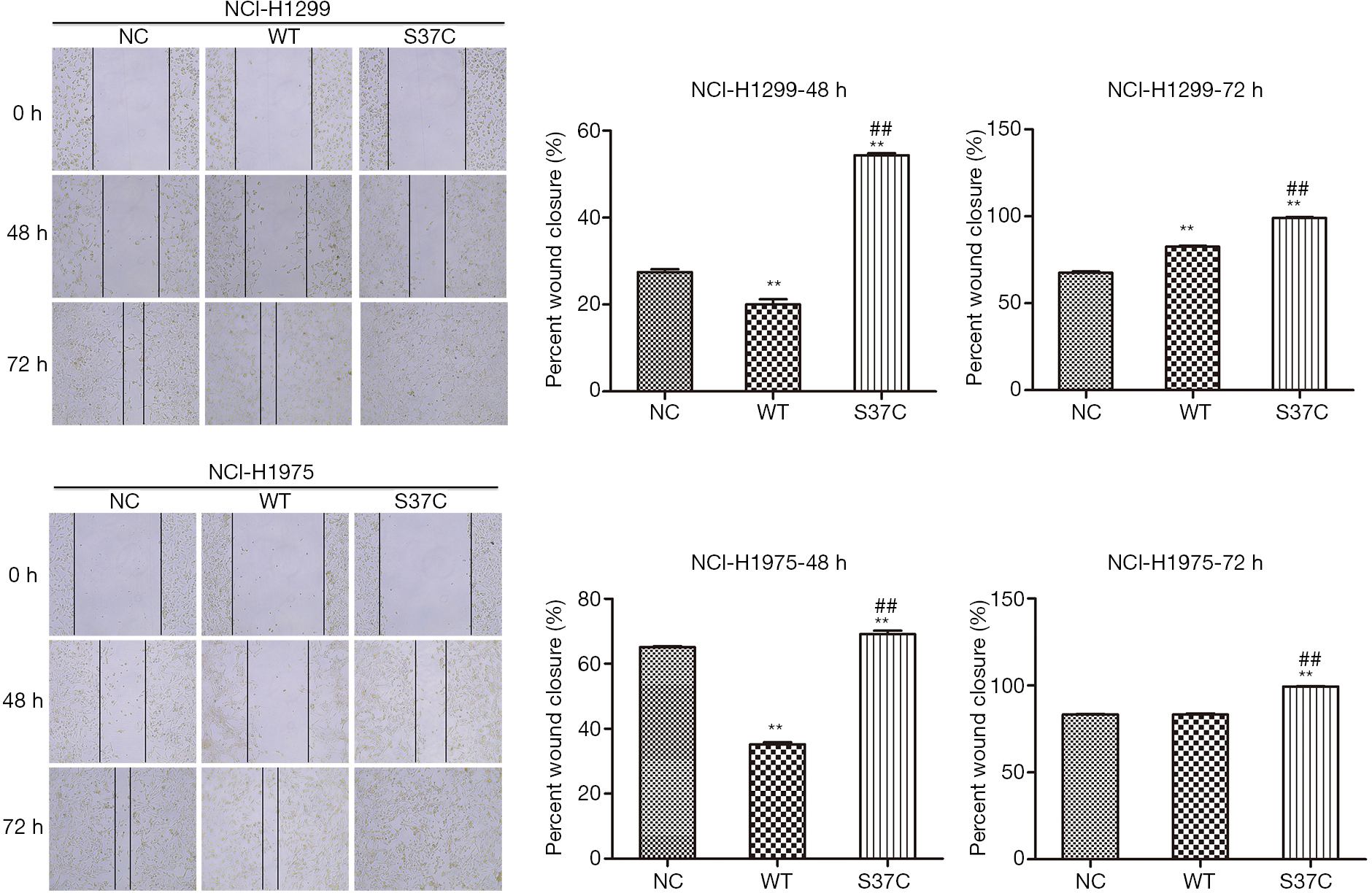 With |logFC| >2 and P<0.05, a total of 1060 DEGs including 153 up-regulated DEGs and 27 down-regulated DEGs were revealed between NC and CTNNB1 mutation groups. The heatmap and volcano plot for genes in two groups were showed in Figure 3. These results showed that samples could be well distinguished by DEGs.

Figure 3 The heatmap and volcano plot for differentially expressed genes (DEGs). Heatmap (A) and volcano plot (B) shows the results of differential expression analysis. The abscissa of the heatmap is the sample name and vertical axis is the differential gene. The squares with different color represent the different correlations between the two samples. The red node represents the up-regulated genes; the blue node represents the down-regulated genes. The Top 10 genes were annotated on the volcano map according to the absolute value of difference multiple.

The enrichment analysis of DEGs

The GO function analysis was performed for DEGs between CTNNB1 mutation and NC groups. The result showed that these DEGs were mainly assembled in functions like extracellular matrix (GO:0030198), extracellular space (GO:0005615) and cell adhesion (GO:0007155). The top 20 of GO functions assembled by DEGs were showed in Figure 4A. Moreover, these DEGs were mainly enriched in pathways including nicotine addiction (map05033), MAPK signaling pathway (MAPK signaling pathway) and gap junction (map04540) (Figure 4B). 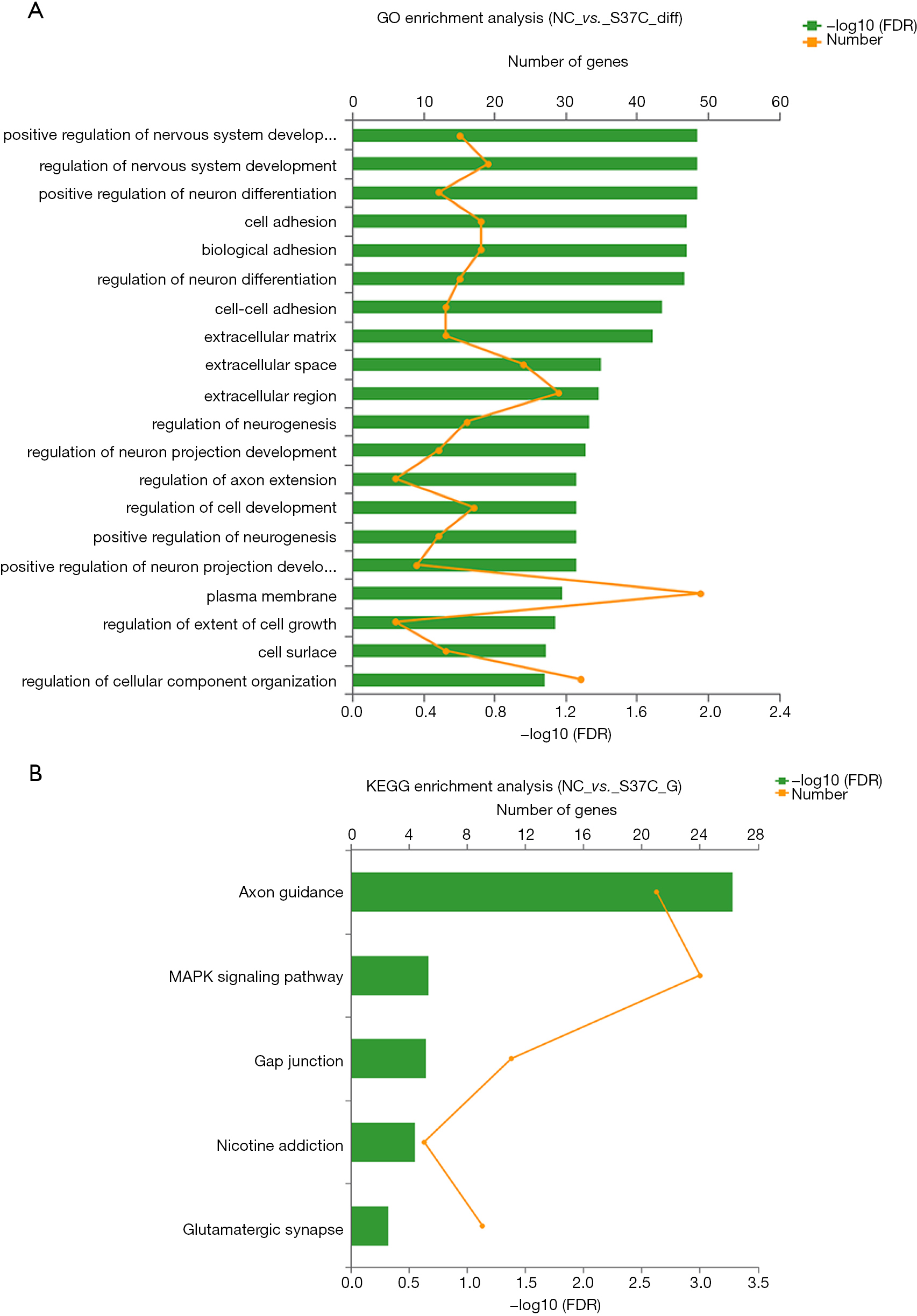 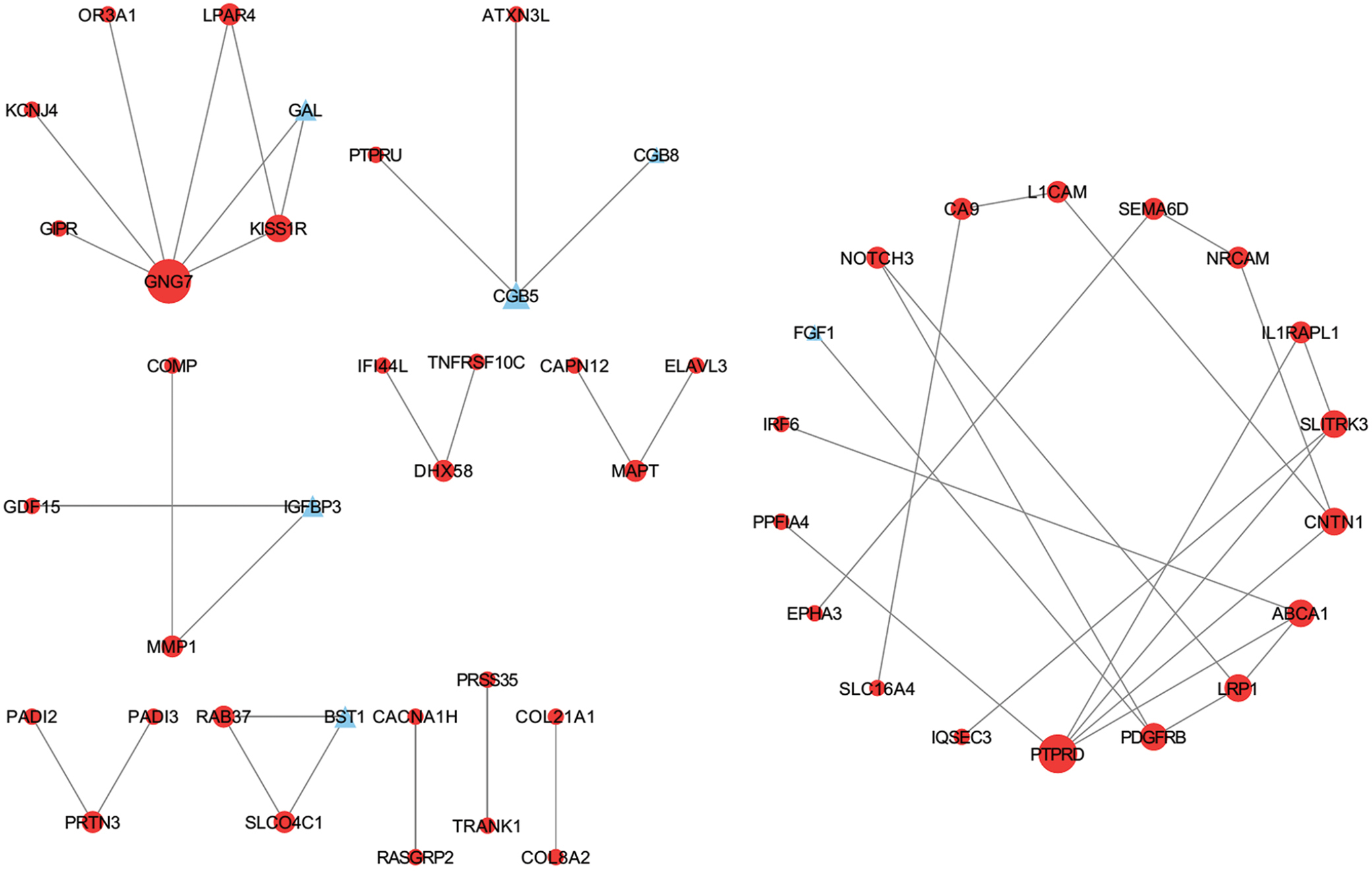 The qRT-PCR verification analysis for DEGs

We next selected and verified expression of several DEGs by using qRT-PCR (Figure 6). It could be seen that the expression of PTPRD, CNTN1, KISS1R, PTPRU and MMP1 were significantly elevated (P<0.01) in CTNNB1 S37C mutation group in comparison with that of control group. Dissimilarly, the expression of GAL, CGB5 and IGFBP3 were significantly decreased (P<0.01) in CTNNB1 S37C mutation group. These results were consistent with the results of sequencing (Figure S2). 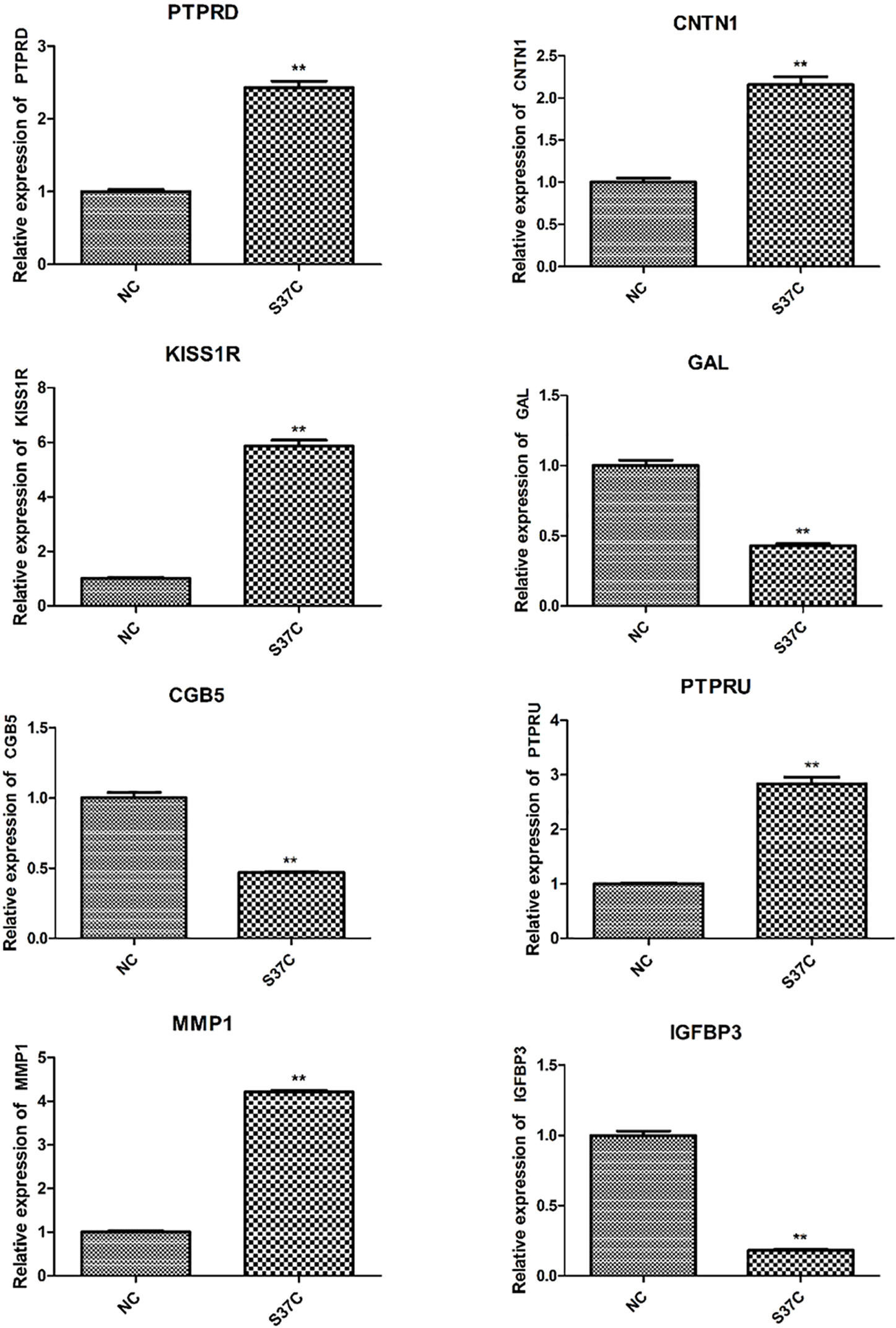 LUAD is considered as one of the main causes of cancer death worldwide. Although mutations of CTNNB1 have been found and reported in various human cancers, including LUAD (24), the effect of CTNNB1 mutation on LUAD mechanism is still unclear. CTNNB1 is a proto oncogene encoding β-catenin protein, which can cause multiple cancers after mutation (28,29). The β-catenin serves as an crucial component of Wnt/β-catenin pathway, and has been demonstrated to up-regulate in the development of a broad range of tumors (30,31). A previous study indicates that the β-catenin encoded by CTNNB1 increases proliferative and migratory abilities of cells, and triggers apoptosis in renal cancer (32). To the opposite, the knockout of CTNNB1 inhibits cell proliferation through the Wnt/β-catenin signaling pathway (33). Since the vital role of CTNNB1 mutation in the progression of cancer development, the prognostic value of CTNNB1 has been accepted in cancers such as lung cancer (23). Noriaki Sungaga et al. showed that CTNNB1 mutation mediated constitutive activation of the Wnt signaling pathway was implicated in the progression of lung cancer, preferentially in LUAD (22). In this study, the cytological effects CTNNB1 S37C mutation in LUAD cells were investigated. We found that CTNNB1 S37C mutation contributed the proliferation and migratory properties of H1299 and H1975 cells. Furthermore, we performed transcriptome sequencing to investigate the potential molecular mechanism, and a total of 1,060 DEGs were screened between NC and CTNNB1 S37C mutation groups, such as PTPRD, PTPRU, IGFBP3, MMP1 and CTNN1, etc. These DEGs were mainly enriched in functions such as extracellular matrix, as well as pathways including nicotine addiction.

Changes in gene expression is closed related with the development of LUAD (34). IGFBP-3, a protein interacted with cell-surface proteins, affects cell signaling from outside the cell or after internalization (35). It has been proved that IGFBP-3 can modulate the tumorigenesis and cell growth via IGF1 signaling in LUAD (36). Also, IGFBP-3 could interact with the extracellular matrix proteins (37). A previous study shows that the basal methylation status of IGFBP-3 could serve as a biomarker in clinical and could be used to predict the chemotherapy outcome in lung cancer (38). MMP1 is a extracellular matrix protein which vital for cell behaviors such as cell proliferation, migration (adhesion/dispersion), differentiation, angiogenesis, apoptosis, and host defense (39). The up-regulation of MMP-1 contribute to the malignant tumor progression in LUAD (40). Satio et al. showed that MMP-1 was an important therapeutic target for drug development in LUAD (41).

Actually, the biological function of genetic mutation or differentially expressed gene in tumor cell are commonly realized via certain functions and pathways (42,43). Extracellular matrix function act a crucial role in the progression of lung cancer (44). It has been proved that immunohistochemical expression of extracellular matrix proteins is correlated with lymph node metastasis in lung cancer (45). A previous study shows that the alterations in extracellular matrix function lead to the development of both metastasizing and non-metastasizing LUAD (46). In this study, PPI network showed that IGFBP-3 interacted with MMP-1. Therefore, we speculated IGFBP-3 and MMP-1 might play roles in the effect of CTNNB1 S37C mutation in LUAD by regulating extracellular matrix.

PTPRD and PTPRU are members of protein tyrosine phosphatase family that play roles in the regulation of cell proliferation and differentiation, oncogenic transformation and so on (47). PTPRU has been reported to serve as a regulator to negatively regulate the adhesion and proliferation in certain cancer cell types, mainly by its dephosphorylation of β-catenin and inhibition of following downstream signals (48). A previous study indicates that endogenous PTPRU promotes glioma progression through their effect on β-catenin and focal adhesion signaling (49). Via targeting PTPRU, certain miRNA is proved to promote metastasis in lung cancer (50). We concluded that PTPRD and PTPRU might play roles in the effect of CTNNB1 S37C mutation in LUAD. However, all the results were obtained based on data analysis. Basic experiments are needed to confirm these findings. In addition, there still remain some limitations in current study. For examples, only CTNNB1 S37C mutation was investigated. Also, we were unable to explore a large sample and lack of results of clinical samples. Thus, a further verification analysis based on a large sample size is needed.

Funding: The work was supported by grants from the Shanghai Science and Technology Commission (no. 20035800100).

Reporting Checklist: The authors have completed the MDAR reporting checklist. Available at http://dx.doi.org/10.21037/atm-21-1146

Conflicts of Interest: All authors have completed the ICMJE uniform disclosure form (available at http://dx.doi.org/10.21037/atm-21-1146). The authors have no conflicts of interest to declare.