Non-alcoholic fatty liver disease (NAFLD) is the most common cause of chronic liver disease in the world. It is expected to become the most common indication for liver transplantation by 2030 and is also considered to be a risk factor for cardiovascular disease (1,2). NAFLD can develop from benign non-alcoholic fatty liver (NAFL) to more severe non-alcoholic steatohepatitis (NASH). Nearly 25% of NASH patients could develop cirrhosis, and some of them could even progress to liver cancer (3,4). Clarifying the key links and molecular mechanisms of NAFL’s progression towards NASH will provide potential drug targets and treatment strategies for reversing NASH. It is currently believed that the abnormal activation of Kupffer cells, an intrinsic macrophage of the liver, is the core link leading to lobular inflammation (5), and the occurrence of hepatic lobular inflammation is the main pathological manifestation that differentiates NASH from NAFL (6). Therefore, exploring the molecular mechanism of abnormal activation of Kupffer cells has become the focus of current research to reverse NASH.

SFRP5 belongs to the SFRP family and contains a cysteine-rich domain homologous to the wingless/integrated (Wnt) binding site (7). A large number of studies have shown that the c-Jun N-terminal kinase (JNK) and nuclear transcription factor-κB (NF-κB) pathways are classic inflammatory pathways that can be activated by Kupffer cells during the conversion of NAFL to NASH (8). PPARγ is one of the members of the peroxisome Proliferator-Activated Receptor (PPAR) subfamily encoding nuclear receptors (9). A recent study showed that the expression level of PPARγ in liver cells under NASH was significantly lower than that in normal and NAFL states, which is consistent with the expression change of SFRP5, and the down-regulation of PPARγ expression mediated the occurrence of liver inflammation (10,11). It is suggested that PPARγ and SFRP5 may participate in the transformation of NAFL to NASH by mediating Kupffer cell activation. We present the following article in accordance with the ARRIVE reporting checklist (available at http://dx.doi.org/10.21037/atm-21-1070).

For the human normal L02 hepatocyte culture, L02 was cultured in DMEM containing 1% penicillin and 10% fetal bovine serum, and was placed in an incubator at 37 °C with 5% carbon dioxide (CO2). To co-culture the human normal L02 hepatocytes and macrophage Kupffer cells, human normal L02 hepatocytes in the logarithmic growth phase of each treatment group were first trypsinized and digested. Next, the cells were centrifuged, resuspended in DMEM medium, and counted before use. The supernatant was then discarded from the six-well plate that was covered with macrophage Kupffer cells. The cells were then washed twice with phosphate buffer saline (PBS), and 2 mL of DMEM medium was then added to the plate. The incubated transwell chamber was then placed in the six-well plate, and 1.5 mL (containing 1×106 cells) of L02 cell suspension was added to the upper chamber. DMEM medium without Kupffer cells in the lower chamber was used as the control.

Human normal L02 liver cells in the logarithmic growth phase were inoculated in 96-well plates, and the transfection process was carried out according to the instructions of the Lipofectamine 2000 kit. Specifically, after the transfection concentration was adjusted to 50 nmol/L, sh-PPARγ/pcDNA3.1-PPARγ sh-SFRP5/pcDNA3.1-SFRP5, and a negative control were transfected into the L02 cells respectively, and were designated specifically as the NC group, sh-PPARγ group, pcDNA3.1-PPARγ group, sh-SFRP5 group, and the pcDNA3.1-SFRP5 group. 24 h after transfection, the transfection effect of the L02 cells was examined under a fluorescent microscope.

The total RNA of human normal L02 liver cells was extracted according to the instructions of the Trizol kit. After measuring the total RNA concentration, 0.97 µg of total RNA was taken and reverse-transcribed according to the PrimeScriptTM RT reagent kit instructions to generate complementary DNA (cDNA). Real-time PCR was then carried out according to the SYBR® Green Real-time PCR Master Mix kit Manual. The qPCR reaction system (20 µL) included 2 µL cDNA, 0.8 µL of the forward primer, 0.8 µL of the reverse primer, 10 µL SYBR Green Mix, 0.4 µL ROX reference dye, and 6 µL H2O. The qPCR reaction (40 cycle total) conditions were as follows: 50 °C heating for 2 min, followed by 95 °C pre-denaturation for 10 min, followed by 95 °C denaturation for 15 s, and eventually 60 °C annealing for 1 min. The qPCR primer sequences used in this study were as follows: U6F: forward 5'-CTTCGGCAGCACATATACTAAAAT-3', reverse 5'-AATATGGAACGCTTCACGA-3'; PPARγ: forward 5'-TGGTGTACGATCACTGCGAC-3', reverse 5'-CACTTCTGGAAGCGGCAGTA-3'. U6 was used as an internal reference, the fluorescence signal and cycle threshold (Ct) value were detected with the icycler software of BIO-RAD (BIO-RAD, USA), and the expression level of PPARγ mRNA was calculated by the 2−ΔΔCt method.

Radio Immunoprecipitation Assay (RIPA) was used to separately lyse cells and tissues to extract total protein. The BCA method was used to measure the protein concentration before determining the sample volume per well. The samples were separated by SDS-PAGE and transferred to a polyvinylidene fluoride membrane, and then blocked with 5% skimmed milk powder for 1 h. Subsequently, the primary antibodies, PPARγ (1:1,000) and SFRP5 (1:1,000), were added and incubated overnight at 4 °C. Next, the primary antibodies were removed and the corresponding secondary antibodies, PPARγ (1:2,000) and SFRP5 (1:2,000), were added and blocked at room temperature for 1 h. The DAB reagent was then added for image development. Using glyceraldehyde-3-phosphate dehydrogenase (GAPDH) as an internal reference, the protein band was quantitatively analyzed with Image J software (U.S. State Health Center, USA).

Cells were lysed with RIPA solution, mixed, and centrifuged. The supernatant was then taken and s-methyl methanethiosulfonate (MMTS) was added. Protein from each treatment group was resuspended, reacted at 50 °C for 30 min, and shaken every 4 min. Subsequently, two volumes of ice-acetone were added, and the samples were reacted at −20 °C for 10 min, and after centrifugation, the excess MMTS was discarded. The obtained protein was then resuspended in Hens buffer, and 0.2 mmol/L maleimide biotin and 10 mmol/L ascorbate were added, which was then reacted at room temperature for 1 h. Excess biotin was removed after precipitation with acetone. The sample was then boiled in Hens buffer containing 200 mmol/L dithiothreitol (DTT) for 15 min to remove potential disulfide bonds between molecules. After that, the neutralization reaction was carried out, and the biotinylated protein was purified and eluted. Western blotting was then used to detect the SNO level of PPARγ.

The Nubiscan online software was used to predict the binding site of the SFRP5 promoter region, and a similarity score greater than 0.8 was used as the inclusion criterion. Normal human L02 hepatocytes in the logarithmic growth phase were taken and 1% formaldehyde was used for cell fixation. After standing at 37 °C for 10 min, glycine with a final concentration of 0.125 M was then added. After mixing, the cells were then placed at room temperature for 5 min to end the fixation. After fixation, the medium was discarded, the cells were washed with cold PBS three times, and the cells were then scraped into a 15 mL eppondorf (EP) tube and centrifuged at 800 ×g for 5 min to collect the cells. After centrifugation, 0.5 ml of cell lysis buffer was added to resuspend the cells. The cells were then sonicated, the sonication solution was centrifuged at 2,000 ×g for 5 min, and the supernatant was then transferred to a new EP tube to precipitate the DNA fragment. PPARγ antibody and immunoglobulin G (IgG) antibody were then added to the supernatant, 10% of the final solution was taken, and Protein A magnetic beads were added and mixed with the solution. Protein/DNA complexes were collected after 12 h of incubation at 4 °C, and DNA was purified using a gel recovery kit. QRT-PCR was then used to determine the enrichment of PPARγ protein in the promoter region of the SFRP5 gene.

The expression levels of TNFα, IL-1β, and IL-6 secreted by macrophages detected with ELISA

SNO levels of PPARγ in NAFL and NASH mouse models 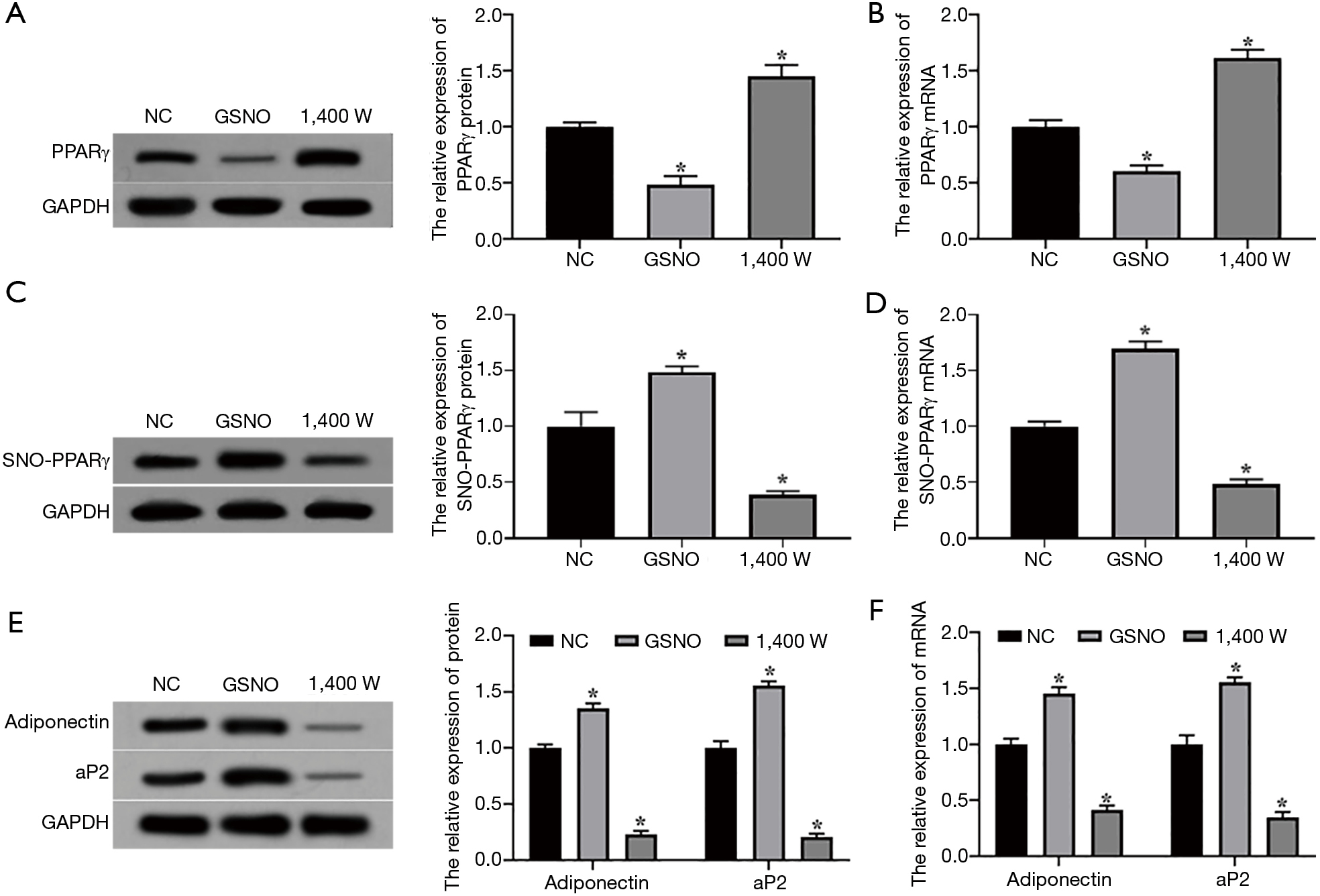 Verification of the targeting relationship between PPARγ and SFRP5 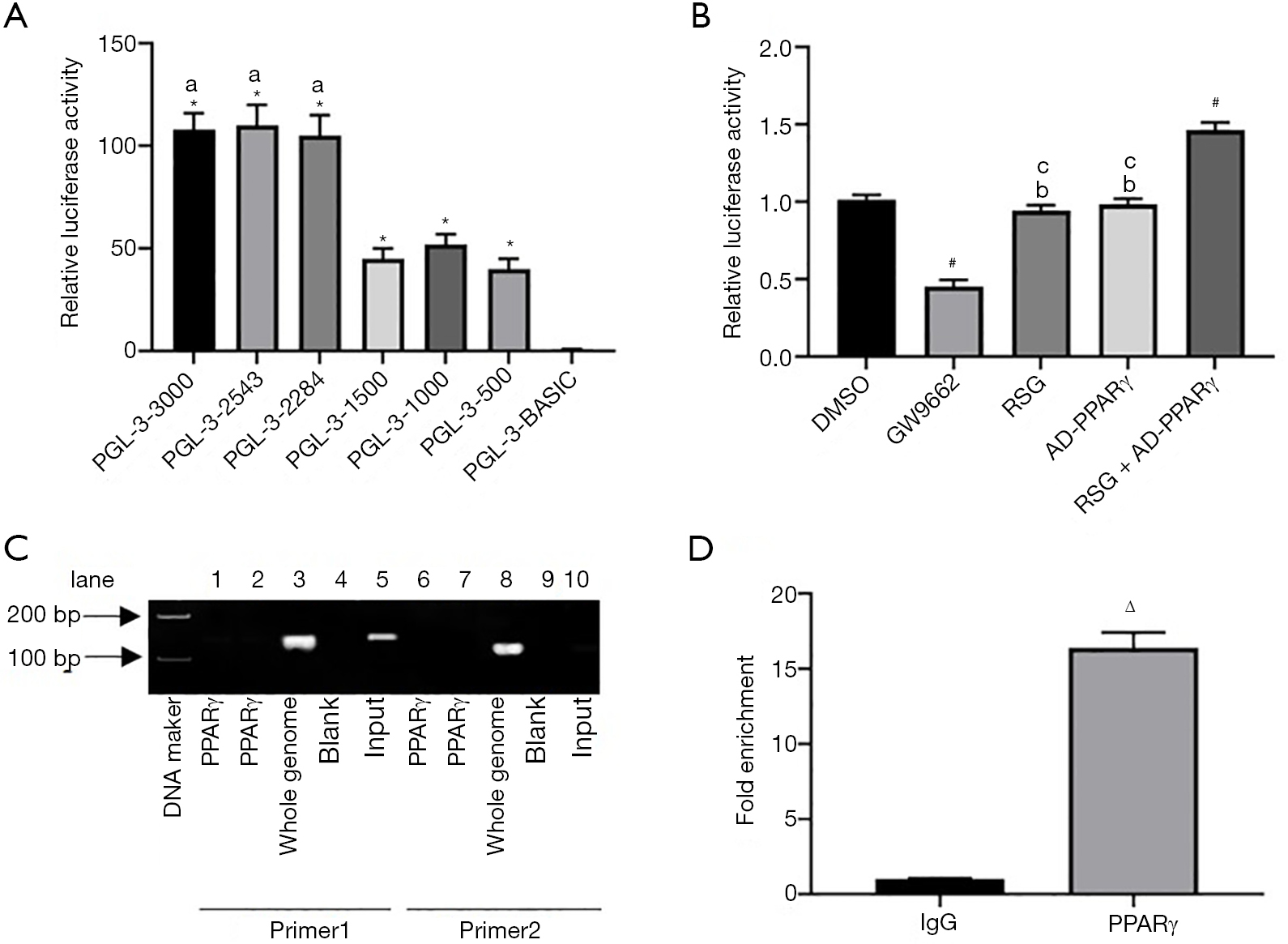 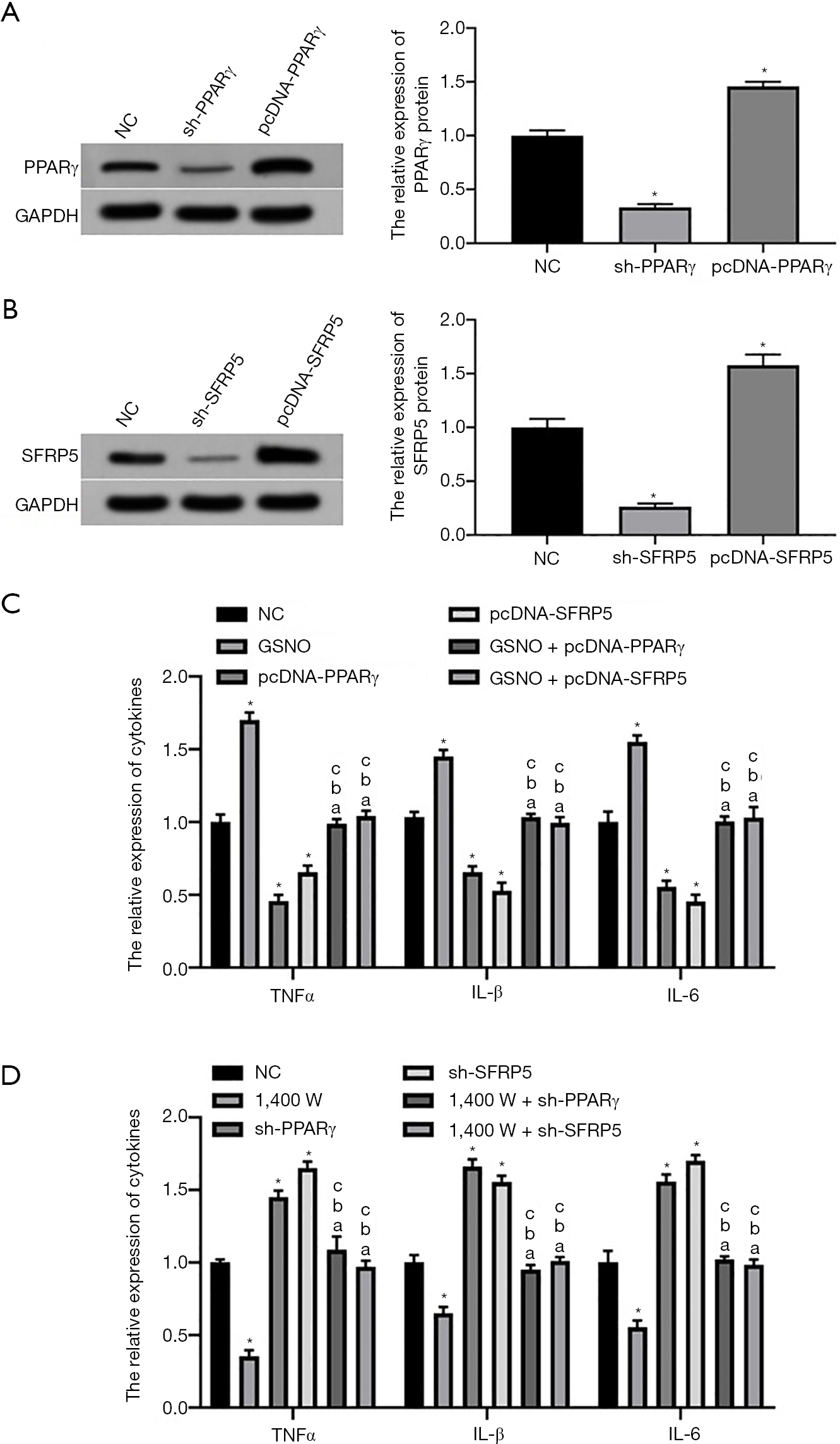 Recent studies have found that SFRP5 can inhibit the binding of Wnt5a to its receptor, resulting in the inhibition of the Wnt pathway, which inhibits the activation of macrophages in fat, gastric mucosa, and other tissues (14,15). One study also found that SFRP5 was highly expressed in hepatocytes, and the expression level of SFRP5 in the liver cells of NASH patients was abnormally lower than that of normal people and NAFL patients (16), suggesting that the abnormal activation of Kupffer cells could be due to the decreased secretion of SFRP5 by liver cells, which could have important research significance in the progress of NASH.

At the same time, clinical trials have found that rosiglitazone (PPARγ agonist) can inhibit macrophage activation and improve liver inflammation in NASH patients (17). In addition, one study also found that during adipocyte differentiation, the expression changes of SFRP5 and PPARγ were completely congruent, and rosiglitazone could increase the expression of SFRP5 (18), suggesting that PPARγ may be an upstream regulatory gene of SFRP5. In this study, the luciferase reporter gene and CHIP experiments confirmed that PPARγ can bind to the SFRP5 promoter region and can enhance the SFRP5 promoter activity. Furthermore, overexpression or knockdown of PPARγ and SFRP5 can inhibit or promote the activation of Kupffer cells, thereby regulating the transformation of NAFL to NASH.

There are several ways to regulate PPARγ expression, including transcriptional regulation, epigenetic modification, ubiquitination modification, and S-nitrosation modification (19,20). SNO is a typical redox-dependent protein post-translational modification, which is closely related to the pathophysiological process of oxidative stress responses (21). In eukaryotic cells, NOS family proteins, especially inducible NOS (iNOS), are the main endogenous nitric oxide (NO) donors, which contribute to cellular SNO (22). Cumulative studies have shown that a large accumulation of iNOS and NO will promote protein SNO, which will participate in the occurrence and development of many diseases (23-25). In addition, studies have found that iNOS is the main NO synthase in hepatocytes, which has a high expression abundance in the cytoplasm (26), and PPARγ was initially expressed in the cytoplasm (27). Also, structural analysis found that there are 10 cysteine residues in the PPARγ protein, adipocytes, and bone marrow mesenchymal cells. Some of these cysteine residues can be modified by SNO, thereby reducing the expression of PPARγ and transcriptional activity (20,21). The above-mentioned evidence suggests that PPARγ and iNOS have the same subcellular localization, and the SNO modification of PPARγ also has a spatial and structural basis. This study found that the use of ordinary diet and MCD feeding could construct NAFL and NASH mouse models, and through irreversible biotin detection, it was found that the level of SNO modification of PPARγ in NASH was significantly higher than that of NAFL. Moreover, cell experiments showed that SNO modification can down-regulate the expression levels of the PPARγ protein and mRNA in L02 liver cells. At the same time, enhancing or inhibiting SNO modification in L02 cells can in turn promote or inhibit Kupffer cell activation.

In summary, this study explored the effect of SNO modification on Kupffer cell activation via the PPARγ/SFRP5 pathway in L02 hepatocytes. The results in this study showed that SNO modification inhibited the expression levels of PPARγ and SFRP5 in L02 cells, thereby abnormally activating Kupffer cells, and thus, promoting the conversion of NAFL to NASH.

Reporting Checklist: The authors have completed the ARRIVE reporting checklist. Available at http://dx.doi.org/10.21037/atm-21-1070

Conflicts of Interest: All authors have completed the ICMJE uniform disclosure form (available at http://dx.doi.org/10.21037/atm-21-1070). The authors have no conflicts of interest to declare.

Ethical Statement: The authors are accountable for all aspects of the work in ensuring that questions related to the accuracy or integrity of any part of the work are appropriately investigated and resolved. Experiments were performed under a project license (No.: SYXK2019-0003) granted by institutional ethics committee of Shanxi Provincial People’s Hospital, in compliance with institutional guidelines for the care and use of animals.