Esophageal carcinoma has the third highest incidence and the fourth highest mortality rate of all cancers in China (1). Unfortunately, despite significant progress in the comprehensive treatment of esophageal cancer (EC) in recent years, the overall 5-year survival rates rarely exceed 40% (2,3). The primary reason for the poor prognosis is that recurrence develops in most patients, even those who receive treatment with curative intent, suggesting that in many cases, the disease may have already disseminated at the time of diagnosis. Regular and effective follow-up after optimal treatment is recognized to be a significant part of comprehensive cancer treatment, potentially taking earlier detection and better management of recurrence into account (4).

Multiple statistical methods, including cumulative incidence curves and median intervals, have been used to analyze the postoperative recurrence risks in populations of patients (4,5). Unfortunately, these methods could not offer insight into time-associated changes in the probability of events directly; however, the calculation of event-specific hazard rates during patient follow-up allows for the estimation of such changes (6). So far, only a few studies have focused on the timing of recurrence following operative treatment in patients with esophageal squamous cell carcinoma (ESCC) (7,8), and optimal postoperative surveillance strategies need to be established. Previous studies have shown that in approximately 80% of cases, tumor recurrence occurs within the first 2 years postoperatively. In our study, recurrence was found in 75.7% of patients in the first 2 years after surgery, and the vast majority (98.2%) of patients experienced recurrence 4 years after surgery. We visualized the risk of recurrence of esophageal cancer at various stages after surgery using a risk curve diagram.

This clinical study aimed to focus on recurrence patterns after surgery for ESCC using event dynamics and to confirm the postoperative follow-up strategy according to the times of recurrence.

We present the following article in accordance with the STROBE reporting checklist (available at http://dx.doi.org/10.21037/atm-21-1373).

Clinical and follow-up data of individuals with pT1–4a N0–3, M0 (pathological tumor-node-metastasis stage) (American Joint Committee on Cancer, 8th edition) thoracic ESCC who were treated with radical surgery in the Thoracic Department at Fujian Medical University Union Hospital between 2013 and 2016. The study participants each had a definitive diagnosis of a single primary tumor, and they all received radical (R0) surgical treatment to resect the tumor with 2- or 3-field lymph node (LN) dissection. Participants were aged between 18 and 75, and the pathological type was squamous cell carcinoma. The exclusion criterion was cases in which patient death occurred in the time immediately following the operation (in the 30 days after the procedure or during the initial hospital stay).

Prior to surgery, each patient was subjected to intubation using a common single lumen tube with no bronchial blocker and then maneuvered into a semi-prone position. Many of the study participants underwent radical esophageal cancer resection comprising right thoracotomy with 2-field LN dissection. and gastric tube reconstruction. In each case, 2-field LN dissection was carried out under normal conditions; based on the findings of frozen section examination of LNs along the right recurrent laryngeal nerve or presurgical images, cervical nodes were also dissected (9).

For the evaluation and comparison of the primary outcomes (OS and DFS), Kaplan–Meier curve analysis and the log-rank test were employed, respectively. Event dynamics were examined through estimation of the discrete hazard rate of a consid­ered event using the life-table method (i.e., the conditional probability that an event would occur during a time period, considering the patient had not experienced it at the beginning of the period). Since, due to random variation, the estimated hazard rates were found to be unstable to a certain degree, a kernel-like smoothing procedure was adopted, and a graphical representation of the smooth curve was created to allow the underlying pattern to be better understood (6). We performed discretization of the time axis in 2-month units, and the measurement of all-hazard rate levels was carried out as ‘events/patients at risk per 2-month interval’. Potential covariates were age, sex, pathological stage, and histological type. For the modelling of each variable’s time dependence, natural cubic splines were applied, with internal knots spaced equal distances apart within the month range (0–60 months). For all statistical procedures, P <0.05 was considered to indicate statistical significance. SPSS version 22.0 (IBM Corp., Armonk, NY) was used for all data analyses in this study.

Approval for this single-institution, retrospective study was granted by the institutional review board of Fujian Medical University Union Hospital. All procedures performed in this study involving human participants adhered to the Declaration of Helsinki (as revised in 2013). The requirement for individual consent for this analysis was waived due to its retrospective nature. 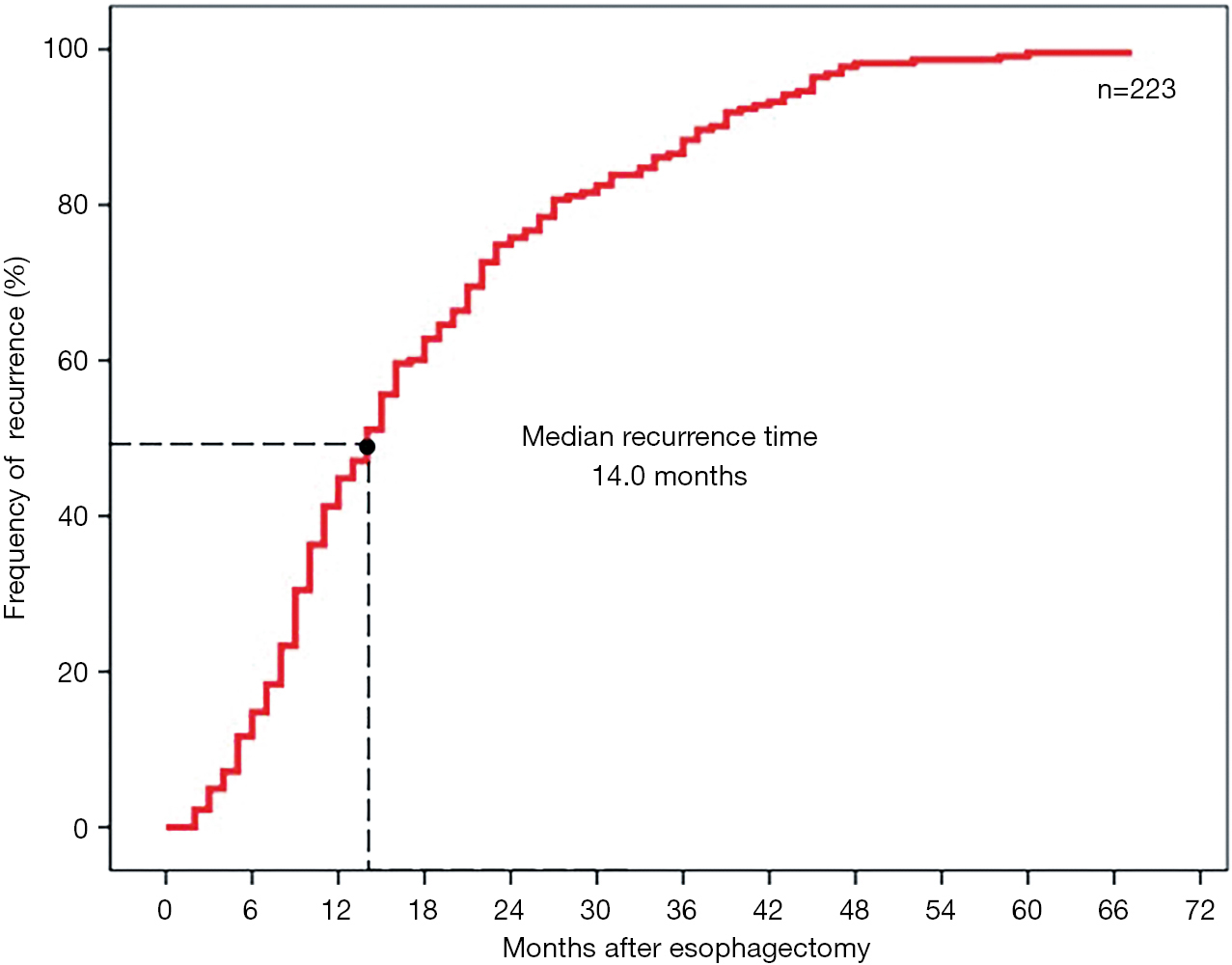 Firstly, an analysis was conducted of the hazard rate of comprehensive therapy failure in the entire cohort. Recurrence patterns based on event dynamics are shown in Figure 2. The recurrence risk rate curve showed a peak at 12 months postoperatively, followed by a gradual decline until another small peak of recurrence at 36–40 months. The risk rate of recurrence dropped to a very low level 4 years after surgery. 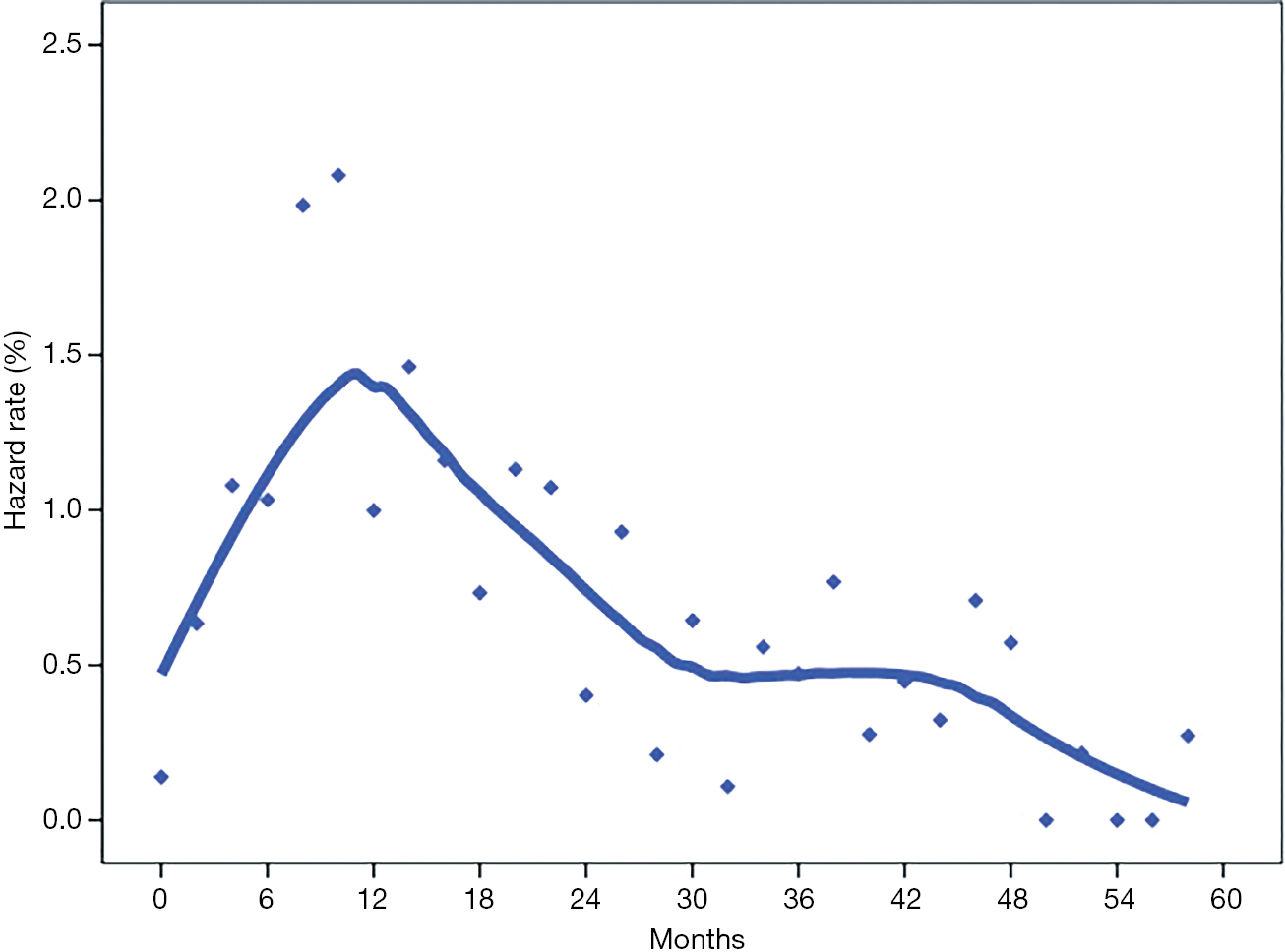 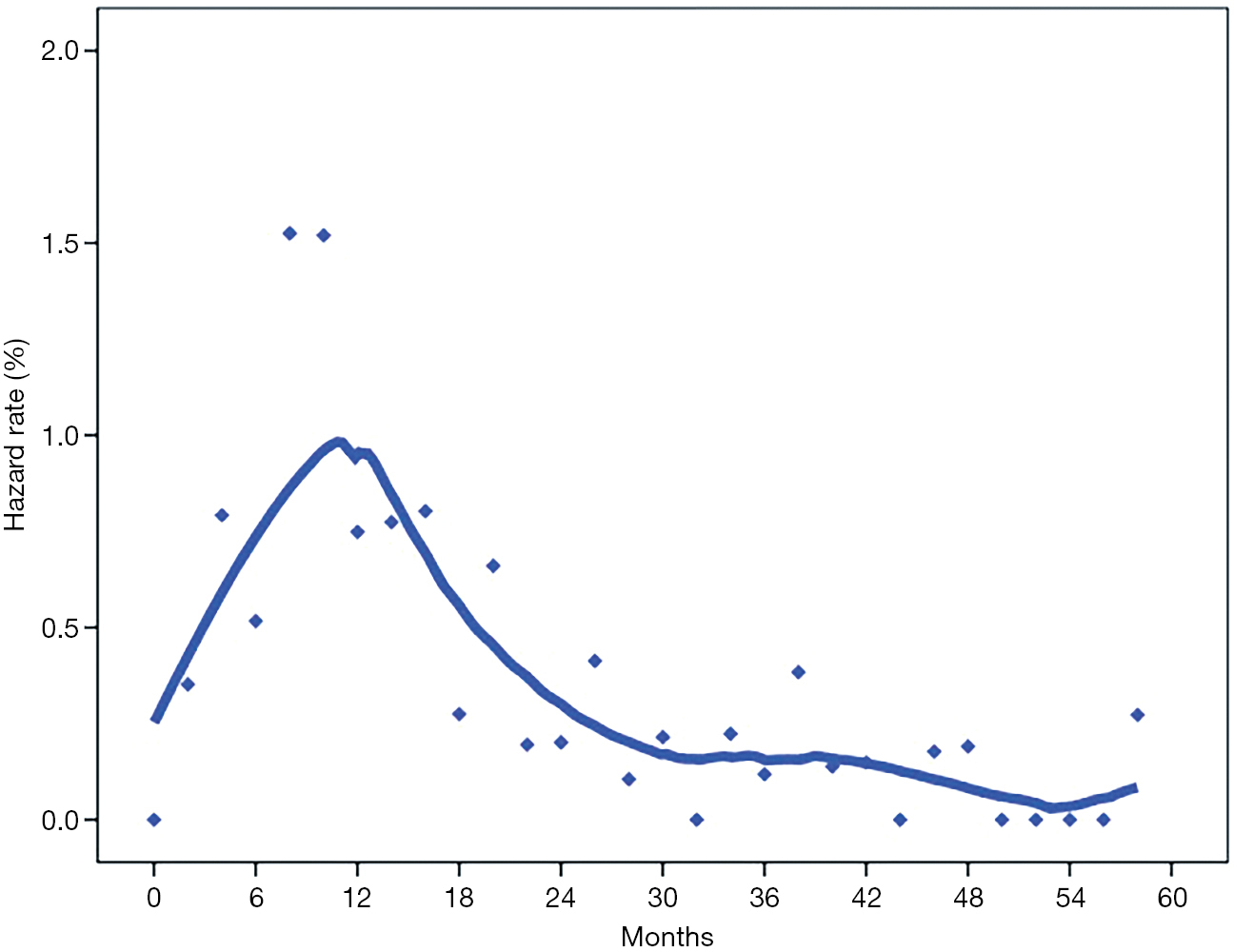 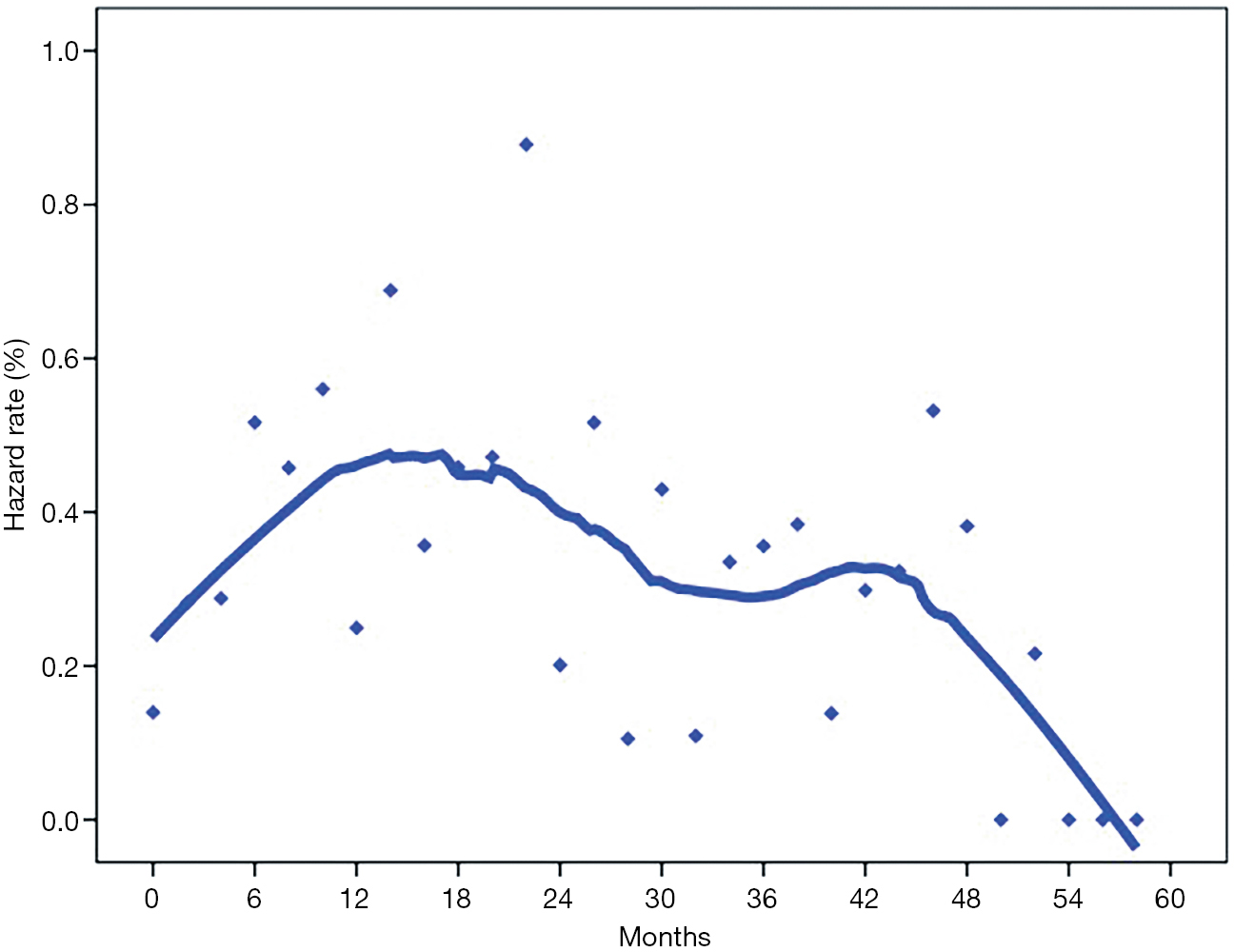 Postoperative recurrence of EC is high and significantly affects the prognosis of patients undergoing curative treatment (7,10,11). Several studies (12-15) have shown that further treatment, including surgical resection, chemotherapy, and radiation therapy, can significantly improve survival outcomes for patients with recurrent metastases after EC surgery. Yamashita et al. (13) analyzed 290 patients who underwent radical surgery for EC and concluded that although the prognosis for recurrent EC remains poor, it can be improved with effective combination therapy, including local therapy, especially in patients with LNs or lung recurrence. Hiyoshi et al. (14) also showed that multimodal therapy provides significant benefits to patients with recurrent EC after esophagectomy. When recurrent lesions are isolated or limited, aggressive surgery should be incorporated into the treatment strategy.

Among patients with recurrence, some cases can be treated even after the recurrence is detected, while others cannot due to the severity of tumor progression (14,15). To some extent, this suggests that current postoperative follow-up strategies for EC may not be sensible. In some patients, early postoperative recurrent metastases are not promptly diagnosed and treated, thus causing them to miss the optimal treatment opportunity. In short, an effective follow-up strategy is critical for transitioning the health care system to a value-based system, and individually designed follow-up strategies are required for ESCC.

Each thoracic surgery institution has its own strategy for postoperative follow-up monitoring of patients with EC. At our institution, we generally recommend that patients be examined every 3 months for the first 2 years after surgery, and then every 6 months after that for asymptomatic patients. On the basis of the National Comprehensive Cancer Network (NCCN) guidelines (16), asymptomatic patients should routinely undergo examination every 3 months for 2 years, and then every 6 to 12 months after that. However, our study suggests that this frequency of follow-up may be inadequate. In the present study, recurrence was found in 75.7% of patients in the first 2 years after surgery, and the vast majority (98.2%) of patients experienced recurrence 4 years after surgery. As surgical techniques and treatments have improved, the prognosis of EC patients has become more favorable, and it is important to recognize that this may have also changed the recurrence patterns of EC. Based on our study results, an appropriate increase in the frequency of examinations in EC patients during the first 4 years after surgery should be considered.

In approximately 80% of ESCC cases, tumor recurrence occurs within the first 2 years postoperatively (17,18), which means that a significant number (approximately 20%) of patients experience recurrence after this time. Steffen et al. showed that patients with adenocarcinoma rarely relapsed after 3 years of event-free survival, but those with squamous cell cancer remained at risk of recurrence 4 years after surgery (7). These previous studies also indicate, in part, that modification of postoperative EC follow-up strategies is needed.

As a retrospective study, the results of this study will need to be further validated by future large prospective studies. However, this study has highlighted that in EC, a disease with a high recurrence rate, current postoperative follow-up strategies may need to be adapted to detect and treat recurrence at an early stage.

Reporting Checklist: The authors have completed the STROBE reporting checklist. Available at http://dx.doi.org/10.21037/atm-21-1373

Conflicts of Interest: All authors have completed the ICMJE uniform disclosure form (available at http://dx.doi.org/10.21037/atm-21-1373). The authors have no conflicts of interest to declare.

Ethical Statement: The authors are accountable for all aspects of the work in ensuring that questions related to the accuracy or integrity of any part of the work are appropriately investigated and resolved. This single-institution, retrospective study was approved by the institutional review board of Fujian Medical University Union Hospital. All procedures performed in this study involving human participants were in accordance with the Declaration of Helsinki (as revised in 2013). Individual consent for this retrospective analysis was waived.