According to available literature, morphological appearances immediately after surgery and the further development of upper lips vary widely among patients with unilateral cleft lip with or without cleft palate (UCL/P), based on complete or incomplete nature of the cleft, even when performed by the most experienced surgeons. Few studies have quantitatively analyzed (1,2), whereas others have qualitatively described (3-6), such differences. In addition, postoperative morphological appearance of lips was better in some patients with complete UCL/P compared with those with incomplete UCL/P, even when the most experienced surgeons operated using a single technique (7). In terms of surgical technique, Nakajima suggested that methods designed for repair of complete unilateral cleft lips should not be used to repair incomplete unilateral cleft lips (8), while Chowdri suggested that either technique can be used for repair of unilateral cleft lips (9).

A major reason for the lack of postoperative morphological symmetry in cases of unilateral cleft lip is the characteristic differences in lips among patients before surgery. Conventionally, cleft lips are classified as complete and incomplete, which is too general to accurately reflect the wide variations observed in cleft lip cases. Therefore, in order to resolve this issue, we evaluated areas of the upper lip in individual patients based on geometric principles.

We present the following article in accordance with the STROBE reporting checklist (available at http://dx.doi.org/10.21037/atm-21-1424).

The study was conducted in accordance with the Declaration of Helsinki (as revised in 2013). The study was approved by ethics board of Nanjing Stomatological Hospital (No. YW-2000NL-002) and informed consent was taken from all individual participants.

Linear data of the upper lip were directly obtained from the face when a baby received general anesthesia immediately before surgery. Major landmarks were defined according to Farkas’ description (10).

For the purpose of the present study, we divided the upper lip into the cleft and the non-cleft side according to line b, which connects the midpoint of the Cupid’s bow and the midpoint of the base of the columella. Certain linear parameters were measured and certain areas were calculated (Tables 1 and 2, respectively). Figure 1 shows these parameters. 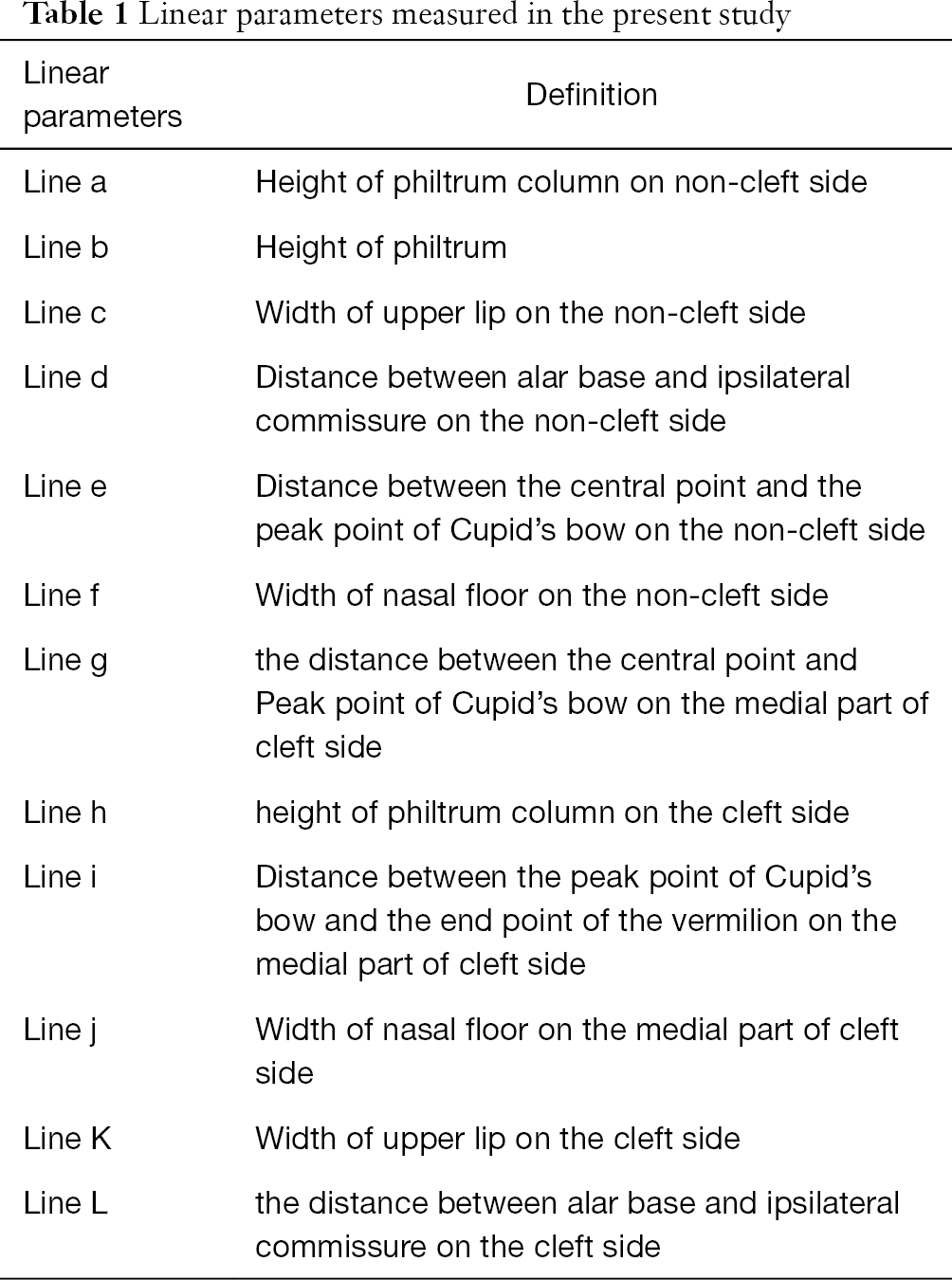 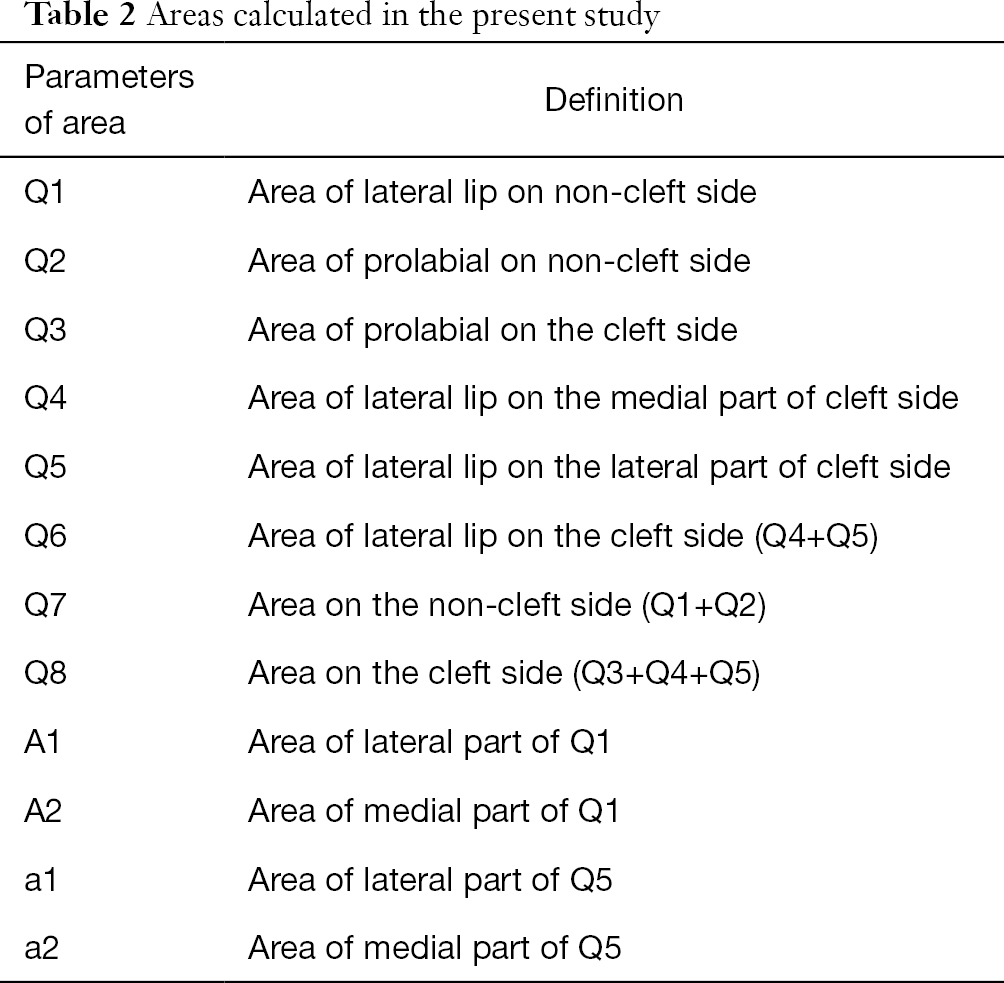 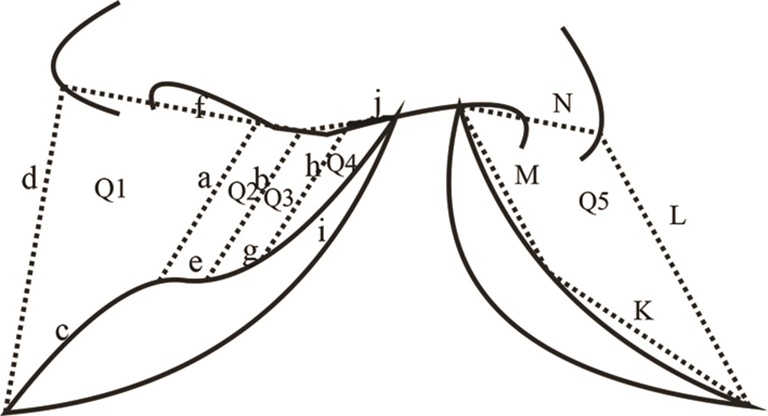 Figure 1 Schematic representation of linear and area parameters used in the present study. 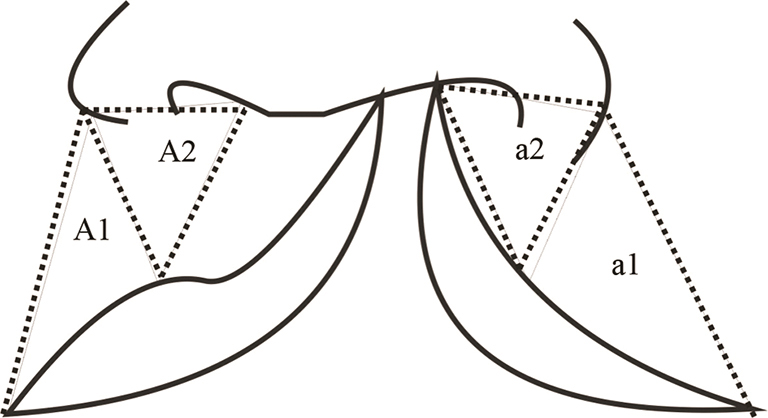 Areas of Q1–Q8 are summarized in Table 3. In general, the mean area of the non-cleft side was significantly larger than that of the cleft side in both age groups and in both types of cleft lip (P<0.05). Individual analysis revealed that the range of Q8/Q7 varied widely (45–112%). In fact, Q8 was larger than Q7 in certain cases. Moreover, values of Q8/Q7 partially overlapped between patients with complete and incomplete cleft lip (Table 4). 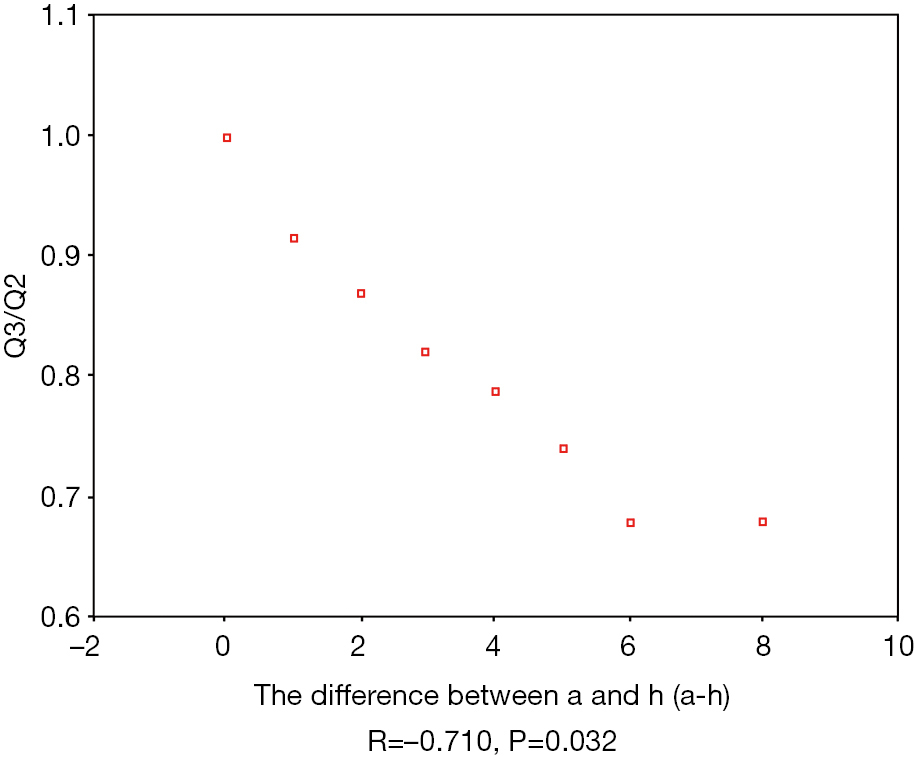 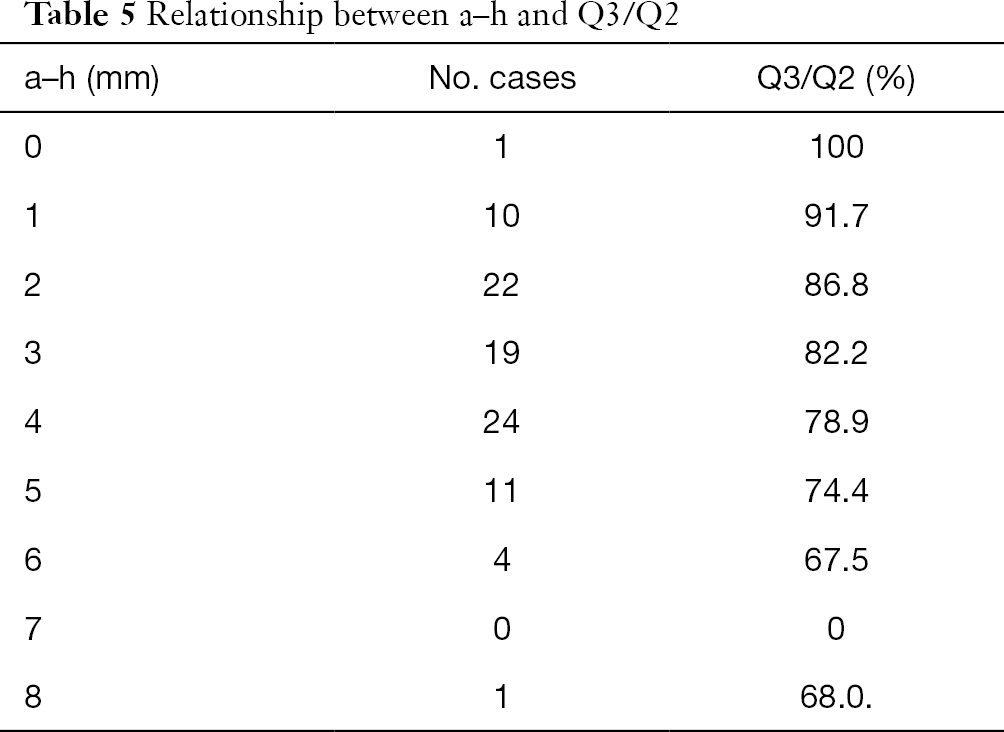 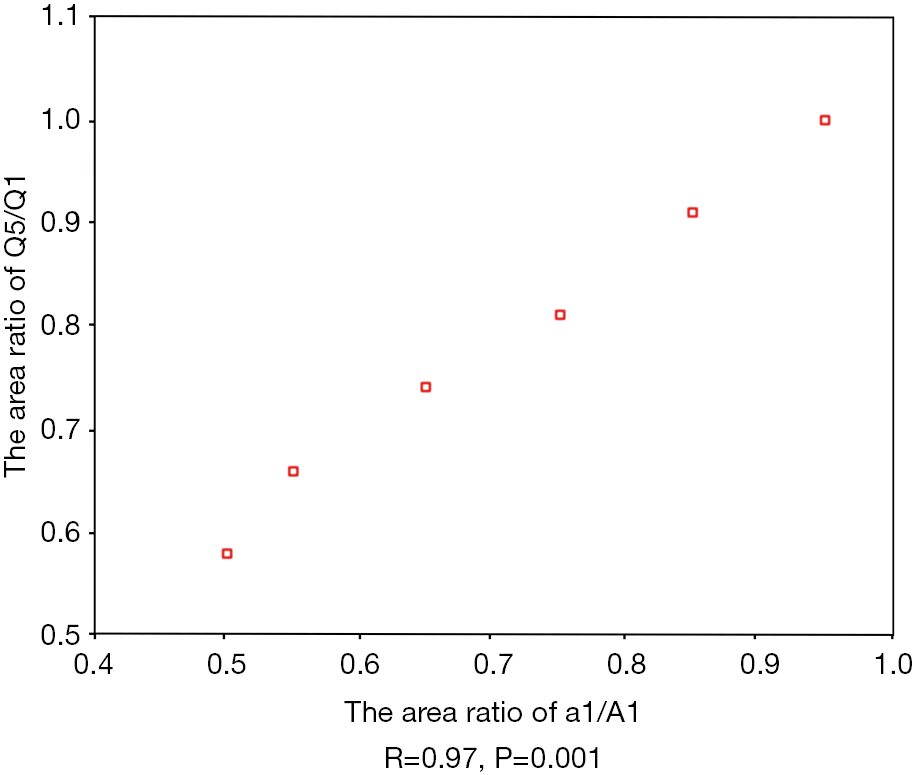 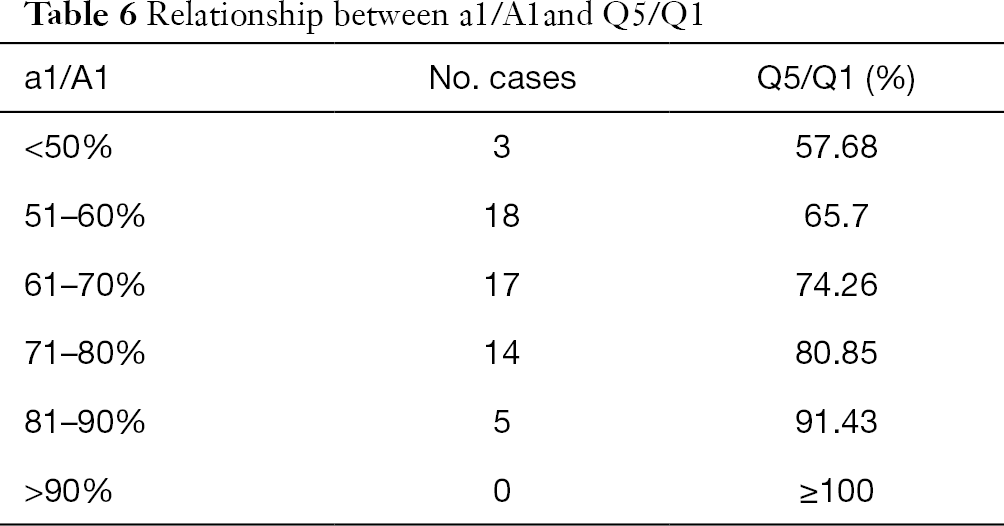 UCL/P is the most common deformity in newborn infants with cleft lip or palate (11). Some attempts have been made to describe the complicated deformity of UCL. Although several studies have described classifications of UCL based on length of the cleft (12-14), previously published studies describing other preoperative features of cleft lip are limited (15,16). Individual analysis is important to evaluate the degree of malformation, to select the appropriate repair technique, and to predict postoperative morphological outcomes.

Anthropometry is a useful tool to assess soft tissue anatomy of the upper lip, and also provides clinicians with quantitative information regarding malformed structures and regions (17,18). Various methods are used to assess cleft lip deformities, such as anthropometry (19), casts (20), photographs (21,22), video imaging (23,24), 3D computed tomography (25,26), and 3D laser scanning (27,28). In the present study, we performed measurements on live subjects because it is a simple, non-invasive technique with minimal equipment cost. Moreover, the scope for error during measurement is limited when a baby is under general anesthesia.

Available literature suggests that measurements, such as distance, angle, ratio, area, and volume are related to the evaluation of UCL (29,30). We selected area as the measurement tool, because it is the most appropriate parameter to reflect tissue defects and tissue malposition (31,32). We calculated area according to geometric principles.

Even when operated by surgeons with limited experience, the postoperative morphological appearance of some patients with complete UCL/P were better than that of some patients with incomplete UCL/P. Regardless of the type of conventional classification of cleft lip used, postoperative appearances of different lips varied widely following the same surgical technique. Therefore, conventional classification was insufficient to accurately reflect various characteristics of cleft lip, and therefore, complete evaluation of UCL is warranted.

Based on the results, parameters that reflect area ratios between the cleft and the non-cleft sides were meaningful. With the help of these parameters, we can approximately estimate the level of tissue defect, as well as postoperative appearance. Moreover, we can analyze which part of the upper lip (prolabial or lateral lip) is the primary causative factor for deformity and select the appropriate treatment approach.

Funding: This work was funded by the Medical Science and Technology Development Foundation, Nanjing Department of Health (YKK15117, QRX11125).

Reporting Checklist: The authors have completed the STROBE reporting checklist. Available at http://dx.doi.org/10.21037/atm-21-1424

Conflicts of Interest: All authors have completed the ICMJE uniform disclosure form (available at http://dx.doi.org/10.21037/atm-21-1424). The authors have no conflicts of interest to declare.

Ethical Statement: The authors are accountable for all aspects of the work in ensuring that questions related to the accuracy or integrity of any part of the work are appropriately investigated and resolved. The study was conducted in accordance with the Declaration of Helsinki (as revised in 2013). The study was approved by ethics board of Nanjing Stomatological Hospital (No. YW-2000NL-002) and informed consent was taken from all individual participants.