Diabetes mellitus (DM), of which hyperglycemia is a distinguishing characteristic, has become a public health concern of global proportions (1). Diabetes-associated cardiovascular complications are major contributors to mortality and morbidity in the diabetic population (2). Meanwhile, endothelial dysfunction, which is generally presented with a decrease in endothelium-mediated vascular relaxation, is encountered early during the development of vasculopathy (3). Endothelial dysfunction is an early and independent predictor of poor prognosis in most forms of cardiovascular disease. Clinical and experimental studies have shown that endothelial dysfunction has critical pathogenic involvement in vascular damage in diabetes (4-7).

Hyperglycemia, diminished production of endothelium-derived relaxing factors nitric oxide (NO) and increased generation of reactive oxygen species (ROS) are the principal causes of endothelium dysfunction in DM (8,9). Protocatechualdehyde (PCA), also known as 3,4-dihydroxybenzaldehyde, is a water-soluble phenolic acid compound that naturally occurs in the herb Salvia miltiorrhiza. In streptozotocin induced diabetic rats, oral administration of PCA for 8 weeks obviously ameliorated the development of diabetic cataract (10). PCA could protect against cerebral ischemia-reperfusion-induced oxidative injury, and the neuroprotective effect involves the protein kinase Cε/transcription nuclear factor erythroid 2-related factor 2/heme oxygenase-1 pathway (11). In fact, PCA possesses a variety of pharmacological properties, such as anti-proliferative, anti-inflammatory, and anti-oxidant activities (10-12), which suggests PCA is a likely pharmacotherapeutic agent in the treatment of diabetes complications. Thus far, data on the in vivo effects of PCA on endothelial dysfunction in DM are lacking. In light of these previous findings and the knowledge gap in the field, we aimed to conduct the present study so as to clarify the effects of PCA on aortic endothelial function in rats with DM and to find out some related mechanisms. We present the following article in accordance with the ARRIVE reporting checklist (available at http://dx.doi.org/10.21037/atm-21-1431).

After 1 week of acclimatization, SD rats were intraperitoneally injected with streptozotocin (STZ) (single dose of 60 mg/kg body weight, freshly dissolved in 5 mM citrate buffer). One week after STZ administration, SD rats with fasting plasma glucose (FPG) ≥250 mg/dL were deemed to be diabetic and were used for subsequent experiments (7). Control and hyperglycemic rats were randomly assigned to 4 groups (n=12 each group), namely the untreated control group (Con), the PCA-treated Con group (Con + PCA), the untreated STZ-induced diabetic group (STZ), and the PCA-treated STZ group (STZ + PCA). Rats in the two treatment groups were given PCA (25 mg/kg/day; Xi’an KinGreen, China) via gavage feeding for 6 weeks. The dosage of PCA was selected based on the dosage used in a previous study (10), and 25 mg/kg PCA has the sufficient in vivo antioxidant capacity in our preliminary experiment.

After treatment with PCA for 6 weeks, all rats were fasted overnight and anaesthetized. Blood samples were drawn via intracardiac puncture, centrifuged to obtain plasma, and used to assess fasting plasma glucose (FPG). Thoracic aortas from the rats were immediately cut into rings 3 mm in width for the subsequent vascular function experiments. The remaining aortas were stored at −80 °C for future processing. Furthermore, rat carotid artery sections were promptly subjected to freezing in OCT embedding medium (Sakura Finetek, USA) for cryotomy and subsequent detection of superoxide anion.

The protocols of the present study were described previously (13,14). In brief, aortic rings were suspended between 2 steel hooks in jacketed organ chambers with 10 mL Krebs solution (mM, NaCl 118.5, KCl 4.7, CaCl2 1.5, MgSO4 1.2, KH2PO4 1.2, NaHCO3 25.0, and glucose 11.0) aerated with carbogen and kept at 37 °C for 1 hour. Force transducers were used to detect isometric tension changes, which were recorded using a polygraph (Nanjing MedEase Science and Technology Co., China). After pre-contraction with 10−6 M phenylephrine (α1-adrenergic receptor agonist), cumulative relaxation-response curves to 10−8–10−4 M acetylcholine and 10−10–10−6 M sodium nitroprusside were recorded, respectively. Relaxant responses induced by acetylcholine and sodium nitroprusside were calculated as a percentage of the response to phenylephrine.

Mercaptopropionylglycine (MPG), a powerful superoxide anion scavenger, is able to enhance superoxide anion-mediated nitric oxide (NO) oxidative inactivation in aortic rings (12,15). In the present experiment, the response to 10−8–10−4 M acetylcholine was re-tested in aortic rings previously incubated with 10 µM MPG. The difference between acetylcholine-induced maximum relaxation values obtained with and without the presence of MPG was taken to represent the superoxide anion-mediated NO oxidative inactivation.

Cross sections of carotid arteries from the rats were stained with dihydroethidium (DHE, Beyotime Institute of Biotech, China) for evaluation of the in situ superoxide anion levels. The 5-µm sections were incubated for 30 minutes with 10 µM DHE, after which ethidium fluorescent images were obtained using an inverted microscope (Leica Microsystems, Germany) and quantified using image J software.

A commercial enzyme-linked immunosorbent assay (ELISA) kit (LMAI Bio., Shanghai, China) was employed to measure the levels of nitrotyrosine in the aortas of the rats in accordance with the instructions supplied with the kit.

Effects of PCA on body weight and FPG

Figure 1 Effects of protocatechualdehyde (PCA) on body weight (A) and fasting plasma glucose (FPG) (B). SD rats were intraperitoneally injected with a single dose of streptozotocin (STZ) (60 mg/kg body weight). One week later, rats displaying FPG 250 mg/dL were taken to be diabetic rats and were included in subsequent experiments. Control and hyperglycemic rats were randomly assigned to 4 groups (n=12 each group): the untreated control group (Con), the PCA-treated Con group (Con + PCA), the untreated STZ-induced diabetic group (STZ), the and PCA-treated STZ group (STZ + PCA). Rats in the two treatment groups were administered PCA via gavaging at a dose of 25 mg/kg/day for 6 weeks. Values are displayed as mean ± SD, n=12 per group. *P<0.05 vs. Con rats.

As shown in Figure 2A, the results of the aortic ring experiments revealed that the addition of acetylcholine after pre-contraction with phenylephrine induced relaxation responses in all groups of rats in a concentration-dependent manner. Acetylcholine-evoked endothelium-dependent relaxation was obviously decreased in the STZ rats compared with the Con rats. Treatment with PCA significantly ameliorated the impairment of the endothelial-dependent vasodilator response. Furthermore, no differences were observed between the four groups in terms of endothelium-independent vasorelaxation induced by sodium nitroprusside (Figure 2B).

Figure 2 Effects of protocatechualdehyde (PCA) on vascular relaxation responses to acetylcholine (A) and sodium nitroprusside (B). Values are displayed as mean ± SD, n=5–6 per group. *P<0.05 vs. Con rats; †P<0.05 vs. streptozotocin (STZ) rats.

As shown in Figure 3, the levels of aortic P-eNOS/total endothelial nitric oxide synthase (T-eNOS) expression and eNOS activity were decreased in the STZ rats compared to the Con rats. Treatment with PCA failed to ameliorate these effects. 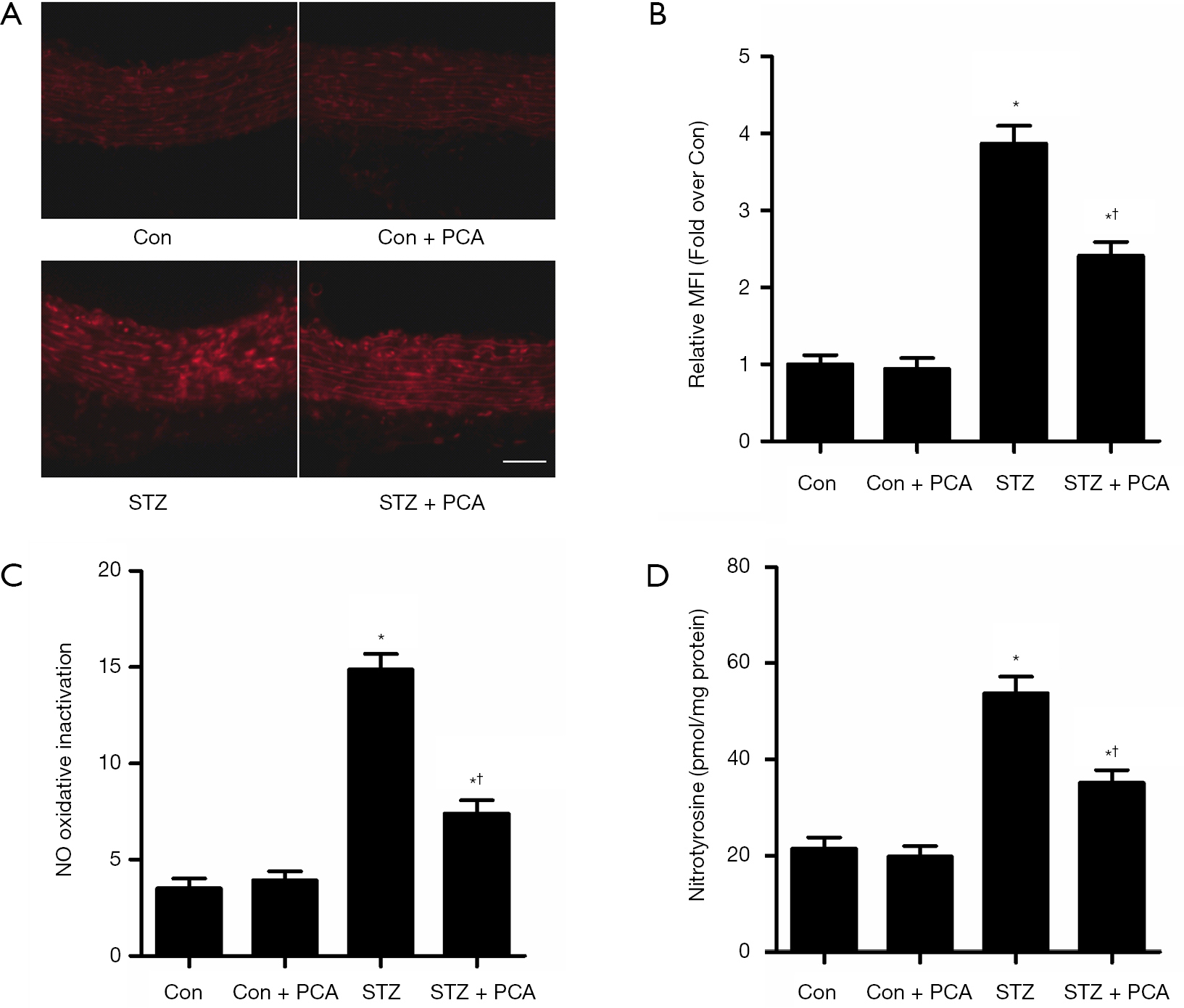 Figure 4 Effects of protocatechualdehyde (PCA) on vascular superoxide anion production, NO oxidative inactivation and nitrotyrosine level. (A) For evaluation of the in situ levels of superoxide anion, rat carotid arteries were stained with dihydroethidium (DHE). Bar =50 µm, magnification ×200. (B) The histogram represents the mean fluorescence intensity (MFI) in each group. n=6 per group. (C) The difference between acetylcholine-induced maximum relaxation values obtained in the absence and presence of MPG was taken to indicate superoxide anion-mediated nitric oxide (NO) oxidative inactivation. n=5–6 per group (D) Aortic nitrotyrosine level was assessed using ELISA. n=6 per group. Values are displayed as mean ± SD, *P<0.05 vs. Con rats; †P<0.05 vs. streptozotocin (STZ) rats.

Effects of PCA on the protein expression of vascular p22phox, p47phox and Cu/Zn-SOD and the activity of NADPH oxidase and total SOD

As shown in Figure 5, the aortic expression of the NADPH oxidase subunits p22phox and p47phox was up-regulated in the STZ rats, compared to that in the Con rats. However, PCA treatment markedly decreased the protein expression of p22phox and p47phox. Furthermore, the activity of vascular NADPH oxidase was significantly higher in the STZ rats, and this increase was obviously ameliorated by PCA treatment (Figure 6A). 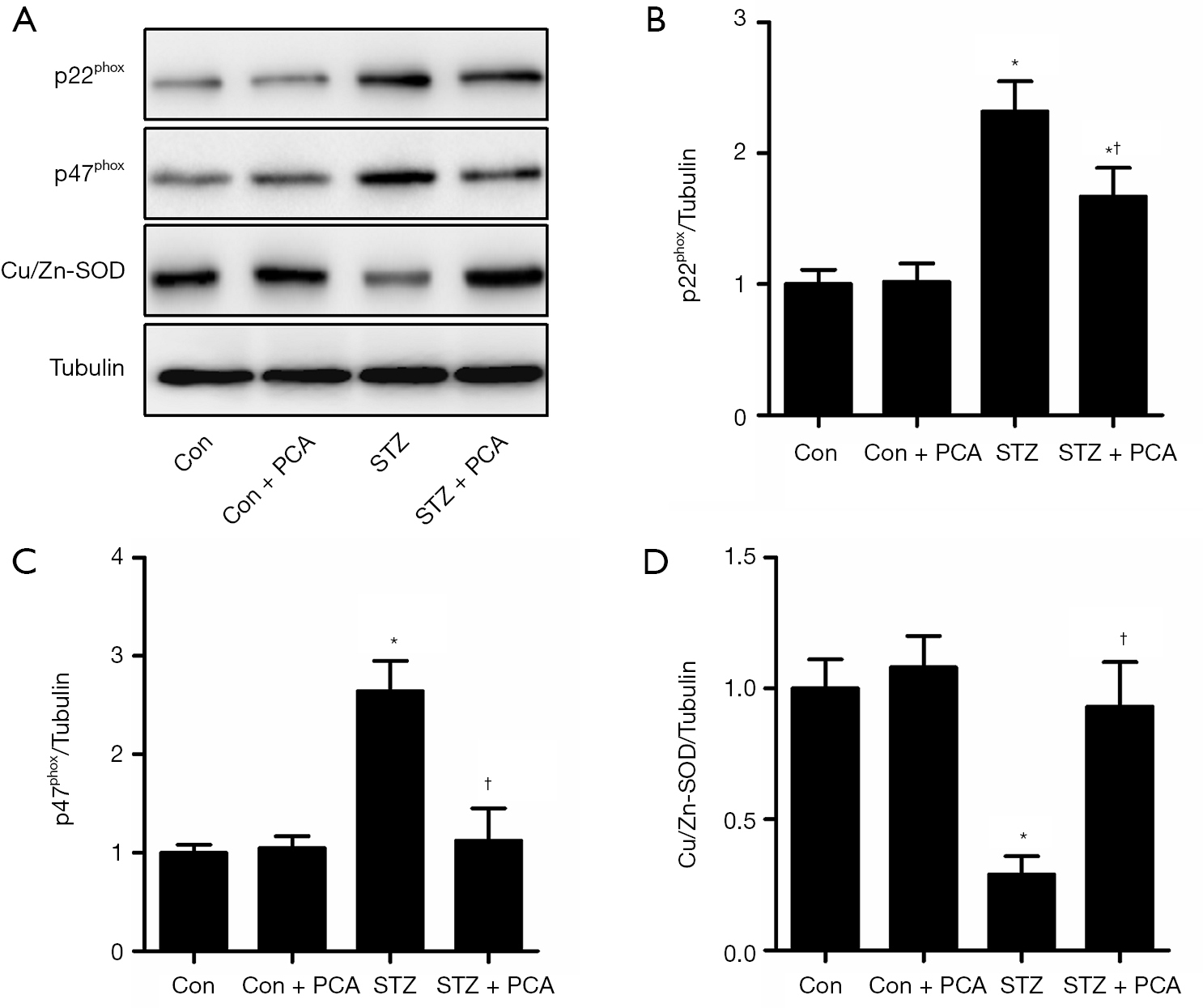 Intraperitoneal injection of STZ induced a significant elevation of plasma glucose levels in rats, which was associated with the impairment of endothelium-dependent relaxation. Treatment with PCA for 6 weeks significantly ameliorated the impairment of acetylcholine-evoked endothelium-dependent relaxation. This beneficial effect is evidently unrelated to the correction of hyperglycemia, because PCA treatment did not significantly affect blood glucose content in DM rats.

The NOS-produced signaling molecule NO has vital involvement in numerous physiological processes, such as vasodilation, neuronal transmission, and immune responses (19,20). A reduction in NO bioactivity is the most typical characteristic of endothelial dysfunction, and is mainly attributable to an eNOS-induced decrease in NO synthesis, as well as an increase in superoxide anion-induced NO oxidative inactivation (13,17). Consistent with the findings of previous studies (4,21), this study found that the levels of aortic P-eNOS/T-eNOS expression and eNOS activity were decreased in STZ rats. However, PCA treatment had no effect on P-eNOS expression or eNOS activity, indicating that the improvement of aortic NO bioactivity cannot be attributed to endothelial NO synthesis.

Superoxide anion, one of the most important vasoactive oxygen species, reacts with NO to produce peroxynitrite, which results in NO oxidative inactivation (7). In the present study, the STZ rats displayed increased vascular superoxide anion production and an elevated level of aortic nitrotyrosine. The decrease in acetylcholine-induced relaxation in the STZ-induced diabetic aorta was significantly rescued by incubation with MPG. However, NO oxidative inactivation reflected the difference between ACh-induced maximum relaxation values calculated with and without the presence of MPG (4), and this value was lower in PCA-treated rats than in STZ rats. PCA has been previously demonstrated to decrease the DNA oxidation biomarker 8-hydroxygluanine in human lens epithelial cells following incubation with methylglyoxal (11). Furthermore, the aortas of PCA-treated diabetic rats displayed decreased superoxide anion generation and nitrotyrosine levels. These data indicate that the improvement in NO oxidative inactivation may be the main reason for the rise in aortic NO bioactivity observed after PCA treatment.

Superoxide anion is produced by NADPH oxidase and eliminated by endogenous antioxidant SOD. NADPH-oxidases are considered to be the most important source of superoxide anion in the vessel wall (13,14). Cytosolic Cu/Zn-SOD, mitochondrial Mn-SOD and extracellular SOD enzymes are involved in the scavenging of superoxide anion and play important roles in balancing ROS generation. The total SOD activity and extracellular Cu/Zn-SOD expression were reduced in the aorta of long-term diabetic rats (22). In the present study, elevated aortic Cu/Zn-SOD expression and SOD activity, along with decreases in NADPH oxidase subunits p22phox and p47phox expression and NADPH oxidase activity, were observed in diabetic rats following PCA treatment. Therefore, by protecting aortic endothelium against oxidative stress, PCA may avert the breakdown of NO, thus improving vascular function.

In conclusion, our results suggest that PCA has the protective effects against oxidative stress and restores endothelial function in STZ-diabetic rats. These effects are attributable, at least in part, to an improvement in vascular NO oxidative inactivation induced by PCA. These findings indicate that PCA may be useful to improve vascular function in patients with DM. Nonetheless, it is noteworthy that our findings were mainly based on rodent models. Therefore, further study is needed to evaluate the effects of PCA on vascular function in patients with DM.

Funding: The current study was supported by a grant from the Science and Technology Bureau of Wenzhou (grant No. Y20170646).

Reporting Checklist: The authors have completed the ARRIVE reporting checklist. Available at http://dx.doi.org/10.21037/atm-21-1431

Conflicts of Interest: All authors have completed the ICMJE uniform disclosure form (available at http://dx.doi.org/10.21037/atm-21-1431). The authors have no conflicts of interest to declare.

Ethical Statement: The authors are accountable for all aspects of the work in ensuring that questions related to the accuracy or integrity of any part of the work are appropriately investigated and resolved. Experiments were performed under a project license (No.: 201700103) granted by the Wenzhou Medical College Animal Policy and Welfare Committee. All animal experiments complied with the Wenzhou Medical College Guidelines on the Care and Use of Laboratory Animals.