Preeclampsia (PE), pregnancy-induced hypertension (PIH), hyperemesis gravidarum (HG), and anemia of pregnancy are serious disorders occurring during pregnancy, which have adverse effects on both maternal and fetal safety. Poor fetal development, indicated by a low biparietal diameter and small head circumference as well as a low birth weight and short body length at birth, are associated with neonatal death. However, the etiology and the pathogenesis of pregnancy-related diseases and poor fetal development are still poorly understood. Diabetes mellitus (DM) and infection may play roles in the etiology and pathogenesis of pregnancy-related complications and poor development of a fetus.

Helicobacter pylori (H. pylori) is a gram-negative bacterium with a specific tropism for the gastric mucosa (1). It has been found to be the main cause of chronic gastric diseases (2). Almost half of the world’s population is infected with H. pylori infection, with the infection rates being higher in developing countries (3,4). According to 2015 estimates, approximately 4.4 billion people suffer from H. pylori infection globally (5). In recent years, studies of H. pylori have become increasingly extensive, and the relationships between H. pylori and various extragastric diseases have gradually been reported (6), including pregnancy-related diseases, such as HG, PE, fetal growth restriction (FGR), premature delivery, abortion, and fetal malformation (7-10). Pregnant women are one of the groups most vulnerable to H. pylori infection (11), and a meta-analysis by Azami et al. reported the global incidence of H. pylori infection in pregnant women to be 46% (12).

Diabetes in pregnancy (DIP) includes pre-pregnancy diabetes mellitus (PGDM) and gestational diabetes mellitus (GDM). According to statistics from the United States, the incidence of DIP was 7%, with GDM accounting for 86% of DIP cases (13). Due to poor control of blood glucose before and during pregnancy, DIP can significantly increase the risk of adverse pregnancy outcomes (14,15), such as miscarriage, stillbirth, premature birth, low birth weight, macrosomia, and neonatal death. Therefore, it poses a serious public health issue around the world. For DIP patients with H. pylori infection, it has not yet been established whether having the double hazards of high blood glucose and H. pylori infection further promotes the occurrence of pregnancy-related diseases and poor fetal development. It is also unclear whether H. pylori screening and eradication therapy is necessary before pregnancy. Therefore, we designed this prospective study to determine the association of H. pylori infection with pregnancy-related diseases and fetal development in women with DIP. We present the following article in accordance with the STROBE reporting checklist (available at http://dx.doi.org/10.21037/atm-21-1209).

All women who underwent regular prenatal examinations in the perinatal health center of our hospital between June and December 2019 were recruited before reaching 16 weeks of gestation. According to their medical history and the results of a 75 g oral glucose tolerance test at the 24th week of pregnancy, the participants were divided into a normal control group (NC group), a GDM group, and pre-pregnancy diabetes mellitus group (PGDM group). According to the results of an H. pylori serum antibody detection test, each group was further divided into two subgroups: an H. pylori positive subgroup (HP+ subgroup) and an H. pylori negative group (HP− subgroup). All participants were given diabetes-related education, guidance on diet and exercise, and regular hypoglycemic therapy. Insulin therapy was given to participants whose blood glucose was unsatisfactory after diet and exercise control. Participants were followed up by telephone once a month until 1 month postpartum.

All procedures performed in this study involving human participants were in accordance with the Declaration of Helsinki (as revised in 2013). The study was approved by the Ethics Committee of the Second Affiliated Hospital of Zhengzhou University (No.: 2018047) and informed consent was taken from all the patients.

Participant data including age, weight, blood pressure, and the levels of fasting plasma glucose (FPG), glycated hemoglobin (HbA1c), alanine aminotransferase (ALT), aspartate aminotransferase (AST), γ-glutamyl transpeptidase (γ-GGT), creatinine (Cr), and urea were collected at recruitment. Blood pressure and urinary protein levels were measured in different periods of pregnancy for the diagnosis of PIH and PE. Participants’ weight and urine ketone levels were recorded in different periods of pregnancy for the diagnosis of HG. For the diagnosis of anemia of pregnancy, the level of hemoglobin (Hb) was measured, and the serum ferritin level was further detected when Hb <105 g/L. The fetal developmental status (including the biparietal diameter, head circumference, abdominal circumference, and femur length) were measured in the 2nd trimester and at the end of the pregnancy. The gestational age and the newborn status (including the Apgar score, weight, and body length of the neonate) were also recorded.

At recruitment, 2 to 5 mL of venous blood was collected from participants’ elbows after 8 to 12 hours of fasting. The serum was separated by centrifugation immediately after clotting and stored at −20 °C. An enzyme-linked immunosorbent assay (ELISA) kit was used to detect antibodies against H. pylori in each serum sample, including cytotoxic (CagA), vacuolating toxin (VacA), and urease subunit A and B antibodies.

A total of 356 pregnant women were recruited before 16 weeks of gestation and were divided into the NC group (n=208 cases), the GDM group (n=86 cases), and the PGDM group (n=62 cases) according to their medical history and the results of a 75 g oral glucose tolerance test at the 24th week of pregnancy.

At participant recruitment, the levels of FPG and HbA1c were significantly higher in the GDM and PGDM groups than in the NC group (P<0.05). However, no significant differences existed between the three groups with respect to age, weight, blood pressure, ALT, AST, γ-GGT, Cr, urea, or Hb (P>0.05) (Table 1). After hypoglycemic treatment, the FPG and HbA1c levels were similar between the groups (P>0.05).

According to the results of H. pylori antibody detection, each group was further divided into two subgroups: the H. pylori positive group (HP+ subgroup) and the H. pylori negative group (HP− subgroup). None of the HP+ and HP− subgroups in any of the groups showed significant differences in terms of age, weight, blood pressure, ALT, AST, γ-GGT, Cr, urea, Hb, FPG, or HbA1c (P>0.05).

In the NC group, none of the indexes showed a significant difference between the NC-HP+ subgroup and NC-HP− subgroup in the 2nd trimester of pregnancy (P>0.05). However, at the end of pregnancy, the biparietal diameter, head circumference, abdominal circumference, Apgar score, and neonatal weight were significantly higher in the NC-HP− subgroup than in the NC-HP+ subgroup (P<0.05), although there were no significant differences in femur length or neonatal body length between the two subgroups (P>0.05) (Table 4). 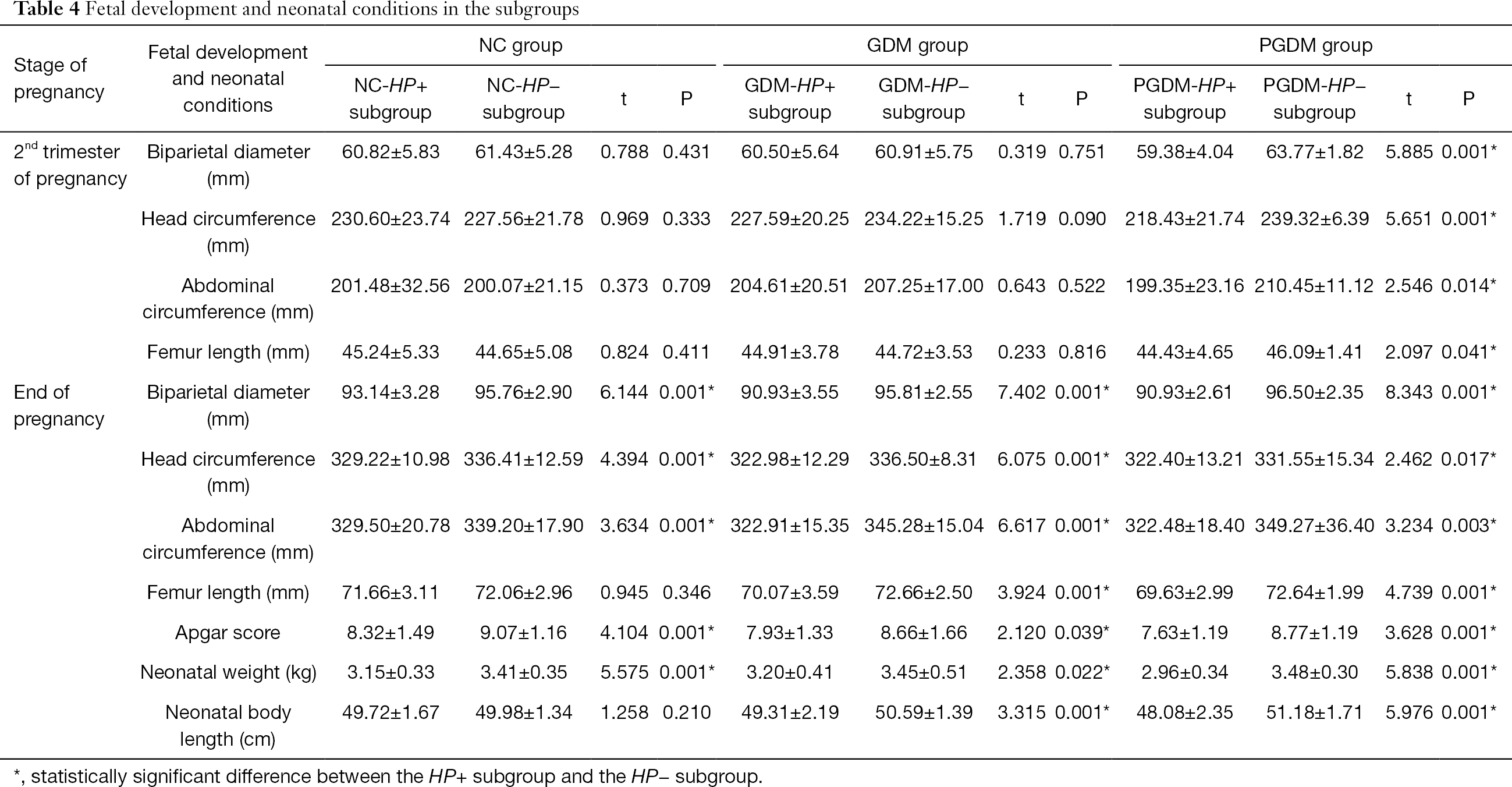 There are many methods to detect Helicobacter pylori, including serological examination, C13 and C14 breath test, gastric mucosal biopsy and so on. C13 and C14 are radioisotopes and may cause potential health hazards to pregnant women. Gastric mucosal biopsy under gastroscope is invasive examination. Pregnant women will be more worried, which will lead to further reduction of sample size and it is too difficult to implement. Due to the advantages of being simple, inexpensive, and non-invasive, serological detection is the first choice for the diagnosis of H. pylori infection during pregnancy. The IgG antibody may reflect a current infection or prior exposure (23). The sensitivity and specificity of IgG antibody are reported to be 80–100% and 69–95%, respectively (24-26). CagA protein and VacA protein are the main markers of H. pylori toxicity (27). According to the presence or absence of CagA protein, H. pylori infections can be divided into two types: type I is a highly toxic strain with CagA, and type II is a strain without CagA. Infection with type I H. pylori can lead to duodenal ulcers, gastric cancer, and extragastric diseases (28). Our study showed that H. pylori infection was extremely common in women with DIP. The H. pylori infection rate in the GDM group and the PGDM group was 62.8% and 64.5%, respectively, and the infection rate of type I H. pylori specifically was 40.7% in the GDM group and 38.7% in the PGDM group; these rates were significantly higher than those in NC group. Therefore, it is suggested that DM can increase H. pylori exposure and the infection rate in pregnancy. The main reasons for this are that DM causes damage to cellular and immune functions, and enhances sensitivity to infection (29). Furthermore, it can weaken gastrointestinal peristalsis and acid secretion, thus promoting the colonization and infection of pathogens in the intestine (30). Due to immune adaptation during pregnancy (31), pregnant women are susceptible to H. pylori infection (32). When pregnancy is complicated with DM, the risk of infection further increases.

Results of studies on the relationship between DM and adverse pregnancy outcomes have been relatively consistent (14,15). High blood glucose can cause maternal and fetal complications, such as spontaneous abortion, fetal malformation, preeclampsia, stillbirth, macrosomia, neonatal hypoglycemia, and neonatal hyperbilirubinemia, which can seriously affect the health of the mother and infant. Infection might play a role in the etiology and pathogenesis of pregnancy complications and poor fetal development in DIP. In this study, the high infection rate of type I H. pylori in particular may have contributed to the higher incidences of pregnancy-related diseases in the GDM and PGDM groups. We further compared the incidence rates of pregnancy-related diseases and fetal development between the HP+ and HP− subgroups in each group. The results showed that H. pylori infection could increase the incidences of pregnancy-related diseases and hinder fetal development.

H. pylori may participate in the pathogenesis of gestational diseases through a variety of mechanisms. First, H. pylori absorbs essential nutrients from the host, including iron, vitamin B12, and folic acid, which leads to the malabsorption of nutrients in pregnancy, ultimately resulting in severe iron deficiency anemia; gestational anemia is an important factor in fetal development. Second, H. pylori can also lead to systemic endothelial dysfunction by inducing inflammation and oxidative stress, and it participates in the pathogenesis of PE (33). In vitro experiments have shown that these anti-CagA antibodies mainly recognize the antigens located on the surface of endothelial cells. Trophoblast cells have been found to mainly show an endothelial phenotypic profile. The antibodies cross-react with trophoblast cells, reducing the invasive ability of placental trophoblasts (34,35). Therefore, CagA-positive H. pylori strains do not only aggravate the inflammatory reaction in the body during pregnancy, but also cause the typical placental abnormalities in PE. Third, several non-genital tract infections, by way of maternal bacteremia and transplacental passage, can cause an intrauterine infection, leading to premature delivery (36-38); H. pylori infection may induce premature delivery through a similar pathway.

Anemia in pregnancy is an important factor that endangers the health of the mother and infant. It is associated with premature delivery and a low birth weight (39). PE is a type of PIH. Approximately 10% of women suffer from hypertension during pregnancy, among which PE accounts for 2% to 8% (40). Moreover, approximately 10% to 15% of maternal death is directly related to PE (41). Premature delivery accounts for 75% of perinatal mortality and more than half of long-term morbidity in infants (42,43). Therefore, H. pylori infection not only causes pregnancy-related diseases, but also results in poor fetal development and adverse pregnancy outcomes.

Funding: This work was supported by the Medical Science and Technology Research Plan of Henan Province in 2018 (grant No. 2018020146).

Reporting Checklist: The authors have completed the STROBE reporting checklist. Available at http://dx.doi.org/10.21037/atm-21-1209

Conflicts of Interest: All authors have completed the ICMJE uniform disclosure form (available at http://dx.doi.org/10.21037/atm-21-1209). The authors have no conflicts of interest to declare.

Ethical Statement: The authors are accountable for all aspects of the work in ensuring that questions related to the accuracy or integrity of any part of the work are appropriately investigated and resolved. All procedures performed in this study involving human participants were in accordance with the Declaration of Helsinki (as revised in 2013). The study was approved by the Ethics Committee of the Second Affiliated Hospital of Zhengzhou University (No.: 2018047) and informed consent was taken from all the patients.