Olfaction is the oldest sensory function of human beings and is essential to human survival (1). The olfactory system not only enables humans to perceive their environment, but also plays an important role in social interaction (2-4) and food intake (5). Therefore, decreased olfactory function can lead to a decline in quality of life (6,7), and even depression (8,9). Olfactory dysfunction is mainly result from chronic sinonasal diseases, head trauma, upper respiratory infections, and neurodegenerative diseases (10). Studies have shown that olfactory dysfunction is also an early biomarker of certain diseases, such as COVID-19 (11,12) and Alzheimer’s disease (13,14). The current diagnosis and classification of olfactory dysfunction mainly rely on psychophysical olfactory tests that evaluate human olfactory function from three aspects: odor threshold (OT), odor discrimination (OD) and odor identification (OI) (15-18). Based on analysis of these three capabilities, a large number of olfactory function tests have been developed since the 1990s. Olfactory tests that are used worldwide include the Connecticut Chemosensory Clinical Research Center (CCCRC) test (19,20), the University of Pennsylvania Smell Identification Test (UPSIT) (21,22), Sniffin’ sticks (23,24), T&T test (25),Scandinavian Odor-Identification Test (SOIT) (26), San Diego Odor Identification Test (SDOIT) (27), and the Cross-Cultural Smell Identification Test (CC-SIT) which was developed on the basis of UPSIT (28,29).

The OI task relies on olfactory detection ability, executive function and semantic memory, which are more cognitively loaded than the OT and OD tests (30,31). Testing OI has been used in clinical settings to diagnose various causes of olfactory disorders and is more sensitive than OT and OD for detecting neurodegenerative diseases, including Parkinson’s and Alzheimer’s diseases (32,33). However, patients often complain that they are not familiar with certain odors, such as cloves, pine resin, raspberry and Japanese cypress, which is related to cultural differences (34). In order to solve this problem for the Chinese, researchers have modified the choice of odors to make the tests more suitable (35-38), but these tests are not widely used in mainland China. Any new olfactory function test should not only consider familiarity with odors but also the ease of use and cost. Too cumbersome and expensive tests will not meet clinical needs in China. Therefore, we developed a Chinese OI test (COIT) based on Sniffin’ sticks and defined the cutoff values of the COIT for diagnosing hyposmia and anosmia in Chinese people. Finally, we tested its reliability and validity in clinical settings in China.

Two widely used olfactory tests were selected to evaluate the diagnostic efficacy of the COIT. In the CC-SIT developed by the University of Pennsylvania, odorants are microencapsulated on the test paper (28) and the subject uses a pencil to scratch the microcapsule coating to release the odor, which is then selected from four options. The test consists of 12 odorants, with a maximum score of 12. The other test was the Sniffin’ Sticks test, which comprises felt-tip pen-like devices containing the odorants, called “sticks”, and has three parts, namely OT, OD and OI (24). Each part contains 16 questions, with a maximum score of 48. During the test, the lid of the pen was opened and the pen tip placed approximately 2 cm under the subject’s nostrils for 2–3 s. During the OI test, the subject is given an olfactory stick containing the target odor and asked to select the target odor from four options after sniffing. The steps for using COIT are the same as the Sniffin’ Sticks identification test. A choice must be made even if the subject indicates that he cannot smell the odor or cannot accurately identify the target odor (23,24).

Odorants used in the COIT were purchased from the Apple Flavor and Fragrance Group (Shanghai, China). Similar to the Sniffin’ Sticks identification test, we dropped 1 mL of each liquid odorant onto a felt-tip pen (Burghart Messtechnik, Wedel, Germany) (23). Only chocolate needed to be diluted with water at a ratio of 1:1 to ensure a similar odor intensity to the other odorants.

Our study consisted of three experiments. The goal of Experiment 1 was to develop a COIT based on the Sniffin’ Sticks identification test. A total of 344 people with normal olfactory function participated in this experiment, which was divided into two steps. In the first step, we tested the volunteers with the Sniffin’ Sticks and calculated the correct identification rate for each odor. Those with a correct identification rate <75% were to be replaced with odors that are more familiar to Chinese people. In the second step, we tested 12 common Chinese odors on the volunteers and told them the corresponding objects: chocolate, cream, sesame oil, Osmanthus, jasmine, almond, lychee, bacon, green tea, honey, chrysanthemum and tangerine peel. We then asked the volunteers to select the three most familiar odors and rank them. The odors with higher familiarity were used to develop the COIT (26,39).

In Experiment 2, we validated the COIT against two most widely used olfactory function tests in the world, the Sniffin’ Sticks (response alternatives translated to simplified Chinese, including OT, OD, and OI) and CC-SIT (simplified Chinese version, 12 items), in a group of 120 participants (60 patients, 60 healthy controls). In addition to the score of each test, we also recorded the time taken for each test. The goal of Experiment 3 was to assess the reliability of the COIT. We retested the 60 normal volunteers who had participated in Experiment 2 with the COIT 3 months after Experiment 2.

The Pearson correlation coefficient was applied for correlation analysis of the three olfactory function tests and analysis of the test-retest reliability. The paired t-test was used for analysis of the difference between the two COIT tests separated by 3 months. A receiver operating characteristic (ROC) curve was generated to identify the best cutoff point for diagnosing hyposmia and anosmia. Analyses were performed using SPSS statistical software version 17.0 (IBM, Armonk, NY, USA).

Development of the COIT 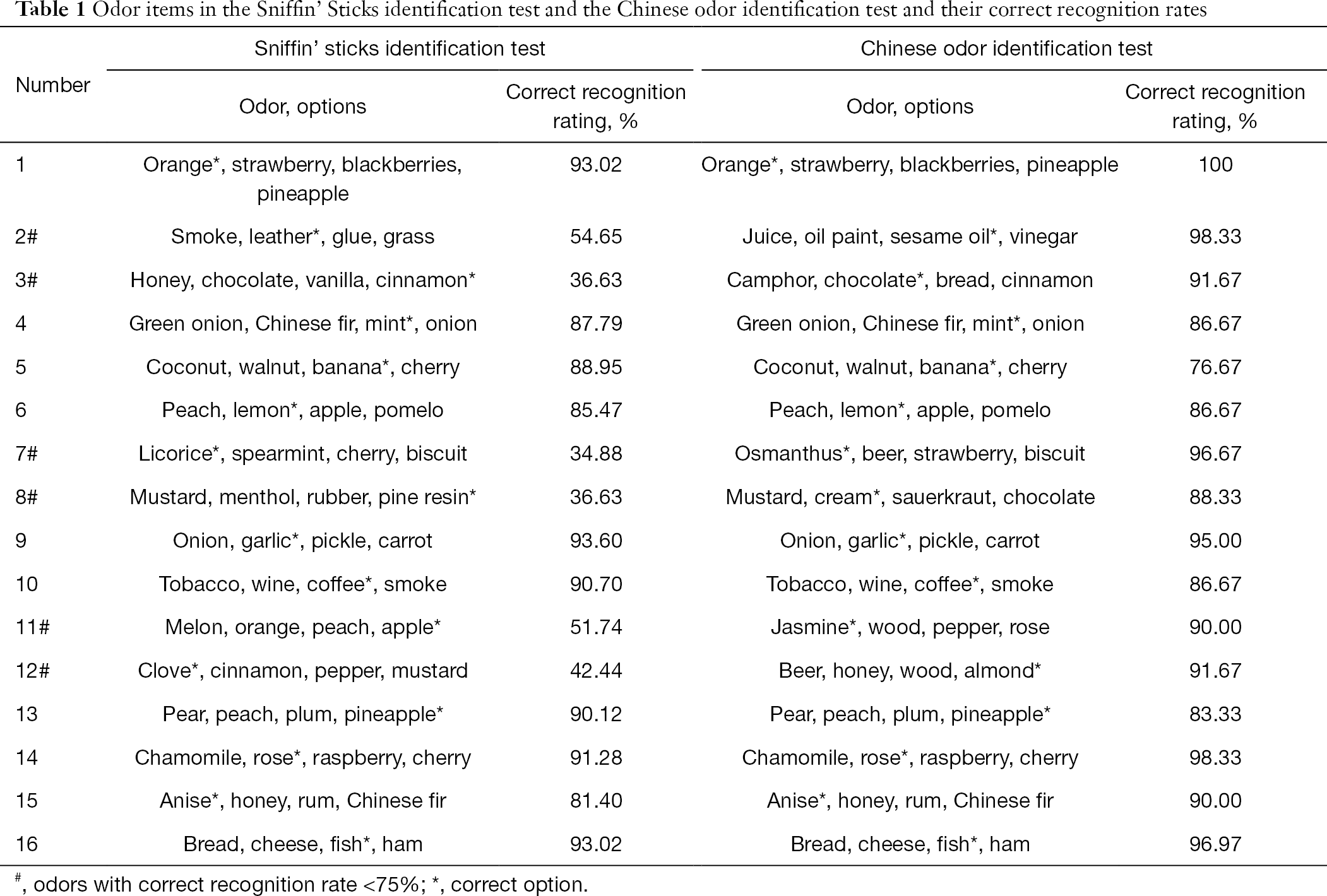 Validity and cutoff value of COIT

In Experiment 2, 60 volunteers with normal olfaction and 60 patients with olfactory dysfunction participated. Specifically, 23 patients suffered from anosmia (TDI <16.5) (24), and 37 suffered from hyposmia (TDI ≥16.5) (24). The correct rate of identification of each item in the COIT was higher than 75% among the volunteers (Figure 2). Table 2 shows the comparison of the three olfactory function tests. We found that the COIT score significantly correlated with both the Sniffin’ Sticks score (r=0.755, P<0.0001, Figure 3A) and CC-SIT score (r=0.7462, P<0.0001, Figure 3B). These results suggested that the COIT can be used to evaluate the olfactory function of Chinese people, and has better cultural applicability. 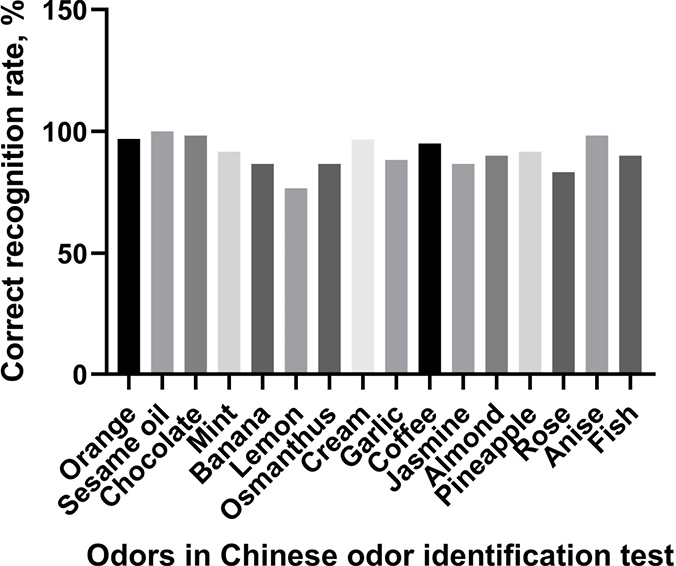 Next, a ROC curve was used to evaluate the accuracy of COIT in diagnosing olfactory dysfunction. We also defined the cutoff values of the COIT for diagnosing hyposmia and anosmia in Chinese people. The COIT showed high accuracy to distinguish between normal olfactory function and olfactory disorders [area under the curve (AUC) =0.8896, P<0.0001, Figure 4] and further subdivided olfactory disorders into hyposmia and anosmia (AUC =0.9753, P<0.0001, Figure 5). The evaluation indexes for the cutoff points are given in Table 3. A higher Youden index (sensitivity + specificity − 1) indicated a higher diagnostic ability. As shown in Table 3 normal olfactory function is indicated if the COIT score is ≥12 (specificity 76.7%, sensitivity 86.7%, Youden index 0.634), <7 indicates anosmia (specificity 94.6%, sensitivity 100%, Youden index 0.946), and between 7 and 12 indicates hyposmia. 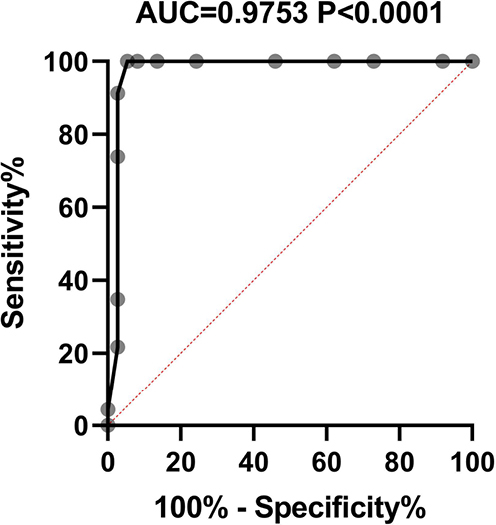 In Experiment 3, we quantified the test-retest reliability of the COIT. Specifically, the 60 normal volunteers who participated in Experiment 2 were tested twice with COIT, with an interval of 3 months. The retest COIT scores strongly correlated with those obtained the first time (r=0.8281, P<0.001, Figure 6A), and there was no significant difference between the two test results (t=1.187, P=0.24, Figure 6B). These results indicated that the COIT is highly stable.

Figure 6 Reliability of the Chinese odor identification test (COIT). Test-retest correlation between the COIT scores with an interval of 3 months (A). The difference between the test and retest scores (B).

Our novel COIT showed excellent results for examination of olfactory function in China because all of the 16 odors can be easily recognized by Chinese people. The six odors with a low correct recognition rate in the Sniffin’ Sticks identification test [i.e., Leather (54.65%), Cinnamon (36.63%), Licorice (34.88%), Pine resin (36.63%), Apple (51.74%), and Clove (42.44%)] are unfamiliar to most Chinese people, as they do not use these substances in their daily lives. Therefore, we first asked the volunteers to smell familiar odors and then told them the corresponding substances to ensure correct identification (39). We then asked the volunteers to rank these odors according to their familiarity and in this way, we selected 16 suitable odors to form the COIT, which we then verified in Experiment 2.

The COIT scores were highly correlated with both the Sniffin’ Sticks and the CC-SIT scores. The sensitivity of using the COIT to distinguish between normal olfactory function and olfactory disorders was as high as 86.7%, and was even as high as 100% when subdividing olfactory disorders into hyposmia and anosmia, which fully demonstrated the effectiveness of the COIT. Furthermore, the COIT was highly stable, with a test-retest reliability of 0.8281, which is comparable to many widely used olfactory function tests, such as UPSIT (r=0.92) (21), Sniffin’ Sticks (r=0.73) (23), SOIT (r=0.79) (26) and SDOIT test (r=0.85) (27).

In addition to cultural applicability, the COIT has other characteristics that make it more suitable for use in China. It takes a very short time compared with the Sniffin’ Sticks test. In Experiment 2, the average time for 120 volunteers to complete the Sniffin’ Sticks test was 1,135.3±151.3 s, whereas the COIT only took 167.9±18.4 s. This time-saving aspect makes the COIT very suitable for the busy clinician. Although the CC-SIT test is equally efficient (220.3±87.9 s, Experiment 2), it is a disposable olfactory test tool and the high price has prevented it from being widely used in China, whereas the COIT can be reused. In summary, we believe that the COIT is an accurate, effective and stable olfactory test, suitable for the unique Chinese cultural background.

Reporting Checklist: The authors have completed the MDAR checklist. Available at http://dx.doi.org/10.21037/atm-21-913

Conflicts of Interest: All authors have completed the ICMJE uniform disclosure form (available at http://dx.doi.org/10.21037/atm-21-913). The authors have no conflicts of interest to declare.

Ethical Statement: The authors are accountable for all aspects of the work in ensuring that questions related to the accuracy or integrity of any part of the work are appropriately investigated and resolved. The study was approved by the Institutional Review Board of Beijing Anzhen Hospital (NO.: 2018087X). All procedures performed in this study involving human participants were in accordance with the Declaration of Helsinki (as revised in 2013). Informed consent was taken from all the patients.