A considerable number of critically ill myocardial infarction (MI) patients are admitted to intensive care units (ICUs), resulting in a significant health-care cost burden worldwide (1). However, not all of these patients benefit from ICU care, and thus an evaluation indicator to identify MI patients with a higher risk of mortality is crucial. Yet, several frequently used scoring systems to evaluate the prognoses of patients in ICU, such as the Simplified Acute Physiology Score (SAPS), were established according to the population excluding patients in the coronary care unit (2-5). Thus, it is necessary to determine some readily measured parameters for physicians to identify high-risk MI patients and triage this high-risk population to a standard intensive care, which may benefit MI patients in ICU and achieve a better prognosis.

Resting heart rate (HR), a physical sign of autonomic cardiac regulation and a reflection of cardiac function, such as cardiac output and sinoatrial node automaticity, is a well-established biomarker that predicts the outcomes of multiple heart disease (6,7). An elevated HR was reported to be associated with both higher short-term and longer-term mortality in acute MI patients (8,9). A positive correlation was observed between HR and mortality in patients with acute MI when they are admitted to the hospital (10). Recently, a U-shaped association was found to exist between HR and mortality in a hypertensive cohort (11), and this relationship was also observed between HR and mortality in atrial fibrillation patients (12), which indicated that a HR above or below an appropriate level may suggest poor prognosis. However, in MI patients, it is unknown whether bradycardia, which is frequently found during the first 24 hours of admission (13), confers a clinical risk in that cohort. In the present study, HR was measured at least one time per hour in the first 24-hour period, and the minimal value was defined as minimal heart rate (MHR). We aimed to understand whether MHR may also serve as a predictive value for prognosis in ICU patients.

To address this question, we conducted a retrospective cohort study and sought to determine the association between MHR and risk of mortality in critically ill MI patients based on the Medical Information Mart for Intensive Care (MIMIC-III) database. A multivariable Cox hazard ratio regression model and restricted cubic spline model were performed in our study. Furthermore, sensitivity analyses were conducted to evaluate the robustness and reliability of our results.

We present the following article in accordance with the STROBE reporting checklist (available at http://dx.doi.org/10.21037/atm-21-992).

The data in this study were extracted from the MIMIC-III database (14). Briefly, the MIMIC-III database is a public critical care database that contains records from 53,423 ICU admissions to the Beth Israel Deaconess Medical Center from 2001 to 2012 (14). The establishment of this freely available database was approved by the Massachusetts Institute of Technology (MIT) and the Institutional Review Boards (IRB). The MIMIC-III database documents are comprised of charted events including demographics data, laboratory tests, fluid balance, vital status and blood gas analysis data, discharge summaries, electrocardiograph, imaging examinations, and diagnostic information such as the International Classification of Diseases, Ninth Revision (ICD-9). We included ICU patients diagnosed with MI using ICD-9 diagnosis codes, and a total of 2,031 patients were considered eligible for inclusion in this study.

The study was conducted in accordance with the Declaration of Helsinki (as revised in 2013).

Categorical data were presented as a number (percentages), while continuous data were presented as the mean ± standard deviation or median (interquartile range), as appropriate. The differences in categorical variables between the two groups were detected by the Chi-square test. The Student t-test or rank-sum test was applied to assess continuous variables between the two groups, as appropriate.

The potential non-linear relationships between MHR as a continuous variable and crude hazard ratio or adjusted hazard ratio were assessed by cubic splines analysis.

Furthermore, sensitivity analysis was conducted to determine the impact of various subgroups, classified by different admission HR, hypertension, atrial fibrillation, and vasopressor use, on our results. 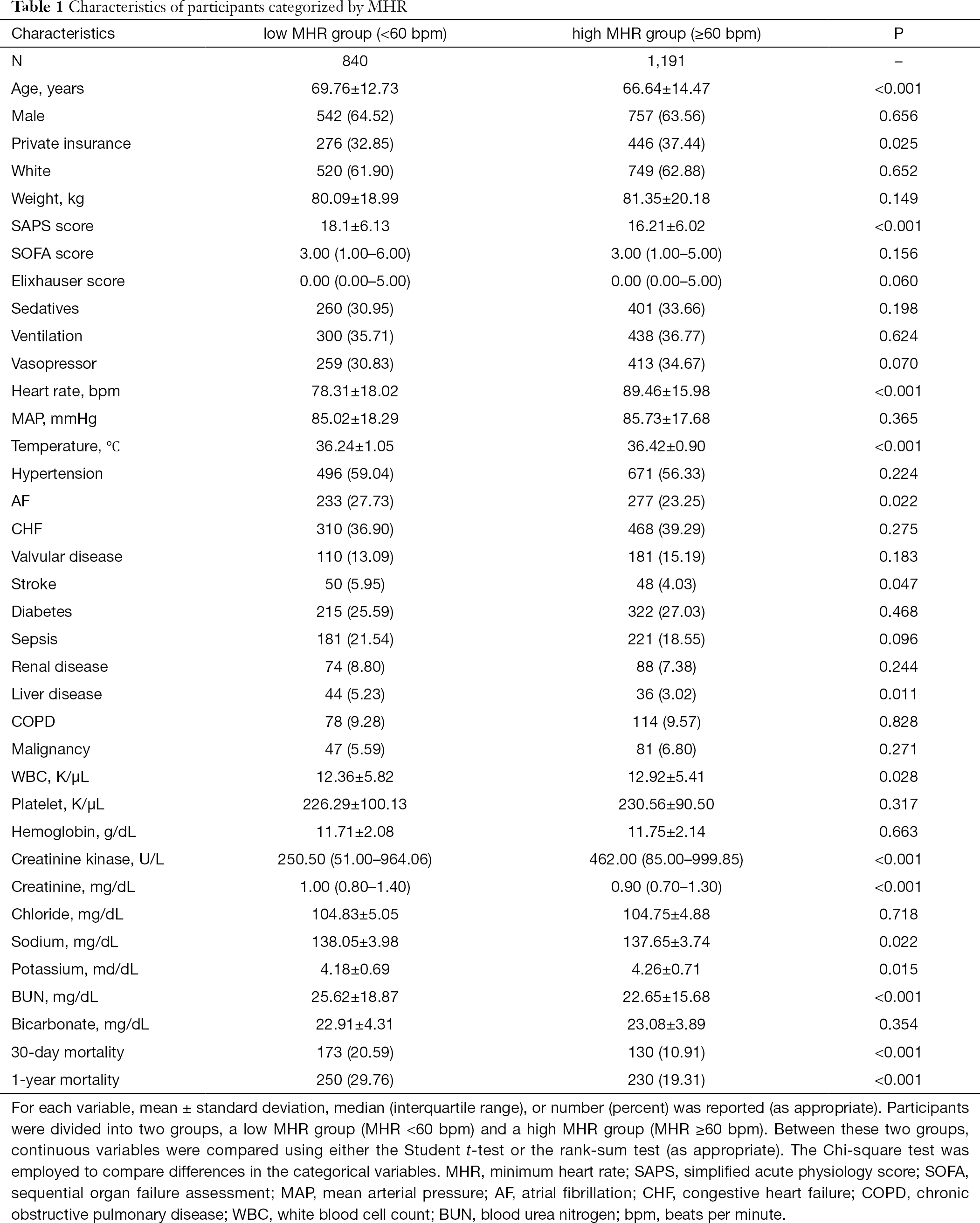 A Cox proportional hazards model was performed to evaluate the association between MHR and the outcomes of MI patients. Model 1, adjusted for age and private insurance, indicated that the low MHR group had a higher risk for 30-day mortality and 1-year mortality than the high MHR group (each P<0.05). After further adjustment for a series of covariates in model 5, the higher risk of 30-day mortality and 1-year mortality remained significant in the low MHR group with hazard ratios of 1.779 [95% confidence interval (CI), 1.400–2.261] and 1.537 (95% CI, 1.272–1.859), respectively (Table 2).

Non-linear association between MHR and outcome

By using restricted cubic spline analysis, we observed an apparent non-linear relationship between MHR and the outcome of MI patients in ICU (with 60 bpm as a reference). The relationship between MHR and outcome was similar in patients with or without adjusted variables, which could be characterized as a typical L-curve (Figure 1). Results from the cubic spline model suggested that MI patients in both groups had a higher 30-day mortality and 1-year mortality than the bottom of the curve, especially in the low MHR group. 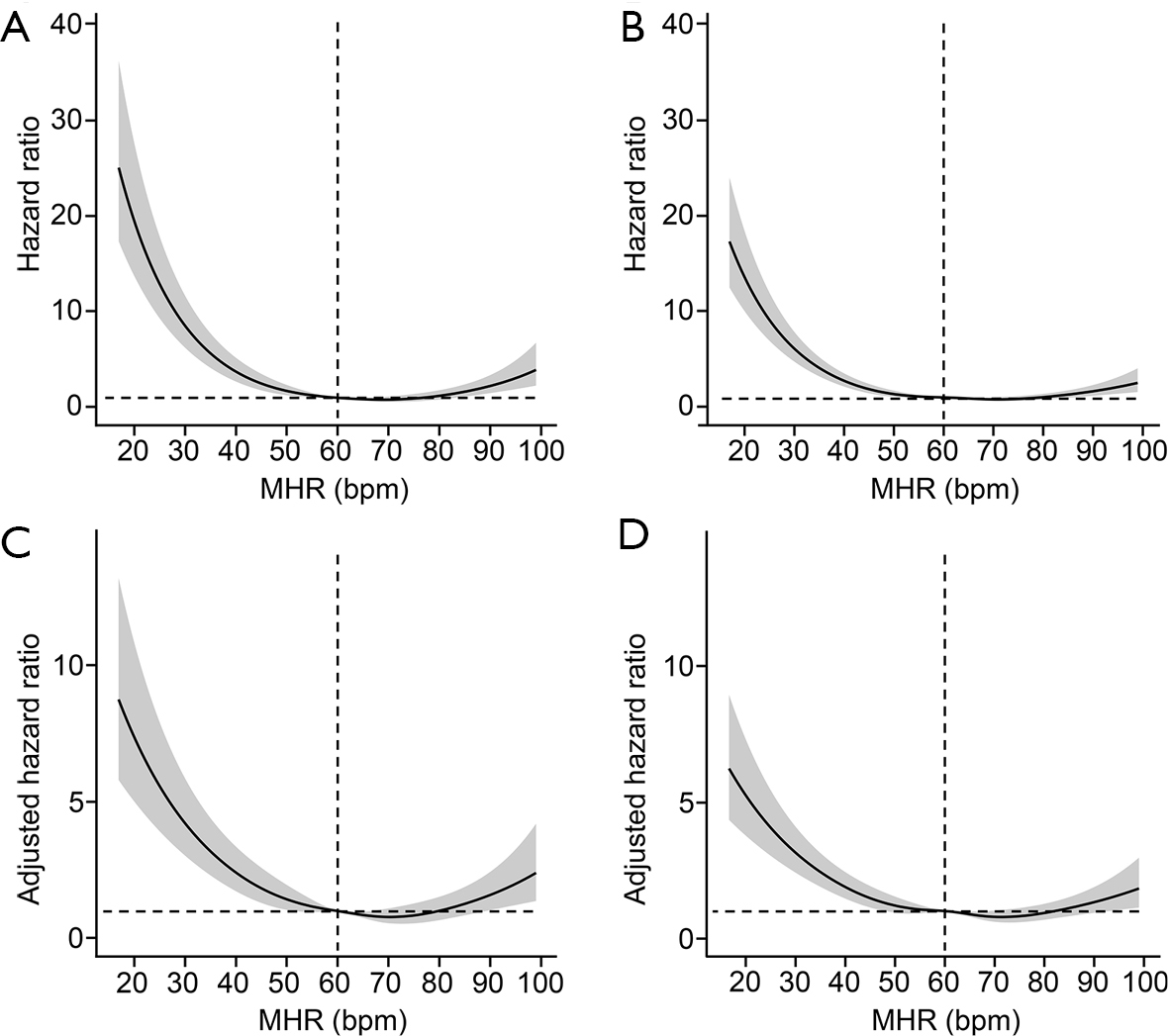 To further clarify the influence of admission HR, drugs, and comorbidities on our results; admission HR over 80 bpm, hypertension, atrial fibrillation, and vasopressor use were included in the sensitivity analyses. The correlation between MHR and outcome was still statistically significant (each P<0.05) in MI patients with low or high admission HR, with or without hypertension, with or without atrial fibrillation, and with or without vasopressor use. After adjustment of the variables, the hazard ratio of 30-day mortality and 1-year mortality was generally increased in patients with low MHR (Figure 2). 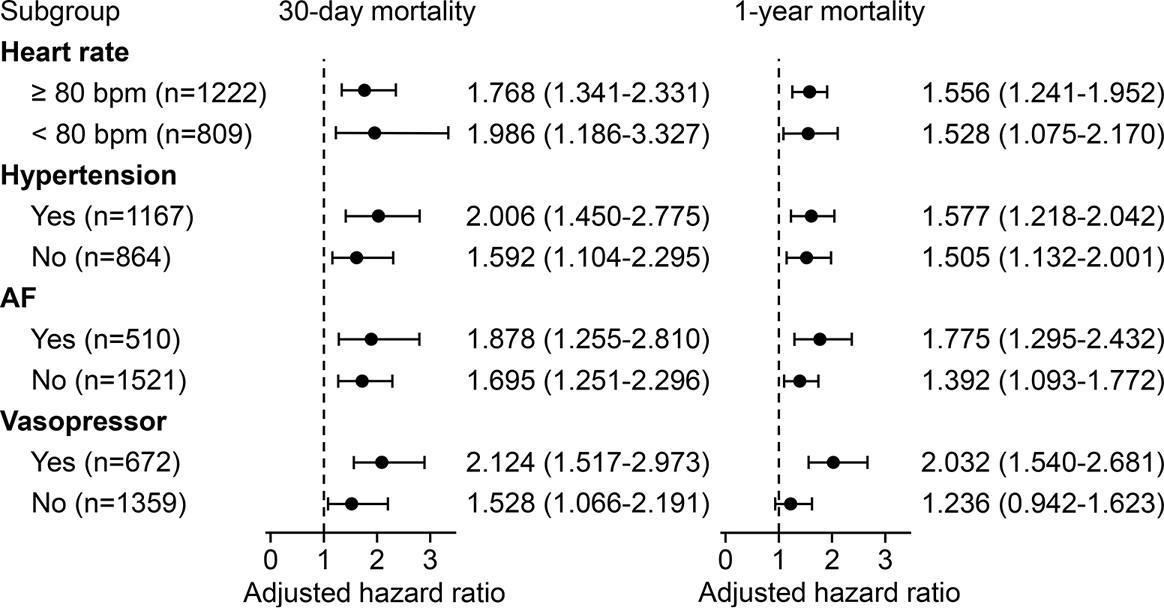 This retrospective cohort study included 2,031 MI patients, which were divided into a high MHR group and a low MHR group with a cut-off point of 60 bpm. Briefly, we found that low MHR was associated with significantly higher risk for 30-day mortality and 1-year mortality compared to high MHR in MI patients. Additionally, HR has been implicated with a risk of mortality in the general population and in patients with cardiovascular disorders in previous studies (15,16). However, limited retrospective evidence was involved in the relationship between MHR and the risk of mortality. The present study showed a L-shaped curve in the restricted cubic splines, indicating a non-linear association between low MHR and 30-day and 1-year mortality. Thus, this study provides evidence for the possibility to predict critically ill MI patients with poor prognosis using low MHR, highlighting the opportunity of employing MHR as a novel, easily obtained risk marker.

Transfer timely to cardiac ICU for careful nursing was recommended for acute MI patients. And comprehensive critical care on admission or after revascularization, including continuous reassessment of hemodynamics such as HR and blood pressure, was needed to improve the prognosis of acute MI patients (17). Recently, severe Coronavirus Disease-19 patients with complex myocardial injury were reported to suffer significantly higher in-hospital mortality compared with those without myocardial injury (18). The Global Registry of Acute Coronary Events (GRACE) score was one of the most used indicators of the prognosis of acute MI (19). While HR was one of the measurements that were enrolled in the GRACE score. Notably, increased resting HR is associated with increased all-cause mortality and the risk of cardiovascular events in healthy individuals (20) or in patients with diabetes (21), atherosclerosis (22), plaque rupture (23), hypertension (24), heart failure (25,26), arrhythmia, or other cardiovascular diseases (27,28). While the negative impact of elevated HR has been confirmed in MI patients, there is still conflicting evidence in relation to the influence of bradycardia. The association between low admission HR (<60 bpm) and mortality was previously observed in patients with ST-segment elevation myocardial infarction (STEMI) undergoing percutaneous coronary intervention (28). However, further data revealed that bradycardia (<60 bpm) was not an independent predictor of mortality in STEMI patients (29,30). Herein, we showed that low MHR (<60 bpm), a physiological parameter that can be easily collected at first-day admission, performs well in predicting the short- and long-term mortality of patients with MI. We expect that MHR will work as a rapid marker to identify high-risk MI patients in ICUs.

Recently, emerging studies have focused on the non-linear relationship between HR and adverse outcomes (29,31,32). The present study showed a typical L-type curve in the restricted cubic splines, depicting an apparent non-linear relationship between MHR and 30-day and 1-year mortality, with the lowest risk around an MHR of 60 bpm. Our findings raise the possibility that MHR could rapidly provide information to physicians, and demonstrate the potential harms of an MHR that is either too high or too low. HR has been recognized as a modifiable risk factor for cardiovascular disease, and HR lowering therapy with beta-blockers (33) and ivabradine (25,34) can improve cardiovascular outcomes in patients with elevated HR, but not in those with low HR. In ICUs, pacemaker optimization had been shown to be a feasible therapeutic option for cardiogenic shock, which could help increasing cardiac output and reducing the detrimental effect of catecholamines (35). Importantly, the present study points out that controlling MHR around 60 bpm may be the optimal HR lowering therapeutic strategy for MI, which would reduce the risk of all-cause mortality in critically ill MI patients.

It was reported that age could be used to estimate the maximum HR in patients with coronary heart disease receiving beta-adrenergic blockade therapy (36). Acute myocardial infarction mortality was reported to increase exponentially with age (37). Thus, age was adjusted in most of our model. Additionally, HR can be affected easily by drugs, therapies, and changes occurring in numerous diseases, such as hypertension, atrial fibrillation, and vasopressor use. In our study, sensitivity analyses in the patients with or without admission HR over 80 bpm, hypertension, atrial fibrillation, and vasopressor use showed that the patients with lower MHR were still remarkably associated with higher mortality (after adjusting a series of covariates). Results implying that MHR acts as an early risk factor in MI patients were consistent in the sensitivity analyses, and highlighted the importance of MHR as a reliable early risk indicator, and that keeping MHR around 60 bpm may be a better HR lowering therapeutic option to minimize the risk of mortality.

Our research has several limitations that should be noted. Firstly, due to the design of retrospective cohort study, selection bias could not be excluded. Sensitivity analysis was carried out to support the consistence of our results. Further external validation would help to enhance the credibility of our results. Secondly, some relevant information about oral medications could not be found in the MIMIC-III database. However, sensitivity analyses for subgroups with hypertension or AF that might receive HR lowering medications therapy showed consistent results. Thirdly, MI patients were identified using ICD-9 codes rather than clinical diagnostic criteria, raising the possibility that a few patients might be missing.

In critically ill MI patients, a low MHR (<60 bpm) can indicate those at increased risk of both 30-day and 1-year mortality, and appropriate HR control strategies must be guaranteed for this high-risk population. These findings identify MHR as an easily obtained prognostic marker of critically ill MI patients during the first 24 h of ICU admission, and further validation of the potential role of MHR in risk stratification is warranted.

Reporting Checklist: The authors have completed the STROBE reporting checklist. Available at http://dx.doi.org/10.21037/atm-21-992

Conflicts of Interest: All authors have completed the ICMJE uniform disclosure form (available at http://dx.doi.org/10.21037/atm-21-992). The authors have no conflicts of interest to declare.

Ethical Statement: The authors are accountable for all aspects of the work in ensuring that questions related to the accuracy or integrity of any part of the work are appropriately investigated and resolved. The application of the MIMIC-III database was approved by the review boards of the Massachusetts Institute of Technology and Beth Israel Deaconess Medical Center. The study was conducted in accordance with the Declaration of Helsinki (as revised in 2013).