Lung cancer has become the most common malignant tumor worldwide, with the highest rates of morbidity and mortality. In 2018, there were approximately 2.1 million new cases and 1.8 million deaths (1). In China, the morbidity and mortality rates of lung cancer rank are higher than all others. More than 80% of lung cancer cases are non-small cell lung cancers (NSCLCs). With the extensive application of low-dose spiral CT (LDCT) in China, and the popularity of physical examination, the rate of detection of solitary pulmonary nodules (SPNs) has increased. SPNs are either benign or malignant, and malignant SPNs are an early manifestation of lung cancer. Clinical evidence has shown that early screening and treatment of malignant SPNs can significantly decrease the mortality of lung cancer (2,3). Therefore, sensitive biomarkers should be identified to develop efficient tools for the diagnosis of SPNs.

As a subtype of tumor cells, circulating tumor cells (CTCs) shed into the vasculature from primary or metastatic solid tumors naturally or as a result of therapeutic procedures, and give rise to tumor development, metastasis, or recurrence (4-6). The detection of CTCs can be simple, rapid, and minimally invasive, thus endowing them with a high value in the diagnosis of malignant tumors, assessment of tumor staging, prediction of prognosis, evaluation of chemotherapy efficacy, and guidance of targeted medication. In the present study, we aimed to explore the correlation between peripheral blood CTCs with benign or malignant SPNs, thereby determining the potential of CTCs as a specific biomarker of lung cancer in early-stage screening of SPNs. We present the following article in accordance with the STARD reporting checklist (available at http://dx.doi.org/10.21037/atm-21-889).

This study was approved by the Ethics Committee of the First Affiliated Hospital of Soochow University. All participants signed the informed consent. The study conformed to the provisions of the Declaration of Helsinki (as revised in 2013) .

The inclusion criteria were as follows: (I) patients with chest CT images showing SPNs and a definite indication of surgery determined by experienced chief or associate chief physicians; (II) patients that had not undergone preoperative treatments, including anti-infection, anti-tuberculosis, chemotherapy, targeted medication, or combination treatment; (III) patients that did not have other types of malignant tumors; (IV) patients that showed normal functions in other vital organs; (V) patients who were willing to cooperate and provide informed consent; and (VI) healthy volunteers.

The exclusion criteria were as follows: (I) patients with clotted, hemolyzed, or contaminated blood samples; (II) the volume of the blood sample was less than 3 mL; (III) patients that had undergone nonstandard procedures in the collection, preservation, and analysis of blood samples; (IV) patients or their families were poorly compliant, did not cooperate with treatment, or refused to sign the informed consent; (V) clinical data were incomplete; (VI) patients diagnosed as small cell lung cancer; and (VII) patients with stage IV tumor.

Data were first subjected to the normality test. Normally distributed data were expressed as mean ± standard derivation; otherwise, they were expressed as medians. Differences of normally distributed data between groups were analyzed by the independent Student’s t-test, and those among groups were analyzed by one-way analysis of variance (ANOVA). In addition, non-normally distributed data between groups were compared using the Mann-Whitney U test, and those among groups were compared by Kruskal-Wallis H test. Enumeration data were expressed as n (%), and were compared using the Chi-square test. Independent risk factors of malignant SPNs were assessed by binary logistic regression analysis. ROC curves were constructed for assessing diagnostic potentials, with sensitivity (%) as the Y-axis and 100-specificity (%) as the X-axis. The area under curve (AUC), sensitivity [sensitivity = true positive rate/(true positive rate + false negative rate) ×100%], and specificity [specificity = true negative rate/(true negative rate + false positive rate) ×100%] were calculated. SPSS 24.0, MedCalc_v12.3 and GraphPadPrism7 were used for statistical analyses. P<0.05 considered statistically significant.

CTC levels were subjected to the normality test. After the Kolmogorov-Smirnov test, Z values in the benign SPNs group, malignant SPNs group, and control group were 0.771 (P=0.593), 0.525 (P=0.946), and 0.833 (P=0.491), respectively, suggesting that CTC levels among the three groups were normally distributed, and were therefore expressed as mean ± standard derivation.

Level of CTCs in peripheral blood 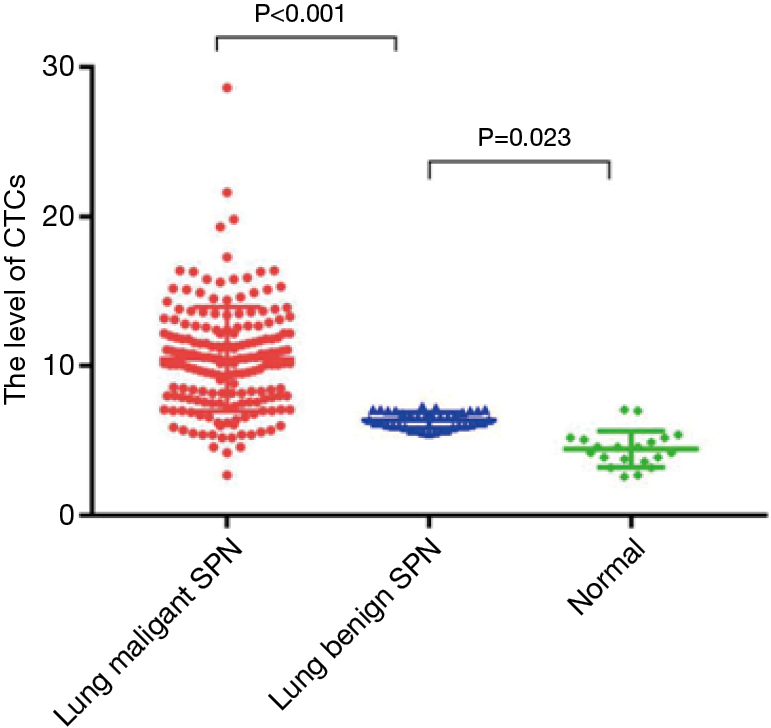 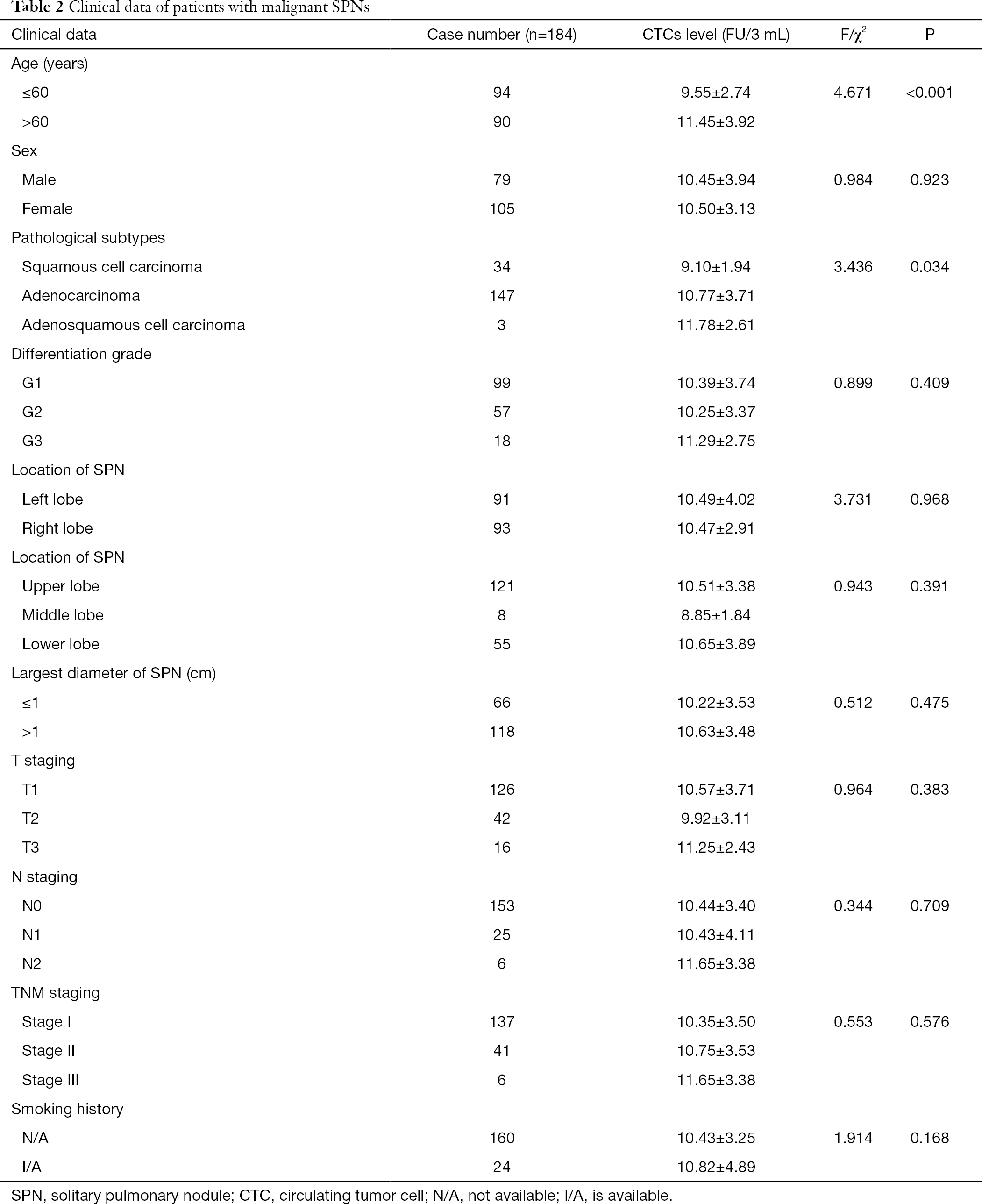 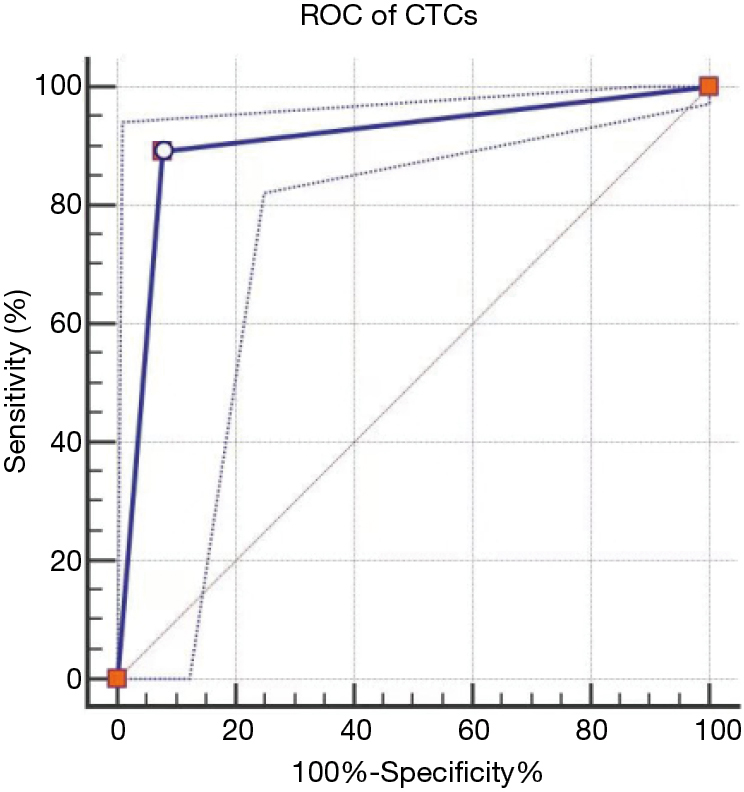 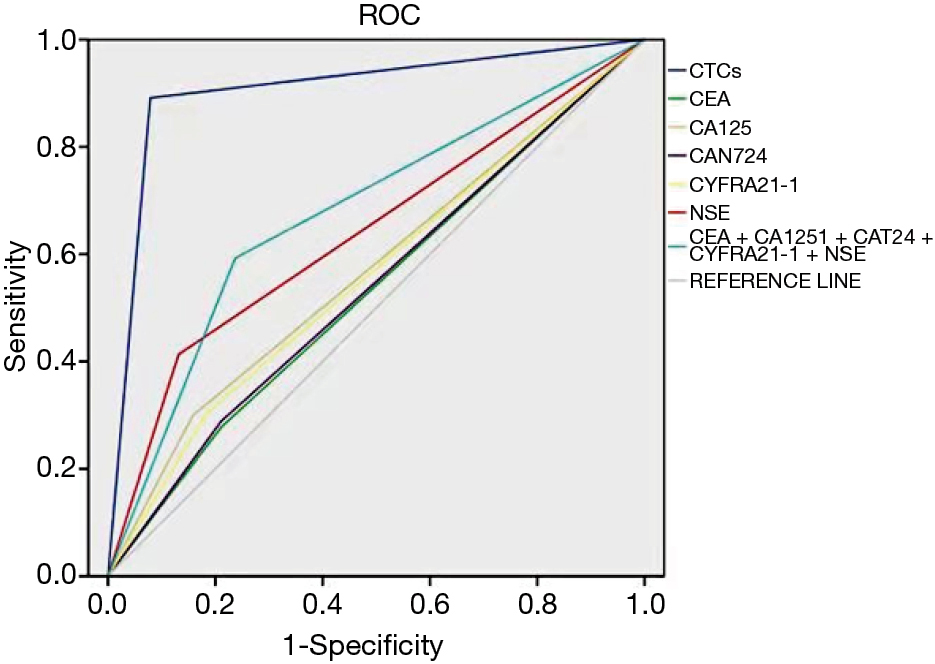 The migration of CTCs into the bloodstream is affected by various factors, including anoikis, shear stress of blood flow, and immune elimination. As a result, CTCs remain at a low level (about 1 cell/mL of peripheral blood), which makes their detection challenging (17).

FR is a glycoprotein with a strong specificity to tissue and tumor, which is mainly distributed on the surface of cell membrane. It is highly expressed on tumor cell surfaces, but is barely or lowly expressed on normal cell surfaces (18,19). In 2013, Yue et al. (20) proposed LT-PCR, which is a novel method for detecting CTCs by specifically recognizing FR on the cell membrane. LT-PCR is being widely applied in clinical practice.

There were several limitations in this study that should be noted. Firstly, this was a single-center study with a small sample size. Secondly, the bias in selecting participants may have influenced the results. A multi-center study with a large sample size is required in the future to validate our findings. Finally, this study is relatively limited. In the future, we will carry out researches on the prognosis evaluation, surgical effect evaluation, chemotherapy efficacy evaluation and targeted drug use guidance of CTCs in lung cancer to prove the clinical application value of CTCs.

Reporting Checklist: The authors have completed the STARD reporting checklist. Available at http://dx.doi.org/10.21037/atm-21-889

Conflicts of Interest: All authors have completed the ICMJE uniform disclosure form (available at http://dx.doi.org/10.21037/atm-21-889). The authors have no conflicts of interest to declare.

Ethical Statement: The authors are accountable for all aspects of the work in ensuring that questions related to the accuracy or integrity of any part of the work are appropriately investigated and resolved. This study was approved by the Ethics Committee of the First Affiliated Hospital of Soochow University. All participants signed the informed consent. The study conformed to the provisions of the Declaration of Helsinki (as revised in 2013).