Squamous cell carcinoma originating from the hypopharynx is relatively rare and accounts for less than 3% of all head and neck carcinoma (1). Pyriform sinus is the predominant affected site of hypopharyngeal carcinoma, representing 70% of all cases (2). Considering the characteristics of being highly aggressive but asymptomatic during the early stage, pyriform sinus squamous cell carcinoma (PSSC) is typically detected in its advanced stages, and is well-known for the poor prognosis (3). With rich lymphatic drainage, cervical lymph node metastases were found to exist in most PSSC patients when first diagnosed. Reported incidence of neck involvement of hypopharyngeal carcinoma ranges from 65% to 80% (4), and is generally accepted as an independent prognostic factor (5). Thus, neck management has long been an important aspect of therapy for cancers in this region. Ipsilateral cervical lymph node dissection should be performed for all patients with PSSC even though no N+ evidence is detected clinically in view of the locally aggressive characteristic. For primary postcricoid carcinoma and posterior pharyngeal wall carcinoma, which are located in the central midline of hypopharynx, risk of bilateral neck lymph node metastasis is relatively high considering the anatomic distribution of lymphatic drainage in this region (6,7), and prophylactic bilateral lymph node dissection (bLND) is thus usually performed for those patients. Yet, for PSSC, most of which are well-lateralized, dissection involving ipsilateral neck region is considered to be sufficient for patients with clinically negative contralateral neck metastasis, and prophylactic bLND is recommended only for those highly suspected to have contralateral metastasis because of obvious midline infiltrating. However, reported occult contralateral lymph node metastasis (cLNM) ranges around 20% to 30% in PSSC patients with ipsilateral lymph node metastasis (iLNM) (7,8), which makes the management of contralateral neck region critical for those patients.

Current estimates of occult cLNM for patients with PSSC mainly depends on judgment based on clinical features, which is qualitative based. Research quantitatively measuring cLNM risk for PSSC patients with positive iLNM is vacant. Our single-center retrospective study aims to quantitatively stratify risk of occult cLNM for PSSC patients, and to guide clinical decisions on postoperative radiation therapy.

We present the following article in accordance with the TRIPOD reporting checklist (available at http://dx.doi.org/10.21037/atm-20-6037).

Information including clinical and pathologic data of 320 patients with PSSC treated with primary tumor resection plus unilateral or bilateral neck dissection at Department of Otorhinolaryngology, Head and Neck Surgery at the Eye, Ear, Nose and Throat Hospital of Fudan University from 2003 to 2017 were retrospectively analyzed. Patients were excluded if they (I) had received any preoperative neo-adjuvant chemotherapy; (II) had distant metastasis when diagnosed; (III) had multiple primary tumors; (IV) had ipsilateral lymph node-negative disease confirmed by postoperative pathology. Consequently, 227 patients with positive lymph node disease were enrolled in our study. Flow diagram of case selection steps was shown in Figure 1. The study was conducted in accordance with the Declaration of Helsinki (as revised in 2013). The study was approved by ethics board of the Eye and ENT Hospital of Fudan University (No. KJ2008-01) and informed consent was taken from all individual participants. 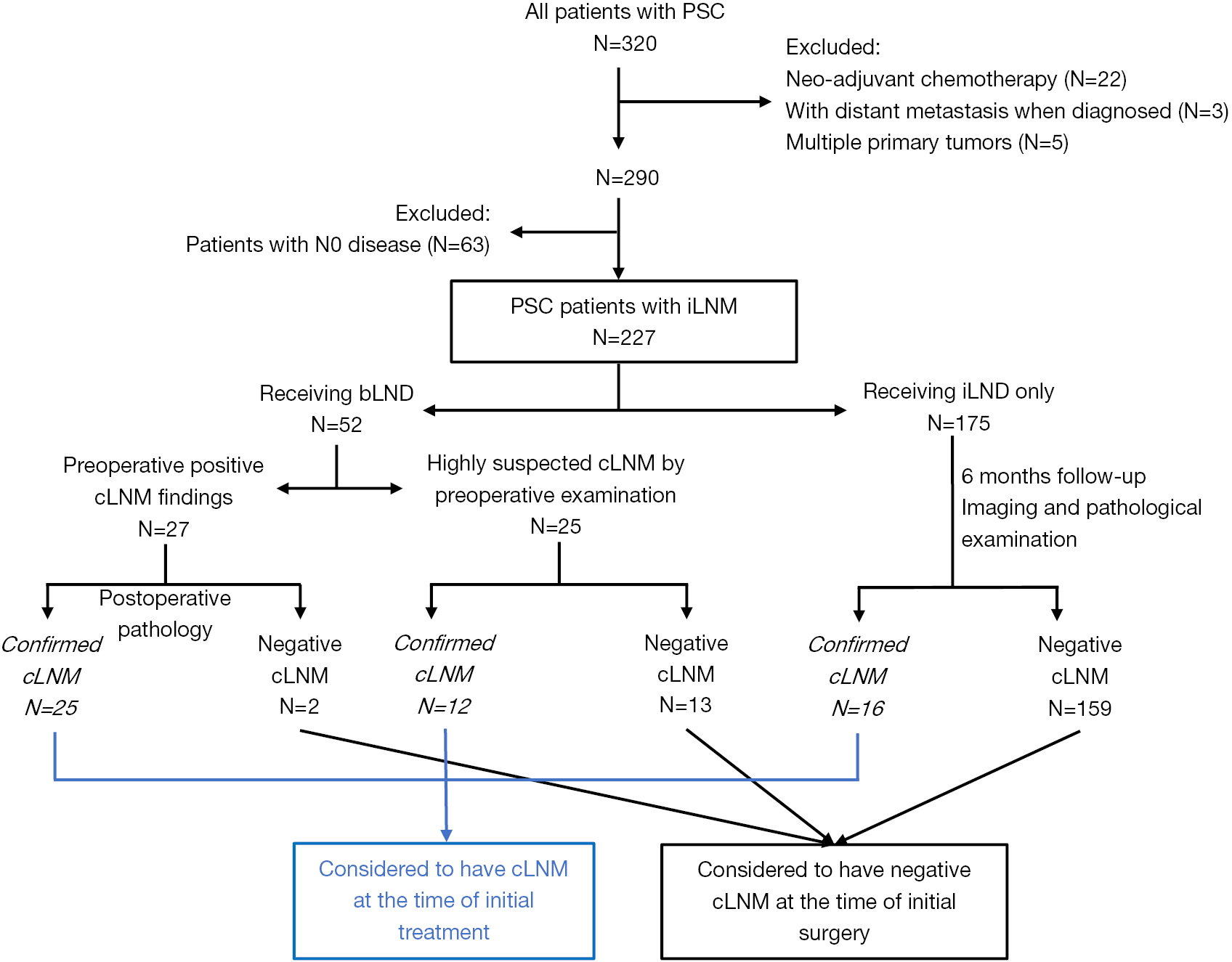 All patients were treated with surgical interventions involving both primary tumor site and cervical lymph node regions initially. The ipsilateral lymph node dissection (iLND) was conducted for all patients in our study. bLND was only performed for those with clinically detected cLNM by pre-operative imaging examination, or those that were highly suspected of contralateral lymph node involvement evaluated as by clinicians such as when the primary tumor infiltrates the midline, despite no evidence of metastasis found before surgery. As a result, bLND was conducted for 52 (22.9%) patients considering preoperative positive cLNM findings or having high probability of occult cLNM evaluated by clinicians through preoperative examination. The others (175 patients) were treated with iLND only. Those who did not receive contralateral lymph node dissection but were found to have contralateral neck recurrence within 6 months after initial surgery were regarded as having occult cLNM at the time of initial treatment and were classified into cLNM group.

Chi-square tests were used to make comparison between categorical variables. Independent risk factors of cLNM were selected using logistic univariate and multivariate regression analyses. Factors with P<0.05 in the univariate analysis were enrolled into multivariate regression analysis for further screening. Those with P<0.05 in the multivariate analysis were considered to be independent risk factors of cLNM and were used to establish our prediction model using R software (version 3.5.1; R Development Core Team). Concordance index (C-index) and receiver operating characteristic (ROC) curve were performed for evaluating the discrimination, and calibration curve was also constructed for assessing the consensus degree of our newly-created model.

The final study cohort consisted of 227 PSSC patients, males made up the majority (221 males and 6 females). The median age was 58 years (ranging between 38 to 82). All patients received primary tumor resection as well as ipsilateral neck dissection. bLND was performed on 52 (22.9%) patients clinically detected to have contralateral neck metastases by preoperative examination (n=27) and highly suspected occult contralateral lymph node involvement as evaluated by clinicians (n=25). Twenty-five of the 27 patients with preoperative positive cLNM findings and 12 of the 25 patients under suspicion were confirmed by postoperative pathology. Sixteen of 175 patients who only received iLND were diagnosed as cLNM by imaging and pathological examination during the postoperative follow-up within 6 months from initial treatment. In total, 53 (23.3%) patients were regarded as having bilateral lymph node metastasis at the time of initial diagnosis and 174 (76.7%) patients were considered as having ipsilateral neck involvement only (shown in Figure 1). The presence of tumor extending across the midline (EAM), extracapsular spread (ES), internal jugular vein adhesion (IJVA), lymphovascular invasion (LVI), and lymph nodal fusion (LNF) tended to occur more often in cLNM-positive group than in cLNM-negative group (P<0.05). Patients in cLNM-positive group also showed larger ipsilateral metastatic lymph node diameter (iMLD) and maximum tumor diameter (MTD) (P<0.05). Details are shown in Table 1. 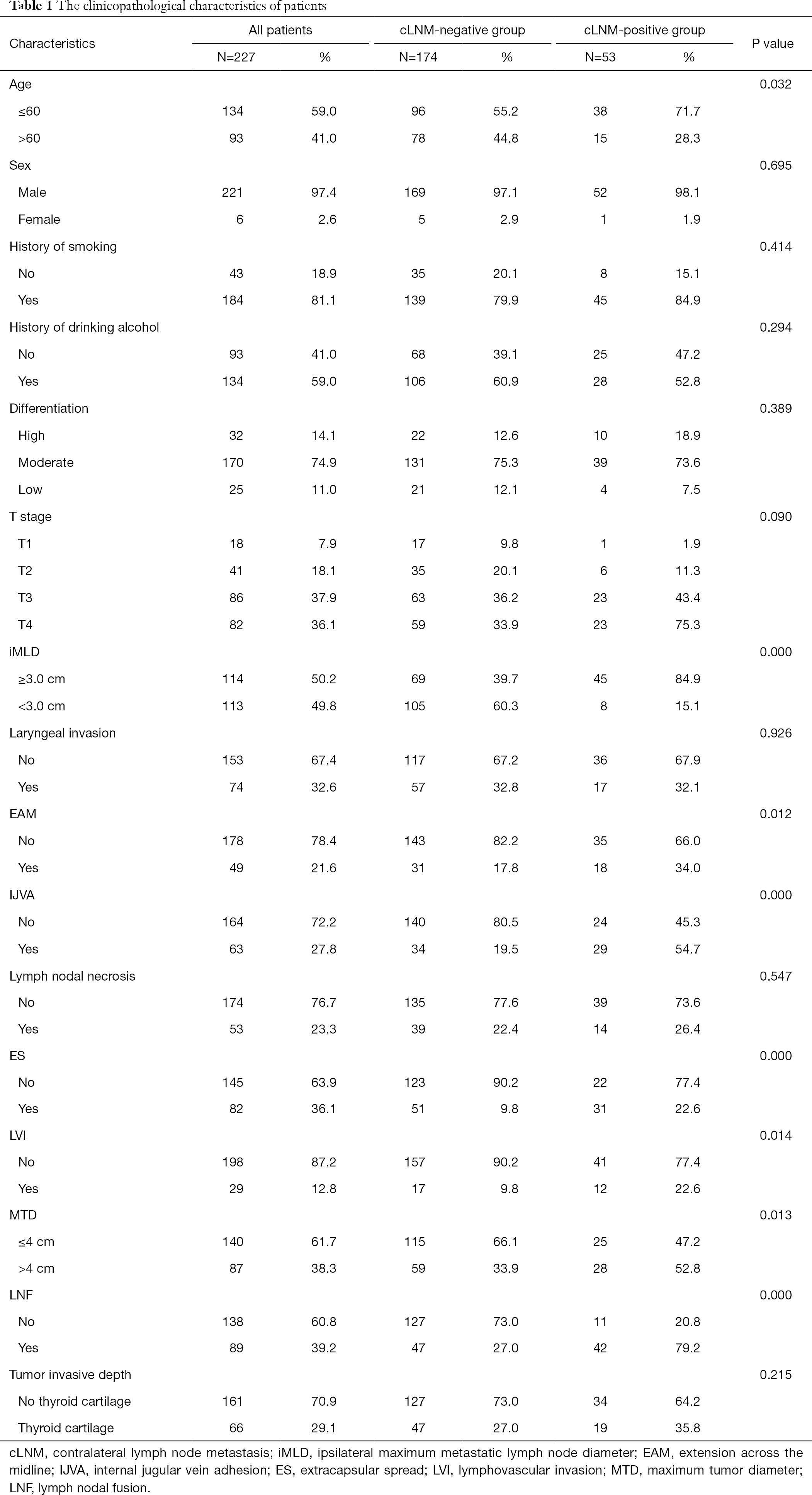 Demographic factors include age, sex, smoking and drinking history, and cliniopathological characteristics includes the presence of tumor EAM, ES, IJVA, LVI, and LNF, lymph nodal necrosis, laryngeal invasion or not, tumor invasion depth, ipsilateral metastatic lymph node diameter and MTD, primary subregions and tumor differentiation. These were analyzed by the logistic univariate analysis. Factors with P <0.05 were enrolled into multivariate regression analysis for further screening. As a result, tumor EAM, IJVA, LVI, MTD and LNF were identified as independent factors associated with the occurrence of cLNM in PSSC patients (shown in Table 2), and were selected to establish our predictive model. 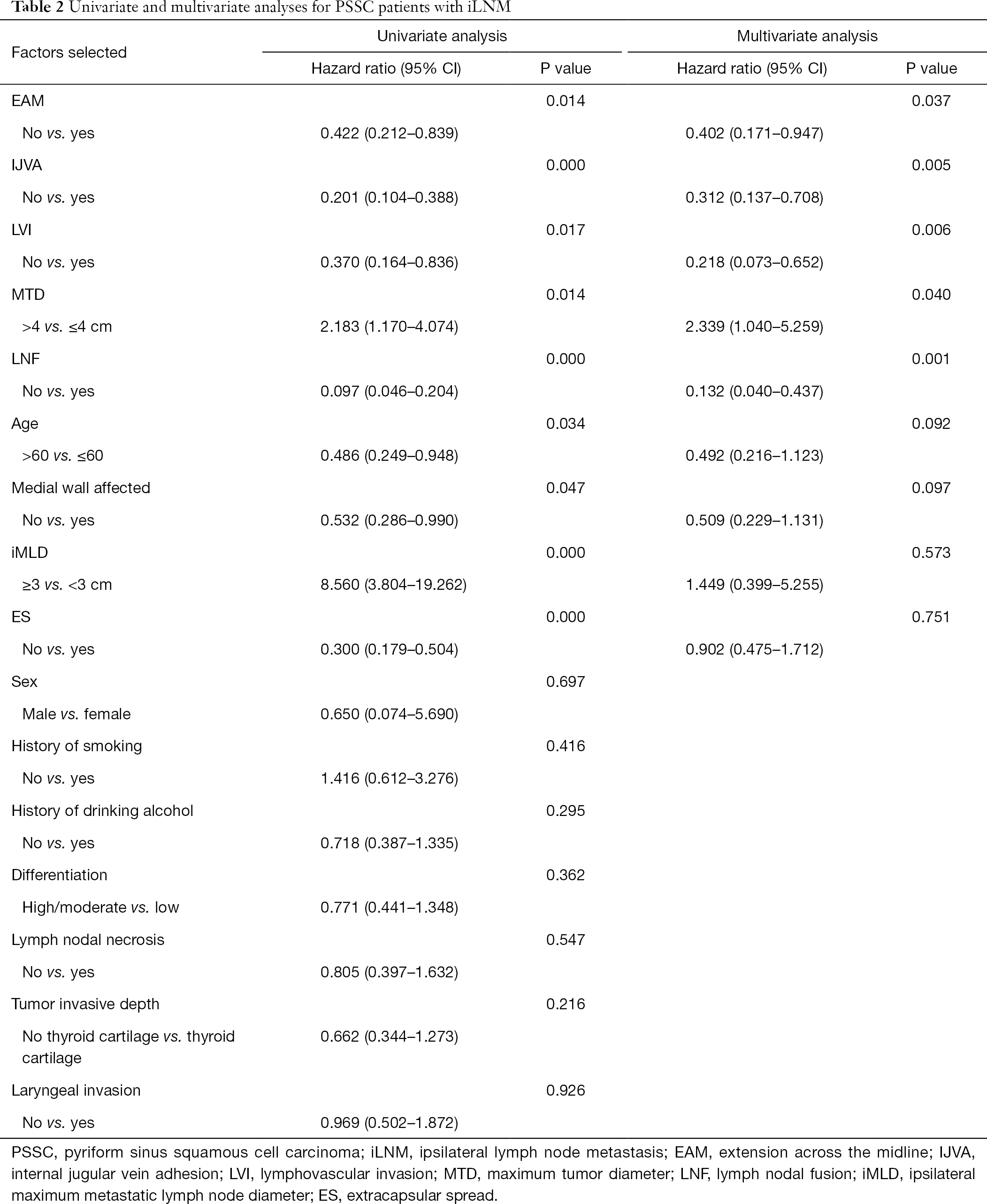 Evaluation and validation of the nomogram

A nomogram incorporating the above-mentioned five factors was constructed to predict the presence of contralateral neck involvement in PSSC patients with iLNM (shown in Figure 2A). C-index and calibration curve were conducted for measuring the accuracy of our newly-created nomogram. As a result, C-index was found to be 0.862 [95% confidence interval (CI): 0.810–0.914]. The ROC curve was shown in Figure 2B. An internal validation was also conducted by 1,000 bootstrap resamples for assessing the precision in terms of C-index. The C-index was 0.860 (95% CI: 0.820–0.900) after 1,000 bootstrapping, which is a great demonstration of favorable accuracy of our newly created model for predicting cLNM in patients with PSSC. Furthermore, the calibration curve also showed a relatively favorable agreement between the estimated and actual probability of cLNM metastases (Figure 2C). 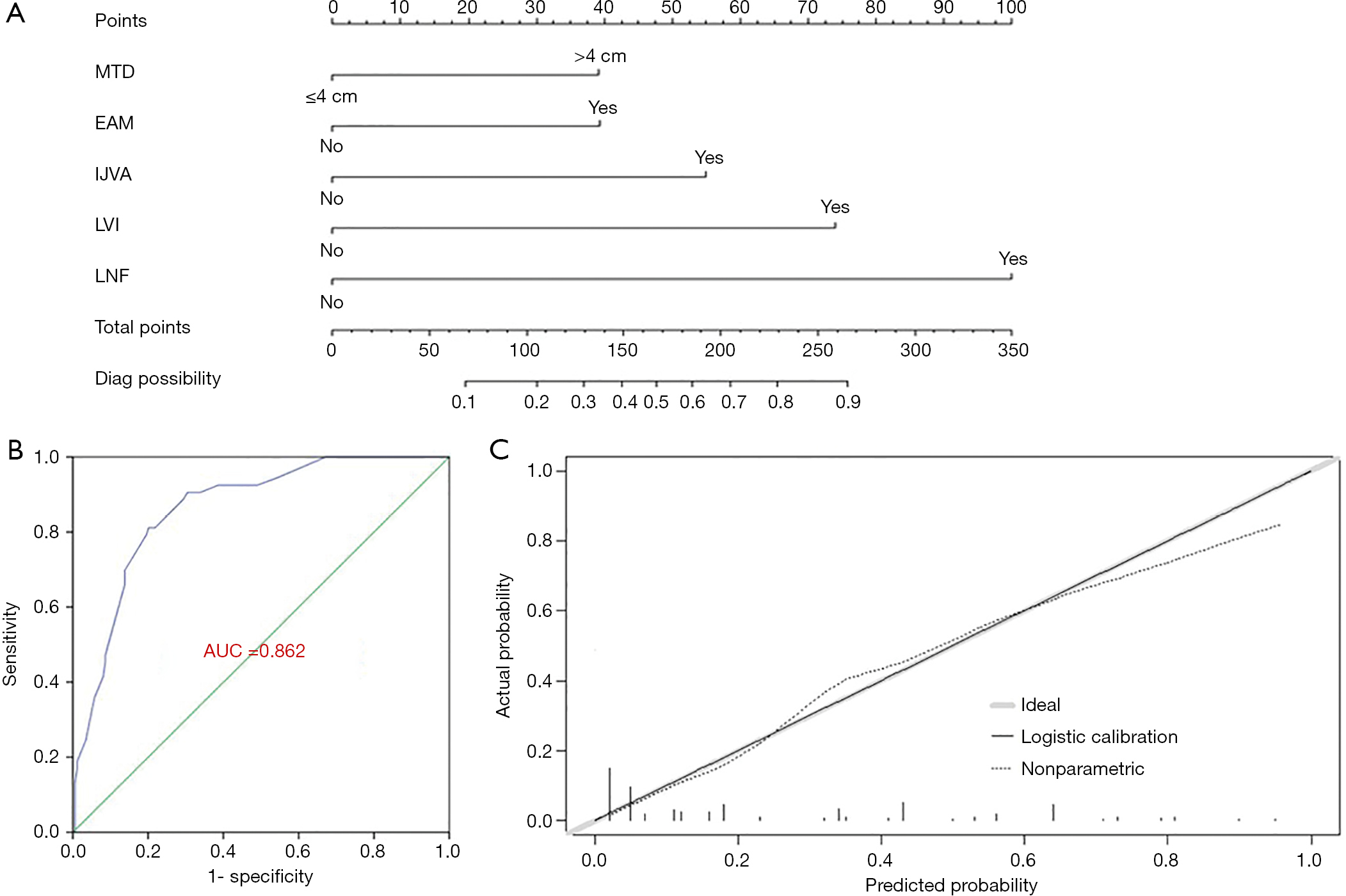 The five variables enrolled in the nomogram had their corresponding risk points, and each patient receives a total score (TS) based on our predictive model for measuring cLNM probability. According to the distribution characteristics of the total cLNM risk score, we selected two cut-off values to stratify patients into three subgroups with varying contralateral neck involvement risks:

Chi-square test was conducted and the result showed a significant difference among above-mentioned three subgroups in terms of contralateral lymph node (3.6%, 21.8%, and 60.7% for low-risk, moderate-risk, and high-risk group, respectively, P=0.000, shown in Table 3 and Figure 3A).

PSSC remains a tricky fit for clinicians due to its highly aggressive clinical behavior as well as high local-regional and distant recurrence rate. In recent years, organ-preservation protocols such as radiotherapy or chemoradiotherapy have been reported to be comparable to surgery treatment in long-term survival and thus became alternative treatment methods for patients with PSSC. Current National Comprehensive Cancer Network’s (NCCN) guidelines also highlight the efforts for organ-preservation in early-stage (9). However, traditional radical surgery including total and partial pharyngo-laryngectomy remains standard treatment for PSSC patients, especially for those with advanced disease. Given the extremely high incidence of local lymph node metastasis, management strategy of cervical lymph nodes is crucial. The main purpose of our study was to screen out high-risk factors for contralateral lymph node involvement in PSSC patients, and to quantitatively predict individualized occult cLNM risk for each patient.

Several previous studies have revealed that patients with primary lesions of characteristics including advanced stages (T3–4), affected medial wall of the pyriform sinus, and tumor across the midline, are more prone to contralateral lymph node involvement (4,10). In our research, two primary lesion-related factors including maximum diameter greater than 4 cm as well as lesions EAM were proved to be independent risk factors for cLNM in PSSC patients and were enrolled for creating the nomogram. However, affected medial wall of pyriform sinus showed a good association with cLNM on univariate analysis with a P value at 0.047 according to our data, but when investigated using multivariate analysis, the P value was 0.097. This result suggests affected medial wall may not have comparable effectiveness to the other factors enrolled, especially when compared to tumor EAM.

Previous studies only reported that cLNM was more frequent in patients with bulky N stages in general (4). In our research, factors in regard to ipsilateral lymphatic pathological changes were first analyzed for screening out independent risk factors of cLNM. As a result, two factors including LVI and LNF, which indicate more severe ipsilateral lymph node invasion, were proved to be significantly associated with cLNM in PSSC patients. Related report revealed that LVI had predictive value for lymph node metastasis, and was associated with poor prognosis (11), while LNF was found to be associated with contralateral lymph node invasion for the first time in our research.

We created a nomogram based on the above-mentioned five independent risk factors for PSSC patients with positive ipsilateral lymph nodes to quantitively predict the occult cLNM. The C-index and calibration curve of our newly-created nomogram was satisfactory with a C-index of 0.862 (95% CI: 0.810–0.914) in the training cohort and 0.860 (95% CI: 0.820–0.900) in the validation cohort.

A postoperative treatment strategy selection flow chart aiming at occult cLNM risk for PSSC patients with ipsilateral N+ disease was created based on our newly-established predictive model, which may aid in clinical decision-making for those patients.

There are two main limitations of our research. First, considering the retrospective nature, selection bias is inevitably produced. Second, only patients from a single institution were enrolled, which contributes to the lack of external validation. More reliable multicentric and prospective studies are expected to validate our model in the future.

Reporting Checklist: The authors have completed the TRIPOD reporting checklist. Available at http://dx.doi.org/10.21037/atm-20-6037

Conflicts of Interest: All authors have completed the ICMJE uniform disclosure form (available at http://dx.doi.org/10.21037/atm-20-6037). The authors have no conflicts of interest to declare.

Ethical Statement: The authors are accountable for all aspects of the work in ensuring that questions related to the accuracy or integrity of any part of the work are appropriately investigated and resolved. The study was conducted in accordance with the Declaration of Helsinki (as revised in 2013). The study was approved by ethics board of the Eye and ENT Hospital of Fudan University (No. KJ2008-01) and informed consent was taken from all individual participants.