Ovarian cancer is the third malignancy of the female genital tract, following cervical and uterine cancer. In 2020, there were 21,750 estimated new diagnoses of ovarian cancer and 13,940 deaths from the disease in the United States; deaths were higher than from cancer of the uterine corpus and cervix (1). High grade serous ovarian cancer (HGSOC) is the most common histological subtype of ovarian cancer, which is characterized by a high risk of recurrence and frequent genetic and epigenetic alterations of homologous recombination (HR) pathway genes, accounting for 70-80% of deaths from ovarian cancers (2-4). HR deficiency can be assessed by the presence of germline and somatic mutations in HR genes, including the breast cancer susceptibility genes 1 and 2 (BRCA1 and BRCA2), Fanconi anemia genes (BRIP1, PALB2), the core RAD genes (RAD51C, RAD51D), and genes involved in HR pathways either directly (CHEK2, BARD1, NBN, ATM) or indirectly (CDK12) (5). The lifetime risk of epithelial ovarian cancer of well-established moderate- and high-penetrance susceptibility genes varies approximately between 5% and 60%, among which BRCA1/2 genes had the highest risk coefficient (5). Mutations in BRCA1/2 genes may lead to chromosomal instability, promote cell proliferation and prevent differentiation of normal cells, thus resulting in the occurrence and development of tumor (6). It is also an important biomarker for therapeutic intervention, as ovarian cancer patients with germline or somatic BRCA1/2 mutation benefit more from chemotherapy and poly (ADP-Ribose) polymerase (PARP) inhibitors than non-carriers (7-10). Therefore, fully understanding BRCA1/2 mutations is of great significance for clinical genetic counseling and guiding medical management strategies of ovarian cancer.

Common mutation types include single-nucleotide variants (SNV), insertion/deletion (indel) and large genomic rearrangement (LRG) and can occur in both germ cells and somatic cells. To our knowledge, due to the insufficient precision of bioinformatics algorithm on copy number variation in next-generation sequencing (NGS) method, previous studies on the prevalence of BRCA1/2 mutation in ovarian cancer mainly evaluated germline SNV and indel, but usually lacked LGR detection (11-17). Besides that, studies on tumor BRCA1/2 mutation are still limited for the relatively lower prevalence and more complex detection workflow (4,18,19). Although some studies investigated BRCA1/2 mutations in ovarian cancer patients in our country, none of them has simultaneously clarified the overview of germline and tumor BRCA1/2 mutation including SNV, indel and LGR, also none specifically in HGSOC patients. In this study, we took advantage of NGS and multiplex ligation-dependent probe amplification (MLPA) technologies to investigate deleterious germline and somatic BRCA1/2 mutations in Chinese HGSOC patients, and analyze their association with clinicopathological factors and survival outcomes. We present the following article in accordance with the MDAR reporting checklist (available at http://dx.doi.org/10.21037/atm-20-6827).

An unselected cohort of 115 Chinese HGSOC patients undergone surgery in Fudan University Shanghai Cancer Center from 2014 to 2015 were sequentially selected for our study population. Patients enrolled were supposed to meet the following inclusion criteria: (I) pathologically confirmed HGSOC at the Department of Pathology of Fudan University Shanghai Cancer Center; (II) sufficient formalin-fixed paraffin-embedded (FFPE) sections for somatic testing; (III) DNA extracted was qualified for NGS and MLPA testing; and (IV) willingness to provide signed consent in advance of the trial. Patients not meeting all of these inclusion criteria were excluded. Blood and paired FFPE tissue samples were collected and retrieved from our biobank and the Department of Pathology for BRCA1/2 testing. Genomic DNA extracted from tumor tissue sections and peripheral blood were performed using QIAamp DNA MiniKit and QIAamp DNA MidiKit (QIAgen, Valencia, CA), respectively. Clinicopathological parameters were electronically retrieved from the Hospital Information System (HIS) of Fudan University Shanghai Cancer Center. Median age at diagnosis in this cohort was 51 years (range, 38–79 years). All patients were followed up until July, 2020, or death. The median follow-up time was 44.8 (0.2–73.2) months. Disease relapse or progression was determined by medical imaging, serology, or histology. Progression-free survival (PFS) was measured from diagnosis to local or systemic recurrence or the last follow-up, while OS was measured from diagnosis to death or the last follow-up. Patients with one or more family members within two generations with breast or ovarian cancer were considered as having an HBOC family history. No kinship was found among them according to information of genetic counseling. The study was conducted in accordance with the Declaration of Helsinki (as revised in 2013). The study was approved by Medical Ethics Committee of Fudan University Shanghai Cancer Center (NO.: FWA00030121) and informed consent was taken from all individual participants. 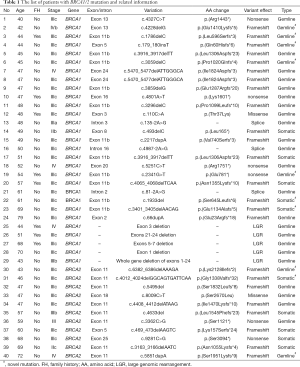 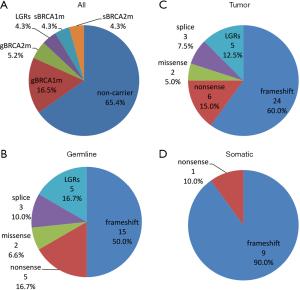 All BRCA1/2 mutations including SNV, indel and LGRs were visualized by IGV software or Coffalyser software. Notably, no patient in this cohort was found with two or more deleterious mutations showing a mutual exclusion of BRCA1/2 mutation. In terms of distribution, all mutations are scattered in various functional domains and protein binding regions of BRCA1/2 (Figure 2).

The association between BRCA mutations and clinicopathological factors

Age at diagnosis, FIGO stage, family history of HBOC and family history of other cancer than breast and ovarian cancer, including esophageal cancer, gastric cancer, liver cancer, lung cancer, pancreatic cancer, intestinal cancer and malignant teratoma, were included in pathologic characteristics. The median age in this cohort was 51 years (range, 38–79 years). 10.4% of these patients had potentially significant family history of HBOC. The proportion of germline (66.7%) and tumor (75%) mutation carriers was significantly increased for patients with family history when compared with those without (P<0.05), while somatic BRCA1/2 mutation carriers showed no significant association with inheritance patterns (8.3%, P=0.4, Table 2). In addition, patients with deleterious germline BRCA1/2 mutation appeared to be younger than non-carriers (mean age, 50.9 years vs. 54.4 years, P=0.004), while somatic or tumor BRCA1/2 mutation carriers showed no significant association with ages (mean age, 58.7 vs. 54.4 years for somatic, P=0.314, 52.9 years vs. 54.4 years for tumor, P=0.076, Table 2). Notably, the onset age of patients with germline mutations was significantly younger than that of patients with somatic mutations (mean age, 50.9 vs. 58.7 years, P=0.009). No significant association was found between BRCA1/2 status and clinicopathological factors including stage and family history of other cancers. The relationships between BRCA1 and BRCA2 mutation and clinicopathological factors are listed in Table 3. No statistical significance was found in both ages (mean age, 50.5 vs. 52.5 years, respectively, P=1, Table 3) and family history of HBOC (P=0.155) between the two groups. 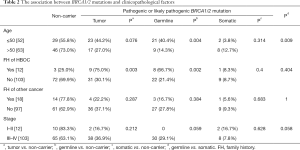 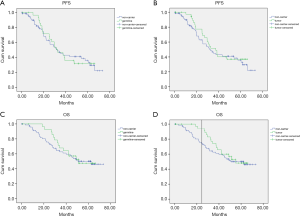 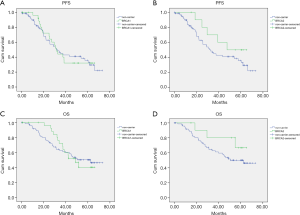 This study specifically focused on Chinese HGSOC patients, and firstly simultaneously clarified the overview of germline and somatic BRCA1/2 mutations including SNV, indel and LGR, and further investigated the relationship between BRCA1/2 mutation with clinical pathologic characters and survival outcomes.

Beyond germline mutations, somatic mutations in HR pathway have been implicated in sporadic ovarian cancer, accounting for approximately 6% of HGSOC (22). Our results showed that the somatic BRCA1 and BRCA2 gene mutation frequencies in Chinese HGSOC patients were 4.3% and 4.3% respectively, which was slightly higher than the previously reported frequencies of 3% and 3% respectively in Western population (4). Currently in China, early screening and routine examination of BRCA1/2 mutation for ovarian cancer patients is still incomplete, a higher percentage of patients diagnosed with distant metastasis, which may lead to the deviation of somatic mutation frequency. In this study, tumor samples showed high proportion of III and IV FIGO stage as shown before, these might be the reasons of higher somatic BRCA1/2 mutation frequencies we observed.

From the clinical point of view, the PARP inhibitors efficacy includes both germline mutant and sporadic ovarian cancers with HR deficiency (23). Moreover, an additional important issue of current research is to expand their use in ovarian cancers with HR deficiency or even beyond HR-deficient. Recently, novel combinations of PARP inhibitors with drugs that inhibit HR, such as anti-angiogenics, immune checkpoint, PI3K/AKT/mTOR, WEE1, MEK, and CDK4/6 inhibitors that have also been proposed in patients with de novo or acquired HR proficiency to PARP inhibitors (24). However, further clinical practices are required to reduce overlapping toxicities by optimizing dose and schedule, and to utilize the combinations to highly selected patients who would not otherwise benefit from single PARP inhibitors (24). Meanwhile, a comprehensive mutation detection capability would accelerate the identification of cancers appropriate for combined therapy.

In summary, there is a high germline (26.0%) and tumor (34.8%) BRCA1/2 mutation incidences including SNV, indel and LGR in Chinese HGSOC patients. Germline mutations were associated with HBOC family history and age at diagnosis of HGSOC, whereas somatic mutations were not. In our study, tumor BRCA1/2 mutations predicted increased sensitivity to platinum-based chemotherapy and significantly improved survival outcomes, but the advantage was time-depended. A larger cohort and even multigene panel testing should be examined to clarify the relation between BRCA1/2 mutation and prognosis.

Conflicts of Interest: All authors have completed the ICMJE uniform disclosure form (available at http://dx.doi.org/10.21037/atm-20-6827). The authors have no conflicts of interest to declare.

Ethical Statement: The authors are accountable for all aspects of the work in ensuring that questions related to the accuracy or integrity of any part of the work are appropriately investigated and resolved. The study was conducted in accordance with the Declaration of Helsinki (as revised in 2013). The study was approved by Medical Ethics Committee of Fudan University Shanghai Cancer Center (NO.: FWA00030121) and informed consent was taken from all individual participants.