Epithelial ovarian cancer is one of the most commonly diagnosed and lethal diseases among women, and 295,414 new cases and 184,799 deaths were documented in 2018 around the world (1). In China, 52,100 new cases and 22,500 deaths were reported in 2015 (2). Half of the patients will relapse within 16 months even after standard treatment including surgery and platinum-based chemotherapy. Furthermore, the 5-year overall survival (OS) rate is only approximately 50% (3,4).

BRCA1/2-associated ovarian cancers have been reported to have improved platinum sensitivity and OS (5,6). Several PARP inhibitors, such as Olaparib, Rucaparib, and Niraparib, have been approved by the Food and Drug Administration (FDA) as maintenance therapy for platinum-sensitive recurrence or as targeted therapy for BRCA-mutated patients. Somatic BRCA1/2 mutations are also included as the indication. Additionally, some reports show that patients with other homologous recombination repair (HRR) pathway gene mutations may also impact patients’ platinum sensitivity and prognosis, whereas other reports show inconsistent conclusions (7-9). Also, patients harbor some HRR genes may also respond to PARP inhibitor targeted therapy. However, data on the genetic burden of Chinese ovarian patients are limited. Thus, it is important to investigate the frequency of HRR gene mutations and their clinical-prognostic impact in Chinese ovarian cancer patients.

Since the vast majority of ovarian cancers are high-grade serous ovarian cancers (HGSC), we applied next-generation sequencing (NGS) in a consecutive Chinese HGSC patient cohort. Both germline and somatic deleterious mutations, covering BRCA1/2 and other 22 core HRR genes, were identified, and their relationships with clinical parameters and prognosis were analyzed. We present the following article in accordance with the MDAR checklist (available at http://dx.doi.org/10.21037/atm-20-5136).

This study was approved by the Committee at Fudan University Shanghai Cancer Center (IRB No. 1704171-6) and conducted in accordance with the Declaration of Helsinki (as revised in 2013). All individual participants signed the informed consent.

We enrolled 42 consecutive patients who underwent primary surgery for HGSC in November 2015 and December 2015 at our institution. Pathological data were primarily obtained from pathology reports. Then, all pathological slides were reviewed by two experienced gynecologic pathologists. HGSC were confirmed according to the WHO criteria.

Clinical data including age, FIGO stage, preoperative laboratory data, surgical outcomes, treatment strategy and patients’ disease status were obtained from medical records and cancer registries. Surgical outcomes were categorized as R0, R1 and R2 regarding the residual disease. Patients were clarified as platinum sensitive and platinum resistant, according to the response to platinum-based chemotherapy (10). Progression-free survival (PFS) was defined as the time interval from the date of primary surgery to the date of disease progression or recurrence, or the date of last follow-up with no relapsed disease. OS referred to the time interval from the date of the primary surgery to the date of death or the last follow-up (February, 2020).

The sequence data were mapped to the human genome (hg19) using BWA aligner 0.7.10. Local alignment optimization, variant calling and annotation were performed using GATK 3.2, MuTect, and VarScan. Variants were filtered using the VarScan fpfilter pipeline, with loci with a depth less than 100 filtered out. At least 5 supporting reads were needed for INDELs; alternatively, 8 supporting reads were needed for SNVs. According to the ExAC, 1,000 Genomes, dbSNP, and ESP6500SI-V2 databases, variants with population frequency over 0.1% were grouped as SNP and excluded from further analysis. The remaining variants were annotated with ANNOVAR and SnpEff v3.6. A DNA translocation analysis was performed using both Tophat2 and Factera 1.4.3.

We used SPSS software (version 21.0) and GraphPad Prism (version 6.0) for the statistical analyses. Demographic data were described as the medians with ranges or the frequencies with percentages. Chi-squared or Fisher’s exact tests were used for comparison of the categorical data. The PFS and OS were analyzed with the Kaplan-Meier method with log-rank tests for univariate analyses, and cox regression analyses with hazard ratios (HRs) for the multivariate analyses. All P values reported were 2-sided, and P<0.05 was considered statistically significant, and.

The patient characteristics are summarized in Table 1. The median (range) age of the patients was 58 [35–77]. The majority of the patients (41/42, 97.6%) had advanced stage (III–IV) HGSC. The HRR gene mutation profile is shown in Figure 1. Deleterious germline HRR-mutations were identified in 16.7% (7/42) of the HGSC patients. Among them, one patient had both germline BRCA2 and ATM mutations. Six patients had only somatic mutations, increasing the HRR mutation rates to 31.0% (13/42). Details of the gene mutations are listed in Table 2. 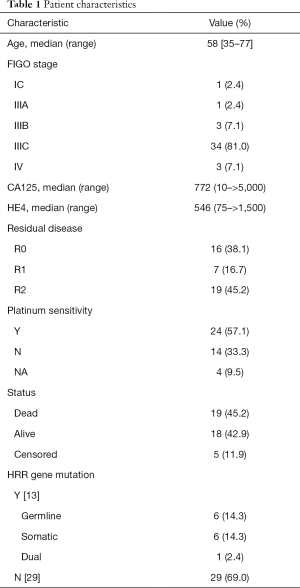 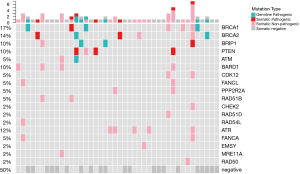 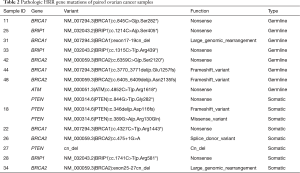 Figure 2 Correlation of pathological homologous recombination repair (HRR) gene mutations with residual disease and platinum sensitivity. Data among the three groups were compared with Pearson chi-square tests with P values. (A) Residual disease status among three groups. The R0 rates in the wild-type, germline and somatic homologous recombination repair (HRR) mutated groups were 48.3%, 28.6% and 0%, respectively (P=0.233). (B) Response to platinum treatment in each group. There were no statistically differences among three groups (wild-type vs. germline vs. somatic, 62.1 vs. 42.9 vs. 50%, respectively, P=0.851).

Our study showed that a considerable proportion of Chinese HGSC patients harbored HRR gene mutations. However, the HRR gene defect was not associated with improved survival in our cohort.

Previous reports have indicated that HRR gene mutations may impact platinum sensitivity and prognosis, but the conclusions were inconsistent (5-9). Pennington et al. (8) demonstrated that, except for germline BRCA1/2 mutations, somatic BRCA1/2 mutations and mutations of other homologous recombination genes have a similar positive impact on patients’ OS. Zhao et al. (9) showed that BRCA1/2-mutation carriers had favorable platinum sensitivity while mutations in other HR genes predicted a poor prognosis. In our study cohort, neither BRCA mutations nor HRR gene mutations were related to platinum sensitivity or prognosis. Shi’s study showed that BRCA mutation carriers had improved survival only in the subgroup with gross residual disease (19). In our study, patients with HRR mutations had a lower rate of complete or optimal cytoreduction, and this may also affect patients’ prognosis. Labidi-Galy (20) demonstrated that the location of mutation in the BRCA2 gene could affect the treatment efficacy and survival of patients, and only those with mutations located at RAD51-BD (exon 11) had prolonged PFS, platinum-free interval and OS. Thus, when assessing a patient’s individualized treatment, we should further explore the location and function of HRR mutations.

The main limitation of our study is the small sample size, and a slight change could influence the outcome observed. However, consecutive patients in two months were chosen to avoid selection bias. Notwithstanding this limitation, this study involved a group of homogeneous patients with the same histology and similar treatment strategies. Moreover, understanding HRR gene defects other than BRCA1/2 mutations could better elucidate the HGSC tumor gene profile.

Our results suggest that HRR gene defects are not associated with improved survival outcomes in our Chinese high-grade serous ovarian cancer patient cohort.

We would like to thank all doctors, nurses, patients, and their family members for their kindness to support our study.

Conflicts of Interest: All authors have completed the ICMJE uniform disclosure form (available at http://dx.doi.org/10.21037/atm-20-5136). The authors have no conflicts of interest to declare.

Ethical Statement: The authors are accountable for all aspects of the work in ensuring that questions related to the accuracy or integrity of any part of the work are appropriately investigated and resolved. This study was approved by the Committee at Fudan University Shanghai Cancer Center (IRB No. 1704171-6) and conducted in accordance with the Declaration of Helsinki (as revised in 2013). All individual participants signed the informed consent.