The real difficulty in improving concordance of clinical practice with guidelines

The degree to which patient care is concordant with guidelines is widely used to assess the quality of health care. Compliance with guidelines is very high for certain cancers and procedures but not for others. For example, patients with stage I-III colon cancer routinely undergo bowel resection, with very little variation in rates between regions or institutions (1). However, assuming that noncompliance to follow guidelines reflects a failure of the care providers is not so straightforward when there are many possible treatment alternatives that have very different characteristics, especially when there is controversy about whether they are equivalent. About 15% to 30% of patients with early-stage breast cancer who undergo breast-conservation surgery (BCS) do not receive whole-breast irradiation (WBI), which has been the “standard” treatment for decades. Possible alternative radiations include accelerated partial breast irradiation (APBI) using brachytherapy or external-beam irradiation and intraoperative radiotherapy (IORT) (2-5), in which a single dose is given at the time of surgery. These two approaches substantially shorten the duration and inconvenience of radiation therapy. Traditional WBI requires patients to commit to a 5-7-week course of treatment, while APBI involves once or twice-daily treatments generally given over 1-2 weeks and IORT requires no commitment beyond that the patient already has made to receiving surgery.

These alternatives to WBI have become increasingly popular over time. We identified 53,766 female breast cancer patients in the SEER-Medicare linked database age 65 years or older diagnosed with a first breast cancer that was American Joint Committee on Cancer (AJCC) stage 0, I, or II during 2002 and 2007. We limited the analysis to those most likely to have complete claims and excluded patients over age 70 with estrogen or progesterone-receptor positive node-negative cancers 2 cm or smaller. We found that the use of APBI (either brachytherapy or external-beam radiation) increased dramatically in the study period, from 2% to 13% (Figure 1). Conversely, traditional WBI treatment decreased substantially, from 83% to 70%. Of note, the rate of BCS without any form of radiation increased slightly, showing that the advent of this more convenient technology did not result in an overall increase in the use of any radiation modality following BCS in this population but was rather substituting for WBI. 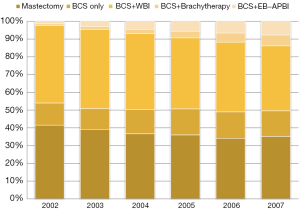 There were certainly no data during this time from randomized trials showing APBI had equal long-term effectiveness or toxicity to WBI and only limited single-institution studies of this approach (6). There are also now long-term data from at least one randomized trial showing APBI may be equally as effective and safe as WBI (7). Insurance obstacles to the use of APBI have been removed since the era of our study, and the increasing use of external-beam APBI makes it much more widely available than it was then. However, our study predicts that APBI will not reduce the proportion of the Medicare population that does not receive radiation at all.

Whether increasing the proportion of patients receiving radiation therapy is a good or bad thing is not so straightforward. It is inevitable that quality guidelines will lag behind changing community standards and the evidence base. Changing guidelines frequently is not easy organizationally, however. Another problem is how guidelines deal with subgroups. It is clear that not all patients benefit equally from radiation therapy, particularly those with ductal carcinoma in situ or elderly patients with selected invasive cancers. For example, a randomized trial comparing tamoxifen alone to WBI plus tamoxifen following lumpectomy for women age 70 or older with estrogen receptor-positive tumors 2 cm or smaller with negative axillary nodes showed the 10-year breast relapse rates in the two arms to be 10% and 2%, respectively, with no differences in the ultimate rate of metastases, breast cancer-specific mortality, or overall mortality (8). Guidelines that are overly broad can therefore result in unnecessary or inappropriate treatment.

But finally, and most difficult of all, how should guidelines accommodate patients’ values and wishes? Patients choose treatments after comparing the costs and benefits of each alternative in consultation with their physicians. Suppose a patient is willing to accept a smaller long-term chance of cure in return for less immediate toxicity? In a classic article, McNeil and colleagues interviewed 14 patients with operable lung cancer, whom they asked to choose between two treatments: surgery, which had some risk of postoperative mortality but a higher 5-year survival rate; and radiotherapy, which had no immediate mortality but a lower 5-year survival rate. Many patients were averse to taking a risk of immediate death in order to have a greater chance of survival in the more distant future (9). From the perspective of a rational patient, treatment is acceptable only if there is a positive net benefit—but different patients make that calculation in different ways. What if the values of the members of the committee that created the guideline are not those of the patient? Then following the guidelines does a disservice to that person and is morally untenable for the physician.

In summary, guidelines may help clinicians make clinical practice more uniform and avoid over- or under-treatment. More population-based comparative effectiveness research is needed to help physicians make evidence-based decisions about the most appropriate care. Removing institutional, logistical, and financial obstacles to giving guideline-compliant care is important but may not reduce noncompliance much when the recommended treatments have significant potential side effects or even inconvenience. Further, guidelines rarely take patient wishes into account beyond certain points (e.g., whether the patient would rather have mastectomy or breast-conservation therapy). It is easier to measure whether particular treatments have or have not been done according to a guideline than to assess whether the patient’s values have been served. Nonetheless, some ways exist to help patients come to an informed decision when treatment options have different costs and benefits (10).