The mortality rate of lung cancer increases year by year (1,2). The annual diagnosis rate of new cases is approximately 1.6 million all over the world (3,4). About 85% of lung cancer patients are diagnosed as non-small cell lung cancer (NSCLC) (5). A total of 47.3% of NSCLC patients presented with metastases at the time of diagnosis (6). Distant metastasis is the leading cause of most cancer deaths. NSCLC metastasizes to the brain (47%), bone (36%), liver (22%), adrenal glands (15%), thoracic cavity (11%), distant lymph nodes (10%), and other organs (less than 5%), which leads to shorter survival (7,8). Metastasis seems to be a random process, which has not well qualified. Some researchers put forward an opinion that the oncogenic drivers, such as epidermal growth factor receptor (EGFR), anaplastic lymphoma kinase (ALK), and ROS1 proto-oncogene receptor tyrosine kinase, may induce the metastases (9-12). EGFR tyrosine kinase inhibitors (TKIs) are effective in treating NSCLC with EGFR mutation. However, some patients may have the mutation that substitutes methionine for threonine at amino acid position 790 (T790M) after being treated with first-generation TKI (13). T790M mutation inhibits first-generation TKI to its binding site, and the resistance to first-generation TKI arises. Some reviews have illustrated the relationship between T790M and the development of resistance to first-generation TKI (14,15). Whether patients with T790M mutation are more likely to have metastases remains unknown. In this study, we analyzed the time distribution of lung cancer distant metastases and the correlation between EGFR mutation, T790M mutation and lung cancer metastases.

We collected the data retrospectively from the clinical records of patients with lung cancer and metastases diagnosed at the Oncology Department of Shanghai Pulmonary Hospital. After admission, performed systemic bone image, brain MRI, abdominal MRI, or color Doppler ultrasonography, and chest computed tomography (CT) on patients diagnosed with lung cancer every six to eight weeks in case of metastasis. We enrolled a total of 681 lung cancer patients with EGFR mutant who had provided their written consent in the study. Among them, 316 patients from Feb 2001 to Dec 2016 were enrolled. After treating with first-generation EGFR TKIs, such as erlotinib and gefitinib, we observed T790M mutation in these patients. We also enrolled another 365 patients diagnosed from June 2018 to May 2019 who were all treated with the first-generation EGFR TKIs. However, unlike the last 316 patients, these patients did not get resistance to the first-generation EGFR TKIs when we analyzed the data. Their metastatic sites included the brain, liver, bone, contralateral lung, pleural, pleural effusion, adrenal gland, pericardium, abdominal cavity, subcutaneous tissue, and lymph nodes in the cervical, retroperitoneal, and inguinal regions. For analysis, besides the brain, the liver, and the bone, we divided the rest of the sites into two parts: intrapulmonary metastases (contralateral lung, pleural, pleural effusion) and other sites metastases (adrenal gland, pericardium, abdominal cavity, subcutaneous tissue, and lymph nodes). Some patients suffered from two or more metastases and were respectively analyzed in each metastatic site. We collected information from the diagnostic imaging, pathology reports, physician notes, and treatment information to identify the confirmed diagnosis date and the metastasis date. The study was conducted in accordance with the Declaration of Helsinki (as revised in 2013). The research was approved by Ethics Committee of Shanghai Pulmonary Hospital. The ethics reference number was NO K18-203.

We tableted data according to the information and used a histogram to visualize the distribution of the time between the confirmed diagnosis date and the metastasis date (metastasis time). Statistical analysis performed using SPSS 22.0 (SPSS Inc., Chicago, IL, USA). Enumeration data expressed as number were analyzed by Chi-square test. Statistical significance was considered as P value less than 0.05. 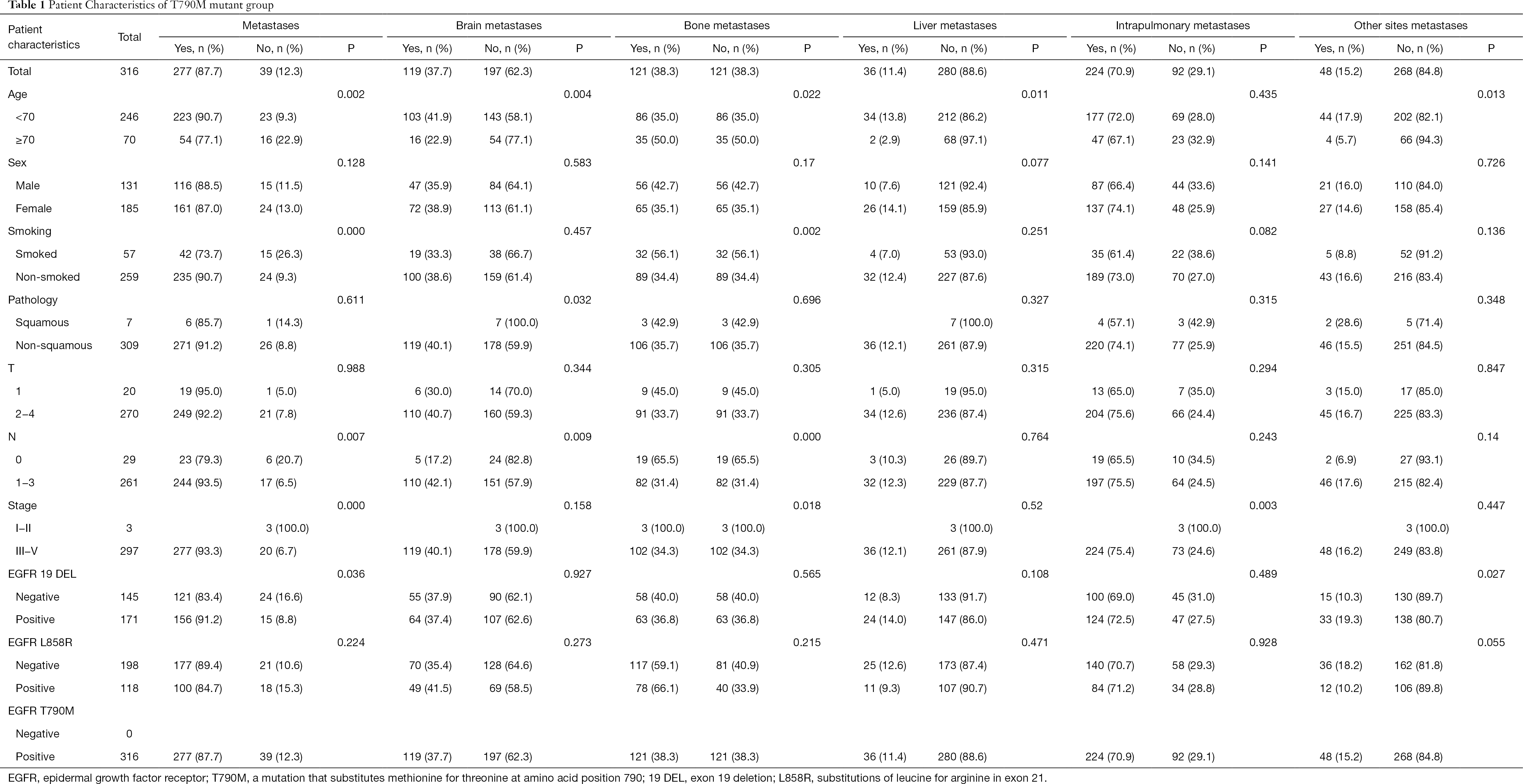 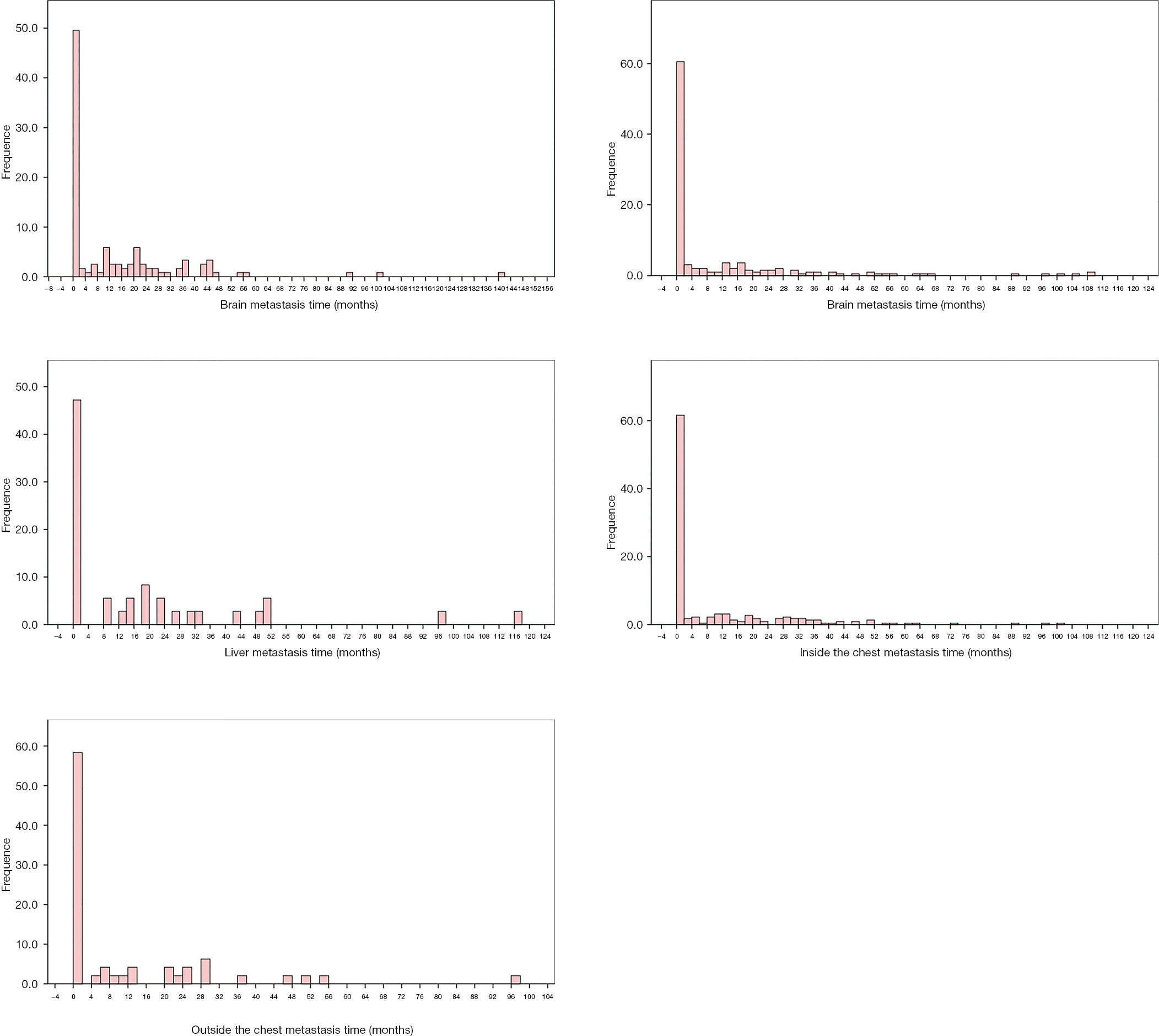 Figure 1 The distribution of metastasis time of different sites in T790M group. The metastases most happened before the diagnosis, suggesting that in patients with metastatic lung cancer, most metastases were detected at first diagnosis.

To find whether T790M is related to lung cancer metastases, we used the chi-square test to determine whether there was a difference between the T790M-mutant group and EGFR positive-mutant group.

The metastasis and the resistance against treatment make lung cancer the leading cause of cancer-related death. EGFR is one of the most essential driver genes in both pathological and cancerous processes (2,16). When EGFR binds to a ligand, the downstream signal is activated, mediating proliferation, migration, invasion and suppression of apoptosis (17). The overactivation and mutation of EGFR signaling were proved to be related to poor prognosis in lung cancer (18,19).

EGFR exon 19 deletion and L858R are driver mutations in NSCLC. EGFR TKIs are effective in treating EGFR positive lung cancer. Comparing with conventional cytotoxic chemotherapy, target therapy improved the overall survival (OS) and reduced the side effects of treatments in lung cancer patients with EFGR mutation (26). The median OS of advanced NSCLC patients treated with combination chemotherapy was 8 to 12 months, and the median progression-free survival (PFS) was 5 to 6 months (27-29). While treated with target therapy, the median OS was 20 to 30 months, and the median PFS was 10 to 14 months (10,30-34). Unfortunately, within a median period of 10–14 months, acquired resistance to first- and second-generation EGFR TKIs happened (35). The occurrence of EGFR T790M mutation in exon 20 was the most common mechanism of EGFR TKI resistance (36-38) Third-generation EGFR TKIs showed significant efficacy in preclinical studies for patients with T790M mutation (39-42). The use of target therapy had extended lung cancer patient life. The metastasis was an essential factor leading to poor prognosis of lung cancer patients with metastasis. Did the metastasis of lung cancer result from the longer lifetime of patients or the drive mutation? The results of our research might answer. From our results, wherever cancer metastasized, the time of metastasis largely concentrated before diagnosis or in the first two months after diagnosis. Even patient lives were prolonged, the metastases were happened before diagnosis or in the first two months after diagnosis. Although these patients all accepted the targeted therapy, the metastasis time seemed not to be related to the longer lifetime. Based on our research, we found that NSCLC patients with T790M had a higher incidence of metastases.

Despite these significant findings, there were also limitations in our study. First, our data were not large enough. Second, this was a retrospective study. Third, the mechanism of the correlation between T790M and metastases still needs more in-depth exploration.

For T790M-mutant patients with metastatic lung cancer, most metastases were detected before diagnosis or in the first two months after diagnosis, which certified that the metastases not related to the prolonged lifetime of patients or the use of target therapy. Moreover, NSCLC patients with T790M mutation had a higher incidence of metastases. We should conduct further studies to explore the mechanism of the correlation between T790M and metastases.

Conflicts and Interest: All authors have completed the ICMJE uniform disclosure form (available at http://dx.doi.org/10.21037/atm-20-2925). The authors have no conflicts of interest to declare.

Ethical Statement: The authors are accountable for all aspects of the work in ensuring that questions related to the accuracy or integrity of any part of the work are appropriately investigated and resolved. The study was conducted in accordance with the Declaration of Helsinki (as revised in 2013). The study was approved by Ethics Committee of Shanghai Pulmonary Hospital (NO.: NO K18-203). Written informed consents were obtained from the patients for publication of this study and any accompanying images.