In recent years, cancer immunotherapy has made significant progress with the support of a significant amount of funding (7-11). A study, funded by AstraZeneca reported that the clinical activity of durvalumab in patients with epidermal growth factor receptor (EGFR) + NSCLC with ≥25% of tumor cells expressing programmed death-ligand 1 (PD-L1) produced encouraging results (12,13). Results like the one above demonstrate how immunotherapy has fundamentally changed the treatment of patients with metastatic NSCLC (14). Research shows that PD-L1 is often highly expressed in NSCLC, which is a promising sign for patients with advanced lung cancer (15). The efficacy of immunotherapy alone, however, is considered to be limited, and many immunotherapy programs combined with targeted drug therapy have been included in clinical trials (16). The research goal for advanced NSCLC is to understand and solve the mechanism of drug resistance and refractory diseases and ultimately improve the cure rate.

All of the above-mentioned studies, and the issues they attempt to resolve, require considerable funding. The National Natural Science Foundation of China (NSFC) is the primary channel providing support for basic scientific research. The analysis of NSFC funding has become a valuable method for measuring the competitiveness in the basic research field, and can provide useful insights for researchers who wish to apply for scientific research funding. As the most advanced country in medical research, the United States, along with its primary medical agency, the National Institutes of Health (NIH), was also included in this analysis to enable a comparison of lung cancer research funding between China and the United States.

The information on the NSFC was retrieved from the network information system of the NSFC (https://isisn.nsfc.gov.cn/egrantindex/funcindex/prjsearch-list), the MedSci Natural Science Fund inquiry system (https://www.medsci.cn/sci/nsfc.do), and the inquiry system for scientific funding results in LetPub (https://www.letpub.com.cn/index.php?page=grant), with the keywords of “lung” and “lung cancer” for the period between 2008 and 2019. We wrote the corresponding web crawler code to integrate the search results into an excel table, and combined this with manual screening to obtain accurate project funding information. NIH funding information for the United States was downloaded from the NIH official website (https://report.nih.gov) with the keywords of “lung cancer” for the period between 2008 and 2020. We manually removed some items with incomplete information. The project name, person in charge, amount of funding, approval time, subject code, project approval number, application institution, and project type were included in our information table. Our study was conducted in accordance with the Declaration of Helsinki, and the Institutional Review Committee of Zhongshan Hospital (Fudan University, Shanghai, China) allowed this study to be exempt from ethical considerations because our study did not involve any patient’s information or animal experiment. The relationship between the frequency of corresponding keywords was analyzed by CiteSpace (5.3.R 8.12.30.2018).

The keywords of NSFC- and NIH-funded projects were obtained by using ROSTCM6 software to preprocess the data. They were successively imported into CiteSpace (5.3.R 8.12.30.2018) software for cluster analysis and word frequency analysis.

A total of 1,745 and 5,939 search results were finally obtained from the NSFC and NIH respectively. First, we analyzed the trend in the annual total funds and the number of projects funded by the NSFC and NIH in the field of lung cancer from 2008 to 2020. It can be seen from Figure 1 that the funding including funding amount and funding number of lung cancer between China and the United States is significantly different. Figure 1A shows the NSFC funding situation in China. The amount of NSFC funding projects in the field of lung cancer increased steadily from 2008 to 2012, but did not change much after 2012. The proportion of the number of projects funded in lung cancer among the number of all medical science projects between 2008 to 2019 was 1.72%, 1.49%, 1.03%, 1.81%, 2.09%, 1.89%, 1.92%, 2.17%, 1.86%, 1.47%, 1.94%, and 2.01%, respectively. NIH funding for lung cancer was significantly higher in even years than in odd years in the period between 2008 to 2018. Generally speaking, NIH funding in the United States decreased each while the opposite trend was seen for the NSFC in China. 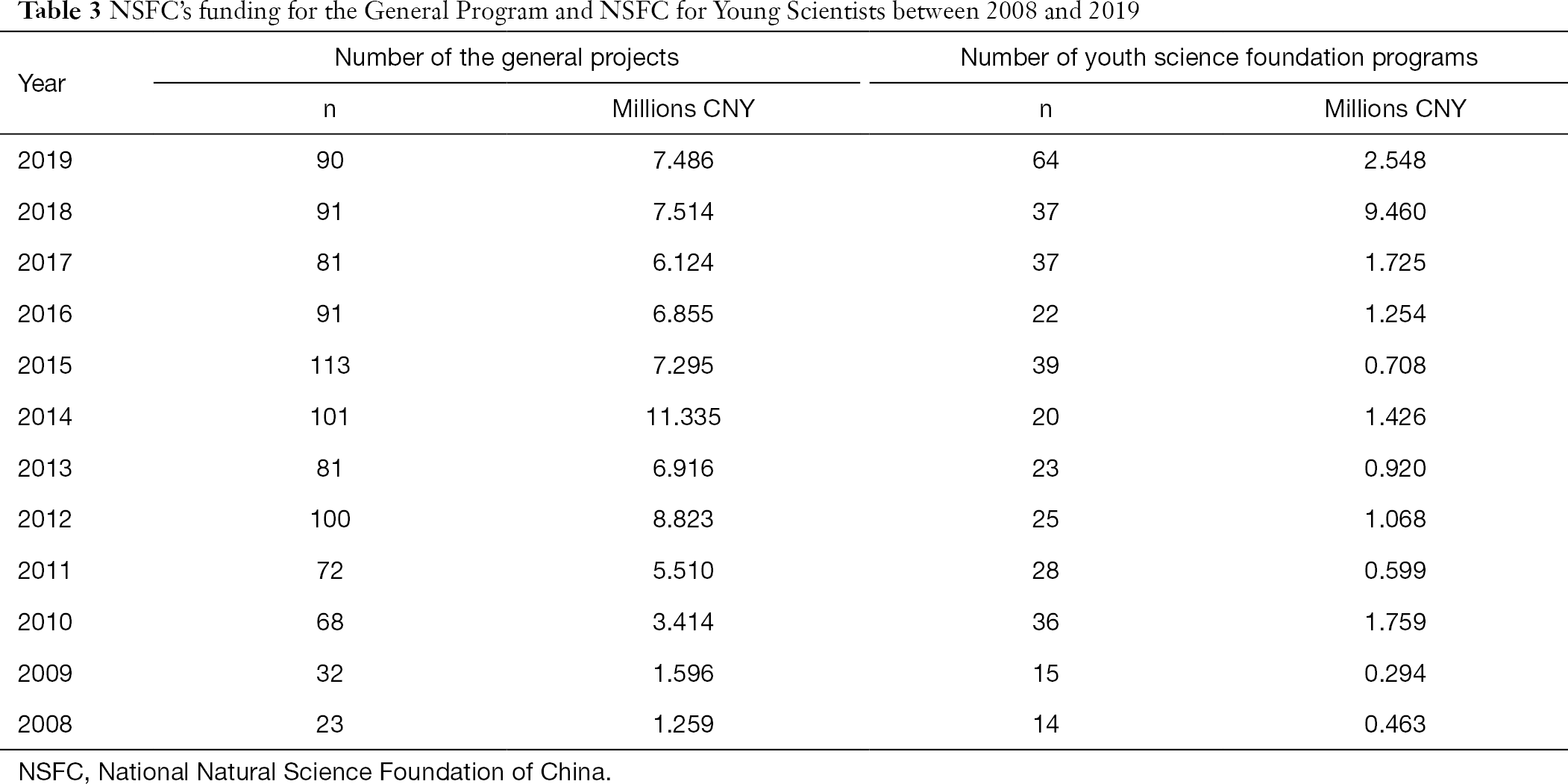 To explore the differences between China and the United States in the field of lung cancer research in the past 12 years, we analyzed the frequency of corresponding keywords and their relationship using the CiteSpace. We found that the basic experimental research of lung cancer in the past 12 years in the Chinese mainland included topics such as apoptosis, proliferation, invasion, metabolism, pathogenesis, cell signal transduction, epithelial-mesenchymal transformation (EMT), and immune-related research. In the clinical study of lung cancer, EGFR and KRAS gene mutations were the most frequently studied (Figure 2A, Table S1). Throughout the studied time period, the occurrence of lung cancer, EMT, and apoptosis were the main hotspots of research. Since 2011, the research on immunity-related to lung cancer, cancer cell metabolism, and EGFR inhibitors began to increase, while the research on long non-coding RNA (lncRNA), genomics, and KRAS gene mutations has started to grow in the past several years (Figure 2B). 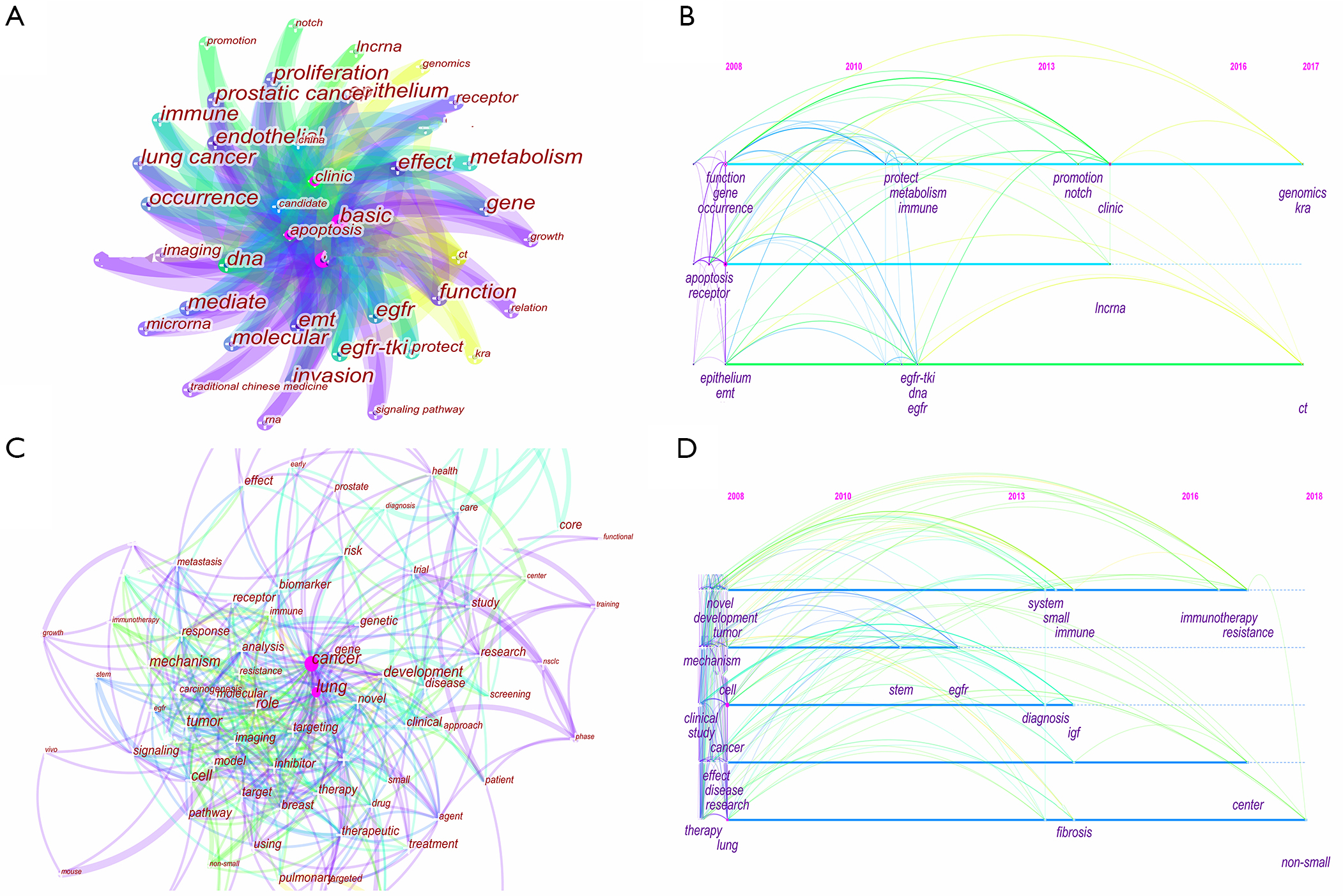 In recent years, significant progress has been made in lung cancer research, screening, and personalized treatment (precision medicine). Several diagnostic methods can be used to diagnose NSCLC, including X-ray, computed tomography (CT), and positron emission tomography (PET) imaging, and histological examination of tumor biopsy. Recent evidence suggests that low-dose CT screening can reduce lung cancer-specific mortality by 62 per 100,000 people per year (17). These methods have been improved through years of in-depth research on the clinical diagnosis and treatment of lung cancer. As our results show, in the past 12 years, both China and the United States have funded lung cancer imaging research, which is an essential support for the progress of the diagnostic imaging of lung cancer (18).

Patients with advanced lung cancer are usually not suitable for surgical treatment, and so both the NSFC and NIH have given considerable funding support to the exploration of other treatment methods for lung cancer (22-24). Radiotherapy and chemotherapy can still improve the survival of patients with advanced lung cancer. However, according to our analysis, traditional treatment methods for advanced lung cancer, such as radiotherapy and chemotherapy, are still somewhat funded, but the relative proportion of the funding has declined. Abandoning chemotherapy and using molecular targeted therapy or immunotherapy is the standard first-line treatment for about 50% of patients with advanced NSCLC (25). A greater understanding of the pathogenic genomic changes of NSCLC and the development of new drugs represent the progress that has been made in NSCLC treatment. A variety of targeted drugs have been proven to be effective in improving the long-term survival of patients. Several driving gene mutations have been identified, including EGFR and anaplastic lymphoma kinase (ALK), and research has begun to tackle the problems of acquired drug resistance (26-28). Curiously, NIH funding for lung cancer was significantly higher in evenly numbered years, but we have no convincing explanation for this phenomenon. We speculate that it may represent a balancing adjustment across different fields or the product of the response to feedback from the preceding year.

In the past 2 years, one of the most popular research areas in cancer treatment has been immunotherapy. Our results indicate that both the NSFC and NIH have provided significant funding to immunotherapy research in recent years. Because of the remarkable curative effect of immunotherapy targeting programmed cell death protein 1 (PD1)/PD-L1, it has attracted the interest of relevant researchers, and studies related to tumor immunotherapy have exploded in number in recent years (29,30). However, immunotherapy has some limitations. For example, immunotherapy is only applicable to a portion of patients and may involve adverse reactions (31,32). To solve these issues, considerable funding is required.

Our analysis of NSFC and NIH lung cancer research funding may inform those researchers who wish to apply for scientific research funding through a better understanding of their research environment. However, there may be some limitations to this study. For one, some funded projects were excluded, which might have led to some deviation in the results. Also, we did not track the research results of these funded projects, as this would have required an intensive workload, but this is worth exploring further.

In conclusion, while some differences may exist in the funding trends in lung cancer research between China and the United States, both countries have increased their support for immune-related research in recent years.

We would like to thank International Science Editing (http://www.internationalscienceediting.com) for editing the language of the manuscript.

Conflicts of Interest: All authors have completed the ICMJE uniform disclosure form (available at http://dx.doi.org/10.21037/atm-20-3957). The authors have no conflicts of interest to declare.

Ethical Statement: The authors are accountable for all aspects of the work in ensuring that questions related to the accuracy or integrity of any part of the work are appropriately investigated and resolved. Our study was conducted in accordance with the Declaration of Helsinki, and the Institutional Review Committee of Zhongshan Hospital (Fudan University, Shanghai, China) allowed this study to be exempt from ethical considerations because our study did not involve any patient’s information or animal experiment.