An aneurysm is usually a dilated vein that causes the lumen diameter to be larger than normal. It can occur in any vein of the whole body, most of which occur in the lower limbs. Most of the aneurysm have no symptoms at the early stage. When the aneurysm increases to a certain extent, it may compress the surrounding tissues or organs and appear a series of symptoms. For primary common iliac aneurysm, most of the previous literature focused on conservative treatment, and the aneurysm reported in the literature was not as large as that in this paper. The main highlight of this case is that the huge common iliac aneurysm was solved skillfully by surgical method without implantation of exogenous coated stent. Few cases of primary iliac aneurysms are reported in literature and our group has rarely dealt with this condition. As hemorrhagic shock and even death may result, the correct treatment of aneurysms is very important.

We present the following article in accordance with the CARE reporting checklist (available at http://dx.doi.org/10.21037/atm-20-8189).

A healthy 49-year-old male forest ranger underwent a computed tomography (CT) scan of the pelvis and abdomen after presenting with lumbago. He had no history of trauma or surgery; no chronic medical problems such as hypertension, diabetes, or heart disease; and denied having any heredofamilial vascular disease. A CT scan showed a round-to-oval shaped 4.5 cm × 6.5 cm lesion (Figure 1) and a duplex ultrasound and CT angiogram which reconstructed the left common iliac vein and surrounding structures, showed this to be an aneurysm (Figure 2). The patient was informed about the potential for thrombosis, embolism, or even spontaneous rupture after a more complete characterization of the vessel anatomy was obtained, and that surgery was required. Cardiac color ultrasound and laboratory test results were normal, except for a slight decrease in fibrinogen activity, which prompted hypocoagulability.

Figure 1 (A) The aneurysm is shown on a transverse view of the pelvis. (B) Reconstruction of the iliac vein shows aneurysm and compression of left iliac vein (arrow) near the right iliac artery.

All procedures performed in studies involving human participants were in accordance with the ethical standards of the institutional and/or national research committee(s) and with the Helsinki Declaration (as revised in 2013). The protocol was reviewed and approved by the Institutional Medical Ethics Review Board of the Taizhou Hospital of Zhejiang Province and the informed consent of the patient was obtained. The patient was placed in a supine position after anesthetization and a median abdominal incision approximately 20 cm long was made. The aneurysm was exposed through a retroperitoneal access simultaneously with the left iliac artery and left ureter (which was marked with a rubber band in case of injury during the operation), and the distal and proximal necks of the aneurysm were then blocked using a venous occlusion clamp before opening. A total of 5,000 units of normal heparin was used to prevent thrombosis before occlusion. Profuse amounts of dark red blood gushed out of the lumen of the aneurysm after it was opened. A portion of the diameter was then clipped using an auricular clamp in a parallel direction along the vein and then closed with a continuous suture of 5/0 Prolene. The aneurysm had obviously diminished after the second clipping using the above method. The postoperative course was uneventful without related complications and a CT angiogram (Figure 3), just before discharge, showed the vascular anatomy to be satisfactory. Follow-up for this patient is ongoing. 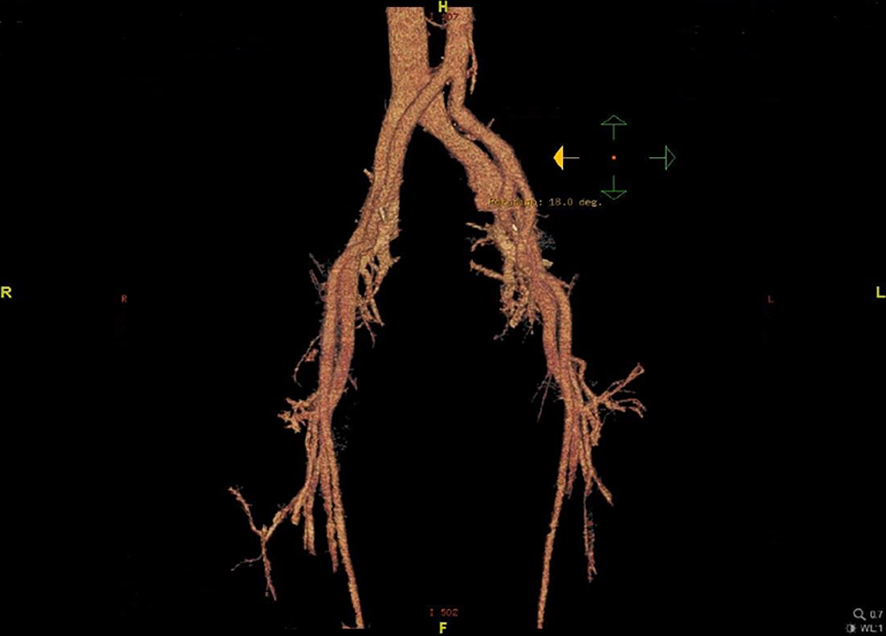 Figure 3 Reconstruction of the iliac vein 1 week after the operation showing the aneurysm had evidently decreased.

Venous aneurysms are rare vascular malformations that have been described in multiple locations including the iliac, popliteal, jugular, renal, and iliac veins, and the inferior vena cava (1-4), with the majority reported as being in the iliac vein. Most iliac vein aneurysms are secondary to a distal arteriovenous fistula that developed many years after a trauma. A review of the literature found only eight prior cases of primary aneurysms, which did not involve a history of traumatic arteriovenous fistula, pelvic surgery, or heredofamilial vascular diseases and none of these were reported by our patient. A unilateral iliac vein aneurysm was reported in six of the eight patients (5-10); five of which were on the left-hand side, and two of which were bilateral (11,12). Four patients were long-distance runners, as was our patient, with male and female patients represented equally. We believe that an iliac vein aneurysm associated mostly with the left side may be associated with iliac vein compression syndrome. The case of a young marathon athlete with bilateral external iliac vein aneurysms was reported in Alatri’s study (11). The authors speculated that endurance athletes with iliac vein compression syndrome have increased venous return which can result in aneurysm formation. Our patient is a forest ranger who stated that he walks more than ten kilometers each day and iliac vein compression syndrome was confirmed using CT angiogram during his hospitalization.

An iliac vein aneurysm that is asymptomatic in its early stages is usually detected only when it expands to the extent that it compresses local tissue. The coincidental finding of an iliac vein aneurysm has been reported in an asymptomatic 21-year-old woman who underwent diagnostic laparoscopy for a suspected adnexal cyst (5) and a man who underwent surgery for suspected appendicitis (7). In our case, the aneurysm was discovered by means of an abdominal CT for the investigation of lumbago. Once an iliac vein aneurysm is suspected, it can be diagnosed definitively through various methods, as there have been gradual improvements in diagnostic techniques in recent years. Duplex ultrasound is a convenient and noninvasive method that can also be used to diagnose venous occlusion and valvular incompetence. Ultrasound is also a useful tool for follow-up although it is limited because visceral organs can disturb its ability to detect aneurysms, especially those located deep in the pelvic veins. CT and MRI scans can characterize the anatomy of an aneurysm and its surrounding structural relationships. Our patient had a CT angiogram that played a significant role in the selection of the surgical approach and provided accurate anatomic localization before the operation.

There are relatively few reports regarding therapy for iliac vein aneurysms, and whether to or how to operate is highly controversial in patients who have been definitively diagnosed. There are many complications, such as thrombosis, local compression, and severe rupture of the aneurysm that may result in fatal hemorrhage, due to hemangiomatous dilation. In a single-center study Gillespie et al. found that 10% of patients with venous aneurysms had a deep venous thrombosis and 10% had pulmonary embolism (13) and Tannous et al. reported a mortality rate of 27% in 33 patients with spontaneous iliac vein rupture (14). The morphology of a hemangiomatoid dilation (contained saccular dilation or fusiform) is an important factor in deciding to operate. Humphries et al. (12) reported that a saccular aneurysm should be operated on as soon as possible as it ruptures more easily compared to the fusiform type. Our patient had a saccular aneurysm (12). Iliac vein aneurysms have traditionally been repaired via open surgical reconstruction using techniques that include ligation, tangential excision with lateral venorrhaphy, and resection with reconstruction by way of an end-to-end anastomosis or venous bypass. The first case of a primary iliac vein aneurysm was reported in 1989 and was that of a left, isolated aneurysm in a distance runner (6). The aneurysm was complicated with thrombosis and pulmonary embolism. The patient was treated with ligation without perioperative complications or recurrent thrombosis after 1 year. Banno et al. reported using tangential excision with lateral venorrhaphy in two asymptomatic female patients, which not only avoided corresponding complications associated with the implantation of artificial vascular grafts, but also retained venous integrity (9,10). Resection and reconstruction of the aneurysm using an off-side femoral vein was employed by Fourneau, while Ysa used artificial vascular grafts (15). The effect was reasonably satisfactory in both cases after 2 years of follow-up. Simple interventional techniques have been adopted for the treatment of iliac vein aneurysms with the development of endovascular technology in recent years (16). No corresponding covered stent or artificial vascular graft was used to reconstruct the vessel for the large vascular diameter aneurysmal neck in our patient. Single ligation, which may bring about the complication of thrombosis in the future, was considered not acceptable. We aimed to ultimately narrow the volume of the aneurysm as far as possible using tangential excision with lateral venorrhaphy. There are no unified standards for drug treatment in the perioperative period, and no prophylactic anticoagulant therapy was administered to our patient before the surgery. No venous thromboembolism was found in the intraoperative or postoperative periods, and only heparin was used for anticoagulation before occlusion of the aneurysmal proximal and distal necks. Follow-up is ongoing, and the specific effects are being further observed. At present, there is still no unified standard for the treatment of aneurysms. Personally, I think conservative treatment can be chosen for some small aneurysms in early stage, but close follow-up is needed. Surgical treatment is still recommended for some large aneurysms. Because we know that if an aneurysm ruptures, it can be life-threatening. If appropriate artificial blood vessels or coated stents are available, aneurysms resection combined with artificial blood vessel reconstruction or directly coated stents are good choices for aneurysms isolation. For some very large aneurysms, I personally think that lateral wall resection and suture of our aneurysms is also a method. However, the long-term effect needs to be followed up further.

A definitive diagnosis is recommended in patients with a suspected iliac vein aneurysm, with a CT angiogram being a dependable diagnostic method. Surgery should be performed as early as possible if the aneurysm is large or saccular in morphology. A reasonable surgical method should be selected based on the specific characteristics of the aneurysm and the patient.

Funding: This study was supported as a project of the Health and Family Planning Commission of Zhejiang Province (Grant No. 2016KYA192).

Reporting Checklist: The authors have completed the CARE reporting checklist. Available at http://dx.doi.org/10.21037/atm-20-8189

Conflicts of Interest: All authors have completed the ICMJE uniform disclosure form (available at http://dx.doi.org/10.21037/atm-20-8189). The authors have no conflicts of interest to declare.

Ethical Statement: The authors are accountable for all aspects of the work in ensuring that questions related to the accuracy or integrity of any part of the work are appropriately investigated and resolved. All procedures performed in studies involving human participants were in accordance with the ethical standards of the institutional and/or national research committee(s) and with the Helsinki Declaration (as revised in 2013). The protocol was reviewed and approved by the Institutional Medical Ethics Review Board of the Taizhou Hospital of Zhejiang Province and the informed consent of the patient was obtained.