Gestational diabetes mellitus (GDM) is defined as “diabetes diagnosed in the second or third trimester of pregnancy that is not clearly overt diabetes prior to gestation” (1-3). It is among the most common metabolic disease during pregnancy. The risks of severe complications, including cesarean delivery, shoulder dystocia, macrosomia, and even long-term negative effects on glucose tolerance in the offspring, are increased for pregnant women with GDM (4-6). Notably, women with GDM are also more likely to suffer from endothelial dysfunction, vascular injury, and even cardiovascular diseases (CVD), such as atherosclerosis (7). Therefore, a deeper understanding of the underlying mechanisms of endothelial dysfunction in GDM is critical.

Connexins are structurally related transmembrane proteins that assemble to form expression gap junctions and are named according to their molecular weight (e.g., Cx32, Cx40, and Cx43). Connexin 43 (Cx43) is expressed in almost every human organ and tissue, especially in the cardiovascular system (10), and is involved in various cardiovascular processes, including atherosclerosis (11,12). In our previous study, we preliminarily explained the importance of Cx43 in monocyte-endothelial adhesion (13-15). However, the mechanism of elevated Cx43 expression has yet to be elucidated. In the present study, we extracted human umbilical vein endothelial cells (HUVECs) from pregnant women with GDM for the first time, and found that Cx43 expression in GDM-HUVECs was substantially higher than that in normal HUVECs, which had an obvious effect monocyte-endothelial adhesion. More importantly, hyperglycemia was found to induce the overexpression of Cx43 in HUVECs. Therefore, we believe that hyperglycemia-induced overexpression of Cx43 is an important risk factor for vascular endothelial cell injury.

Cx43 acts as both a channel protein and as a regulatory protein. The long cytosolic C-terminus of Cx43 contains multiple domains involved in protein interactions, which allows Cx43 to interact with regulatory proteins such as proto-oncogene tyrosine-protein kinase Src (Src), protein kinase A (PKA), and protein kinase C (PKC) (16). PKA and PKC are critical in the phosphorylation of some gene regulatory proteins and the activation of specific gene transcription, such as the PI3K/protein kinase B (AKT) and NF-κB signaling pathways (15,17,18). From other aspects, both the PI3K/AKT and NF-κB signaling pathways can be activated by hyperglycemia (9,19,20). Thus, we speculated that Cx43 might play an important role in this process; namely that hyperglycemia results in an inflammatory reaction, including activation of the PI3K/AKT and NF-κB signaling pathways, the expression of its downstream adhesion-related molecules, and even monocyte-endothelial adhesion, all of which are the main research focuses in the present study (3).

This study was conducted in accordance with the Declaration of Helsinki (as revised in 2013) and approved by the Chinese Clinical Trial Registry (No. ChiCTR1900025456, registered 26 August 2019, http://www.chictr.org.cn/showproj.aspx?proj=42067). Informed consent was obtained from all patients. HUVECs were extracted from 30 pregnant women including 20 women who had a normal pregnancy and 10 women who had GDM. The patients ranged in age from 25 to 35 years old. The umbilical cord was collected from each patient after written informed consent had been obtained. The patients were screened in strict accordance with GDM diagnostic criteria (2). None of the patients had tumors, blood diseases, essential diabetes, other secretory diseases, contagious diseases, or severe liver or kidney diseases.

Primary HUVECs (normal HUVECs or GDM-HUVECs) were isolated from the human umbilical vein as described below and used between three and five passages (13,21). Sterile placentas and umbilical cords were collected after cesarean section and stored in phosphate-buffered saline (PBS) (Invitrogen, Carlsbad, CA, USA) at 4 °C within 2 h. The umbilical vein was cannulated on a super clean bench with a blunt 14-gauge needle clamped with hemostatic forceps. The vein was rinsed and drained, and then infused with 1% collagenase I (Sigma-Aldrich, St. Louis, MO, USA). Next, the full umbilical vein was placed in a water bath containing sterile double-distilled water (ddH2O) and incubated at 37 °C for 20 min. After incubation, the collagenase was collected, and the umbilical vein was washed twice with Media 199 Serum-Free Media (M199 SFM, Invitrogen) containing 10% fetal bovine serum (FBS; Invitrogen). Subsequently, the collected fluid was sedimented at 2,000 ×g at 37 °C for 10 min and then resuspended in M199 SFM (Invitrogen), containing 20% FBS (Invitrogen), 30 ng/mL recombinant human vascular endothelial growth factor (VEGF) (PeproTech, Rocky Hill, New Jersey, USA), and 100 U/mL penicillin-streptomycin (Invitrogen).

Both HUVECs and THP-1 cells were cultured at 37 °C in a 5% carbon dioxide (CO2) incubator at 90% humidity (Thermo Fisher Scientific, Waltham, MA, USA).

THP-1 cells were labeled with 5 µmol/L calcein-acetoxymethyl ester (Invitrogen) and cultured at 37 °C in a 5% CO2 incubator at 90% humidity for 30 min. The labeled THP-1 cells were washed twice with PBS (Invitrogen) and resuspended in M199 medium (Invitrogen). The HUVEC medium was removed and the suspended THP-1 cells (HUVECs: THP-1 cells =30:1) were added to the confluent monolayer. Then, the plates were put back into the incubator. After 3 h, the supernatant was removed, and the plates were washed with PBS and then carefully dried with filter paper. The adherent calcein-acetoxymethyl ester labeled THP-1 cells were counted using a fluorescence microscope (Thermo Fisher Scientific). Each dish was divided into eight quadrants. The middle position (200× visual field) of each quadrant was selected for counting, and the average was taken as the number of adherent THP-1 cells from each quadrant. 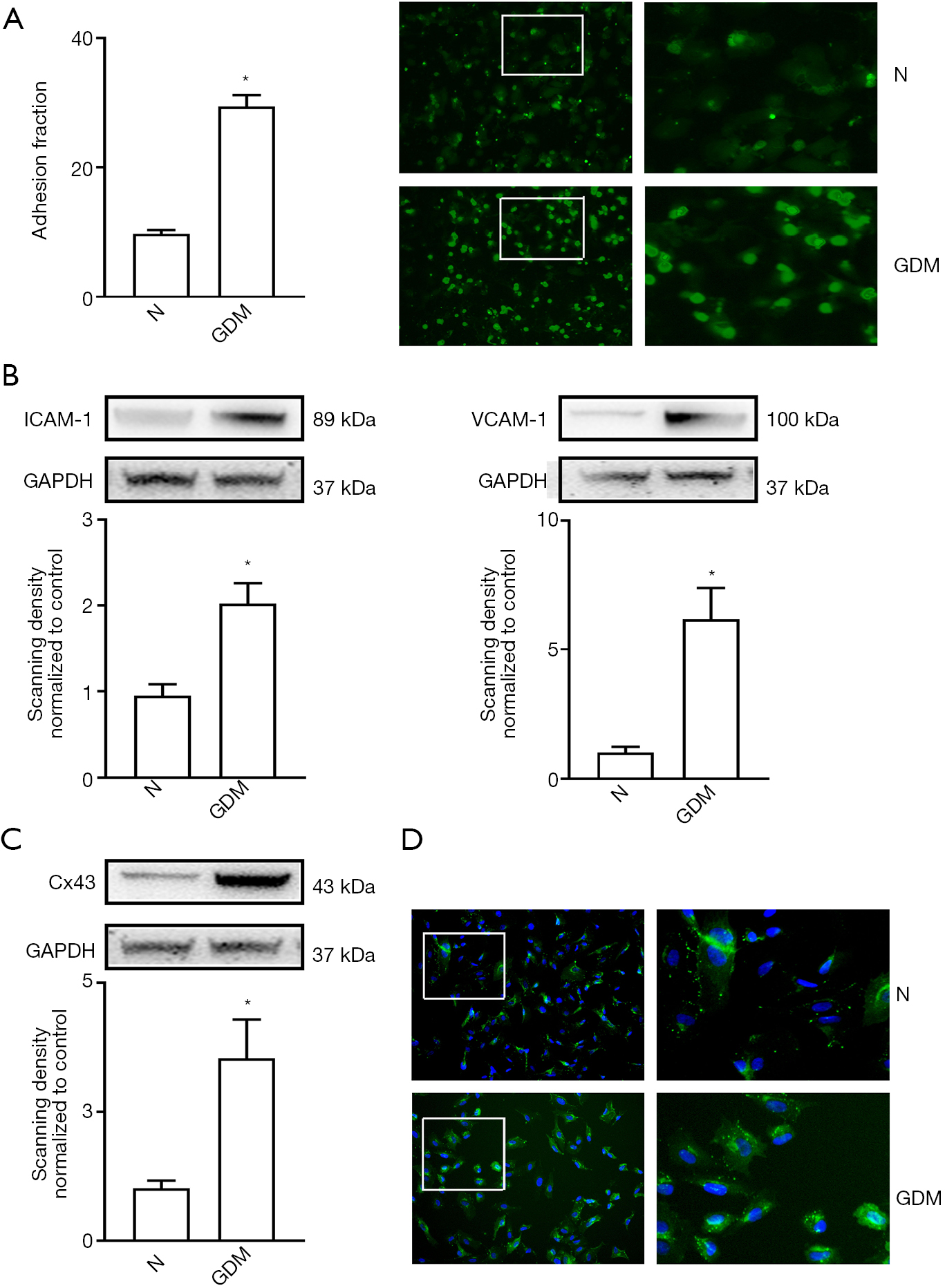 To confirm the effects of hyperglycemia on Cx43 expression and cell adhesion, the levels of glucose in the medium were changed. Exogenous glucose was used to simulate hyperglycemia. Figure 2A,B show that, when normal HUVECs were pretreated with high glucose (30 mM, 7 days), the expression levels of Cx43 and the adhesion-related molecules ICAM-1 and VCAM-1 were increased. In contrast, when GDM-HUVECs were pretreated with normal glucose (5.6 mM, 7 days), the levels of Cx43, ICAM-1, and VCAM-1 were decreased. Figure 2A,B also indicate that hyperglycemia could increase Cx43 expression in HUVECs. Furthermore, the tendency of THP-1-HUVEC adhesion was also consistent with the changes of Cx43, ICAM-1, and VCAM-1 expression in HUVECs (Figure 2C, P<0.05). 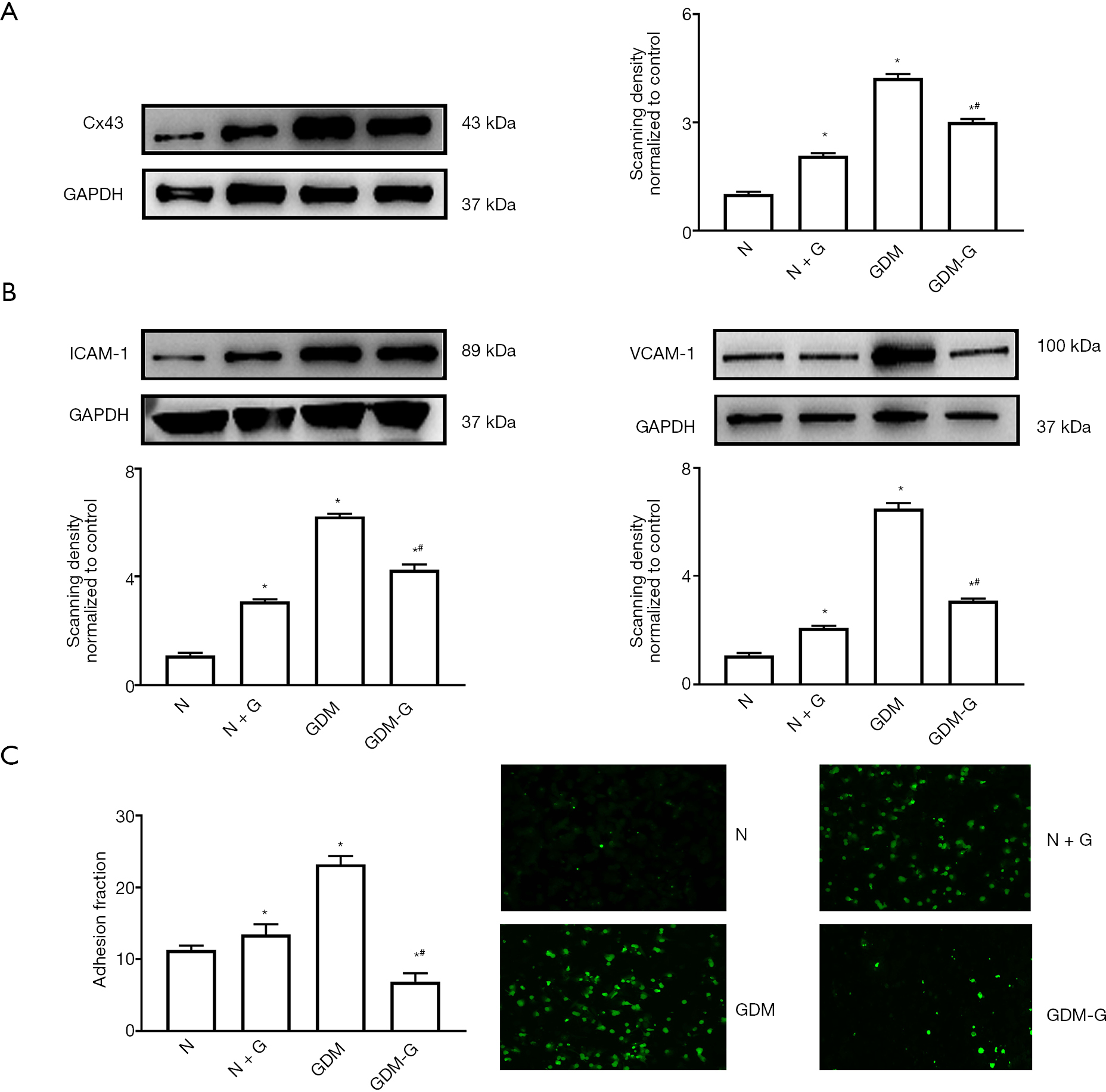 Two specific siRNAs (siRNA1 and siRNA2) targeting Cx43 were designed to knock down Cx43 expression in GDM-HUVECs. The results show that as Cx43 was knocked down specifically, hyperglycemia-induced cell adhesion, and ICAM-1 and VCAM-1 expression were markedly reduced (Figure 3A,B,C, P<0.05). Also, Figure 3D shows that these two siRNAs could also attenuate Cx43 expression in HUVECs induced by high exogenous glucose (30 mM, 7 days). More importantly, the increases in cell adhesion and ICAM-1 and VCAM-1 expression that were stimulated by exogenous high glucose (30 mM, 7 days) were observed to be decreased with the down-regulation of Cx43 (Figure 3D,E,F, P<0.05). 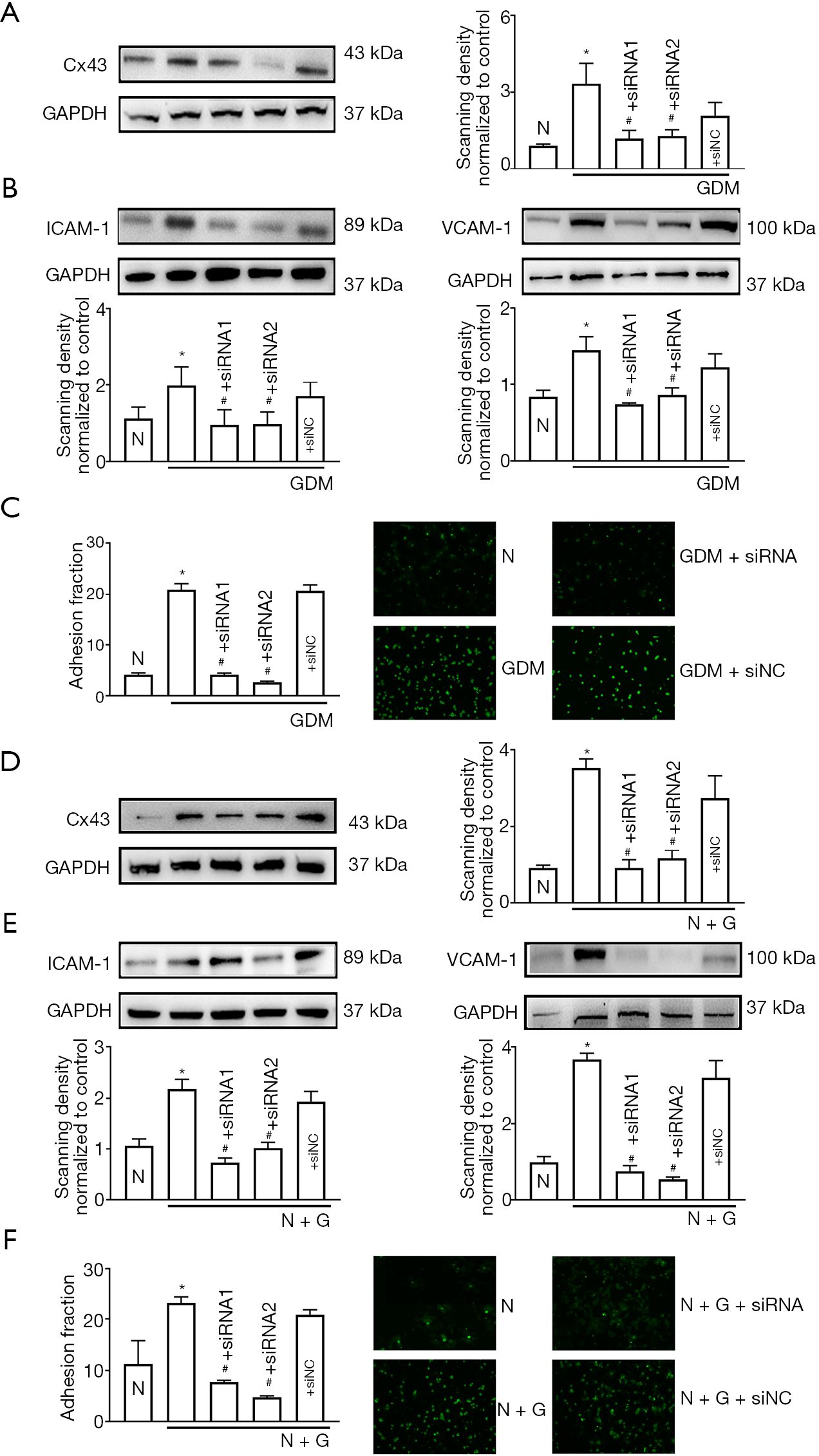 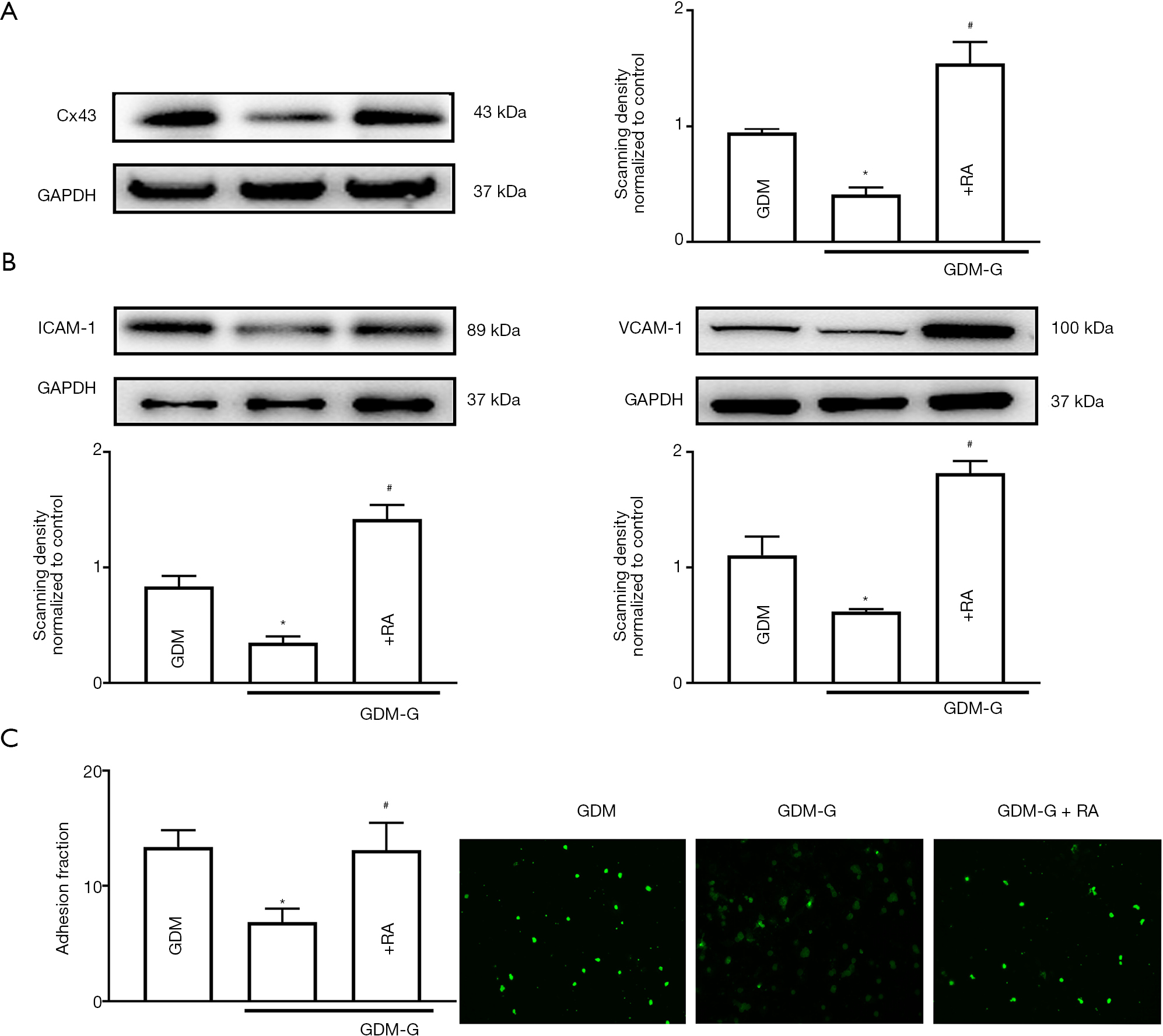 The results above (Figures 3,4) indicate that hyperglycemia could increase cell adhesion via the regulation of Cx43 expression in HUVECs. 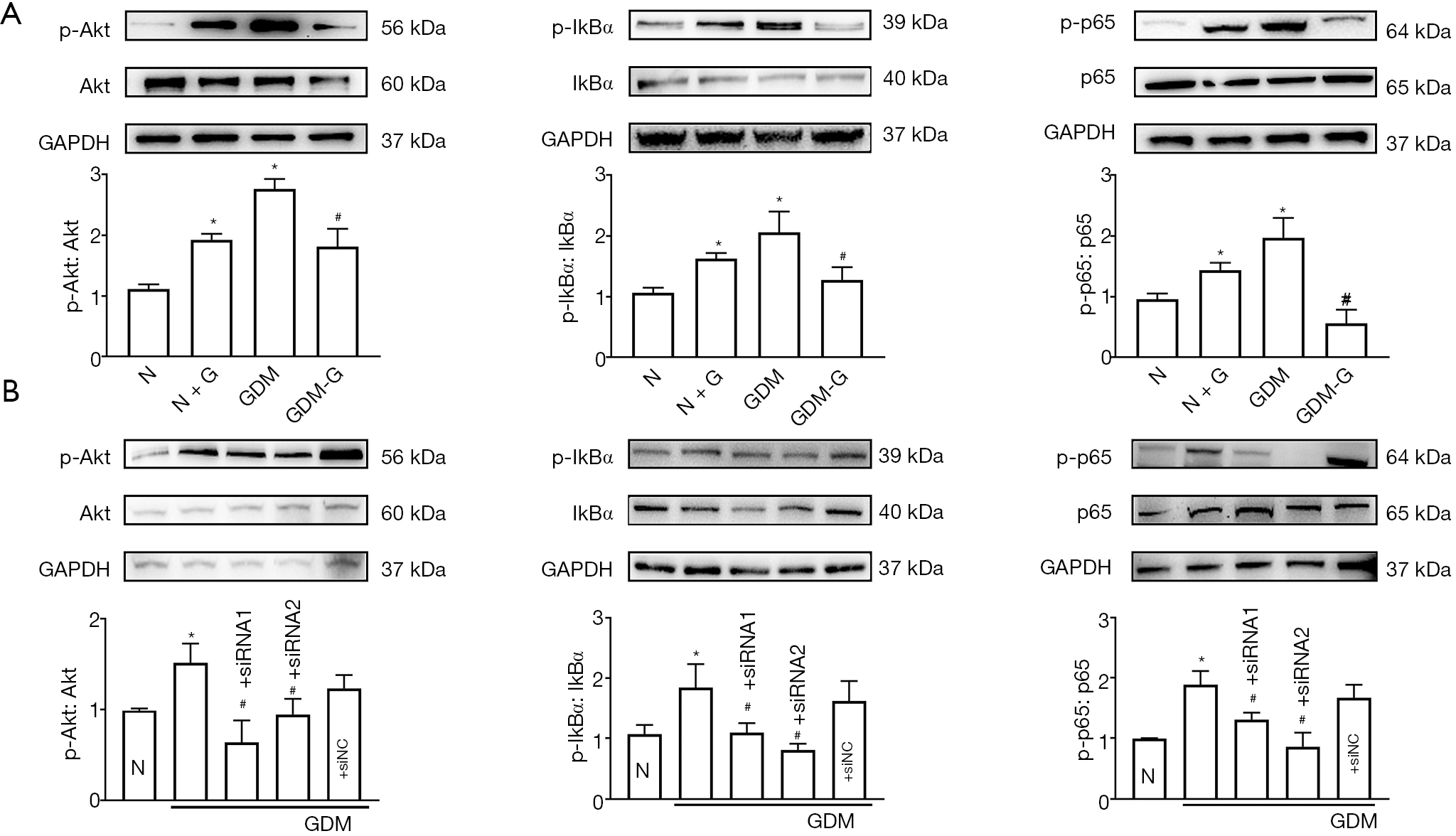 An EMSA using a biotinylated probe was performed to detect the transcription level of NF-κB. The results in Figure S1 show that hyperglycemia increased the combinative level between NF-κB and the promotor of ICAM-1 and VCAM-1. With the downregulation of Cx43 in GDM-HUVECs, the hyperglycemia-induced activation of the PI3K/AKT/NF-κB signaling pathway was reversed and the expression levels of p-AKT, p-IKBα, and p-p65 expression were reduced (Figure 5B). Coupled with the finding that hyperglycemia could up-regulate Cx43 expression (Figures 1,2), it can be concluded that hyperglycemia could influence the activation of the PI3K/AKT/NF-κB signaling pathway in GDM-HUVECs via Cx43. 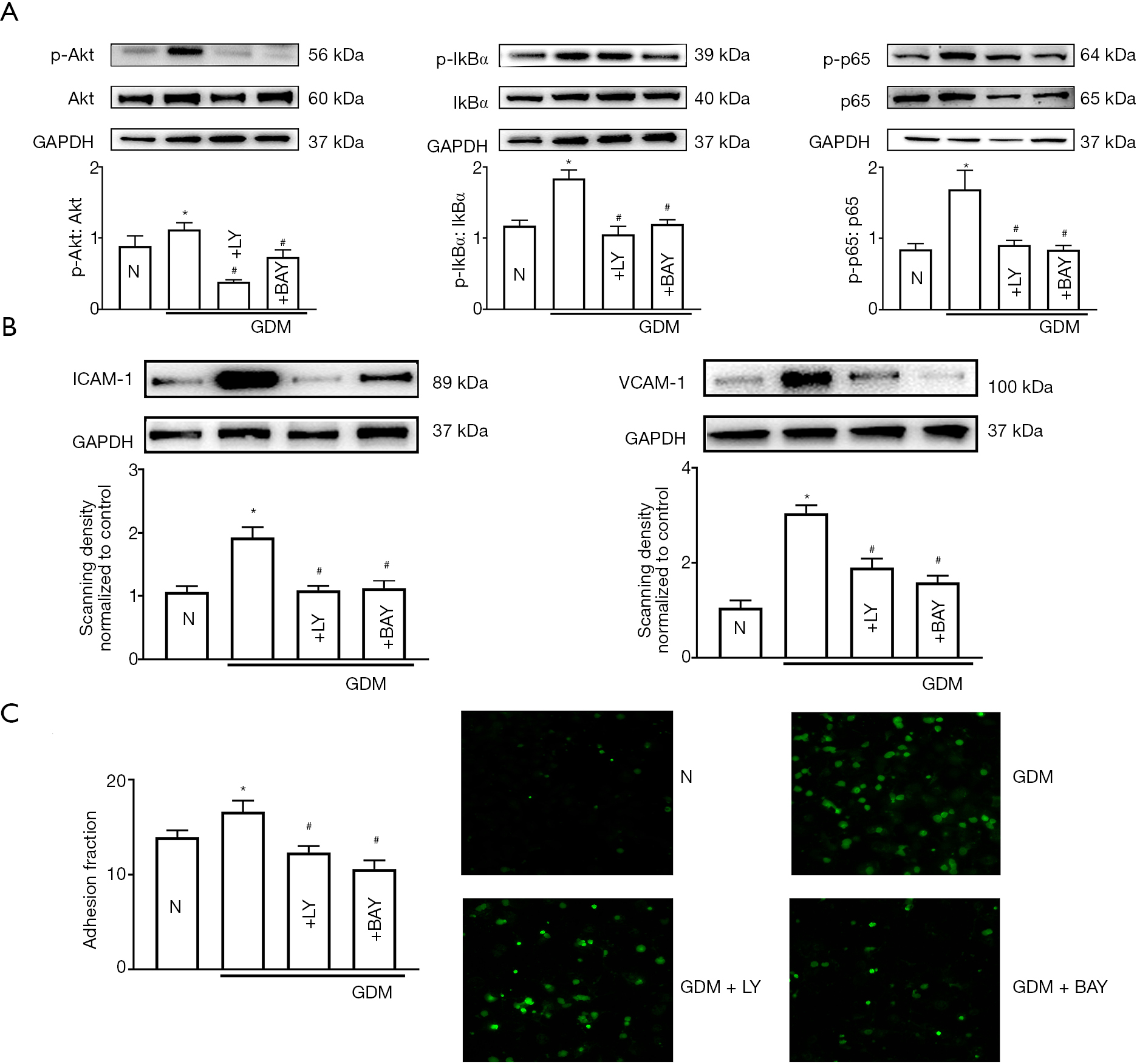 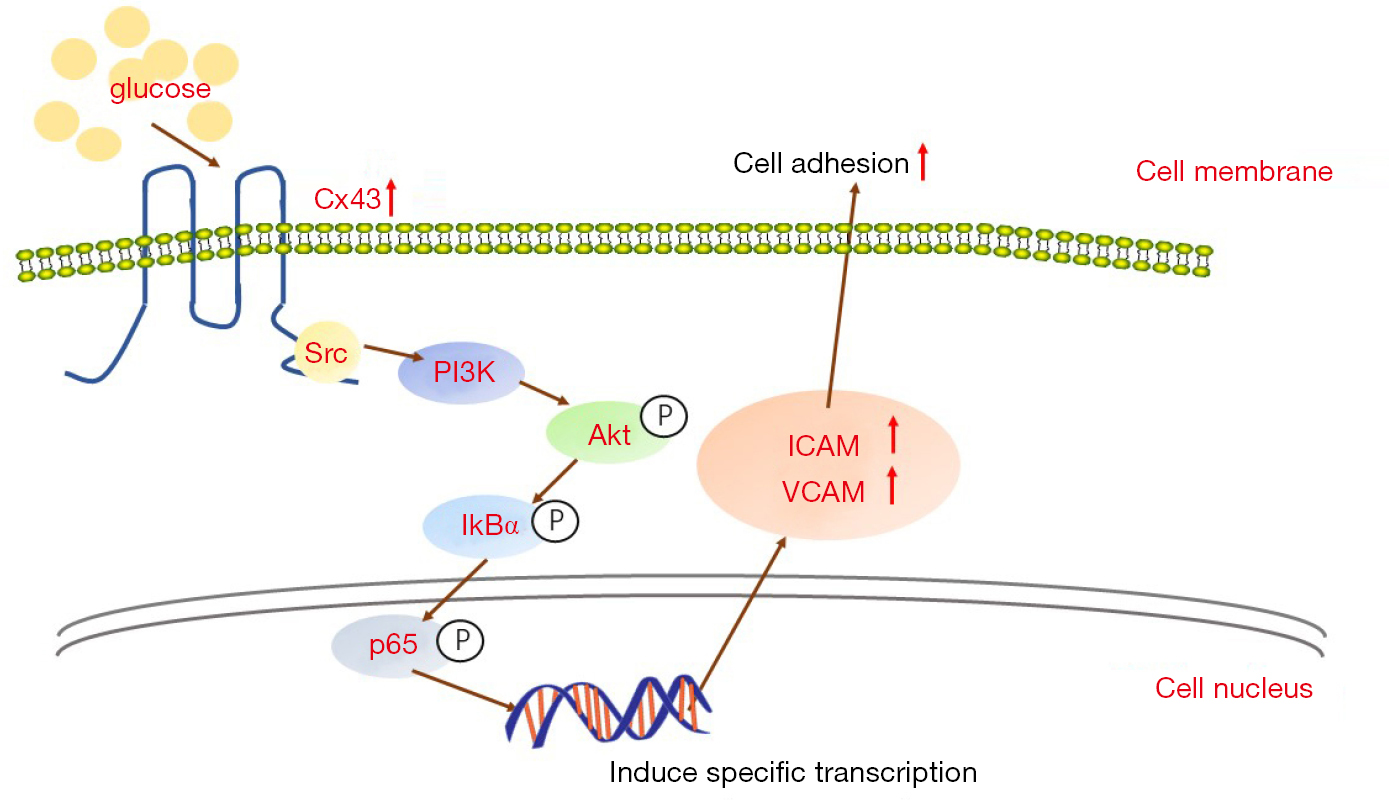 GDM is one of the most common metabolic diseases during pregnancy and poses significant health risks (22). Although the traditional complications that can affect mothers and fetuses have been studied extensively, the effects of GDM on monocyte-endothelial adhesion have not been explored and, therefore, were the key focus the present study.

Vascular inflammation and damage caused by hyperglycemia create favorable conditions for monocyte-endothelial adhesion (14). Adhered monocytes can lead to the activation of inflammation-related signaling pathways and the mass release of cytokines, which causes further deterioration of vascular injuries and the development of related complications, such as gestational hypertension, preeclampsia, thrombus formation, and fetal hypoxia (23,24). Therefore, we speculated that if monocyte-endothelial adhesion is inhibited, then vascular injury and further complications in GDM may be prevented. In our present study, we report for the first time that hyperglycemia-induced Cx43 expression in GDM-HUVECs is substantially higher than that in normal HUVECs. Cx43 overexpression can result in the activation of the PI3K/AKT/NF-κB signaling pathway and the increase of its downstream adhesion molecules, including ICAM-1 and VCAM-1, ultimately increasing monocyte-endothelial adhesion.

Currently, the understanding of Cx43 in hyperglycemia or diabetes is extremely limited; however, in recent years, it has attracted increasing attention. Mugisho et al. demonstrated that the inhibition of Cx43 could improve diabetic retinopathy. Furthermore, malfunctioning cardiac Cx43 signaling was found to play an important role in myocardial dysfunction in diabetic subjects, and the up-regulation of Cx43 in glomerular mesangial cells and diabetic mice was shown to ameliorate experimental diabetes-induced renal oxidative stress and fibronectin (27,28). For the first time, our research team clarified that Cx43 in hyperglycemia could induce monocyte-endothelial adhesion. Therefore, Cx43 might be a new potential target for the treatment of hyperglycemia and its related complications.

GDM and diabetes mellitus have been widely studied, and one of the most important pathological features is vascular injury (5). Monocyte-endothelial adhesion results in the deterioration of vascular damage, and is sometimes considered to initiate vascular damage (14). Thus, in this study, HUVECs were obtained from pregnant women with and without GDM to evaluate the effects of hyperglycemia on monocyte-endothelial adhesion. Based on our results, we conclude that Cx43 expression in HUVECs is significantly induced by hyperglycemia. This triggers the activation of intracellular PI3K/AKT/NF-κB signaling pathways, up-regulating the expression of ICAM-1 and VCAM-1, and ultimately resulting in greater monocyte-endothelial adhesion. Through our current investigation of Cx43, we not only provide a novel idea for the hyperglycemia-induced initiation of vascular endothelial injury, but also offer a new perspective regarding vascular damage in GDM.

Reporting Checklist: The authors have completed the MDAR reporting checklist. Available at http://dx.doi.org/10.21037/atm-19-4738

Conflicts of Interest: All authors have completed the ICMJE uniform disclosure form (available at http://dx.doi.org/10.21037/atm-19-4738). The authors have no conflicts of interest to declare.

Ethical Statement: The authors are accountable for all aspects of the work in ensuring that questions related to the accuracy or integrity of any part of the work are appropriately investigated and resolved. This study was conducted in accordance with the Declaration of Helsinki (as revised in 2013) and was approved by the Chinese Clinical Trial Registry (No. ChiCTR1900025456, registered 26 August 2019, http://www.chictr.org.cn/showproj.aspx?proj=42067). Written informed consent was obtained from the patients for publication of this study and any accompanying images.