Diabetic kidney disease (DKD), the most common micro-vascular complication of diabetes mellitus (DM), is the leading cause of chronic kidney disease worldwide (1-3). It is also the major cause of end-stage renal disease (ESRD) (4). DKD originates from metabolic dysregulation. Inflammation, endothelial injuries, fibroblast abnormalities and macrophages infiltration further contribute to disease progression (5). Based on the key molecular mechanisms underlying DKD, discovering novel biomarkers for the accurate kidney disease progression prediction is of great relevance.

Cluster of differentiation 90 (CD90), also known as Thy-1, is a glycosylphosphatidyl-anchored protein of the immunoglobulin superfamily. CD90 is mainly expressed on the surface of cells, such as mesenchymal stem cells (6-10). It is also present as a soluble form (sCD90), which is an enzymatically cleaved ectodomain of CD90 (11). CD90 mediates different kinds of fundamental cellular processes, and is involved in the progression of several diseases (12). CD90 was reported to play the regulatory role in cell differentiation, especially in mesenchymal stromal cells (MSCs) and MSC-like cells. These regulatory roles have been established both in experimental models and various human diseases (7,13,14). In particular, CD90 positive and CD90 negative mesenchymal fibroblasts showed different potential to differentiate into myofibroblasts and response to profibrotic cytokines. Dedifferentiation of tubular epithelial cells, perivascular MSC-like cells and pericytes contributes to further tubular injuries and renal fibrosis in DKD (15). Thus, whether sCD90 is associated with the disease severity and renal progression in DKD aroused our attention.

In this study, we evaluated the associations of sCD90 in urine and plasma with clinical parameters, and the prognostic value of sCD90 in predicting the progression of renal function in DKD. Moreover, the association between CD90 expression in kidneys and clinico-pathological parameters was assessed in patients with DKD. We present the following article in accordance with the STROBE reporting checklist (available at http://dx.doi.org/10.21037/atm-20-6528).

DKD patients were recruited from the C-STRIDE cohort (16). Inclusion criteria have been described previously (17,18). Complications with other known renal diseases were excluded. In total, we enrolled 285 DKD patients with regular follow-up to conduct the longitudinal study. We also collected urine and plasma samples from 29 DM patients without kidney injuries from the outpatient clinic of the Department of Endocrinology of our hospital. Patients with any other disease including connective tissue diseases, chronic kidney disease, hepatic dysfunction and malignancy, were excluded. In addition, patients who were on any concomitant medication other than anti-hyperglycemic drugs were excluded. Urine and plasma samples of 22 age- and sex-matched healthy donors were collected. These healthy controls did not have a history of hypertension, diabetes, cardiovascular diseases and renal diseases. None of them was under medical treatment. The blood and urine samples were treated as follows. The morning urine samples were pre-treated by centrifuge with 600 g and 5 min. Then the samples were transferred to the −80 °C refrigerator for further experimental tests. Blood samples in the ethylenediamine tetraacetic acid (EDTA) tubes were centrifuged at 3,000 g for 10 min at 4 °C. Then the blood samples were aliquoted and shifted into the −80 °C refrigerator.

Kidney biopsy samples were obtained from 30 patients with biopsy-proven DKD in Peking University First Hospital during 2017. DKD was diagnosed by the characteristic of pathological features, as previously described (19). Patients accompanied by other co-existing renal diseases were excluded. During the renal biopsy, clinical and laboratory data acquisition were accomplished. The control kidney samples (n=8) were from the healthy kidney poles of individuals, who received tumor nephrectomies without diabetes or other kidney diseases. All control kidney samples were confirmed by pathological examinations. The study was conducted in accordance with the Declaration of Helsinki (as revised in 2013). The study was approved by the Ethics Committee of Peking University First Hospital (Beijing, China) (No.: 2011[363]; 2017[1280]) and informed consent was taken from all the patients.

The recruitment details were shown in Figure 1.

The renal biopsy samples were detected and observed under light microscopy, fluorescent microscope and electron microscopy. Biopsy samples were evaluated by two pathology experts separately. These experts complied with the standard protocol for scoring renal biopsies of patients with DKD, and gave the final score within the blind method. The pathological findings of renal biopsies were classified as described previously (20).

Based on the previous research, estimated glomerular filtration rate (eGFR) was calculated (21). According to American Diabetes Association criteria, the albuminuria categorization status was categorized as described previously (22). Subgroup analysis was carried out to compare the level of sCD90 in different albuminuria statuses. The eGFR slope, and a composite endpoint of ESRD or 40% reduction of eGFR, were used to evaluate the renal progression of DKD. To estimate eGFR slope, the linear regression model was applied with no less than two eGFR data.

Detection of sCD90 and membrane-bound CD90

To assess the expression of CD90 in kidney, we performed immunohistochemistry. Briefly, paraffin-embedded renal sections were deparaffinized, rehydrated and heat mediated antigen retrieval was performed with citrate buffer (pH 6.2). Sections were blocked with 3% BSA buffer and stained with a monoclonal antibody against CD90 (Abcam, Cambridge, MA; 1:200 dilution). The stained sections were then incubated with peroxidase-conjugated secondary antibodies (ZSGB-BIO, China) and developed using DAB substrate (Millipore, Bedford, MA, USA). Image-Pro Plus was used to quantify the value of mean optical density.

For continuous variables, mean ± SD was used to express normally distributed, and median and interquartile range was employed to show non-normally distributed data. For categorical variables, data were expressed as absolute frequencies or percentages. Log2-transformed was used for data normalization. To compare the clinical parameters of two groups, an unpaired Student’s t-test or Chi-square test was used. For multiple comparisons, one-way analysis of variance (ANOVA) followed by Bonferroni correction was used. Pearson’s or Spearman’s test was explored for the correlation analysis. Cox regression analysis was performed to identify independent predictors of composite endpoints. Those factors, significantly associated with composite endpoints in univariable Cox regression (P<0.05), were entered in the multivariable Cox regression model. Results were expressed as hazard ratio (HR) with 95% confidence interval (CI). Statistical analyses were performed with SPSS statistical software (version 24.0; Chicago). The cut-off of P value is 0.05.

General data of patients with DKD

To evaluate the expression of CD90 in renal biopsy tissues, we enrolled 30 patients with renal-biopsy confirmed DKD. Among these 30 patients, 22 were male and 8 were female, with an age of 51.23±9.75 years at the time of renal biopsy. Most patients showed moderate to severe renal dysfunction, with an eGFR of 38.07±26.81 mL/min/1.73 m2 and proteinuria of 5.57±3.72 g/24 h. The clinical characteristics of these patients are listed in Table 2. 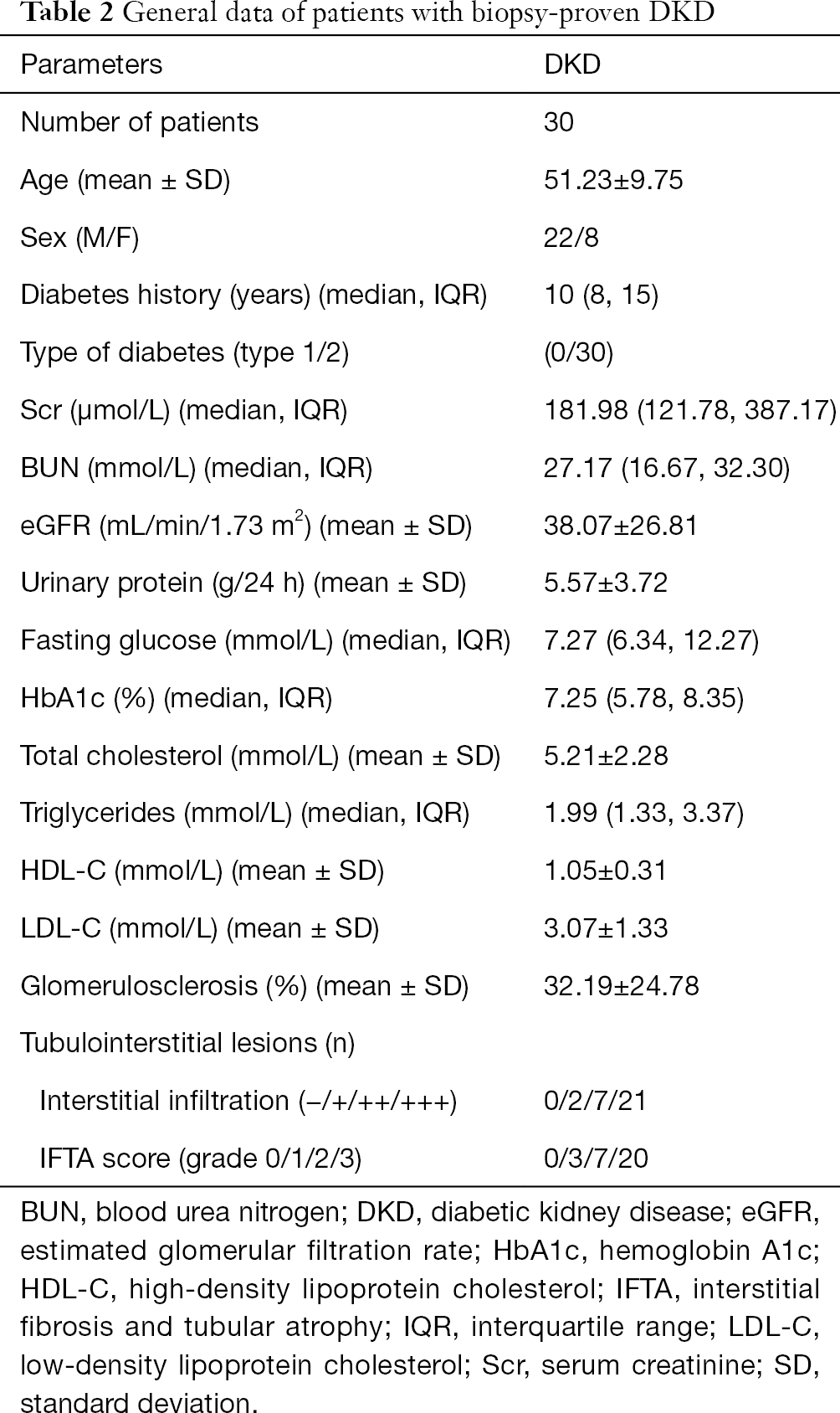 The levels of sCD90 in urine and plasma

Associations of urinary sCD90/Cr with renal outcomes in DKD patients 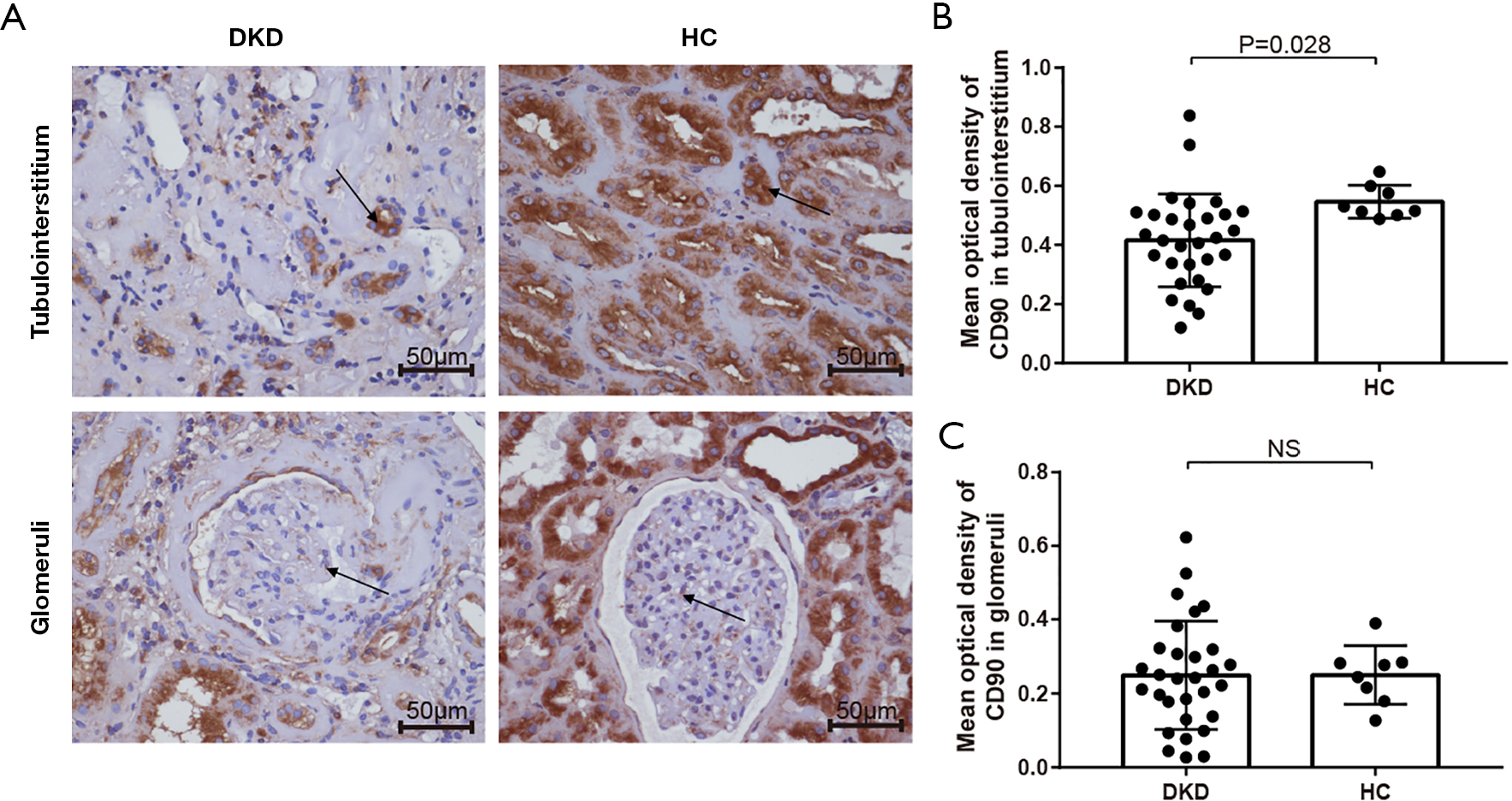 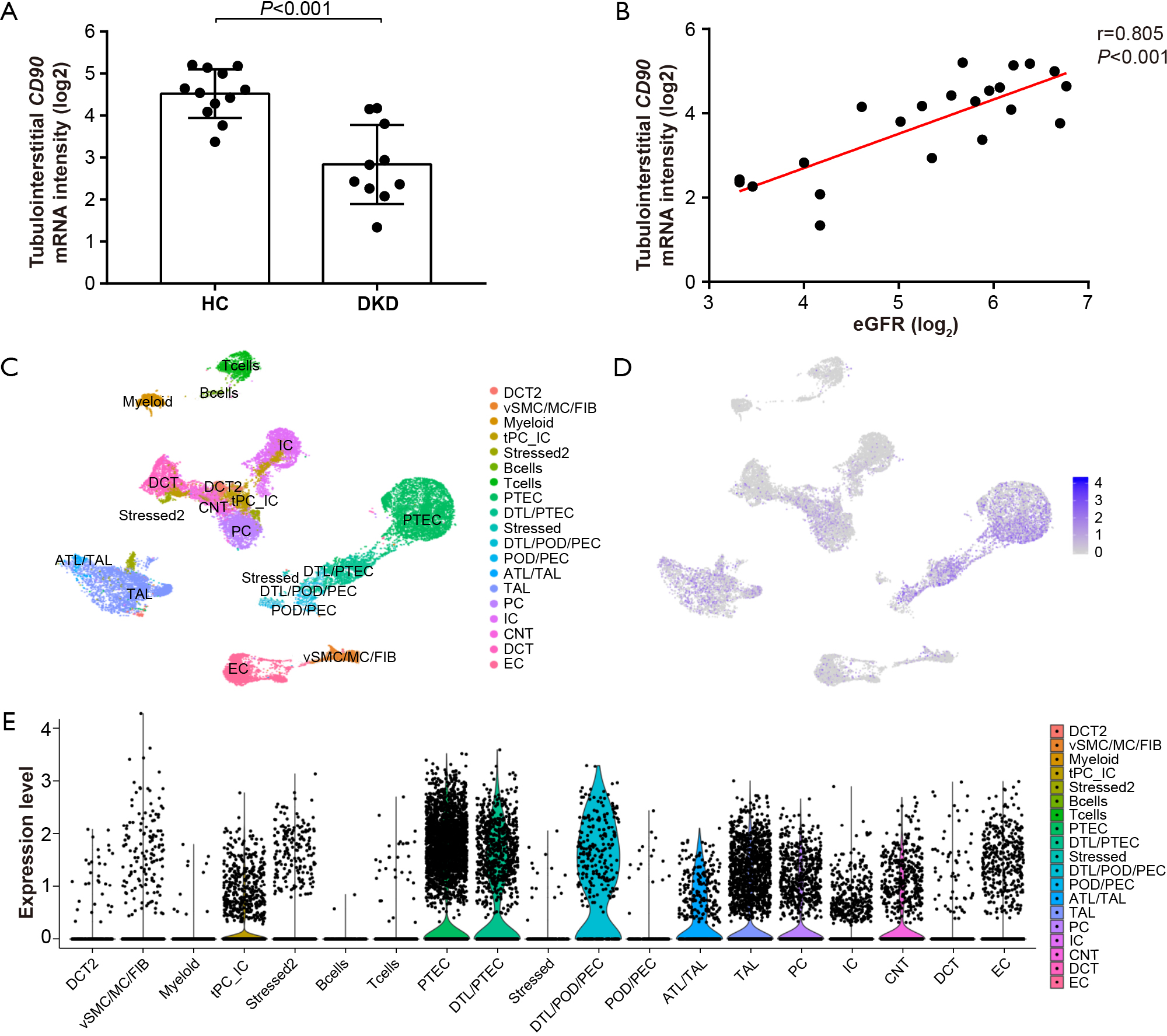 CD90, a highly conserved but somewhat mysterious molecule, exists in membrane-bound and soluble forms. It has been reported that CD90 plays a regulatory role in the differentiation of cells, especially in MSCs and MSC-like cells (7,13,14). However, the role of CD90 in DKD remains largely unknown. Here, we investigated the associations of urinary and plasma sCD90 with clinical parameters as well as renal outcomes in patients with DKD. In addition, we detected the expression of CD90 in the local kidney and assessed the association between the expression of CD90 in the kidney and clinico-pathological parameters in patients with biopsy-proven DKD.

Several studies showed a markedly elevated level of sCD90 at the local site compared with the serum of the same patient (24,25). In this study, we demonstrated that the plasma and urinary levels of sCD90 were significantly higher in patients with DKD compared with DM patients without kidney involvement and healthy controls. We also found that urinary sCD90 had a significant correlation with the disease severity of DKD. Cox regression analysis showed that male sex, uACR, HDL and LDL were independent risk factors for renal progression in patients with DKD, which was consistent with previous studies (26-28). More importantly, the level of urinary sCD90/Cr, but not plasma sCD90, at baseline was associated with the eGFR slope and was an independent predictor for renal outcomes of DKD.

Presumably, sCD90 is shed from the cell surface. In order to find the source of sCD90 in urine, we detect the expression of CD90 in the kidney. We observed a lower CD90 expression in the tubulointerstitial compartment of patients with DKD than healthy controls, while there was no significant difference in the glomerular compartment between DKD patients and healthy controls. Tubulointerstitial CD90 expression negatively correlated with urinary sCD90/Cr. Moreover, single cell RNA-seq showed that CD90 mRNA was highly expressed in proximal tubular cells and fibroblasts in living donors. These results suggested that the decreased expression of tubulointerstitial CD90 may be one of the major sources for the increased urinary sCD90 in DKD. Further correlation analyses demonstrated that the expression of tubulointerstitial CD90 significantly correlated with renal function, IFTA scores and glomerulosclerosis, but not with interstitial infiltration. Several studies demonstrated the role of CD90 in lung fibrosis. Loss of CD90 expression in fibroblasts correlated with lung fibrogenesis (29). An in vitro study demonstrated that profibrotic cytokines could stimulate CD90 fibroblasts, resulting in shedding of CD90 from the cell surface and thereby switching to a more activated myofibroblast phenotype (30). Thus, we speculate that urinary sCD90 might be cleaved from the surface of intrinsic renal cells under the circumstance of DKD. On the other hand, the decrease of CD90 expression in renal cells may further lead to cell phenotype change, which may participate in extracellular matrix remodeling and tubulointerstitial fibrosis (31).

This study has several limitations. First, the sample size was relatively small, which warrants further validation in a larger cohort. Second, patients enrolled in C-STRIDE cohort did not have the renal biopsy. Thus, we are not able to evaluate the association between renal pathological changes and the outcome in these patients with DKD. Thirdly, most patients enrolled in our study had advanced kidney disease. Whether urinary sCD90 could be a useful marker at all stages of DKD still need further investigation.

In conclusion, our study demonstrated that urinary sCD90 could reflect the disease severity and serve as a predictor of renal outcome in patients with DKD.

We would like to thank Dr. Qiaoqiao Zhu (The State University of New Jersey) for her help in polishing the language of our paper.

Funding: This study was supported by grants from the National Key Research and Development Program (No. 2016YFC1305405), two grants from the National Natural Science Fund (No. 82070748, 82090021, and 81425008), a grant from CAMS Innovation Fund for Medical Sciences (2019-I2M-5-046), and a grant by the University of Michigan Health System and Peking University Health Sciences Center Joint Institute for Translational and Clinical Research (No. BMU2017JI001). Additional support was provided by Innovation Fund for Outstanding Doctoral Candidates of Peking University Health Science Center (71013Y2029) and the George M. O’Brien Michigan Kidney Translational Core Center, funded by NIH/NIDDK grant 2P30-DK-081943.

Reporting Checklist: The authors have completed the STROBE reporting checklist. Available at http://dx.doi.org/10.21037/atm-20-6528

Conflicts of Interest: All authors have completed the ICMJE uniform disclosure form (available at http://dx.doi.org/10.21037/atm-20-6528). The authors have no conflicts of interest to declare.

Ethical Statement: The authors are accountable for all aspects of the work in ensuring that questions related to the accuracy or integrity of any part of the work are appropriately investigated and resolved. The study was conducted in accordance with the Declaration of Helsinki (as revised in 2013). The study was approved by the Ethics Committee of Peking University First Hospital (Beijing, China) (No.: 2011[363]; 2017[1280]) and informed consent was taken from all the patients.